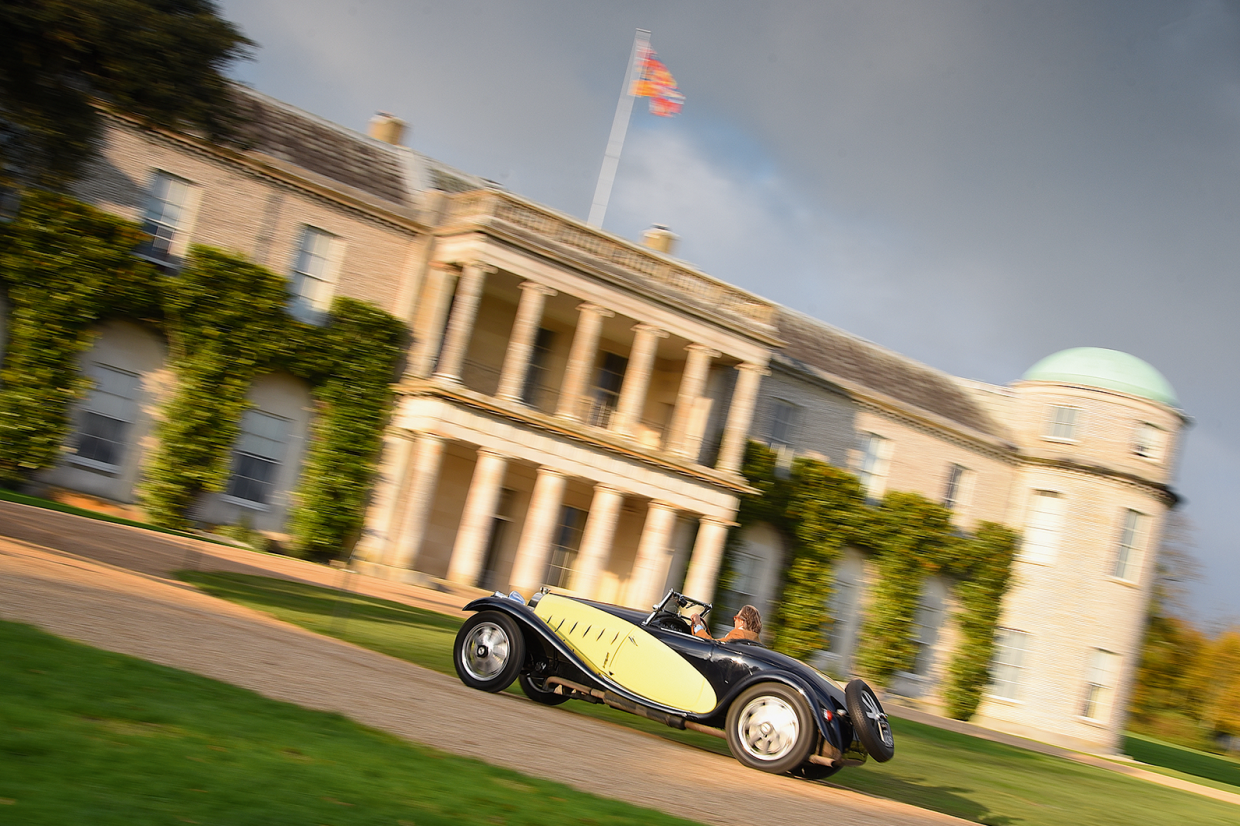 Christmas has just come early for me. A couple of weeks ago the Steering Committee, my ever-loving spouse, gave me a copy of a wonderful car book she had just found on Amazon, and instead of keeping it to solve the usual Yuletide problem, she handed it over straight away.

It’s called The Automobile Book, written by the late American author Ralph Stein, and published by Paul Hamlyn from 1962.

She had read about it because the Duke of Richmond, of Goodwood fame (pictured above driving a Bugatti Type 55), had cited it in an article as the book that most influenced him as a young enthusiast. I now see how and why, in spades.

Incredibly, this book not only tackles the ridiculously difficult job of summarising where cars were ‘up to’ in their century (yes, century) of gestation to 1962, it also articulates brilliantly why people like us love them so much.

You can still find decent Amazon copies for £20, but my wife paid more for mine because it’s in superb nick, with a faultless dust jacket, and she cares about things like that. 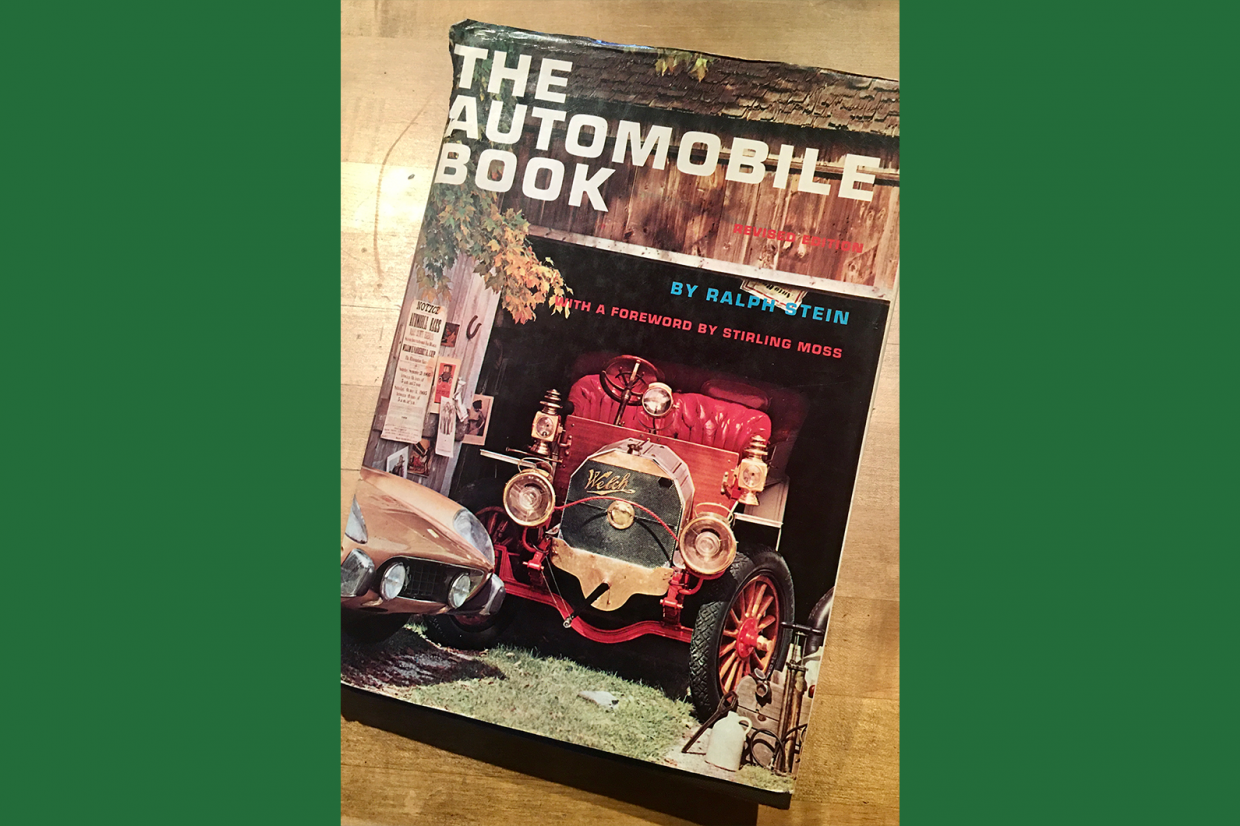 Stein’s first 29 words of preface instantly show the alacrity and joy with which he tackles his enormous task: ‘This is a book for people who like the motor car,’ he writes, ‘any kind of motor car. New cars, old cars, sports cars, steam cars, good cars, even bad cars.’ My new ‘second revised’ copy is a hardcover tome running to 318 pages, enclosing at least 1000 expertly chosen and captioned photographs and illustrations. By a mile, it is the most uplifting car book I have ever read.

I’ll go further. I’d cite The Automobile Book as the only single volume I’ve ever known that, if carefully digested by an enthusiastic newcomer seeking accurate knowledge and context, would largely make up in a few days for years of accumulated knowledge and experience.

Not only is it packed with fascinating information, it is written with a wonderful, simple optimism that only a very few motoring writers have ever managed to convey. Were Ralph Stein still with us (he was a writer and illustrator for The New York Times who died at 85 in 1994), I would have dashed off several fan letters by now. And were my house to catch fire tonight, this book would be tucked under my arm as I ran for my life.

The foreword is by Stirling Moss, whose career had ended at Goodwood that Easter, and it is a little routine in tone: in those days the great man must have spent half his life writing forewords for car books.

He rattles off details of victories (leaving out, interestingly, the 1955 Mille Miglia) and tells us that, currently, his cars are a Lotus Elite and a Mini Cooper.

But in the last few lines he gets down to business: ‘It is probably because cars today are so reliable and easy to drive,’ he writes, ‘that more and more people are becoming interested in the rare and exotic machinery so beautifully portrayed in his book.’

Mind you, one of the joys of The Automobile Book is that it talks with equal joy about common cars as those from rarified realms.

The successive chapter headings give a flavour of the author’s enthusiasm: they include ‘The Fire Chariots’, ‘Electric Cars & Steamers’, ‘The Grand Marques’, ‘Sports Cars’, ‘Grands Prix’, ‘Links with the past’ and, fascinatingly, ‘The Future’. 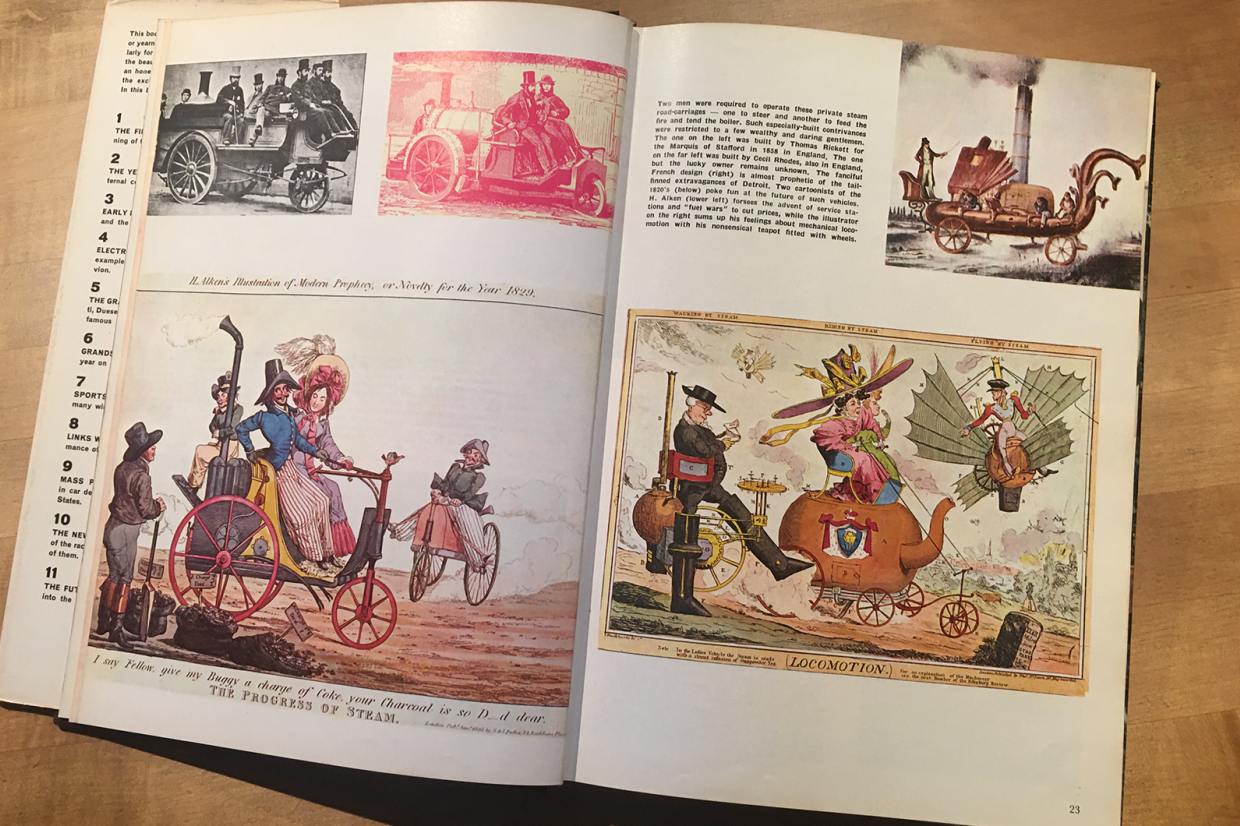 As you begin to read (I did chapters at one-a-night), your fascination builds. Stein talks about tackling his wide variety of subjects with ‘a brush necessarily broad’, but always gets to the nub.

One early caption jumped out as an example of the author’s genius for putting things into context: ‘Steam locomotion was a subject for sarcasm and hilarity in the 1820s’.  And it is filled with such gems.

He celebrates the achievements of a Jewish resident of Mannheim, Siegfried Marcus, who had built a two-stroke powered hand-cart by 1865, but he was the kind of guy who lost interest in his inventions once he’d proved they worked.

The Nazis found his achievements inconvenient to history, preferring to credit Daimler and Benz, who followed their inventions to more logical conclusions, for the motor carriage.

Still, consider this lovely description of one of Marcus’ discovery milestones: ‘He was fascinated by the idea of electric lighting,’ writes Stein, ‘and got the idea that perhaps benzene vapour ignited by an electric spark would make a beautiful light. It didn’t. It made a beautiful explosion.’ 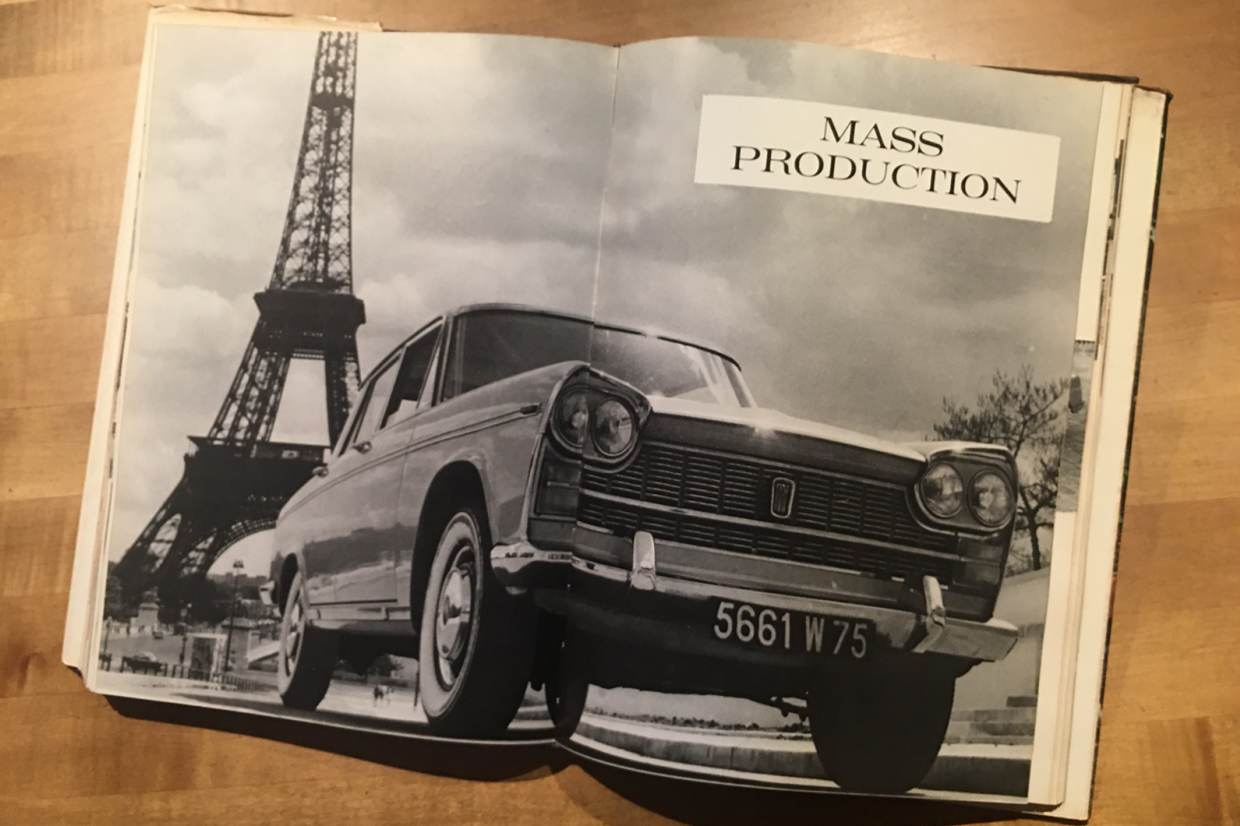 On we stroll companionably with Ralph Stein through history, with his clarity of mind putting things into context the way few could then or now.

Here he is discussing the cars of the post-WW1 period: ‘By 1920 the US was making, with few exceptions, two million of the stodgiest, most uninteresting cars the world had ever seen. When Europe got back on its feet, we would see exciting motor cars again…’

That preference for more advanced, more delicate European cars becomes a theme you just can’t miss. Here’s the author talking about MG’s pioneering role in bringing sports cars to Americans. ‘It was, of course, the MG TC that started it. Dainty as a button, lively, its handling was a revelation to Americans resigned to the slow and mushy steering of the barge-like cars they were used to…’

When this book was new the Mini was a few years old, the Lotus Elan and Jaguar E-type had just been launched, and Sir William Lyons’ car-building philosophy had become well known and appreciated worldwide.

‘Since the war Jaguars have adopted the philosophy of making elegance and performance doubly attractive by not charging the earth for their products,’ he explains. 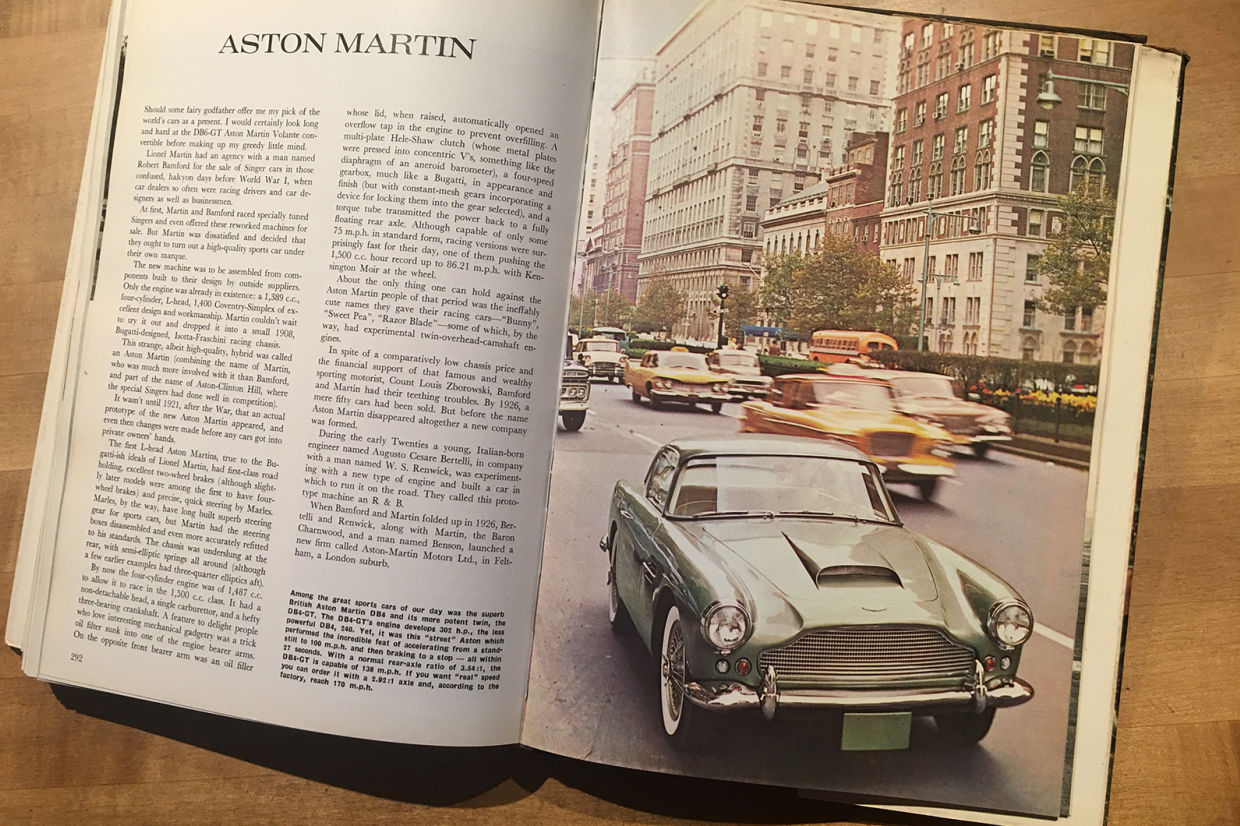 Perhaps the best comes last: ‘The Future’. Stein breezily sums up what tomorrow will be like. Even cheap cars will get unitary body construction, engines will be made of aluminium, disc brakes will be universal, and transmissions (even automatics) will become ‘transaxles’ and move rearward for weight distribution.

Gas turbines will get a better chance to prove themselves in road cars (as they had been doing in Le Mans Rovers), and a few crazy people will keep talking about flying cars.

Electric cars will fascinate, writes Stein, and would already have a life of their own ‘if only someone would invent an ultra-light, powerful, quickly rechargeable battery.’ How appropriate those words still are today, 60 years later.

In summary, this is one of the most uplifting books I have ever read. I know that in future, seeking inspiration for my own meagre efforts, I’ll open it anywhere, read a few sentences and remember what good writing is supposed to sound like.

Unsurprisingly, though the reviewers of the time were enthusiastic about The Automobile Book, they patently lacked Stein’s ability to turn a gladdening phrase. ‘A must for any enthusiast,’ wrote The Autocar with consummate stodginess. ‘Motoring memories richly catered for,’ wrote The Guardian in a weirdly twisted description.

Only long-departed Car Mechanics, an organ you might expect to be a source of vivid writing, was truly spot on. ‘Unreservedly the finest book on the motor car produced,’ wrote its insightful reviewer. I’ll happily go with that.