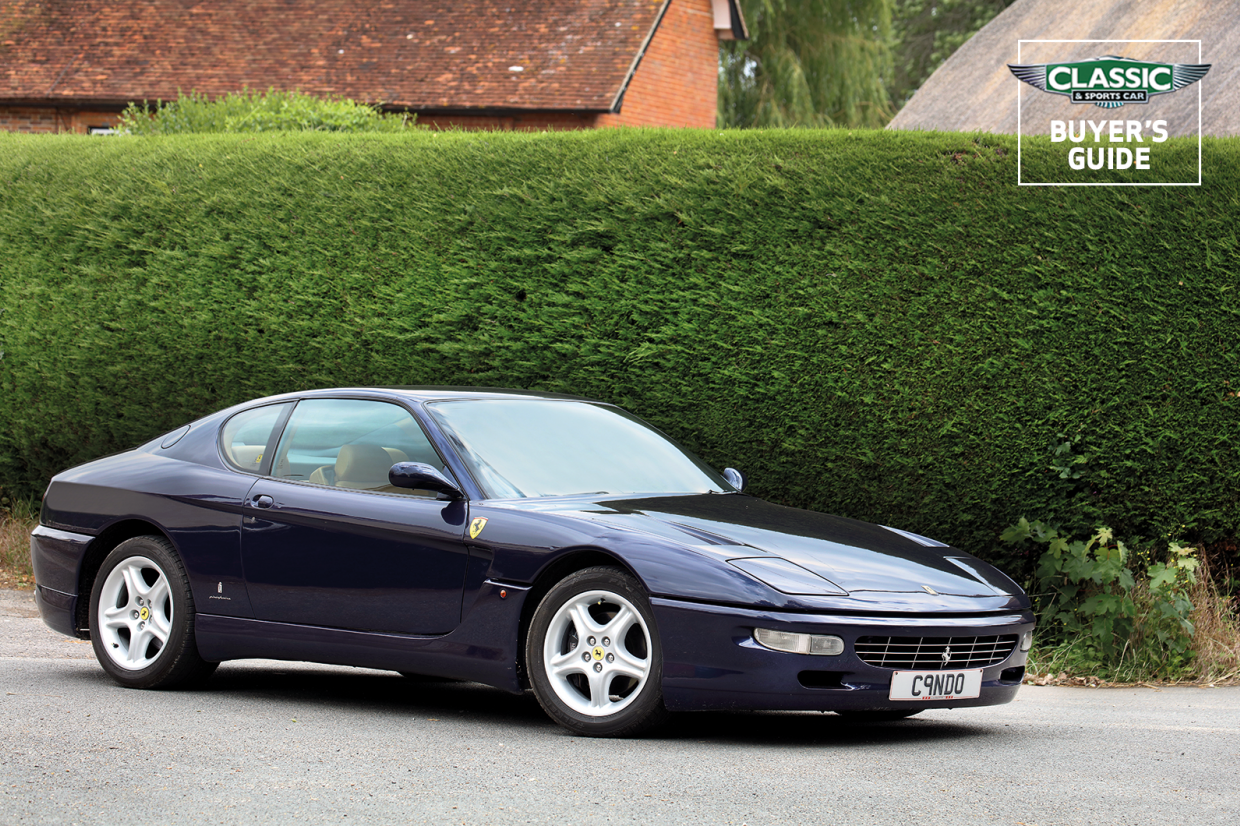 Why you’d want a Ferrari 456GT

With its all-new V12, traditional front-engine/rear-drive layout and a transaxle ’box to keep the car perfectly balanced, the 456GT helped re-establish Ferrari’s credentials as the maker of consummate grand touring cars for up to four people.

It was Ferrari’s most expensive car when new, but still £30,000 cheaper than an Aston Martin Vantage or a Bentley Continental R. And there was no traditional baulking from the new transmission – the chrome gearknob slices through the six forward speeds like a knife through butter to propel the near-two-ton 2+2 to 193mph and from 0-60mph in 5.1 secs.

The blissfully understated Pininfarina coachwork (styled by Pietro Camardella) was aerodynamic, too, giving it a 16mph top-speed advantage over the mega-muscular Vantage, though the Brit had the edge on acceleration.

Once the automatic option was added in 1996, 70% of customers chose it. A GM auto, it was adapted to transaxle installation by Ricardo.

A subtle facelift in 1998 heralded the ‘M’ (modificata), with improved interior, traction control and myriad detail tweaks to make it an even smoother drive.

Autos made up almost 50% of M production. Special 456s included seven five-door ‘Venice’ estates, with major modifications including Porsche 928 automatic gearboxes, at least three four-door saloons and one Spyder convertible; there have been several aftermarket cabrio and targa conversions, too.

Having dropped as low as £20k 10 years ago, some 456s suffered neglect: check the service history for gaps – though recent thorough maintenance is most important.

Coming from the new generation of usable Ferraris, some 456s have clocked up more than 100,000 miles and are none the worse for it if properly maintained.

There are no hugely expensive surprises in the regular maintenance schedule, either. A car that’s been used in recent years is likely to give less trouble than one that’s been sitting idle for months at a time.

Like the thoroughbred racehorse that is its logo, if you leave a Ferrari ‘out to grass’ or neglect its care for a period of time, you will have to lavish many, many hours getting it back into shape before it will win any races again.

The body and interior are more likely to be the money pits on a 456: save up for the best-condition car and you won’t regret it.

Ferrari 456GT: what to look for 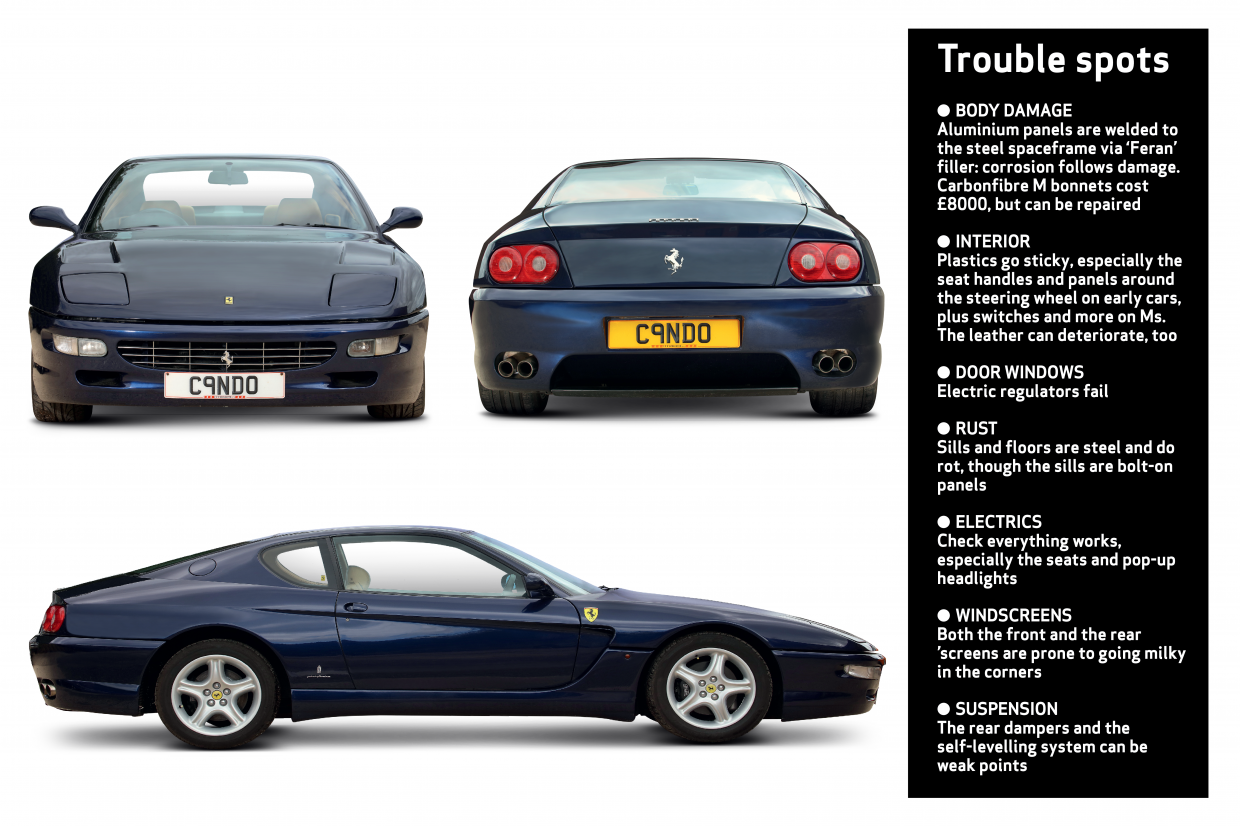 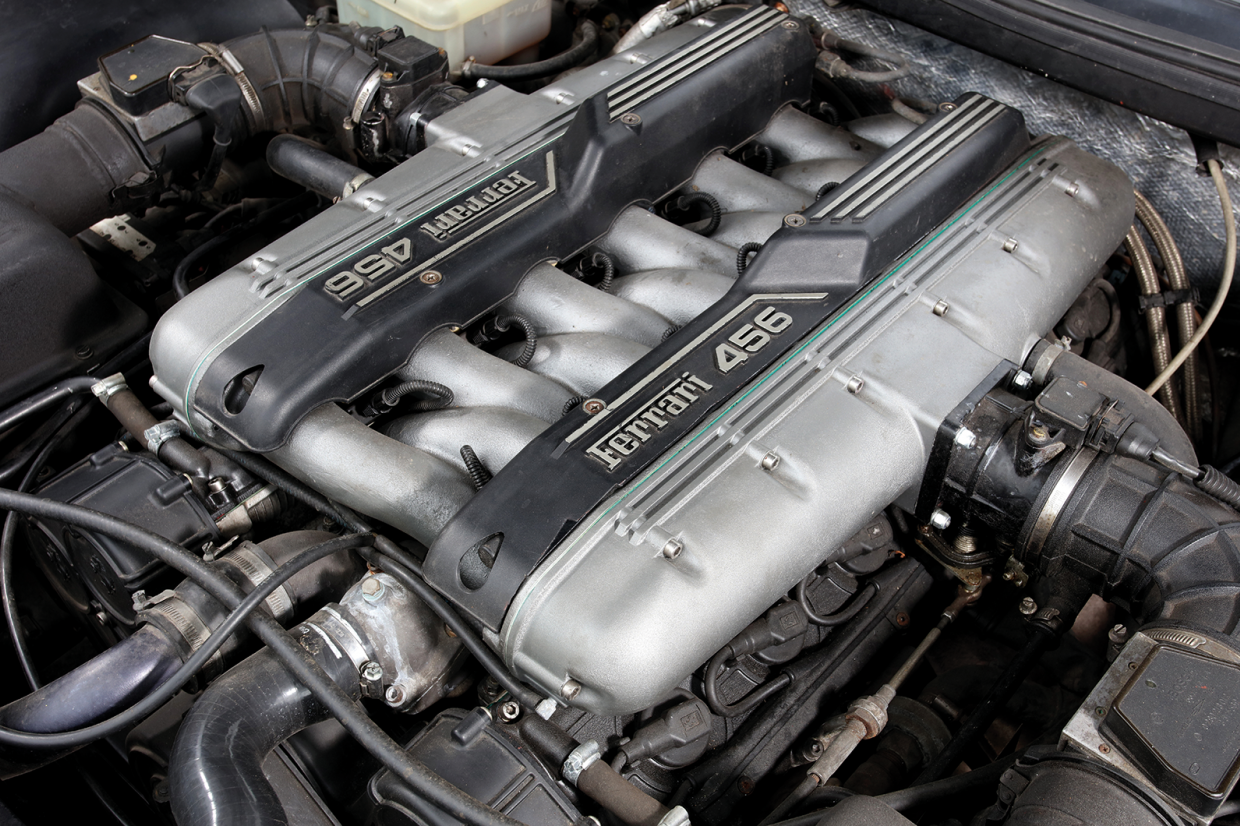 One of Ferrari’s most prolific units, the 5.5-litre V12 is fundamentally strong and reliable, capable of clocking up in excess of 100,000 miles without a rebuild.

Look for proof of regular maintenance and check for oil and coolant leaks – or signs of them mixing. The cambelt should be replaced every five years. 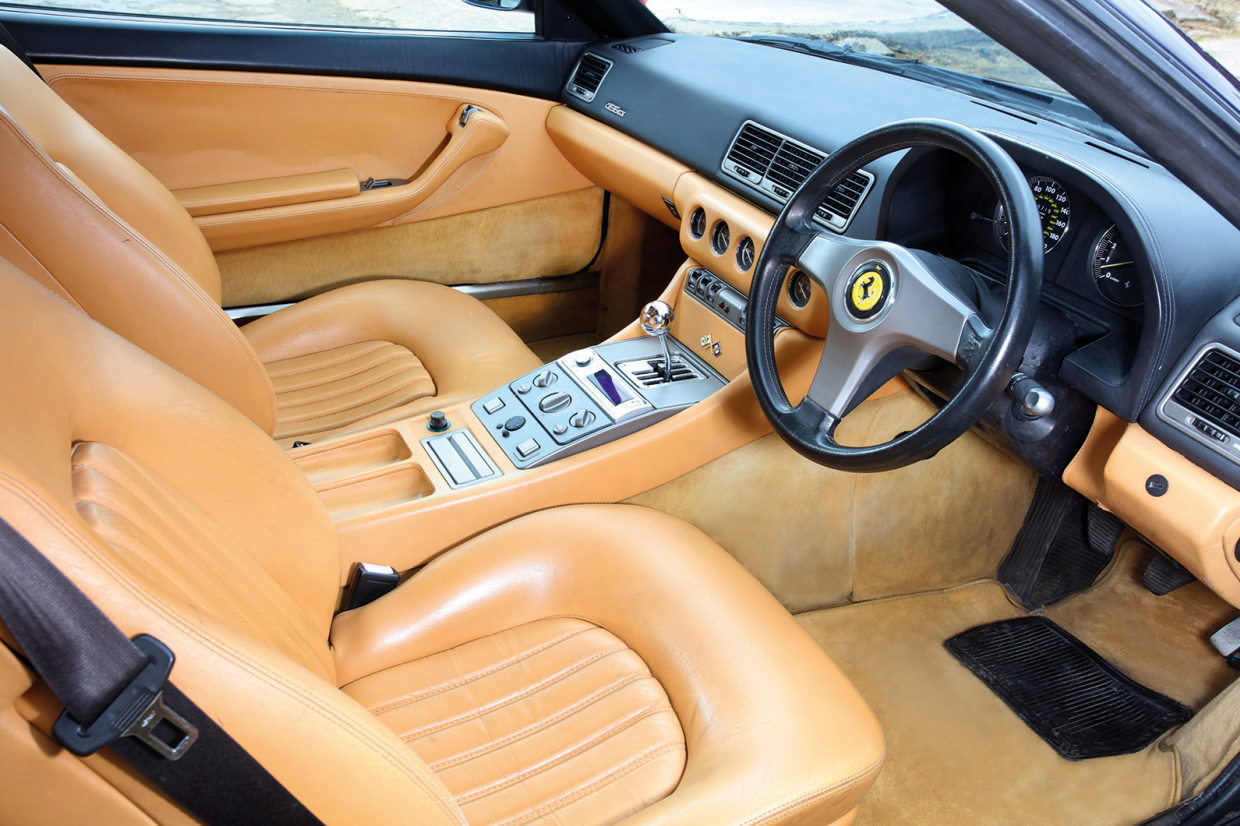 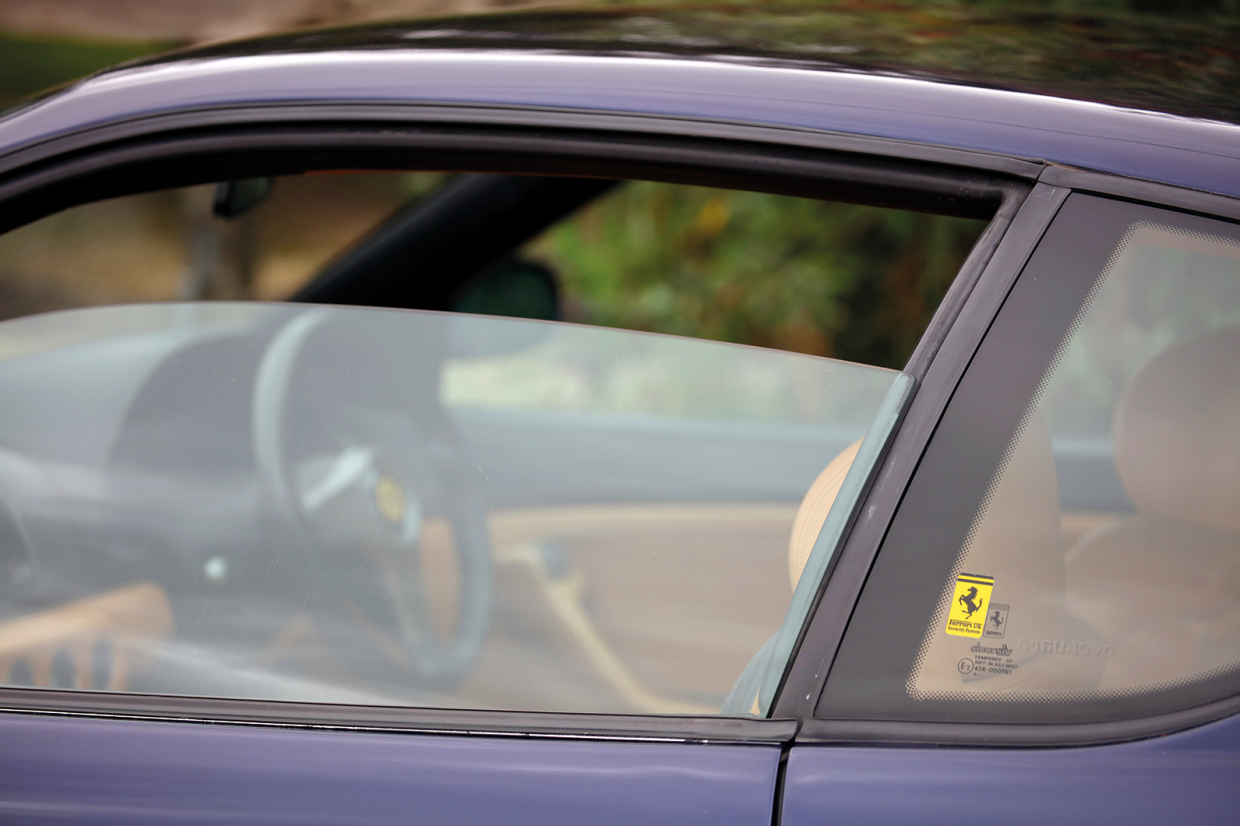 Check the leather trim for wear and sun damage, the electric seats for malfunction, and plastic trim parts for going sticky, especially on Ms.

Check that the door windows work smoothly, and drop/rise when door is opened/closed; regulators are weak and cost £1250, but cheaper fixes are possible. 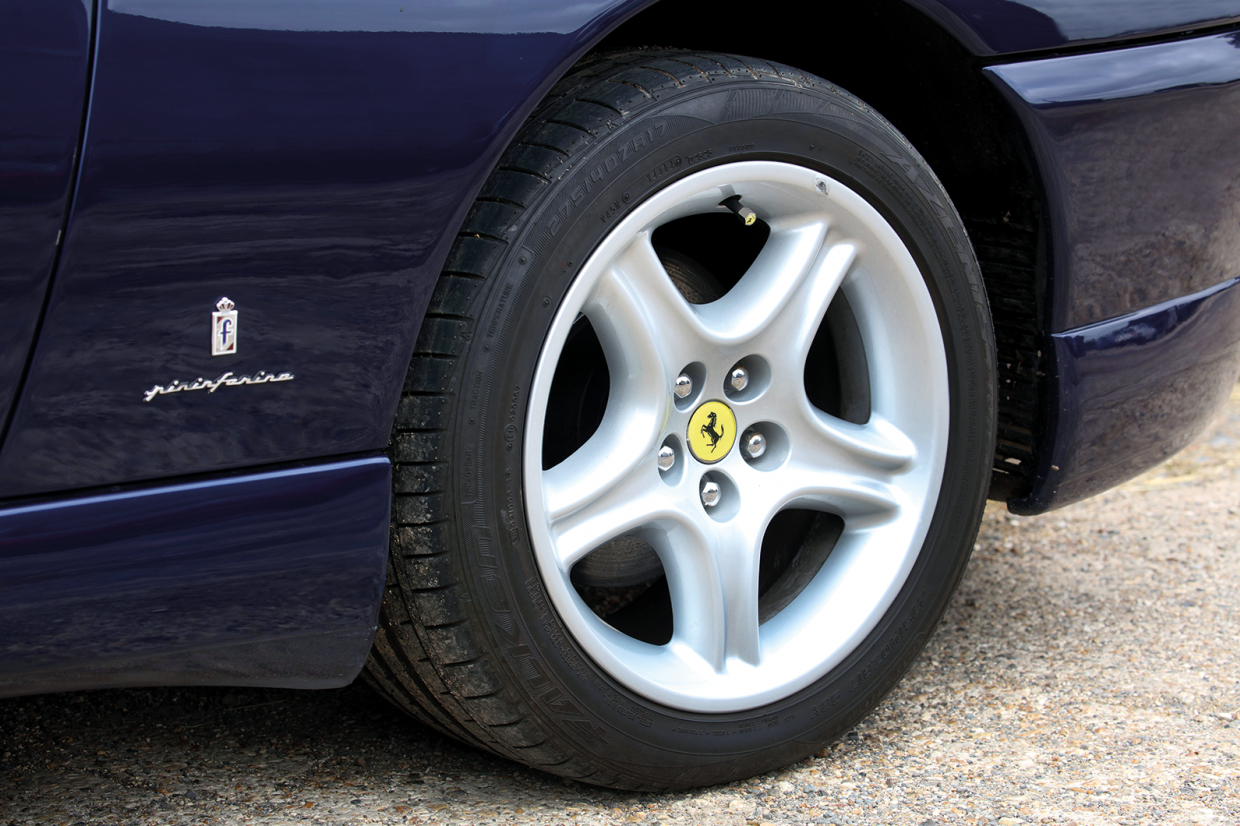 Check the condition of wheels and tyres. Test the self-levelling rear and that the suspension hardness settings work, and that the car’s rear dampers are not leaking.

Weak or failing pop-up headlights are common due to corrosion of a steel disc inside (and diode failure); stainless replacements are available. 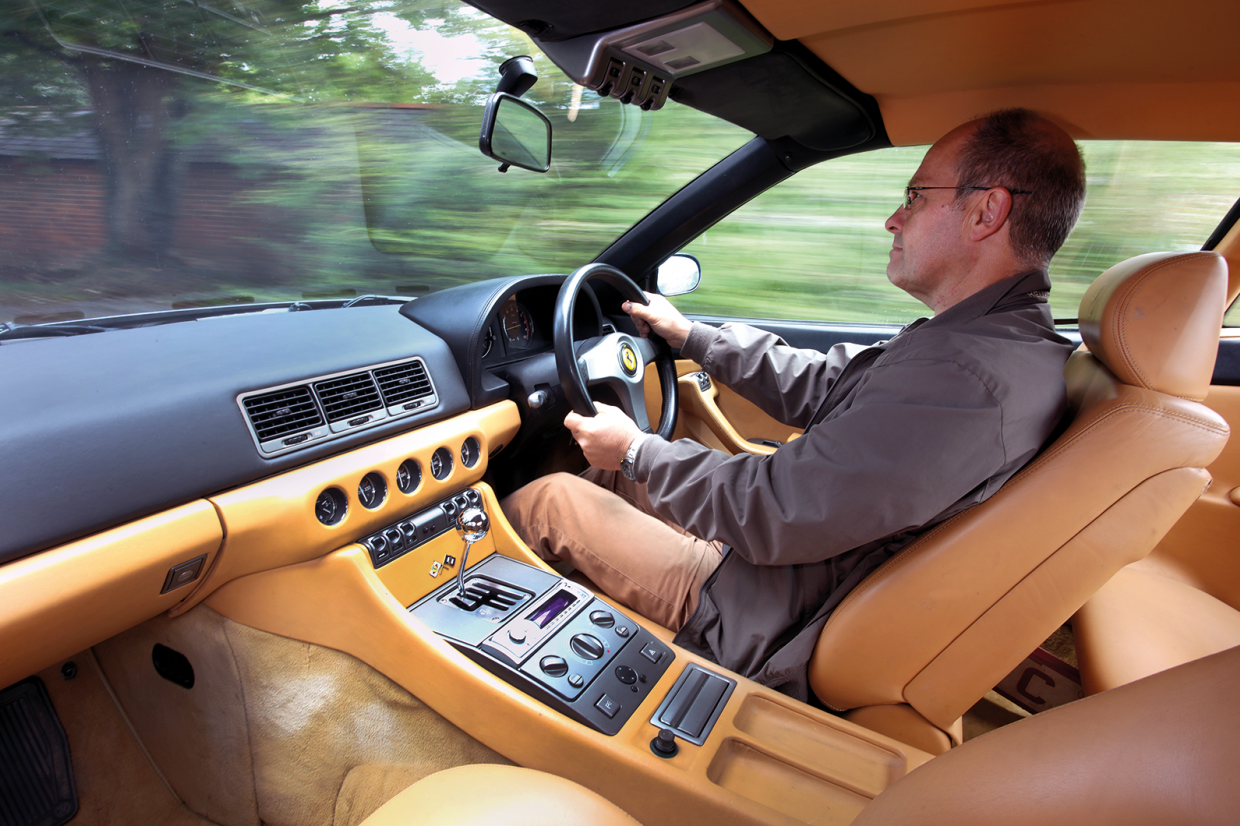 The Ferrari 456 is no lightweight, but it should perform with alacrity and feel supremely composed – the only creaking should be from the leather, not from the suspension.

There is no excuse for not maintaining one properly – the five-year cambelt change is easily achieved without removing the engine and it is even possible to do it yourself. The 32,000-mile valve check rarely reveals any need for adjustment, either.

The six-speed manual gearbox should have none of the traditional Ferrari baulking from cold – it has few vices except an occasional circlip failure causing it to jump out of reverse, so check for that; a strip-down is required to replace it. Four-speed autos are similarly robust, and can be rebuilt by American-car specialists if required.

The rear dampers can be rebuilt and it is not always necessary to buy Ferrari-manufactured parts, because some items are common to lesser vehicles and therefore available at much cheaper prices.

The rear self-levelling suspension can be a weak point and is prone to leaks – it shares a reservoir with the power steering, which can suffer if it runs dry.

While investigating under the rear of the car, check the transmission oil cooler behind the axle (in the bumper on autos) for corrosion.

The brakes should feel effective and secure – they don’t last for ever on such a weighty car, so replacement will be needed from time to time.

1992 Announced at the Geneva Salon 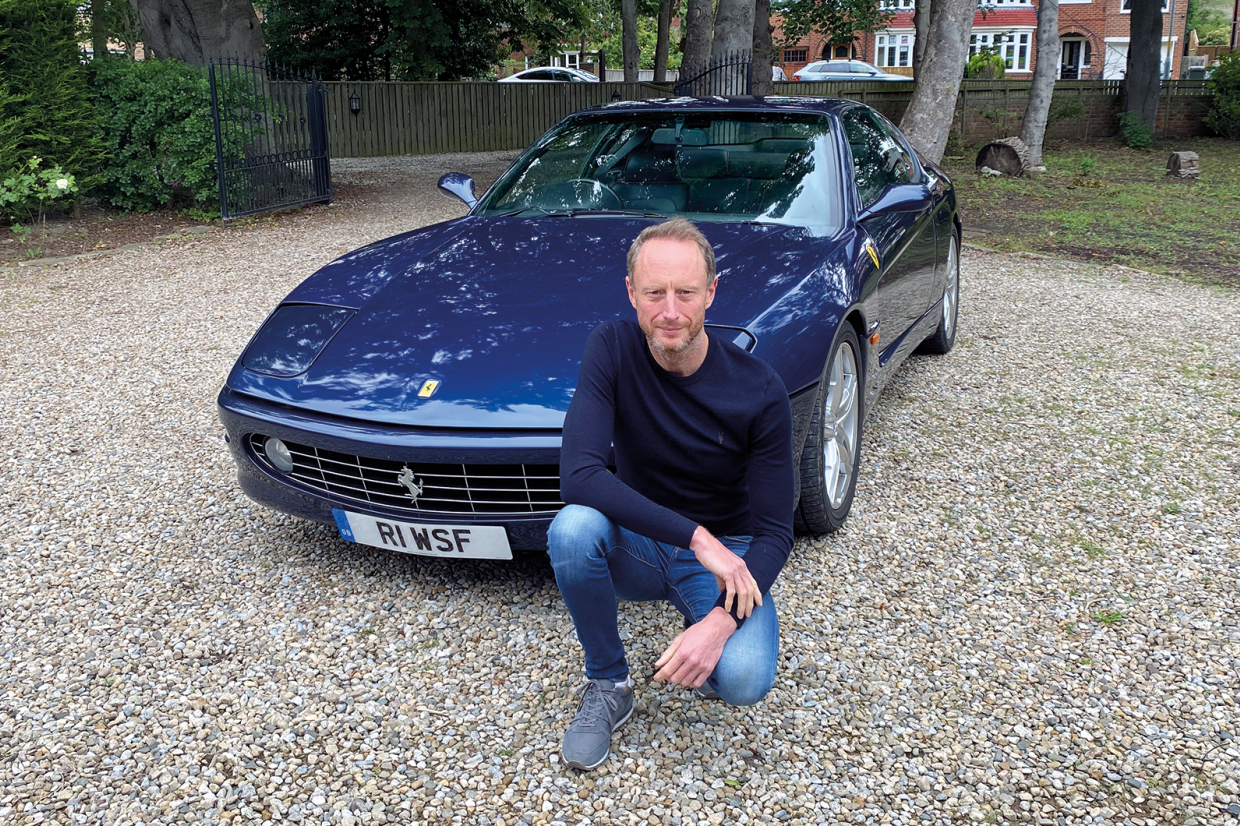 “Twelve years ago I was looking for something more exotic than my M5,” explains Richard Williamson.

“I bought an F355 and liked it, so five years ago I sold my Aston DB7 and bought a 456M GT, a rare right-hand-drive manual, to use every day in the summer.

“It rains a lot in the north, so I don’t use it as much as I’d hoped, but I drive it more than my F355 or 575M. We’ve done some European trips with my three-year-old son in the back and it’s reasonably practical – my wife tolerates it, though when her seat stuck in the upright position she wasn’t impressed!

“It’s one Ferrari where you don’t need to worry too much about mileage – the body and interior are the fragile, expensive parts. I had to replace both rear quarter windows and one cost £1250 – the M windows are slightly larger than on earlier cars.” 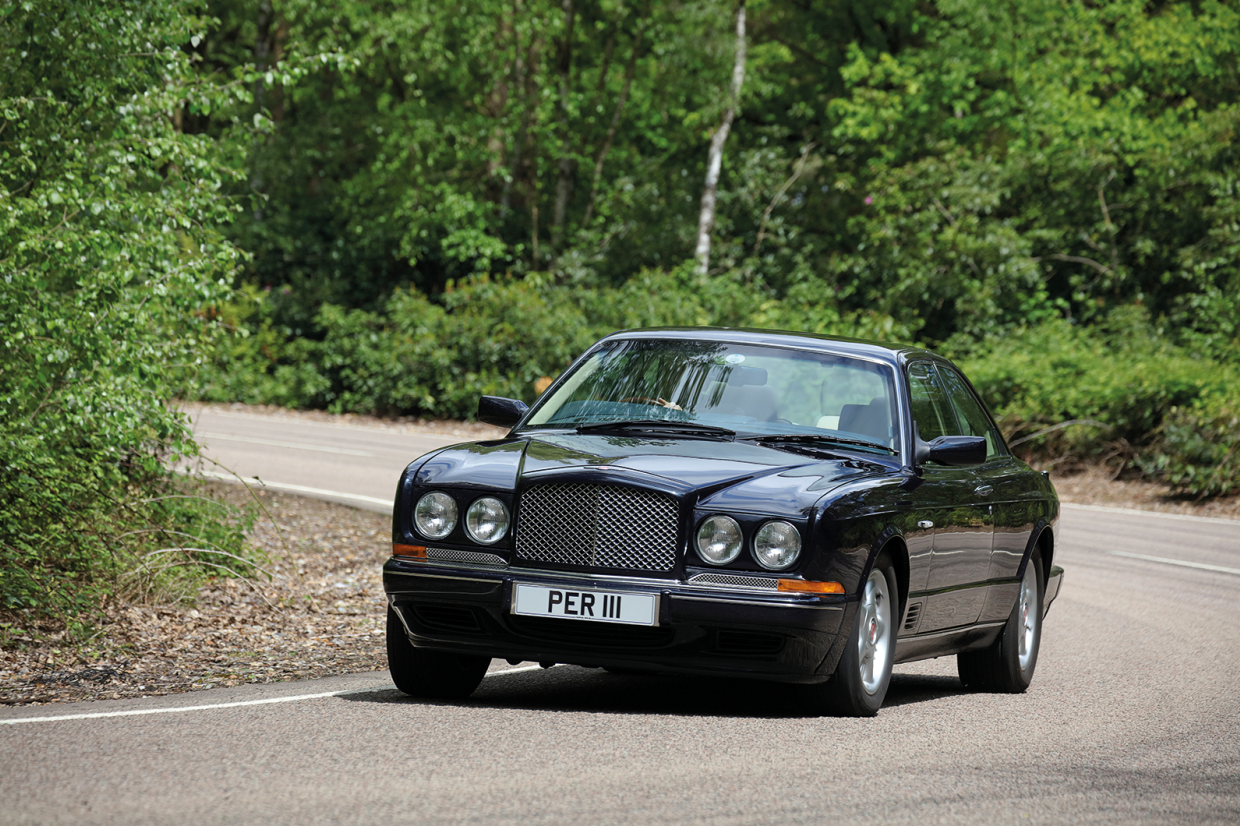 Aston’s handbuilt flagship cost up to 40% more new, but is three times the price now. Brutally quick, but beware rust and leaks.

The most expensive production car of the late ’90s is a bargain today. Check for corrosion and signs of mechanical neglect. 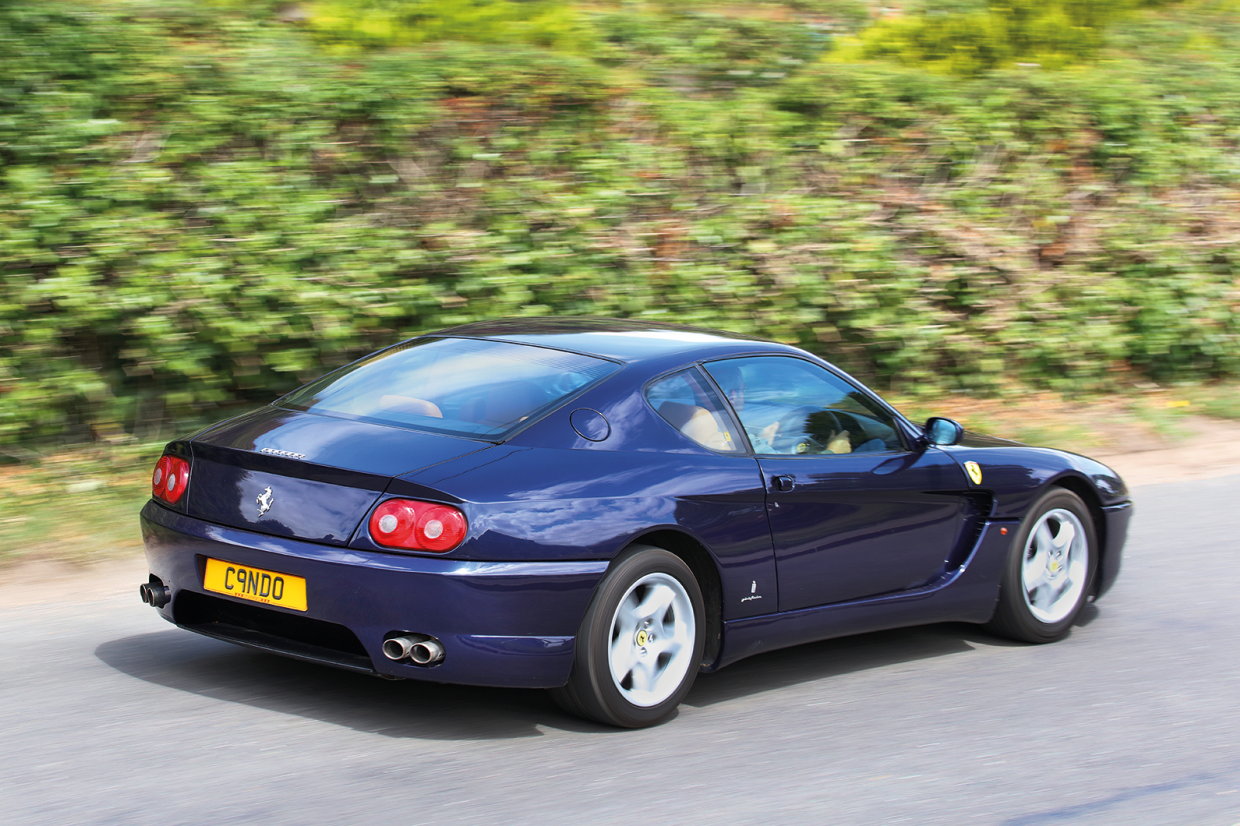 The 456 has to be one of the best Ferraris to own if you are not on a limitless budget. It has few costly vices, no hugely expensive maintenance requirements and predates the era of immensely complex electronics.

And values are reasonable for the marque. A good specialist will be able to maintain one long-term in regular use for £1000 a year, and you can even do it yourself.

But the first job is to buy the very best example that you can find with a well-documented history. 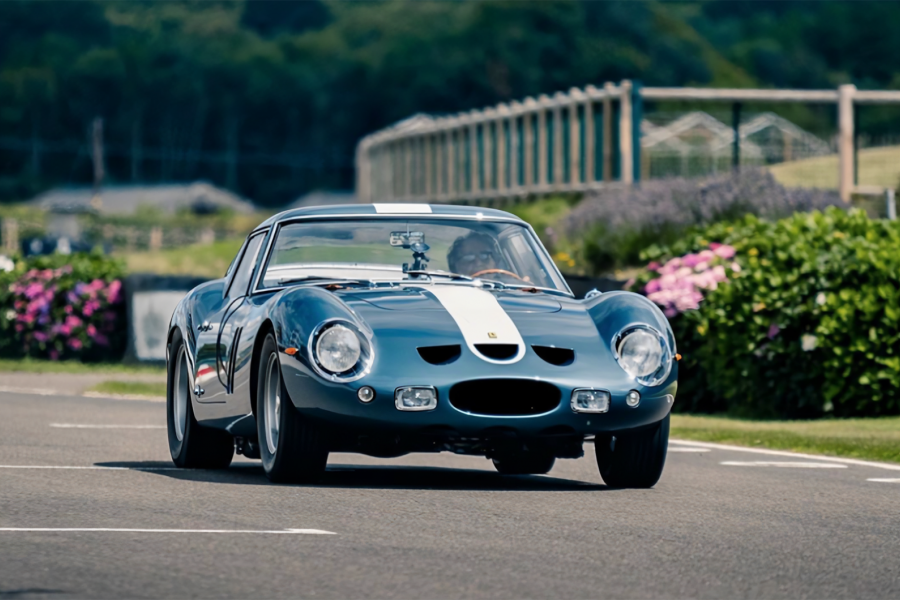 Forza Ferrari at this year’s Concours of Elegance 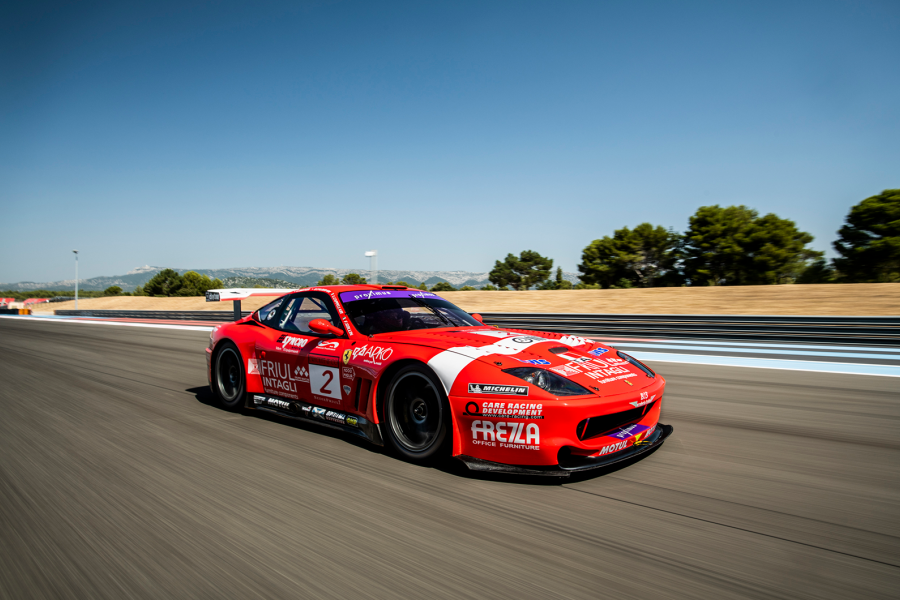 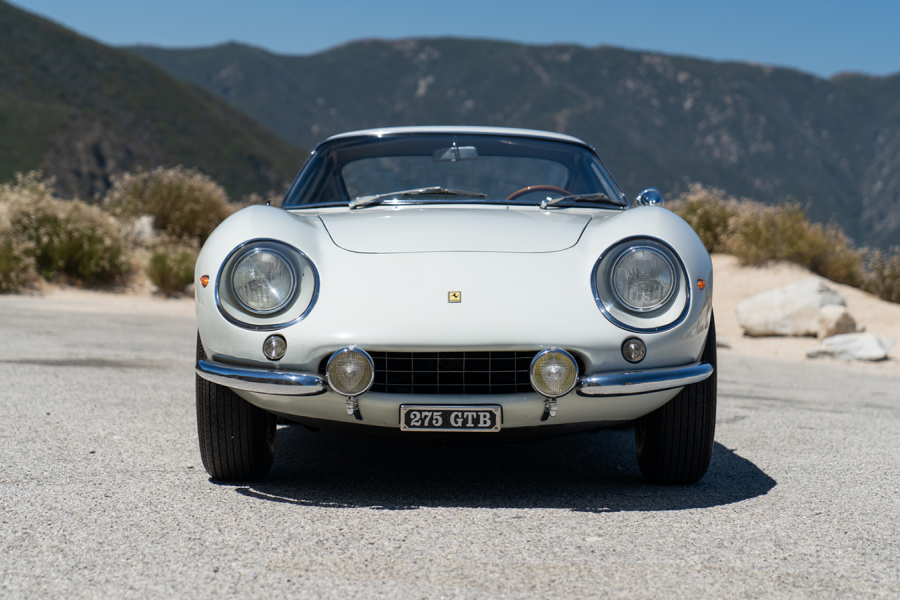