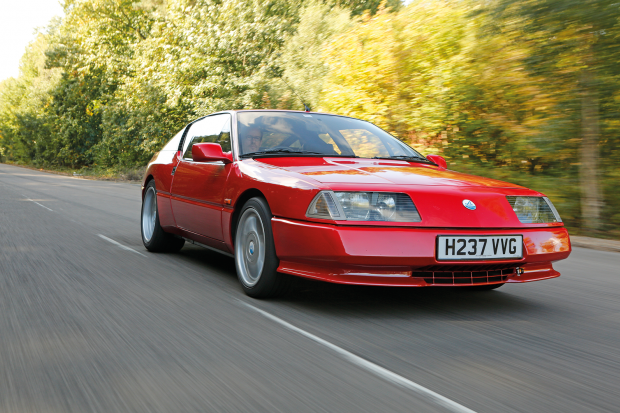 In the world of classic cars, buyers can get too focused on a particular variant simply because fashion or hype dictates that’s ‘the one to have’ without always questioning the logic of this received wisdom.

With this in mind, it’s amusing, and instructive, to look at cars that do much the same job as their over-hyped brethren but are, for whatever reason, off the radar for most buyers.

The good news is you can profit from the ignorance of the herd and snap up an off-trend model for a lot less money. See below for our choices. 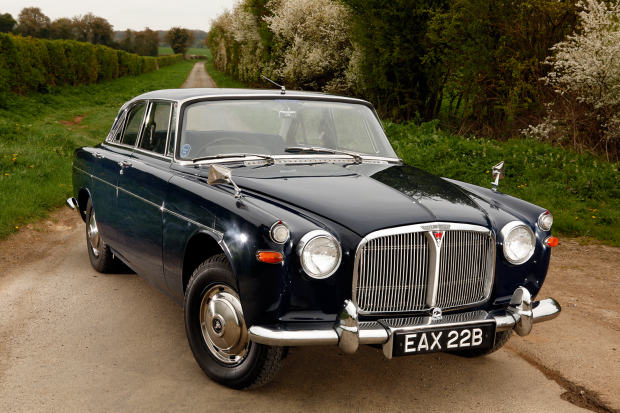 Much loved in 3½ litre form for its combination of English style and fittings with V8 power, the six-cylinder precursor to the P5B Coupé is often overlooked.

As a result, they’re available at around half the £15-20k you’d pay for a good V8 – though you might have to be patient, as they are somewhat less numerous.

The handsome shape is the the same, of course, except you get wheel covers rather than the styled sports wheels that always sat ever-so-slightly uneasily on the 1967-’73 P5B coupé.

Some argue that the general detailing and finish is more pleasing on the 3 Litre, with its near-silent ‘F’-head straight-six engine and there is a chance you will capture a manual version – never a possibility with the later car. This claws back some of the performance advantage, but don’t worry about that: with such light, vague power steering, none of these Rovers are about going quickly anyway. They all rust, too.

If you’re willing to compromise on looks – or even prefer the more upright, formal 10 Downing Street shape – the real P5 bargains lie in the realm of the saloons. 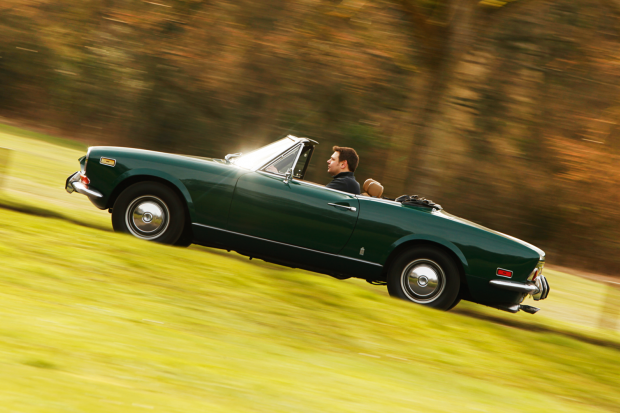 With price of a ’70s Alfa Spider on the rise, its period rival the Fiat 124 seems to be getting left behind slightly.

All things being equal the Alfa is probably the marginally more appealing car to drive, but arguably not to look at: ugly park bench impact bumpers fitted to the American market Fiats (which most of them were) not withstanding, the 124 is the more conventionally pretty car, with a chassis that is at least as good as that of the Alfa Romeo.

The Fiat’s twin-cam can be made to sing like the Alfa with all the detox gubbins removed, but what you’ll never find is a factory right hooker, as they never built them that way.

If you are focused on Alfa ownership then consider an ’80s Spider instead – which, beneath some of the dubious period ‘enhancements’ such as body kits and ugly alloys, are still great cars to drive. 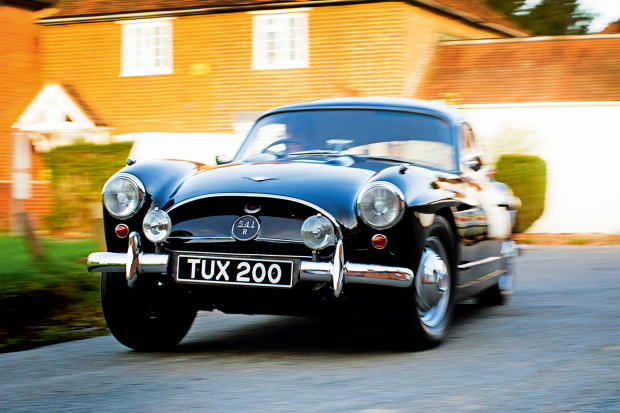 It takes rather a leap of the imagination to think of a plastic Jensen as a serious alternative to a DB4, but Aston Martins of this generation are so out of reach now that there is more of a case than ever for the 541.

At £25-60k depending on model and condition, they are vastly cheaper to buy and run than a DB4 – and quite a lot rarer.

What you get is a four-seater coupé with realistically sized seats and a good standard of finish. The engineering, with rugged, beefy BMC mechanics, is somewhat truck-like in places, but effective: high overall gearing makes the best of a limited rev range.

The 541 pioneered disc brakes and seat belts on British cars and ran from 1954-’63, latterly with a wider, longer body and a Rolls-Royce Hydramatic auto ’box.

The bodies are pretty and individualistic, if not exactly beautiful, and while 541s don’t rust, glassfibre bodywork can be expensive to get repainted. 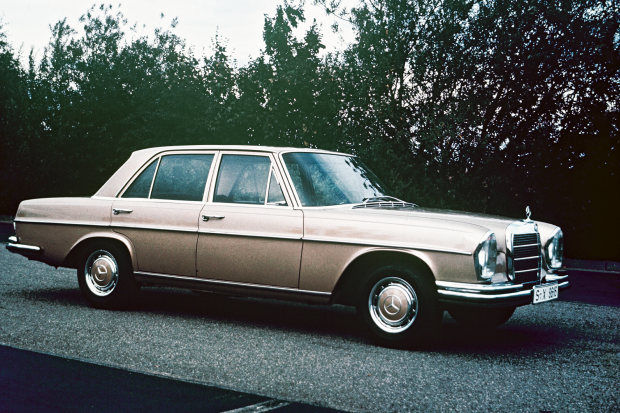 The trick with Mercedes is not getting too focused on what the badge on the boot says; the one with the biggest engine is not necessarily the best version.

In the realm of the ’60s and early ’70s big saloons, all eyes are focused on the 300SEL 6.3, the so-called ‘banker’s hot-rod’, much fancied at the time by pop stars and racing drivers.

Make no mistake, it is an exciting car with a very particular character – but you’ll find better balanced handling, near-identical looks and a lot less complication and expense lower down the Mercedes food chain, in the form of the 280SE 3.5 saloons.

You still get an injected V8, but a smaller, sweeter one that will rev its heart out and consume much less fuel. It’s also likely be rather less troublesome than the somewhat specialist M100 engine in the 6.3, now a £60,000 car at the top end.

With less weight on the front wheels, the £25,000 3.5s handle better and with steel springs rather than the 6.3’s air system, you save yourself a lot of potential financial pain. 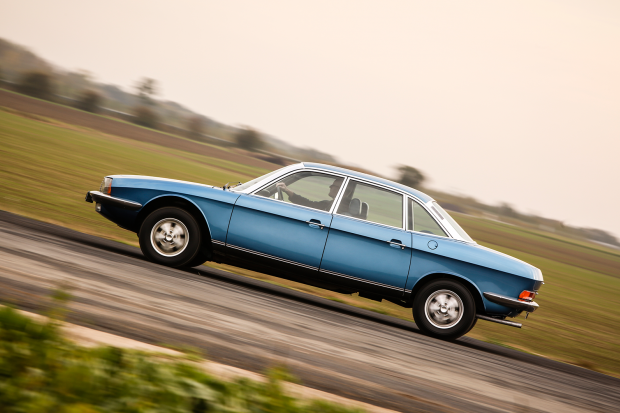 Feel that the Citroën DS has become something of an over-hyped, over-priced cliché? Then take a look at an NSU Ro80 instead.

The definitive Wankel-engined saloon, it’s faster, quieter and more aerodynamic than any of the DS variants thanks to its smooth, compact rotary power unit and a slippery shape that was the template for the modern wedge-profiled saloon car.

Engine problems are no myth, but are perhaps overstated; a good one can be very reliable if looked after and driven reasonably sympathetically.

They are not in huge abundance, but the number of good examples probably outweighs the number of potential purchasers; with prices generally less than half that of a comparable DS23, you might be tempted to buy both! 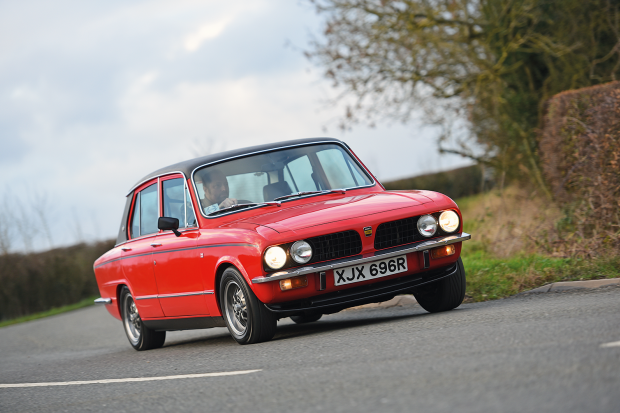 I have an American pal who owns both a Triumph Dolomite Sprint and a BMW 2002. He is emphatic when he says he prefers his Triumph, with its clever 16-valve, 127bhp engine. I couldn’t say, having never driven a Dolomite Sprint, but I’m willing to believe it is at least comparable with a 2002 Tii.

Now talked about in hushed referential tones, £20,000 is routinely asked for these once-common small BMWs and £40k is not unheard of. I like 2002s, but not that much.

The Sprint, at say £10k for a nice one, is as quick and has a comparable competition pedigree; they even used one in the first series of The Professionals.

On the debit side, a Sprint won’t enthuse those who like austerely functional Teutonic finish and build quality, yet the lurid colour schemes, stripes and alloys were quite effective in disguising its origins as a granny’s shopping car.

The nearest I got to driving a Sprint was hitching a ride in a ratty old BMW 3-Series circa 1990: the owner told me he had binned the original engine and fitted a Dolomite Sprint lump: ‘Much better’, he reckoned. 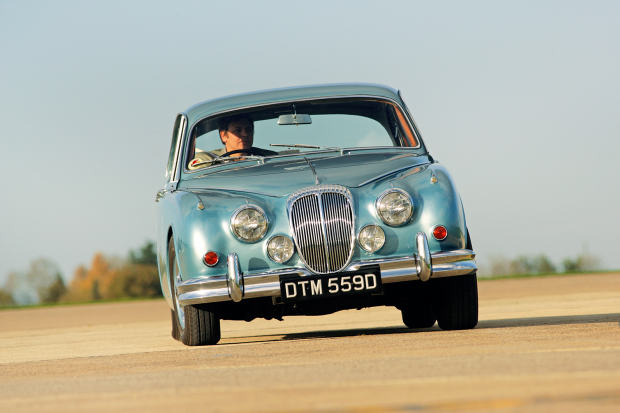 These V8-powered Daimler saloons are really badge-engineered Jaguar Mk IIs and were an inspired way of getting Daimler customers on board after the Jaguar takeover in 1960, with a car that was perceived as being more genteel and less ‘spivvy’, with a ‘proper’ Daimler engine.

They were a great sales success, with better performance than the 2.4 Jaguar and nicer handling and fuel economy (from a lighter, more efficient V8) than the bigger-engined MkIIs.

Because they tended to have older, more careful owners, and were largely a UK-market RHD model, there is a good supply of survivors out there, starting at £5000 for a running project up to £25,000 for one of the best; you’ll need another 10 grand if you want a 3.8 Mk II in comparable order.

Most of the Daimlers are automatics. This suits the character of the car, which in early deep-bumper form was known as the 2½ litre V8; the manual ’box is rare and only fitted to the later 250 V8s from 1967-’69.

If you really want the ’60s Jaguar saloon experience, the S-type and 420 saloons (particularly the latter) are still reasonable value. 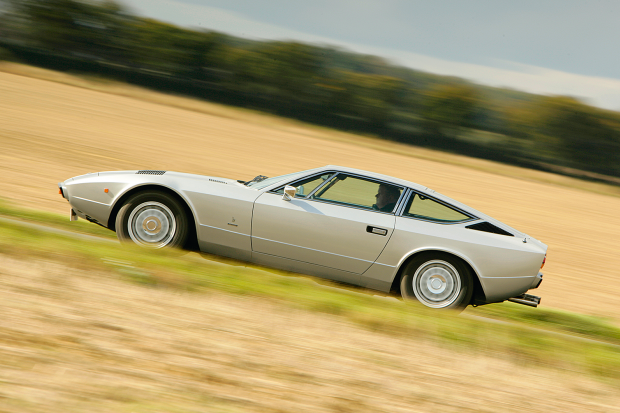 Sometime this century, if not this decade, I walked away from an automatic Maserati Khamsin in perfectly good running order and with right-hand drive, for £7000. That would be a £100,000-plus car today.

But even at, say, £170,000 for one of the best, these dart-shaped two seaters, perhaps the last real Maseratis of the classic period, look fairly well priced compared with a £250,000 Ghibli, the firm’s previous flagship two seater ‘super car’.

The fact that the Khamsin, with its Citroën-style brakes and steering, is a rarer and more technically advanced car than the cart-sprung Ghibli means precisely nothing; the older car simply has more caché with those deep-pocketed people who drive the market.

But I cannot help feeling that the Khamsin, styled by Gandini and powered by the classic Maserati 4-cam V8, is yet to have its day. 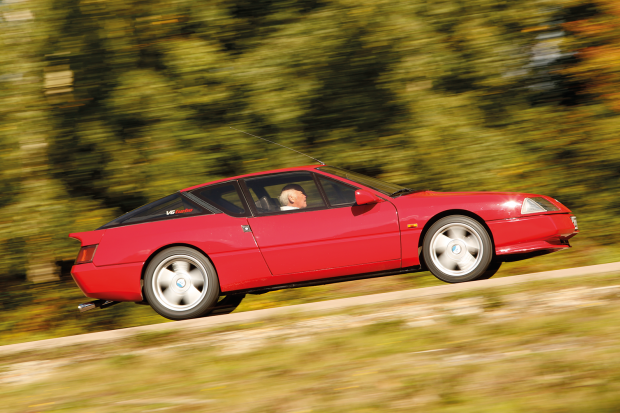 Because Porsche 911s are so massively bigged-up you might, like me, want to kick back against all the hype while secretly acknowledging that they are great cars. The best way to do that is with a Renault Alpine.

In some ways it is everything the Porsche isn’t: French, made out of plastic (not particularly well) and powered by a somewhat pedestrian V6 engine more usually found in a Volvo or a variety of other Euro executive saloons.

Yet, somehow, it all worked; with its typically Alpine backbone chassis the GTAs were quick, light and very agile, garnering high praise for their driver appeal. They got good mpg as well, and many were used as everyday cars.

If they never gained the cache of a 911, neither did they command the same price. In fact, as new cars Alpine GTAs were really more comparable price-wise with the Porsche 944.

Alpine had a long association with Renault and these were the first built post-takeover. With its rally-winning history the Alpine had huge credibility with enthusiasts, but in the UK it was sold simply as a Renault GTA in either naturally aspirated or Turbo form: many prefer the non-turbo cars. 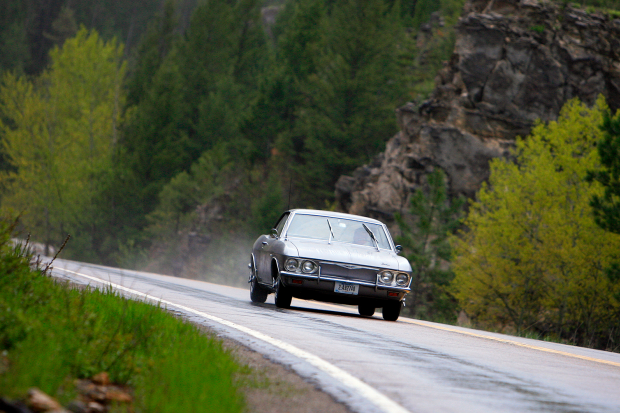 Volkswagen Karmann Ghias are such pretty cars that their utter lack of performance feels slightly annoying.

While they are not quite the clichéd classic they were in the ’90s, I still can’t help thinking that anyone who values style over driver appeal this much really needs help. When you have to spend £5000 for a project and anything up to £30,000 (or more, depending on model and rarity) you really do need to have a word with yourself.

My answer is the Chevrolet Corvair. Not the death trap Ralph Nader claimed, Corvairs are VW-like in that they have a rear-mounted air-cooled engine. The crucial difference is that it’s a ‘six’ not a ‘four’ – hence it sounds more like a 911 than a Beetle. And with 80-150bhp on tap, any of them will go better than a Karmann Ghia at any rate.

Corvairs are not in huge abundance in the UK or Europe, but there are still loads in America, ranging from a couple of thousand dollars up to maybe $20,000 for a rarity such as a Turbo convertible.

The 1969-’65 versions have cute Hillman Imp-like looks on a larger scale, while ’65-on versions are particularly pretty in two-door coupe form. And to seal the deal, Corvair parts are cheap and freely available from the States.

19 undervalued classics from the 1980s