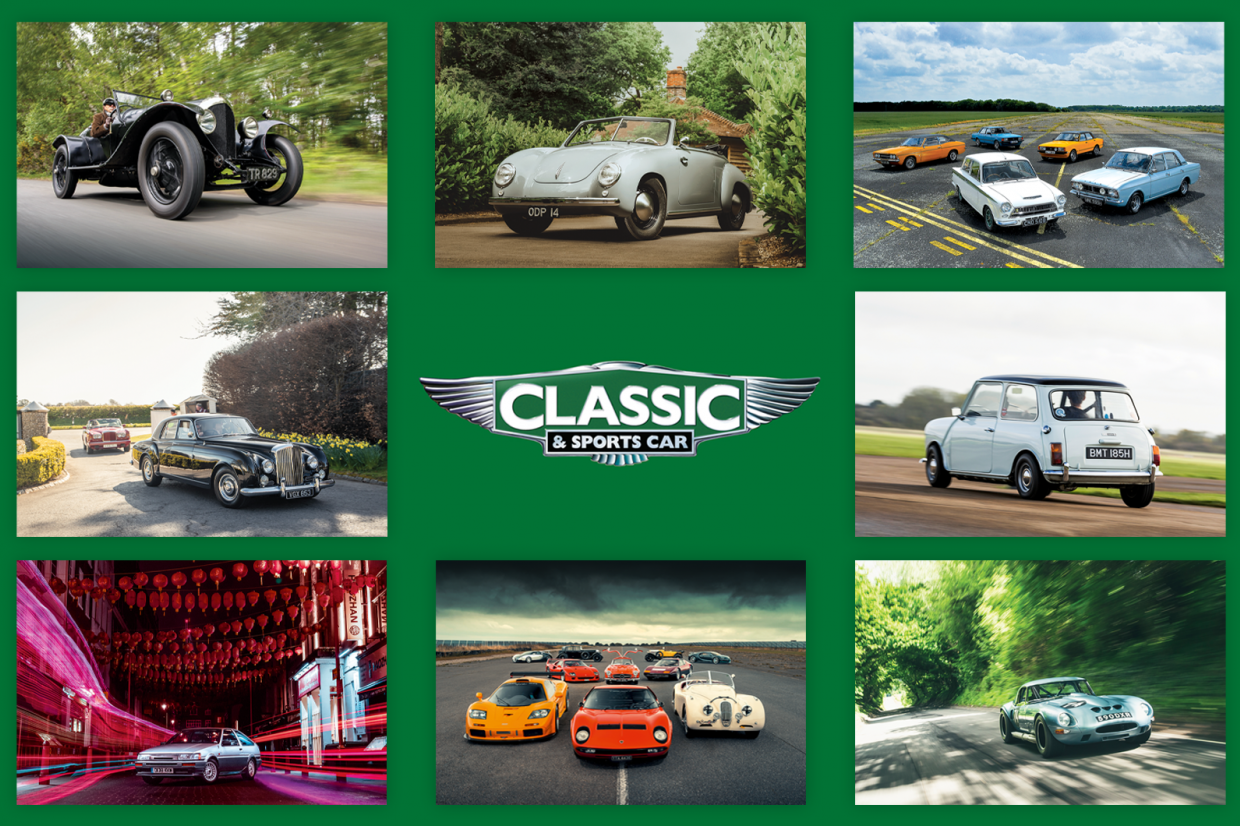 Never miss an issue of Classic & Sports Car and save money when you subscribe! Check out our latest offers

The C&SC team singles out the highs from a memorable year of classic motoring, and photographers pick their top pics. 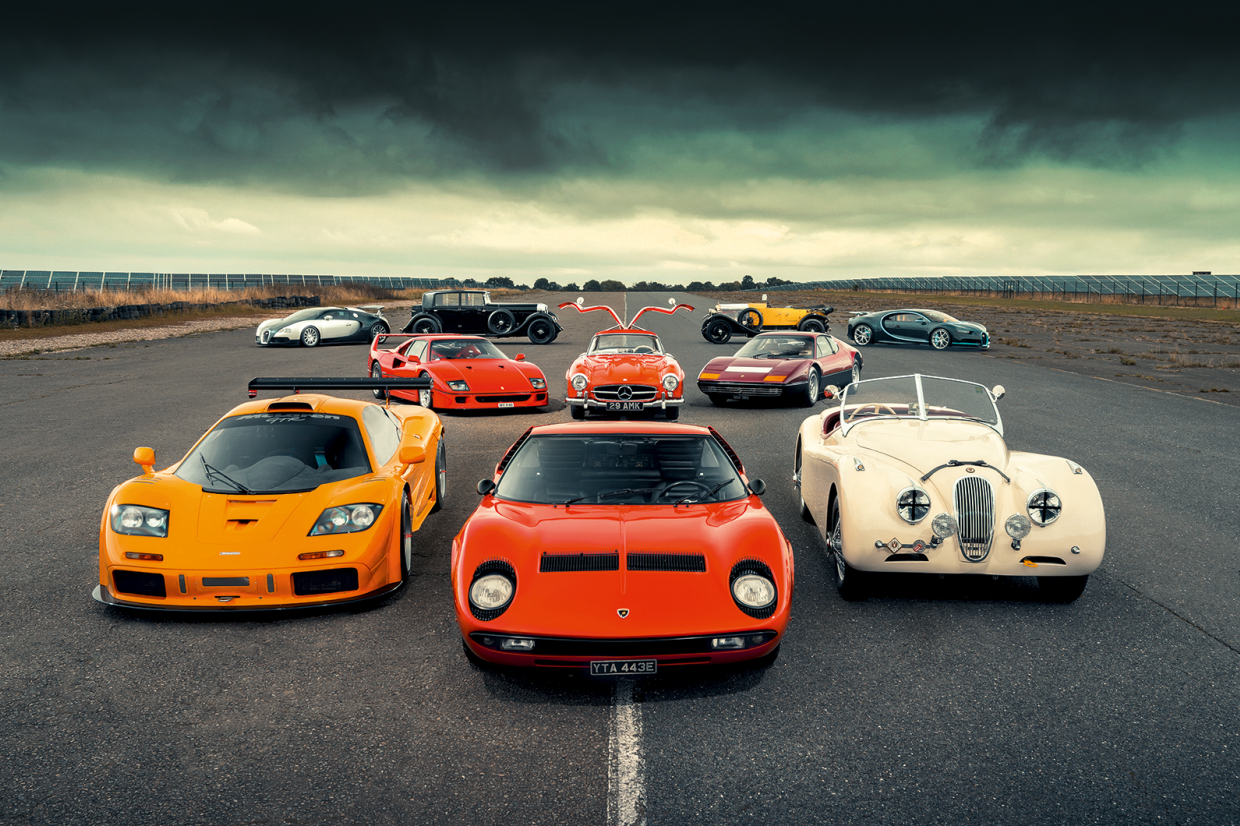 Rétromobile in Paris is always wonderful and 2022 was no exception, not least for Simon Kidston’s breathtaking display of McLaren F1s. But my heart was stolen by another rare supercar, Koen Heuts’ remarkable 1971 AMC AMX/3 (below right). Driving this 340bhp Bizzarrini wonder, the last of six cars built, would be a dream.

My favourite only just sneaks into our timescale, and was a truly life-affirming experience. A thrilling cross-country blast in the Mk3 Mini Cooper ‘S’ (below left) after a wrong turn on the way back from our January ‘World Cup’ cover shoot reaffirmed why Alec Issigonis’ baby is so rightly revered. Brilliant.

I’m going to cheat here, because it was an event only a few invited guests were able to attend, but the results were spectacular. When Simon Hucknall came to me suggesting we gather together the fastest cars from each decade, I never thought he’d achieve it, but the cover of our 40th-anniversary edition in April (above) proved me wrong, and how.

To reignite the C&SC tradition of the ‘Poor Boys’ [and Girls’] Tour’ – it’s been far too long. 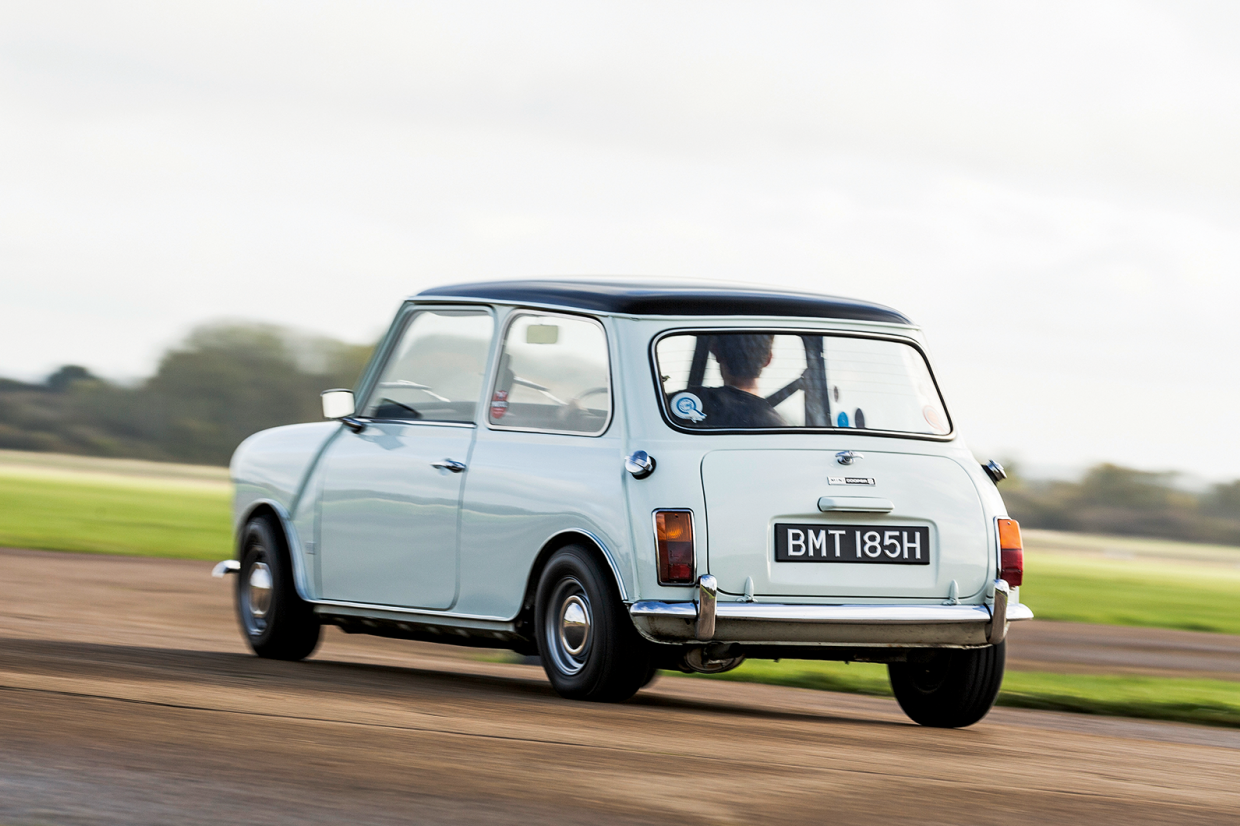 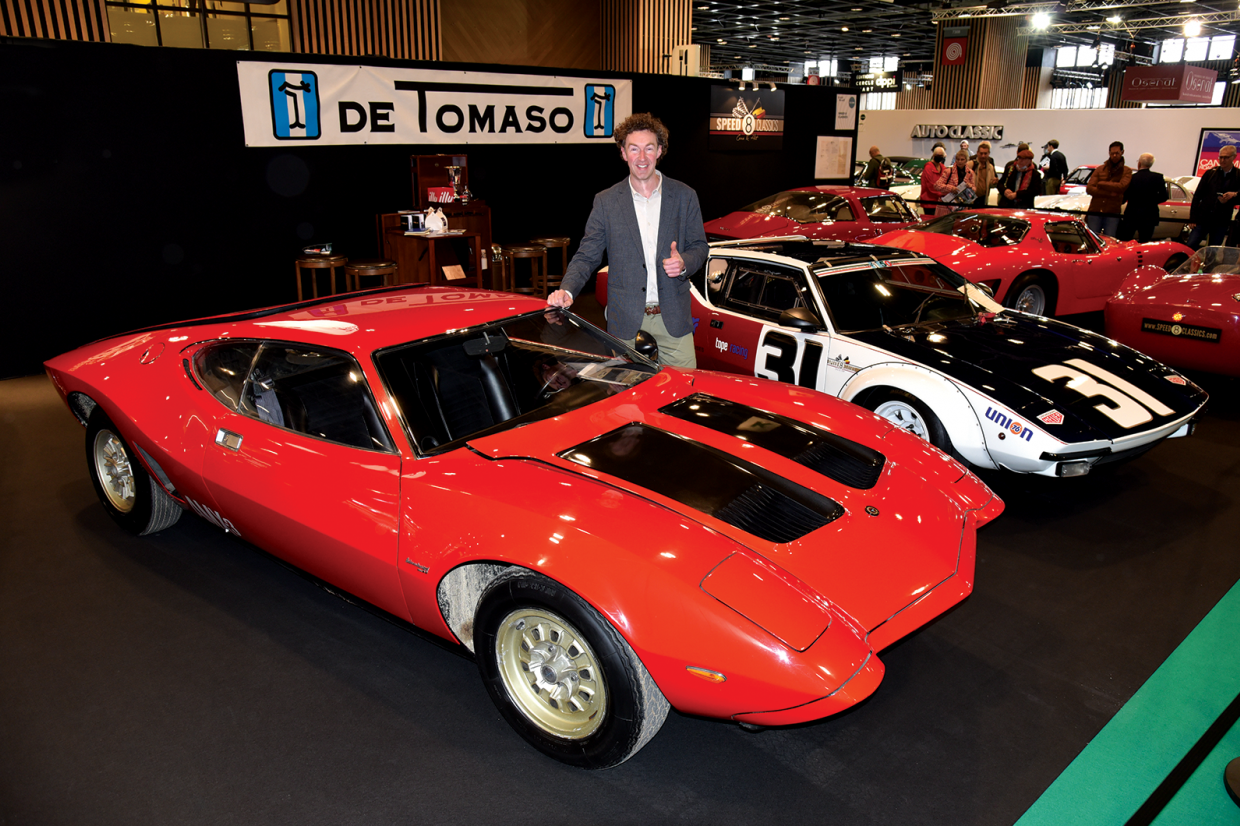 It’s fascinating to unearth the tales behind other people’s cars. Meeting Kirsty Allan (below left) at the McLaren Technology Centre (January) was a great opportunity to pore over her gorgeous Opel GT and a privilege to hear her story.

I’ll not forget the whisper-quiet 1958 Bentley S1 Continental I was fortunate to drive to Goodwood’s Members’ Meeting (below right). Not only was it a serious case of arriving in style, but the progress of the silky ‘six’ along sunny Sussex lanes, and the incredible comfort and refinement, were very special.

For the umpteenth time… I need to get back out on the maps on a historic road rally. Yes, I’ve said this every year for a few now. 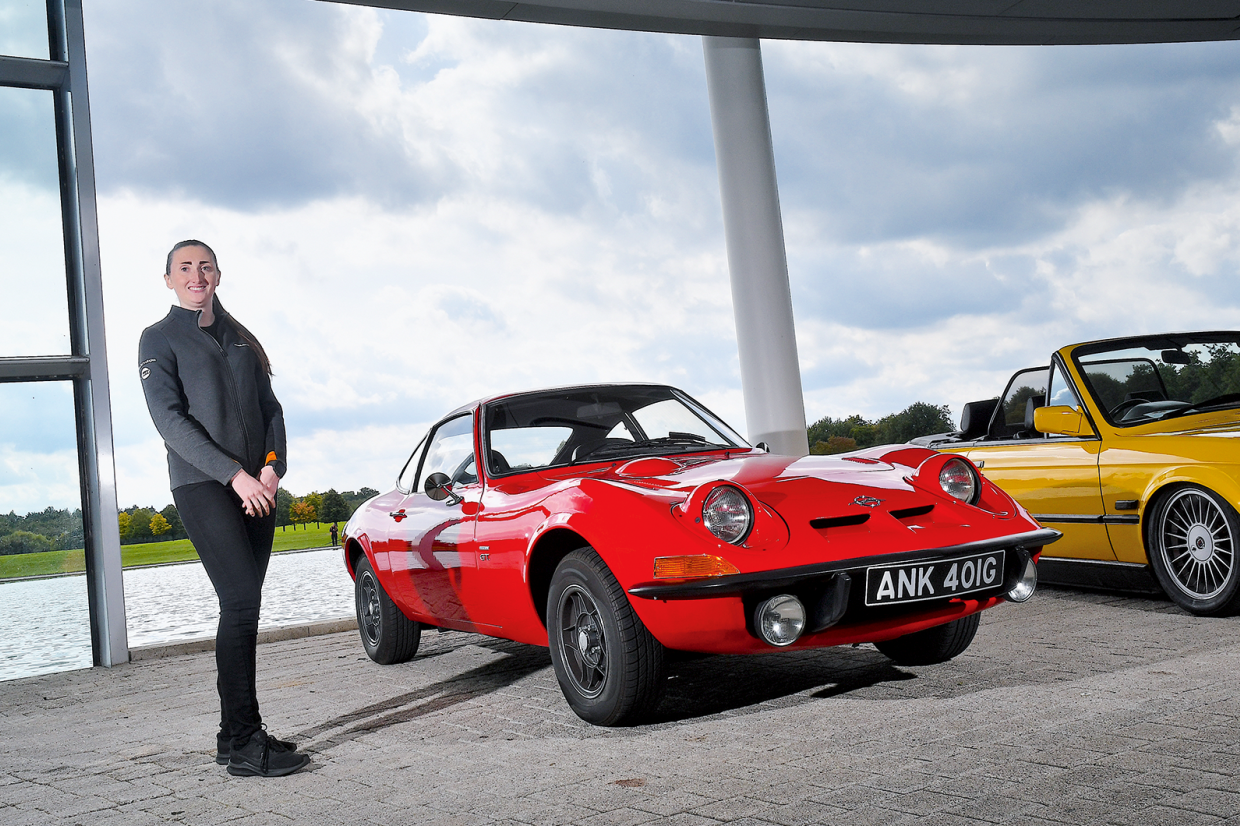 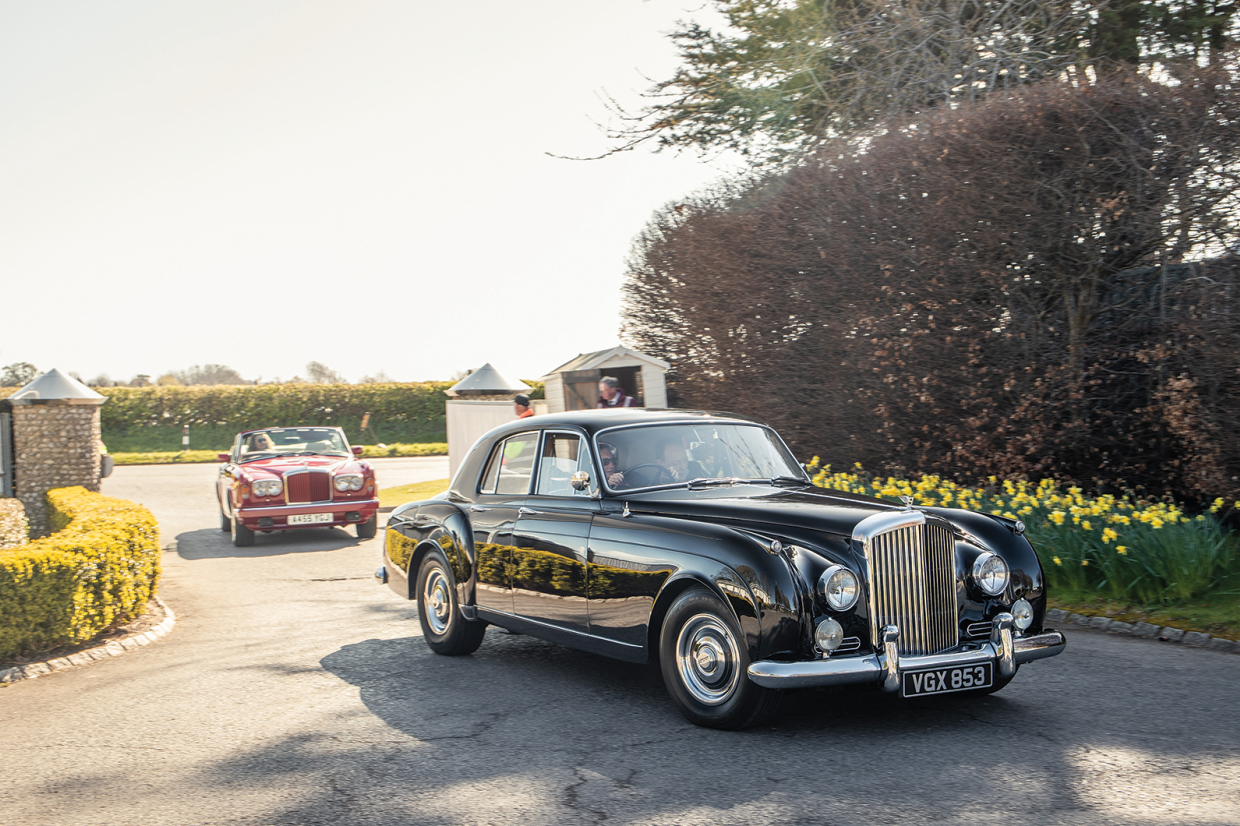 The soft lines and fine proportions of the one-off 1948 Lancia Aprilia Stabilimenti Farina Drophead, made for the Turin Salon, won my affections. Its interior is equally beautiful, including unusual ‘Paglia di Vienna’ trim. Dreams of being behind the wheel along Italian coastlines stuck with me.

Although my own recently acquired E30 325i has been a delight, the E46 M3 CSL (below left) I drove for the June issue was a special treat. Its spine-tingling soundtrack and resolute performance lived up to all the expectations that accompany the legendary CSL name.

The inaugural InterClassics Days of Elegance concours (below right), held in the beautiful grounds of Château St Gerlach, The Netherlands, was truly sensational from start to finish. To walk among the extraordinary array of cars as part of the judging team was an honour, and a great learning experience.

The beloved family camper has been sitting on the Our classics list all year, yet no tangible progress has been made. In 2023 I have to get the wheels rolling, but first I have to put the roof on – and hopefully all in time to enjoy a bit of the summer. 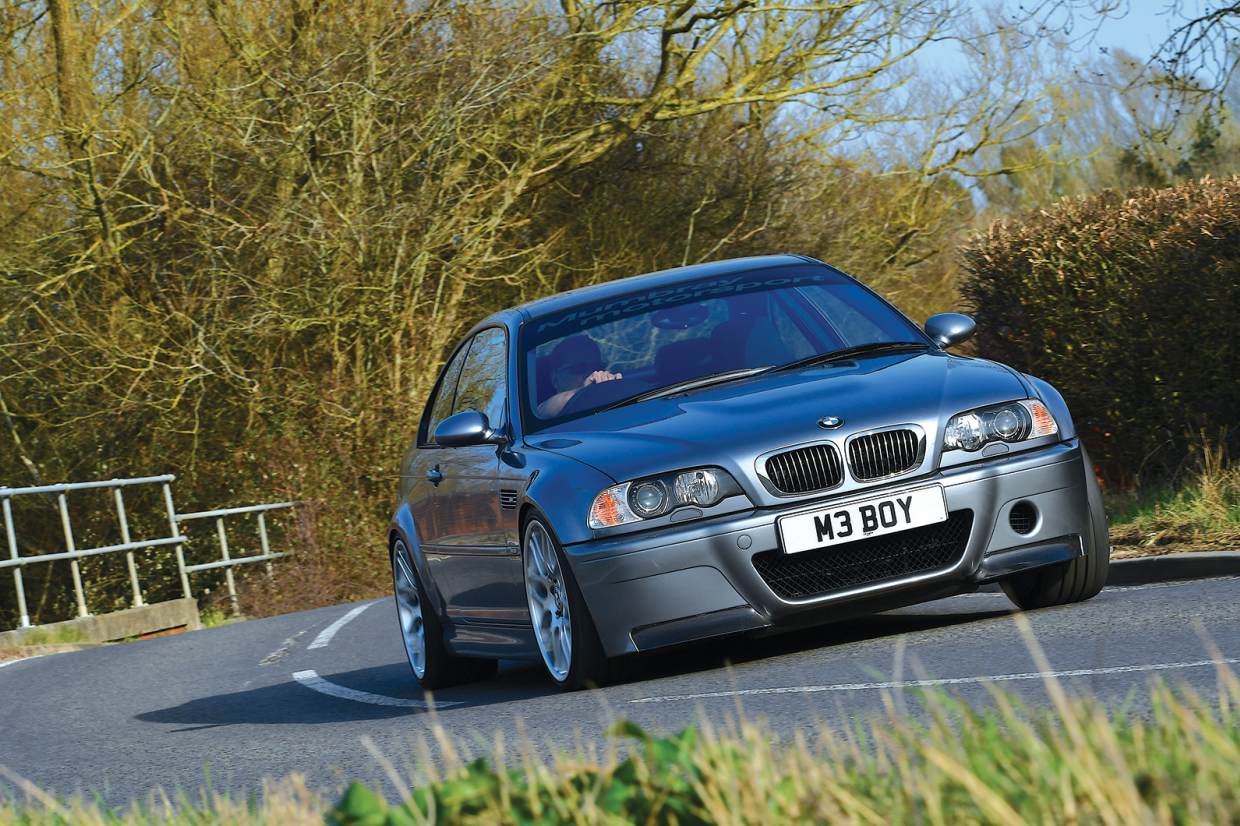 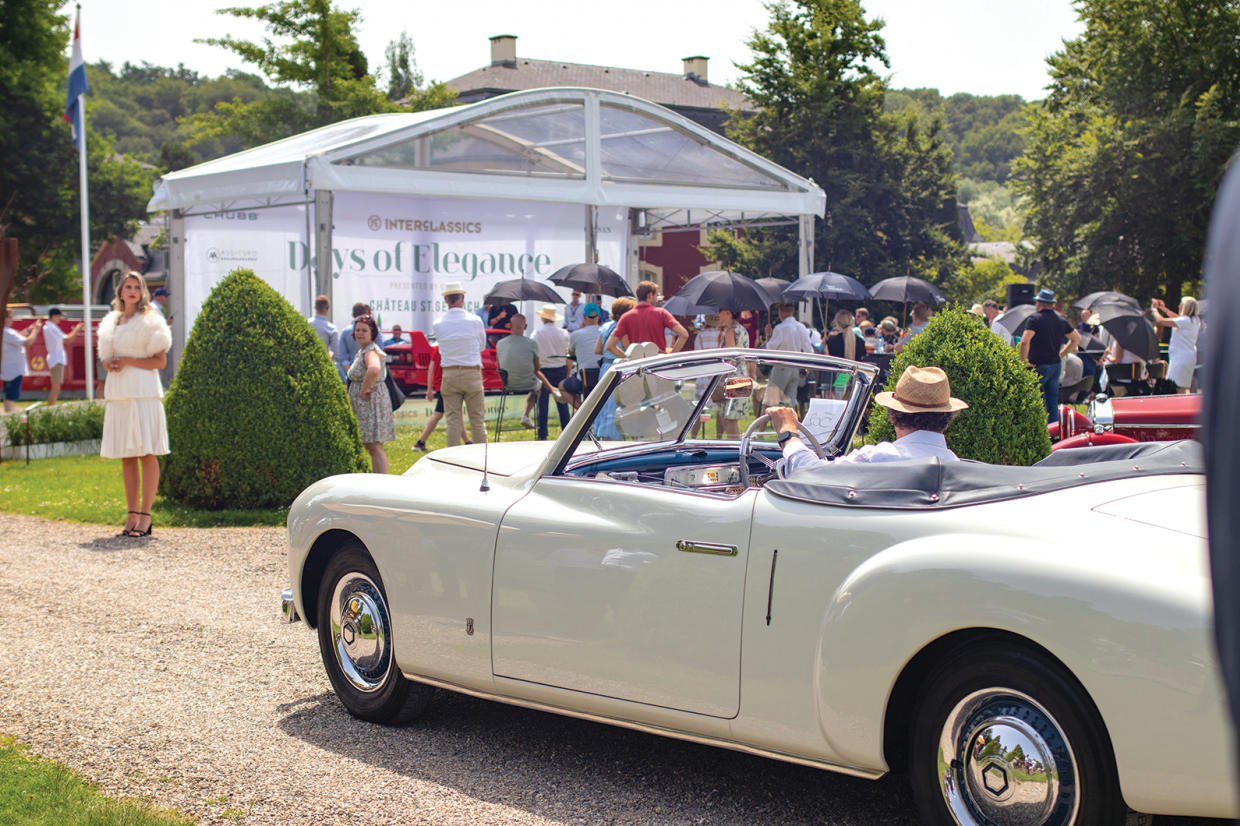 Predictably, it had to be a VW… or is it a Porsche? The jewel-like Dannenhauer & Stauss coachbuilt special (below) of Mark Reynolds does the impossible of making a Porsche 356 even more desirable. With simple engineering, elegantly clothed in hand-formed bodywork, it’s a perfect example of wonderfully Germanic form and function.

The feeling of freedom that came with driving a classic along empty French roads, with dappled light pushing through the tree-lined canopies on my way to the Spa Six Hours in September, was beautiful. Finding the scenic route was a no-brainer, and starting the day in the UK and finishing it in Belgium, after many hours of happiness, can’t be beaten.

My love of old racers and foreign road trips blended perfectly in the Le Mans Classic. There’s something magical about sitting on the grass in the fading sun, small bottle of beer in hand, listening to the rasp of racing Porsches chasing their prey through the French countryside. Magnifique!

More adventures for me and my trusty Fasty friend. I’m aiming to fill it with fuel and put a few stone-chips on the front as I make my way over to Wolfsburg for its 55th birthday. I’ve never been to the Volkswagen factory before, so it would be a fine way to tick that box and visit the birthplace of my lifelong passion. 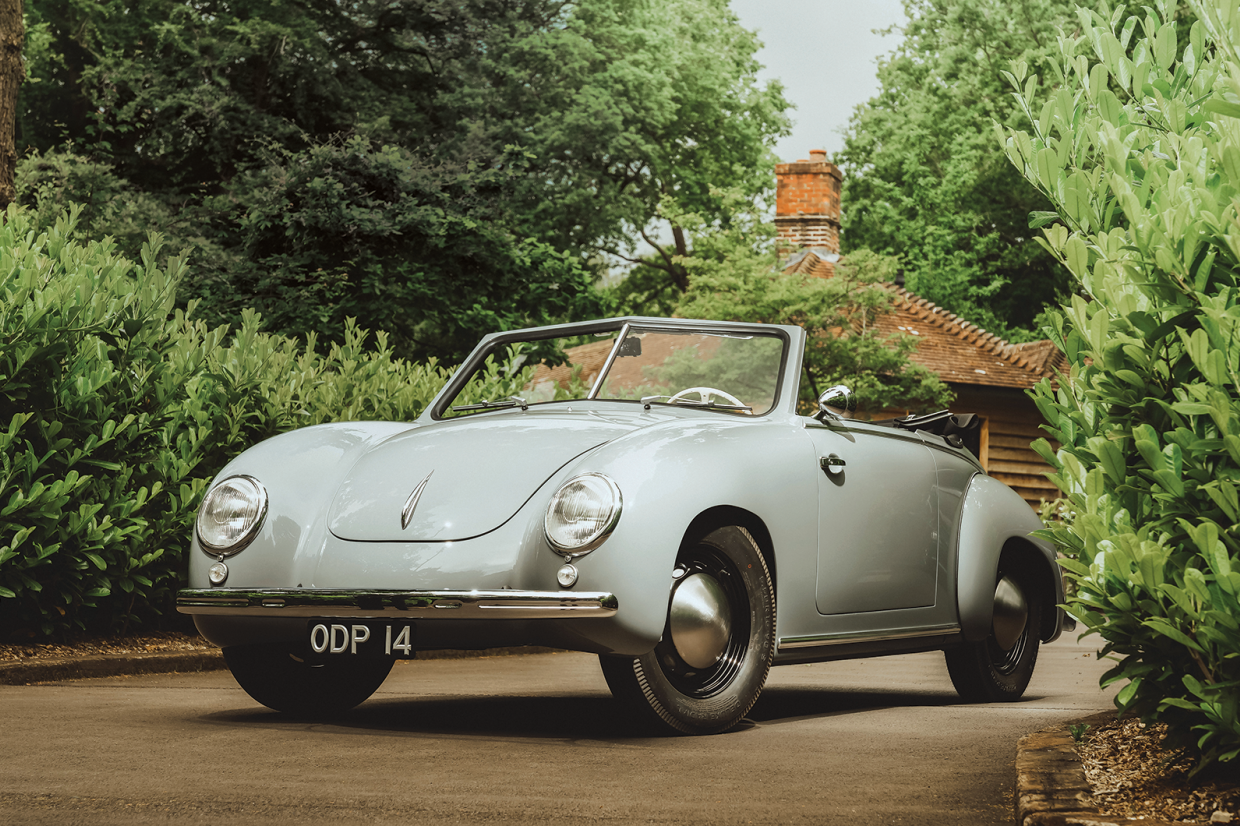 It may be a continuation project, but to witness a BRM V16 racing again at Goodwood (below left), with Rick Hall at the wheel and running in the company of ERA R4D, was epic.

The generous opportunity to drive one of the finest Alfa Romeo Monzas around Welsh border roads was unforgettable. Fresh from a masterful rebuild by Ben Collings, the ex-Jean-Pierre Wimille chassis 2211138 looked fabulous and drove beautifully. And the glorious unsilenced sound could be heard for miles around the valleys.

The return of my favourite concours, Chantilly Arts et Elegance (below right), was special. Inspired classes, a relaxed atmosphere and a spectacular venue, and meeting so many enthusiasts was a joy.

To celebrate my Lea-Francis 14hp Sports’ 75th birthday with a road trip along Ireland’s Wild Atlantic Way in memory of my much-missed pal Johnny Blundell. 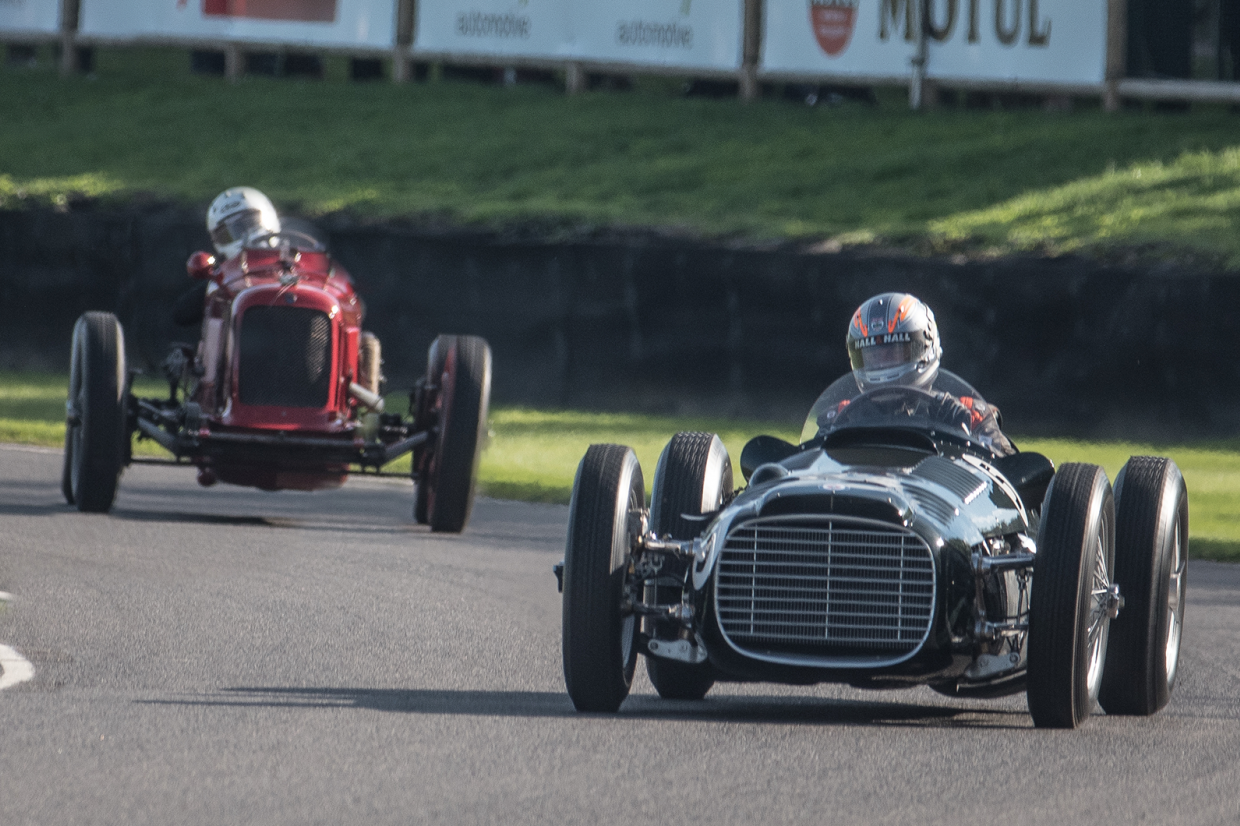 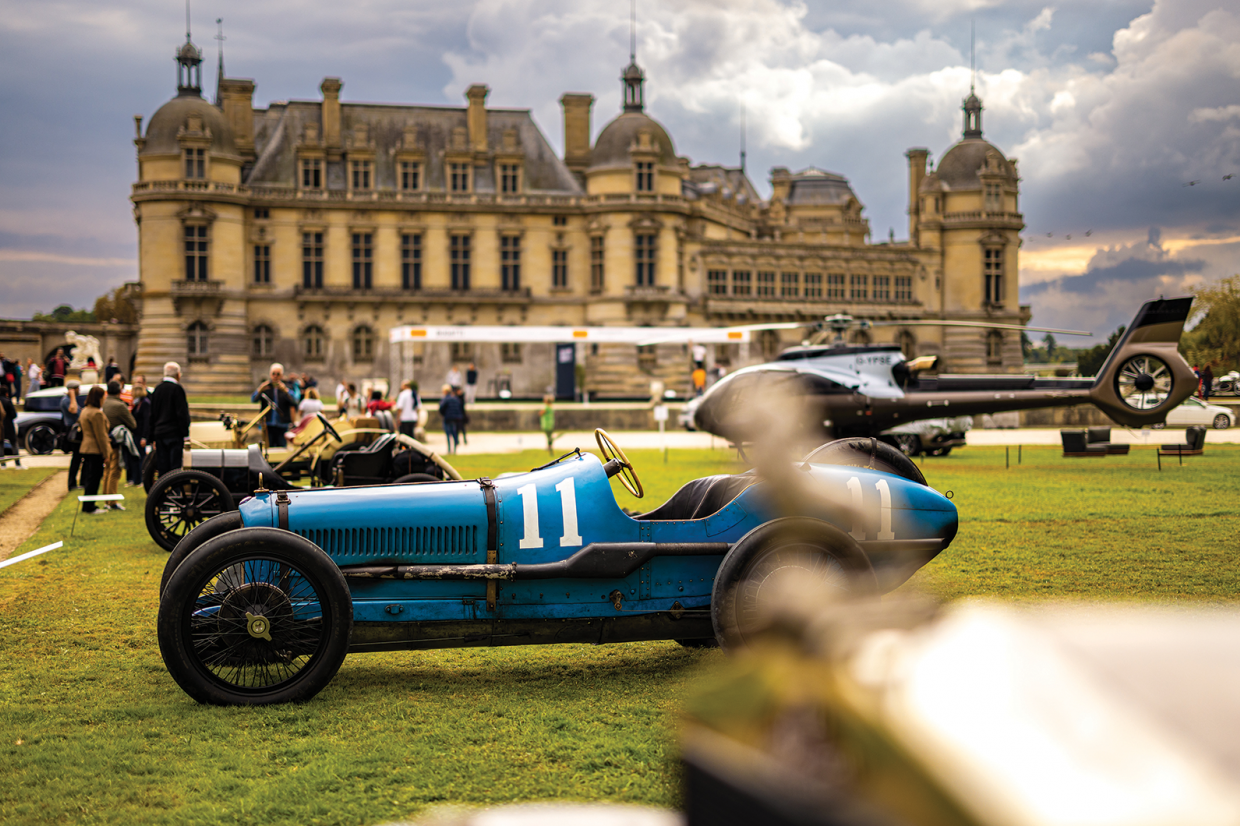 It’s always intriguing to see the past’s take on the future, such as Jules Verne, Dan Dare – or the wondrous Dubonnet Hispano-Suiza Xenia at Hampton Court’s Concours of Elegance (below left). It’s just like the dream cars I used to draw in my maths exercise book at school.

Taking time out from my usual route to Shelsley Walsh in the Stovebolt to discover demanding, hilly B-roads in the Worcestershire-Herefordshire borders, climbing out of the Wye valley, skirting the Radnor Forest and back to the Teme.

The relaxed, friendly and brilliant Shelsley Walsh Classic Nostalgia (below right) was wonderful – again. And all those BRMs!

To take the Stovebolt to Scotland (Doune or Bo’ness), the AC Ace to Paris, and the Bentley to the 90th anniversary of the Derby Bentley at Crewe and Chatsworth. 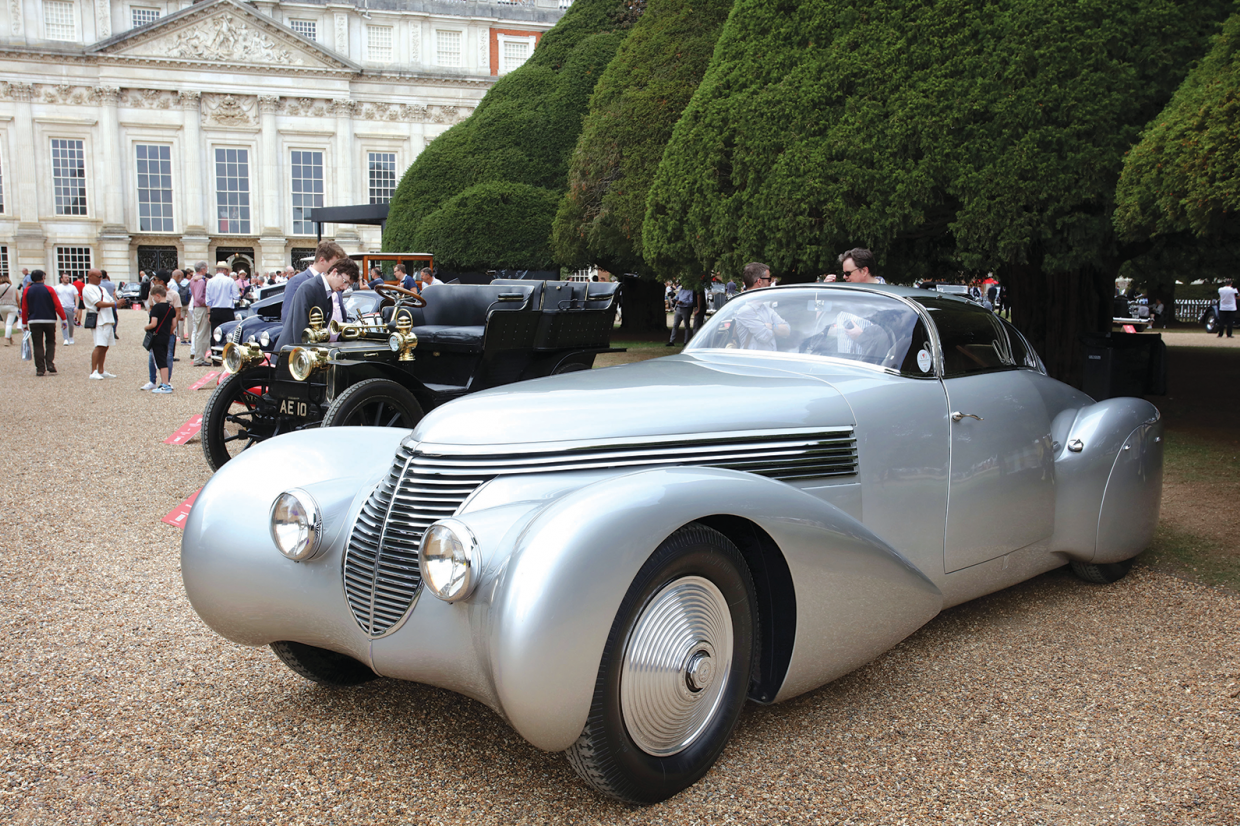 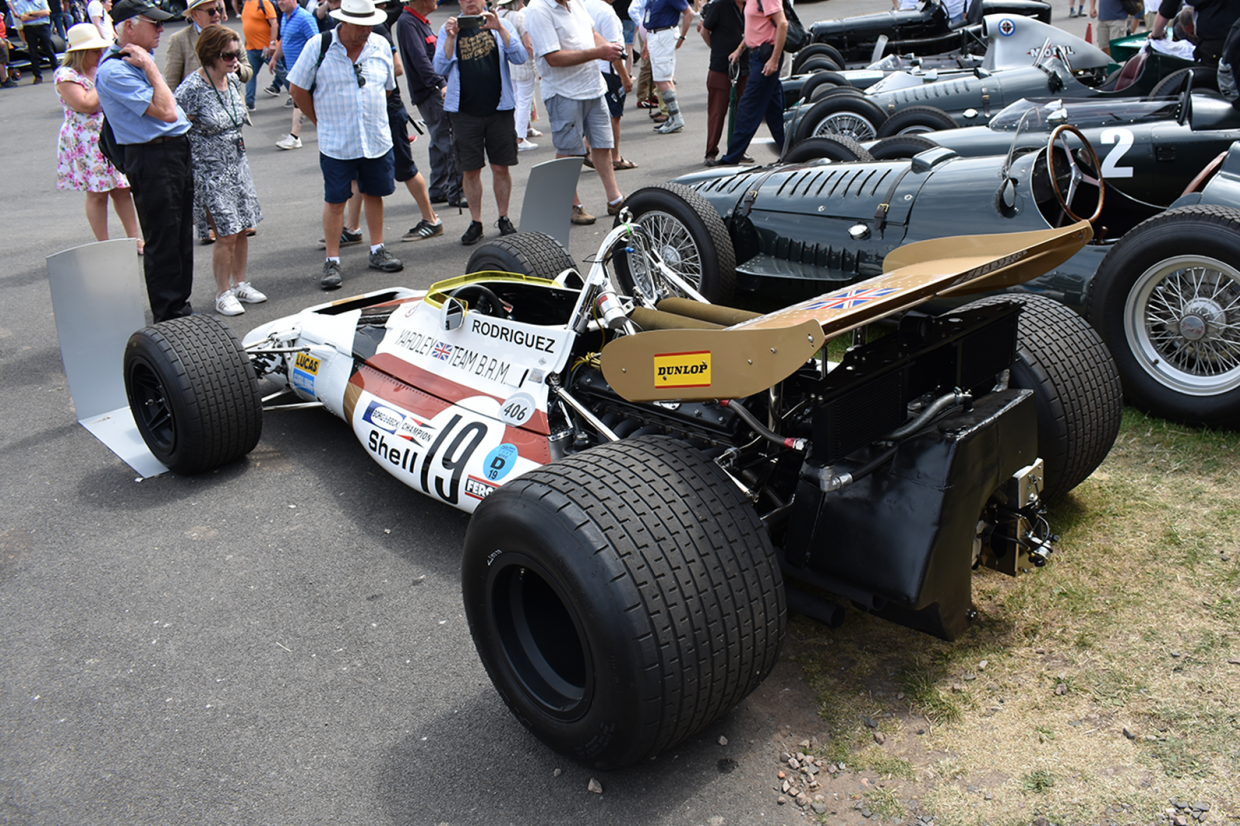 I visited the Guggenheim Bilbao in August, to see architect and car nut Norman Foster’s exhibition, Motion. Many of the stars, such as Norman’s own Dymaxion replica, were well publicised, but I had no idea that General Motors had brought all three of the surviving Firebird show cars. The Harley Earl concepts are rarely seen in Europe, and I particularly loved the 1959 Firebird III (below right), which contains clear cues to the design trends of the following decade.

The best driving experience I had this year was during our Datsun 240Z and Triumph TR6 December cover shoot at Dunsfold. It was my first time in a 240Z (below top), and Len Welch’s superb Datsun blew away my preconceptions, being both sportier and simultaneously more refined than I’d expected.

Good racing is a given at the Le Mans Classic, but I hadn’t anticipated the variety of cars on show around the circuit. I simply didn’t have the energy to explore them all, even over three days. It’s a Mecca for Europe’s classic car world, and I’d even recommend it to those who aren’t that fussed about the competition.

I haven’t done enough interesting drives of my own this year, with life getting in the way, but I’ve got no excuses in 2023. So my plan is to take my Smart Roadster Coupé (below left) on at least two road trips – one to Scotland and one to the Continent, but I won’t set myself up for failure by being too specific. 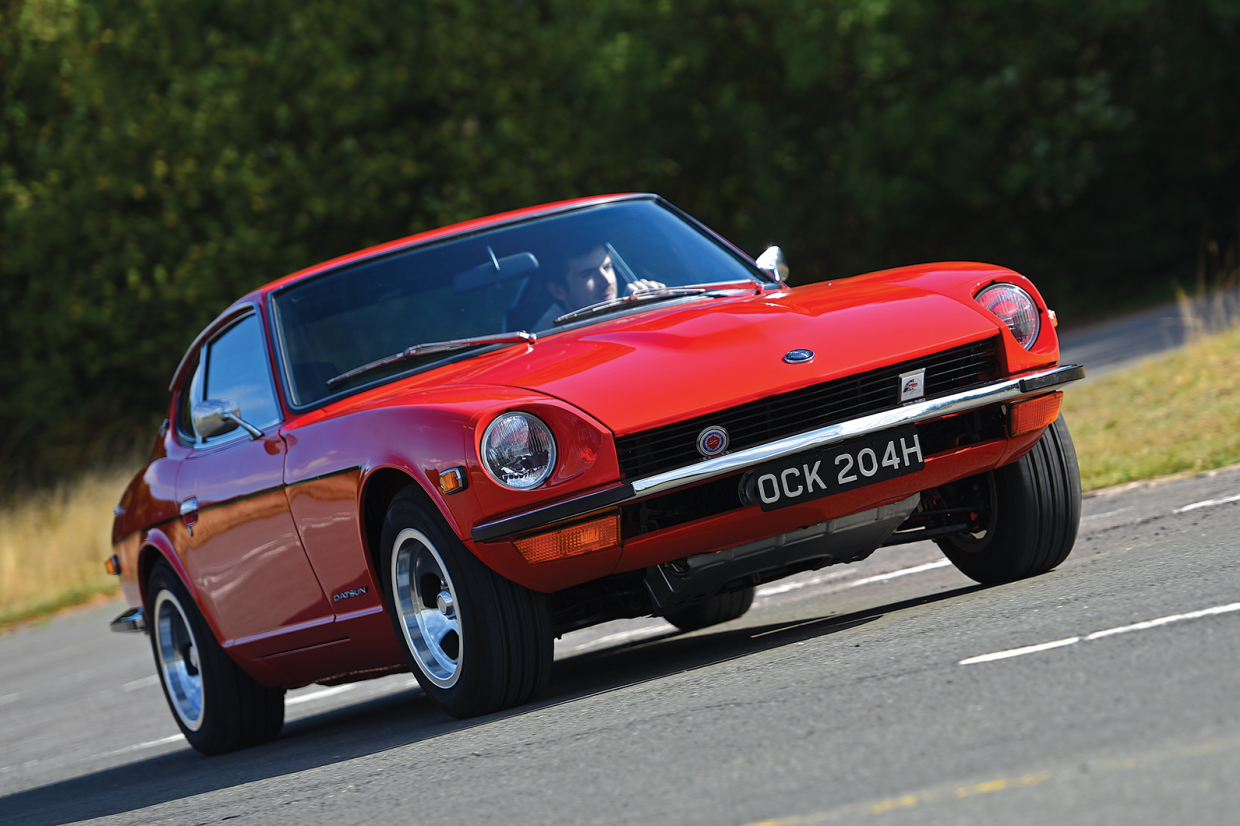 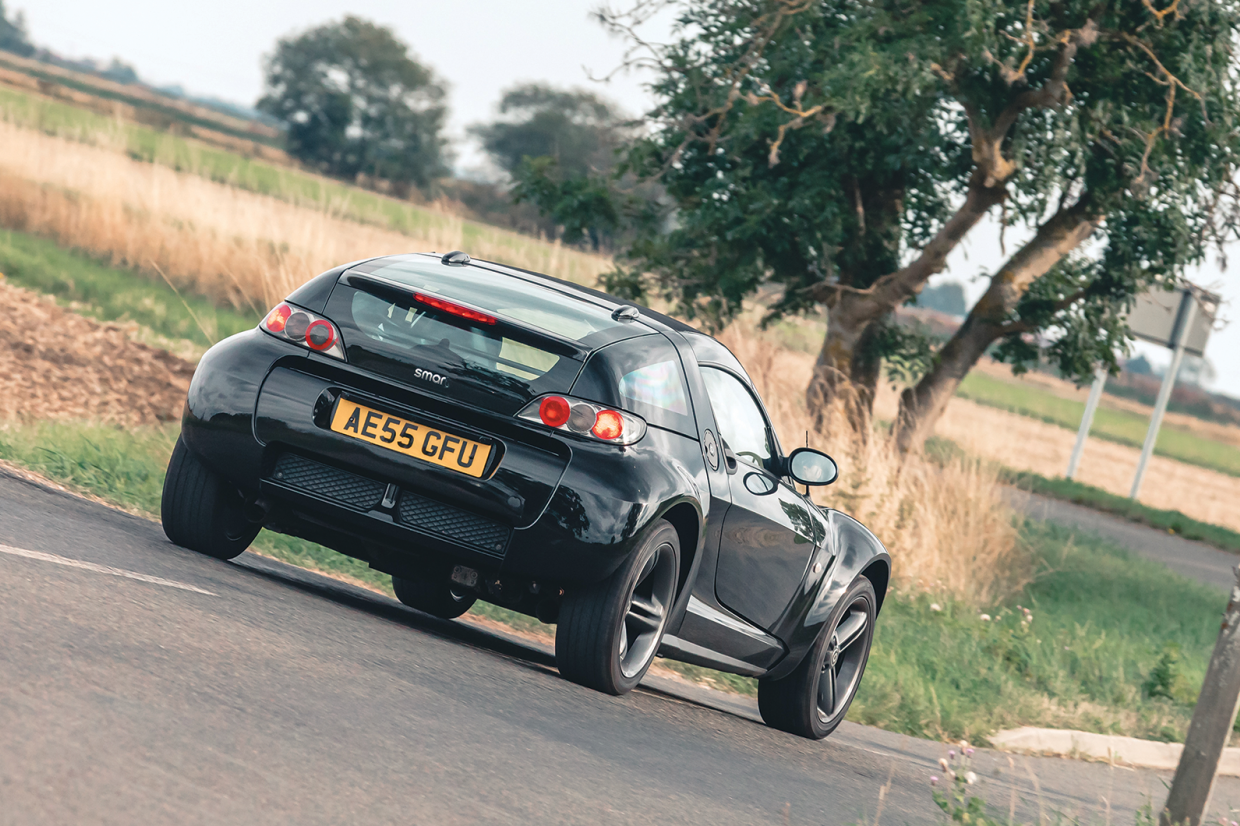 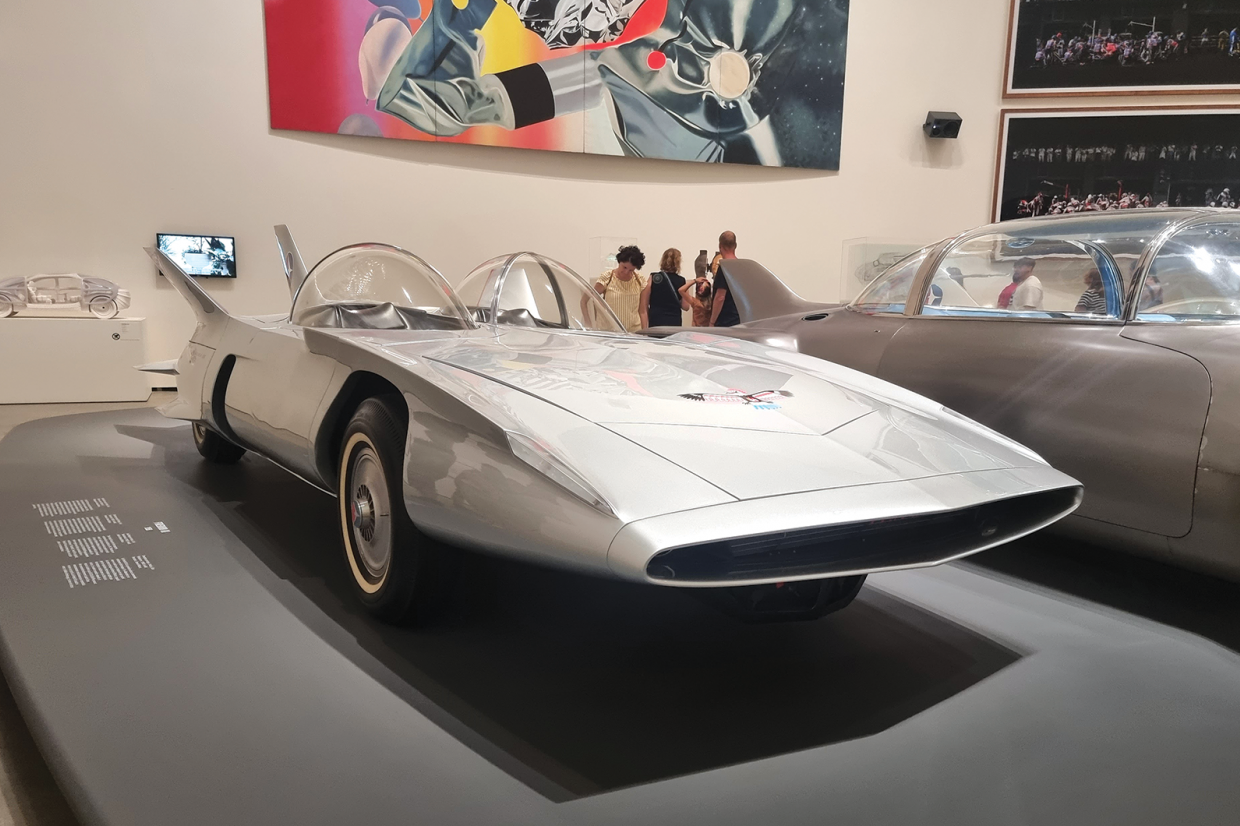 I’ve always wanted to drive a Lagonda V12, the WO Bentley-designed masterpiece, and the saloon I tried for the April issue (below) didn’t disappoint. Its refinement caused me to marvel at how far the automobile had advanced, 40 years or so since the first horseless carriages. Easy gearchanging, 100mph-plus and 0-60mph in the low teens… in 1938!

Giving my manual-overdrive Jaguar 420G some autumn exercise along the Fosse Way, from Cirencester to Marton. Even my Merc-obsessed co-driver had to admit that it’s a blinding car, despite me cooking the brakes (fluid change required, I think).

The London to Brighton Veteran Car Run is great to watch, just for the atmosphere and sense of tradition, and it was an honour to ride in one of the cars – even if we didn’t make it beyond SE1.

Get my Lancia Flaminia on the road, drive a Rolls-Royce Phantom III and buy a Lotus Elite that works. Or a Rover P6… or a Renault 16… 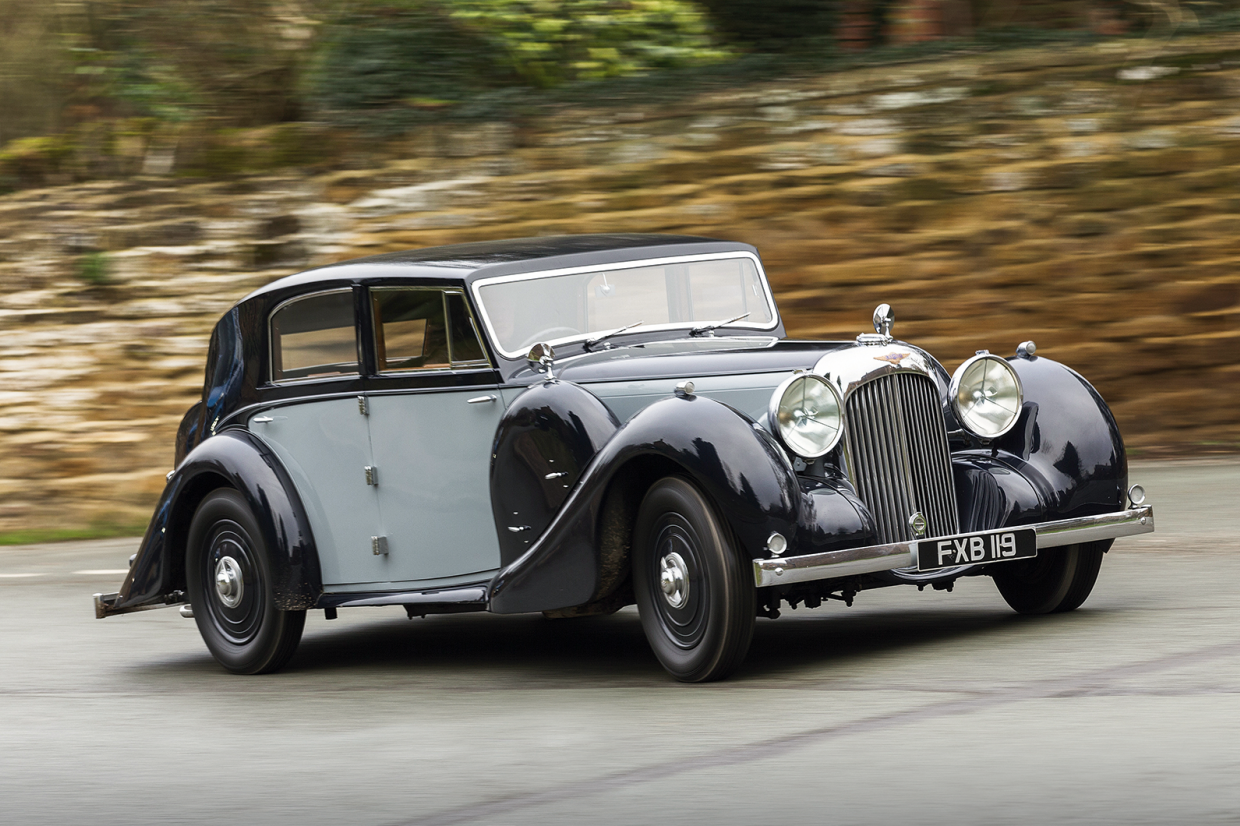 It is a strange but brilliant experience to shoot in central London at 2am, and it’s not often you get the freedom of Chinatown, so this Toyota Corolla AE86 story (April) started the year with a bang.

In the middle of a long-exposure static, a rickshaw with enough lights to rival Times Square flew past, creating the vibrant streak on the left of the frame.

This beautiful accident led to a test of my Photoshop skills to match it on the other side. It’s fair to say I am pleased with the result. 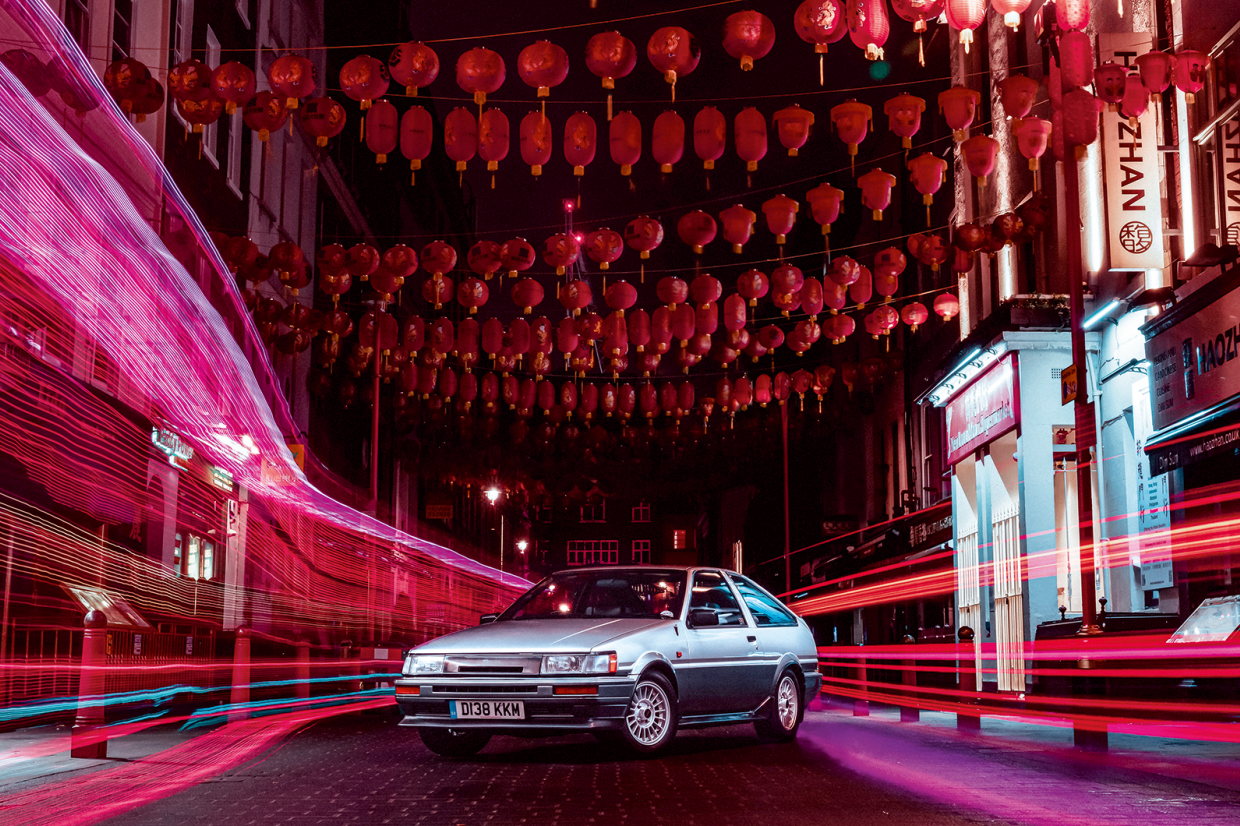 My choice is this beautiful Venezuelan AC Ace Bristol (November), for the moody sky and the blur as it whizzed around the bumpy corners at Bicester Heritage.

I like the way the wheel spinners are caught at a 10th of a second, and the way the soft light picks out those curvy wing-tops.

Shame you needed to be a contortionist to get behind the wheel, but that might be more to do with me than the AC… 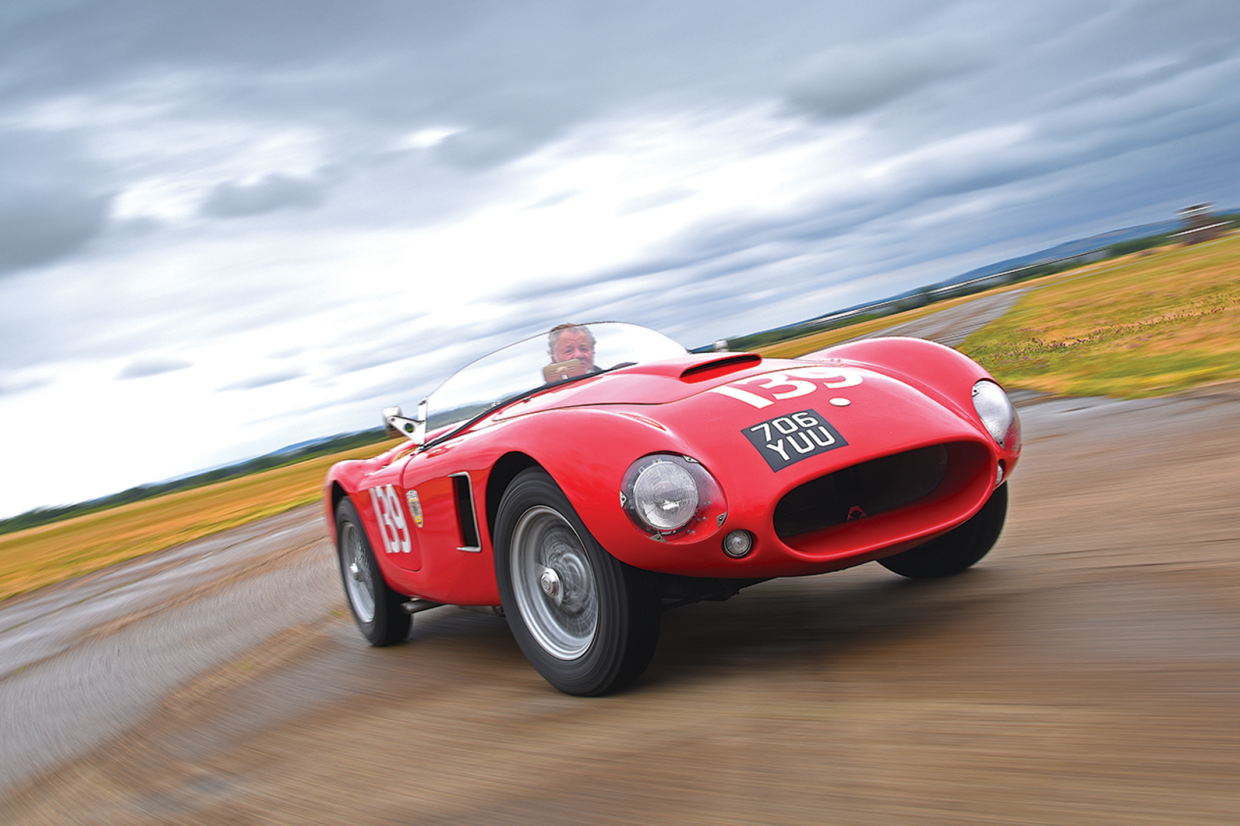 For this tracking image of the Bentley 3 Litre Super Sports (July) I decided to use a small rig attached to the rear door of the camera car, which allows for a dramatic angle and a slower shutter speed to give more blur.

We ran along a quiet section of the old A3, lined with trees on both sides, and even hanging nearly upside-down out of the side window to fire the shutter I knew we’d nailed the shot. 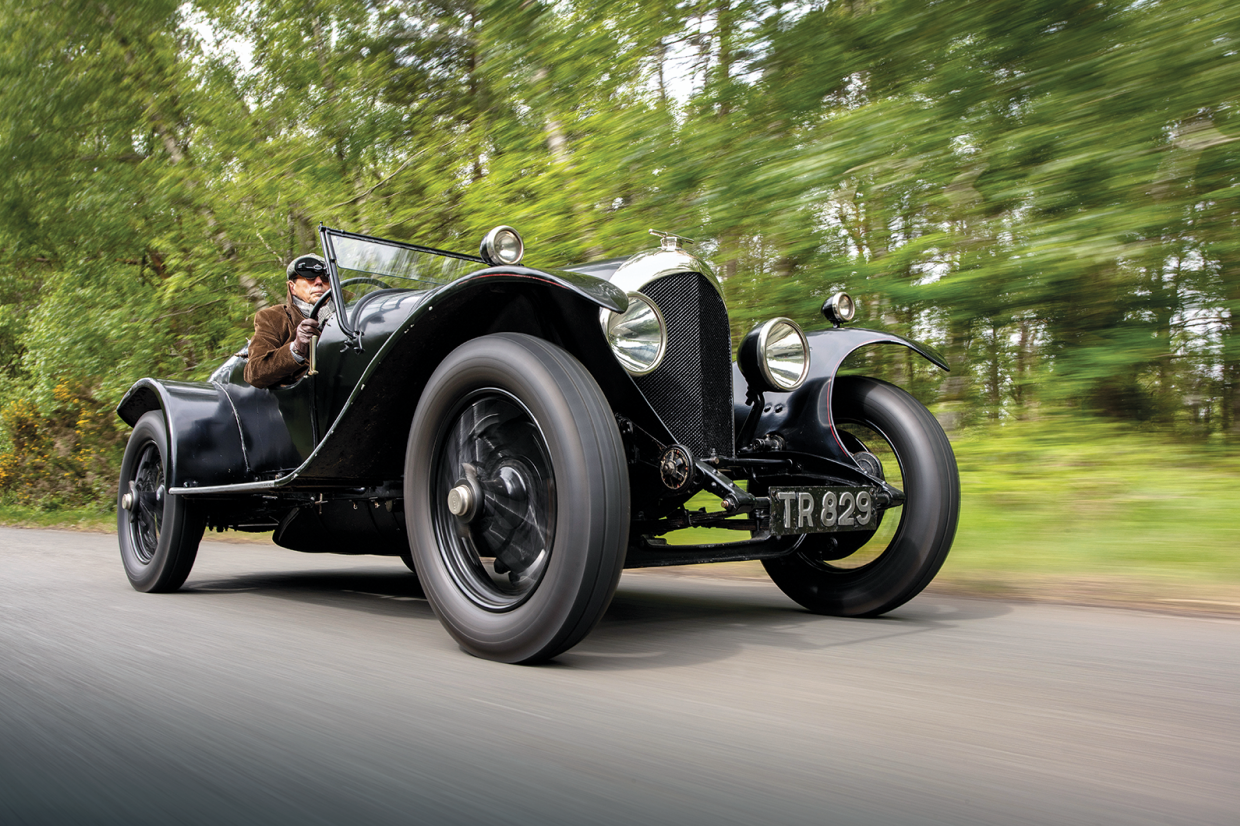 I’ve chosen this shot of our anniversary set of Ford Cortinas (October) because I enjoy setting up lots of cars in a nice group – especially when they are such vibrant colours.

Art man Damon suggested using the yellow lines on the runway at Conington airfield to anchor the picture, which was a really good shout. 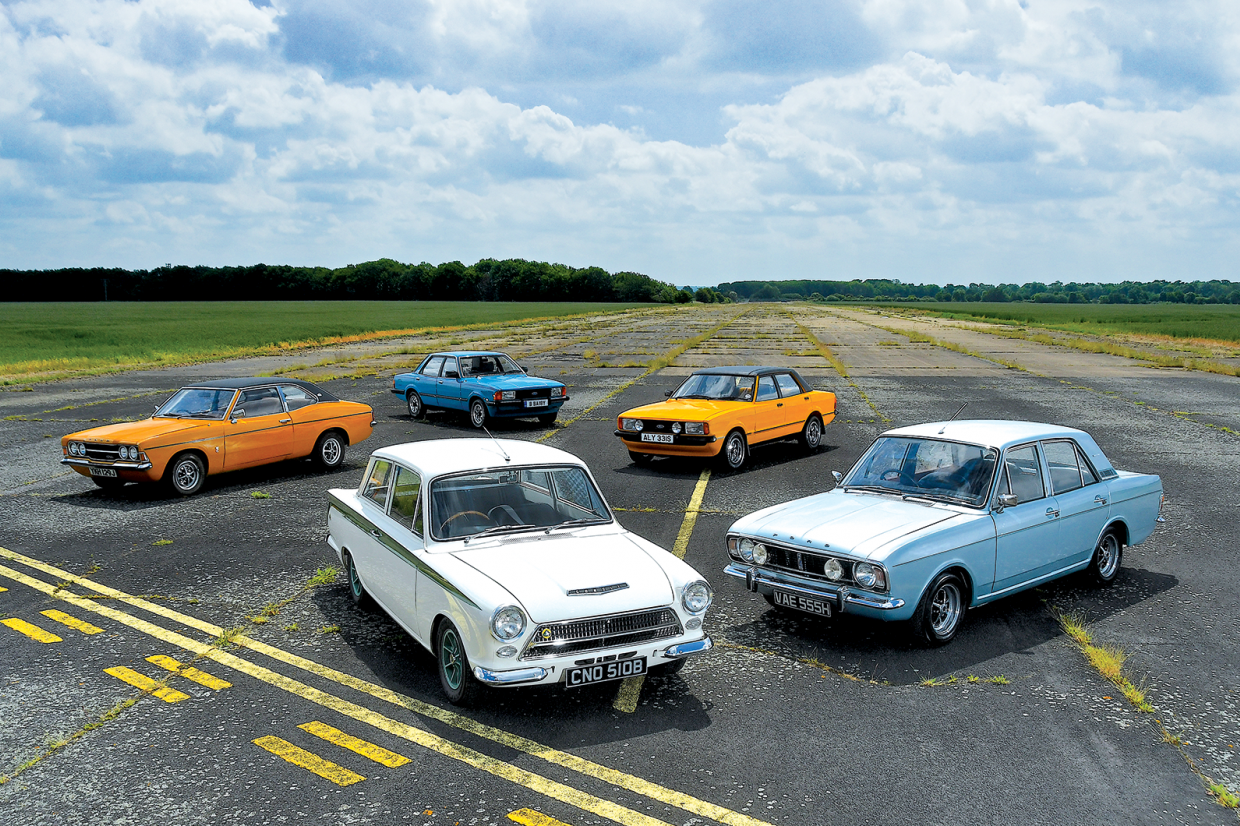 The V8-powered Jaguar E-type ‘Egal’ we shot for our September cover was just so raw.

The huge Ford Galaxie engine was deafeningly loud and the car had so much presence.

Dappled light can be tricky at times, but it worked fantastically well for this tracking shot. 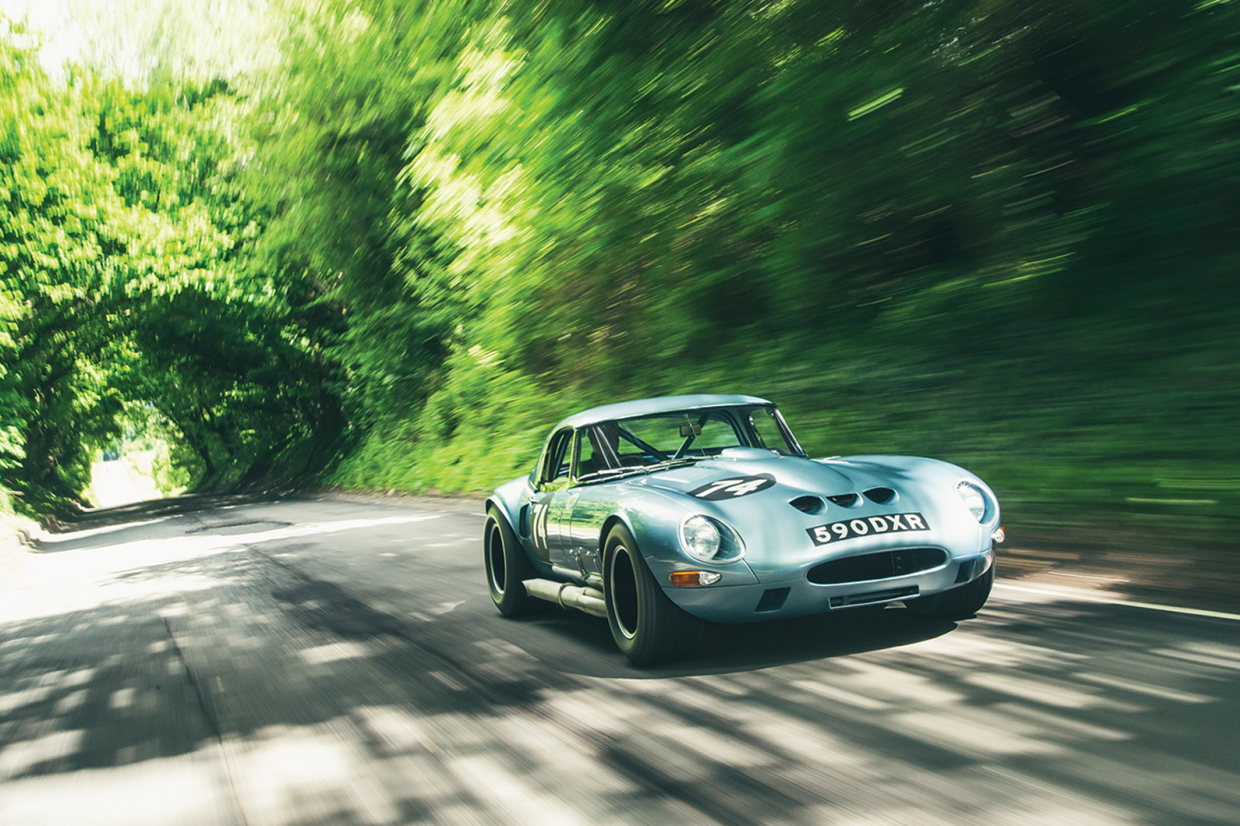 Austin Seven at 100: the car that got Britain moving