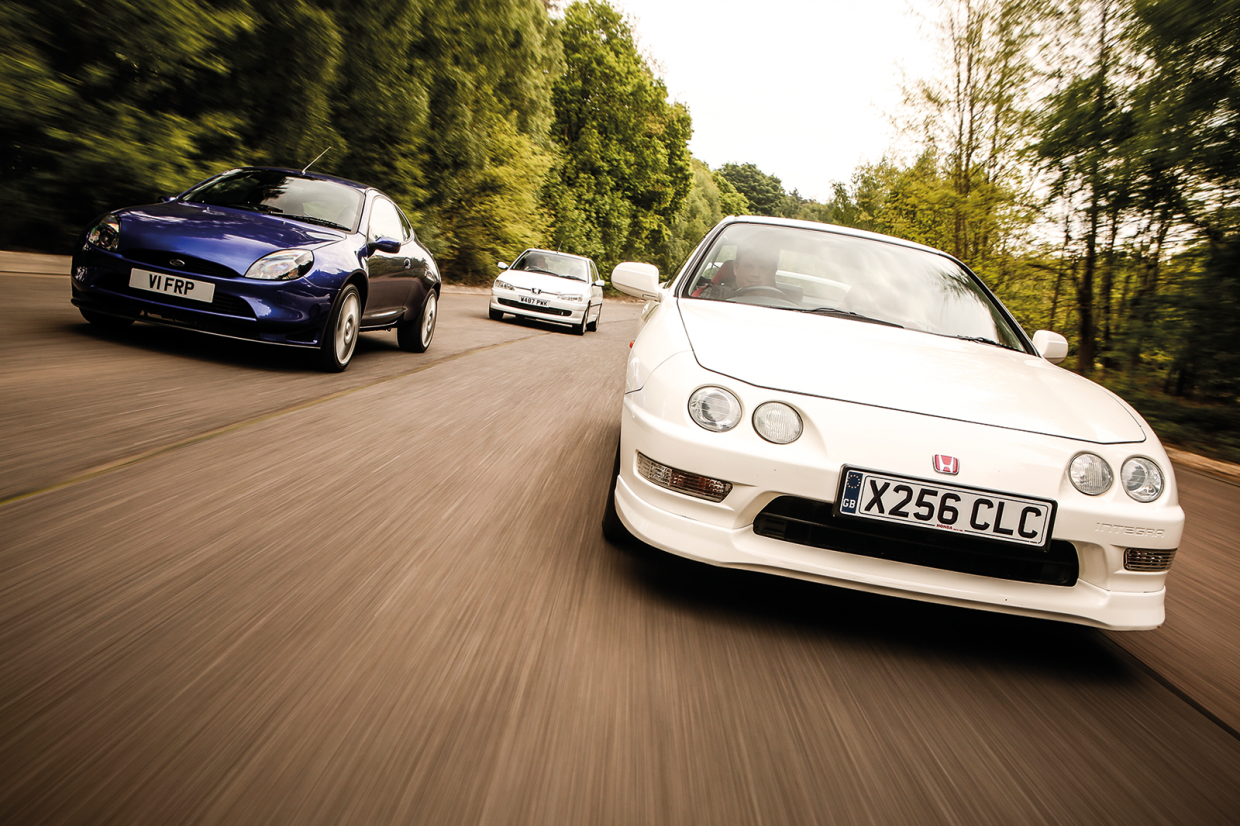 A coincidence is being delivered.

Slowly emerging out of its contained darkness, daylight dribbles then pours all over it. Illuminating details and surfaces.

The idea for this article actually dates from when I was a freshly minted scribbler. One who lacked a comprehension of mortality or a no-claims bonus, and who fell for the charms of a striking buzzbox.

That press car planted a fondness for frenzied rascals that excelled in stop, go and handling. It was a Ford Racing Puma, the first one built – and, as you’ve probably guessed, it was this car: V1 FRP. 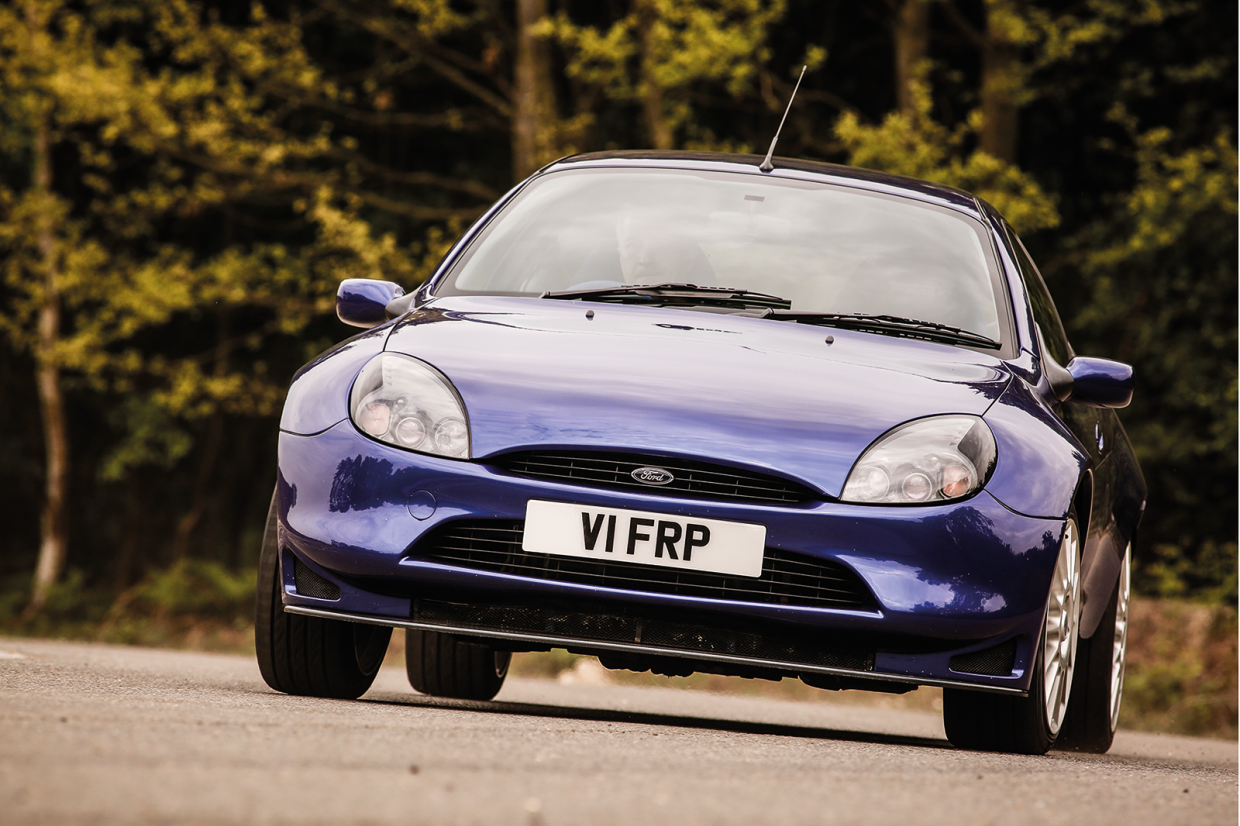 What the Puma lacks in grunt, it more than makes up for with sharp handling

The reason they are here, though, is more about what they represented in the 20th century’s swansong.

A now extinct naturally aspirated tribe that placed high-revving full-blooded driving pleasure ahead of everything, bar a roof and an attainable price-tag.

The 1990s were not good times for hot hatches and performance cars. If they weren’t pinched by joy-riders and ram-raiders, they became untouchable due to painful insurance premiums.

Many manufacturers either rebadged their GTIs or abandoned the sector altogether. Fortunately for us, though, the French remained true to the hot-hatch espirit de corps. 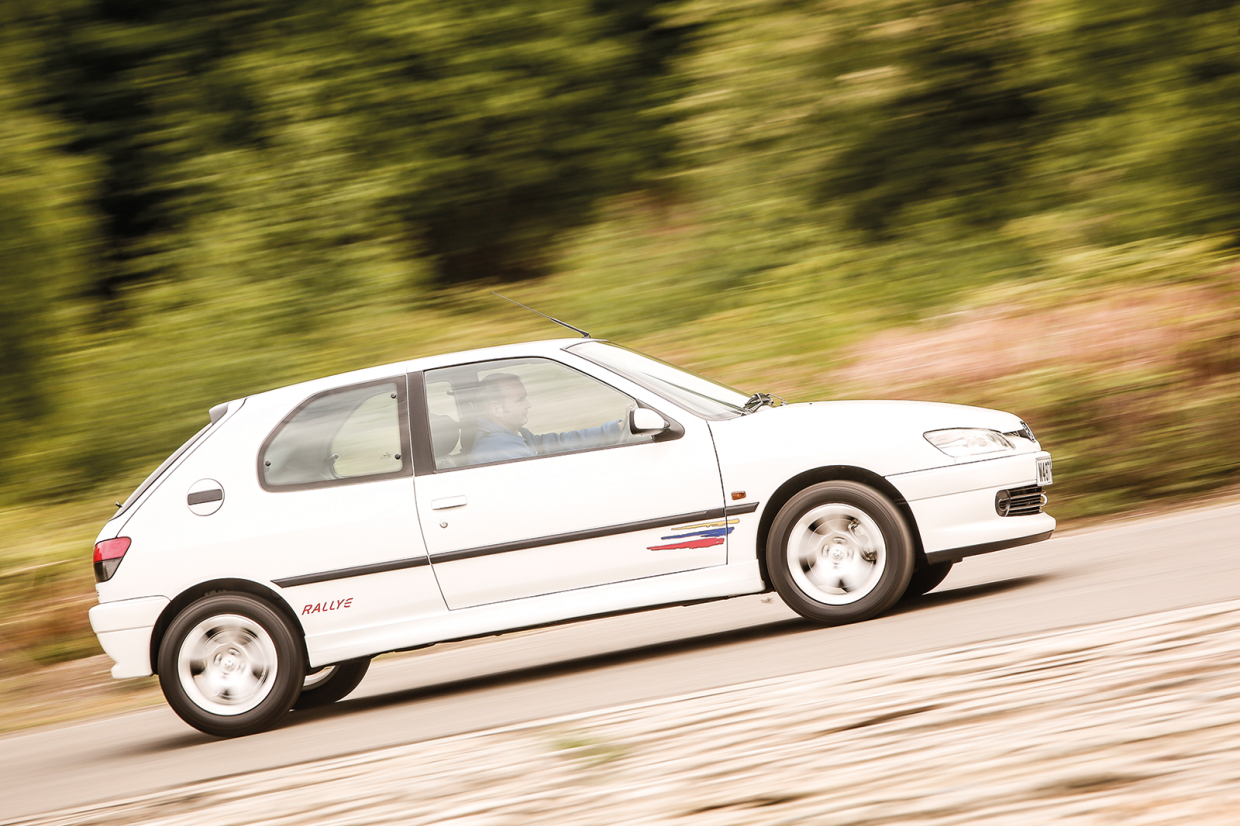 The snazzy Peugeot is understated in this company

PSA had replaced Peugeot’s 205 and 309 with models that shared platforms with sister Citroëns. The 306 was a modernised, enlarged 205 based on the Citroën GSA’s tardy replacement, the ZX.

The 1998 306 Rallye was a distillation of Peugeot’s glory days. This UK-only model used a nameplate that had appeared on both the 205 and 106, and was based on the highly regarded, svelte Phase II 306GTI-6.

Weighing 2644lb (115lb lighter than the GTI-6) it had shed a lot of hefty electrical clobber, 40:60 folding rear seats and even some sound deadening. 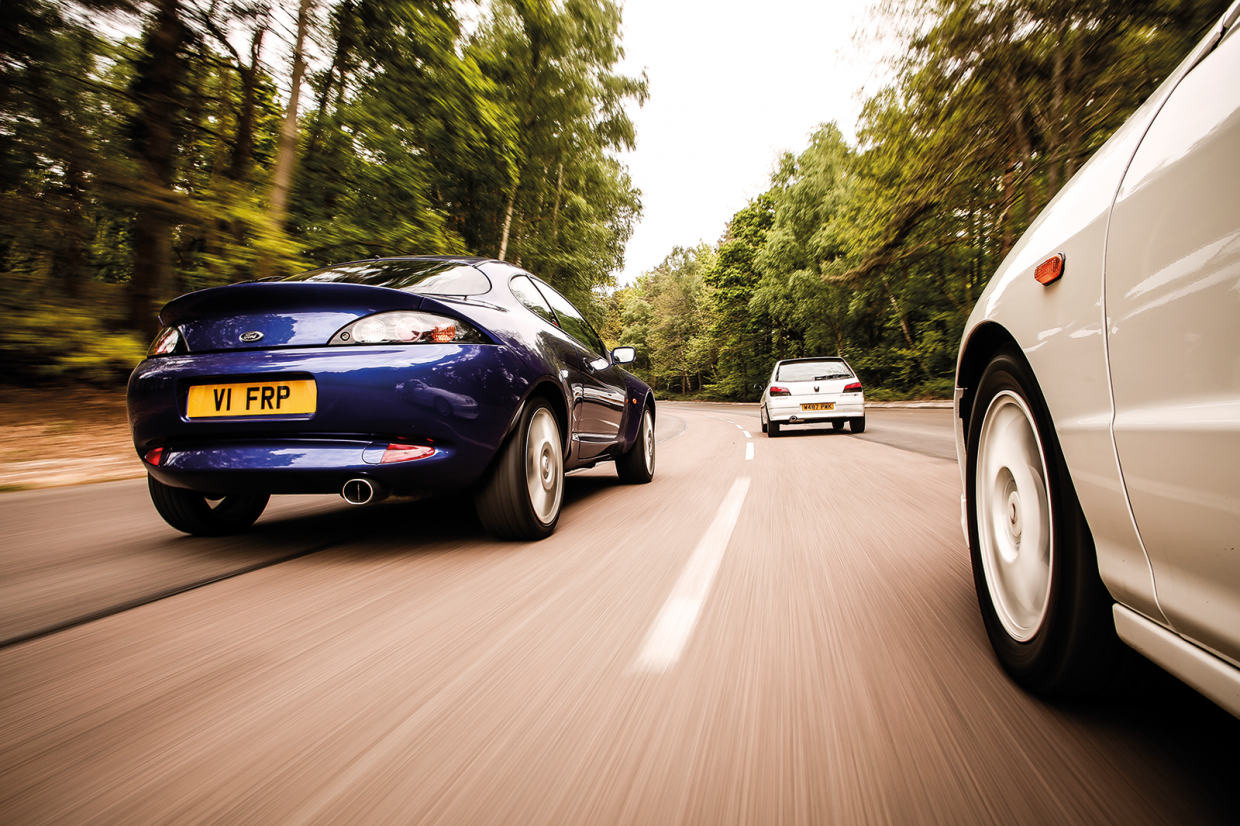 It is easy to imagine the Rallye regarding the others with contempt.

It’s ‘too cool for school’ and is only sporting a few stickers over its Bianca White paint – like a dressed-down James Hunt donning trainers for a society ball.

There is, though, something praiseworthy and damnable about its delightful plastic-rimmed, sans-culotte, manual-wound honesty.

It almost says: “All you need know is that I am chic, light and lively – and we will have fun, d’accord?” 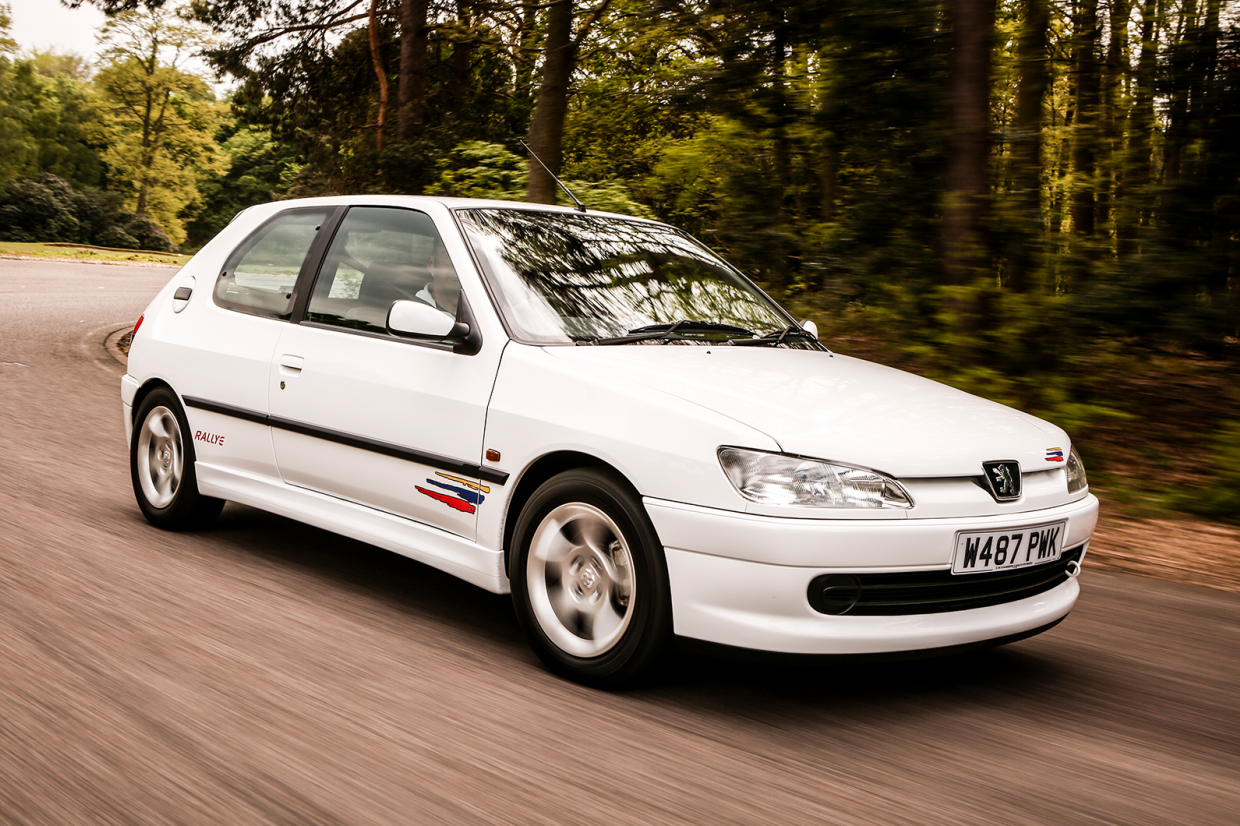 Honda’s original 1980s Integra was an awkward, bland five-door when it first landed in Blighty.

After skipping a generation, the name returned in late 1997 on the Integra Type R. Yes, its old-fashioned coupé lines were somewhat gawky – self-consciously hiding behind quad headlamps and spoilers.

It still looked very 1980s and had a touch of the space shuttle about it due to its Group N homologation and, initially, only coming in Championship White.

It had a black dashboard from yesteryear, burlesque red Recaro bucket seats and, despite this being the height of the Max Power pandemic, matching white alloy wheels like 15in doilies. 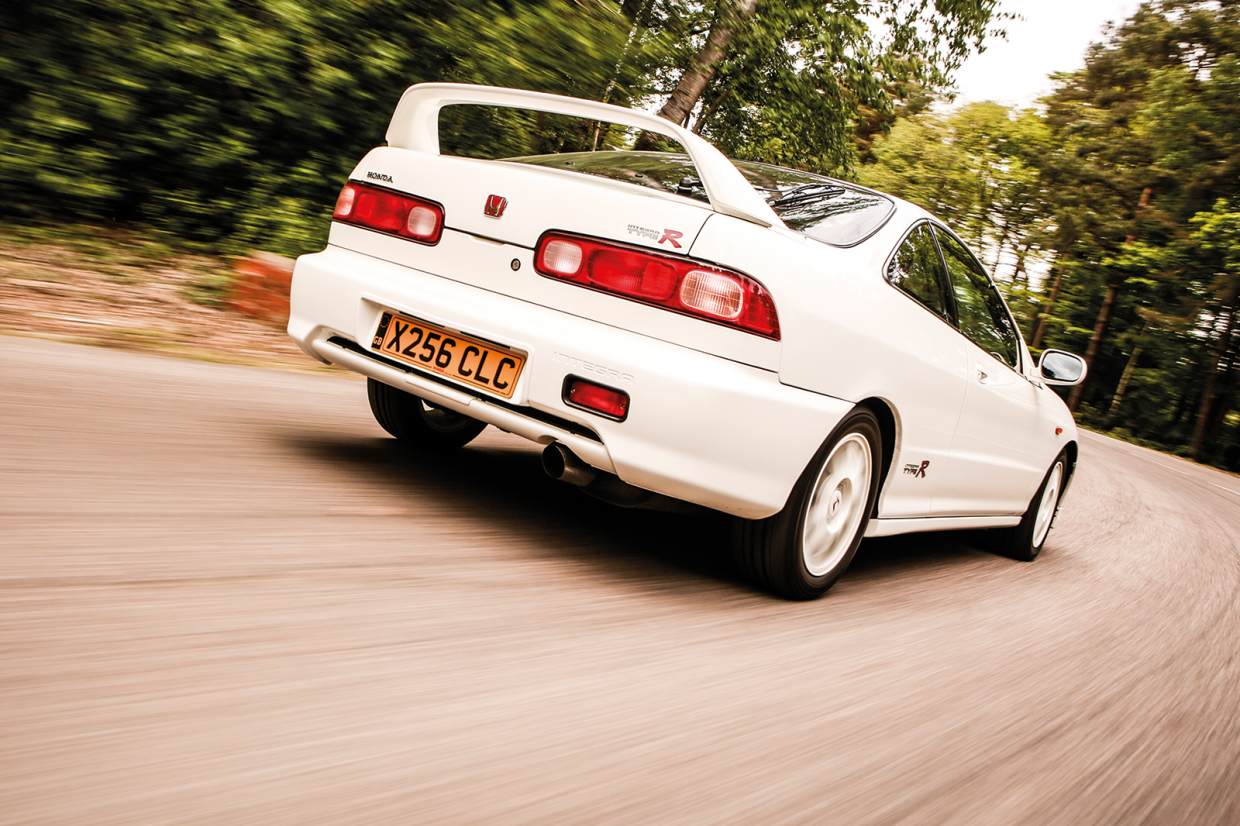 The Honda’s styling is not subtle

Yet cometh the 145mph Integra’s hour on the tarmac, it could dent the egos of far grander machines.

Just as other manufacturers disowned their sporting offspring, Honda caught the competition kipping with this bombastic anomaly.

The 1997 Puma was wrapped in ‘New Edge’ design, with a superb chassis overseen by the Blue Oval’s dynamic saviour, Richard Parry-Jones.

The press loved this MkIV Fiesta in tight-fitting glad rags. 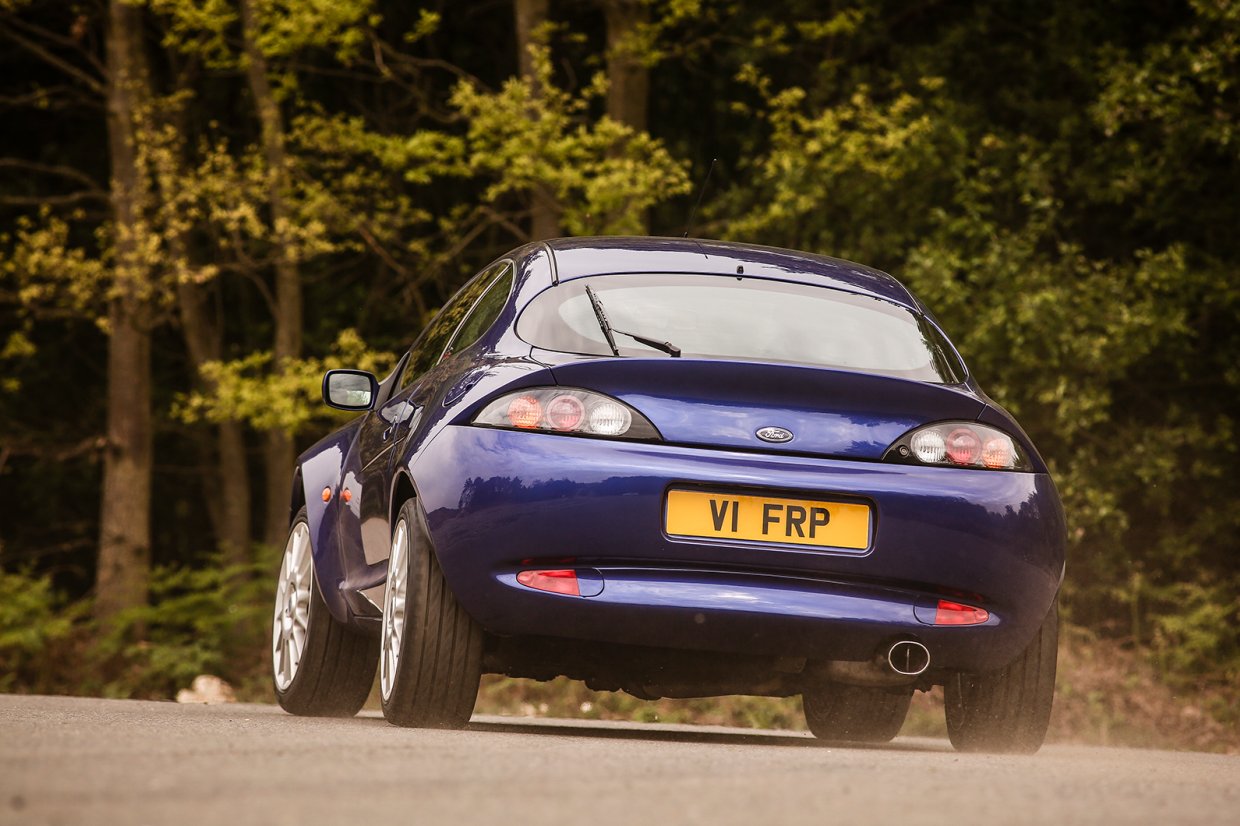 Steve McQueen even took a break from death to advertise it in a slick CGI homage to Bullitt.

It was a hoot and it sold like entertaining Fords always do. Yet powered by 1.4-, later 1.6-, and 1.7-litre Zetec SE 16-valve twin-cams, it lacked a range-topper with real ginger in its combustion chambers.

Planned as a show concept, the Evolution was a hybrid – a wide-bodied 300bhp Puma with Group A Escort WRC underpinnings – created to a brief from Ford Racing and developed at Boreham.

It would share its body design with the rally kit-car Puma VK14, VK16 and the concept ST160, sire of the delicious Ford Racing Puma. 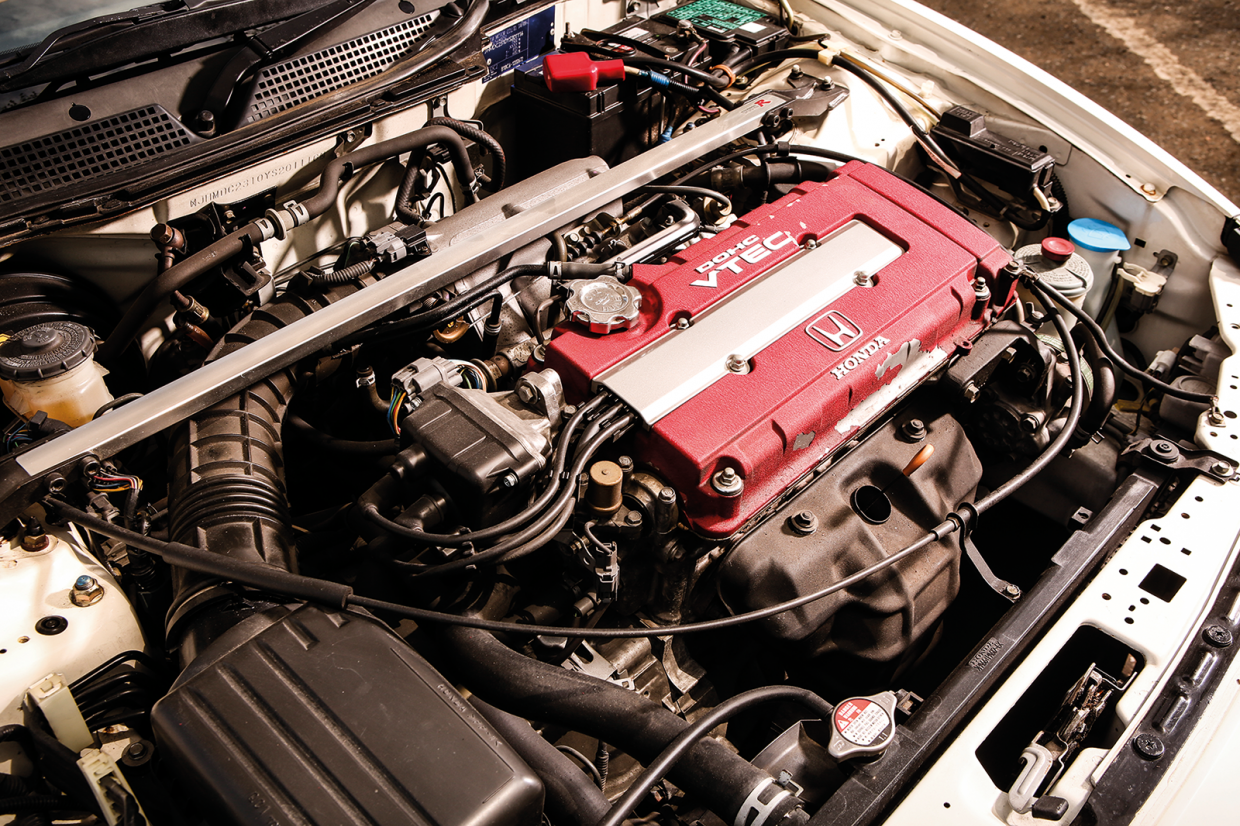 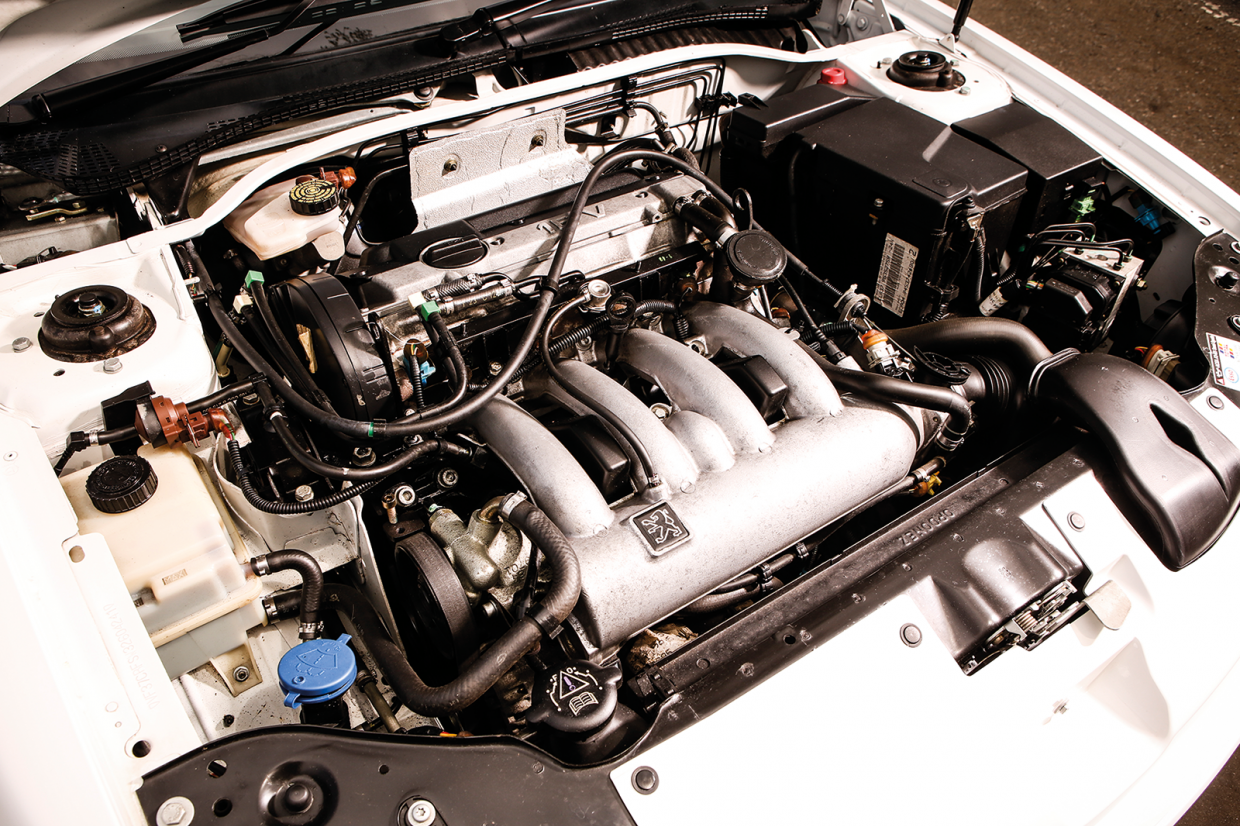 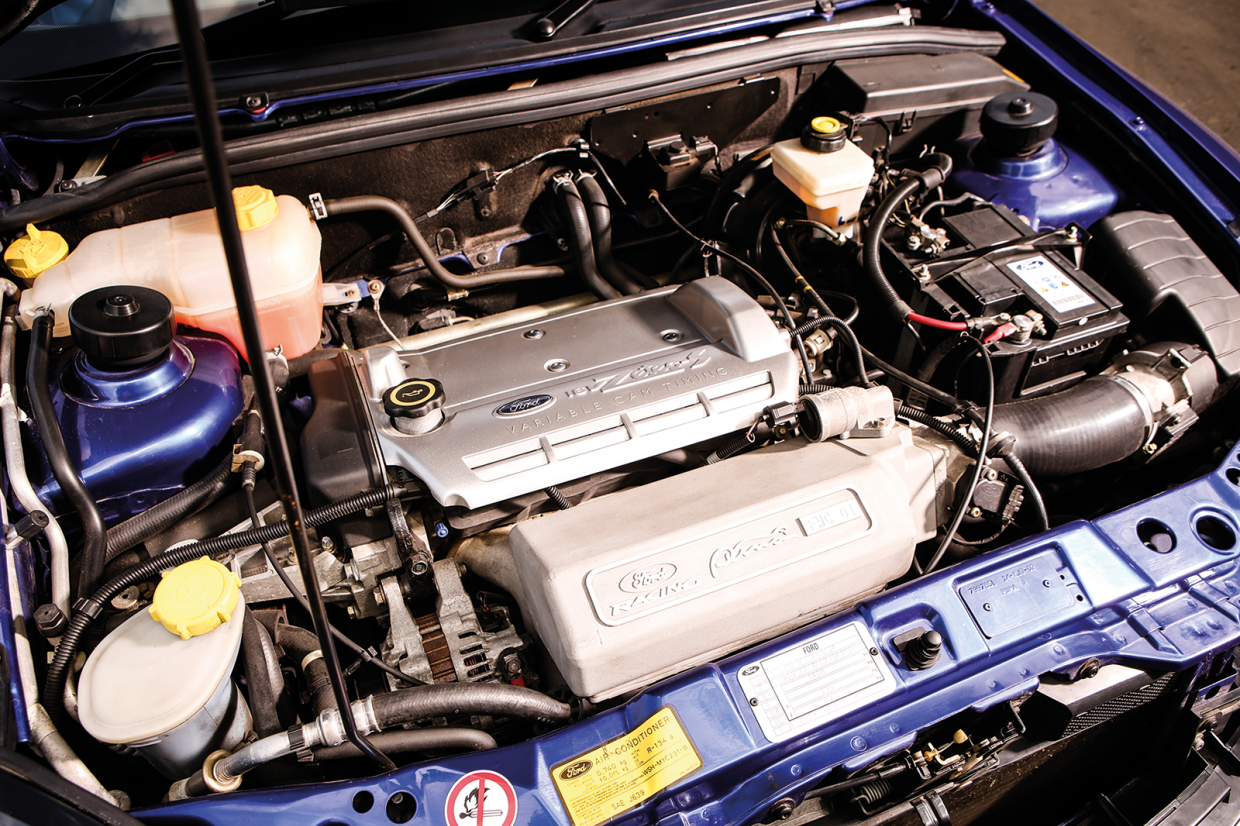 Resembling more of a glamour model than the standard car’s gymnast, it had a wider track with 17in alloys nestling beneath broader wings.

The front bumper assembly was revised, too – sporting a faux carbonfibre front splitter – and curing the Puma of its double chin (a result of the original stance being higher than intended).

A thousand Ford Racing Blue FRPs should have been converted by Tickford, but that was reduced to 500 UK cars.

Yes, it was stunning, but there was a problem with the figures. Despite the 1.7 featuring new cams, inlet manifold and exhaust, it packed only 153bhp at 7000rpm, which was short of the ST160 moniker’s promise. 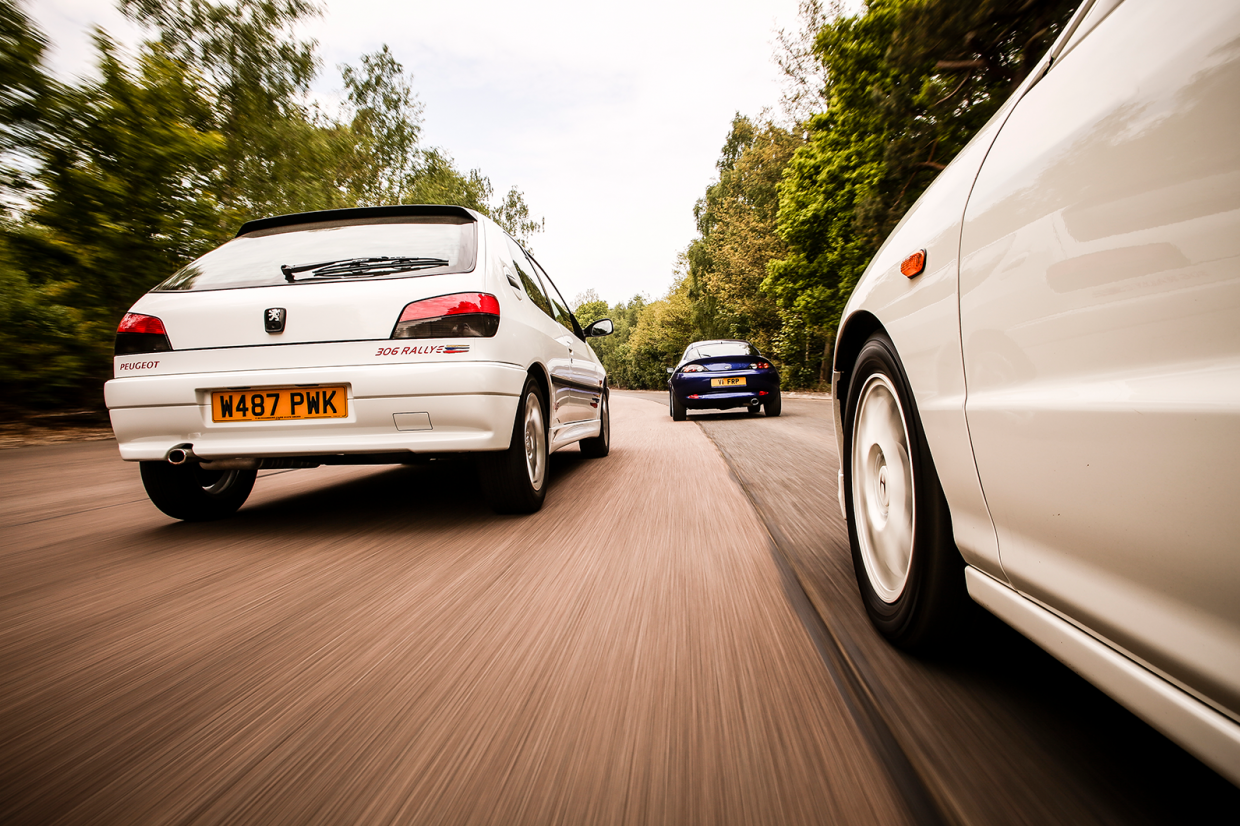 After a lap of Longcross, there is a tendency to feel like a wine-tasting novice whose only utterance is, “That’s nice, I like that one” to all three.

Clearly the tyres are going to get more flustered, but I must remember my promise to Honda and Ford not to brutalise their classics.

Respect must also be paid to Carl Chambers’ Rallye – the last one built – which was rescued from Ryton when the Peugeot plant closed.

It is utterly original, still exudes new-car parfum and, come home time, has just 308 miles on the clock.

Despite this, Chambers encourages redline sorties because that’s where true Rallye-ness awaits. 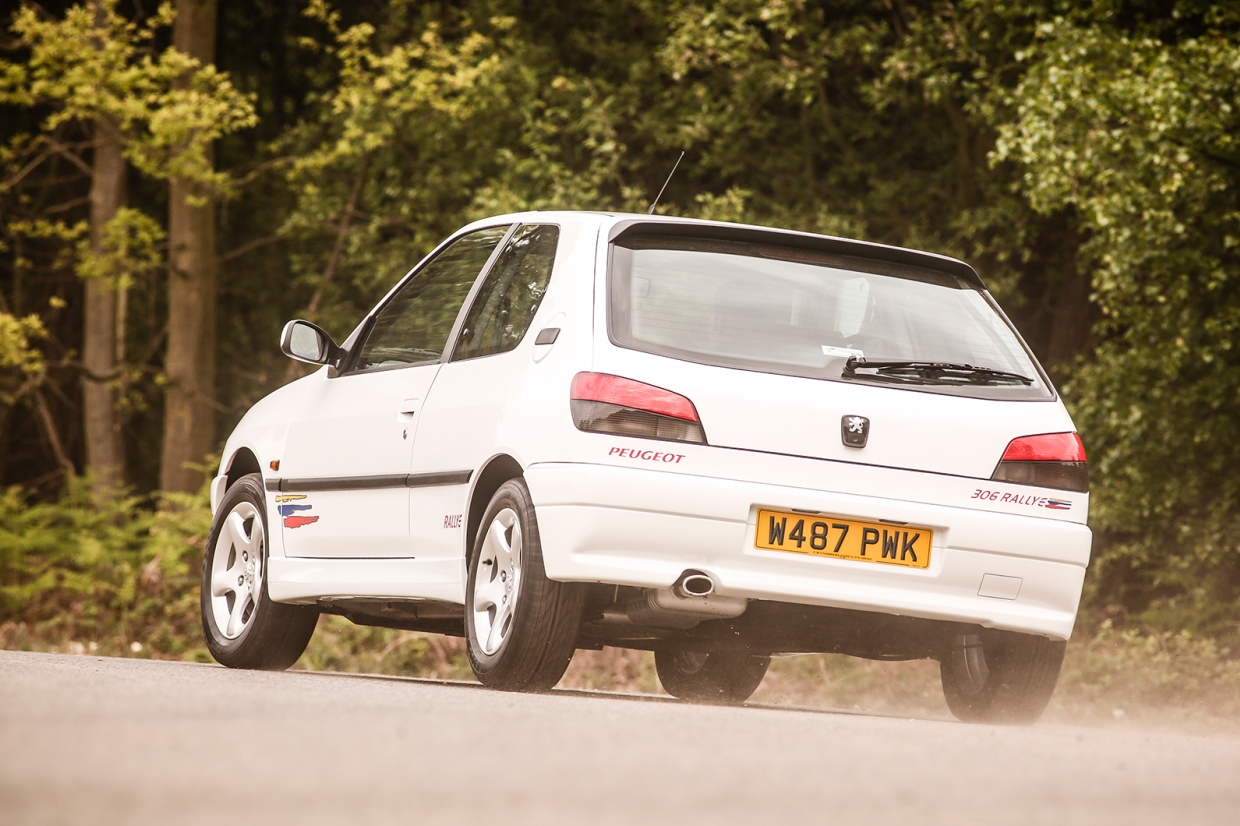 A mint example of the Peugeot 306 Rallye

At first, the Integra’s shiny dash resembles a giant piece of liquorice but then details come forth.

The cabin is absolutely driver-centric, the dashboard has carbonfibre-effect decals around the dials and vents – but not on the passenger side.

The control surfaces, too, are designed for tactility – the chunky leather-trimmed wheel, the plum-shaped titanium gearknob and a perfectly sited Recaro seat that cradles you like a baseball caught in a catcher’s glove.

The Rallye’s driving position comes close, thanks to an adjustable steering wheel, but the seats are the least supportive here.

The Racing Puma tries the hardest, but the seat is too high and the non-adjustable wheel too low – making the driving position more pleasure boat than track warrior. 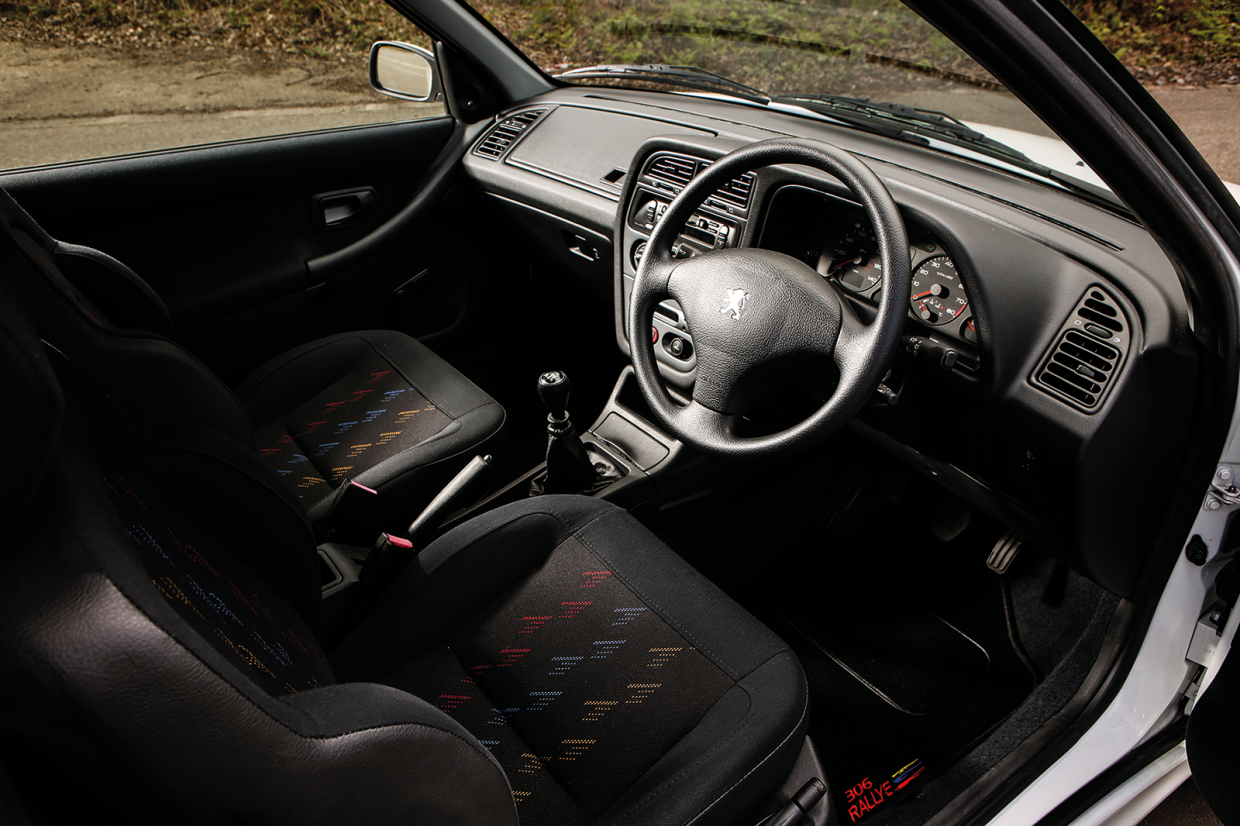 Its humble Puma origins – a sort of Audi TT-fied Fiesta – with alcantara Sparco buckets and detailing, do resemble an accident in a blue paint factory.

Ford, though, knows its customers and the cabin does stand out – even if it is in danger of over-egging the geezer pudding.

The 306’s six-speeder is a slick, fluid collection of short ratios, although today it is in overachieving company.

The Ford iB5 five-speeder is a masterful compromise of precision, weight and mechanical feel, but it just seems ordinary compared to the Honda – though this could be due to me driving one for over 140,000 miles.

When you palm the titanium, the Honda somehow feels nimbler, sharper and faster; to such a degree that when accelerating through the short gears, it becomes an unthinking action – a tic of the wrist.

One that is fuelled by an itch to have one more burst of that addictive VTEC. 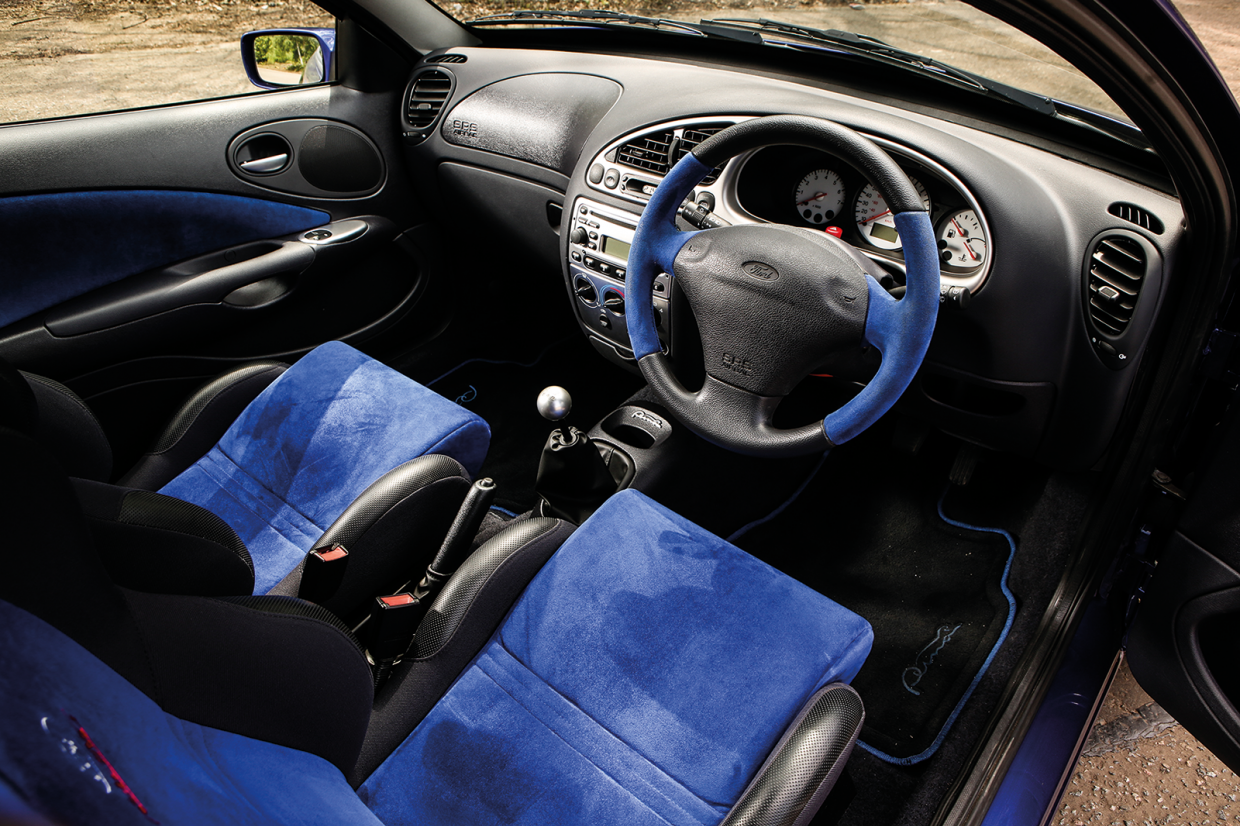 The 167bhp per ton Integra’s lack of mass and attention to torsional rigidity is omnipresent, from its lightweight windscreen to its strut-bracery.

The Integra is really the best compromise in terms of mechanical grip and handling adjustability – the FRP grips strongest due to the bite from its 215/40R17 tyres, but it’s the least playful.

The Rallye, with 141bhp per ton, leans the most, but matches the Integra’s 195/55R15 rubber and adhesion, although it’s prone to tail-wagging exhibitionism.

It is capable of fine balance although it does demand more care on the throttle than either of the bucket-seated brethren.

It is such a hoot, but this is tempered by a 911-ish trepidation of mid-corner braking. Unless you’re able to thump the throttle and let talent, physics and fate come to the rescue before the trees intervene. 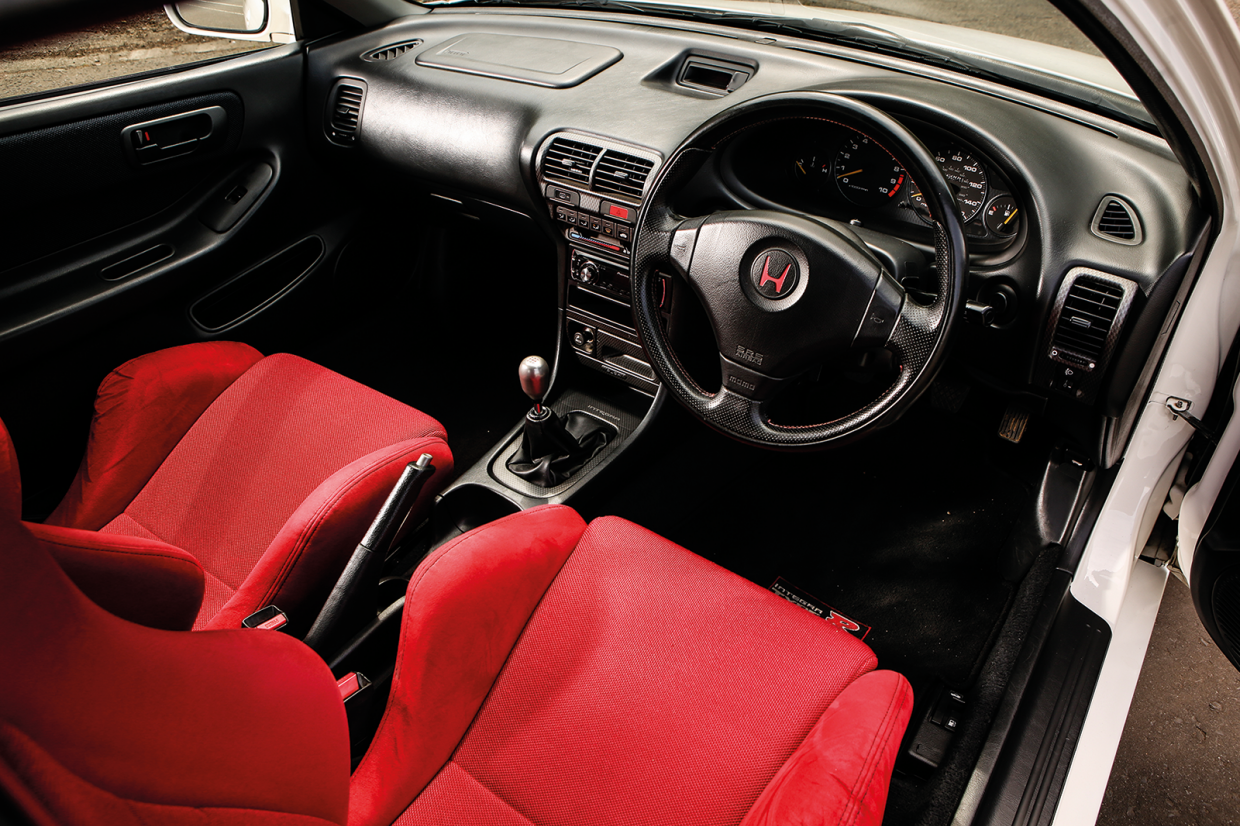 Excitable, capable and sonorous, the Rallye’s 167bhp four-pot is just getting into its stride at that speed. Up through the ratios – growling, howling and hollering all the way up past 6500rpm – mechanical sympathy curtails play before the 7000rpm redline. It’s cracking fun.

The 306’s steering is not as quick as the Integra’s, but it is perhaps lighter, more polished and less textured.

The pay-off for the body roll is that the Rallye has the best ride here. If only the seat wasn’t so disinterested in lateral location.

It is also the most practical of the three and, thanks to its subtle appearance, I expect that it doesn’t invite the bottom-sniffing aggression of other road-users – something that the Honda’s pramhandle rear spoiler provokes. 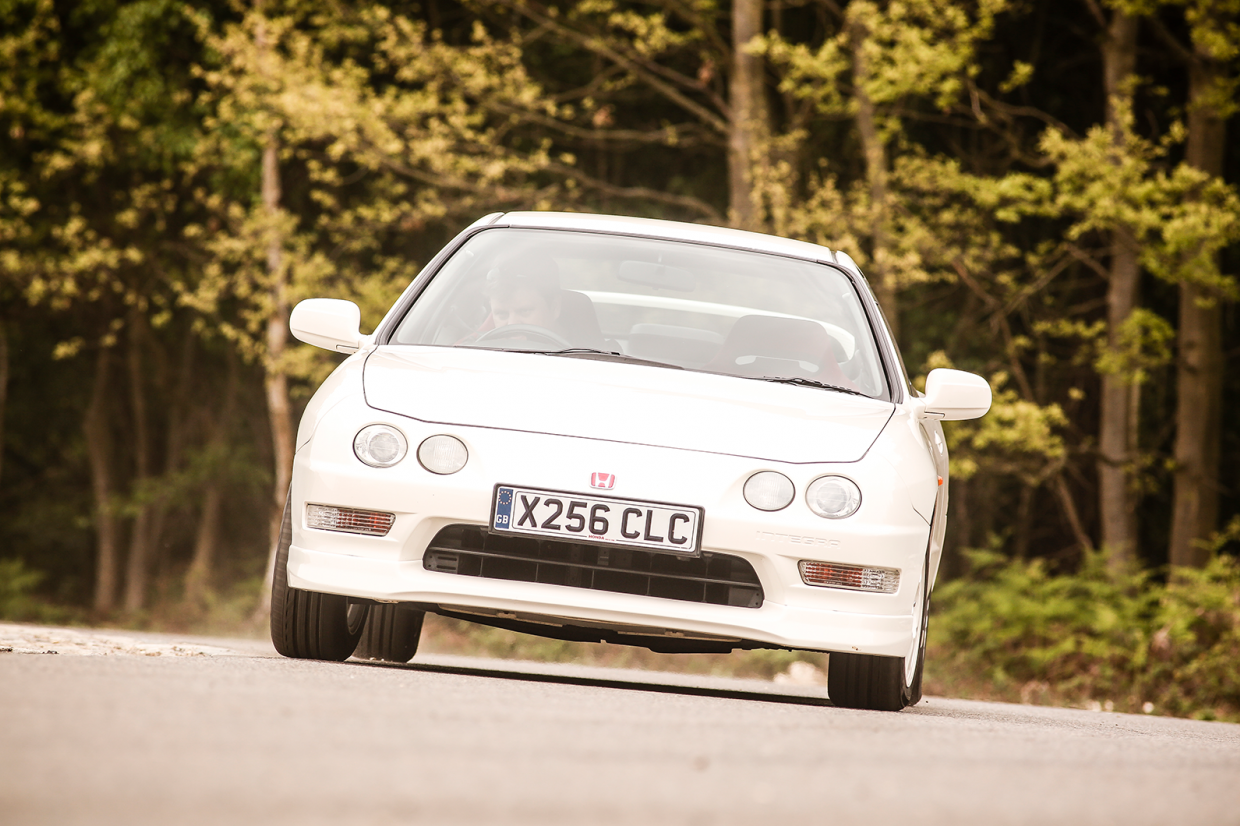 The Honda punches far higher than its cylinder count suggests. Its note is urgent and savage; the higher the revs, the greater the stridency.

At 3-4000rpm, the Integra sounds like a mild-mannered bean counter, but above and beyond the 6000rpm step – where cam profiles change – it turns into a posturing rock god.

It gets louder and more intense with peak torque, just 131lb ft, being achieved at a giddy 7300rpm.

It realises 187bhp at 8000rpm, 500rpm shy of the 10,000rpm tacho’s redline. The B18C6 engine sounds so possessed, frenzied and crazed, you wonder how the block can contain such fury.

Both drive and steering are unaffected, remarkably, the front-end remaining undisturbed by the limited-slip diff, not darting hither and thither like a bloodhound’s nose.

Knuckles do not become bleached, palms stay dry and eyeballs remain in their sockets. 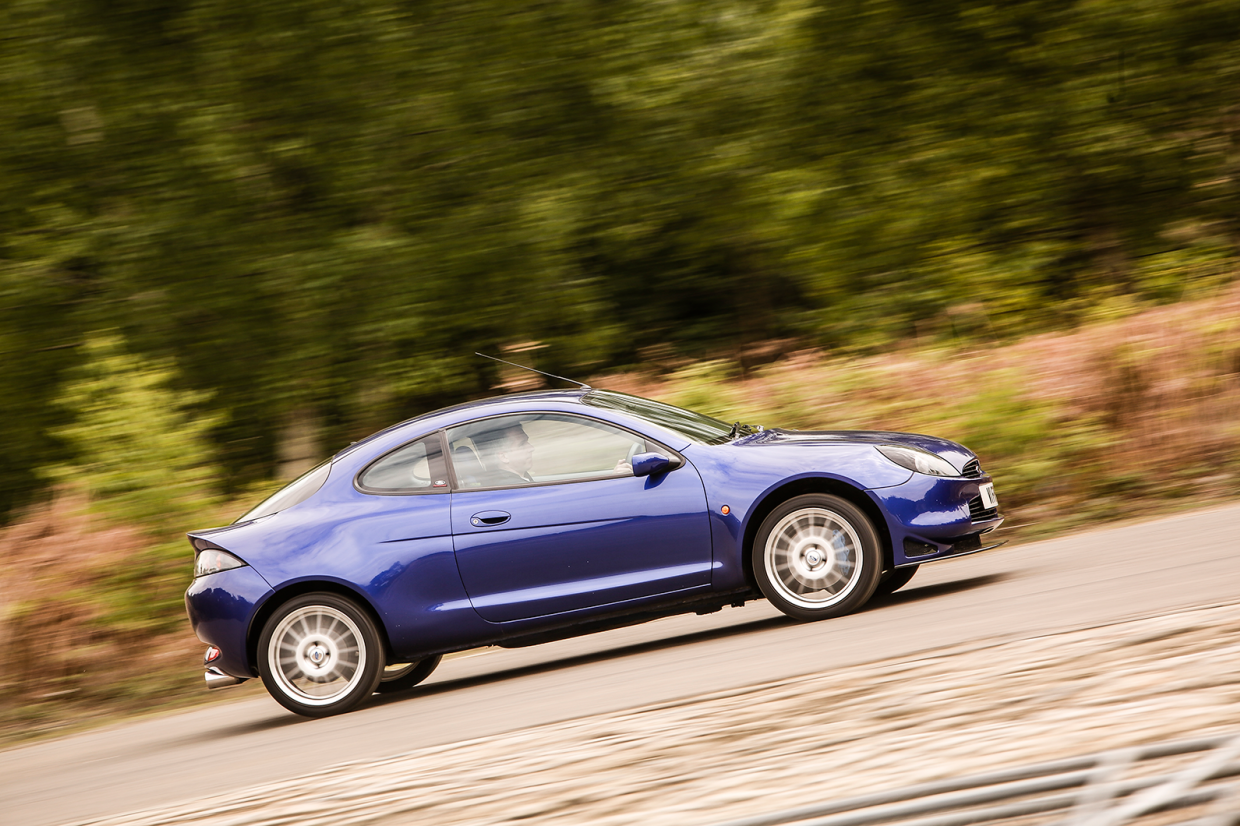 Compared to a previous experience with a Racing Puma – not V1 FRP – on heavily cambered roads, the Integra remains beautifully behaved.

Above 4500rpm and the FPR starts to sing crisply, going on to peak oomph at 7000rpm, where the tacho ends.

Its steering is quicker than the Rallye’s, roadholding more plentiful, lean better controlled.

Its steering is beautifully harmonised with the keen front end, it’s incredibly forthcoming and well judged – although it does lose some of the standard Puma’s amiability thanks to its Charlie Chaplin boots. 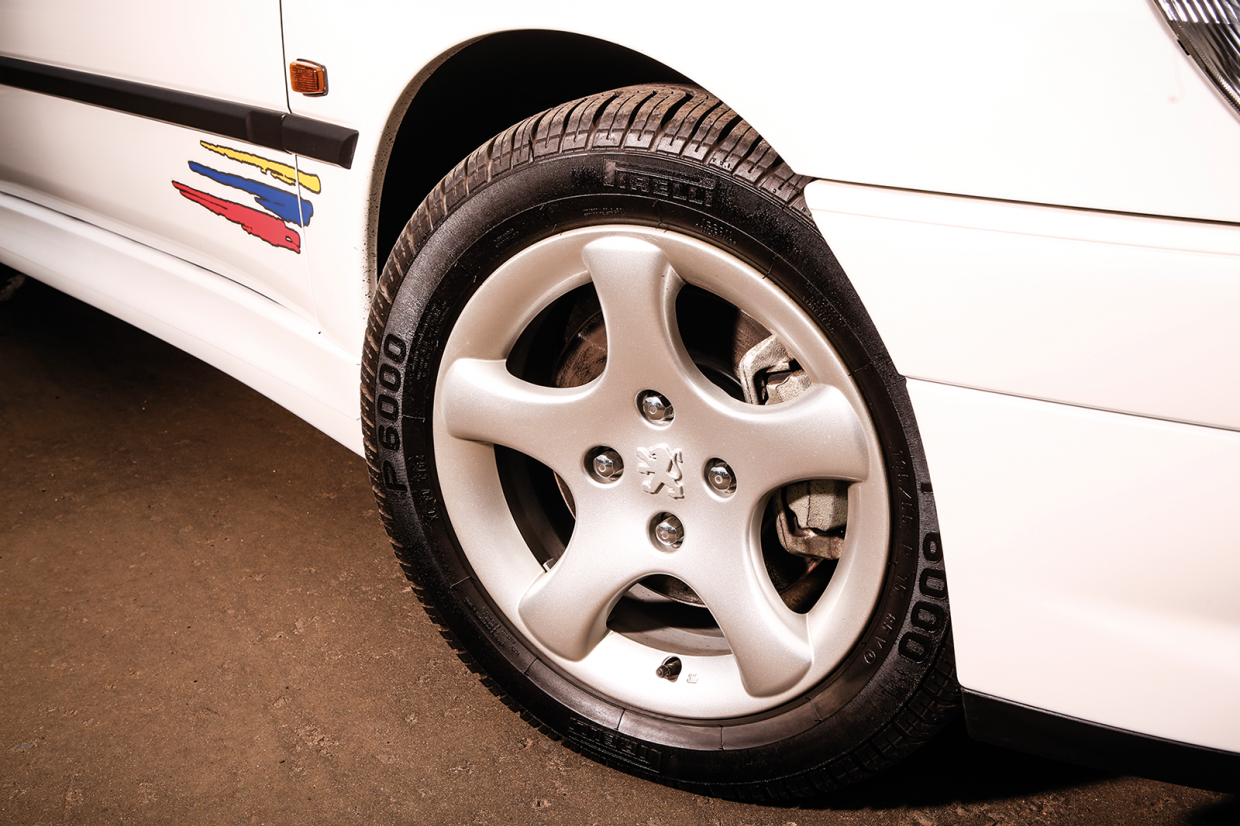 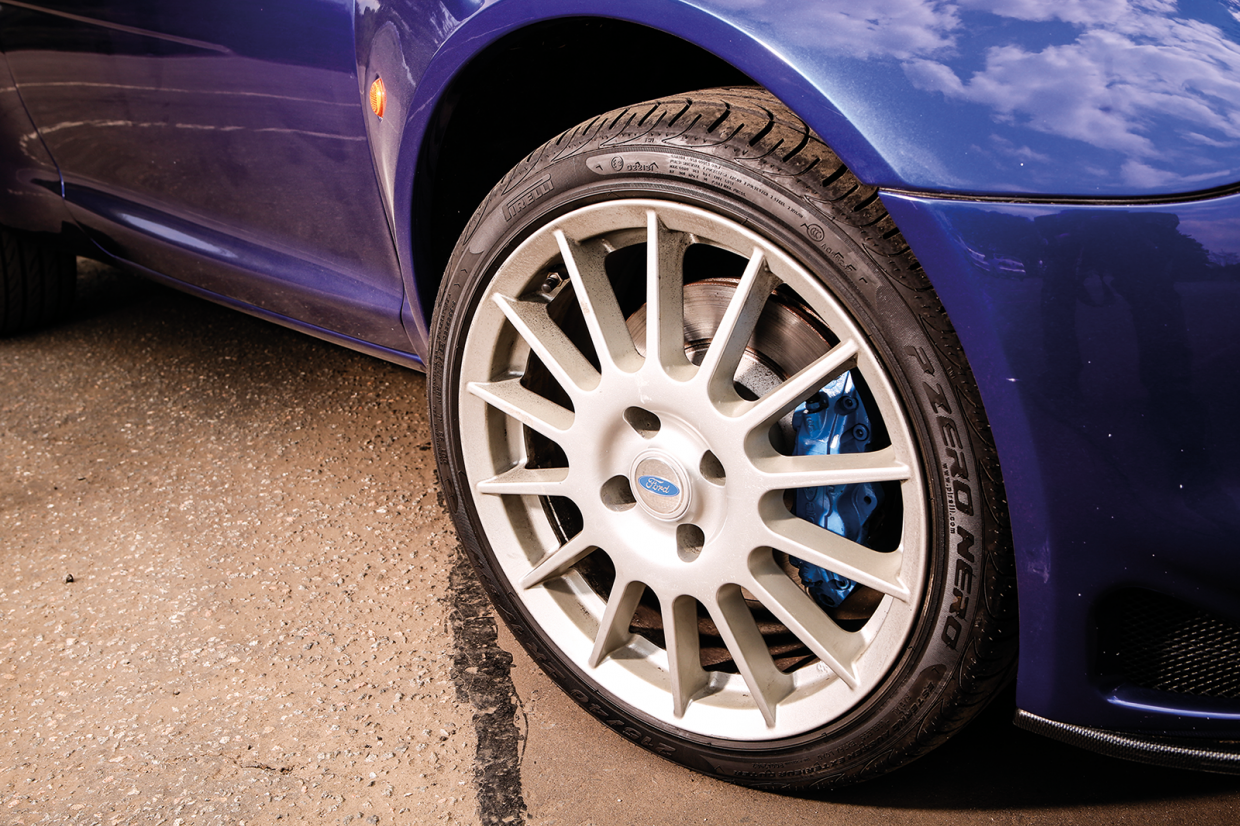 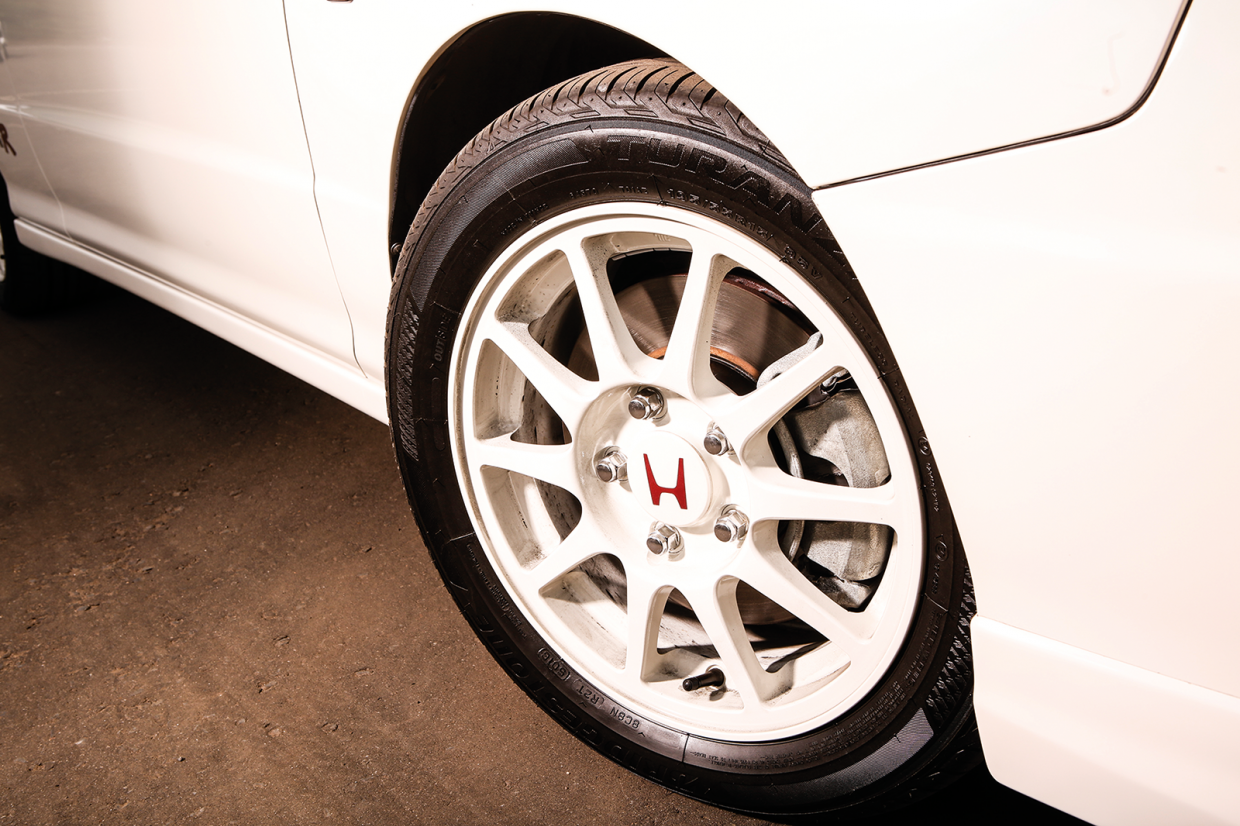 Evocative rims for all three

The Ford still beguiles – it looks the part and, with a laddish fifth injector in the exhaust, it excitedly pops and chuckles on the over-run.

The Zetec SE – designed with Yamaha – revs eagerly, its fizzing waspish note has less basso profondo, torque and horsepower than either the Honda or the Peugeot.

What this 132bhp per ton Puma lacks in straight-line speed, it compensates for with greater mechanical grip.

Hurtle through the switchback cornering demands of the Snake handling course and the terrier-like Ford easily shadows the more powerful pair. 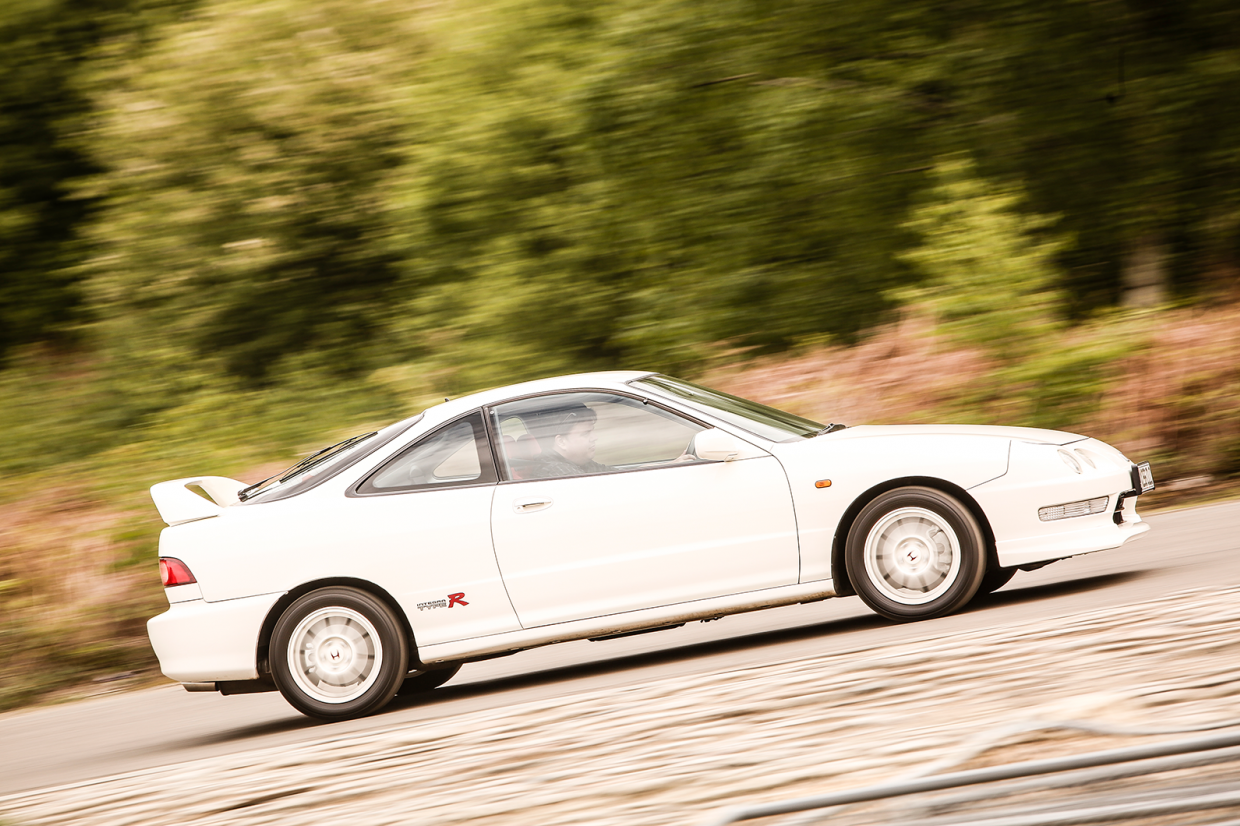 Our author sides with the Integra

Off track, we chat about the contenders. Chambers’ dad, detecting my fondness for the origami projectile, suggests that I’m “a Honda bloke”.

I deny it, but on reflection he’s right – although I’m probably closer to a Type R fundamentalist. Keep it lean, keep it simple and turbochargers, keep away. Yet this mantra applies to all of these classic motor minimalists.

Each makes me grin, yet for me it has to be the Integra.

It’s easy to be captivated by the underbonnet hullabaloo, but Honda would go further and higher, culminating in the stratospheric S2000. 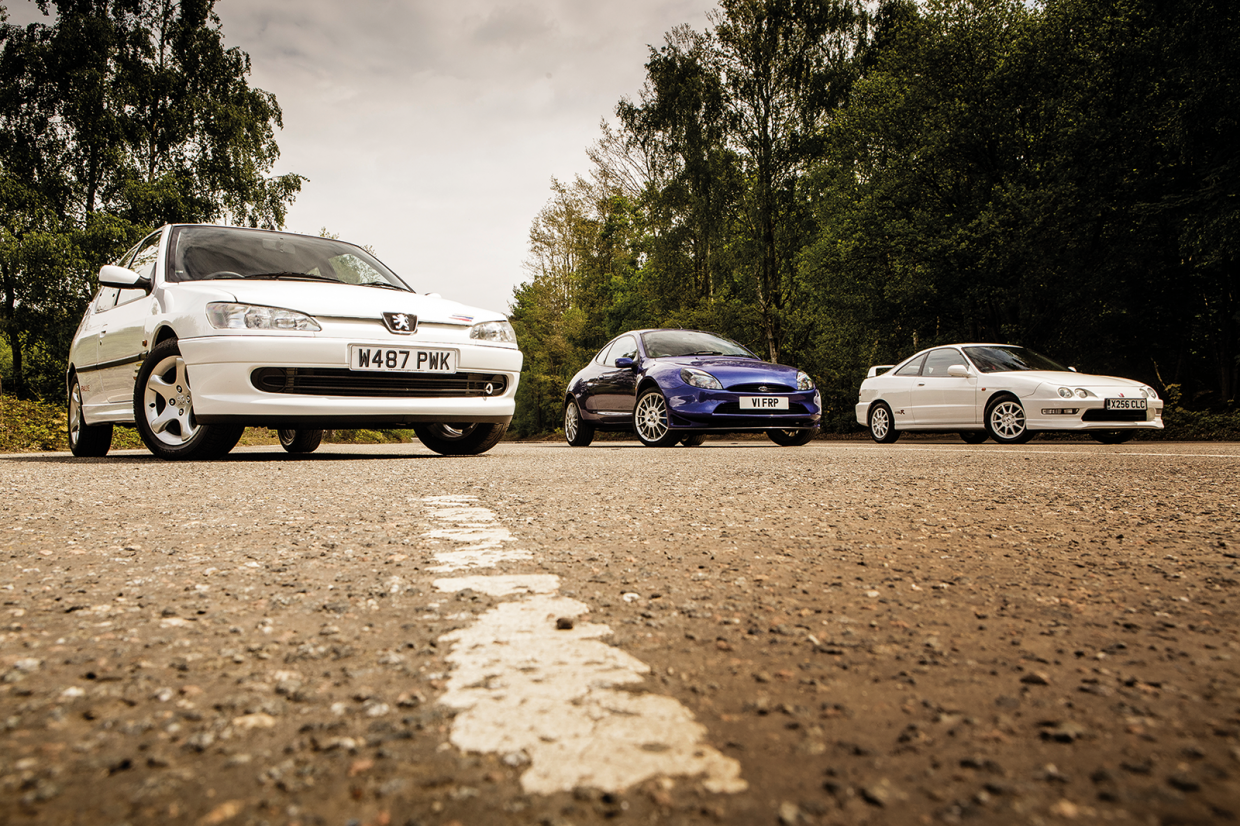 What it wouldn’t beat, though, was its chassis’ blend of perfectly resolved steering, front-end alacrity, grip and faultless handling.

Actually, that isn’t fair – it isn’t just Honda that has not been able to surpass that combination, no manufacturer has.

Like the Mini and the Alfasud, Honda built itself a problem – a monumental machine that continues to cast a shadow over all that followed it.

This was originally published in our August 2017 magazine 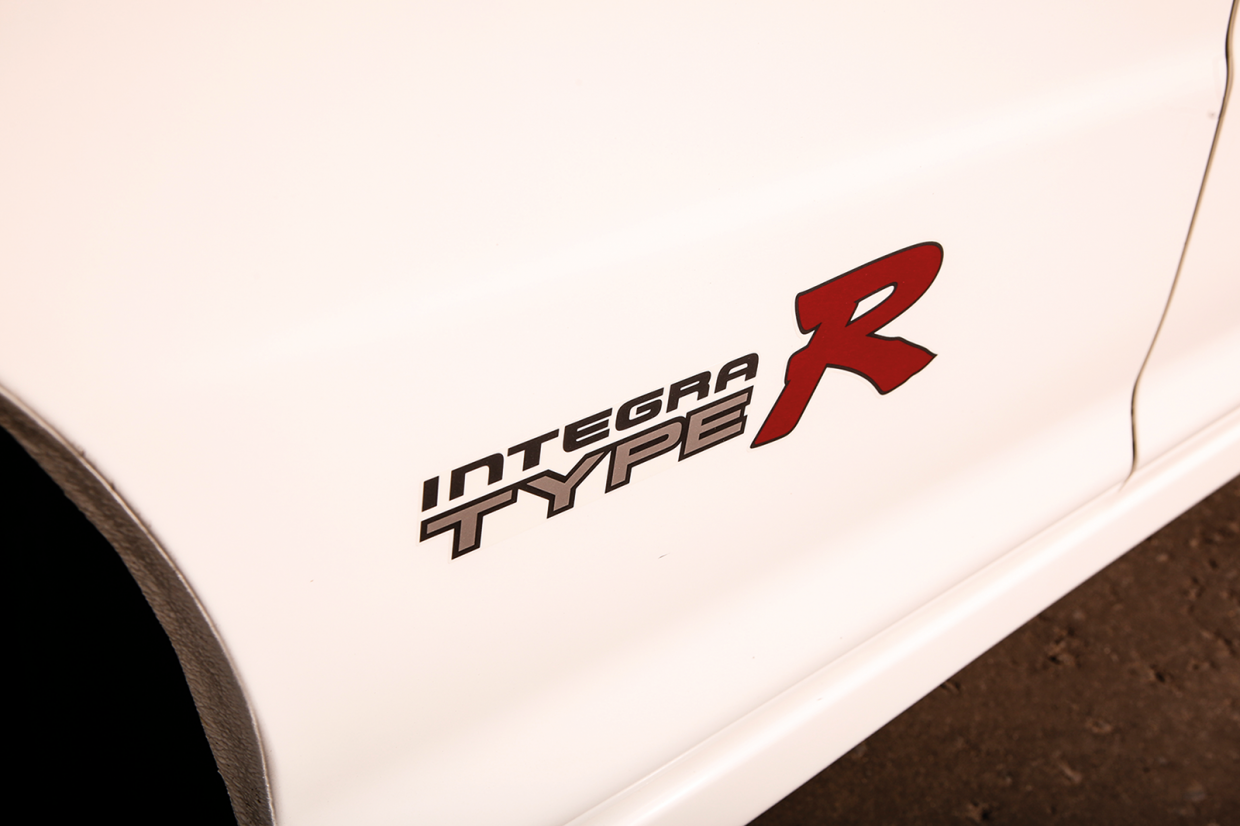 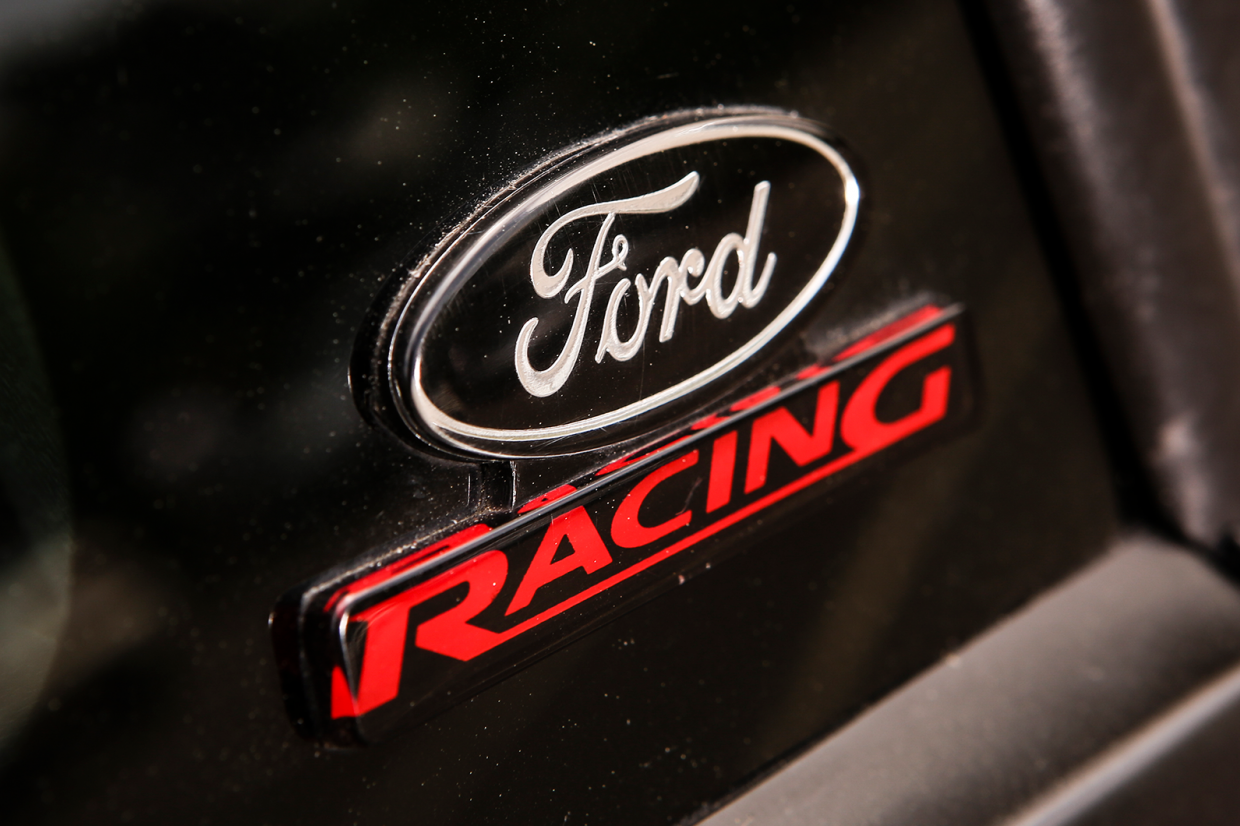 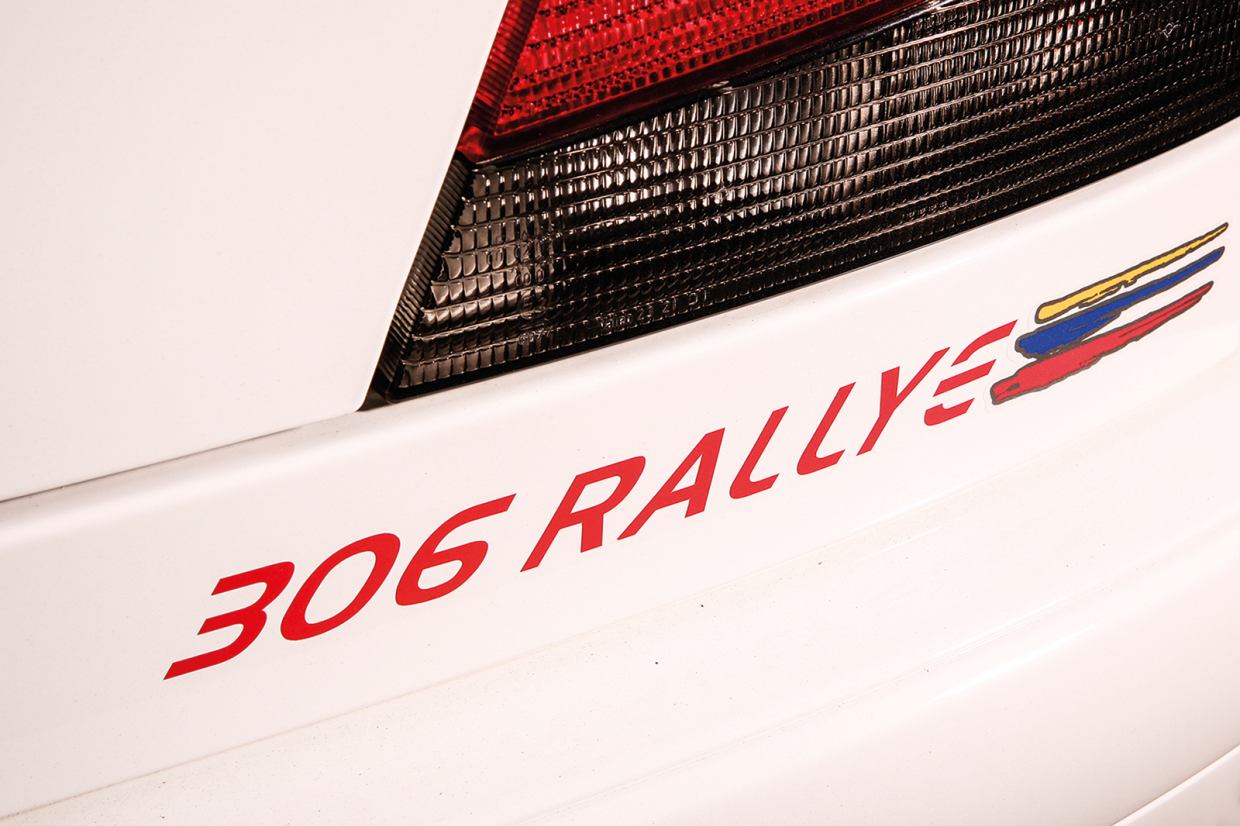