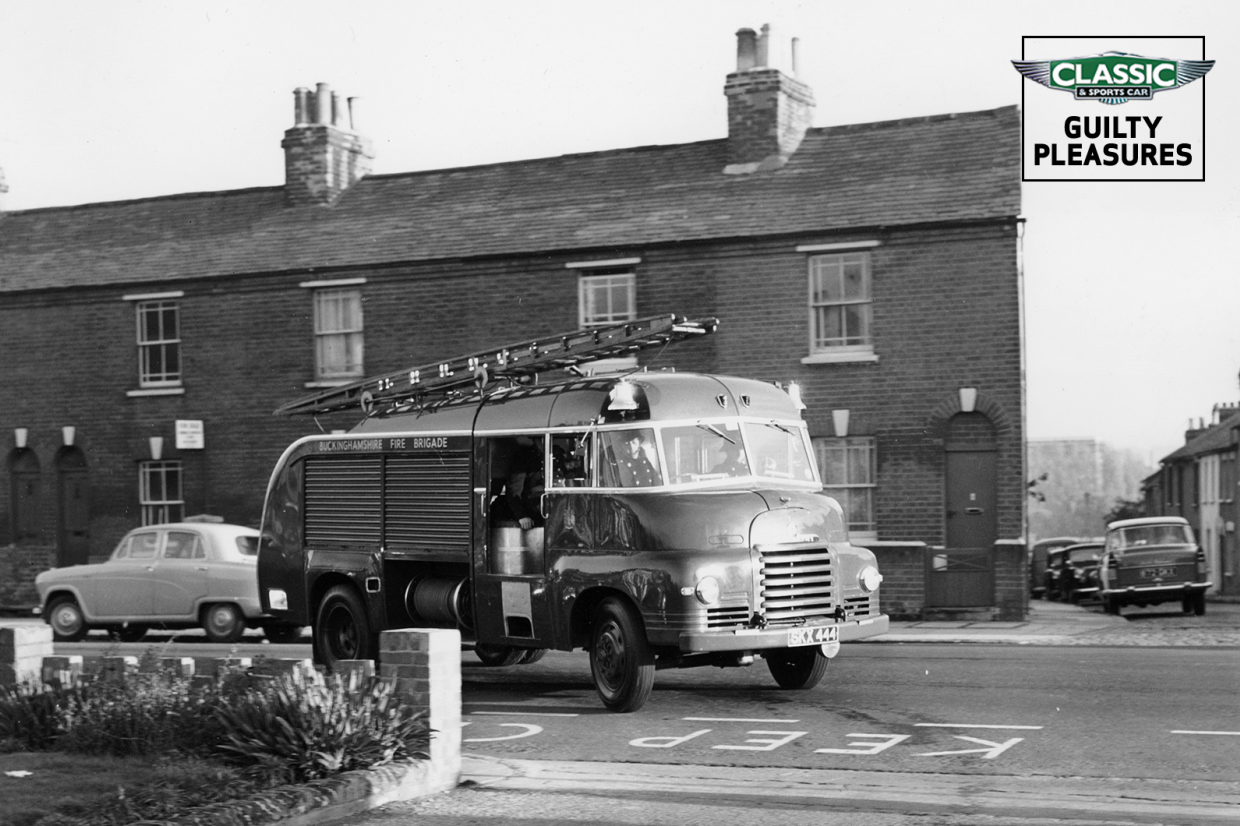 Unless your house was burning down during the last firemen’s strike and you were waiting for one to meander its way to the smouldering embers, then I think it is hard to look at a Green Goddess fire engine without feeling an affectionate glow.

Based on the Bedford RL, the military version of the civilian S-type Bedford, just fewer than 1000 were built, their official title being the RLHZ Self Propelled Pump.

Rounded, cuddly and, to me, rather handsome, they have passed into folk memory as the time-warp old-stagers from a distant universe called the 1950s, that come to the nation’s rescue in times of crisis.

These might be unconventional classics, but I reckon they’re fully deserving of ‘guilty pleasure’ status. 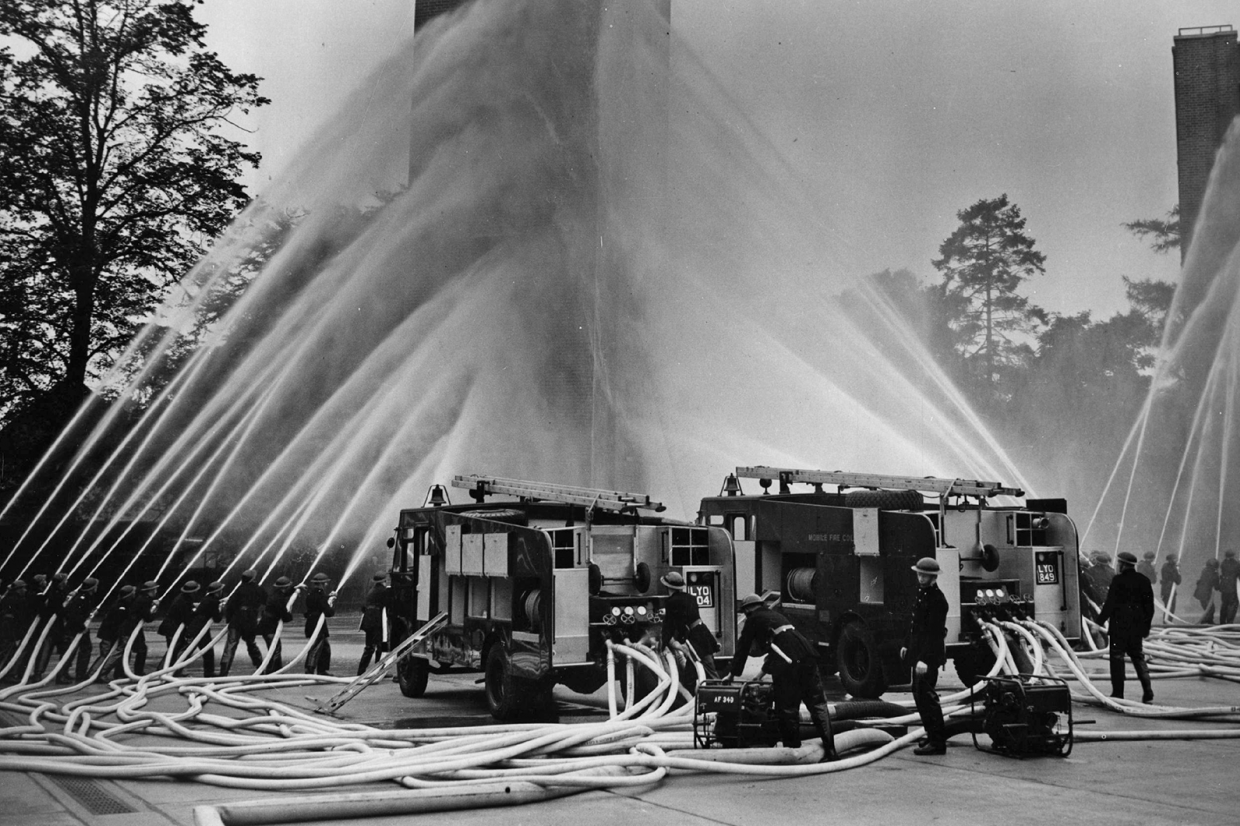 On 5 October 1955 a demonstration of the fire engines’ jets was staged for then Home Secretary, Major Lloyd-George

The Green Goddess will always be associated with the winter of discontent during 1977-’78 (when they still had bells rather than two-tone sirens) and, to a lesser extent, the miners’ strike (1984-’85).

But after their last major outing in 2002, the decision was taken that the by-then-50-year-old, Bedford-based fire engines, the last of the long-term-storage government vehicles, should be disposed of.

Back in 2006, I went to see a company called Witham Specialist Vehicles near Grantham in Lincolnshire, who dealt with the sales and marketing for all MOD vehicles.

Depending on mileage (fewer than 1000 miles in some cases), the Goddesses were selling well at the time, and to all kinds of people – even a Ferrari dealer in one case. 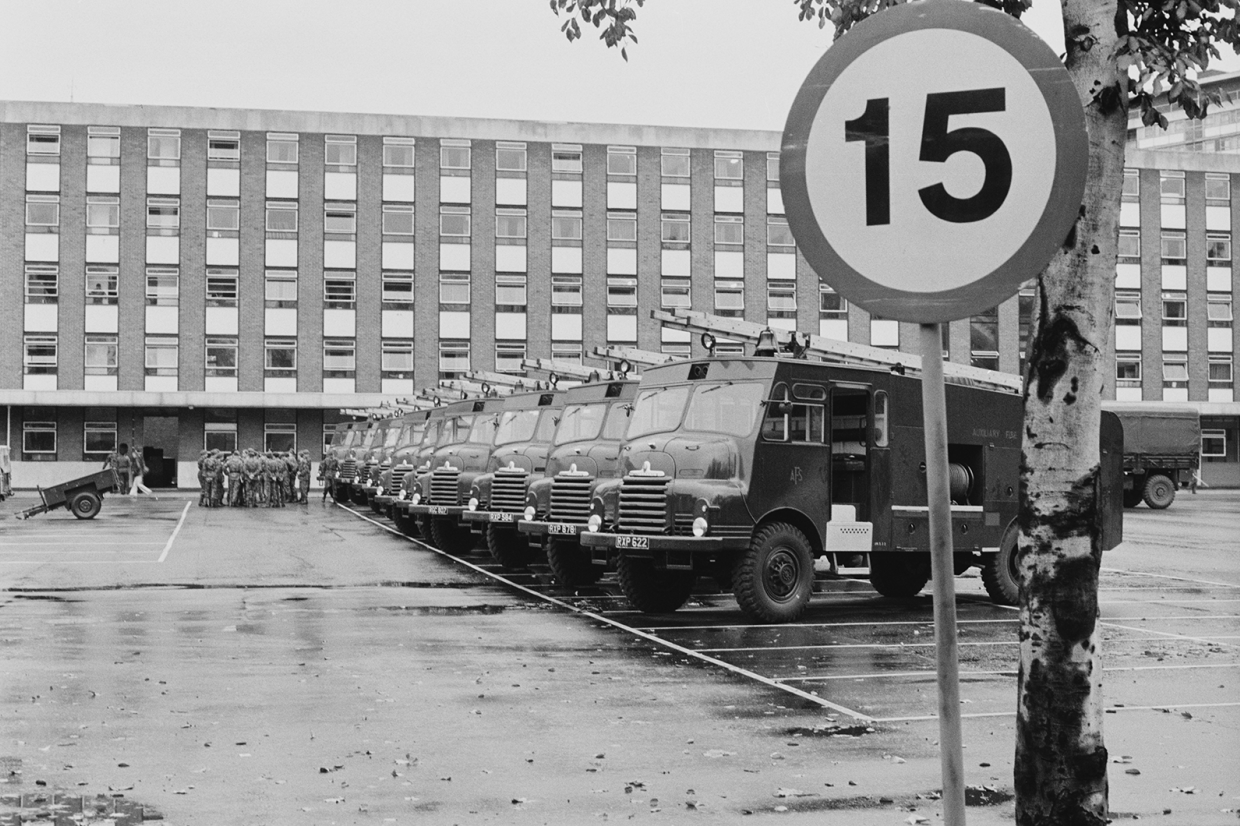 Firemen gather to strike on 14 November 1977, alongside their fleet of Green Goddess fire engines

For as little as £3700 you got a 5-litre petrol straight-six, four-wheel-drive capability and ample room for six.

Modern fire engines are stripped of their equipment when sold to the public, but these classic workhorses came with side lockers that were still fully kitted out with sledgehammers, bolt cutters, buckets, stirrup pump, bamboo rods for chimney fires, hemp rope, first-aid kits and, of course, short and long ladders on the roof.

Good for 60mph and 10mpg, the Bedford Green Goddesses were in uniformly excellent condition, having been kept in heated sheds and looked after by the emergency fire service with no expense spared, placed on blocks with all fluids drained and even the insides of their 100-gallon fuel tanks coated with oil. 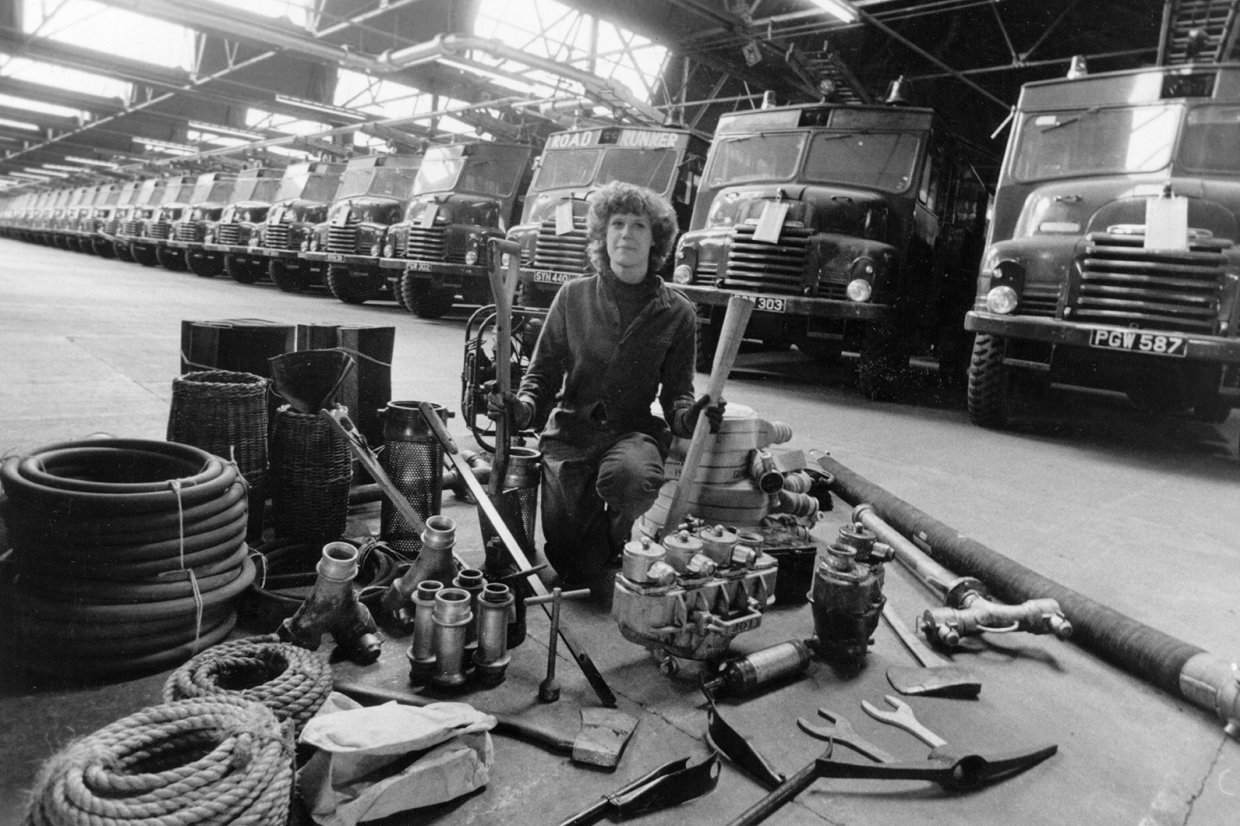 On 19 October 1978, a 19-year-old Linda Gould was photographed working on Green Goddesses at the Home Office Supplies and Transport Depot

Although Green Goddesses are most strongly associated with ’70s strife, these were actually born out of Britain’s ’50s nuclear paranoia.

They were part of a fleet procured in 1955 and 1956 for the Auxiliary Fire Service, the idea being that in the event of nuclear war, the AFS would protect the civilian population against fire.

More importantly, they were also set-up to be used as part of a state-of-the-art relay-pumping system that could move fresh water anywhere in the UK.

In other words, if a nuclear attack polluted the reservoirs, these Bedfords could come to the rescue and pump fresh water from Manchester to London using thousands of miles of hose, or pump water from Edinburgh to London in relays.

They came as standard with a 900-gallon-per-minute Sigmund pump, plus a Coventry Climax lightweight pump. In second gear – and the transfer box in neutral – you could drive other machinery off the transfer box. 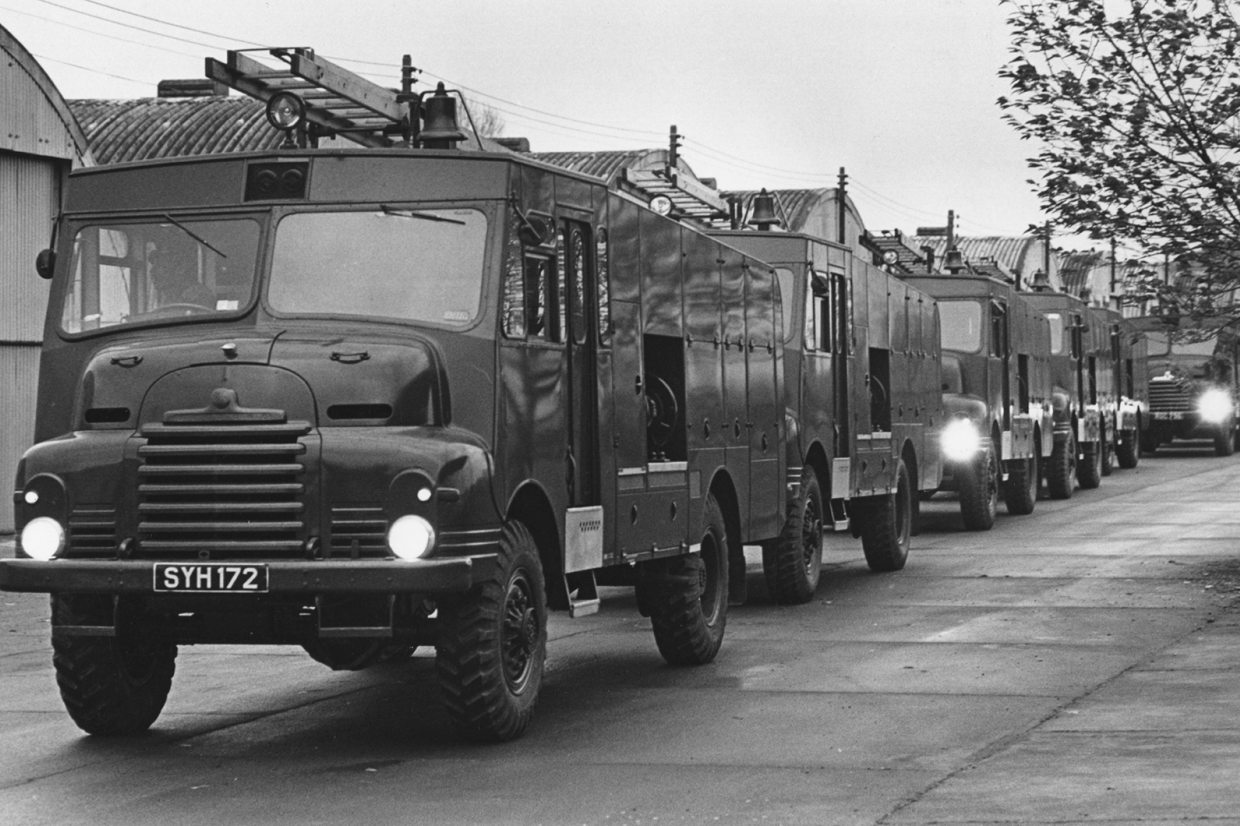 When the firemen went on strike, the army stepped in with a fleet of Green Goddess fire engines – here on 10 November 1977

I got to drive one around an unused airfield for as long as I wanted. Inside, I remember the roomy, cream and brown cab smelling of whatever it was school halls and hospitals smelled of in the ’70s.

The front bucket seat, which went up and down as well as backwards and forwards, still wore its plastic protective covering.

As well as basic instruments, there were switches for a two-tone siren, roof beacon, and reversing lamp and foglight. There was a search light, too, individual windscreen-wiper motors, switches for the locker lights, and levers between the seats to engage four-wheel drive and the water pump.

The enormous wheel didn’t do much to hide the weight of the steering, but the four-speed gearbox was simple to operate and with no water on board the Green Goddess was easy enough to drive, with a lusty-sounding 110bhp engine. Fully loaded, I understand they wanted to go straight on – and had rubbish brakes.

In service, apparently they were run with the engine covers off for extra heat in the winter, the exhaust manifold used for warming up Cornish pasties.

I think these utilitarian classics are great fun and terrific value for money.

Beautifully coachbuilt using aluminium over an ash frame, I was almost tempted. What’s more, you can drive a Green Goddess on an ordinary driving licence and they don’t need an MoT or road tax.