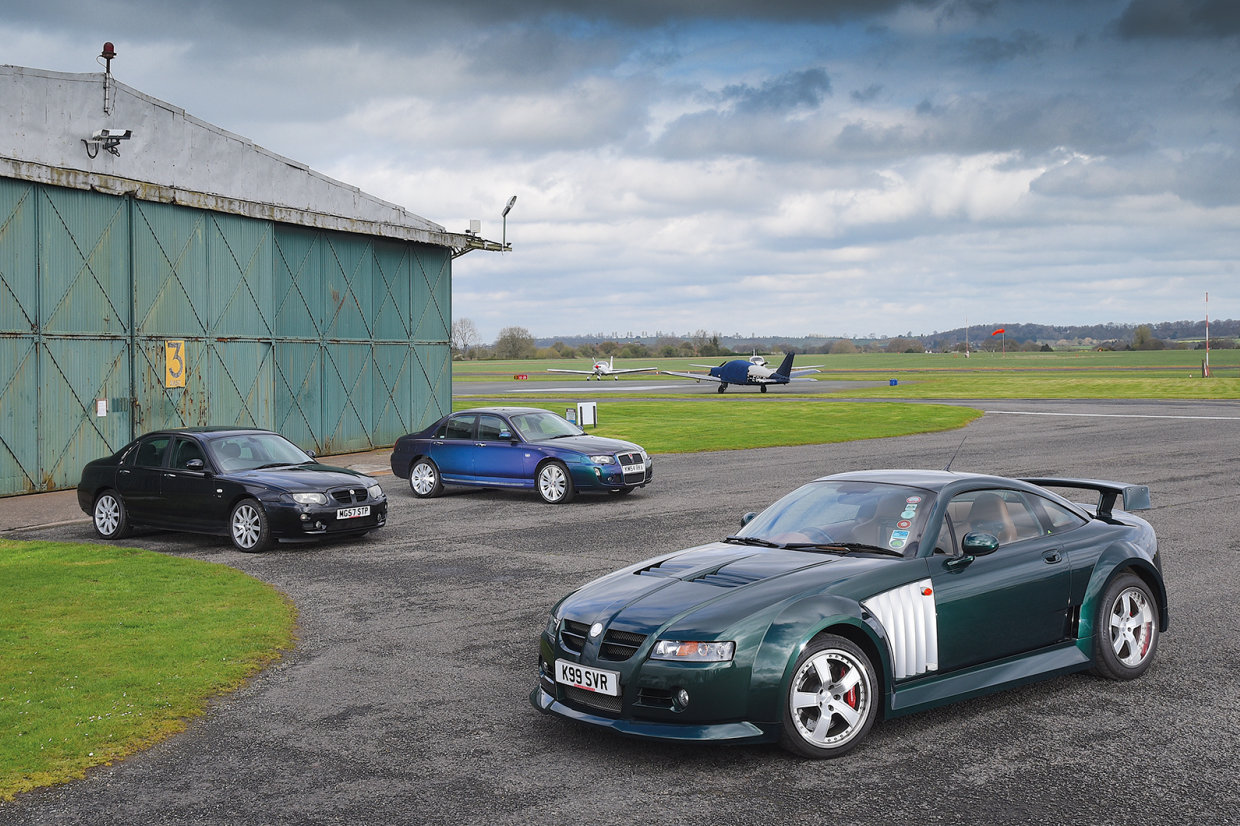 There were some damn fine engineers at MG Rover, many of whom are still working in the UK’s car industry.

Most were rabid car enthusiasts who would fix noise, vibration and handling issues during the week and try for best time of the day at Shelsley Walsh at the weekend.

My romanticised theory is that when the writing was on the P45s for MG Rover, these petrolheads decided to have one final blowout – the result of which was a hangover and a bunch of big-engined saloons.

A conceived-in-the-pub Anglo-American dalliance between Longbridge and Dearborn: a Mustang V8 fitted into a front-wheel-drive saloon. It was madness; it was fun. 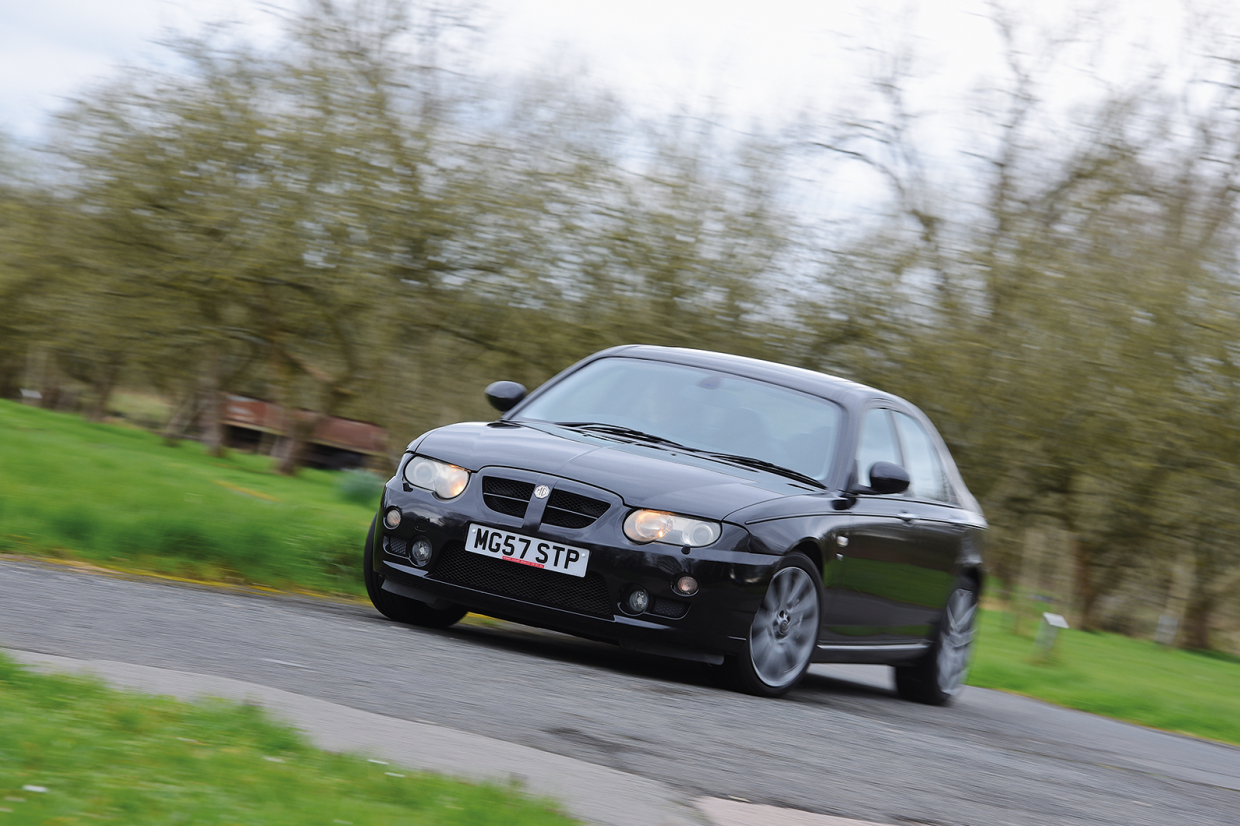 ZT had a smaller grille than sister 75

In truth, the plan was rather more structured and thought out; a strategy created by the Phoenix Venture Holdings executive team to use the MG brand ‘to create a stairway to heaven’.

They already had a range of Rover cars; the MG name was to create excitement and, more to the point, attract a buyer or investor to the company.

But I’m right about a few things. The engineers and designers were hugely talented and enthusiastic and, above all, able to work very quickly with very limited resources.

The result of the quickfire programme was the Mustang-engined Rover 75 V8 and MG ZT and, in an even more ambitious and convoluted project, the XPower SV.

Conceived as a De Tomaso, it gestated into the Qvale Mangusta and then came to fruition via the project name X80. 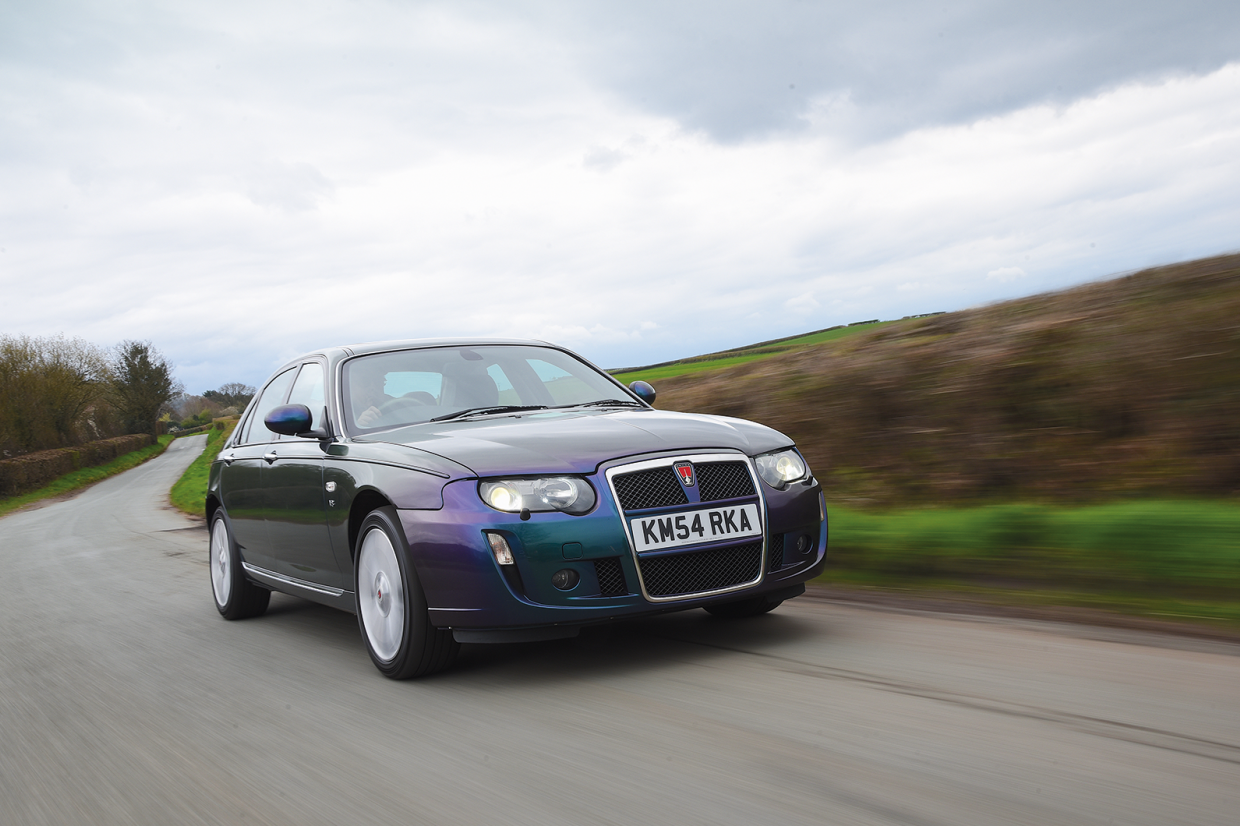 Poseidon Blue Monogram paint was an expensive extra on the 75

We have brought the three together outside Summit Garage, a modern MG dealership in Dudley owned and run by brothers John and Nick Newey.

“Our grandfather started the business in 1945,” explains John. “He bought the garage for £750 and then discovered that there were 500 gallons of petrol in tanks that he then sold on the black market for £500.”

Apart from a short break in the 2000s, Summit Garage has always been an MG dealer. Nick, who runs the parts and servicing departments, is not a car enthusiast but John most certainly is.

At home he has a mint MG RV8, and outside today is his immaculate British Racing Green SV-R. The showroom houses a 400bhp supercharged ZT saloon and black ZT 260 saloon.

Lloyd Grainger, our Rover 75 owner, is also a lifelong Rover and MG enthusiast with a V6 ZT-T (the estate version of the MG-ised Rover 75) and a MG ZT 260.

“My knees aren’t so good,” explains Grainger. “My left knee swells up after I’ve been operating the 260’s heavy clutch for any length of time.”

His solution was to buy a 75 V8: “They all have automatic gearboxes, whereas the MG 260s are all manuals.” Grainger’s 75 is Poseidon Blue, one of the special and expensive Monogram colours, and was built the same year as Newey’s black ZT 260. 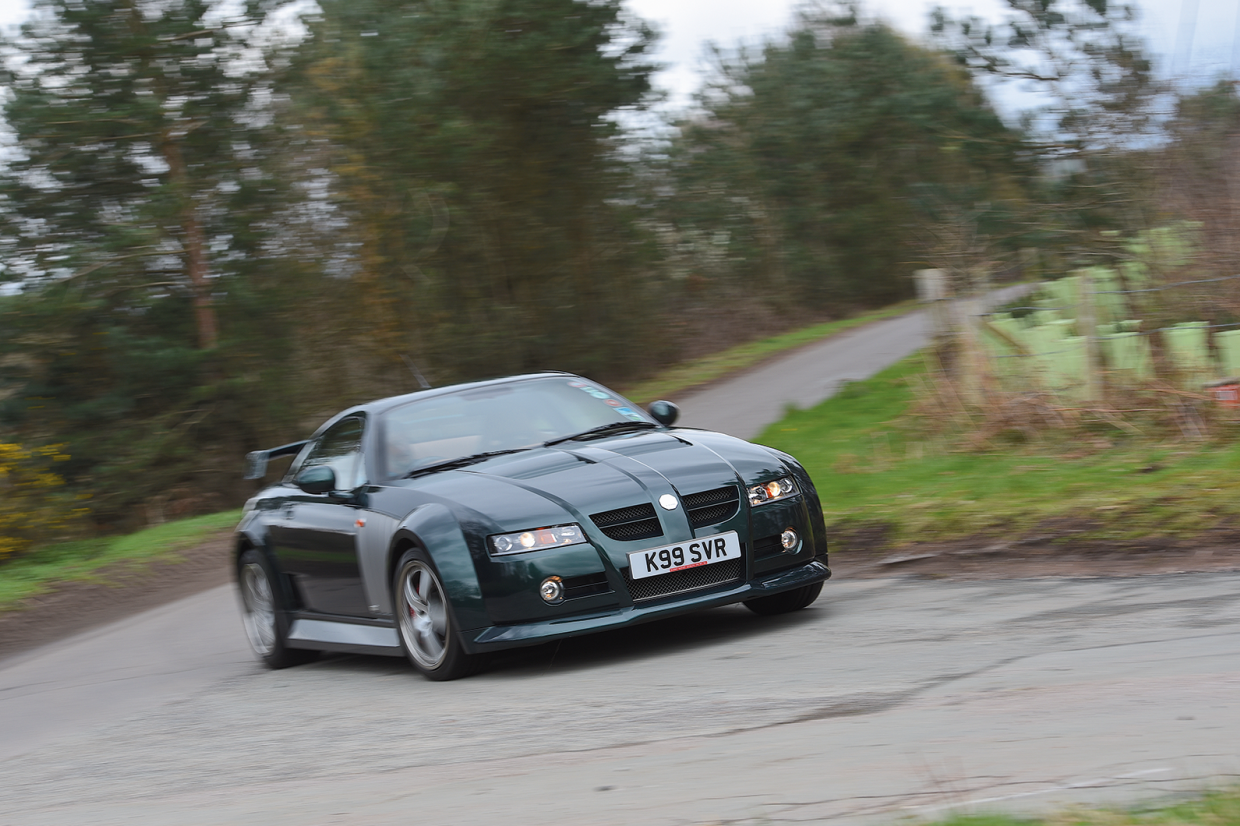 Prone to understeer, the SV-R feels stable today – and this one was once owned by Rowan Atkinson

At the time I rather hoped that the administrators had forgotten about our car, but unfortunately they wanted it back.

Even in 2003, when 260bhp still sounded quite impressive, the ZT 260 wasn’t a particularly fast car. It doesn’t feel so today, but it is striking how relaxing it is to drive.

It’s a testament to the thorough job done by Prodrive, which developed the car, and to the team at MG Rover, which put it into production, that this 15-year-old 65,000-miler feels so tight.

From the inside, apart from the soft burble, the only giveaway that you’re driving an MG ZT 260 and not a Rover 75 is the subtle V8 badge on the dashboard where a cold/warm air switch originally sat (and still does in Grainger’s 75 V8).

And that the orange low-fuel warning light is often glowing, as it starts to do very soon after leaving. Both Newey and Grainger claim to have seen mpgs in the mid-to-high 20s on runs in their 260s, but also confess to a dismal 14-16mpg when driving around town. 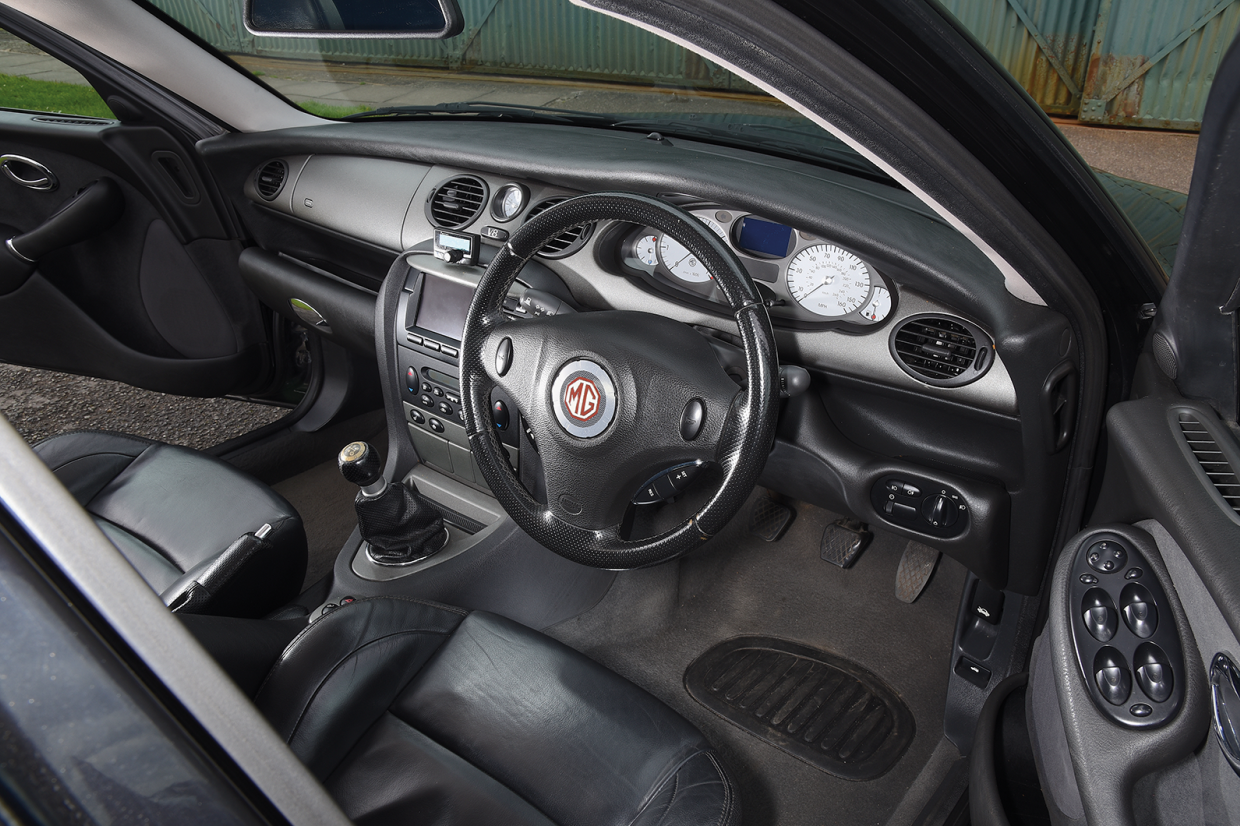 On the inside, little distinguished the ZT from the Rover 75

MG Rover’s ride and handling engineers had done a brilliant job of turning the 75, 200 and 400 models into MGs – particularly in the case of the 400, which went from being a nondescript and unremarkable saloon into the sweet-handling MG ZS.

Their skill was in coming up with a package of springs, damper settings and suspension bushes that tightened up the cars’ body control and sharpened reactions without turning the MGs into harsh-riding pseudo track cars. It’s a skill found today at McLaren and Lotus.

Those thinking that a ZT 260 is a tyre-smoking, sideways-drifting Q-car will be disappointed, because if you push the car hard you will get understeer.

This was dramatically demonstrated in 2004 during an Autocar feature at Brands Hatch, when the population of 883 V8 Rover/MG saloons and estates was reduced by one after a ZT 260 understeered at great speed into the tyre wall of Clearways corner. 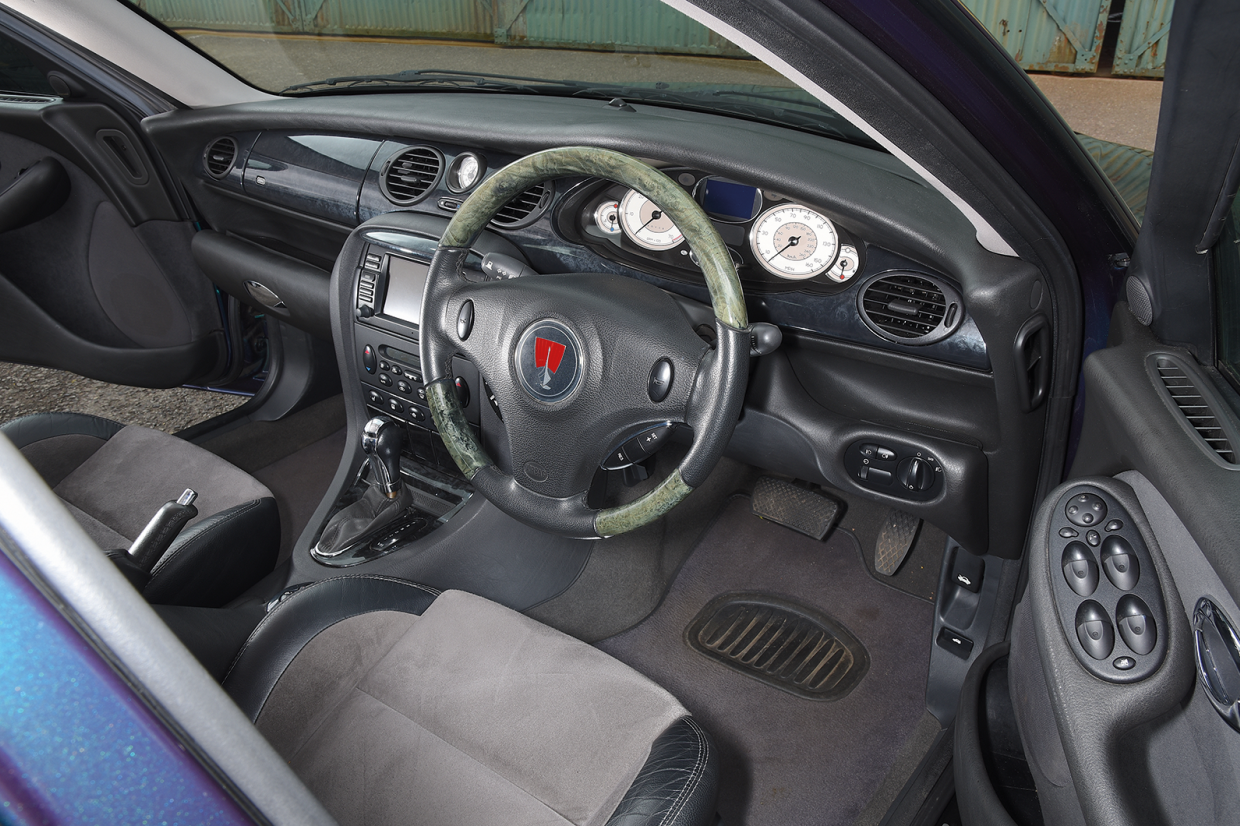 The 75 V8, meanwhile, really is a Q-car. Only the four exhausts give any hint of the firepower that sits under the bonnet. And the enormous radiator grille that was fitted to the Ford-powered 75. It is a distinctive orifice, it has to be said.

Inside, there’s only one subtle clue to the eight cylinders that sit in front of you and that’s the small V8 script just below ‘D’ on the automatic gearbox’s selector gate.

Grainger’s 75 is a Mk2, which means it’s fitted with the BMW sat-nav system – it’s much better than the earlier system of Newey’s ZT 260.

As a 30-something I wouldn’t have countenanced owning a self-shifting version, but driving this automatic 75 has changed my mind.

The four-speed auto ’box, also straight from the Mustang, perfectly suits the V8’s lazy character and the car doesn’t feel slower than the manual ZT. The kickdown function makes it feel livelier, to a certain extent. 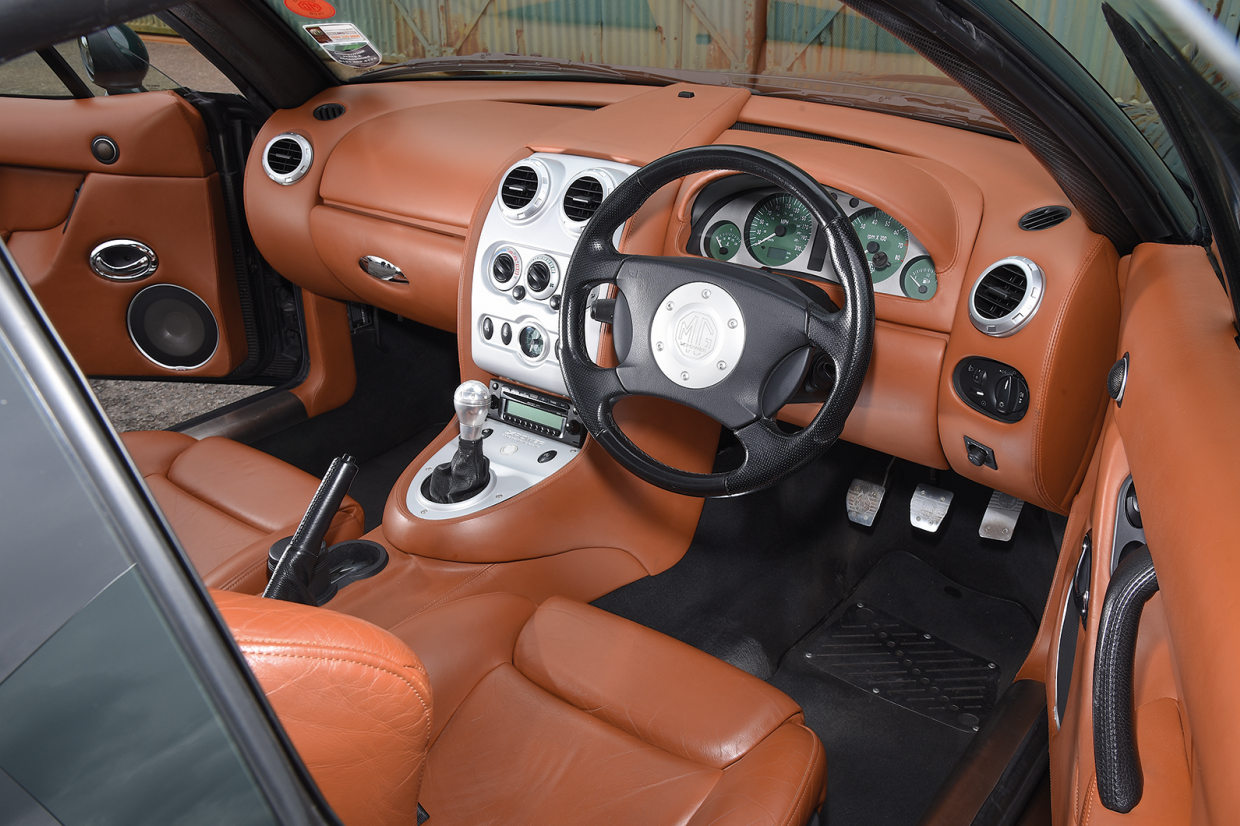 Connolly leather creates a premium feel inside the SV-R

There’s a very healthy sub-tribe of the MG Owners’ Club that specialises in 260s and which plays a big part in keeping the cars on the road.

Rear discs are bespoke to the V8 cars, while the fronts are standard 75/ZT and used to cost £750 a pair until the club had some specially made at half that. A heater hose at the back of the engine next to the firewall will eventually burst but a new silicone replacement has been commissioned that solves the problem. Crunch that big 75 radiator grille and you are in real trouble, because these are unobtainable.

Newey is taking no such chances with his immaculate British Racing Green SV-R. He has a spare chassis tucked away and a vast stash of OZ wheels that he picked up in Italy.

“I’ve sold 40 of them to owners and still have 80 left,” he says. The car itself was bought directly from the receiver for a very competitive price and was once run by Rowan Atkinson.

Newey’s R version is fitted with Ford’s 5-litre 32-valve V8 that produces 385bhp, 65 more than the 4.6-litre SV. The motor is directly related to the two-valve engine fitted to the Rovers and to the non-R XPower cars but it feels very different. Not just because it produces more horsepower, but also because it is far more eager to rev and feels as though it has less internal inertia. 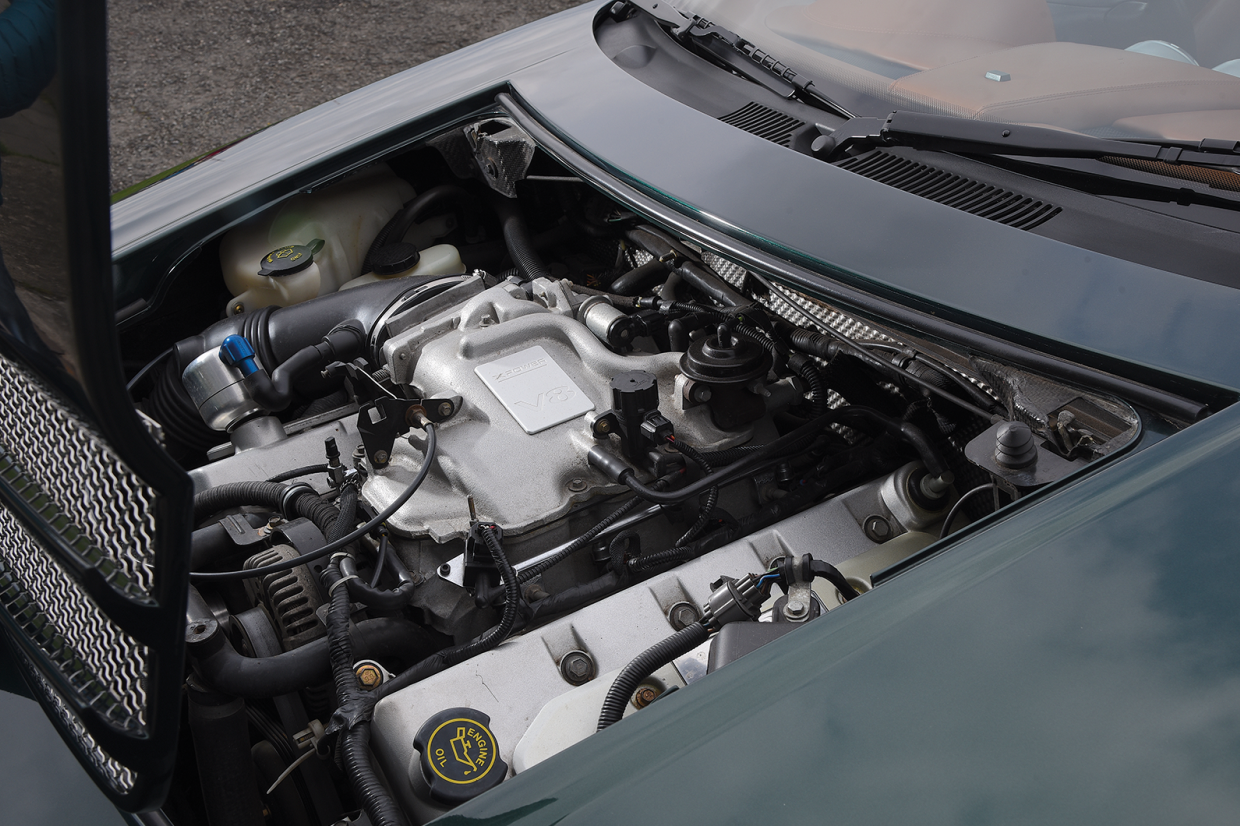 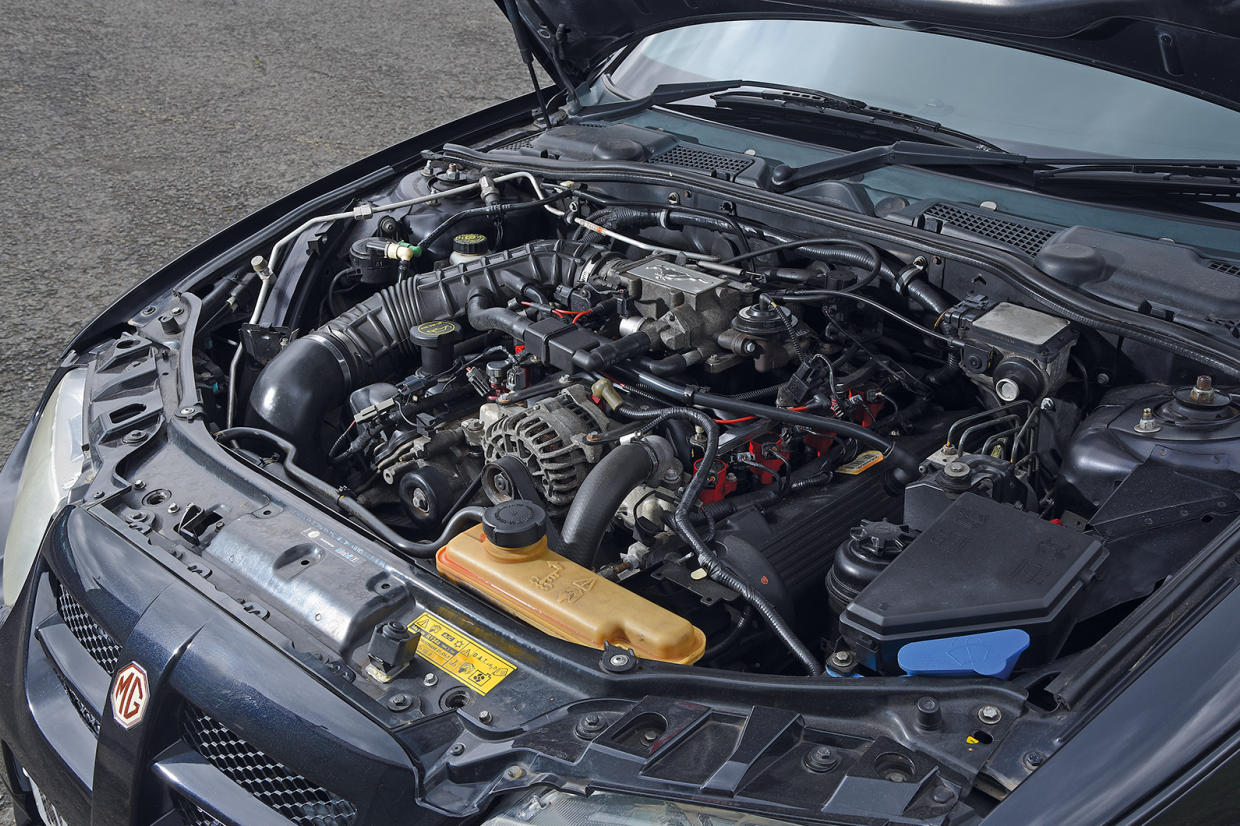 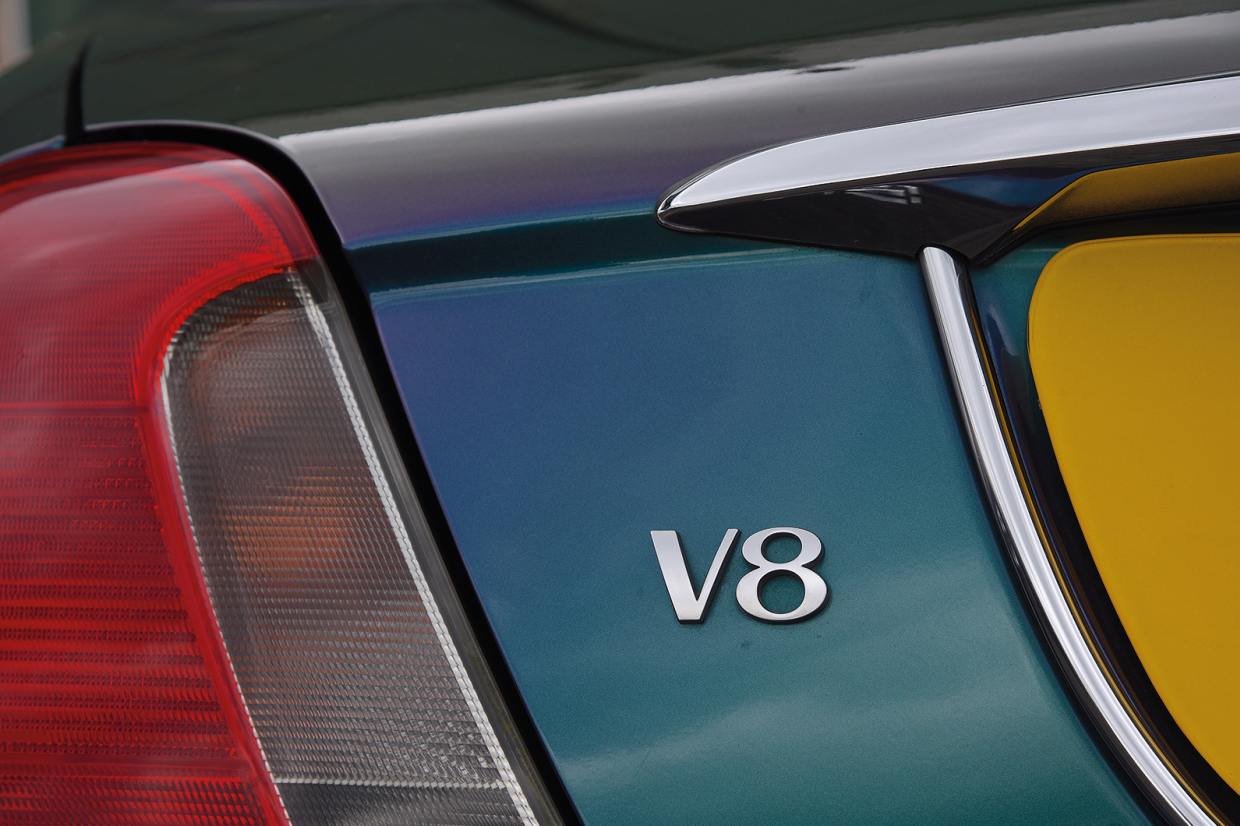 The first thing that hits you when you step into the SV-R is the wonderful smell of Connolly leather. The cars were trimmed and painted in the UK – one of the more straightforward processes in the complicated SV production that included assembly in Turin.

The leather adds a quality feel to what is otherwise a hit-and-miss cockpit that is constructed using a variety of outsourced parts.

The heater dials are from the Maserati 3200GT and the lower controls from the MG ZS. You can play spot the bits all over, from the Fiat Punto headlamps to the MGF doorhandles that had to be hand-fettled to fit.

But if some parts are tacky, the carbonfibre structure itself certainly is not. The quality is stunning, far better than the structures that Ferrari was producing at the time, and without doubt is the standout feature.

Peter Stevens’ design for the SV was controversial and not particularly well received, but its styling has aged well.

Dynamically the SV-R also fell short in critics’ opinions, especially on track because it understeered and lacked balance front to back. Fifteen years later the SV-R’s ride, almost as comfortable as the saloons’, shines. It is a quick, stable and predictable car. 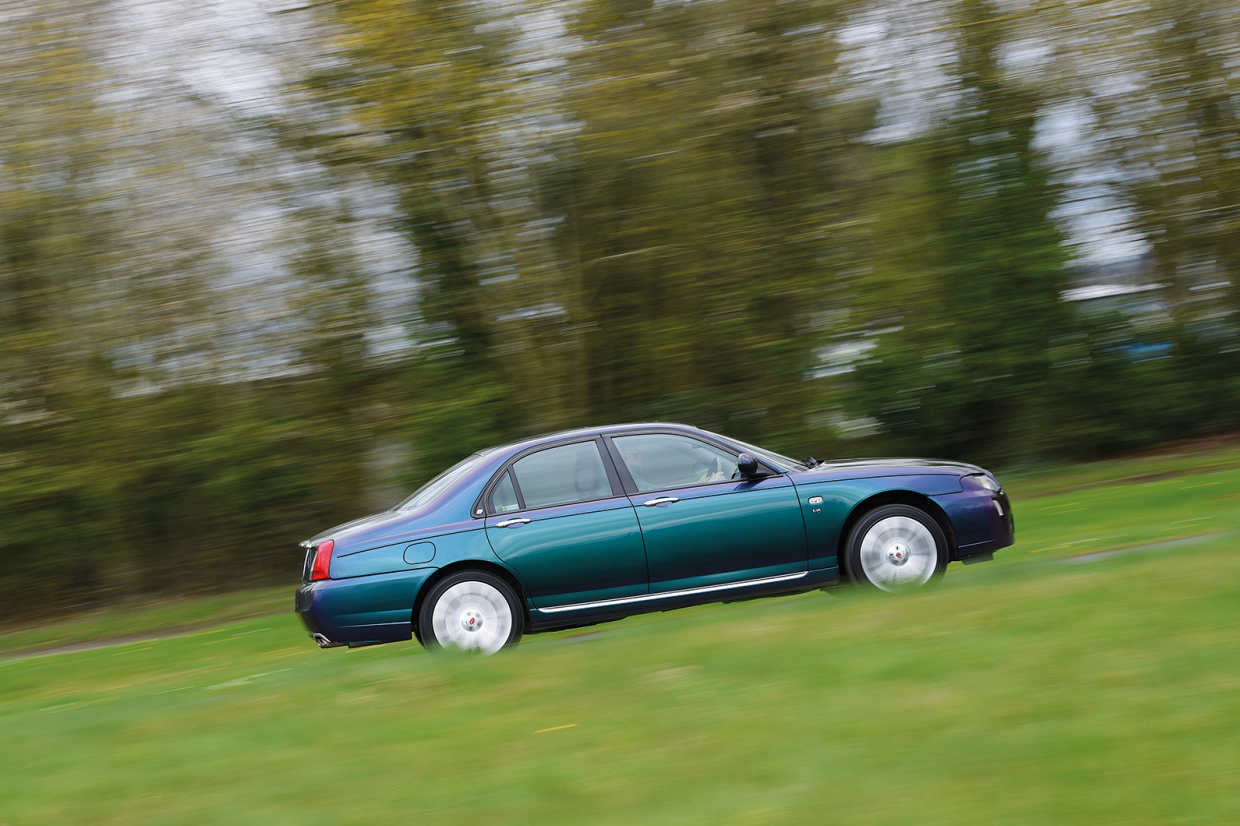 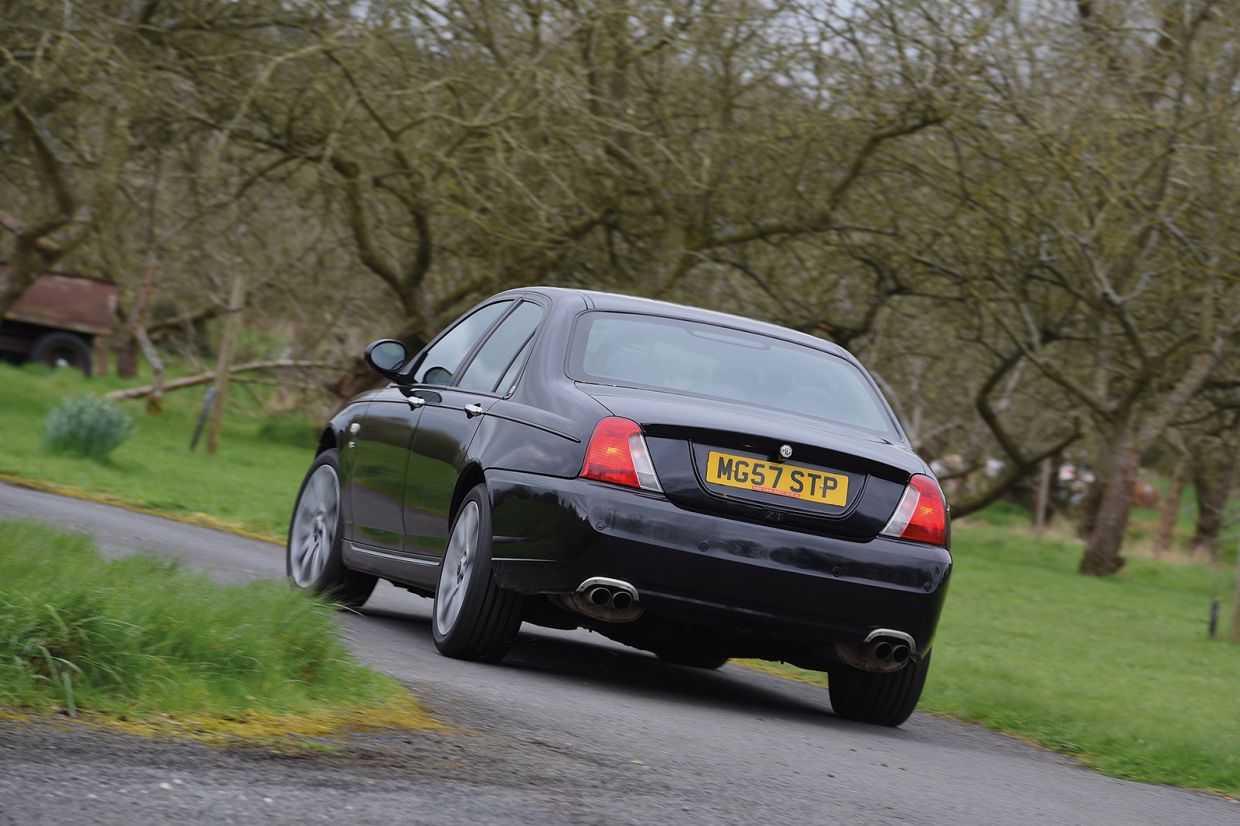 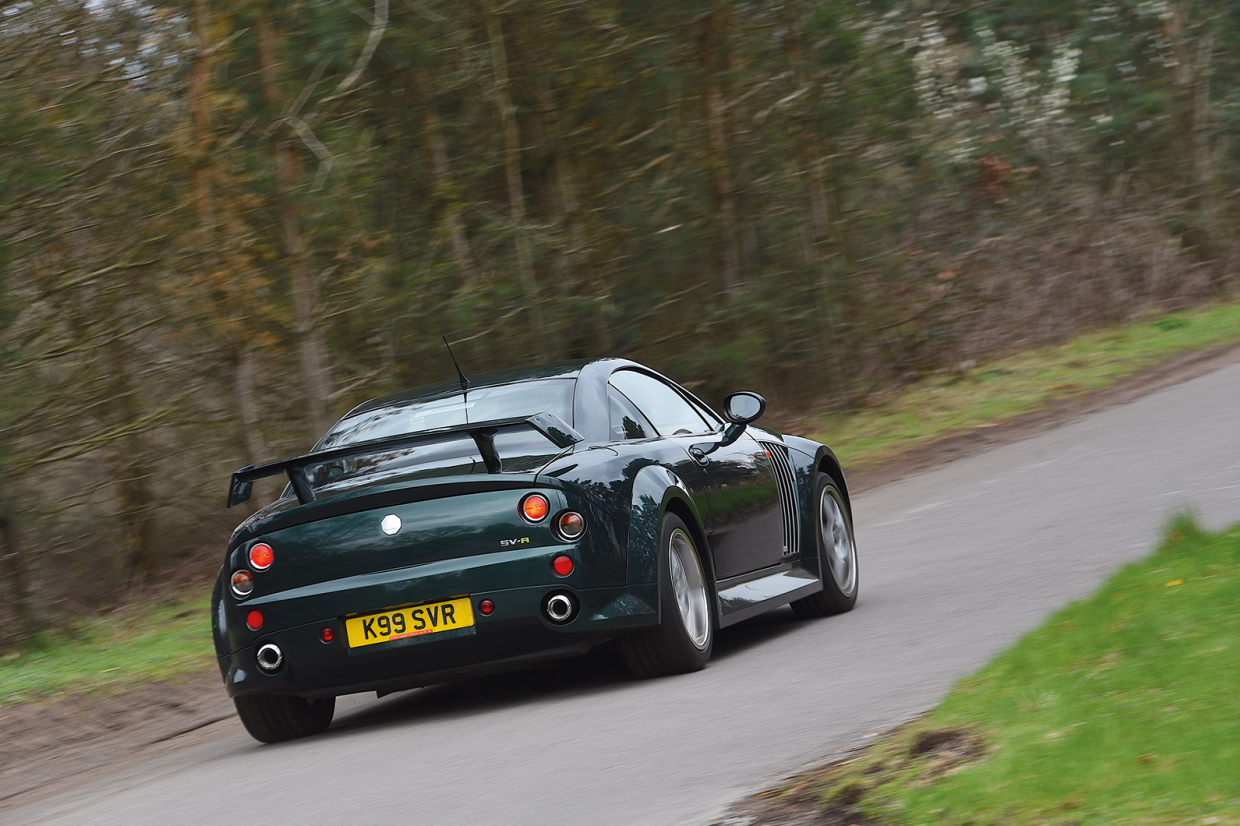 Clockwise from top: larger 18in wheels for V8 75; aggressive styling for the SV-R; twice as many exhausts as the V6 variant

The XPower SV-R is a rare beast and the MG ZT-T 260 estates are too, but the 75 V8 estate makes Ferrari 250GTOs look plentiful: it’s reckoned that about 17 were made.

There is usually a handful of ZT 260 saloons for sale, with prices starting at around £8000 and running up towards £20k for low-mileage and immaculate ones.

As a weekend car, the V8’s eye-watering fuel consumption is less of an issue and, as both Grainger and Newey’s cars show, they were built well and survive high mileages. Expect to pay at least £50,000 for an SV or SV-R – though Newey won’t be selling his any time soon, that’s for sure.

All three represent the dying years of MG Rover, but they are examples of the engineering excellence that was around at the time.

The 10 best design details ever

Colin Goodwin is a contributor to Classic & Sports Car