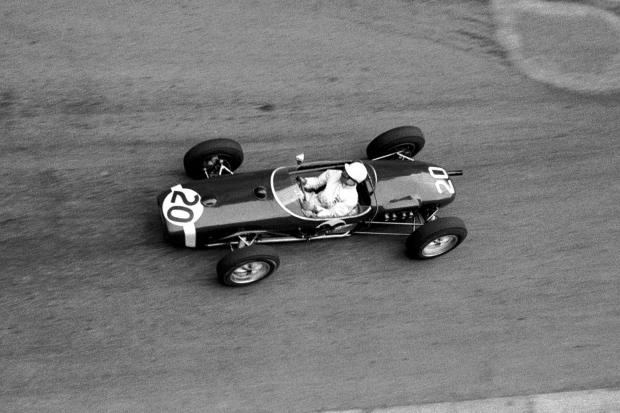 Richie Ginther had an impressive motorsport career. Not only was he a works driver for Ferrari and BRM, he later moved to Honda and gave the Japanese team its first victory at the 1965 Mexican Grand Prix.

And yet he always considered his greatest race to be one in which he finished runner up.

At the 1961 Monaco Grand Prix, after an epic race-long battle, Ginther crossed the line 3.6 seconds behind Stirling Moss.

The little American considered Moss to be the best driver he ever competed against, and was well aware that many – including the man himself – rated the win as Stirling’s finest.

Years later, Ginther reflected that finishing within 3.6 seconds of the maestro’s greatest drive was “just fine” with him… 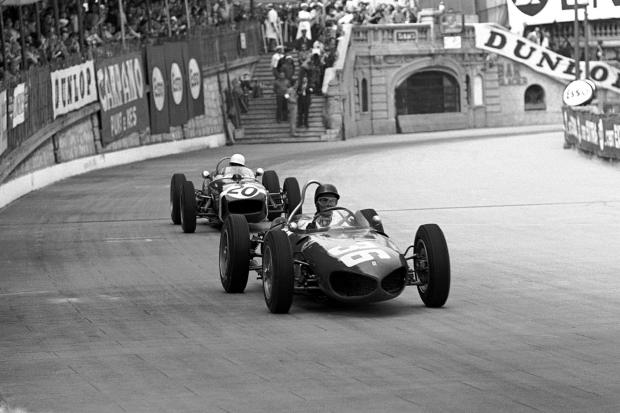 That year was the first of the 1.5-litre formula, and Ferrari was by far the best prepared for it.

The World Championship comprised eight races, and the Italian team contested seven of them. Only twice was it beaten – and on both occasions it was by Moss.

Ironically, the English ace hated the idea of the new engines and considered that they’d be woefully underpowered.

His former team-mate Tony Brooks – who maintains that a Grand Prix car should always have a little more power than its chassis can comfortably handle – agreed, and would retire after a trying season at BRM. 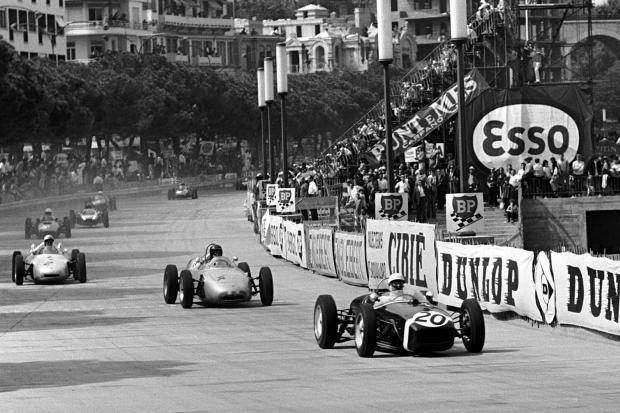 Formula One’s brave new world did, however, provide a certain degree of variety. As the teams gathered for the first round at Monaco on 14 May, Ferrari showed up with its 156 ‘Sharknose’.

Those for Phil Hill and Wolfgang von Trips were equipped with a 60-degree V6, while Ginther’s car had a 120-degree unit.

Dan Gurney, Hans Herrmann and Jo Bonnier had flat-fours in their works Porsches, while the vast majority of the remaining runners made use of Coventry Climax’s FPF ‘four’.

It was soon apparent that Maranello had a significant power advantage. 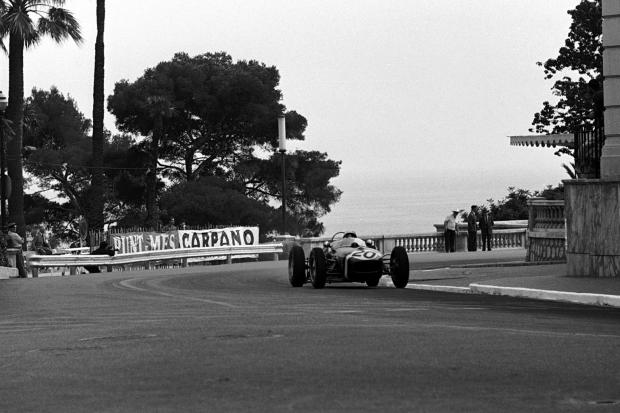 Jim Clark set the pace during first practice in the works Lotus, but crashed at St Devote just after posting a benchmark time of 1 min 39.6 secs.

Both Hill and Ginther dipped under 1 min 40 secs in the next session, but on Saturday afternoon – and with a misfire on his Rob Walker-entered Lotus having been cured – Moss claimed pole position in 1 min 39.1 secs.

His next lap would have been faster still had he not stopped to assist Innes Ireland, who’d had a huge shunt on the run down to the chicane.

Ireland had selected second gear instead of fourth in his Lotus’ ‘back to front’ gearbox. The rear wheels locked, the car spun into the barrier and Ireland was thrown out. Or, as he put it, “I came out of the tunnel without the car”.

He picked himself up and got to the side of the road, where he and Moss waited for medical assistance to arrive. Moss later recalled that Ireland’s main concern was that everything was alright with his ‘wedding tackle’. 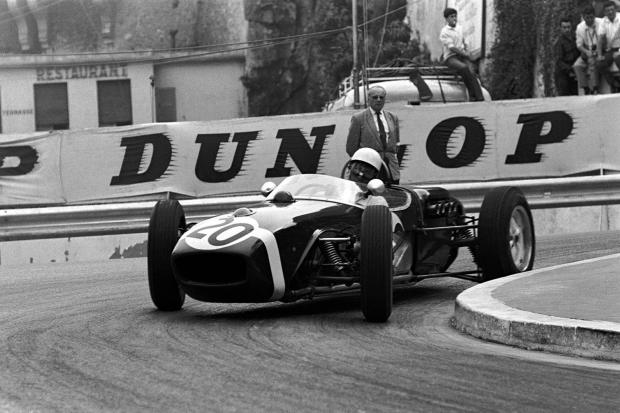 Sunday was hot, and Moss had the Lotus’ side panels removed in order to provide a bit of ventilation. He also found room for a drinks bottle – standard fitment now, but not in 1961.

The countdown to the start wasn’t without its drama. When Moss spotted a crack in one of the chassis tubes, Walker’s renowned mechanic Alf Francis simply welded it up there and then.

The offending crack was near the fuel tank, which was of course full, but no matter – Francis draped some wet rags over it and got to work… 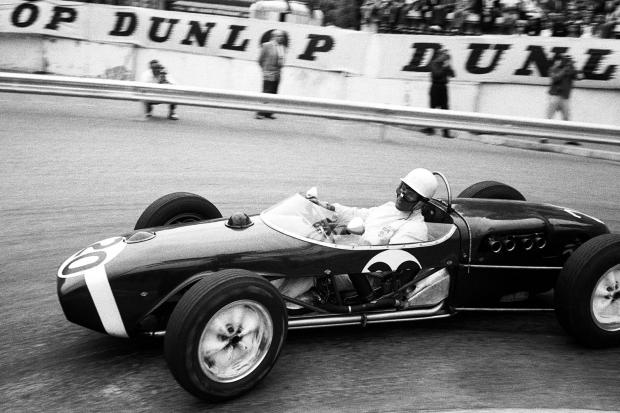 Moss' efforts to improve ventilation were hard to miss!

When the flag dropped, Ginther got the best start and led away from Clark and Moss. Led handsomely, too – after three laps he was five seconds clear.

Shortly afterwards, though, Moss was up into second and closing fast, and Bonnier’s Porsche was being dragged along with him. On lap 14, both of them got past the Ferrari.

Consistently lapping in under 1 min 40 secs, Moss gradually opened a gap over Bonnier, who slipped back into the grasp of the three Ferraris. First Phil Hill got past the Porsche then, having dropped von Trips, Ginther did likewise.

The two Americans set off after Moss, whose lead was cut from 10 seconds to eight, and after 55 laps it was down to 4.5.

All three were now lapping below 1 min 38 secs, but Moss wrongly assumed that the Ferraris were simply biding their time, that they had plenty in hand.

He took huge risks while lapping slower traffic in order to protect his slender advantage. As Denis Jenkinson wrote in Motor Sport: ‘It was rather like a fighter-plane being chased by a superior enemy and being saved by dodging into clouds.’ 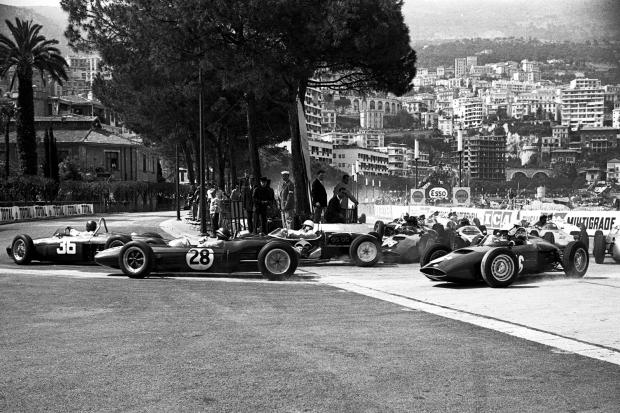 Moss extended his lead to just over six seconds, at which point Ginther – running the more powerful 120-degree V6 – moved ahead of a fading Phil Hill and took up the chase.

Even that wasn’t enough, though. Incredibly, next time around Moss matched his time exactly, putting the gap back up to 4.5 seconds.

It was a psychological hammer-blow, and Ginther’s mood wasn’t improved when he received a pit board telling him to ‘give all’. He wondered what exactly Ferrari thought he’d been doing for the past couple of hours…

He kept charging, though. On lap 96, he took half a second out of the Lotus, but four laps later Moss crossed the line to take victory.

Both men had run at the limit throughout – Moss’ average lap time during the race was 1 min 39.5 secs, which would have been good enough for second on the grid. 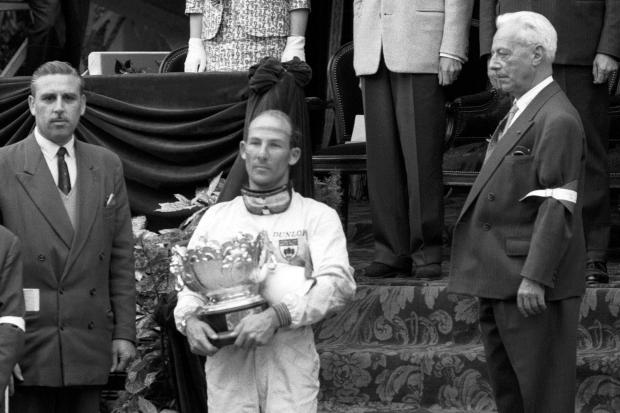 Over the course of nearly three hours, and under relentless pressure from much faster cars, he never missed a gear, ran wide or overshot a braking point. It was a drive that has passed into legend.

Then, three months later, he did it again. By the time of the German Grand Prix, Ferrari had stamped its authority on the season and taken victory in each of the intervening races.

Von Trips won at Zandvoort and Aintree, Hill at Spa, and debutant Giancarlo Baghetti at Reims. Even so, the Nürburgring was, like Monaco, a circuit on which a great driver could truly make a difference – and Moss took full advantage.

During practice, it looked as if there’d be no catching Ferrari. Hill and von Trips had long since been equipped with the 120-degree V6, and Hill set a stunning pole-position time of 8 mins 55.2 secs.

Moss lined up third in 9 mins 1.7 secs, his Lotus’ Colotti gearbox having been jumping out of third gear.

An hour before the race, a shower made everyone switch to rain tyres, but as the weather improved Dunlop advised changing back. Ferrari and Porsche did as they were told; Moss did not. It was to prove a wise decision.

Juan Manuel Fangio dropped the flag to start the 15-lap race, and Jack Brabham sprinted into the lead. It didn’t last – the reigning world champion went off the road on a damp patch during the opening lap, releasing Moss into the lead.

As they crossed the line for the first time, the Lotus led Phil Hill and set about building an advantage. Moss completed the second lap in 9 mins 13.8 secs, but von Trips had moved up to third and he again found himself being hunted down by a pair of Ferraris.

By the end of the third lap, Moss was 10 seconds clear. As an illustration of his consistency, his fourth lap took 9 mins 13.5 secs, his fifth 9 mins 13.0 secs. 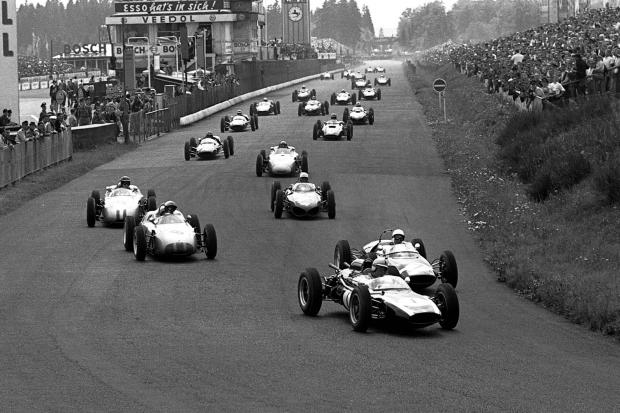 Brabham (Cooper T58) led off the line at the Nürburgring, Moss (Lotus 18/21) in hot pursuit

Von Trips, too, was flying. On the seventh lap he set a new record of 9 mins 4.3 secs and was right behind Hill.

The track was drying out and, for now, Moss was able to respond to the pressure, setting his own lap record in 9 minutes 2.8 secs – but still the Ferraris came, and immediately they bettered that time.

On lap 10, both Italian cars broke the nine-minute barrier – von Trips had got past Hill and was within seven seconds of Moss.

Come the 13th lap, and with two to go, fate intervened. More rain arrived, handing the advantage to Moss.

The Ferraris, running on the dry tyres that Dunlop had advised, would get no closer to the Lotus, and Moss was in the clear.

“On some laps, I’d get as many as 15 corners really right,” said von Trips after the race, “but Moss, he gets them all right on every lap.” 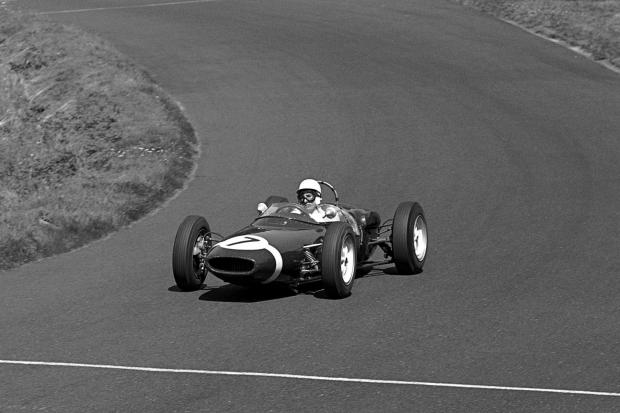 No one could have guessed that it would be Moss’ final victory in a championship Grand Prix.

The last two races of the 1961 campaign were won by Phil Hill and Innes Ireland, and when the Formula One circus reconvened at Zandvoort for the opening round of the 1962 season, Moss was still in a coma following his Goodwood accident.

Since Fangio’s retirement, he’d been the acknowledged benchmark, and stands now as one of the greatest of all time.

His career may have been cut short, but still he left enthusiasts with countless indelible memories – and none finer than his two moments of magic in 1961.