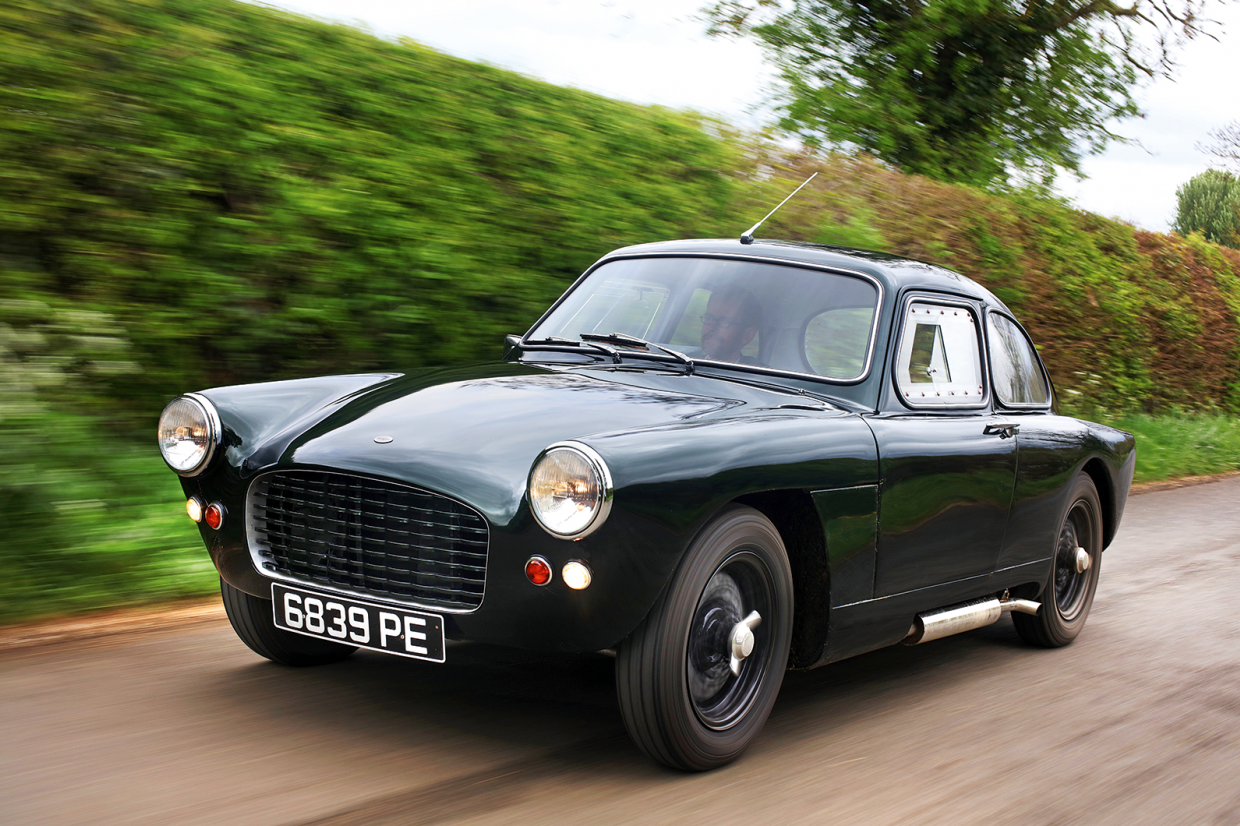 What a golden age the late 1950s was for fans of sporting machinery.

After the privations and post-war rationing – not to mention the awful pool petrol – the decade opened up all sorts of exciting opportunities.

Besides the mainstream MGs, Triumphs and Healeys, there were lots of options for those seeking something individual.

From the bones of a ropey old Austin Seven or Ford Eight, a delightful little roadster could be cobbled together for a few quid.

For those with deeper pockets, meanwhile, a cottage industry of up-and-coming équipes was happy to produce a more sophisticated bolide. 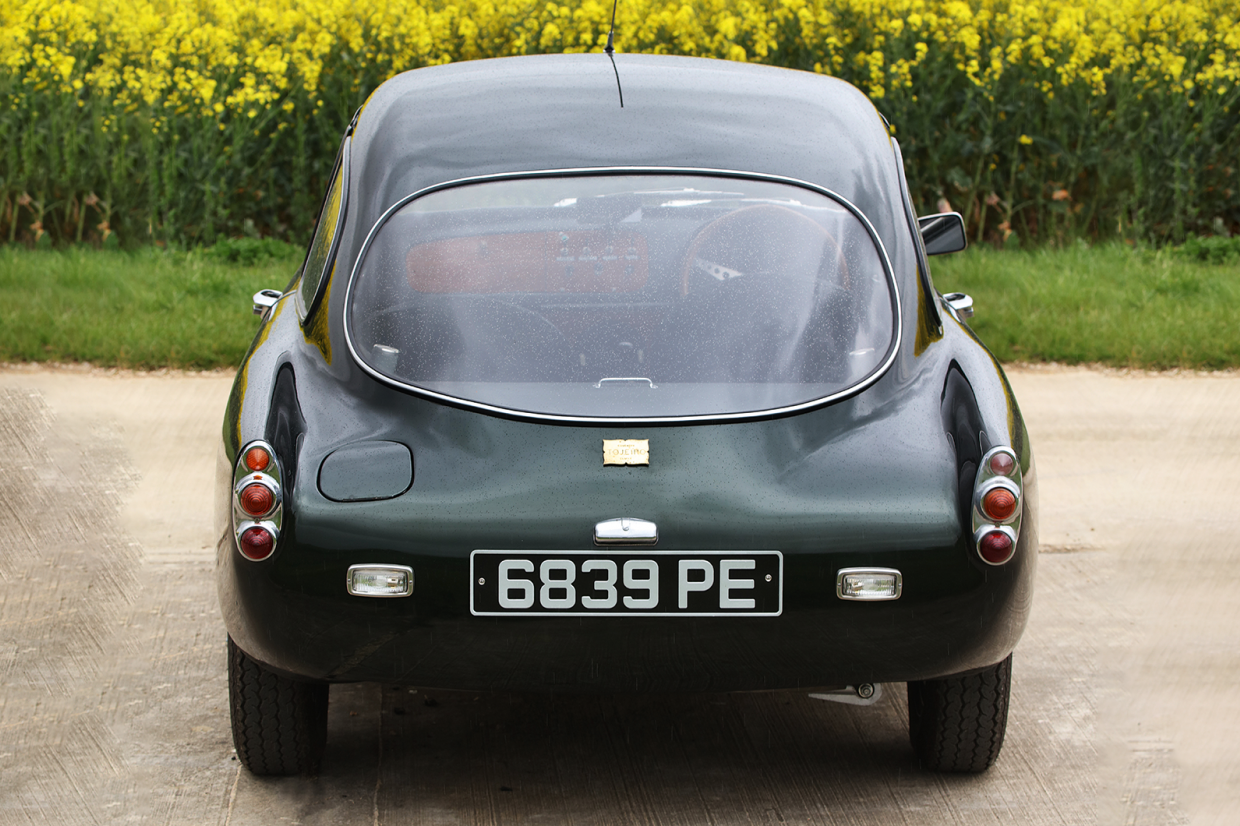 The complexity and cost of developing a car today – not to mention the difficulty of meeting the regulations – means that anything half-decent is unlikely to emerge from a lock-up.

But six decades ago, it seems, the most important items were a fertile mind and a bit of bravado.

With a healthy dose of ingenuity, a few talented people in a railway arch could knock together a credible sports car.

It was an exciting time, peppered with names that would enter into motoring folklore: Lotus and Cooper, Costin and Lola, plus plenty more.

Those backstreet racers could give the big brands a run for their money. And it was in such a context that the fixed-head you see here first saw the light of day. 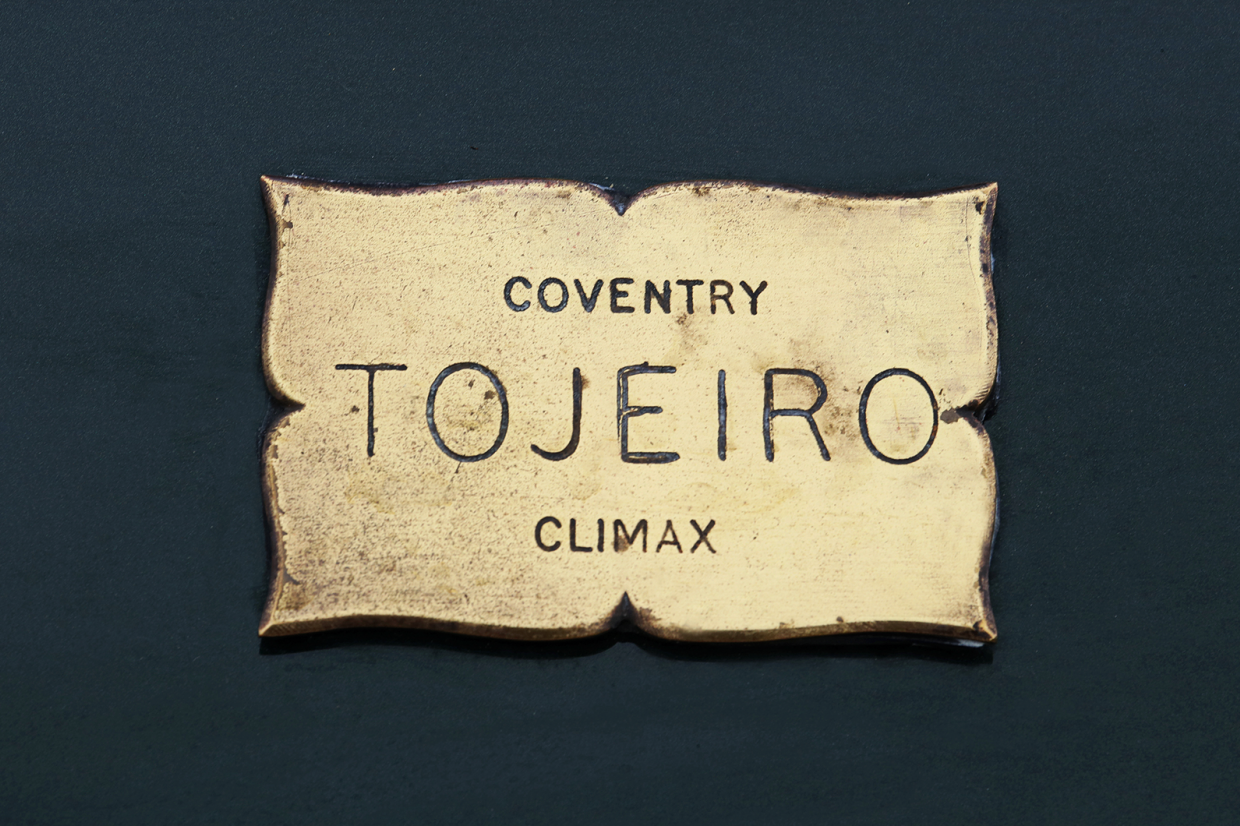 Commissioned by one Frank BP Rambridge of West Clandon, near Guildford in Surrey, the Tojeiro-Climax is the quintessential bespoke coupé for a flat-capped, jacketed chap, probably sporting a ’tache.

Skinned with a streamlined aluminium body by Wakefield and Sons of West Byfleet, below the surface lay a state-of-the-art competition chassis engineered and built by the grandly named Tojeiro Automotive Developments – which was, in fact, a two-man operation working from a shed.

Be that as it may, this was a thoroughly engineered vehicle that, in its ironmongery, was leagues ahead of such mass-market products as the fixed-head MGA with its pushrod boat anchor and leaf-sprung live axle.

Built and fettled by Competition Motors of Weybridge, the car was first registered 1 GPF in August 1958 after a two-year gestation.

Badged simply as a Tojeiro – a moniker that today, sadly, is as likely to furrow brows as elicit nods of recognition – it was pressed into service as its owner’s regular transport, soon racking up some 20,000 miles. 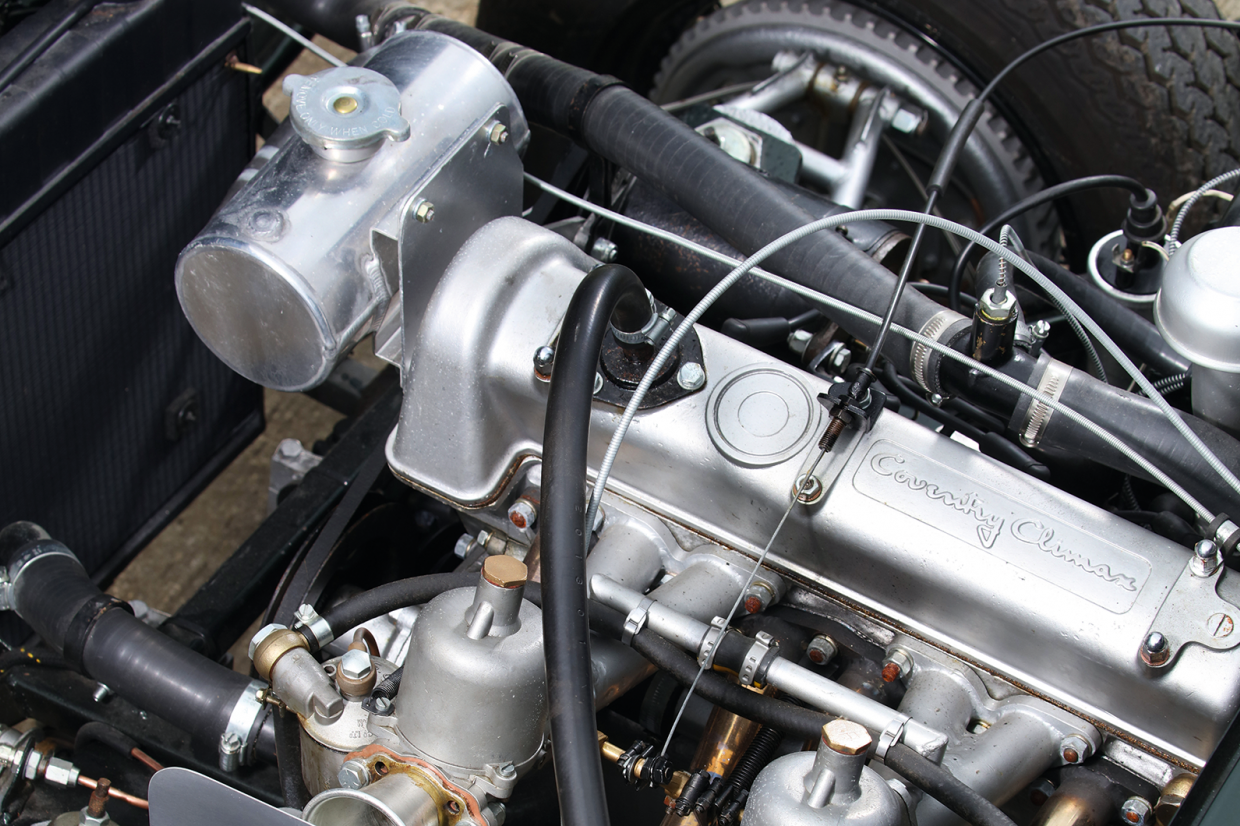 During Bambridge’s time with the coupé, his wife Mary had complained that the steering was excessively heavy when parking, and so the front end was eventually dismantled and modified components were ordered.

Sadly, the original parts were scrapped and the replacements proved to be of incorrect size, so the work stalled when other commitments took over.

The car remained immobile until May ’67, at which point an imminent move prompted Bambridge to part with it.

Re-registered 6839 PE, the non-runner was taken in part-exchange (along with a van and a boat) against a new Mini Cooper ‘S’ by dealer Paul Vasey of Dorking on 12 June.

Bambridge commented unsentimentally that he ‘should be very pleased to be relieved of what takes up so much garage space’. 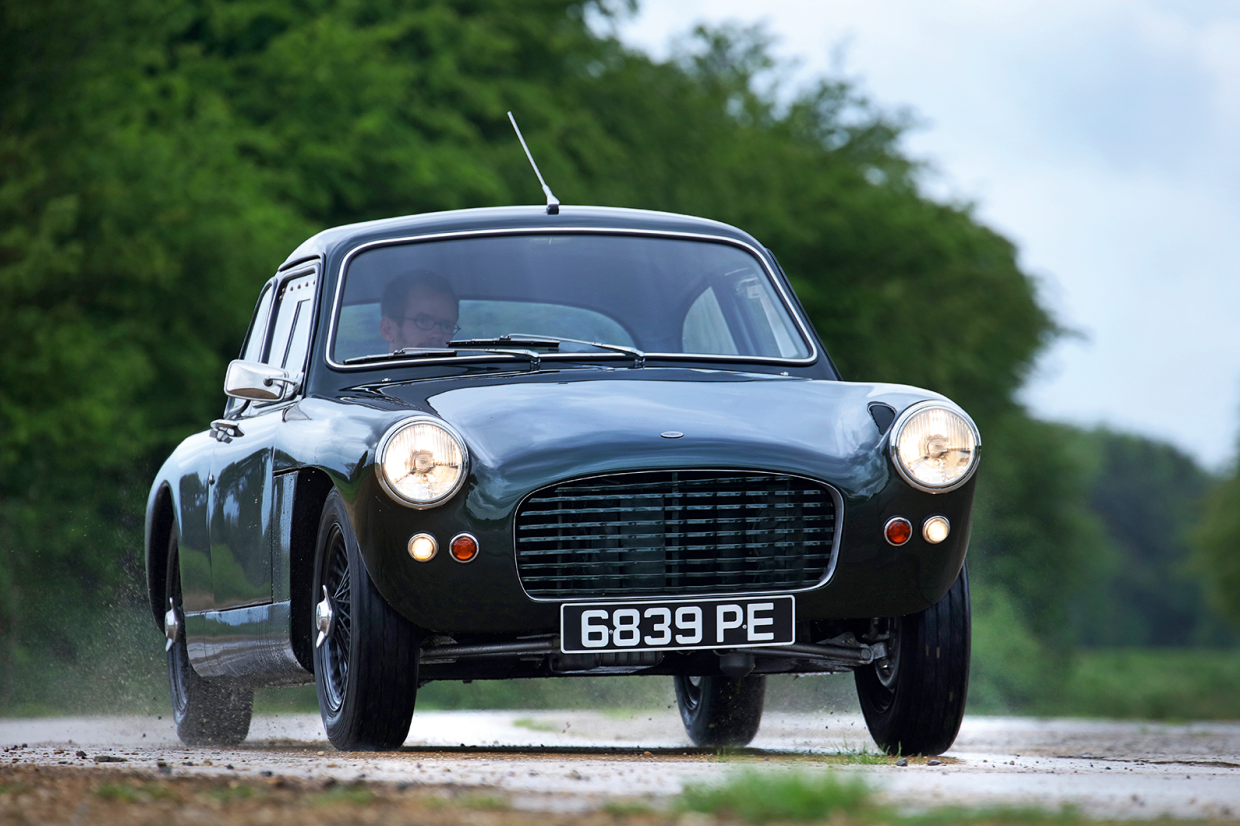 Vasey retained the Tojeiro for 12 months, before he sold it to a Jonathan Carr Selway of Luton in June 1968, but by October it was with one Robin David Elliot Legg of Lincolnshire.

Six months later, Geoff Henderson, then a student at Newcastle University, purchased the car – which he described as being immaculate – for a princely £110. The MGA racer competed with it at a Croft MG Car Club event.

‘The engine was always smooth and willing to rev and the handling good,’ he reported. ‘I used 7500rpm in the lower gears, and the car would reach an indicated 120mph at 7000rpm.’

Despite being full of praise for the baby GT, though, he sold it to his brother Martyn a few months later.

Unfortunately, an illicit race from the pub to a local chippy in 1970 resulted in a damaged bonnet after coming to blows with a hapless cow.

The car was repaired and painted white, then used by Martyn for travelling between the north-east and Hounslow, where he was working at the time. 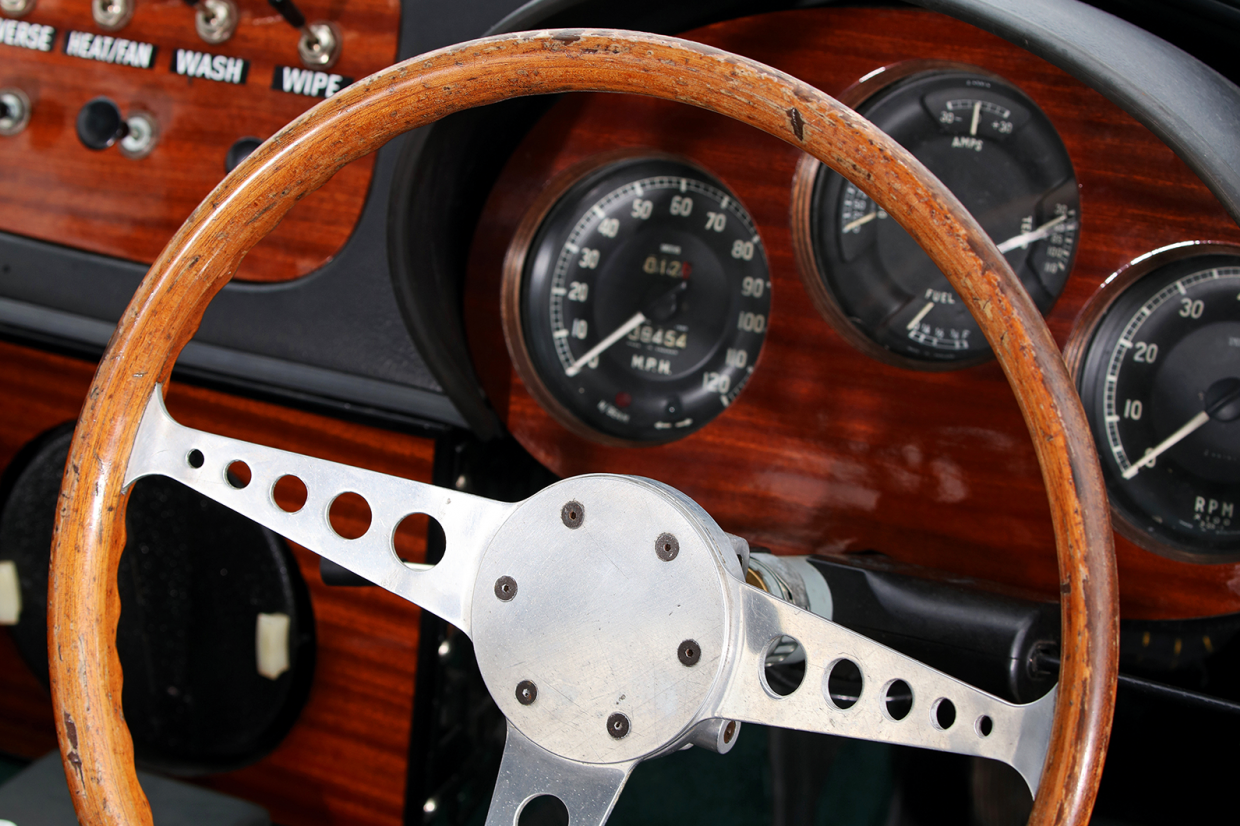 It changed hands again in November 1971, going to Jim Muncaster of Stanley in County Durham. He rarely used the car, which was eventually laid up.

After Muncaster passed away, the Tojeiro was acquired by Peter Barguss, in ’09.

“It was complete but in need of considerable work after a long period of inactivity,” recalls Barguss, who entrusted it to Beacon Hill Garage for a meticulous rebuild, including a respray in the original metallic racing green with black wires.

It’s a remarkably petite device that is gawkily seductive in the same way as so many of its British sporting contemporaries.

The styling melds flourishes from a dozen different makes and models – AC Aceca, Peerless and Gilbern GT, to name but a few – in a way that is both weird and wonderful.

It may come as a surprise, then, that the brief was to produce something akin to the Alfa Romeo Giulietta Sprint. There are elements of that car if you squint hard enough, but nobody could ever claim that this was a direct rip-off. 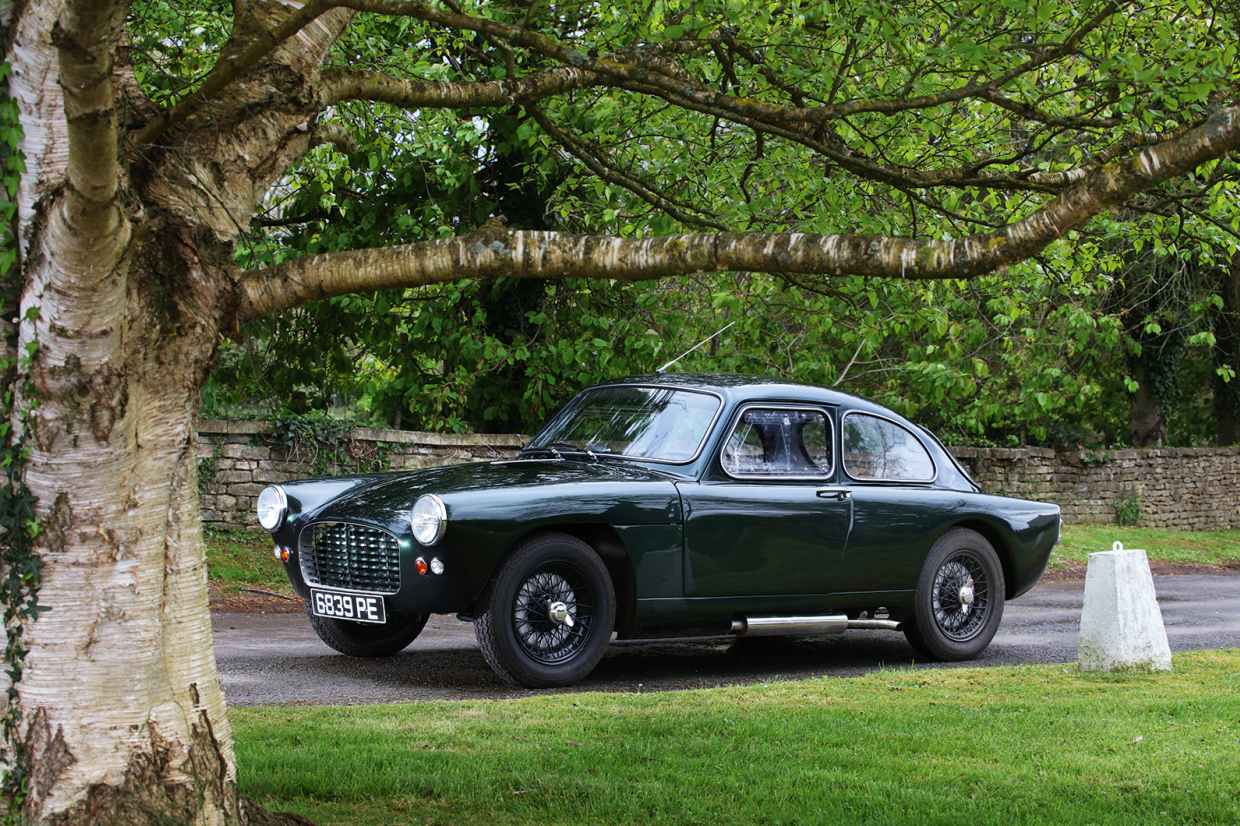 Whose hand was responsible for the shape is something of a mystery; landscape artist and regular Tojeiro cohort Cavendish Morton has been mooted as a possible suspect, but there’s no conclusive evidence.

What is certain is that the coachwork belongs to the school of enchanting naïvety that gave us the Daimler SP250 and early TVRs.

The least satisfying angle is the rear three-quarter, where a wraparound goldfish bowl is perhaps a bit too generously proportioned to sit coherently, but shift your perspective a few paces towards stern or prow and the Toj takes on a pleasingly distinctive flavour.

Nicely resolved details include what looks like a neatly cut-down wavy grille from an Austin Cambridge, and lovely chromed mouldings housing the tail-lights at the end of each subtly befinned wing. 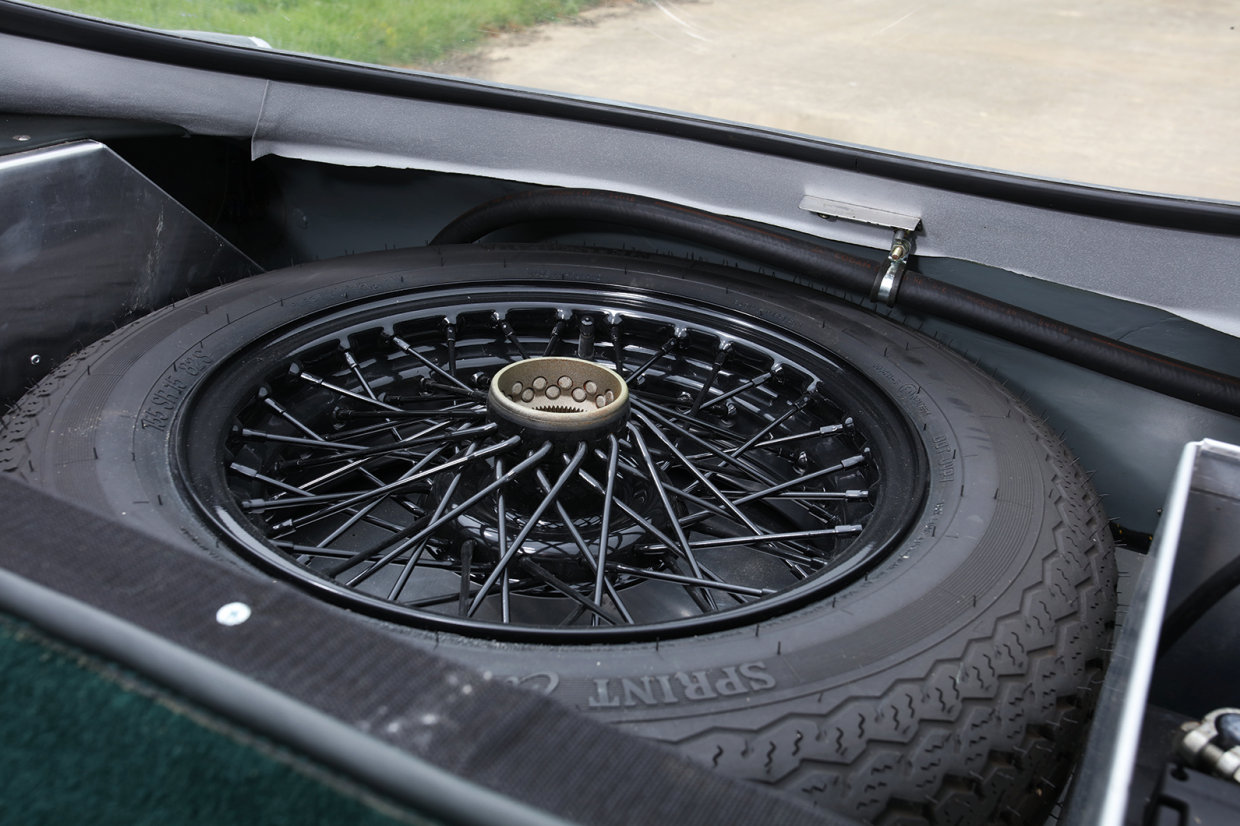 Beneath that hand-beaten alloy skin, it’s a sophisticated piece of kit.

A steel spaceframe supports a coil-sprung front end with unequal-length wishbones plus rack-and-pinion steering, while a de Dion rear axle keeps the tail in check.

Power is provided by the world’s favourite fire pump, the superb 1098cc overhead-cam Coventry Climax FWA, breathing via twin 1½in SUs and bolted to a nicely mechanical four-speed ’box purloined from BMC.

Braking is taken care of by large-diameter Alfin drums at each corner, while the car rides on reassuringly tall and narrow 15in centre-lock wires that are today shod with 155-section Vredestein radials.

Climb inside, and you’re immediately struck by the spacious surroundings.

The roomy cabin is a strict two-seater, but with a large carpeted luggage platform behind you and the spare wheel plus battery housed in a neat compartment at the back.

The fixed rear window and lack of a bootlid mean that they must be accessed from the front, though that’s no real hardship. 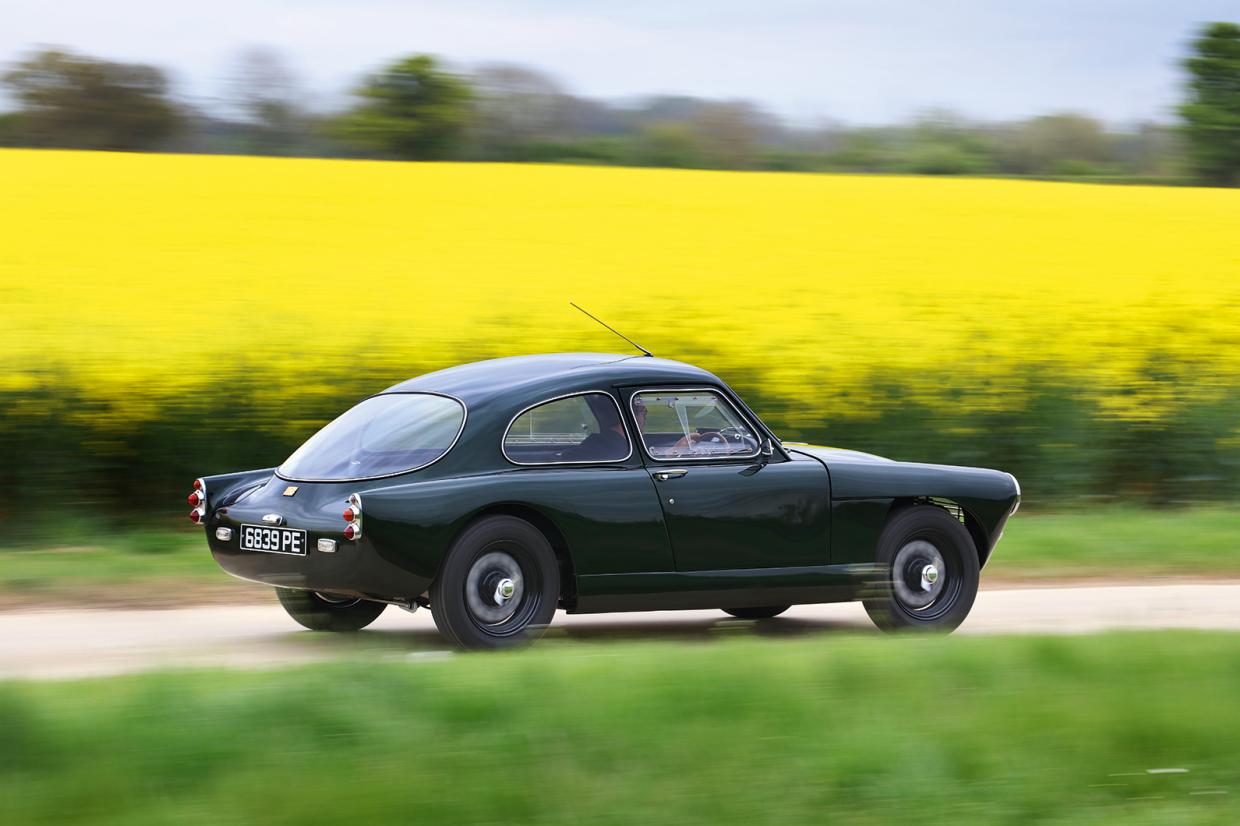 You could be forgiven for expecting a driving position akin to an MGA or a ‘sidescreen’ TR – with the wheel close to your chest and a high scuttle close behind that – but nothing could be further from the truth, thanks to the Tojeiro’s relatively long wheelbase.

The delicious wood-rimmed wheel – complete with a Gullwing-style quick-release mechanism that allows it to be swung upwards for easier access – is within easy reach.

The hooded binnacle – with large 120mph Smiths speedo and 8000rpm tacho flanking a combi dial for temperature, oil pressure, amps and fuel – lends the ambience of a Bristol. The headlamp stalk, in contrast, is from a Citroën.

An ignition lock sits atop the transmission tunnel with a chunky, workmanlike alloy starter button alongside.

It looks as if it was conceived for detonating dynamite or releasing a payload of high-explosives over enemy territory, which leaves you wondering whether it is a humorous wink towards the engine’s origins, or the simple utilisation of what happened to be lying around. 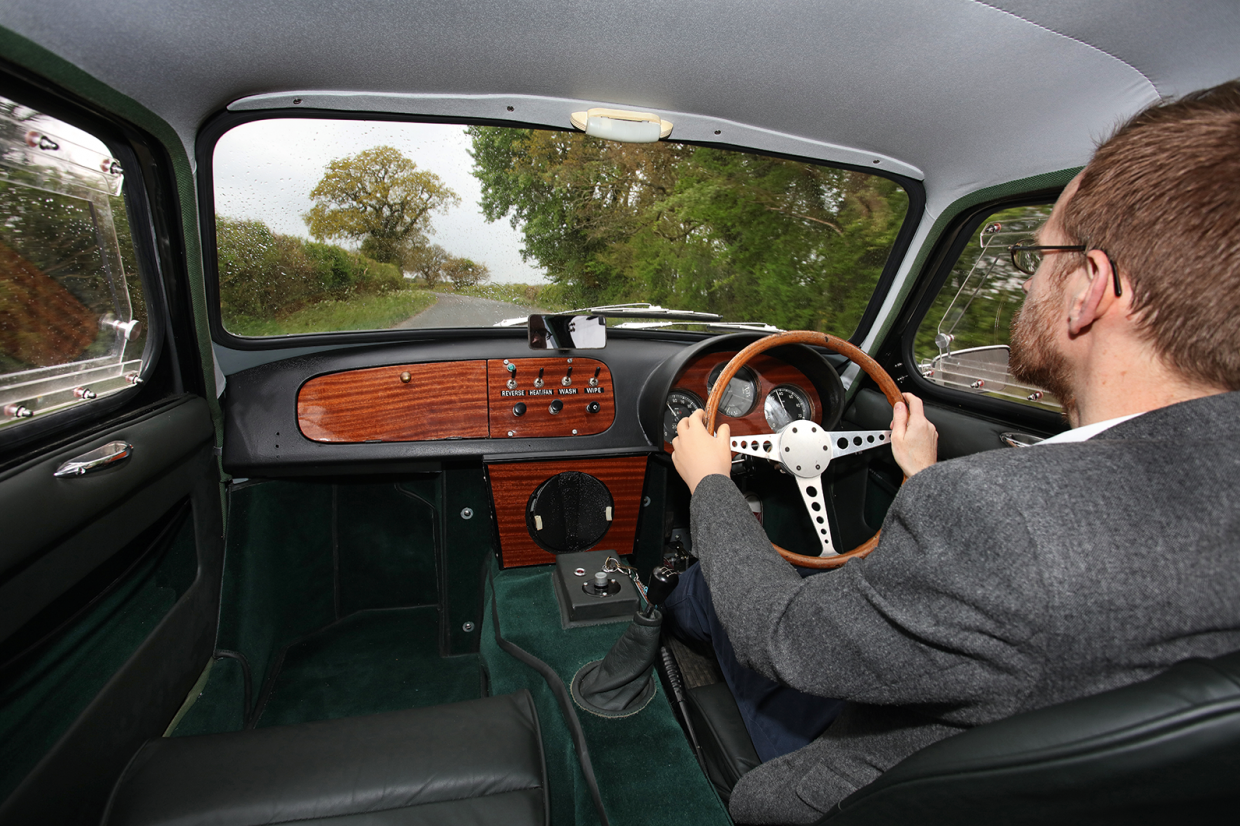 Whatever the case, just twist the key and press the knob to fire up Walter Hassan and Harry Mundy’s sweet four-pot, and you’re met with a raucous mix of intake chuff and a guttural growl from the stainless side-exit exhaust.

The glossy wood fascia and smartly trimmed surfaces give the spartan cockpit the air of a micro GT but, just like an Elite, the soundtrack is pure racer.

It’s thoughtfully kitted out, though, the hollow doors – beautifully finished in the same dark green carpet that clothes the transmission tunnel and floorboards – doubling as handy map pockets.

The gearlever sits a couple of inches further back than you might expect, but it has a nice mechanical feel as you slot it through the narrow gate. 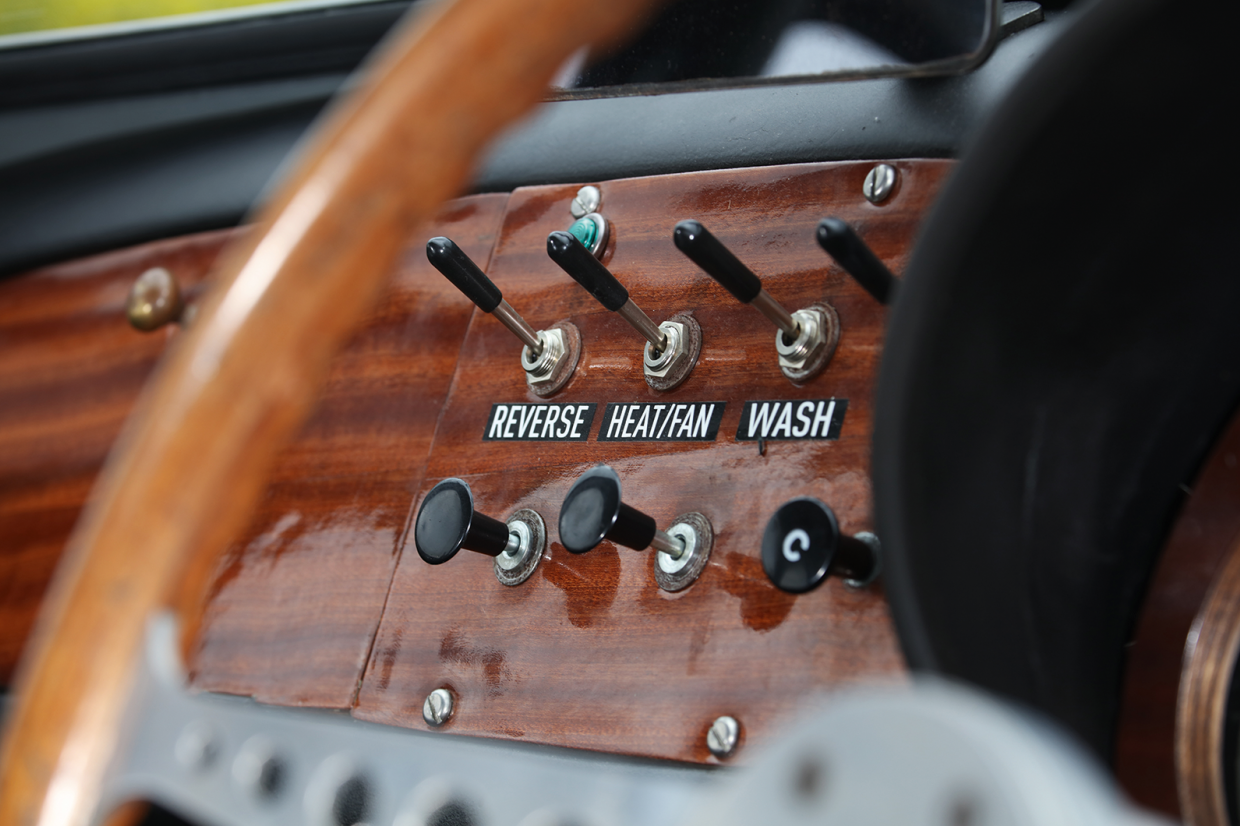 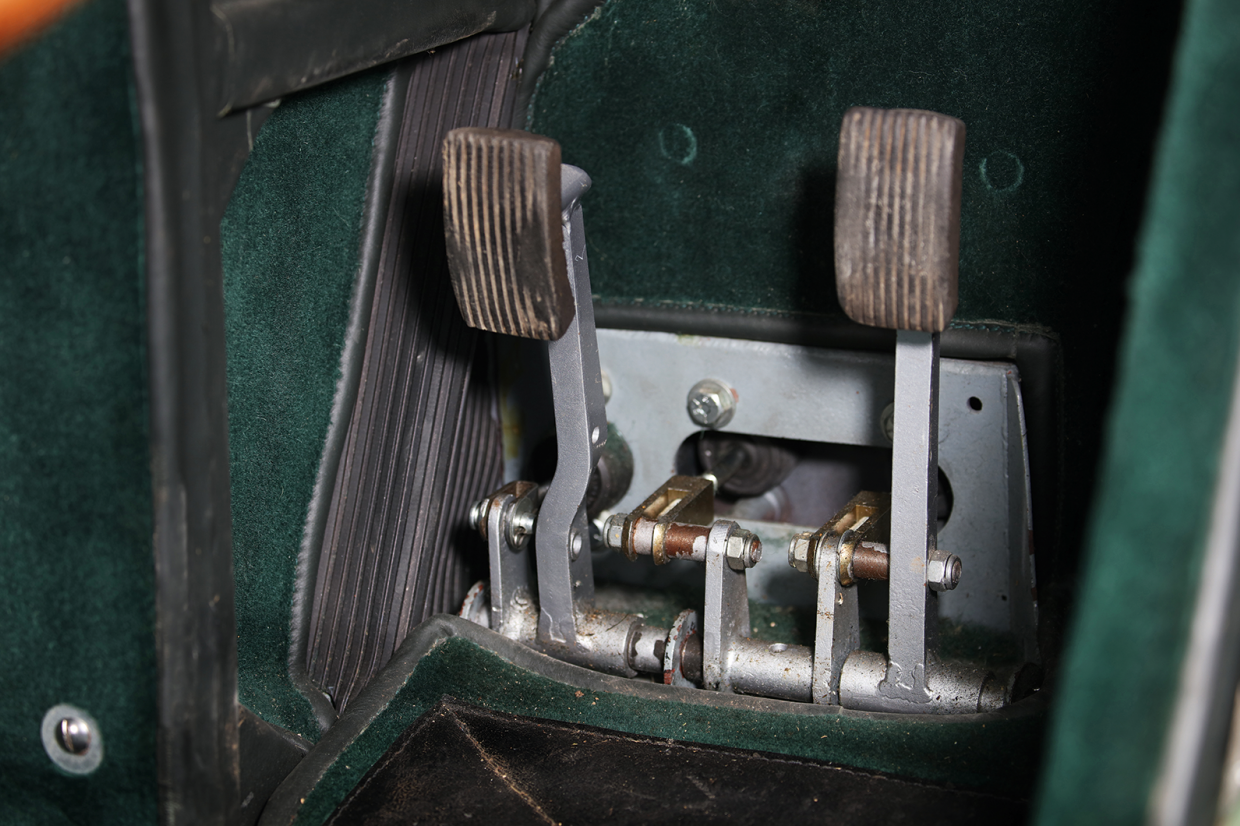 The pedals – floor-hinged clutch and brake plus a pendant accelerator – are nicely weighted and ideally positioned for heel-and-toeing, and there is a small recess on which to rest your left foot when you’re not stirring the cogs.

The steering is a tactile delight – devoid of slop and play – and simply points the car where you want it to go in a reassuring manner belying its age.

Nor does it feel especially weighty compared to models of a similar vintage and ilk – thanks, perhaps, to the intervention of Mary Bambridge?

Combine those superbly considered controls with fantastic visibility and remarkable comfort, and the Tojeiro is a car in which you rapidly feel at home.

Which means that you’re soon enthusiastically punting it along Gloucestershire lanes while dreaming of a busy weekend at the races. 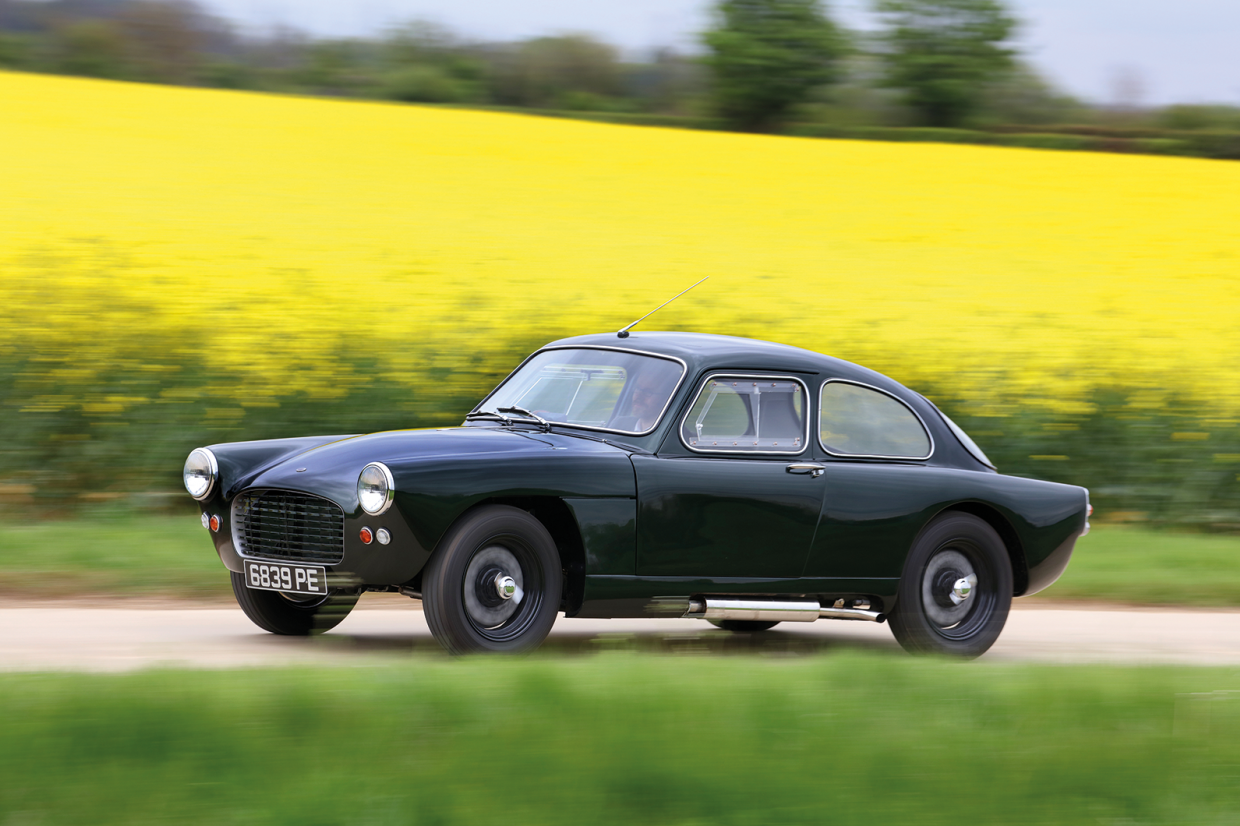 Barguss is unsure exactly how much the Tojeiro weighs, but, with its aluminium body, Perspex glazing to the sides and rear, and top quality but no-frills cabin – not to mention the featherweight lump under the Aston Martin DB2-style front-hinged bonnet – it’s a long way from obese.

The upshot is a nimble, precise machine that just wants to play.

It’s easy to imagine this brilliant, pint-sized fastback eagerly dancing on tiptoes among the Elites at Goodwood, although it would just as easily fulfil a job as a tool for weekend blasts on favourite country roads.

The ability to switch seamlessly from one role to the other is surely the crux of what makes two-seaters of this era so endearing, and the true definition of a sports car. In that respect, this Tojeiro is a definite hit.

And a particularly fine tribute to Mr Tojeiro.

Thanks to Peter Barguss; H&H Auctions

This was originally published in our July 2017 magazine