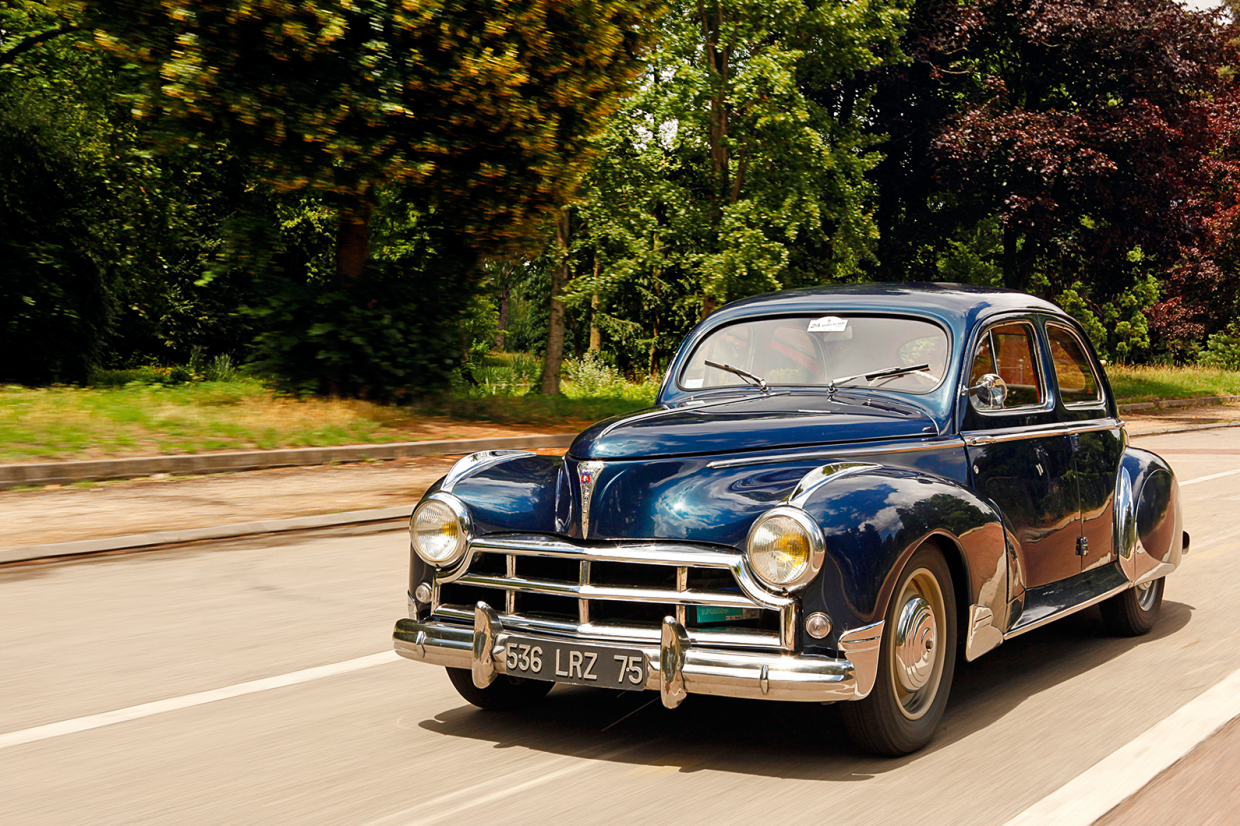 The Peugeot 203 Spécial Darl’mat – to give this car its full name – looks the business: lean, hunkered-down and seemingly wider.

You don’t need a tape measure to be convinced that a substantial 14cm, or 5½in, has been snipped from the 203’s height.

Then there’s the aluminium brightwork, the Americanised grille, the bootlid’s central rib and the rear spats. Showy, yes, but there’s ‘go’ to match, too. 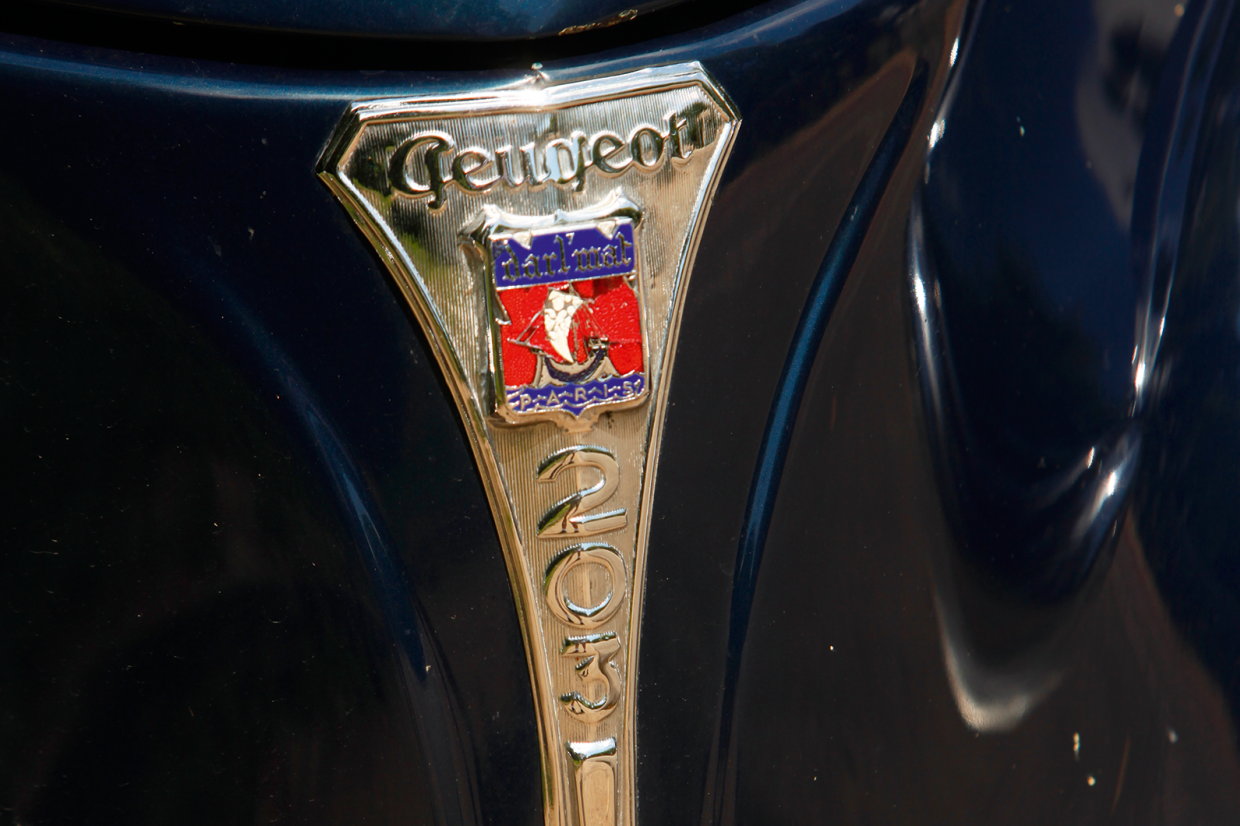 That sort of money would buy you a Hotchkiss or Talbot ‘six’ – or two Citroën 15-Sixes.

The short answer is because the French car industry, struggling after WW2, simply didn’t offer a mid-sized sporting saloon.

Indeed, even before 1939 you’d have been hard-pushed to find such a vehicle in any French firm’s catalogue: there was a big jump from the mainstream offerings of the ‘Big Three’ to the luxury makes, and no low-production sports models to bridge the gap.

Paris Peugeot concessionnaire Emile Darl’mat had already had a more radical crack at the market with the magnificent pre-war 302/402 Spécial Sport, a series of 105 roadsters, cabriolets and coupés styled by Georges Paulin and bodied by respected coachbuilder Pourtout.

Such an extravagance was not feasible post-war, however, not least because Peugeot moved to monocoque construction with the 203 in 1948. 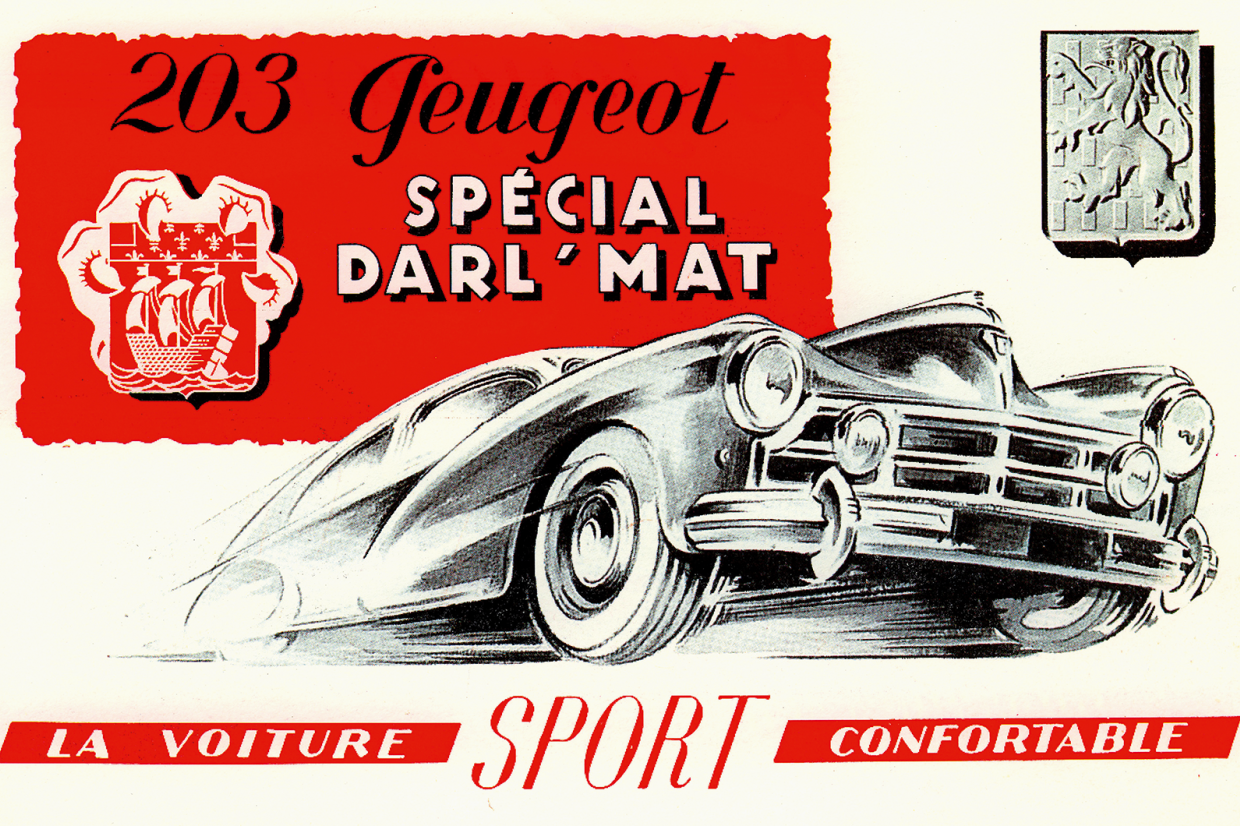 In compensation, the new model offered an enticingly modern base for a ‘custom’.

The rigid shell was underpinned by a well-located coil-sprung live back axle, anchored by a torque tube and Panhard rod.

It had rack-and-pinion steering and hydraulic brakes, plus an up-to-the-minute wet-linered engine with an alloy head incorporating hemispherical combustion chambers.

Raising the output of this revvy 1290cc oversquare ‘four’ from 42bhp was easy enough. A skimmed head pushed the compression ratio from 6.8:1 to 7.5:1 and, with the addition of a second 32mm Solex carb on a Nardi manifold, plus a four-into-one exhaust, power jumped to 50bhp.

This made the 203 good for a whisker over 80mph, against the standard car’s 70mph.

But what set the Darl’mat 203 apart was its coachwork, sometimes finished in smart metallics. 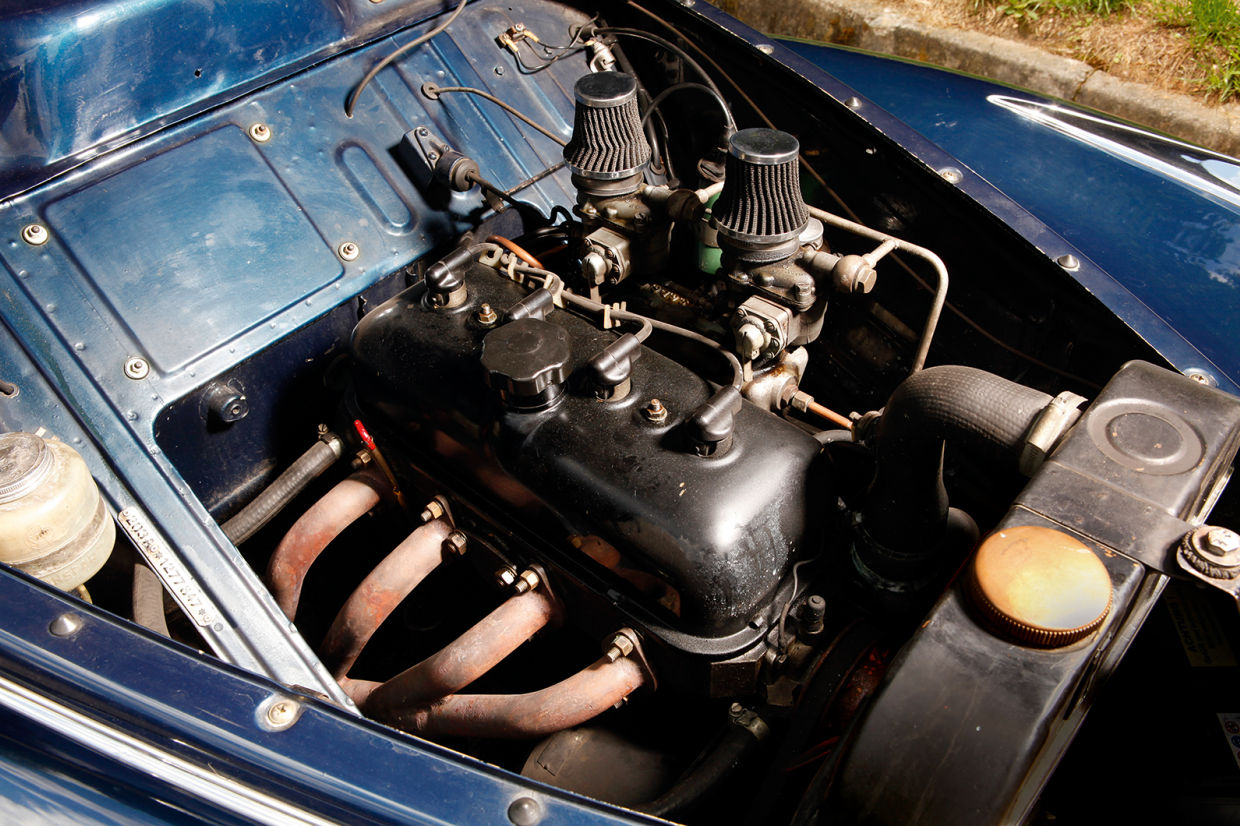 As Peugeot’s biggest Paris dealer, Darl’mat persuaded the Sochaux factory to send him the cars in part-knocked-down form, making the transformation easier.

This was carried out in his first-floor workshops in the 15th arrondissement, and was extensive.

The pillars were chopped by 7cm (2¾in), but that was only the start. The bonnet was sectioned to sit lower, a new bootlid was fabricated from scratch, with that wonderful fin, plus the wings were retailored.

Those at the rear were widened and given spats, while at the front the arches were refashioned. This was necessary to allow lock to be applied, because the remaining 7cm of height reduction was accounted for by lowering the suspension.

The transverse front spring was reversed and bolstered by an additional upper and lower leaf, and the rear coils were cut and retempered. 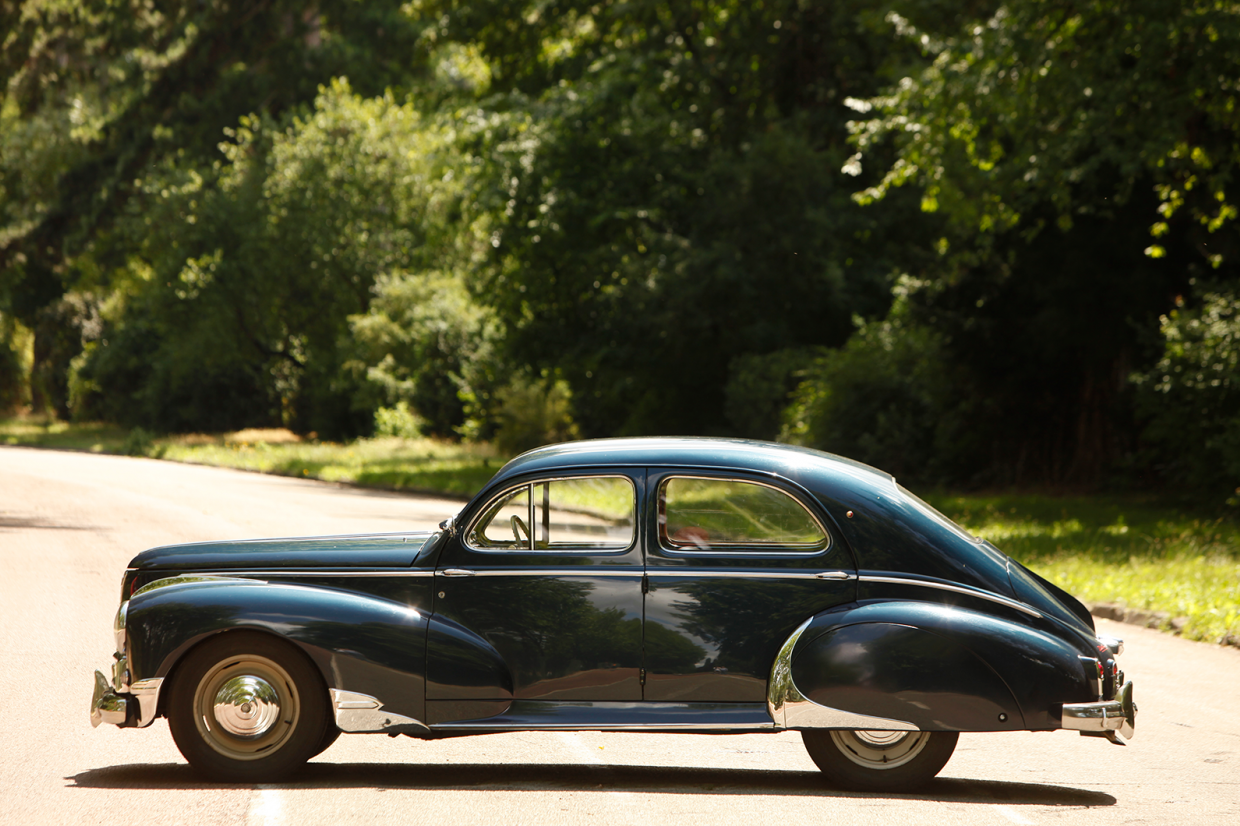 This rare coachbuilt special is lower, but not longer or wider than the base car

Such a radical makeover, which included new glass, was made less challenging by the use – at least on later examples – of the stronger underpinnings of the berline découvrable, or convertible saloon; this had reinforcements to the A-post and in the boot, as well as deeper sills.

Given France’s love affair of the time for aluminium dress-up items, it’s no surprise that Darl’mat pandered to this fashion.

The Spécial was equipped with wing-top trims and an alloy fire-grate grille, both made in-house, plus polished-aluminium stoneguards on the front and rear wings.

Other mods included a fuel filler hidden in the boot and twin auxiliary lamps (on most cars), plus flashers rather than the trafficators standard on 203s until September ’56.

The reason for using flashers was simple: cutting down the roof eliminated the trafficator housings behind the rear doors. Another casualty – on many conversions – was the sliding roof fitted to better-equipped 203s: it would have entailed losing a further 2in of headroom. 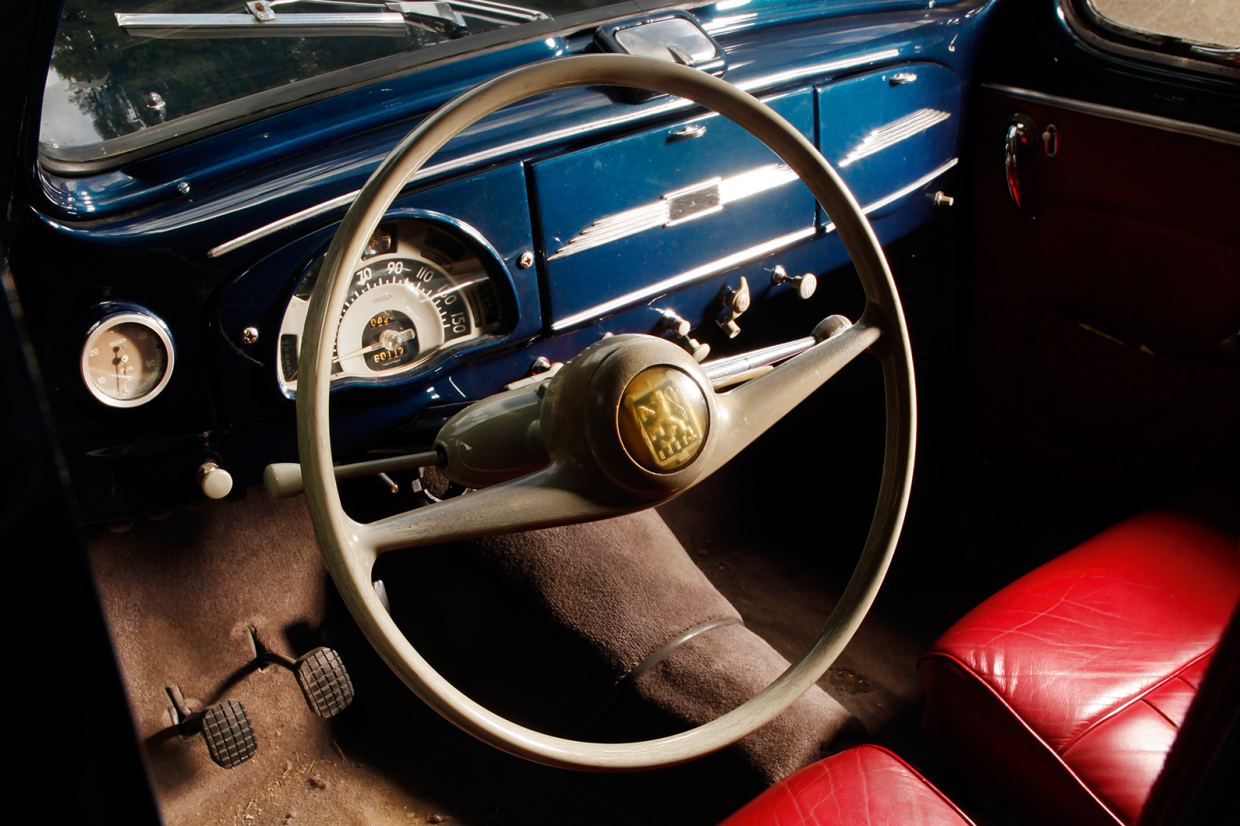 Some cars had a special dash by Taupin, with a large rev-counter in front of the driver and two round central dials, but the regular specification retained the standard dashboard, merely adding a small tacho to the left of the usual instrument block.

With typical attention to detail, it was mounted in a pod integrated into the dash. In general, a special steering wheel from Quillery was fitted, but the type of wheel could vary because the cars were made to the order of each client.

In the same fashion, at least one car had its dashboard finished in crackle-black paint. Road wheels were also according to the customer’s wishes, and wires – or just wire trims – could be fitted, or alloys. 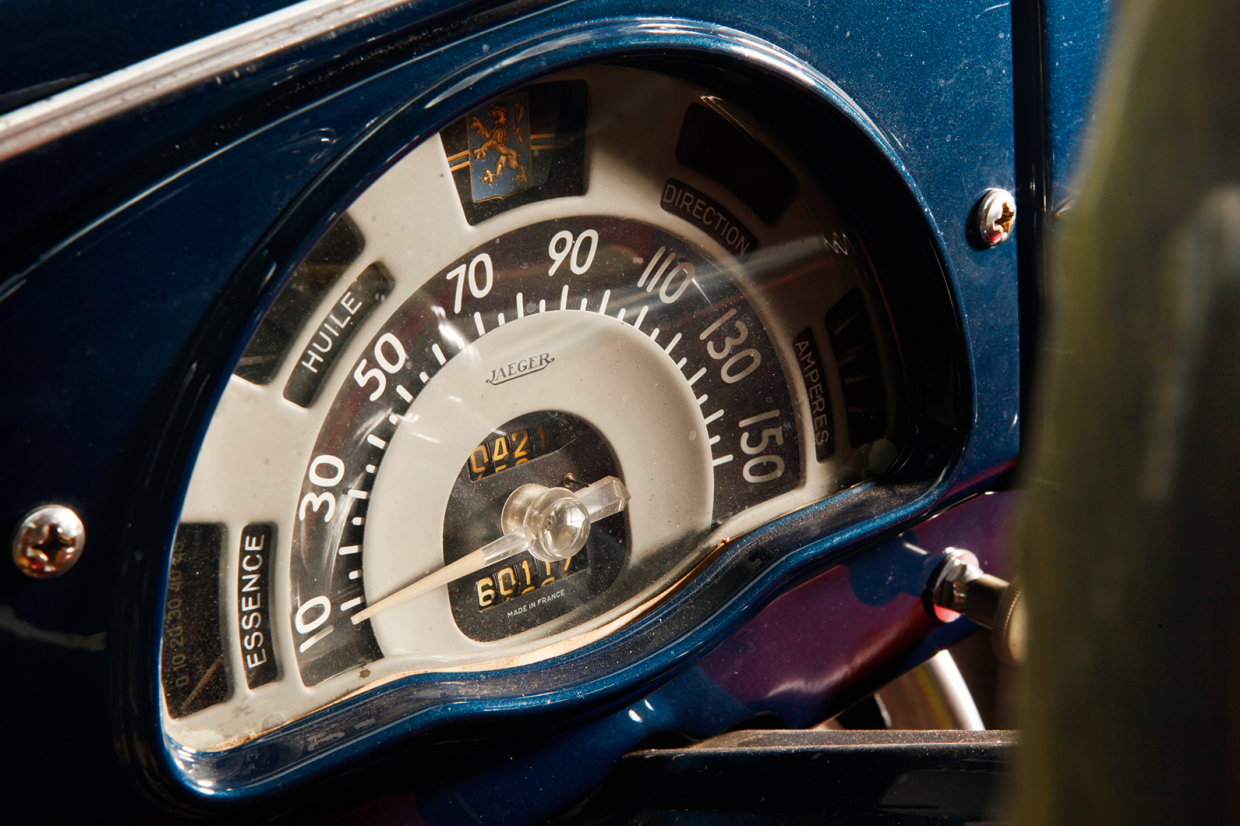 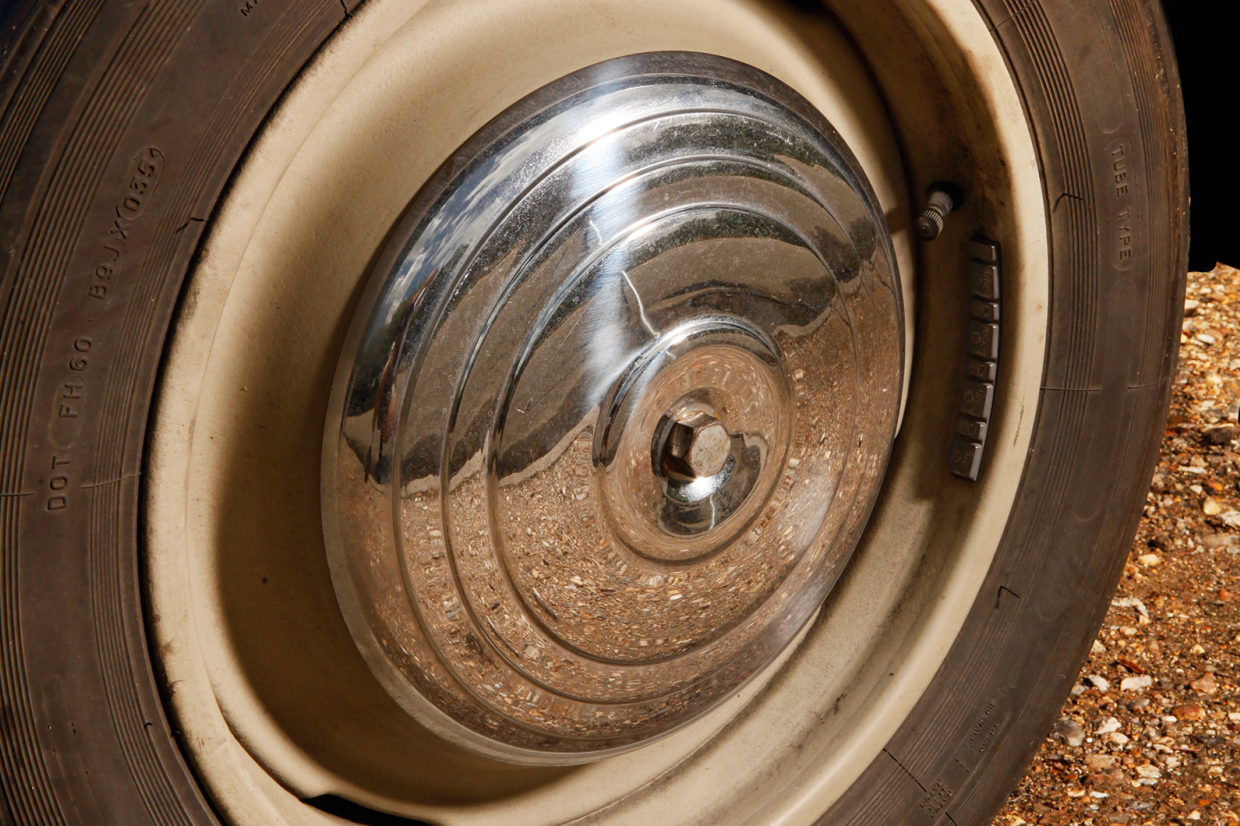 Stylish dials in the dashboard; larger hubcaps on standard wheels

You could even specify a Cotal electromagnetic gearbox – and other tuning options were soon offered. These included a single-choke Weber carb and a Constantin blower.

More fundamentally, from 1952 the engine was bored out to 1467cc. In this ultimate form the power rose to 60bhp, making the Darl’mat close to a 100mph car, unless one chose acceleration against cruising speed and opted for a shorter final-drive ratio.

A big-bore engine with the Constantin supercharger obviously had more muscle, but the 80bhp these units developed looked less appealing when it became apparent that they were prone to eating their pistons.

This means that later cars, from the ’53 model year onwards, have the larger rear window fitted to the 203 from autumn 1952.

Among their number were two cabrios, featuring all of the regular Darl’mat mods including a reduced-height windscreen.

Today there are 11 recorded survivors, including the 1467cc example here, a 1953 car owned by the Darl’mat business, which is still very much thriving as one of France’s biggest Peugeot dealerships. 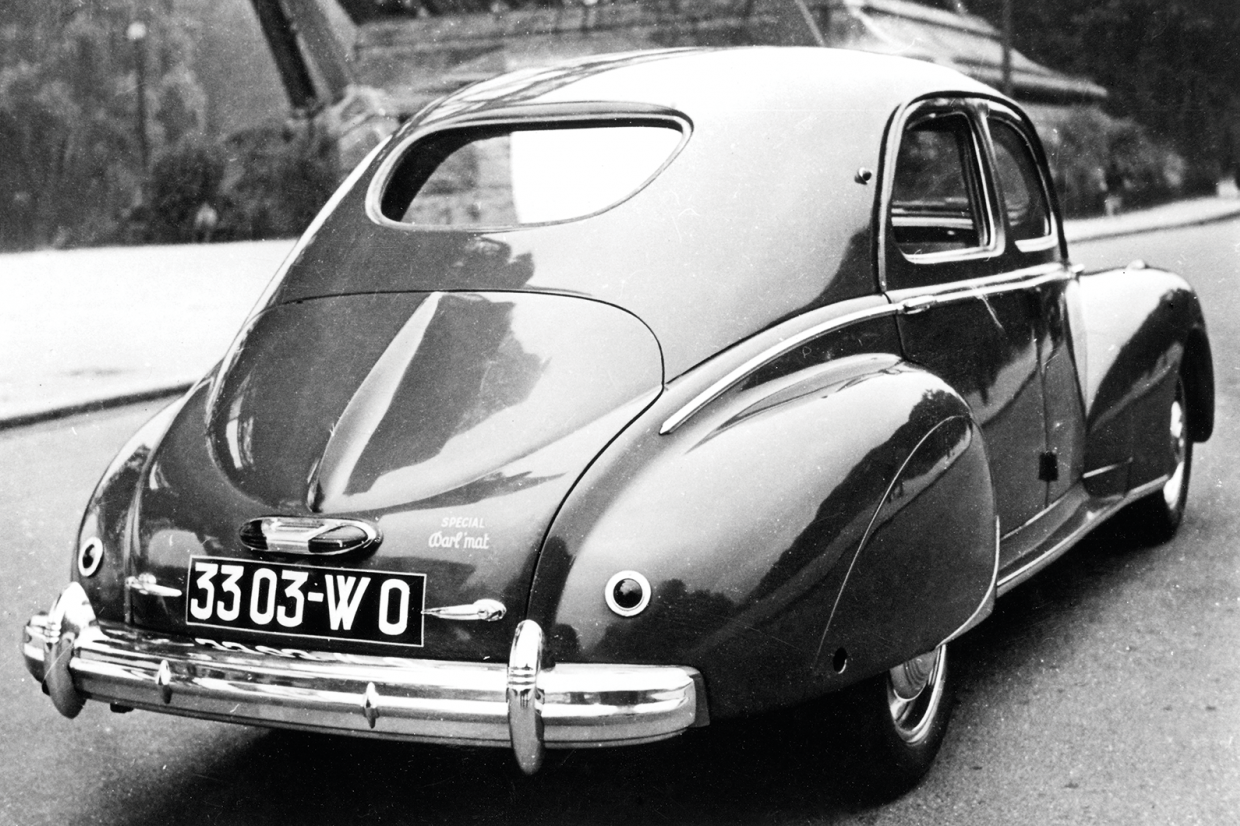 This earlier car has different lights and a smaller rear window

Sampling the low-slung saloon it’s soon clear that it’s a Peugeot 203 – solidly engineered, pleasing – and then some.

So it’s capable, with no obvious flaws, and eminently drivable – but with extra-spirited performance.

The column gearchange, mated to a smooth clutch, is notchy but easy. First (unsynchronised until ’54) is towards you and down, then there’s a sweep across and up to second, going down again for third and up and away for fourth, which is out on a limb that befits its status as an overdriven, high-geared cruising ratio.

Nicely progressive, modern-feeling brakes reassure in the traffic, as does steering that is quick, fluid and free of play.

On a small throttle opening the engine is sweetly refined, just like a regular 203, but it crackles alive under acceleration, with a far-from demure popping-back on the overrun that might be lessened by a bit of tweaking of the mixture. 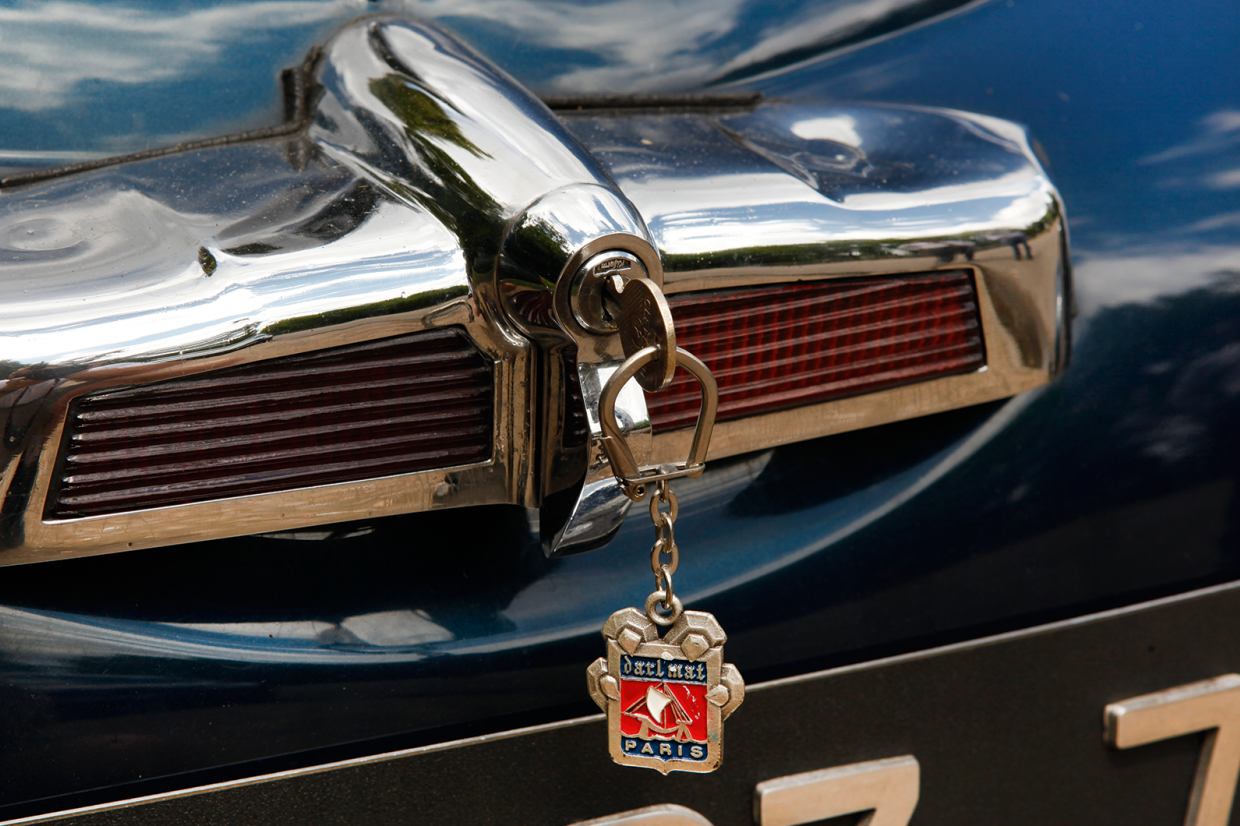 The hole between third and top is typical 203 – these were cars with small engines, yet designed, remember, to cruise happily on France’s routes nationales.

The torque of the enlarged engine bridges the gap, however, and allows easy top-gear performance, with acceleration that simply isn’t there in a regular 1290cc car.

Third, too, becomes an even more usable gear, with deliciously enhanced responses.

Adding to the racy feel, the ride is definitely sharper than on a normal 203, in line with the reduced roll, and in fact is pretty firm – especially for a French car. 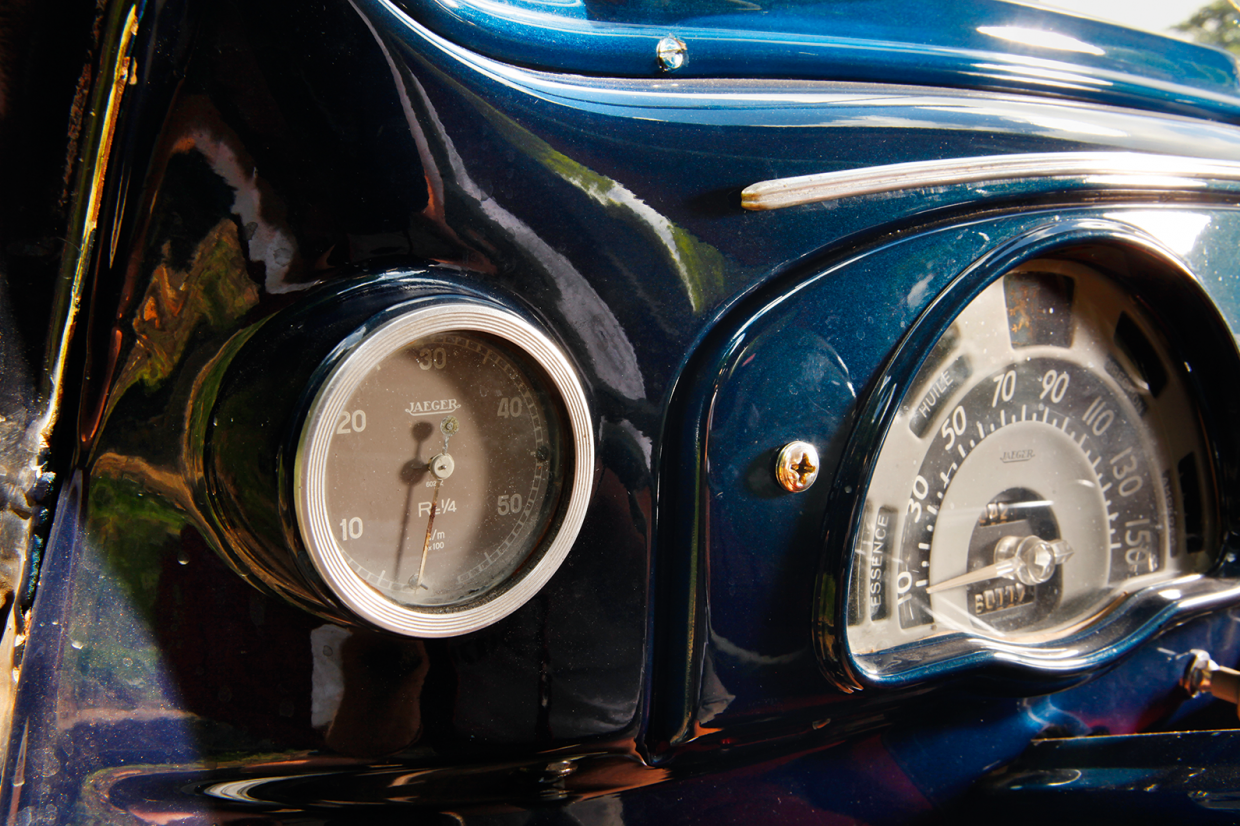 The pod for the tacho is welded into the dashboard

A sports saloon? The 203 has all the credentials. So it should do at the price asked – which must, to a large degree, have been accounted for by the labour-intensive body conversion.

Emile Darl’mat was evidently conscious of this, and offered just an engine upgrade – quoting 54bhp in 1290cc form – to those with shallower pockets.

But he wasn’t seeking to sell large numbers of his special 203, each one of which he himself tested.

They tended to go to discerning and well-heeled clients known to him, such as artist Géo Ham and members of the Martel cognac family, who between them bought three cars. 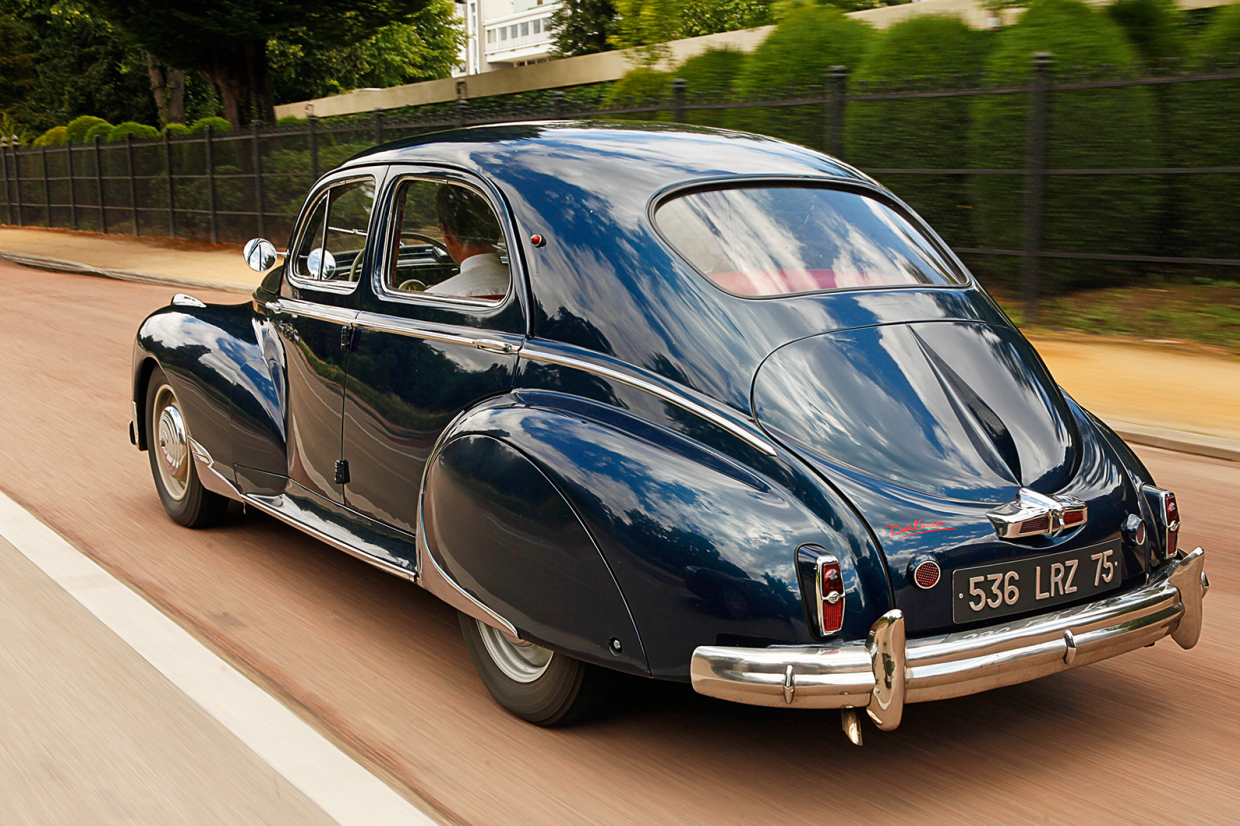 Restrict the transformation to just the mechanicals, and you have the sort of car Peugeot could have produced – a French answer to the Z-type Magnette, maybe.

But Sochaux had its hands full trying to meet demand for new vehicles in a France crying out for cars after the devastation of the war.

With no need for such a diversion, it was happy to support Darl’mat, confident that the result would enhance its standing.

That the 203 Spécial Darl’mat so handsomely met the brief is a reflection on the sure touch of its creator.

This was originally in our January 2012 magazine; all information was correct at the date of original publication 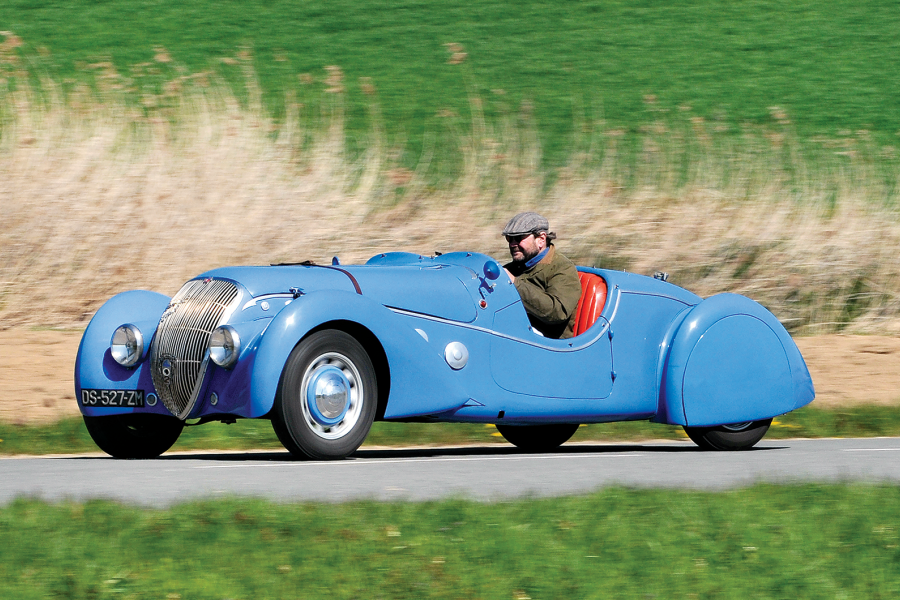 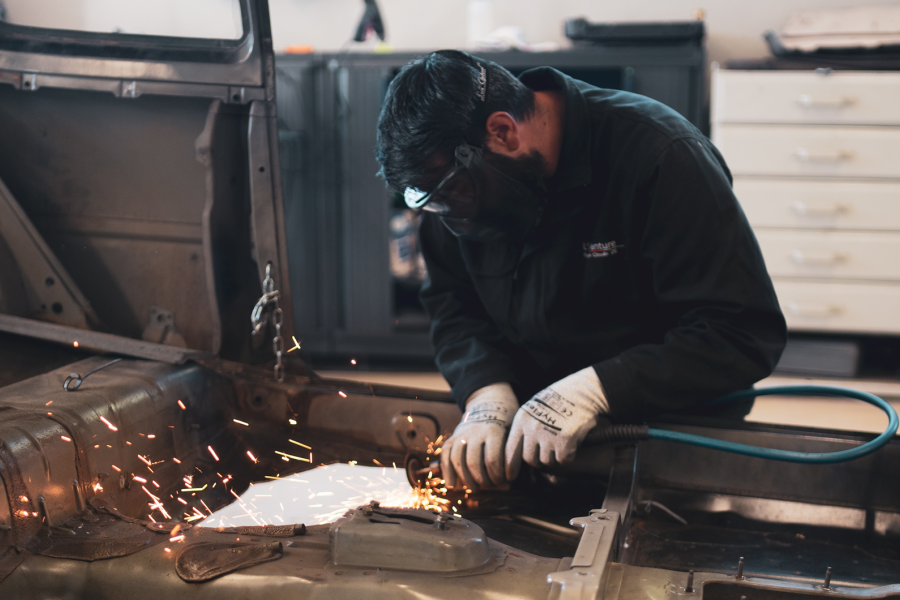 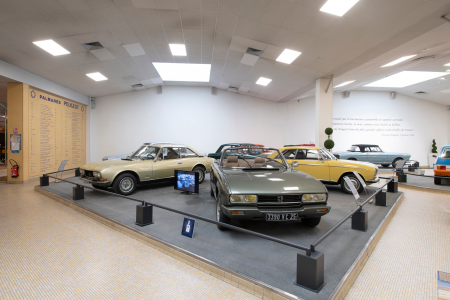 Touring the treasures of Peugeot’s museum 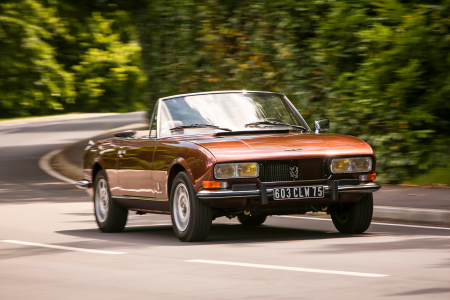