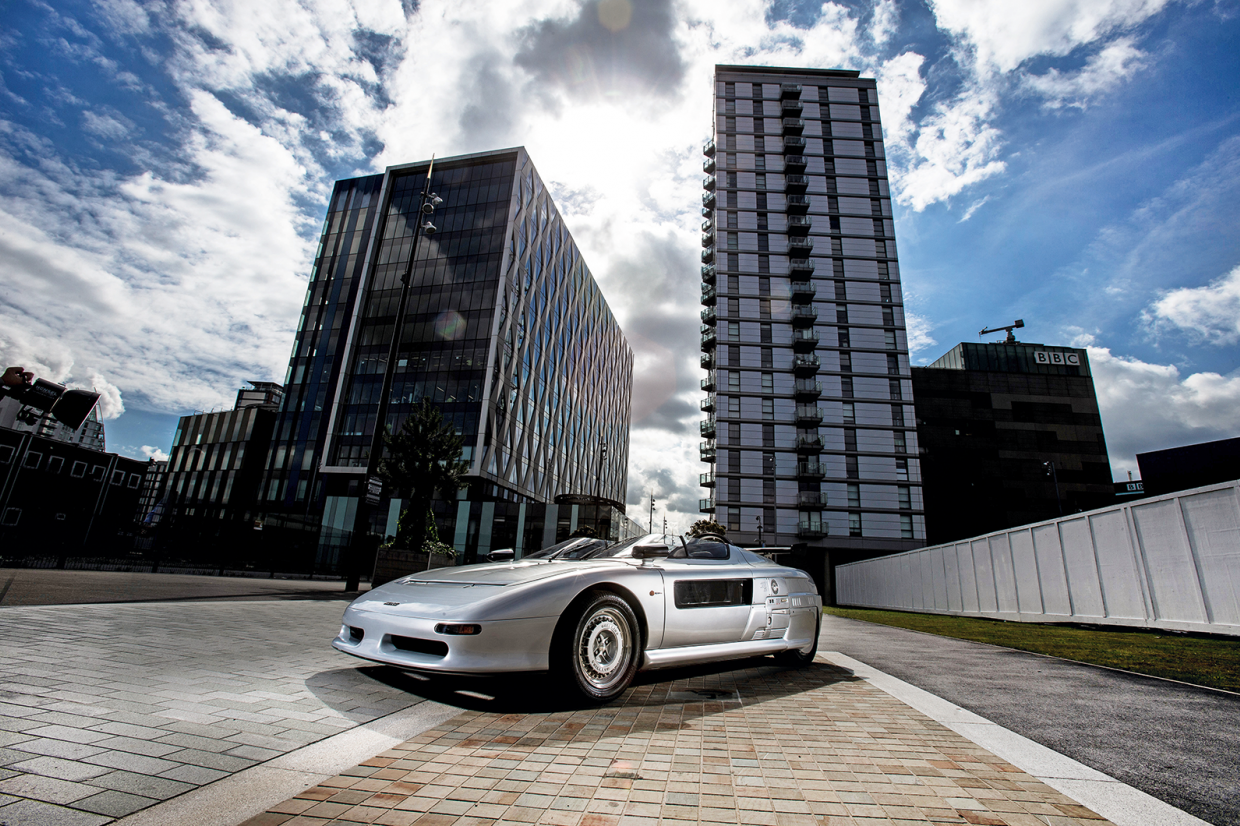 It wasn’t funny the first time. “Where we’re going, we don’t need roads,” proclaims our hero. That would be Back to the Future reference no 67.

Cursing silently, there are fixed grins all round as we bat away further questions and quips from his mates: no, it isn’t a spaceship; no, aliens haven’t invaded Salford; no, you can’t have a go.

And this is just the opening salvo. This isn’t a mere photoshoot any more, it’s an event.

And then, as if by magic, he appears. A ‘creative’ from a nearby PR agency begins holding forth.

He’s spotted the ‘four rings’ insignia down the car’s flanks and claims, without a hint of irony: “Yes, this is the new Audi electric sports car. I didn’t think it was out yet.” It isn’t, and it’s not. Deep breath.

It’s an Italdesign Aztec. It was designed by Giorgetto Giugiaro. It has a Lancia Delta Integrale platform and an Audi petrol engine. It was first seen in 1988. 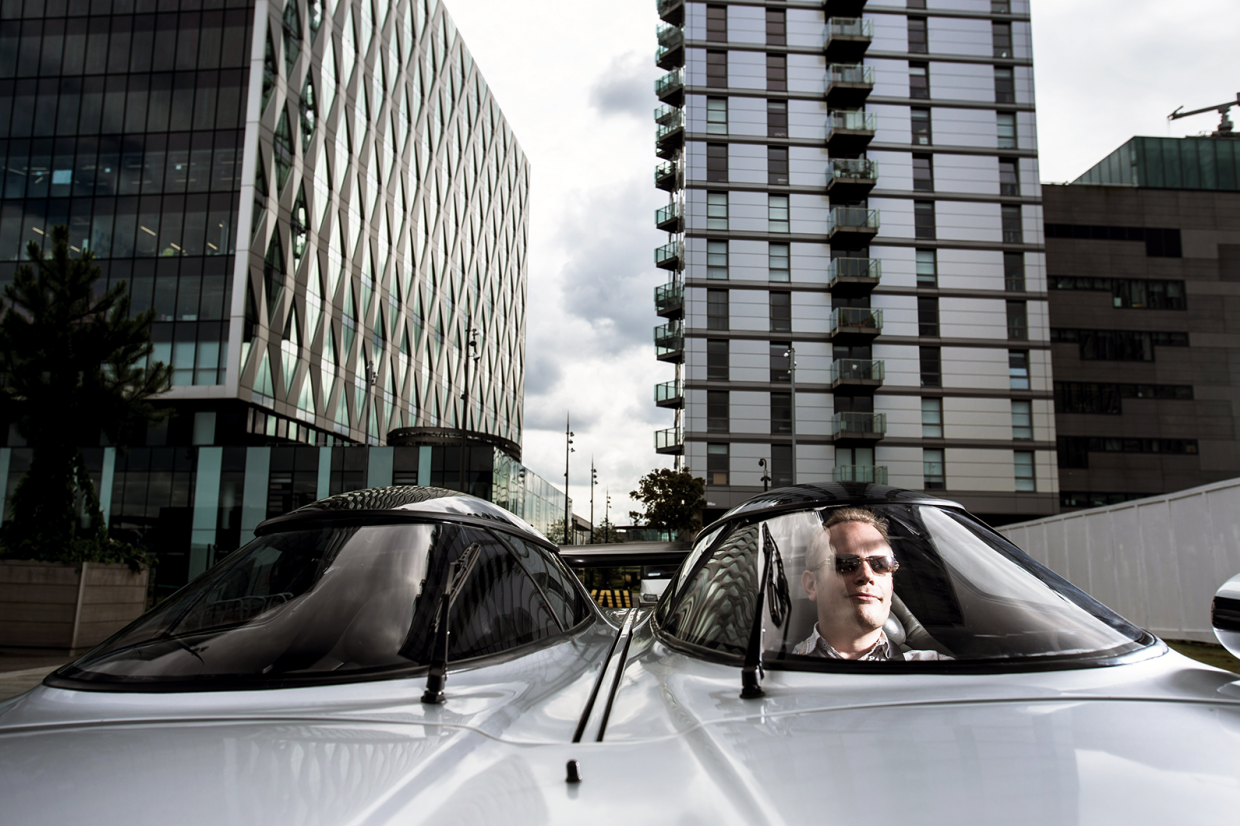 Few classics are imbued with such a sense of occasion as this concept car made production reality.

Fewer still have the ability to shock three decades and more since their inception. But then, according to the man who styled it, the Aztec was conceived in the late ’50s; it simply took a while to reach fruition.

What’s more, it was just one of a family of models that were equally radical in style and reach.

The Aztec was built to honour 20 years of the Torinese styling house, but its signature twin-cockpit arrangement had been on Giugiaro’s mind since his late teens.

While the styling treatment had been seen before, not least on General Motors’ Firebird III dream car of 1958, the brilliant Italian reinterpreted it to winning effect a year later. 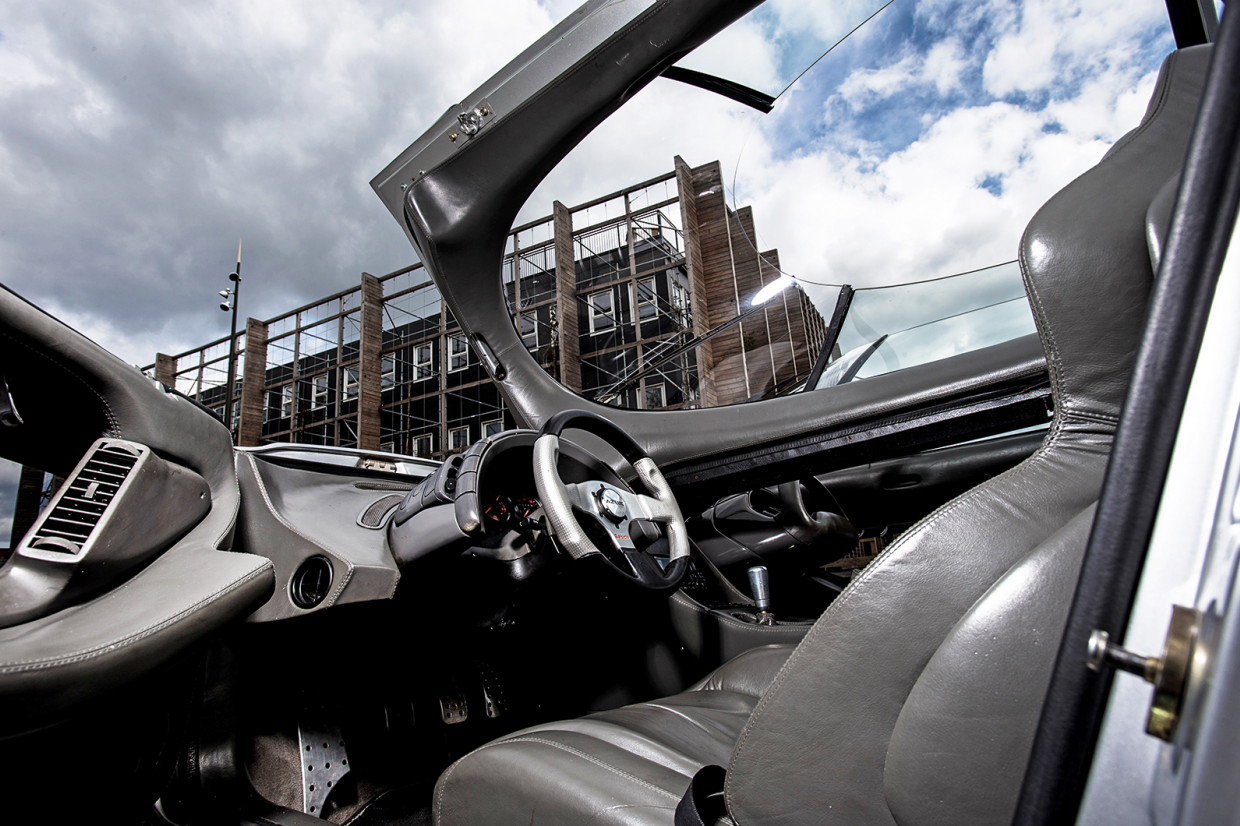 Once you’re in, there is a surprising amount of space inside the Aztec

His ideas for a mid-engined, dual-cowl sports car were put on hold, however, as he embarked on his career at Bertone.

That said, he would subsequently water down his vision a little for the fabulous Testudo concept car of 1963, which in turn influenced everything from the Lamborghini Miura to the Porsche 928.

Fast-forward to the 1988 Turin Motor Show and the Aztec broke cover alongside the fixed-head Aspid coupé and the one-box, 6+2 Asgard people carrier, each sharing the same underpinnings and running gear.

Except only the Aztec was a runner. Powered by a five-cylinder Audi 200 Turbo engine mounted amidships, it represented Giugiaro’s take on how the sports car should evolve.

Reasoning that hot hatches and performance saloons were holding sway over the traditional two-seater roadster, he sought to reinterpret the genre for future generations. 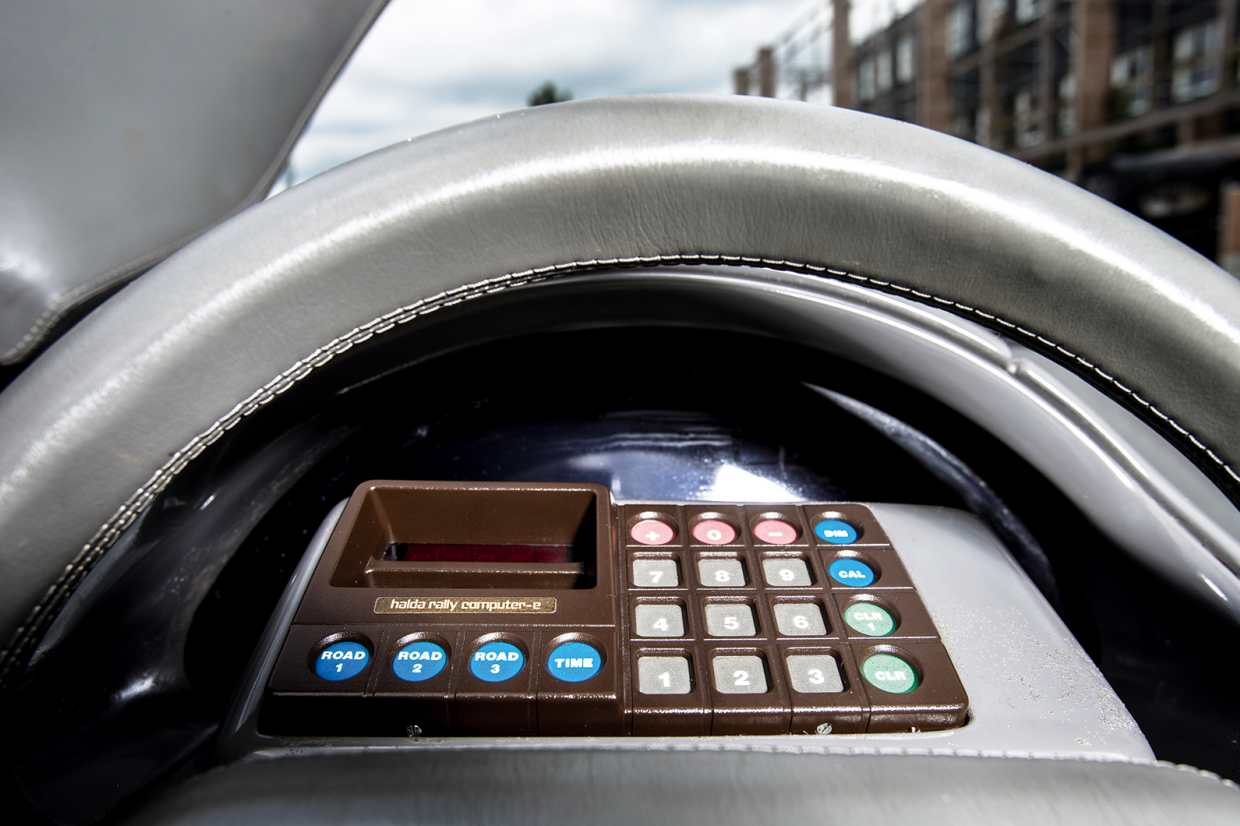 He did just that and more, the Aztec appearing to have wandered off the set of Blade Runner.

It remains unclear if Giugiaro was influenced by the work of Syd Mead, but this appeared to be pure sci-fi theatre. Nothing about the car was conventional, the twin cockpit set-up being just the start of it.

Symmetry was everything: not only did the driver have an array of instruments, the passenger did, too.

Giugiaro stopped short of giving them a steering wheel; he merely provided a grab handle shaped to look like the upper half of one.

If the show car’s controls were to be believed, the Aztec also boasted an electronic route-guidance system with real-time traffic data and local weather information.

This was a time before GPS, remember, so it merely foretold features that we now take for granted – which is the purpose of concept cars, after all. 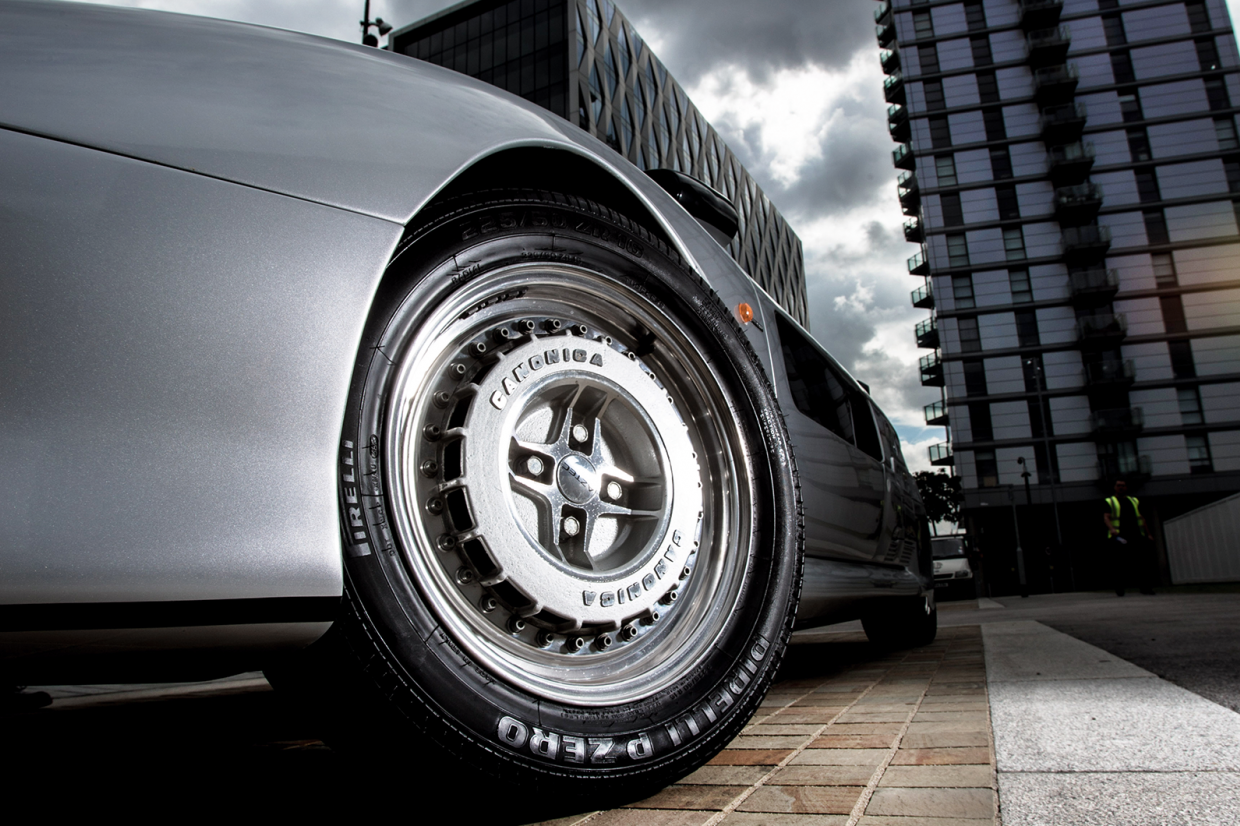 Reaction to the Aztec was mixed, Autocar praising it for the most part while likening its appearance to that of a ‘beached powerboat’.

It would likely have faded into history as just another show queen had it not been for the Japanese Compact concern. It was so taken with the design that it acquired the production rights and announced bold plans to sell a run of more than 200 replicas priced at a cool $300,000 apiece.

It’s at this juncture that the story gets a little hazy.

Unlike most of its rivals, Italdesign didn’t construct cars in volume. It had done so only once before, taking over BMW M1 production after proposed subcontractor Lamborghini underwent one of its customary wobbles. Even then, much of the M1 was farmed out.

Giugiaro wasn’t keen to go down that road again. 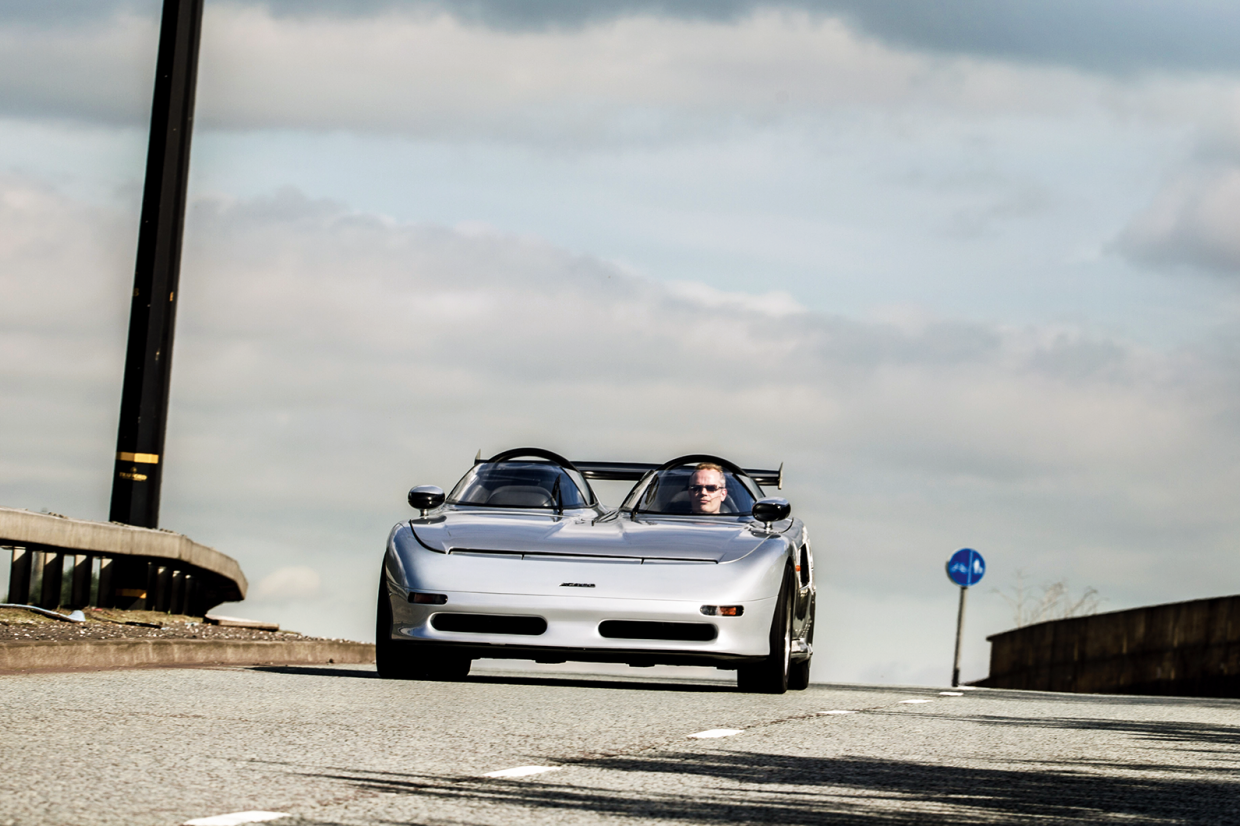 There is still nothing like it on the road

Instead, manufacture became the responsibility of Savio, a firm once well known for its rebodied Fiats but that had since found greater fortune making ambulances and armoured saloons.

The glass/carbonfibre bodies were completed in Italy before being shipped to Audi tuner MTM in Germany, where hopped-up 250bhp quattro engines were installed into the modified Lancia floorpans.

MTM was also tasked with putting the car through a series of rigorous TÜV tests in order to gain full homologation for road use.

As the ’90s dawned, however, sales projections were lowered somewhat.

Just 50 cars would be constructed, the Aztec gaining a promotional boost after it appeared in Roger Corman’s 1990 comeback vehicle Frankenstein Unbound. At least it would have done, had the movie attracted a wider audience; ticket sales flatlined, despite a cast including such greats as John Hurt and Raúl Juliá. And Michael Hutchence.

It was also used as a course car for the ’91 Monaco GP, by which time the asking price was rumoured to have breached the $500,000 barrier. 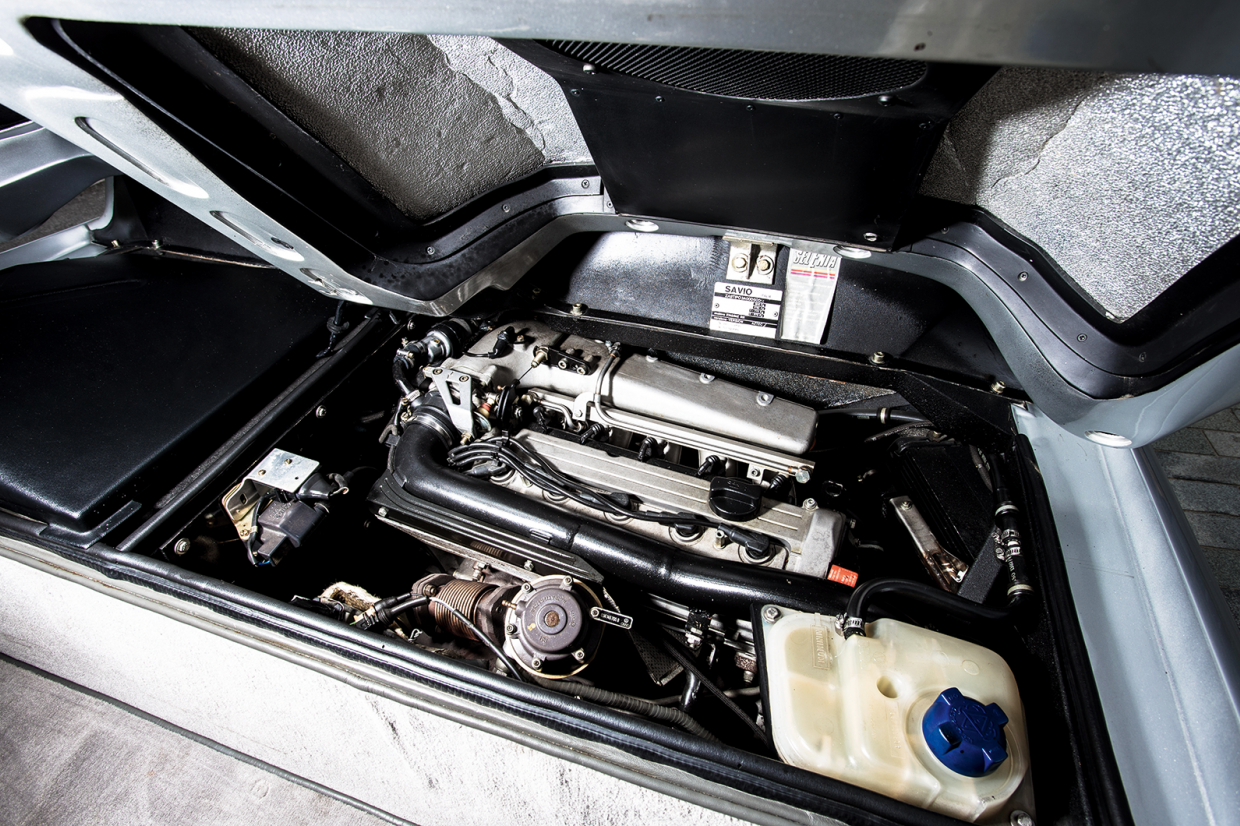 A year later, the Aztec adventure was over. Production figures are unknown, but it’s believed to be somewhere between a dozen and 18 cars, with Giugiaro retaining the prototype in his factory museum.

While the production Aztec was a little less out-there than the Turin show-stopper, the wild styling remained remarkably intact.

Whether that’s a good point depends upon your aesthetic sensibilities, but one thing is for sure – there’s nothing else quite like it.

Once engaged, however, they rise vertically with such theatricality that you almost expect to hear the Thunderbirds theme music playing in the background.

Two finely chiselled swage lines then cut into the bonnet, encompassing the twin cockpits before emerging on the rear deck. 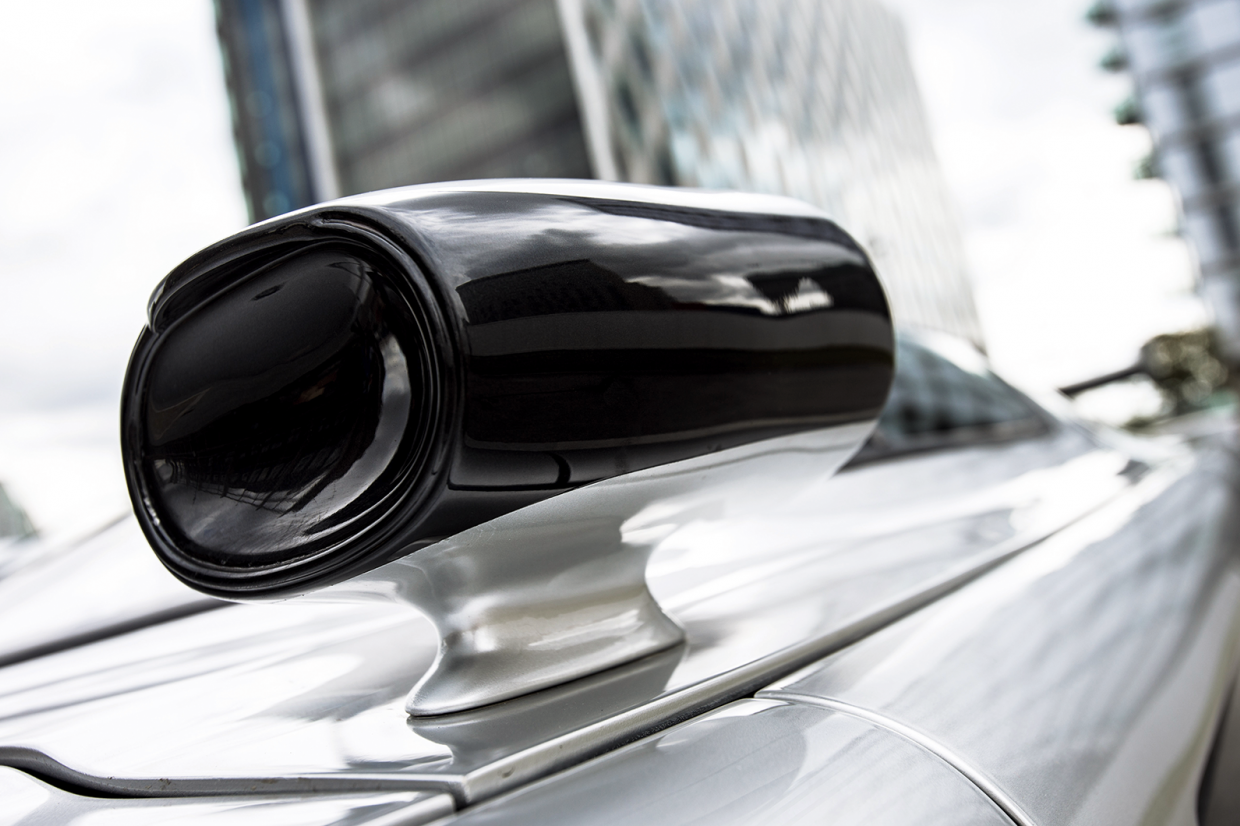 The wing mirrors have a jet-pack look

There are some neat details, not least the darkened Perspex glazing sunk into the doors, which also serve as openings to engine cooling vents.

The wildly curved cowls, meanwhile, also come complete with glass domes that detach with lots of fiddling and plenty of effing and jeffing.

It’s only when you move further back that it really goes crazy-bonkers.

The rear flanks are covered in decals, gauges, buttons and assorted randomness, most of which defies rationality.

Why does it have a manometer, and why is it sited on the outside? What, precisely, does ‘Bolt Driver 233’ mean? Or ‘Suspension Fluid Level 221’? And as for ‘Digital Thermo/Pyrometer’, well, that’s anyone’s guess.

Apparently, each ‘service centre’ is operated by a keypad: type in a particular three-digit combination and you can operate the 12V jack (which doesn’t appear to work); check the air filter’s remaining cleaning capacity (ditto); operate the powered wheelnut spanner (you get the idea).

It’s all nonsense, but brilliant nonetheless. To those of us who are still struggling through puberty, the Aztec puts a wide smile on your face just standing still. 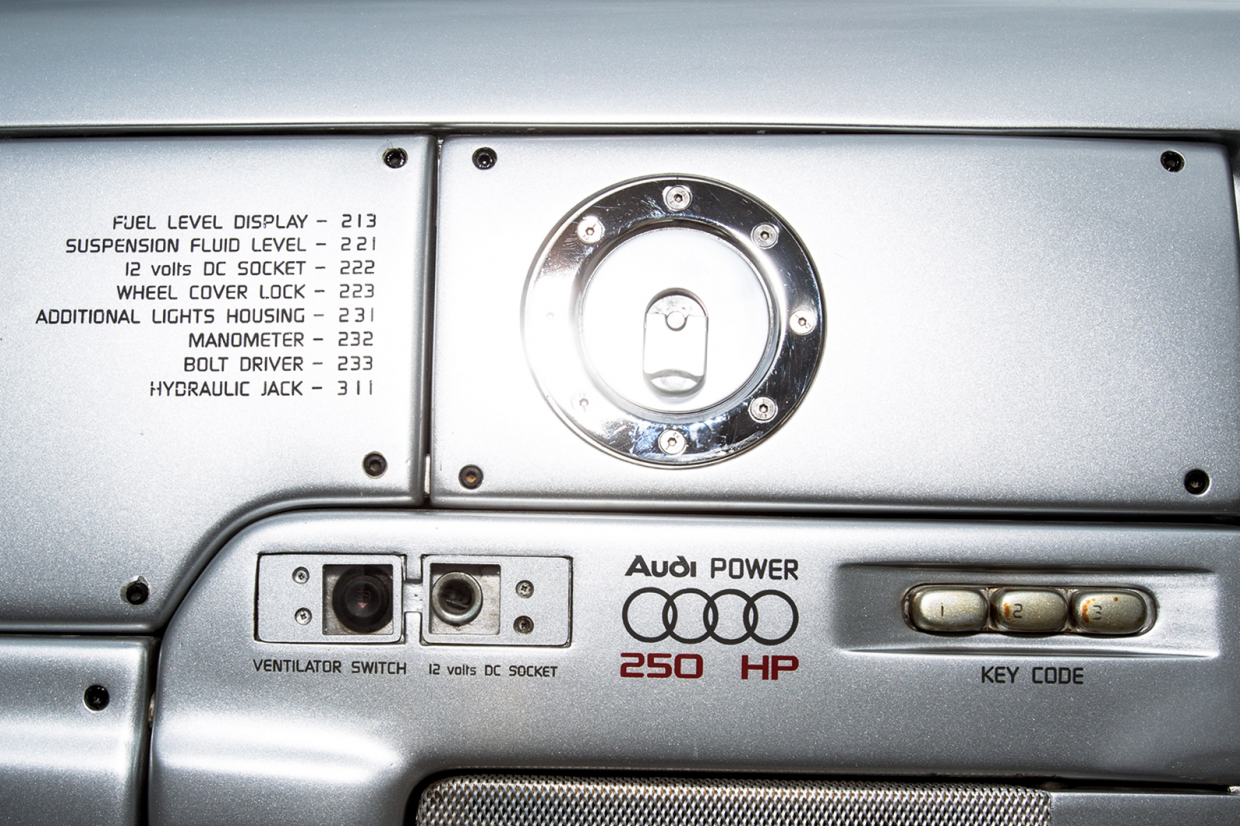 Even more so from inside, but first there’s the small matter of opening the door by a few centimetres to release the lock for the gullwing cowl section.

You’re then obliged to push up the top on a hydraulic ram before fully swinging open the door. It isn’t the most conventional method of entry, but what did you expect?

Once in, and with all the constituent parts back in their rightful places, you can’t help but be struck by the car’s width. At 78in across, it’s as wide as a Ferrari Testarossa.

Same, too, for the Clarion stereo. It’s surprisingly comfy, though, with few of the ergonomic quirks you might expect.

And then you go for a drive. At this juncture it ought to go horribly wrong, fear being the key should you have taken a peek at where the engine is situated beforehand: the five-banger is set crosswise and offset to the right, just behind where the passenger sits.

It looks plain weird, even more so the angle of the driveshafts. This, remember, is in effect a glassfibre-bodied Delta Integrale with an Audi engine in the middle(ish). In no way is this in the realm of normality. 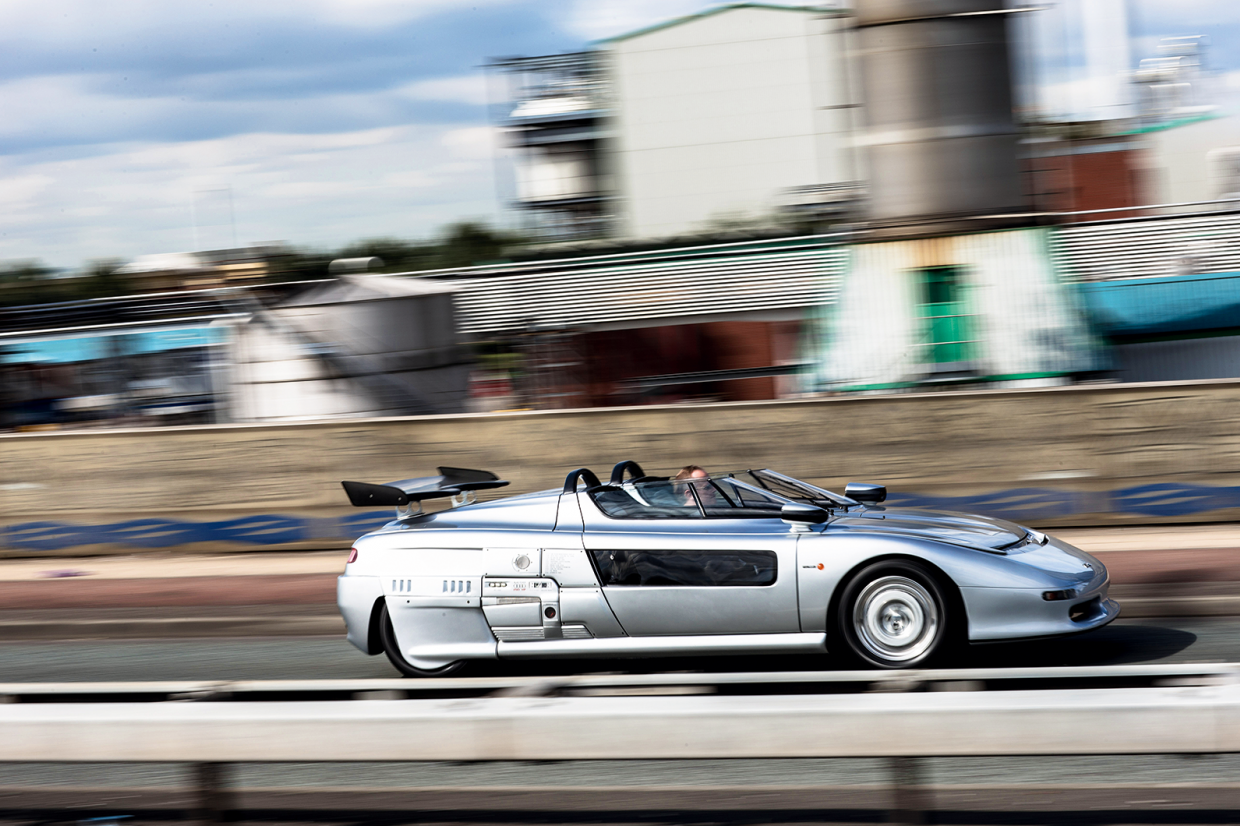 But the Aztec defies preconceptions. You expect it to be like a clown car, with bits flapping about before making a bid for freedom. Instead, it feels properly engineered.

It’s easy to drive: the clutch smooth and progressive; the five-speed ’box easy to guide between planes; the power-assisted steering light at pottering speeds, but becoming increasingly meaty as you gain mph.

And it is disarmingly quick. Not quite in the league of a period Ferrari, but not far behind. Here fast feels fast, too: a sense heightened by the turbo wallop and the fresh air swirling around your face.

What’s more, it doesn’t fall over when you encounter a corner. You anticipate some nasty weight transfer, but it just grips and goes. Even the briefest sortie feels like an adventure.

On the debit side, visibility isn’t its forte. Also, you do feel rather exposed. This isn’t a car for shrinking violets, and you will invariably be heckled by other motorists. “Where’s Gromit?” was a particular favourite. 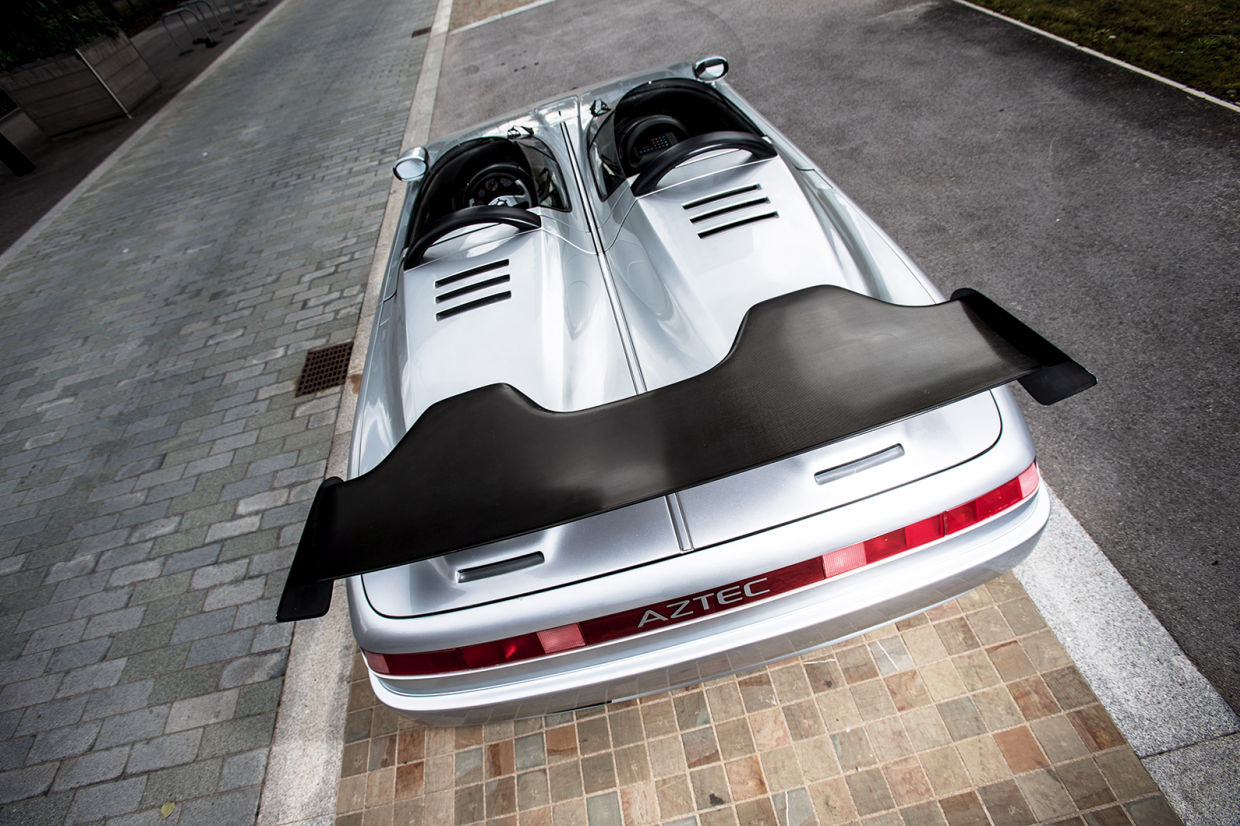 That huge rear wing is mainly for aesthetics

But, if you don’t mind the attention, it’s hard not to fall for the Aztec.

Ownership will likely result in invites to everything from blue-chip concours to Star Trek conventions, but it’s also genuinely usable. There is no reason why you couldn’t use one to commute in.

And you’d be hard pressed to find a car that attracts such an overwhelmingly positive reaction from, well, everyone.

Nothing dates so quickly as a vision of the future but the Aztec remains truly original, which is both a rare and wonderful thing. Quite simply, the madder it gets, the more gripping it becomes.

Thanks to Paul Coombes and Vicky Dredge

20 classic concept cars we wish had been real