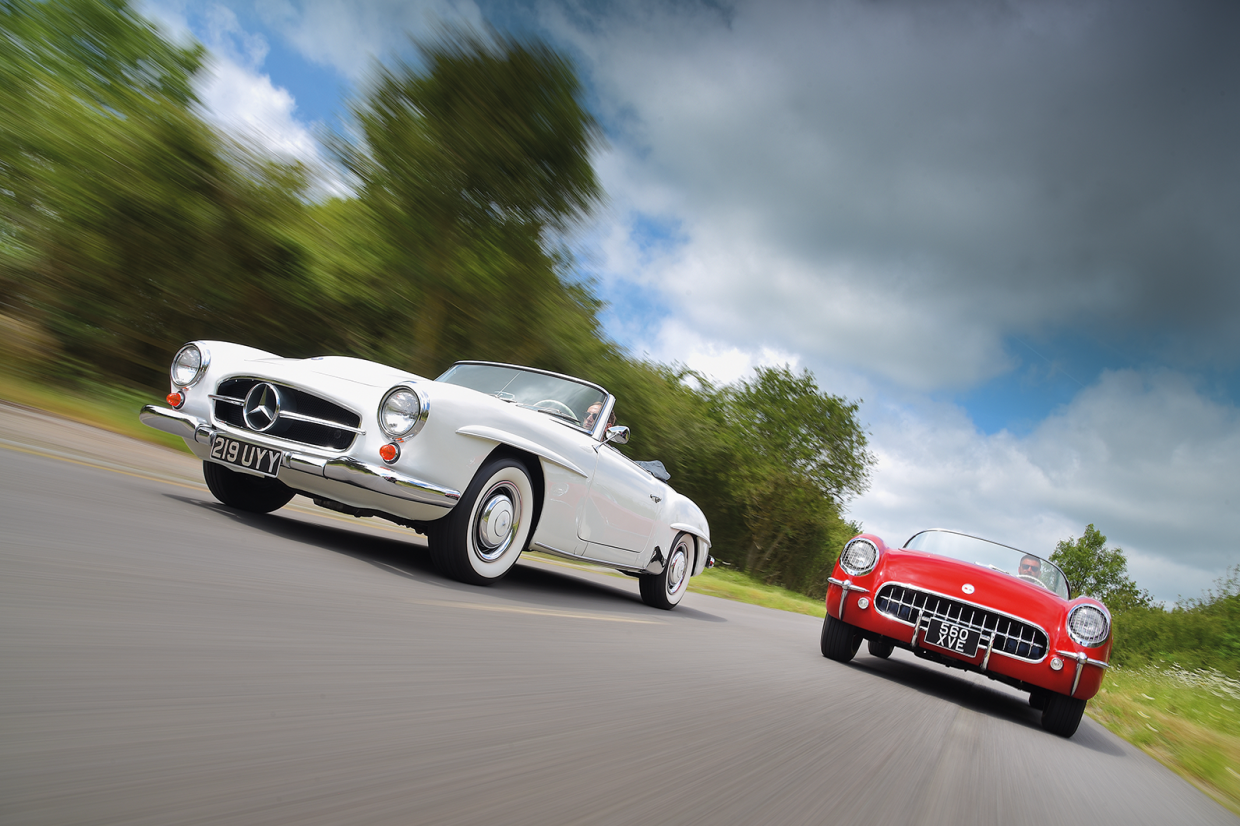 These are sports cars not to be driven quickly, not built to light up the timing sheets.

Your route shouldn’t be rushed when you’re behind the wheel of either, for these are cars created not to get to places quickly, but instead stylishly – as much now as when they were new, six decades ago.

Even in period, the Mercedes-Benz 190SL and Chevrolet Corvette C1 would sometimes find the words sports and car bashfully bracketed by single quotation marks.

Road & Track led its 1954 C1 review with the headline, ‘Is it even a sports car?’ An awkward start to the life of America’s first real attempt at that very thing. 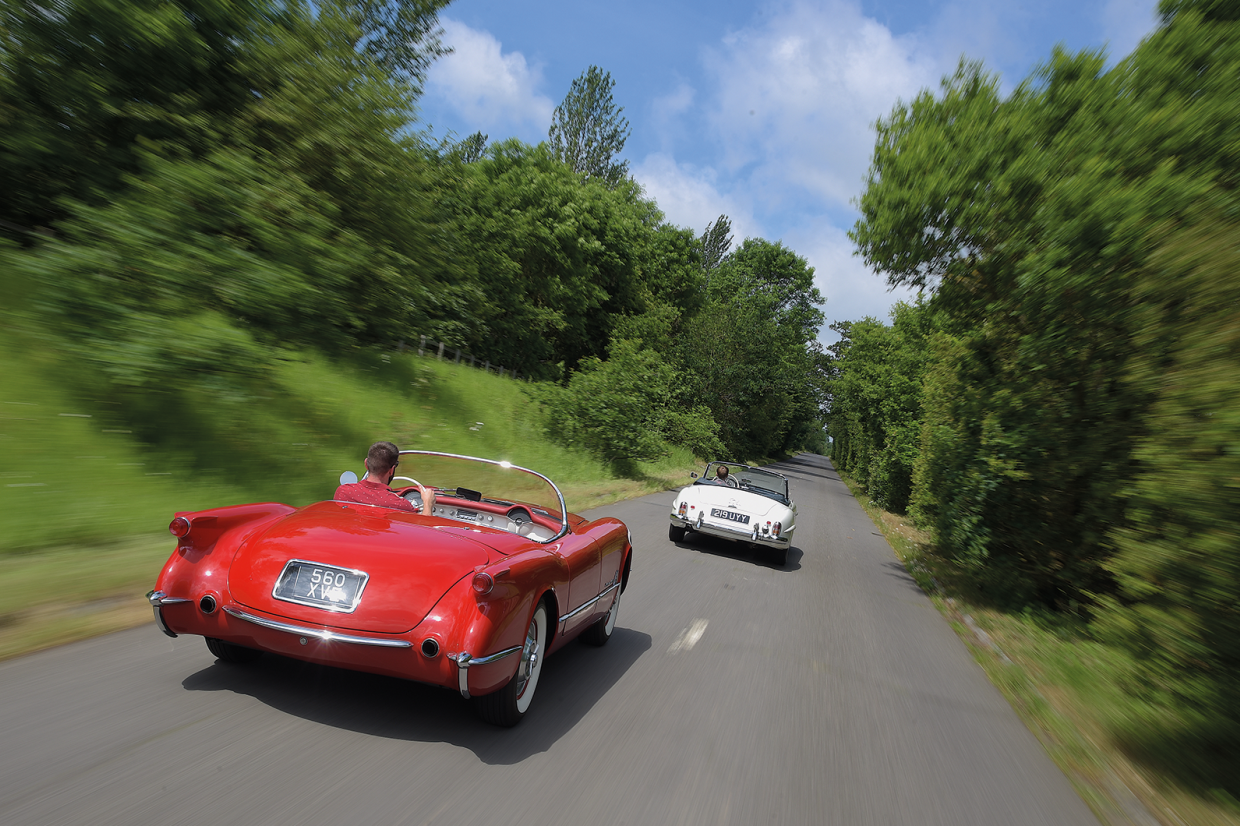 Both are probably more comfortably described as tourers, and it’s there that they flourish.

Picture yourself cruising in the Californian sun and the C1 and 190SL would be challenging for top spot as car of choice.

Yet they are sports cars; they were advertised as such and even found their way onto the odd starting grid.

The C1 played a vital part in the fledgling career of the great Mark Donohue, and a 190SL won the gruelling five-hour Macau Grand Prix for sports cars in the hands of Doug Steane.

But GM said outright that its C1 was not for competition; and for those wanting a Mercedes-made sports-racer, the 300SL was the car of choice – though you could spec your 190 with a Plexiglas single ’screen, and no bumpers or soft-top. Just 17 did exactly that to go racing.

The true aim of the 190 and C1 was to contend with the inadvertent dominance of British sports cars in the USA. 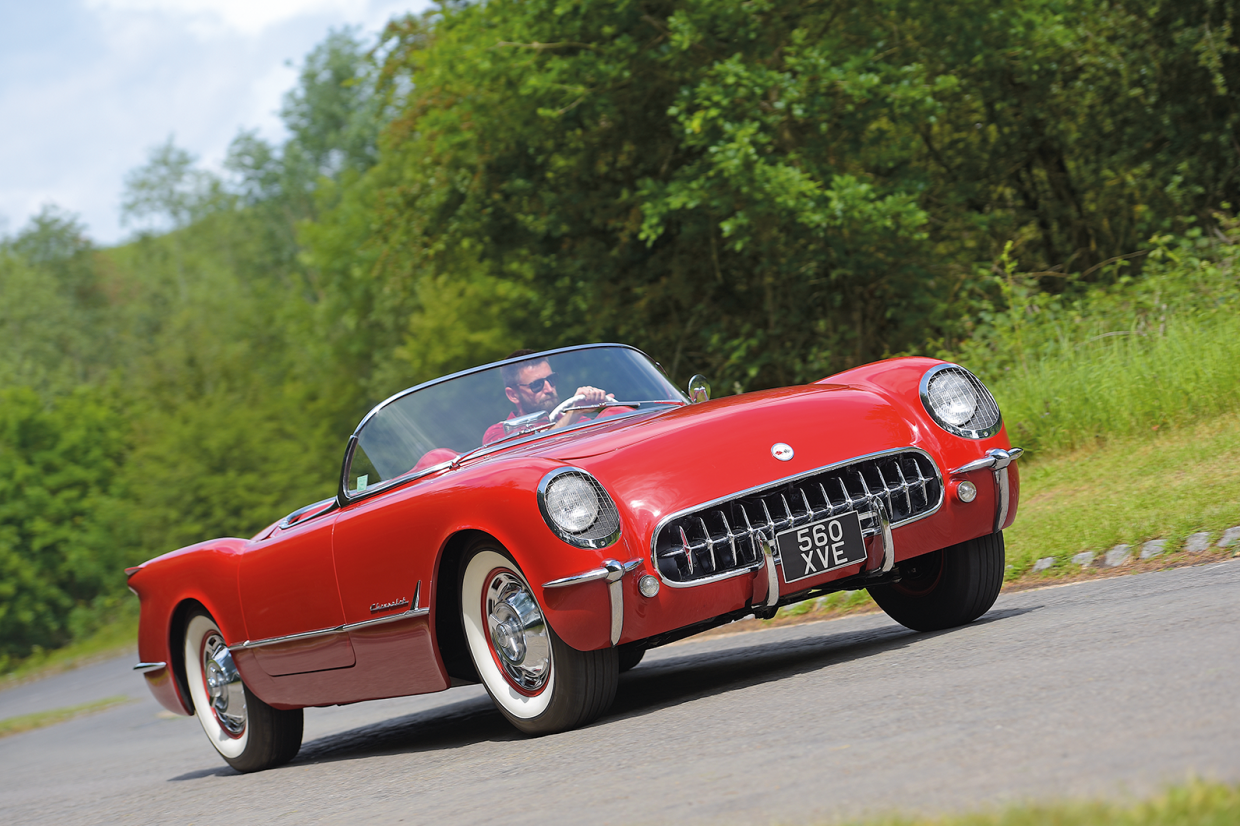 The Jaguar XK120 had followed the T-series MGs in breaking America and two locals – a dealer and a marque – wanted to reclaim their patch.

GM’s Corvette came first, named after a small warship and rushed out the door ready for 1953.

A model made of plaster was paraded in front of its staff in June 1952 and the flag dropped: the car was to be unveiled the following January.

Its power initially would come from the old 3.9-litre ‘six’ – as it does here, in DD Classics’ rare early C1 from 1954 – parts would be stock from Chevy sedans, its wheelbase should be short and its overhanging bodywork minimal.

Its engine’s ancestry dates to before WW2, the last ‘Blue Flame’ variant the final development of its 1929 straight-six first used in the Series AC International. 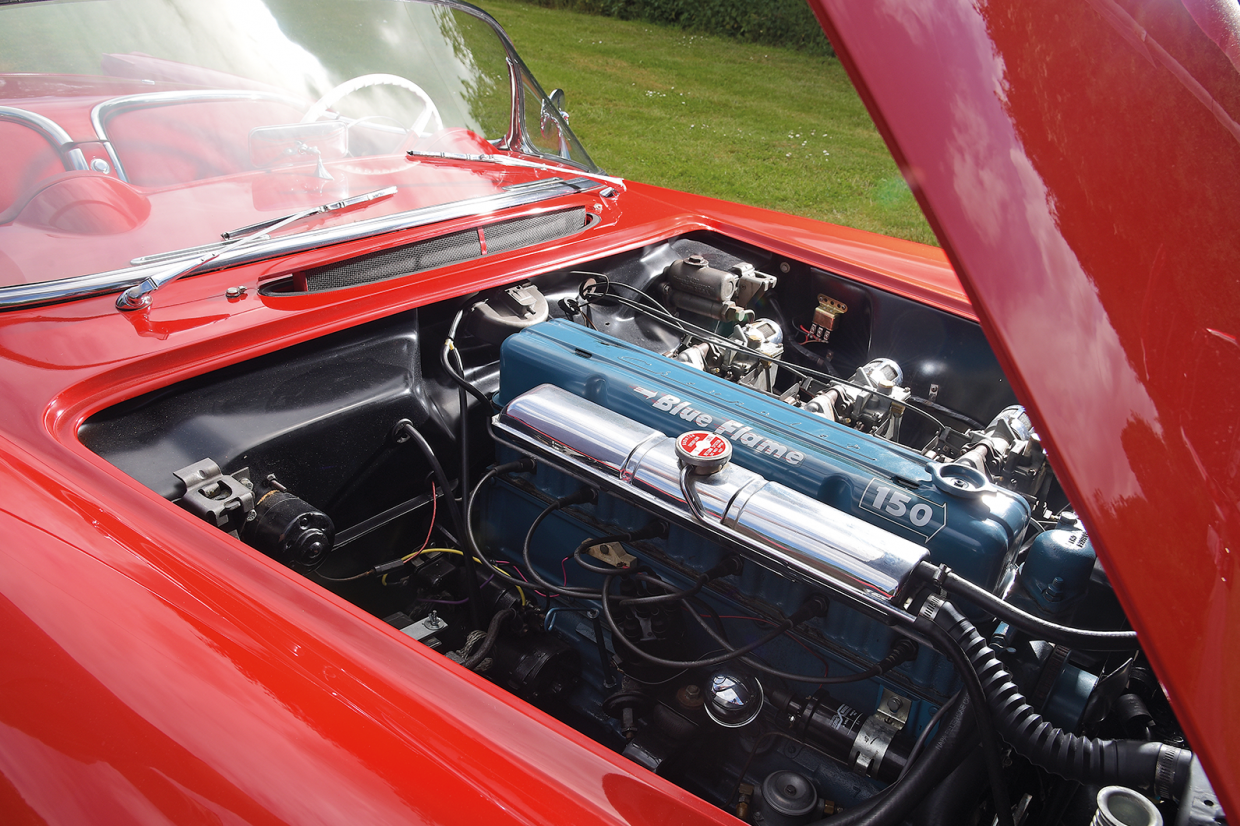 Remarkably, 25 years later it was spearheading Chevrolet’s move into the sports car market and in the front of the halo model.

It sounds glorious, a deep rumble that needs no introduction or second invitation to make itself heard. It’s oh-so American, too.

The Blue Flame, a name dreamed up by the marketing department and splashed across the blue rocker cover in silver script, was phased out in favour of Chevrolet’s shiny new and much less blue V8 in 1956, which pushed up output from 150bhp to 195bhp and changed the 0-60mph amble into more of a sprint – the target was reached in 8.7 secs rather than a sluggish 11.

Chevrolet’s three-year-old Powerglide transmission came as standard, a two-speed auto that clunks into Drive with a jolt before the ‘six’ pulls and pulls along its rev range, roaring warmly. 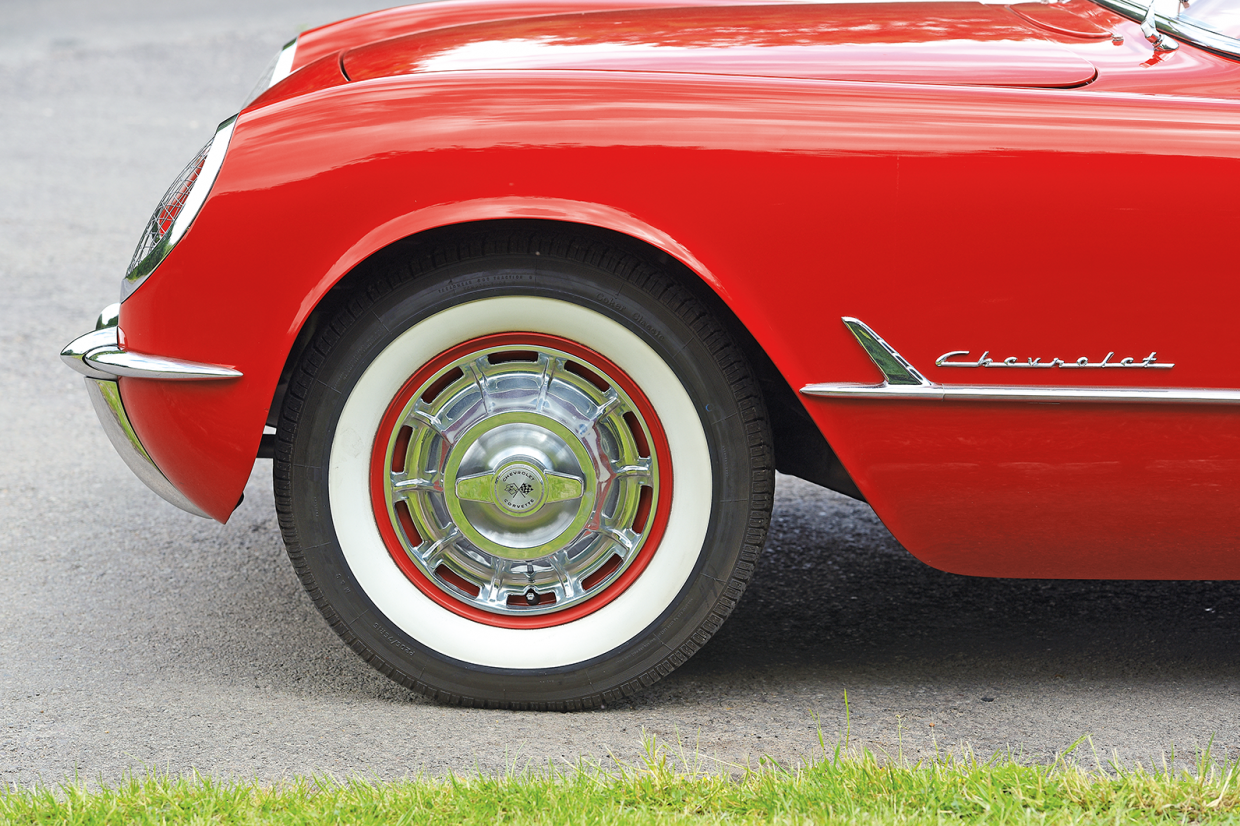 Its easy torque further reinforces that this is a long-distance tourer rather than a rubber-burning, corner-consuming sports car. You simply get in and go, stopping only and often to fill up.

At GM’s Motorama event in 1953, a spinning platform showcased the new Corvette with a dashing courting couple sitting behind the wonderfully curved windscreen.

The sense was that this scene, a curly bob-haired woman leaning her head on the shoulder of her own Clark Gable, could have been anywhere: they could have been cruising along a highway, rolling down a boulevard, or sitting at the drive-in flicks

This was a car of comfort and of style, whether the wind was rushing through your hair or not – which it really would, because weather protection was barely an afterthought.

No sidescreens, and that low, sculpted ’screen means the weather has few on-the-way defences to breach. 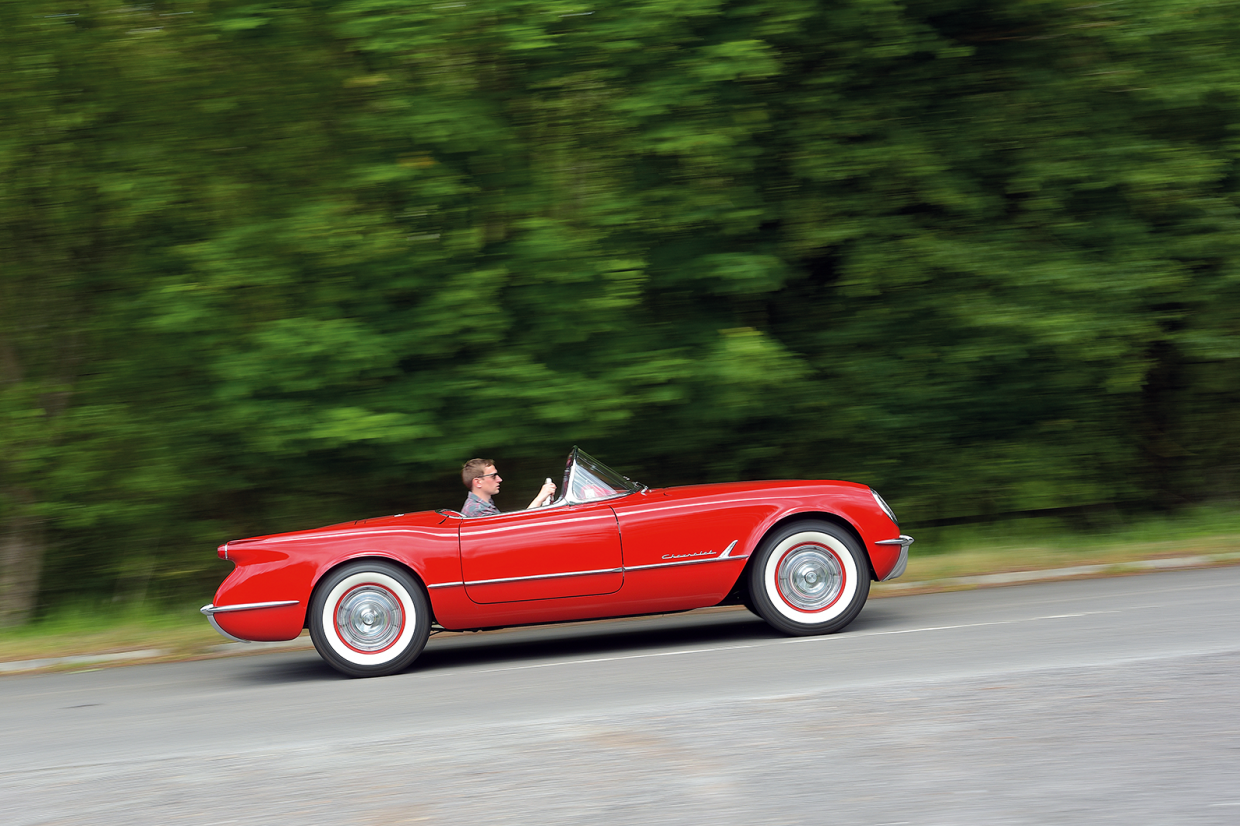 While the Corvette was spinning slowly and enticingly away on stage and in showrooms, Mercedes-Benz had been rather more proactive.

Its W198 300SL had already won races the world over, from Hermann Lang and Fritz Riess leading a three-pointed-star 1-2 at Le Mans in 1952 to Karl Kling doing likewise on the deadly Mexican Carrera Panamericana road race.

Yet the 300SL was a thoroughbred racer for professional guns only; it wasn’t until Austrian-born, US-based businessman Max Hoffman made his opinions felt that the car ventured near the clutches of the average American Joe.

And so in 1954, in New York, the SLs were launched to the world’s surprise. Not at the 300 – its performances made it world famous and its launch expected – but the junior sports car that had snuck under the radar. 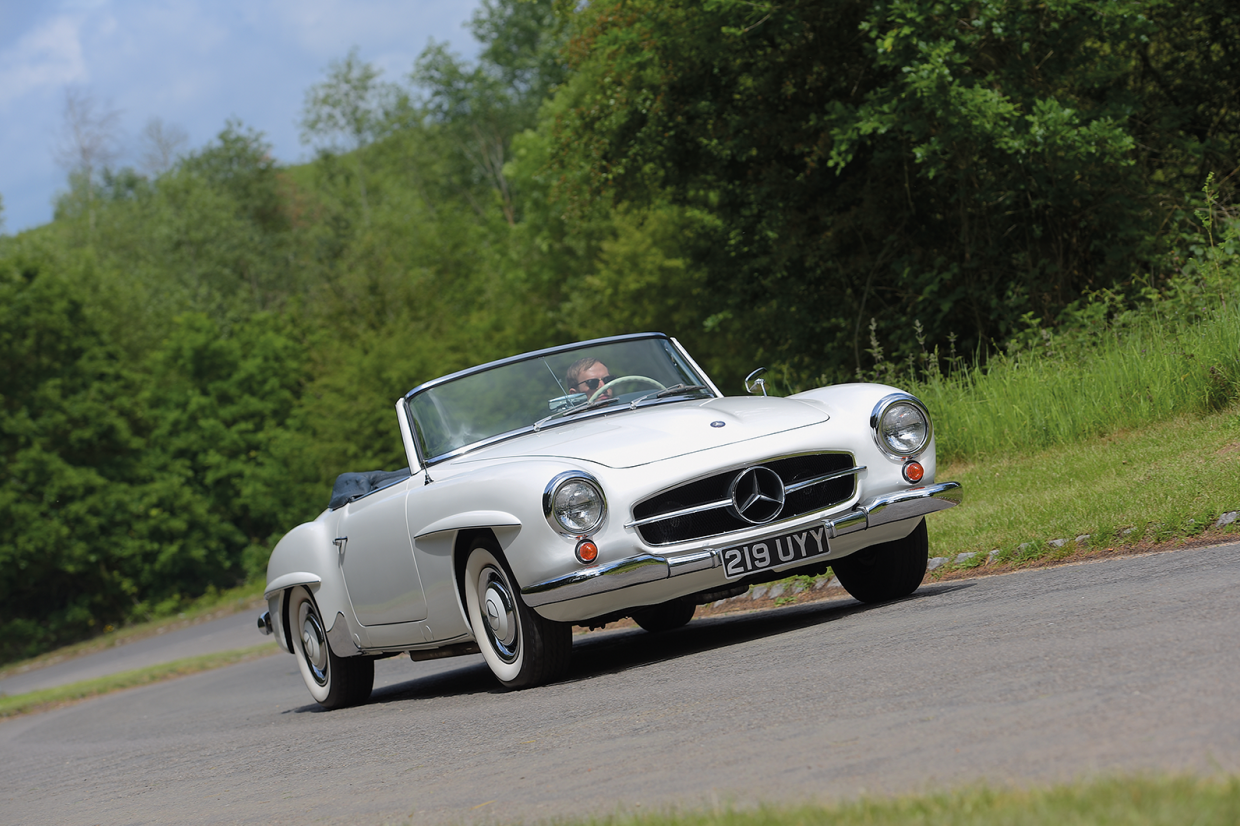 Beneath the 300-inspired bodywork was a shortened floorpan from the Mercedes ‘Ponton’ saloon, but a wheelbase that matched that of the 300.

Under the carefully humped bonnet, meanwhile, was a first for Mercedes: an 1897cc overhead-cam four-pot with two side-draught Solex carbs, derived from the 220’s ‘six’ and good for a mere 105bhp.

Thoughts of using the 300’s unit were quickly scrapped, though the two engines shared an 85mm bore.

The ‘four’ had a shorter stroke than the 300, and its all-synchro four-speed ’box was out of the Ponton.

Once the Daimler board had finally been persuaded to put the two SLs into production with a planned launch in 1955, Mercedes’ speed of development bettered even that of Chevrolet – the model was signed off in September of 1953 and the big concept reveal at the Third Annual New York Motor Sports Show was the following February. 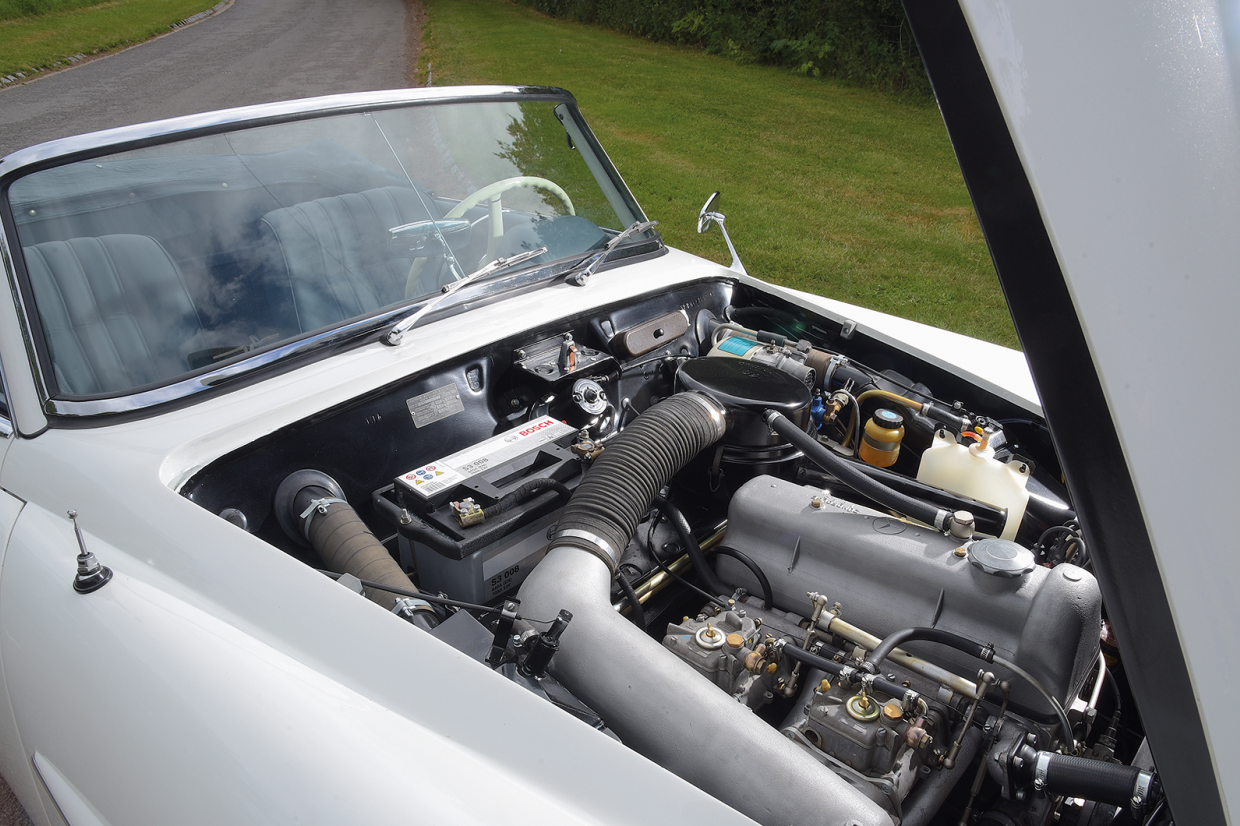 All-round independent suspension (unlike the C1’s independent front end only) made use of the Ponton’s ‘support bridge’ at the front that included double wishbones, matched to a low-pivot swing-axle rear. It blurred the line between supercar Mercedes and super Mercedes car.

Revs rise freely, which can make the SL feel fussy, needing a busy hand between gears that prefer a delicate touch to slip through the gate.

The throttle is light, unlike the Corvette’s big, board-like slab that equals the brute of its noise.

The Merc is monstered by the ’Vette for sheer theatre in that respect; the German is instead more refined, sending its soundtrack through one long exhaust branch peering out the back. 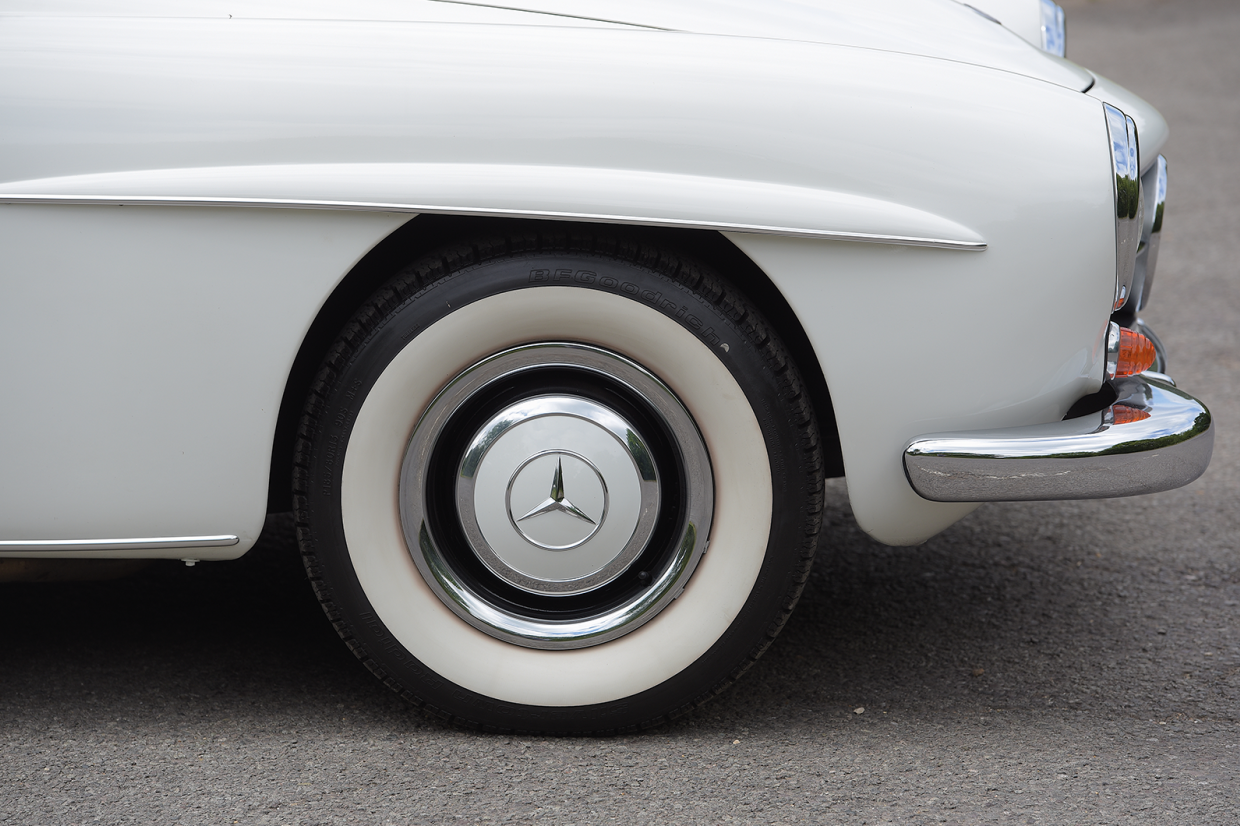 The SL wears classy but simple 13in wheeltrims

There is certainly more of a luxurious air to the Mercedes, reflecting its Hollywood pretentions. Yet pretentious it’s not.

The interior of this very original car, which has been in the family of DD Classics owner Danny Donovan for more than 30 years and avoided the rusty fate of many SLs, is a deep blue that contrasts perfectly with the ivory exterior and dash.

The crisp metal is home to VDO dials, taking the understated approach in comparison to the vibrancy and shout-out-loud red and white of the ’Vette.

In its American counterpart, a vast speaker eyes the passenger in a swooping dashboard – all shiny-rimmed dials and buttons, humps and curves – trimmed with a red leather padding. 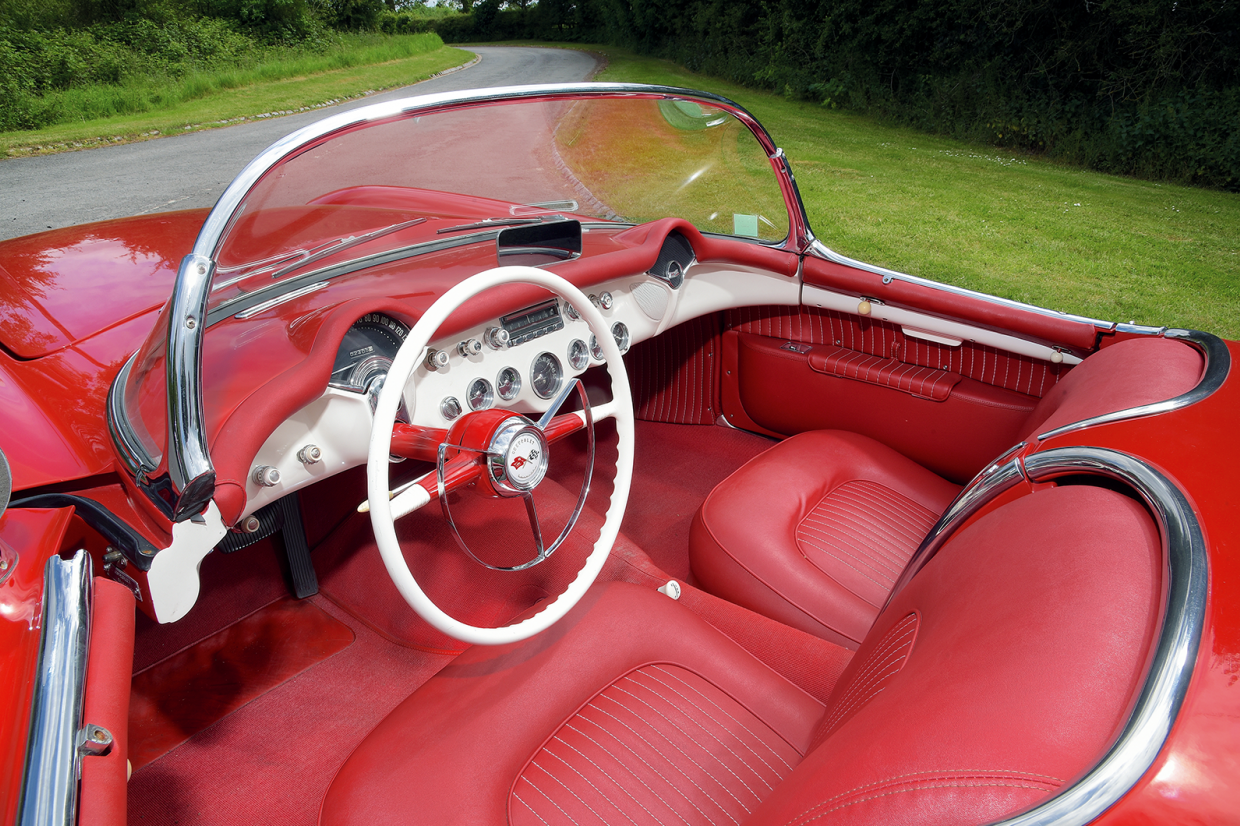 Striking interior evokes the ’50s era, and the symmetrical dashboard is unmistakably American

You rather slide into the Corvette, initially wondering how the small gap between the large steering wheel and seat could accommodate a leg.

The big, padded rump of the seat gives way for you to slip beneath, the white, smooth wheel feeling wide and close but comfortable enough.

Leaning out of the bright red floor is the long auto gear selector, offering ‘Low’ and ‘Drive’, its diagram on top more a rough approximation of where the stick should be than a definitive map.

The ’Vette is more taxing and it takes a heave at low speed, unlike the lighter 190. The C1 demands a full lean on its big wheel, but it is progressive as it wallows around.

Both require some planning ahead when it comes to slowing down, though the distances shorten when warm. 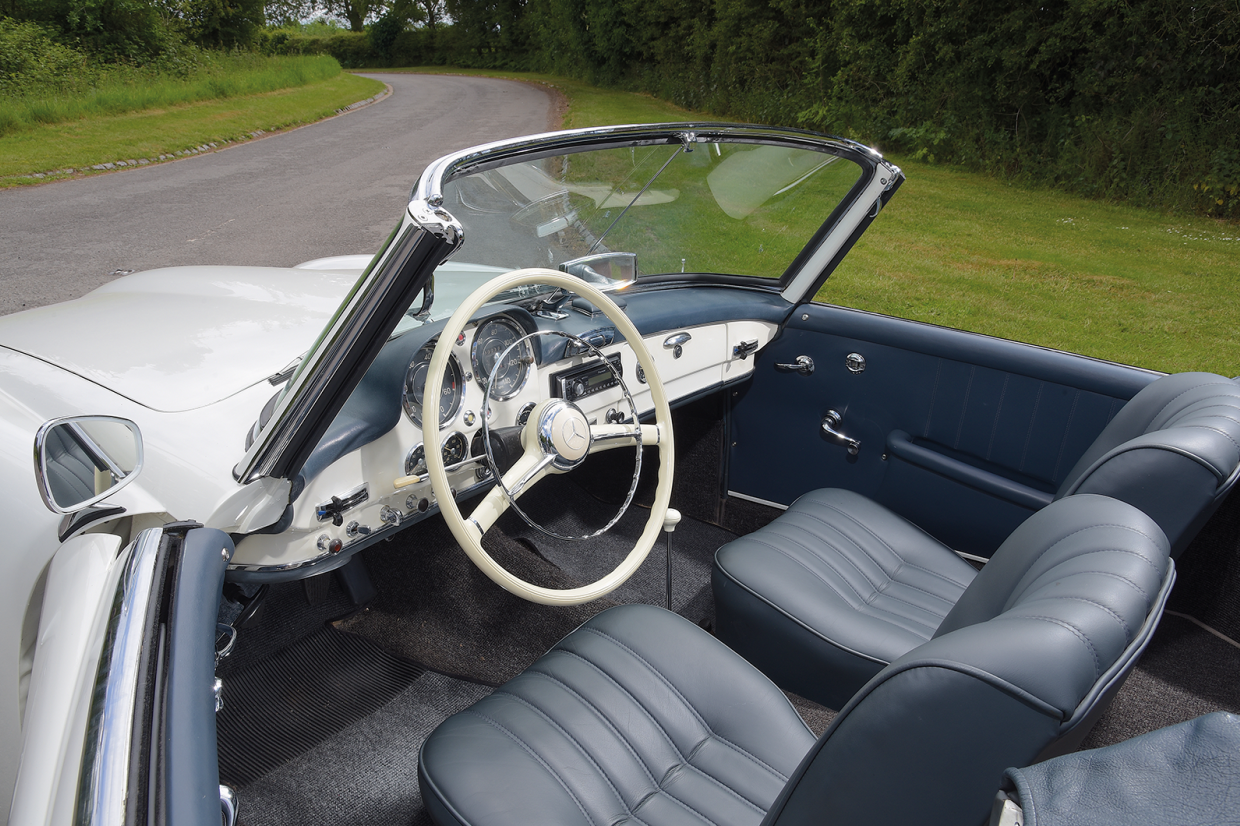 The deeper Merc cabin allows you to step in and drop into the similarly sporty seat.

The wheel is higher, but no smaller. ‘For a person of average height,’ wrote Autocar in 1958, ‘the top of the steering wheel is in the line of vision. A short person may find it necessary to look through the wheel at times.’ Quite.

Beneath the rim and strip of visible road is the large rev counter and speedo, making for a cluttered view.

The ’Vette being such an early example, its scalloped sides have yet to be; it’s a pill shape that swells at the edges.

The doorhandles are inside, a short stump that clings to the upper part of the inside of the door with a small cueball on its end. 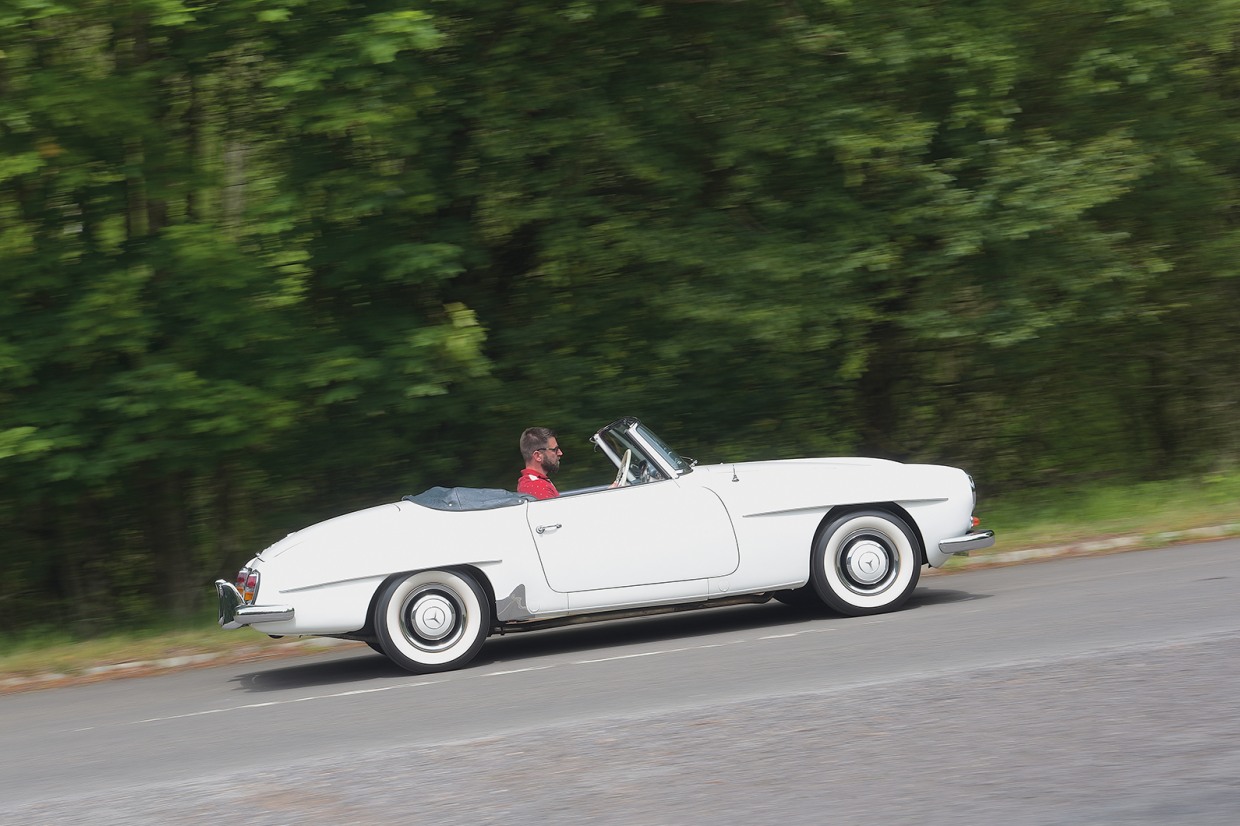 The Mercedes is more shapely and sculpted, more obviously stylish with eyebrows looming above each wheel in a nod to its big brother 300.

The SL’s tail slopes along, down and then away to chrome overhangs and a long boot, where the Corvette turns fully ’50s Americana. Two missiles appear to have landed unexploded into the wingtips, carrying the brake-light-cum-indicators.

Those touches disappeared when the sides gained their cutouts, and the lights regressed into the rear bodywork. Not unlike the exhausts, in fact, which nestle relatively high up.

As dictated by Chevrolet’s head of research and development, the Rolls-Royce trained Maurice Olley, and in search of a low centre of gravity and inertia, minimal body overhangs give the Corvette a stout face compared to the almost sharknose of the squat Mercedes. 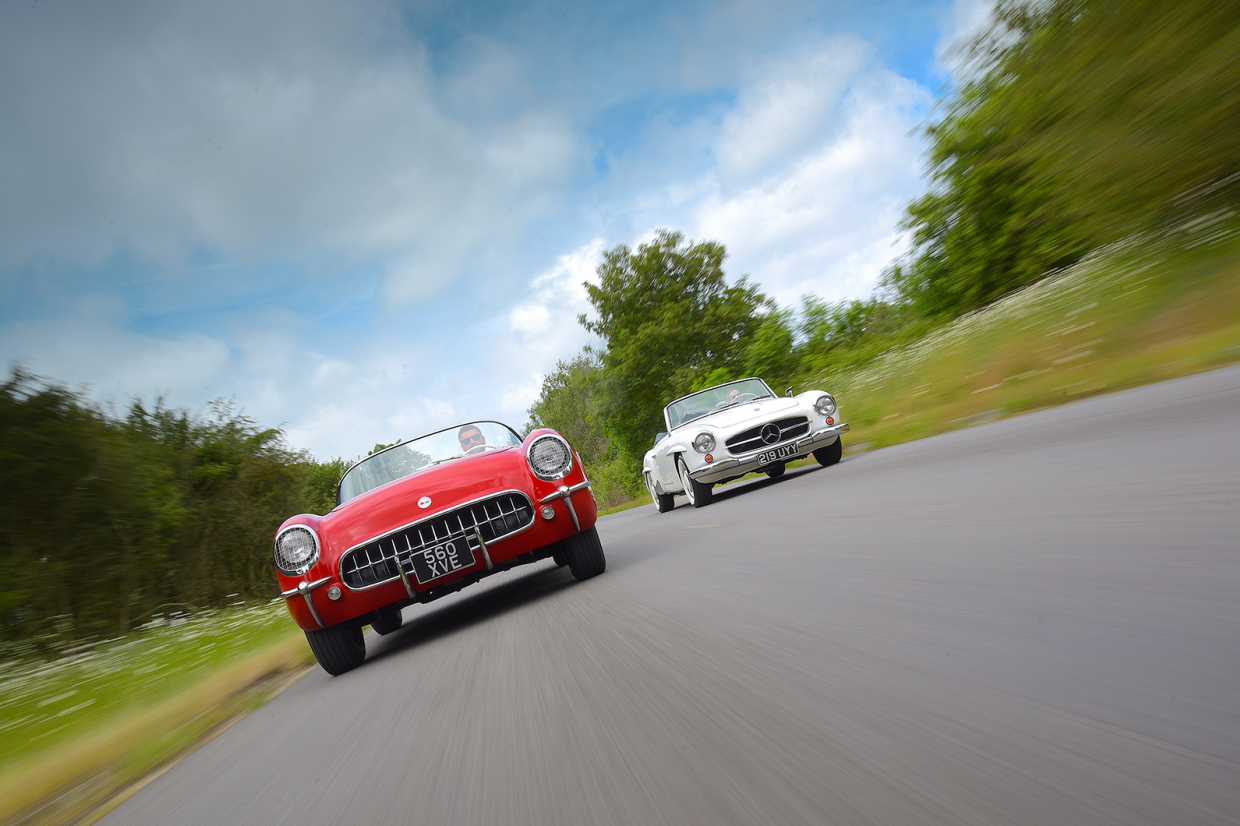 Both are more easy cruisers than out-and-out sports cars

The 190SL looks classically beautiful cruising along country lanes, small but somehow wide, and would be a dream on those quiet afternoon drives, sunlight fading with the low sun.

The Corvette, meanwhile, feels more like the boulevardier it is, rumbling along comfortably rather than nipping through lanes.

It’s hard not to drift off and dream of West Coast roads, going nowhere in particular in no particular hurry.

It’s also the bigger draw of the two, with families stopping in their tracks to point at and ogle this bright, brash American, and other drivers tipping their imaginary hats.

It’s the Hollywood effect: while the Merc had its own list of stars, the ’Vette had ‘The Duke’ John Wayne. 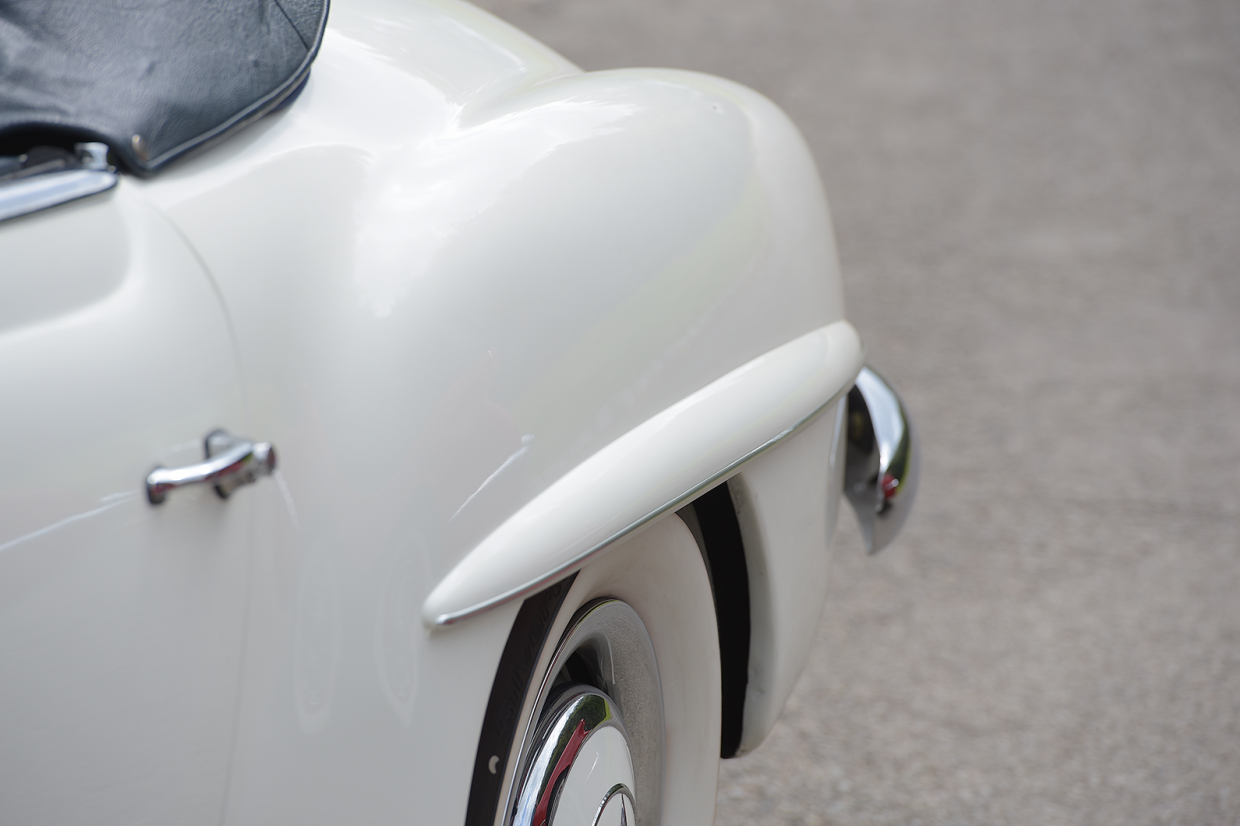 Wheelarch details echo those on the 300SL

Both cars have always been rare on UK roads. Production of the C1 was slow: 300 were made that first year, a little more than 3000 the year after – including this Sportsman Red example.

But that was exactly the point: the 190 was to be the 300SL that the common man could own, not least in the boom of post-war America.

You suspect that all misgivings would soon be put aside when you’re on the open road, though, and you’d forgive these two anything. 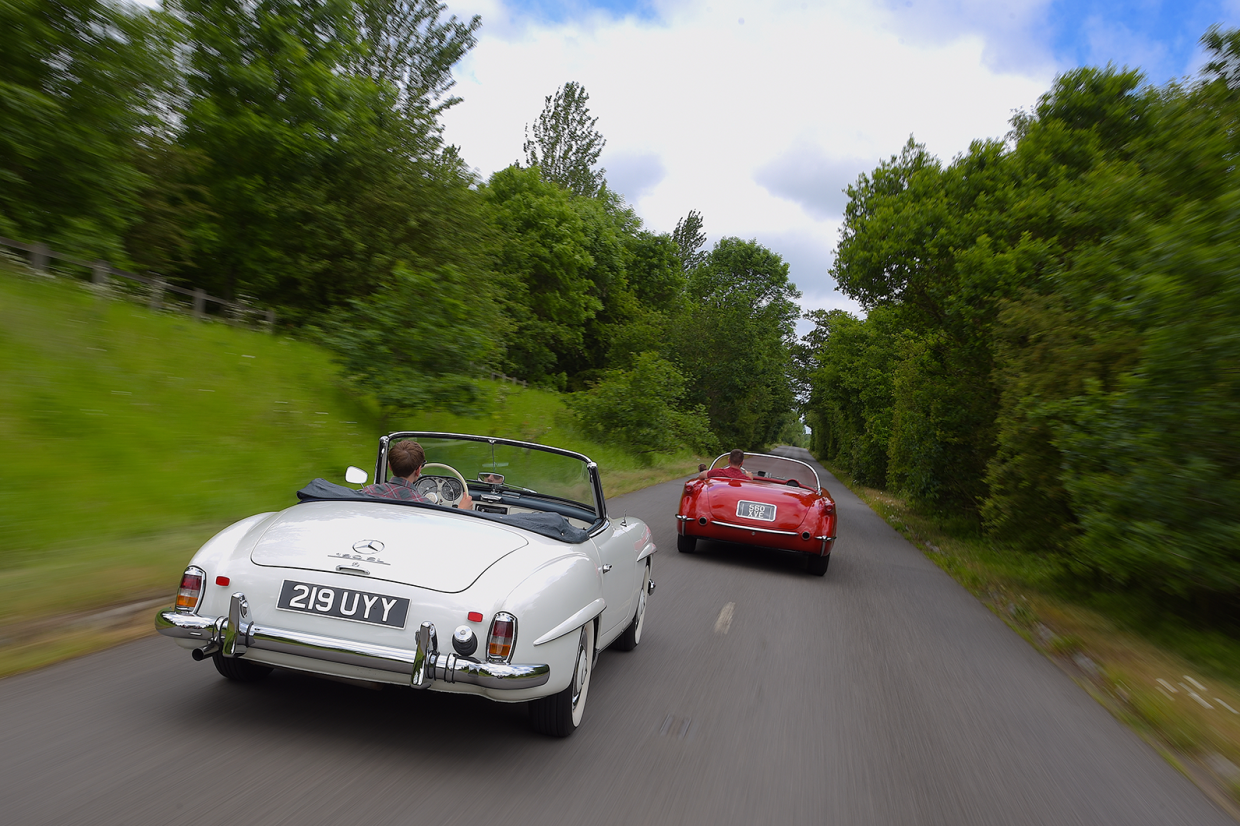 The 190SL, pretty though it is, comes second in its own home behind the 300. It’s second here, too, despite being more than a third more expensive.

Not just for me, if a none-too-scientific straw poll is added in.

“It’s beautiful,” says one onlooker of the SL; the rest are consumed by the ’Vette, snapping away and posing alongside.

Maybe it’s because the C1 Corvette was the start of something in American sports cars, but, secretly or not, it’s something we all want. 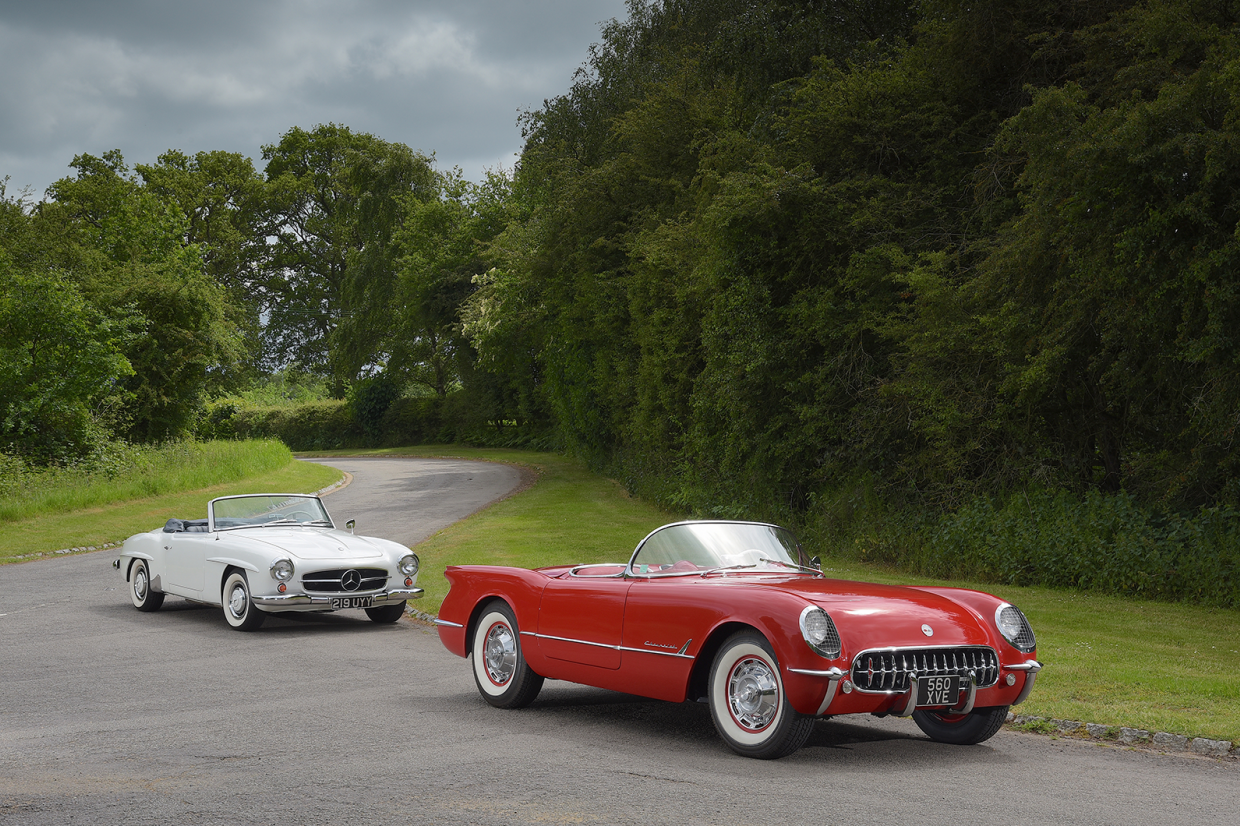