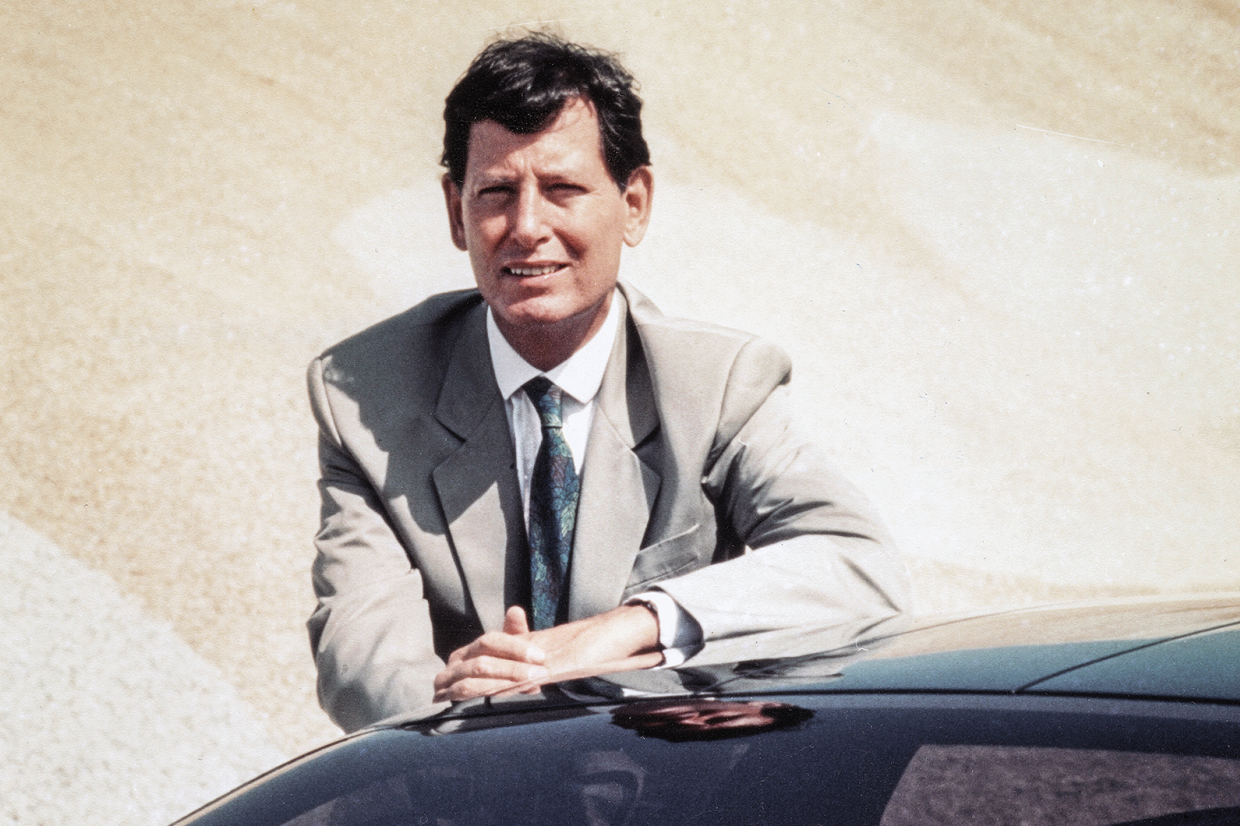 It was time to stop daydreaming as Tom Tjaarda realised that he was on the wrong train.

Jumping to his feet and abandoning the idea of fighting his way through the crowd, he climbed out of the carriage window, hoping his suitcase would follow (it did), and went looking for the train that would take him directly to Turin.

Arriving in the Piedmontese capital four hours later, Tjaarda stepped out of the magnificent post-Renaissance Porta Nuova station and into a ghost town.

Exhausted, he decided to check into the unpretentious but decent-looking Hotel Ligure and, once into his room, he immediately crashed out, sleeping the sleep of the dead. 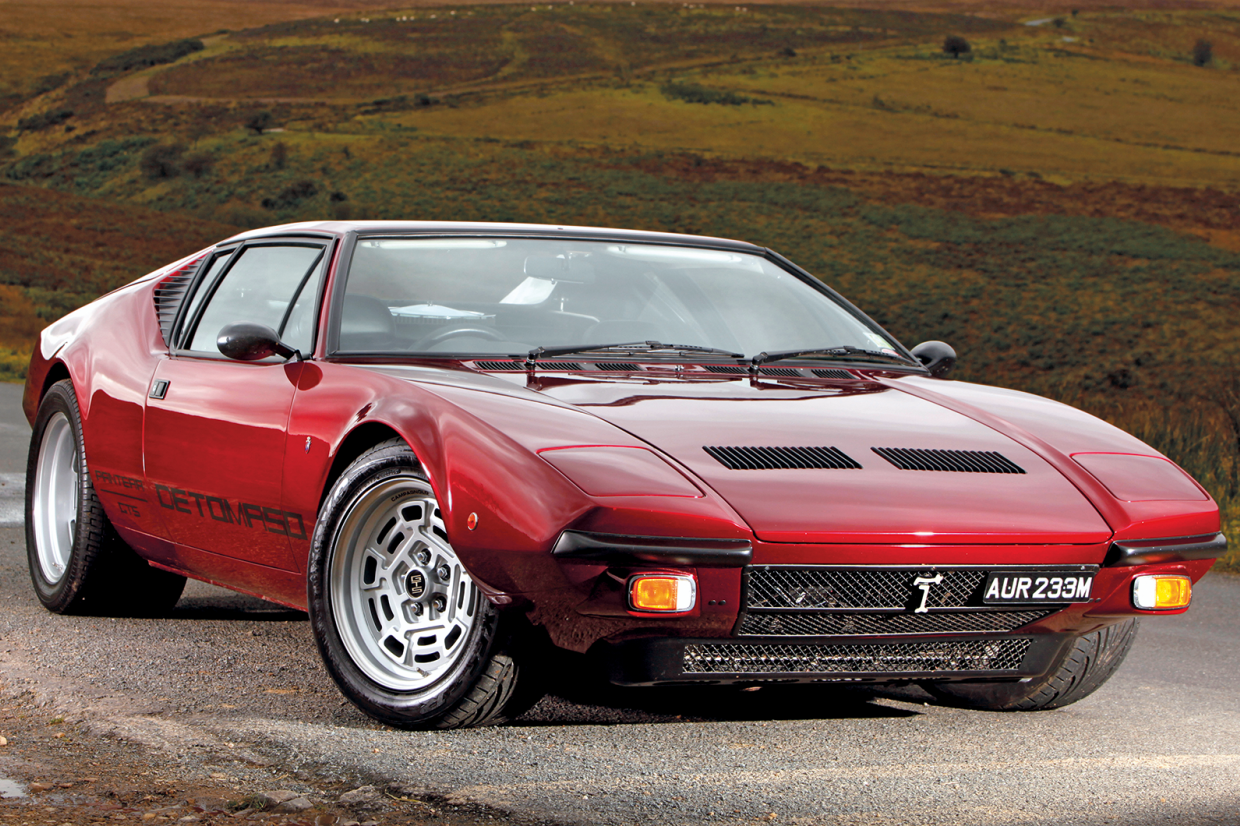 The following morning, Tjaarda asked the receptionist to call Carrozzeria Ghia, but there was no answer: “On holiday, until Monday!”

So, on the morning of Monday 18 August 1958, Stevens Thompson Tjaarda van Sterkenburg – simplified to Tom Tjaarda – pitched up unannounced at Carrozzeria Ghia for his first job.

The firm’s legendary boss Luigi Segre, a well-set man of around 40, welcomed Tjaarda with a pat on the back: “It’s about time you got here; we have a project for you to work on right away.” 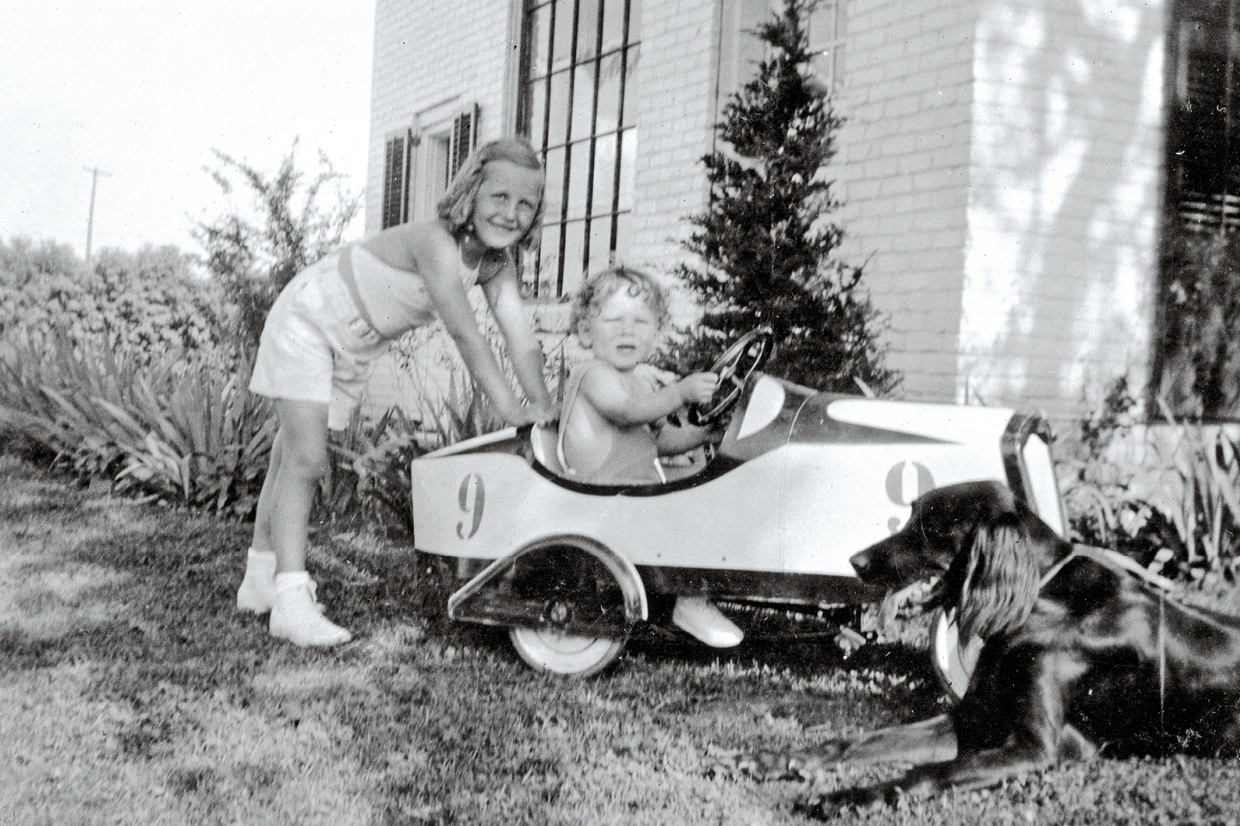 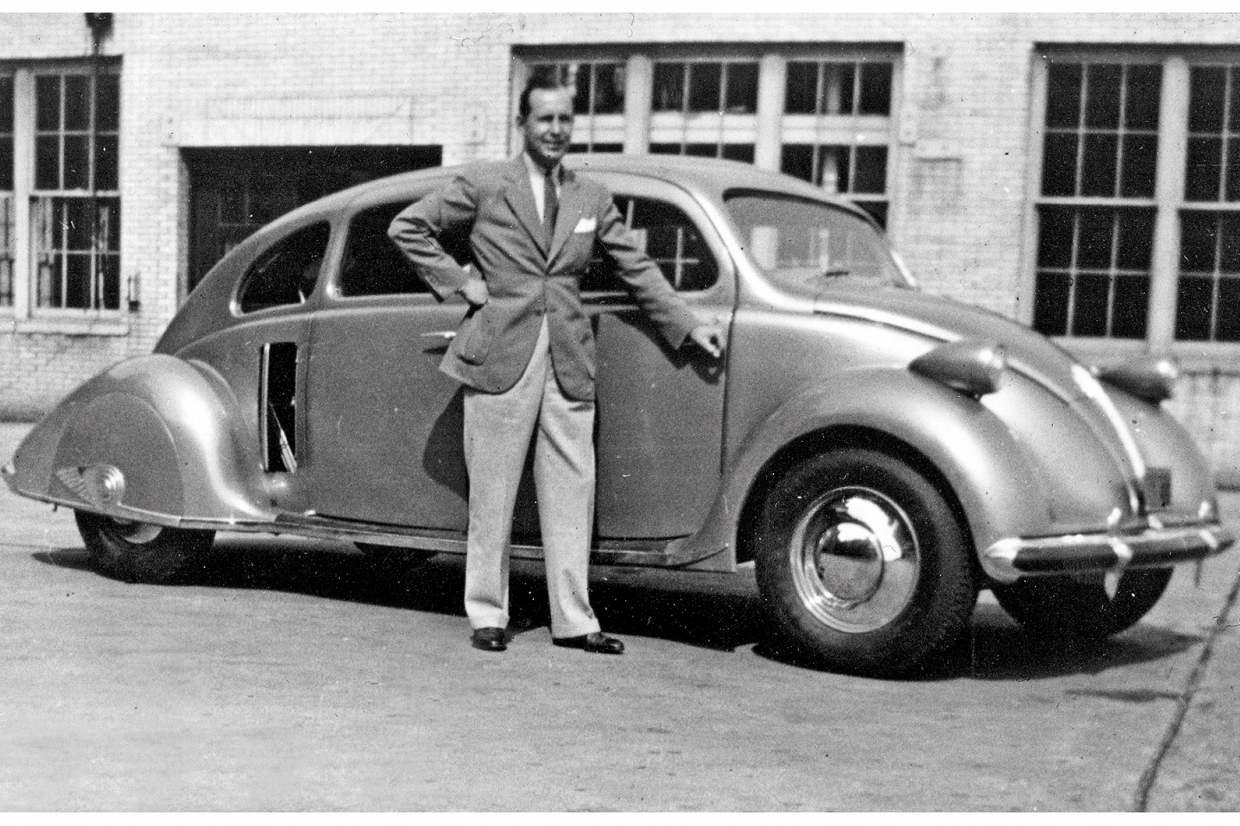 Born on 23 July 1934 in motor city, Detroit, Tjaarda is one of the most famous – and popular – of Turin’s automotive design greats from the past six decades.

Tjaarda’s steep trajectory, from Michigan to Italy and a deep dive into the competitive world of car design, is the stuff of legend.

Tjaarda was not yet five years old when his parents divorced in 1939, and he lived a modest early life with his older sister Elisabeth (Betty to all, who passed away in 1984) and mother Irene Thompson. 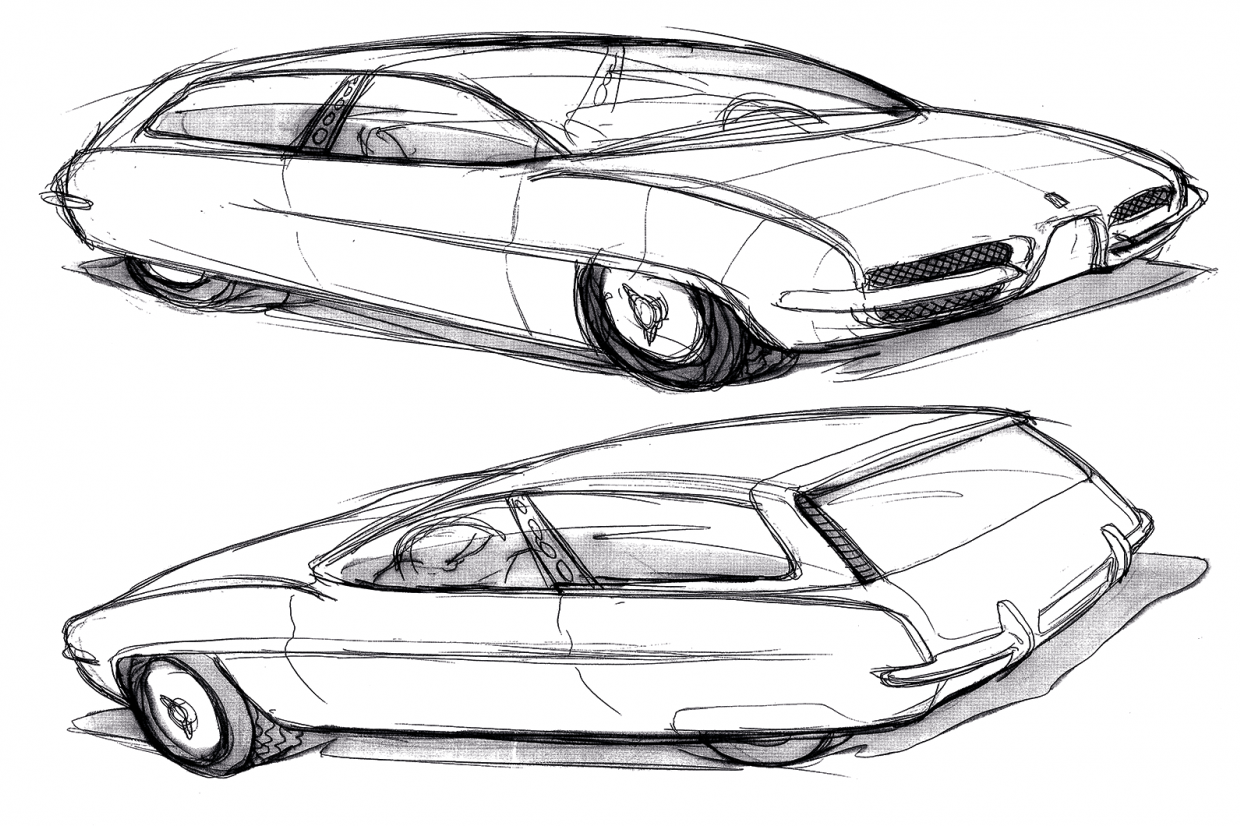 A modern shooting brake was Tjaarda’s graduation project, long before they came back into fashion

His memories of childhood, though, consisted of mostly happy times with a close-knit family.

When asked on several occasions whether he had suffered from the premature dismantling of the family, Tjaarda always pointed out that he was impervious to such feelings, and found it only natural to live with his mother, a very determined woman who easily replaced an absent father.

That man was one Johan ‘Jan’ Tjaarda van Sterkenburg, later just John Tjaarda, who was one of the most important automobile designers of the pre-WW2 era.

A Dutch-American aviator and designer, John was born in 1897 in Arnhem. He had already flown with the Dutch Air Force and KLM, and subsequently made a career in aviation in The Netherlands and England, before he emigrated to the United States in 1923 and turned his focus to car design. 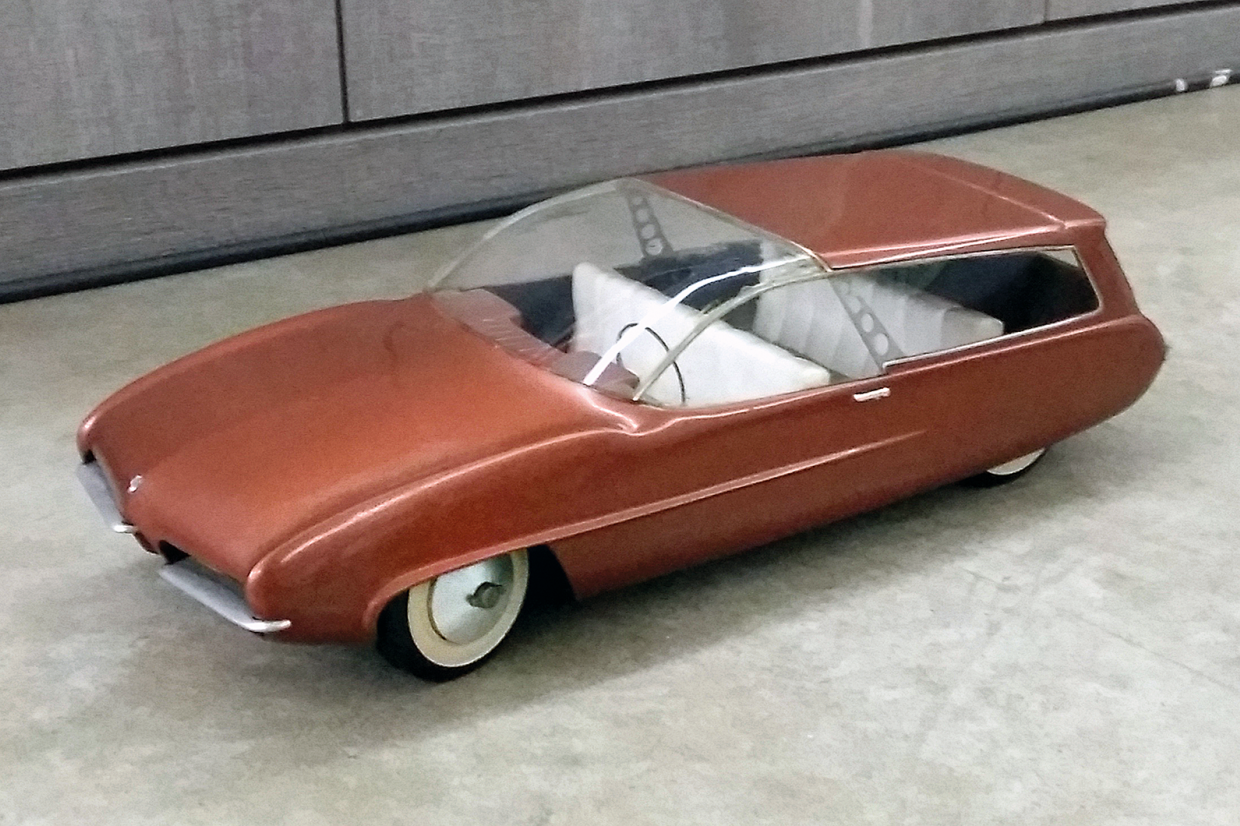 He also styled luxurious coachwork for various companies, including Duesenberg, specifically for the Hollywood set.

John Tjaarda’s most famous design, though, was the Briggs Dream Car, which evolved into the Lincoln-Zephyr. 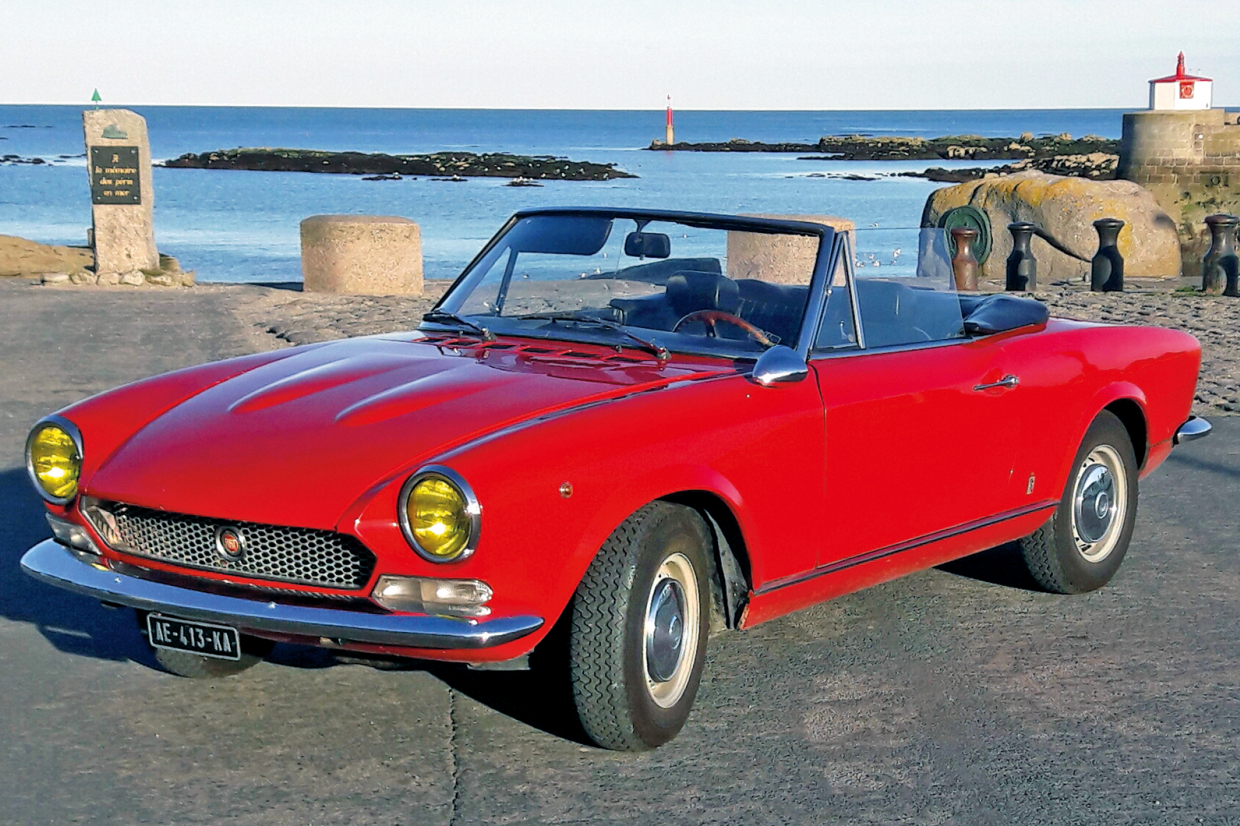 John Tjaarda died on 20 March 1962, when he was just 65, but prior to that father and son had reconnected, and it was perhaps his stories that influenced Tom’s decision to consider a car design project for his graduation thesis at the University of Michigan, where he was studying architecture.

It was the successful completion of this innovative shooting brake that persuaded his professor, Aarre Lahti, to recommend him to Segre at Ghia, and that led to Tjaarda finding himself in Turin in August 1958.

On the very first day of his working life, Tjaarda had the extraordinary luck to land the project to style an all-new car, by himself, less than a month after his 24th birthday. 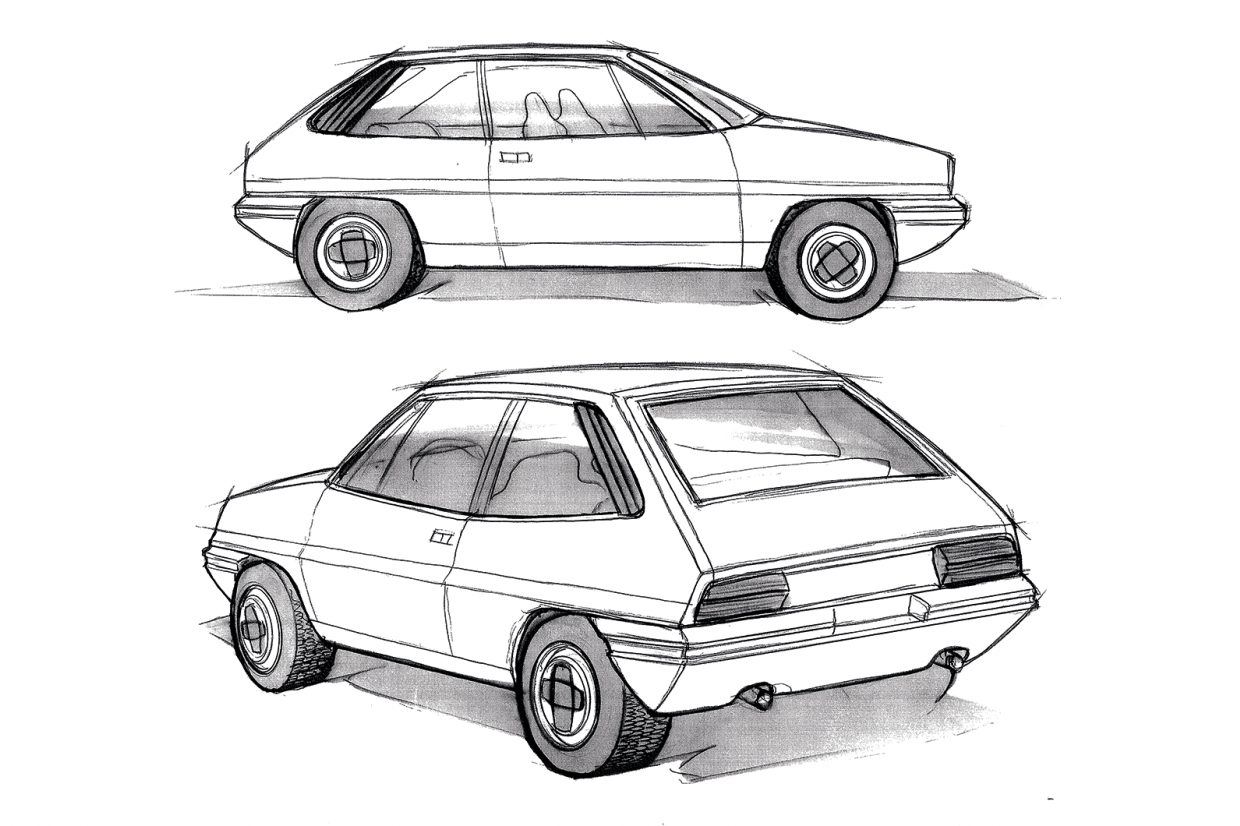 The design of the Innocenti Spider was a mature piece of work, a form and style that could very well have been from a seasoned professional such as Giovanni Michelotti or Pietro Frua.

It wasn’t groundbreaking, nor was it a masterpiece, but a finely detailed, carefully considered and very well-proportioned work of great elegance.

During his short stint of a little over two years at Ghia, Tjaarda designed several diverse projects, including a monorail, a go-kart and a pedal car for children.

In these his style ranged from the strange to the recent retro, but he was yet to establish a distinctive flair of his own. 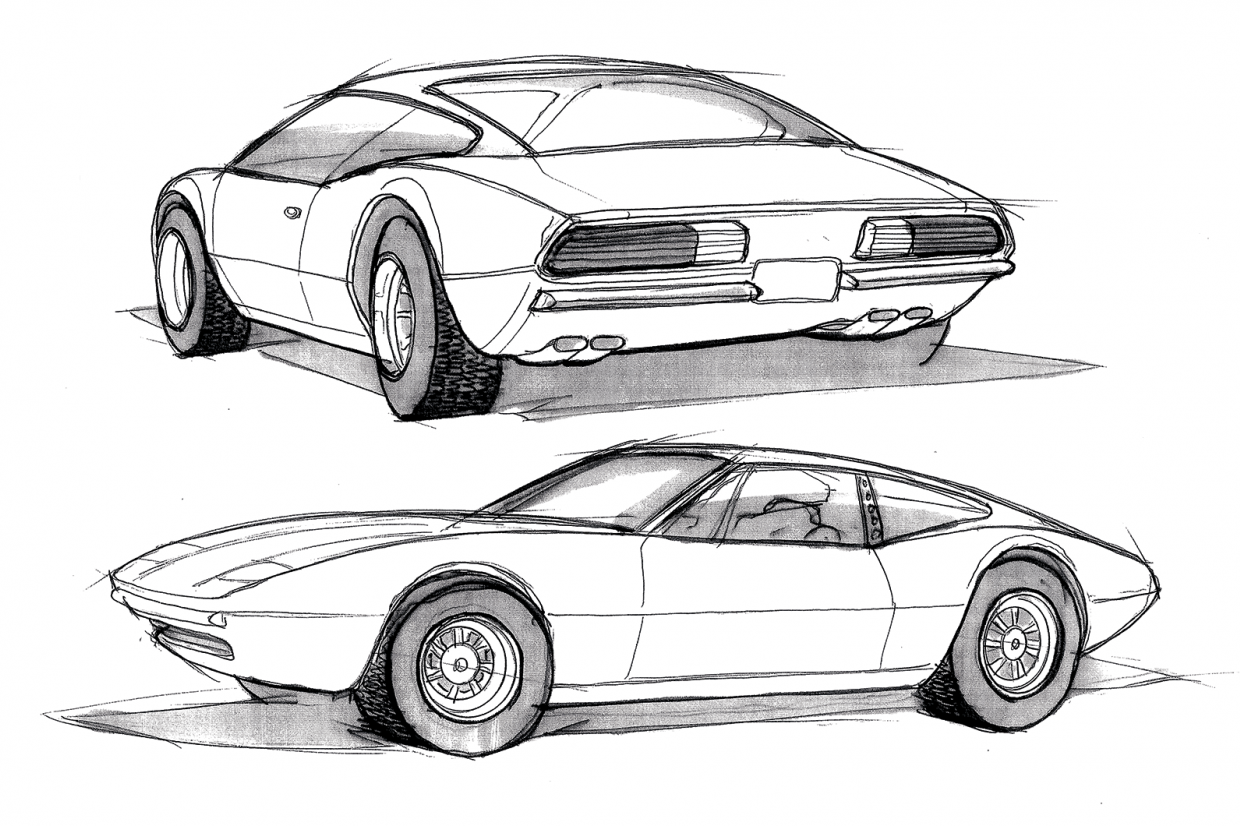 It was at Pininfarina where Tjaarda began to establish a form language and subtle surface treatment that was different from others, and which went on to influence several designs and styling trends.

His first automotive design for Pininfarina was the Corvair Coupé Speciale, an update of a concept from the Italian design house that had so far received a lukewarm response.

Tjaarda’s rework turned out to be far better proportioned, as well as controversial thanks to its ellipsoidal, slanting quad-headlamp treatment.

This same theme came in for further criticism when it was revived on a Ferrari, the 330GT 2+2, yet it was a style that would become popular in American car design, starting with the second-generation Chevrolet Corvair. 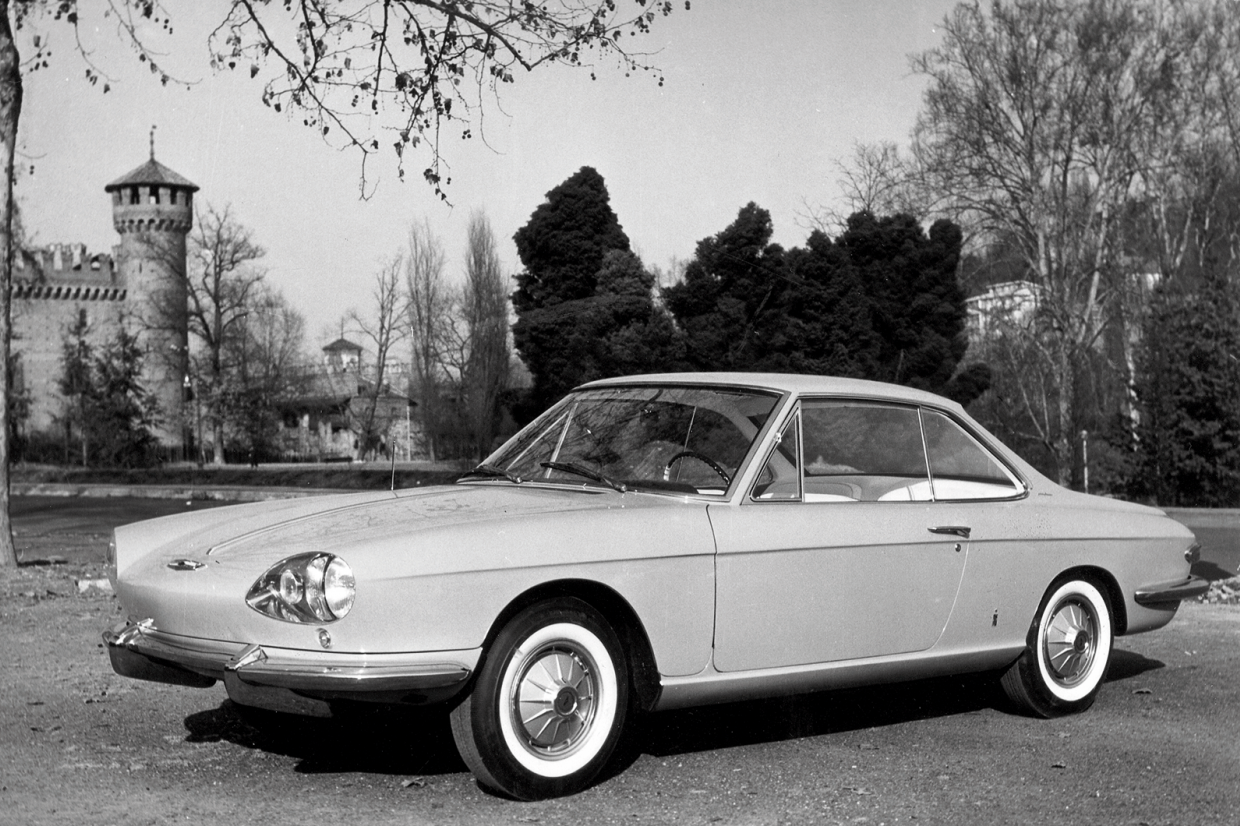 Of even greater influence was the ‘swallowtail’ rear-end treatment that Tjaarda introduced with the gorgeous Chevrolet Corvette Rondine concept of 1963.

This went on to be used in his design for the Lancia Flaminia Speciale 3C concept as well as the flagship Ferrari 365 California and the Fiat 124 Sport Spider, a car that became one of his calling cards.

Yet while at Pininfarina Tjaarda had to fall in line with the carrozzeria’s ‘family look’, which to the likes of boss Sergio Pininfarina and design manager Franco Martinengo was more important than any individualism. 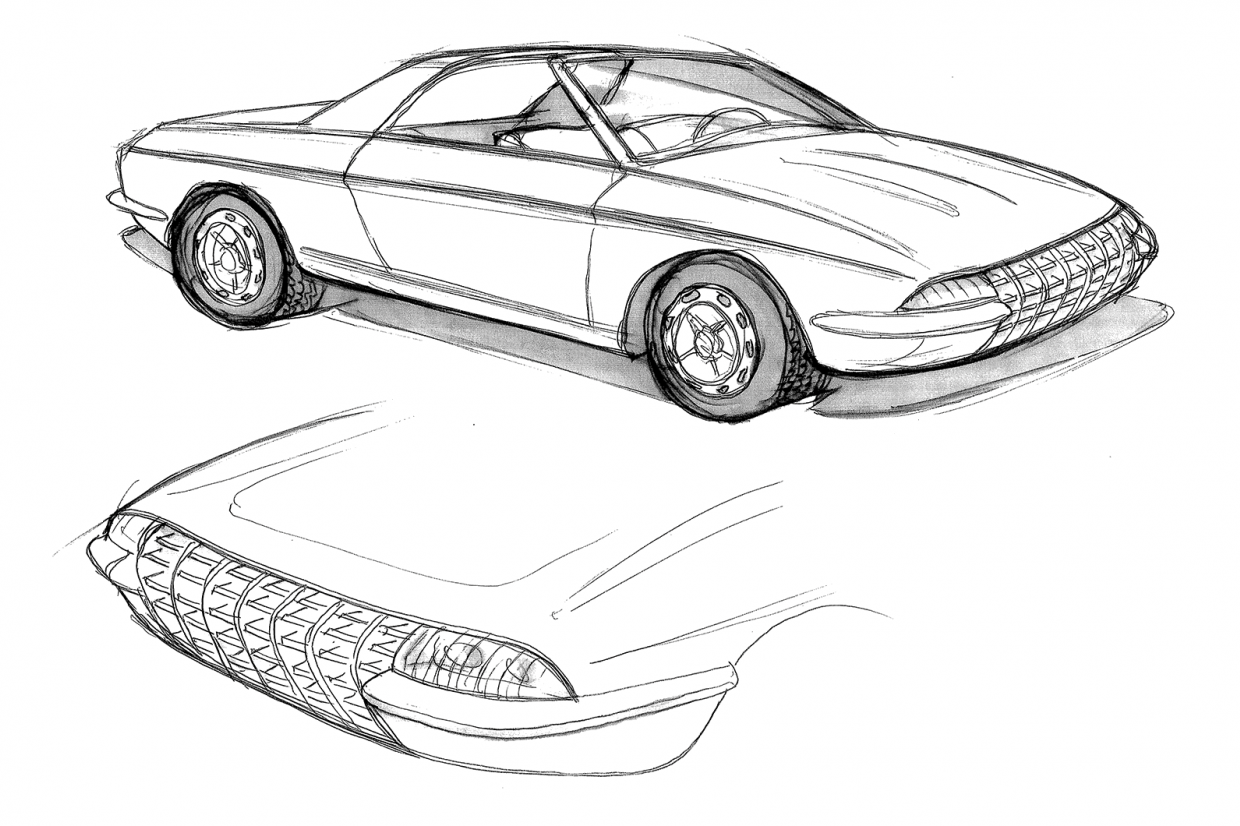 That explains why designs from Tjaarda or his fellow studio mate Aldo Brovarone and others all managed to have that softly rounded Pininfarina style, even if it was subtly differentiated by that classily Tjaarda swage line of the Rondine and the 124 Spider, which began mid-flank and swept over the rear wings to merge with the swallowtail.

Upon his return to Ghia in 1968, Tjaarda was able to really define and make the most of his distinctive design signature – a beautiful mix of sharp edges, subtle lines and sweeping, well-defined profiles.

The first example of this emerging style was the Serenissima Ghia GT of 1968. 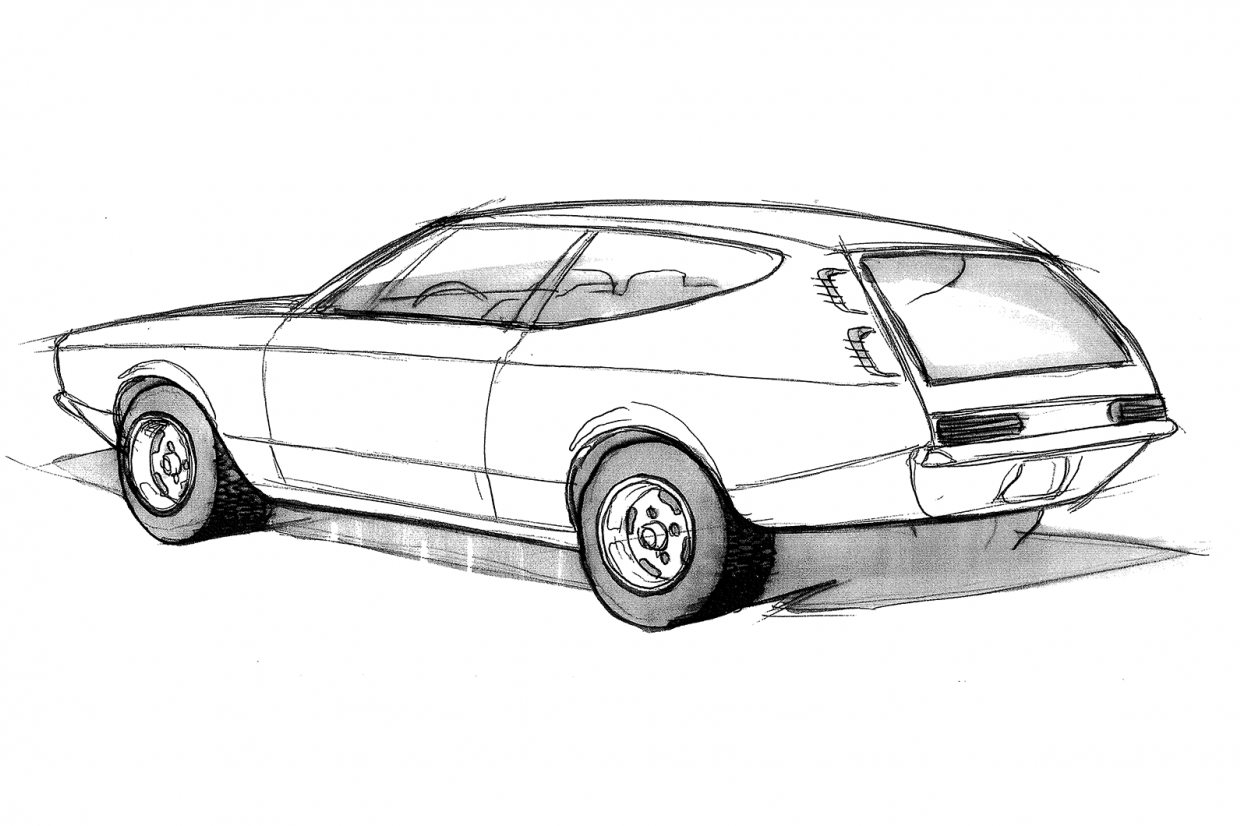 There is no denying that many of these trends had already been established by his contemporaries, notably Marcello Gandini and Tjaarda’s good friend and erstwhile Ghia colleague Giorgetto Giugiaro, yet the American brought to this edgy, wedgy new form language a certain sense of balance and elegance.

Into his third and fourth designs at Ghia, both for Isuzu (the Bellett MX1600 and the Sports Wagon), this new, sharper style was fast becoming the hallmark of both Tjaarda and the venerable design house.

With Alejandro de Tomaso taking over the carrozzeria, accompanied by some considerable funding from Ford, Ghia flourished and so did the talents of its 35-year-old expat designer. 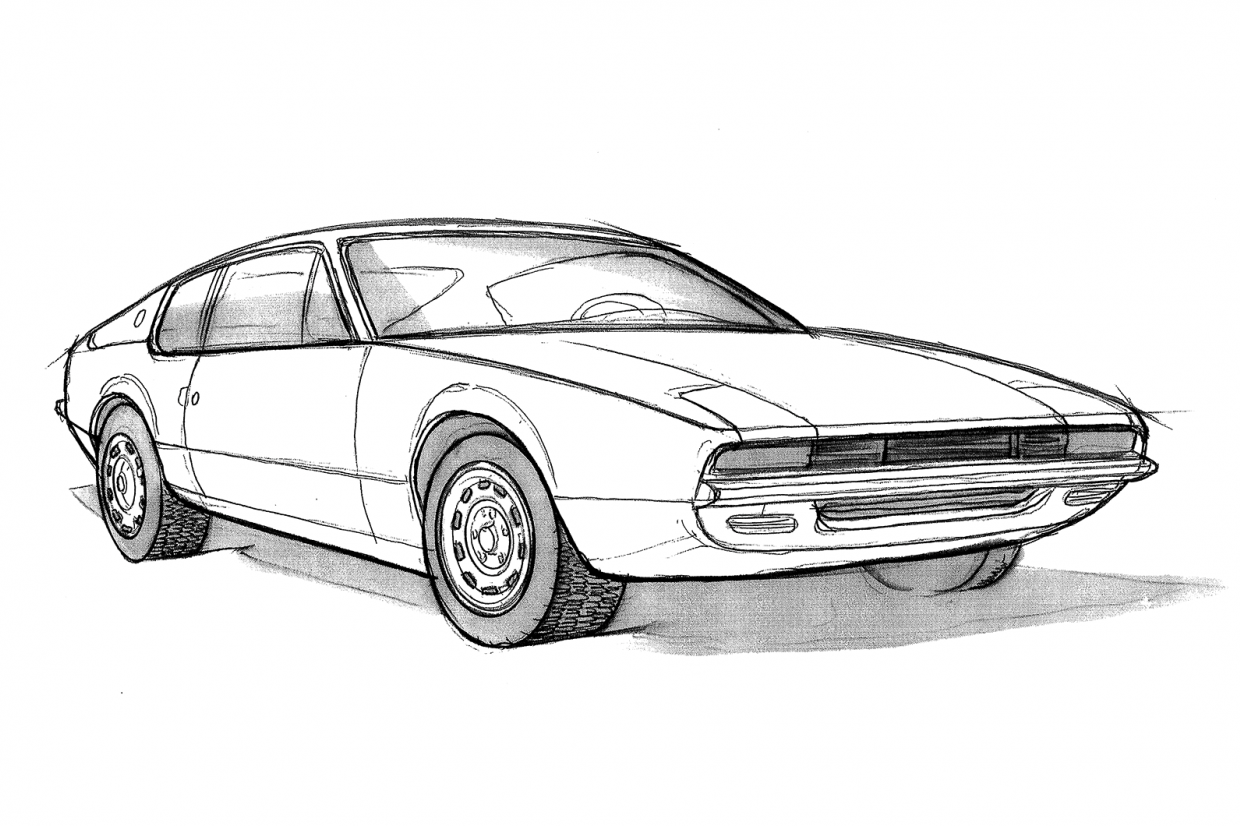 A more recent sketch of the Giacobbi-Tjaarda Sinthesis, a private project with fellow American Peter Giacobbi

From 1968 until the mid-’70s Tjaarda was at the height of his powers, churning out one excellent design after another – one of which remains a true automotive milestone, the magnificent De Tomaso Pantera.

If the Lamborghini Countach and the Maserati Ghibli were the pinnacle for Gandini and Giugiaro, the Pantera became the definitive Tom Tjaarda design, the car with which the American sealed his place in the automotive pantheon.

The Pantera was also the car that brought Tjaarda international fame and recognition, with features published in magazines on both sides of the Atlantic. 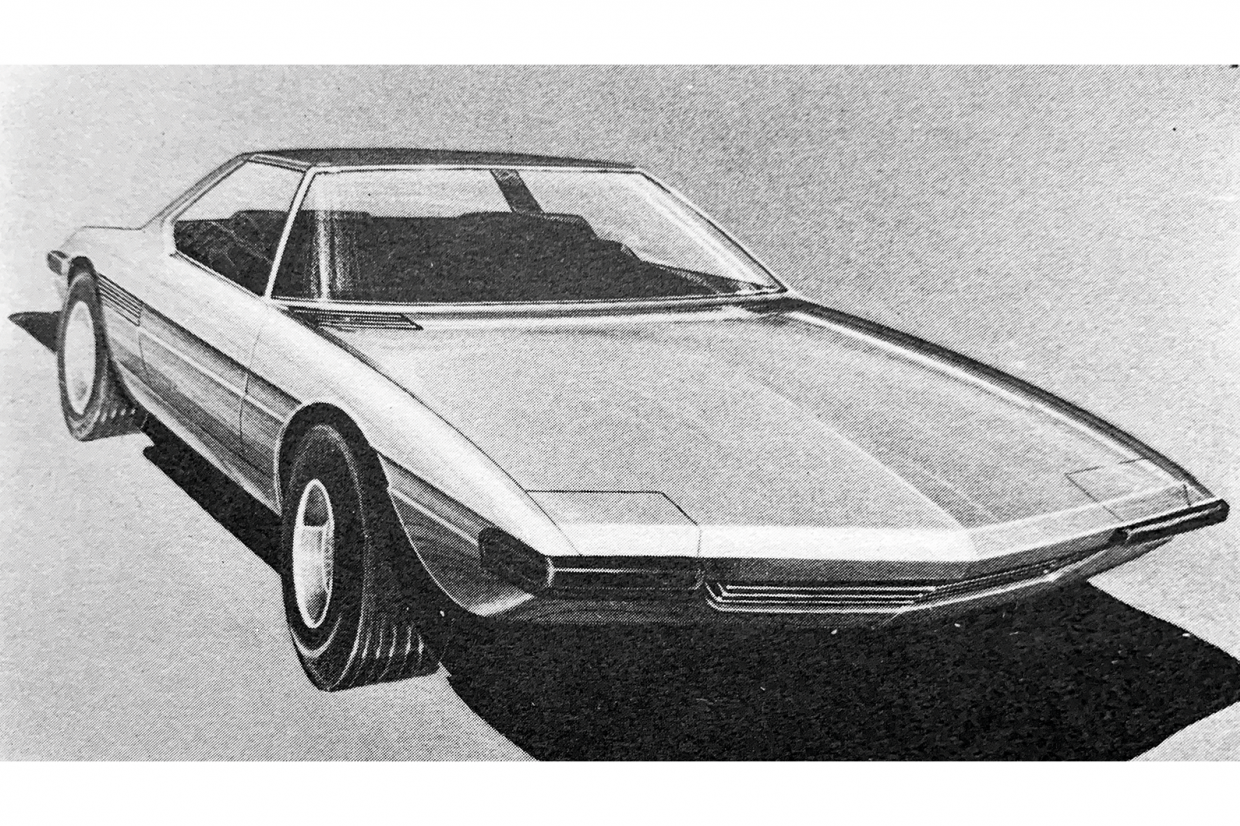 Tjaarda was one of the few designers who could work well with the mercurial Alejandro De Tomaso.

Yet he chose to part ways when the Argentinian sold out to Ford, with the American remaining at Ghia where he had found a certain comfort in the design studio.

He had also met his lifelong partner, Paola Bronzino, and stability on the home front was another deciding factor. 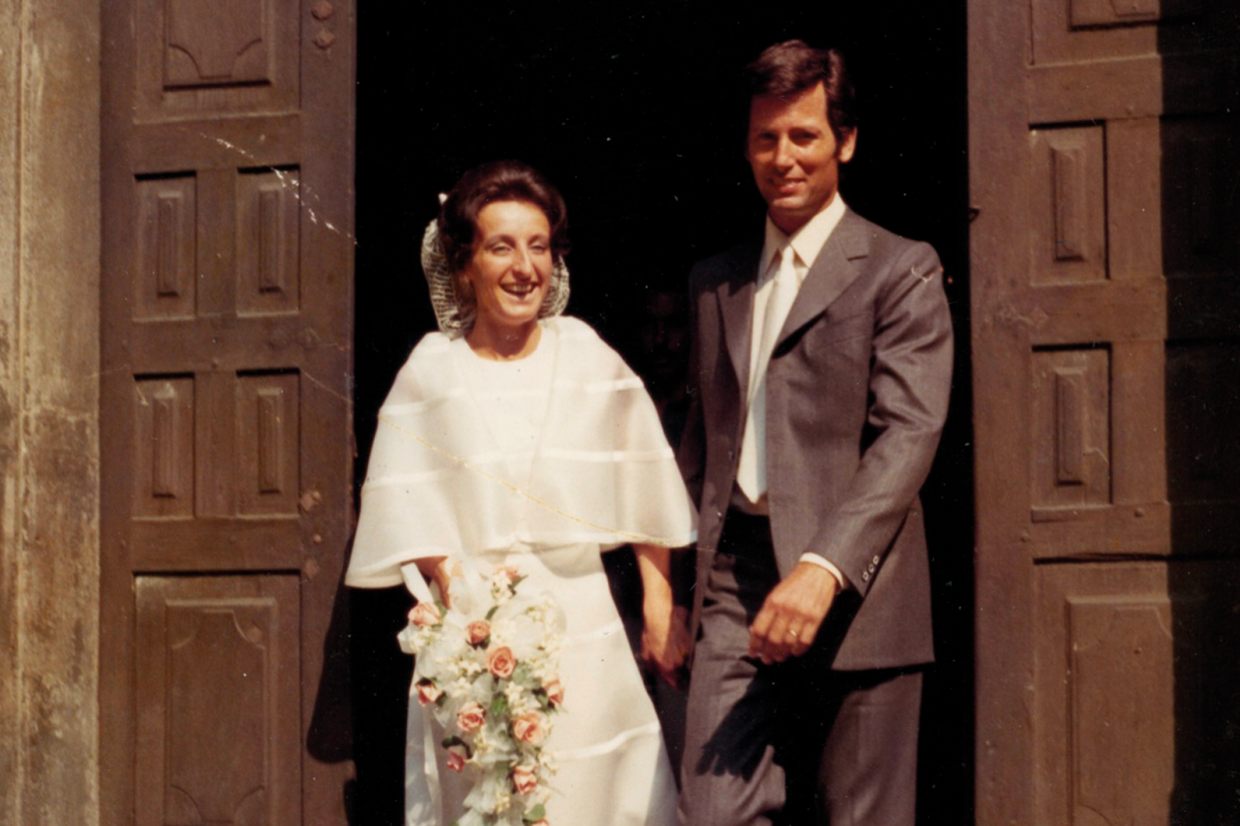 Tjaarda’s final period at Ghia and then his four years at Fiat were less productive in design terms, as he tried his hand at managing projects and teams.

Unhappy in the complicated corporate maze of the Fiat Group, Tjaarda moved on to a small studio start-up, Rayton-Fissore, where he was the only designer.

This heralded the start of a fertile period for the stylist, designing and developing several projects, among them another seminal work for his new employer, the Rayton-Fissore Magnum. 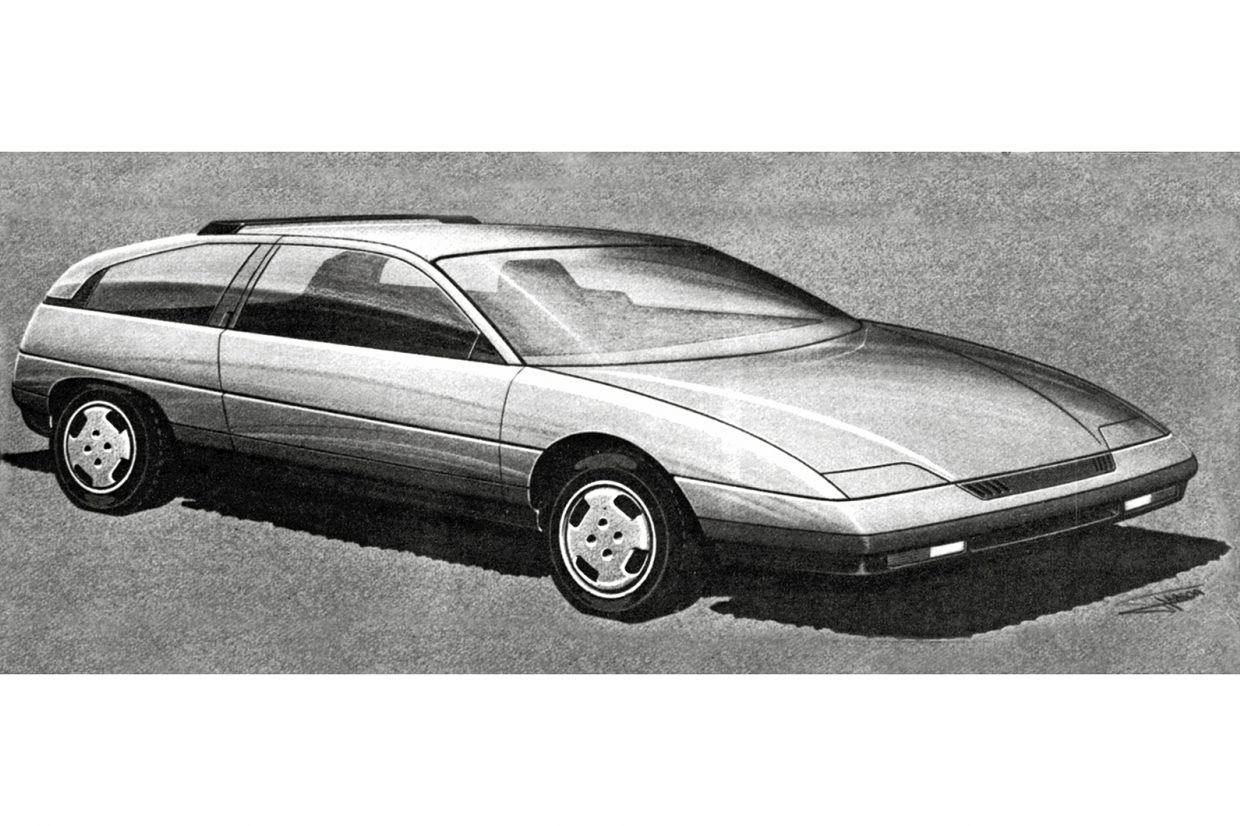 As a result, when in 1984 Tjaarda decided to strike out on his own, he had one of the finest portfolios in the automotive world, as well as a reputation as one of the design giants of Turin.

Projects came easily, but many of them were for smaller concerns such as Aston Martin, Bitter, the newly rejuvenated Bugatti, Isotta Fraschini and Spyker, and similar specialist sports car makers.

Into the new millennium, however, Tjaarda was becoming better known for his starring appearances at various concours d’élégance, seminars and design competitions. 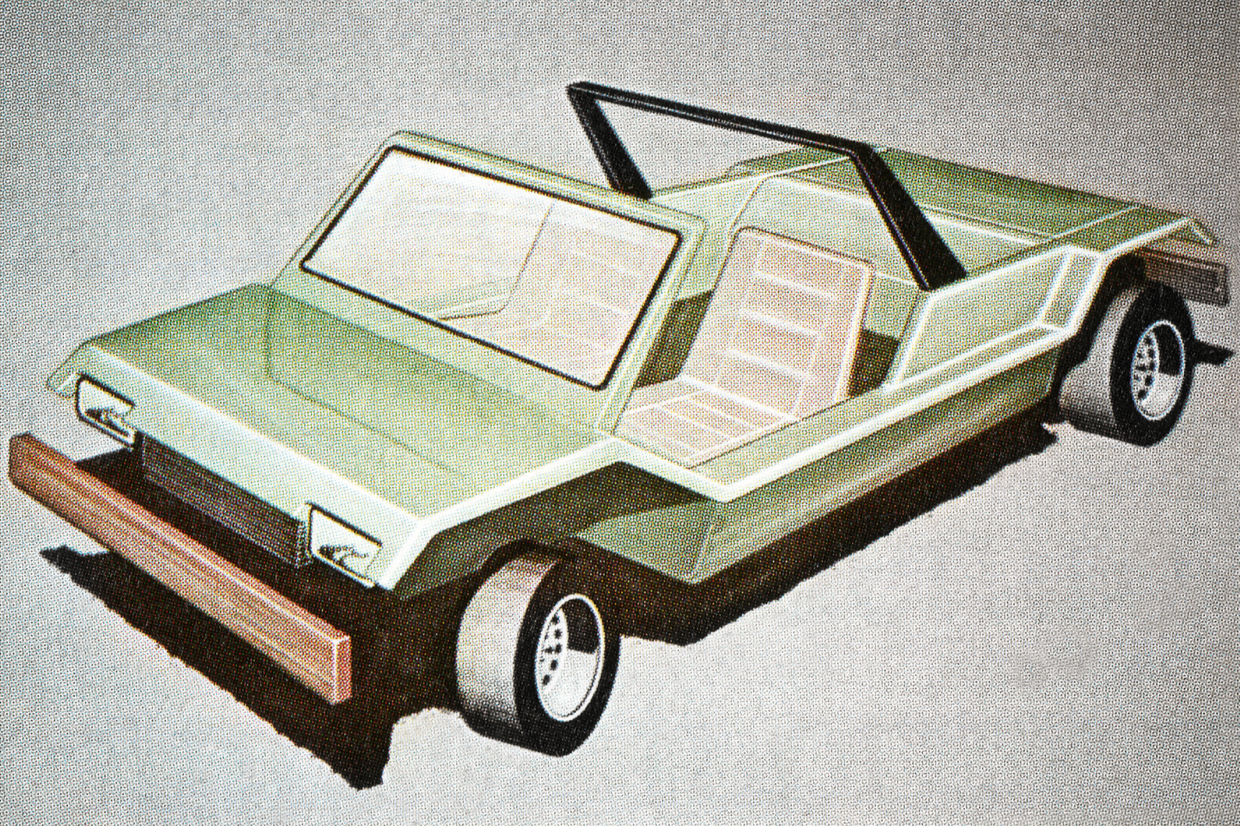 Having met founder Frank Mandarano in 1991 and struck up a great friendship, he had been a fixture at the annual Concorso Italiano, held every year in Carmel, California, a few days before the Pebble Beach Concours d’Elegance, either as the subject of a tribute class or as a judge.

He was regularly a special guest or a member of the presiding jury at concours in Rainbow Lagoon Park, Toronto; at Schwetzingen, Germany; and at the magnificent Paleis Het Loo in Apeldoorn, The Netherlands, the country of his father’s birth.

In 2006, Tjaarda was also appointed to the judging panel for BBC Top Gear India’s design competition and soon became a regular, visiting the country several times. 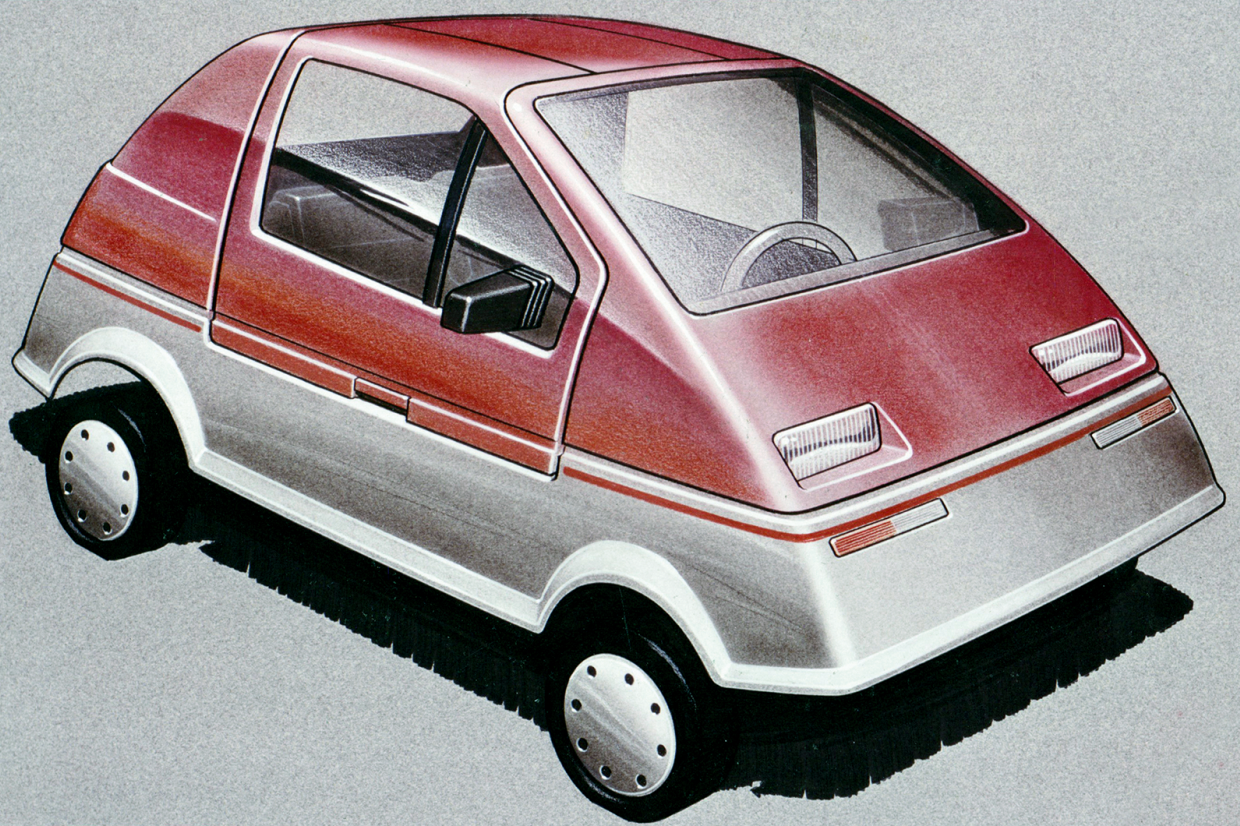 In February 2014, Tjaarda took the unusual step of selling his personal archive with French auction house Artcurial, during the Rétromobile show in Paris.

It was acquired by friend and fan Corrado Lopresto, who added the documents and drawings to his extraordinary collection of cars and archive material in Milan, Italy.

Not only does Lopresto own five of Tjaarda’s one-off designs – the Lancia Flaminia Speciale 3C and the Marica; the De Tomaso Pantera II/Montella; and the two Isotta Fraschini T8/T12s – but he now preserves the great man’s drawings, too. 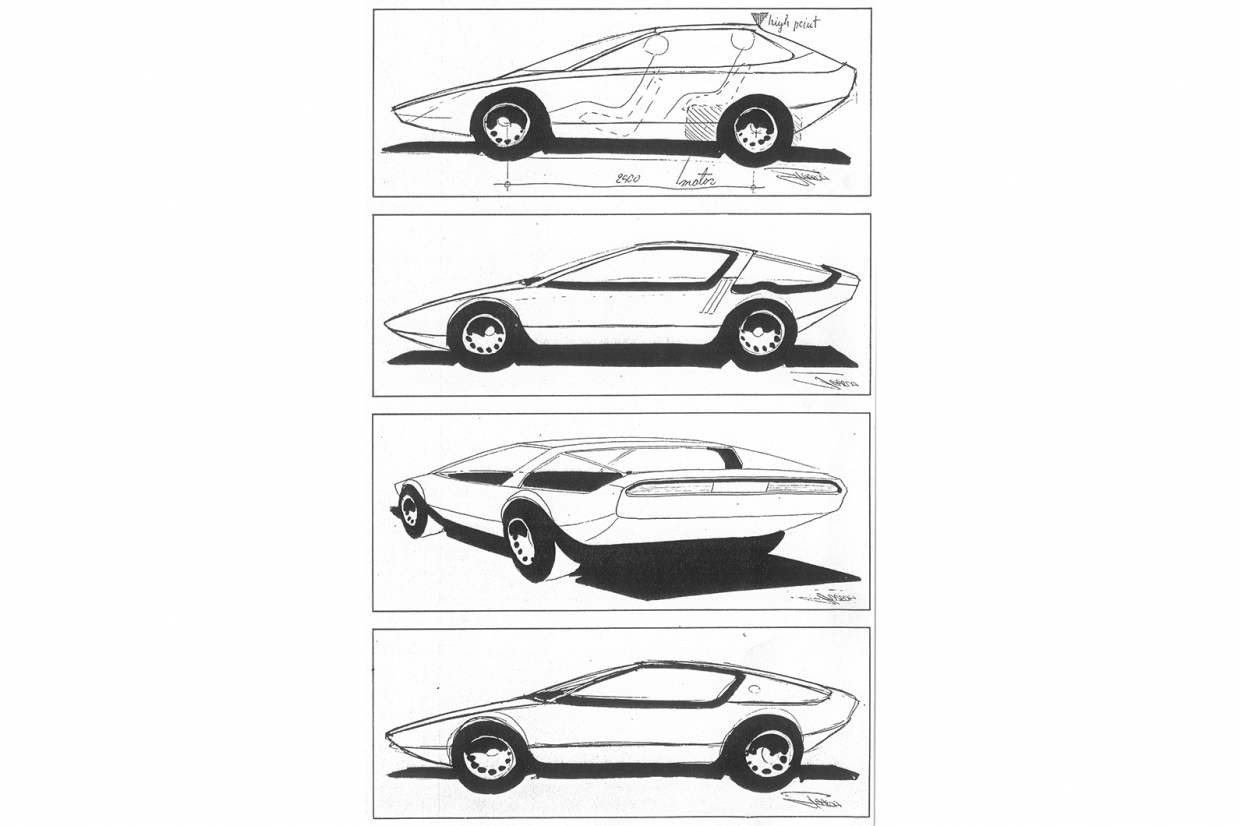 A series of concept renderings from early in the Sinthesis project, for a 2+2 coupé

A popular and accessible figure, with whom fans loved connecting as much as he enjoyed meeting them, Tjaarda had a keen sense of humour and was always happy chatting to enthusiasts at events.

He was generous with his time, sharing the process of designing cars with their owners.

A rock star of the design world, he often commented that Americans loved a good story – and he had no shortage of them. 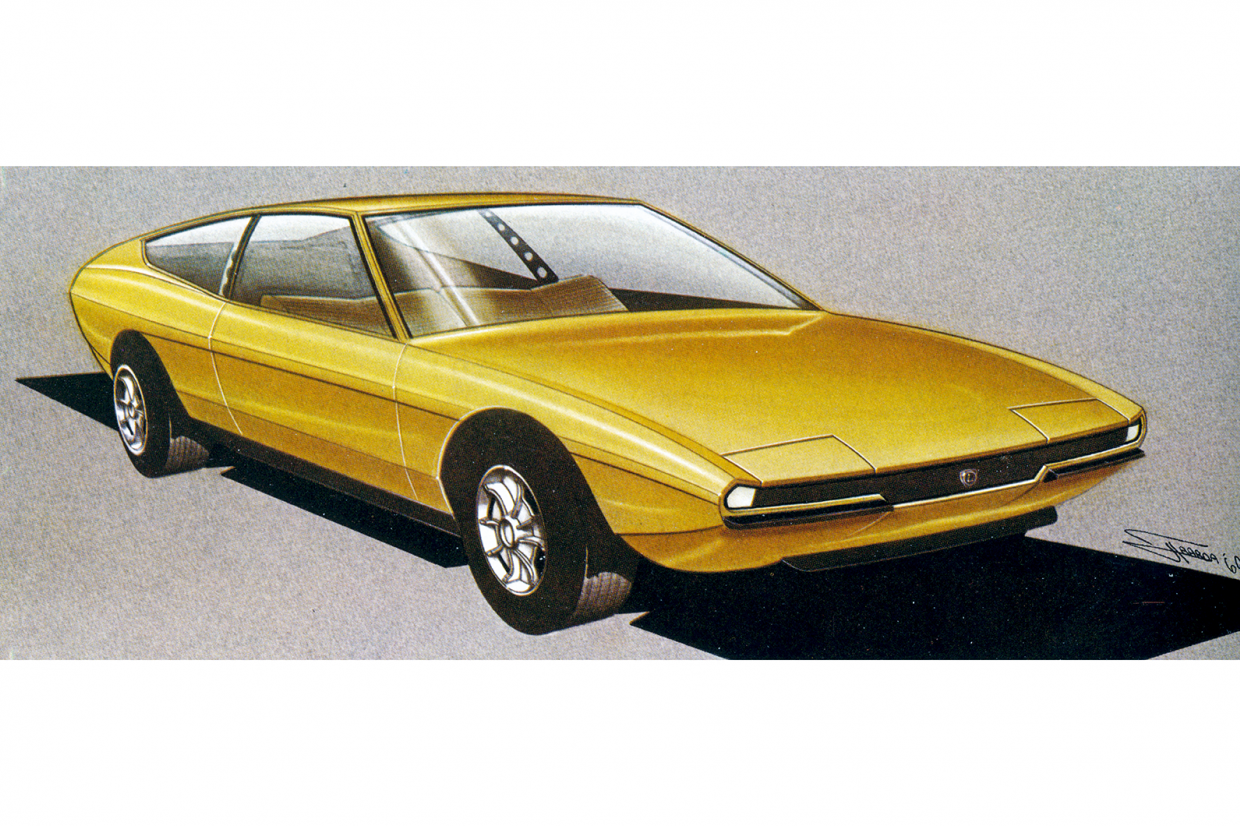 An illustration of a Tjaarda masterpiece, the 1968 Lancia Fulvia HF Competizione by Ghia, which sadly remained a one-off

Out of the ordinary: 50 years of the Lamborghini Countach