Something For The Weekend – Honda NSX 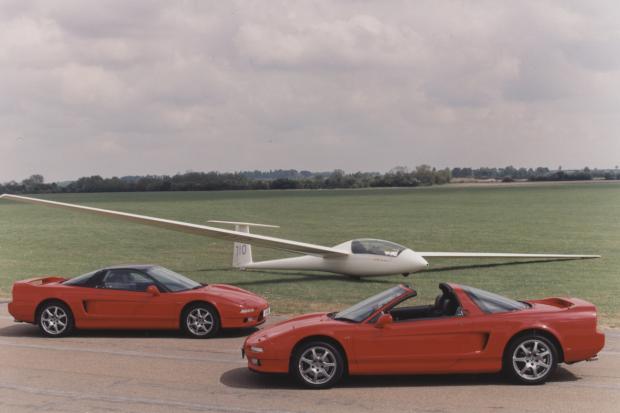 While many manufacturers could lay claim to building practical supercars, Honda was arguably the first to make an everyday machine capable of taking on other mid-engined exotics.

That’s not to say that the NSX was not exotic itself. In fact, a certain Ayrton Senna developed the car’s neutral handling, but it was also the world’s first all-aluminium production car.

The V6 engine was one of its standout features, with titanium-alloy conrods (another first), and there remains no better advert for Honda’s VTEC system, which allowed the NSX to rev effortlessly to 8000rpm.

The mid-engined layout gave the Japanese beauty wonderful balance in corners, and excellent traction out of them. And the unassisted steering on early models delivered communication to rival the best.

Yet it was the NSX’s practicality that marked it out from the competition. With Honda internals, the machine promised reliability that its contemporaries couldn’t match, while the stepped power delivery of the engine gave it a Jekyll and Hyde character. Refinement was there if you wanted it, plus there was a rich roar of induction noise on tap as well.

Couple that to a cabin that offered excellent all-round visibility, hard-wearing switchgear, plus light and easy-to-use controls and there really was nothing that could touch it. The icing on the cake came in the form of a boot that, we’re told, could even swallow a set of golf clubs, while the NSX-T offered a roof-out targa option.

The only real downside the NSX’s optional automatic gearbox, which changed it from a supercar to merely a fast car, but also added to its day-to-day appeal. That said, some prefer the auto to drive.

Honda even offered a full-fat version – the NSX-R. Lighter and more powerful (although not officially so), the R lacked much of the civility of the standard car and was never officially imported into the UK.

Now a connoisseur's choice, the NSX has generated a devoted following since its production ended in 2005, with web-based advice available from www.nsxcb.co.uk, www.nsxprime.com, www.nsxregistry.com and www.centralcoastweb.com

Surprisingly, the NSX can be had for as little as £16,500, as this machine proves. Yes, as an auto, it’s less desirable than a manual, but it still shares many of its attributes.

While the auto may not offer supercar performance it can still rack up the bills expected of the breed. When buying an NSX, there are two main areas to pay particular attention to: body condition and service history.

The former is particularly important on an all-alloy car, which is substantially more expensive to put right than a steel machine. With this in mind, poor panel gaps mean something is not right and it is best to step away. Also look underneath for damage and split gaiters.

A full history, meanwhile, is the secret to the Honda’s durability. A religiously followed maintenance schedule can mean mileages of more than 100,000 are easily attainable – as many US-based machines have proven – but a poor service record could spell future trouble.

The NSX’s VTEC heart should start on the button, hot or cold, and settle into a smooth idle. It’s vital to check for oil or water leaks, plus any signs of overheating on the test drive. It's not good news if the car has had replacement head gaskets and a radiator; the engine could have been irreparably damaged.

This example looks like a good option for those wishing to avoid such worries.

A genuine UK car, rather than a grey import as above, the machine has had money lavished on it, including a major service replacing the cambelt, water pump, crank pulley, filters, plugs and oils, plus new discs and pads all round.

Taking into account the firm’s reputation for reliability and this car's meagre 48,700 miles, it’s fair to expect that this machine should be capable of many more trouble-free years.

And that in essence is what the NSX is all about. It can deliver smiles in abundance, but on a cold winter’s night when all you want is a car that will start, it can provide that, too. Use our buyer’s guide to help choose one and you’ll get a fast and desirable supercar than you can enjoy every day.