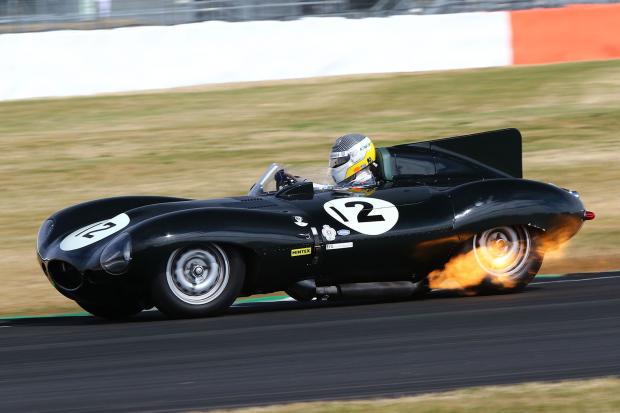 This plus a packed infield featuring over 120 car clubs meant there was plenty for visitors to enjoy.

Competition between clubs off-track was as tough as it was between drivers on track and the Ferrari Owners’ Club’s were rewarded for their efforts by winning the Adrian Flux Trophy for the Best Car Club Display. The Yokohama Trophy for Club Car of the Show, meanwhile, went to Allan Southward for his fabulous Aston Martin DB1.

And that’s not all: Silverstone Auctions hosted a £5.7m road-car sale over the weekend, too. 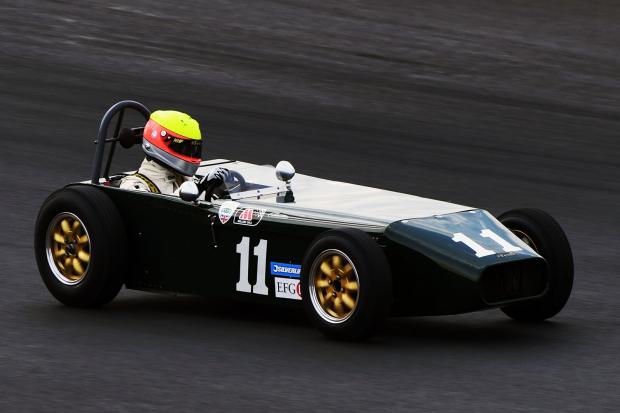 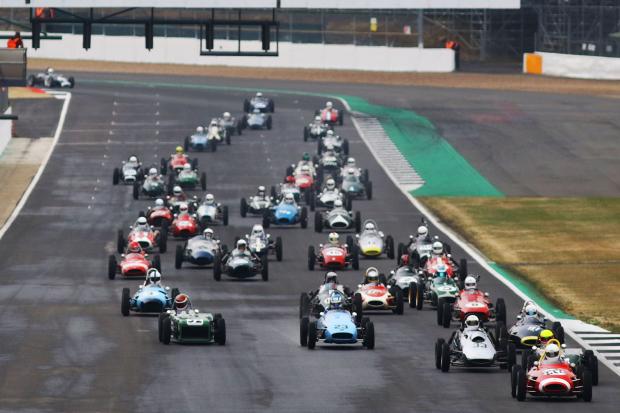 Back to the track, and after Friday’s qualifying, first in the 21-race programme was the Jim Clark Trophy for Historic Formula Junior (1958-1960). This was the first Formula Junior contest at a meeting which welcomed a record number of such cars for the category’s diamond jubilee.

The weekend’s first race winner was Will Mitcham (U2 Mk2), who crossed the line 1.627 secs ahead of Christopher Drake (Terrier Mk 4 Series 1), with Miles Griffiths (Lotus 18) third.

In the 50-minute Royal Automobile Club Tourist Trophy for Historic Cars, the Martin Hunt/Patrick Blakeney-Edwards-driven AC Cobra took the chequered flag after 20 laps, a convincing 42.492 secs from the James Cottingham/Harvey Stanley E-type, with Sam Hancock/Gregor Fisken a similar distance back in third in their E-type. 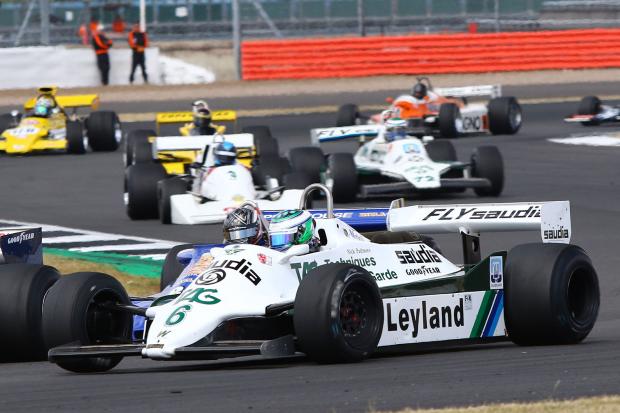 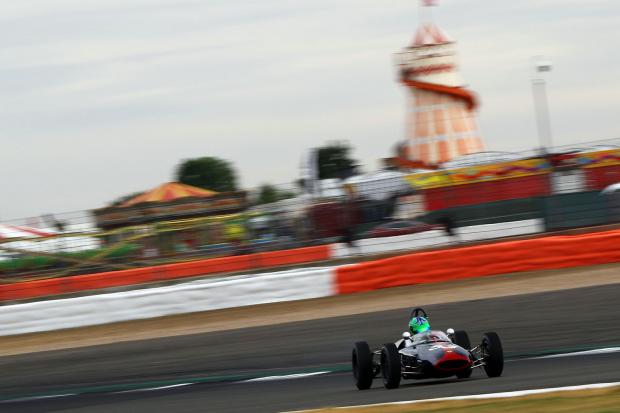 There were rather more comfortable victory margins in both the evocative FIA Masters Historic Formula One and HSCC Road Sports (’47-’79) contests. In the first, Nick Padmore (Williams FW07C) came home more than 16 secs ahead of Michael Lyons (Hesketh 308E), John Davison (Lotus Elan S1) victorious in the latter from pole by over 22 secs from Richard Plant (Morgan Plus 8).

Next, it was the Adrian Flux Trophy for Pre ’66 Grand Prix Cars, Nuthall back and this time taking the win, his Cooper T53 crossing the line 1.328 secs from Peter Horsman (Lotus 18/21) and third-placed Timothy de Silva (Lotus 24). 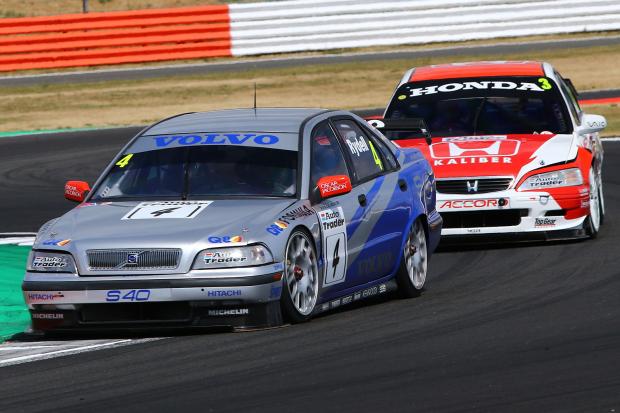 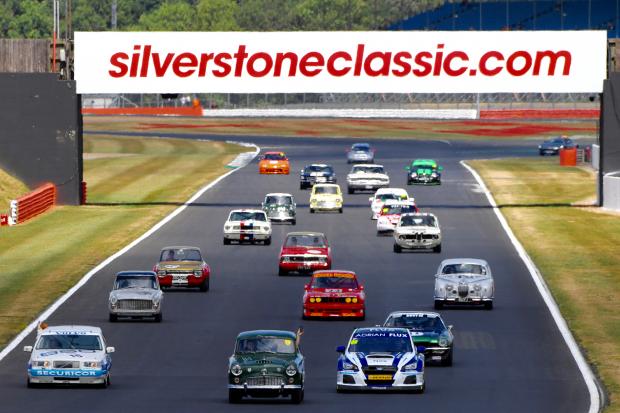 It was an easier win for Oliver Bryant in his Lola T70 in the Masters Historic Sports Cars, finishing seven and a half seconds in front of Gans (Lola T290), meaning back-to-back second-place finishes for the Swiss who was well clear of Diogo Ferrão/Martin Stretton (Lola T292) in third. 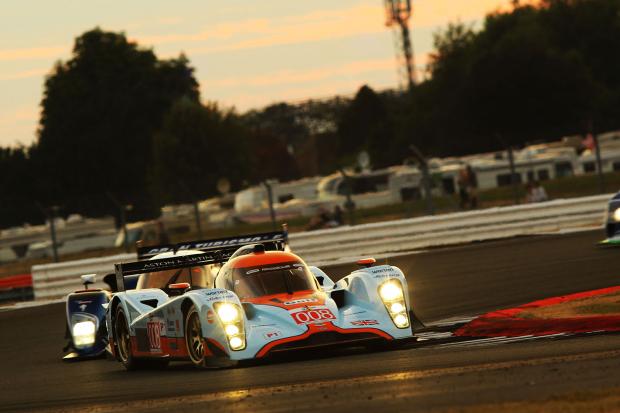 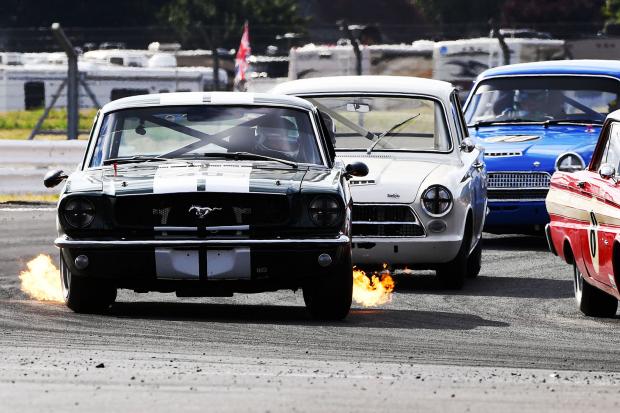 Sunday was another scorcher and was dubbed ‘Tin-Top Sunday’ to mark the fact that four of the day’s 10 races were for touring cars.

Harry and Nick Whale took their E30 M3 to first place in the Historic Touring Car Challenge, Mark Smith/Arran Moulton-Smith in a similar BMW and the Ford Capri of Ric Wood completing the podium.

The meeting’s final grid was the Transatlantic Trophy for Pre ’66 Touring Cars, and it was a Ford 1-2-3. Wolfe scored his second touring-car victory of the day in a Falcon alongside Mike Gardiner, Mustangs second and third, with Craig Davies and James Thorpe/Sean McInerney respectively. 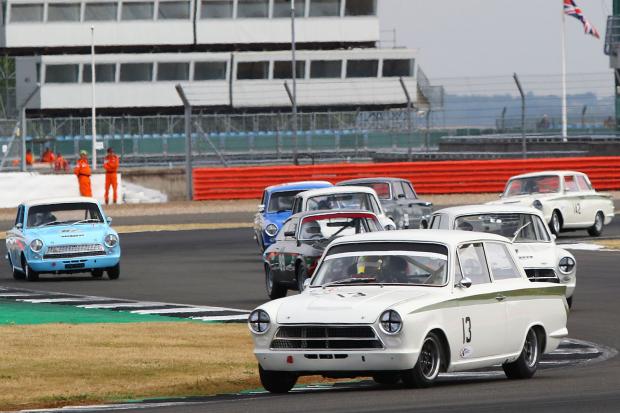 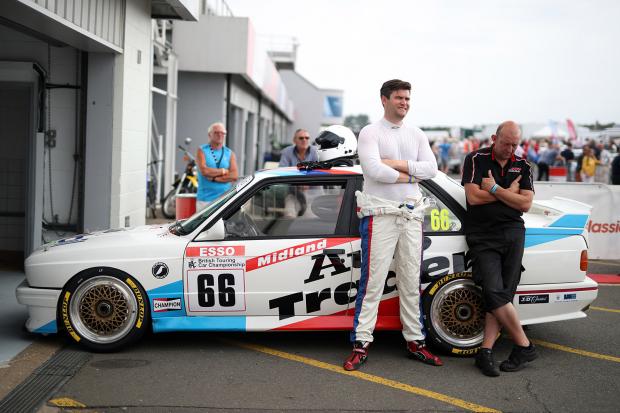 In Sunday’s other races, Wilson (Lotus 20/22) took another win, this time in the Jochen Rindt Trophy for Historic Formula Juniors, from Cameron Jackson (Brabham BT2) and Peter Morton (Lightning Envoyette).

The John Surtees Trophy – the meeting’s last Historic Formula Junior race – saw Andrew Hibberd (Lola Mk2) take victory from podium returnees Mitcham (U2 Mk2) and Drake (Terrier Mk4 Series 1), while it was a repeat of race one in the Historic Formula One race, Padmore’s Williams from Lyons’ Hesketh.

It was also two from two for Tandy when he won the second Masters Endurance Legends contest, this time just half a second in front of Hervé Regout (Lola Aston Martin DBR1-2), David Porter (Peugeot 908) third.

Once the meeting’s racing was done, Lyons picked up the Henry Hope-Frost #FEVER Award in honour of the much-loved late broadcaster, freelance journalist and C&SC colleague who passed away earlier this year. This was for the driver who produced the most memorable high-octane moment from the weekend, Lyons picking it up following his around-the-outside pass on Stretton’s Tyrrell at Stowe on Saturday.

And having taken third place in the second Masters Endurance Legends race, Porter’s Peugeot 908 LMP1 received the Stuart Graham ‘Scarf & Goggles’ Award for the most admired competition car at the Silverstone Classic 2018.

The Silverstone Classic auction: the highlights

How to watch the Goodwood Revival 2021 without being there