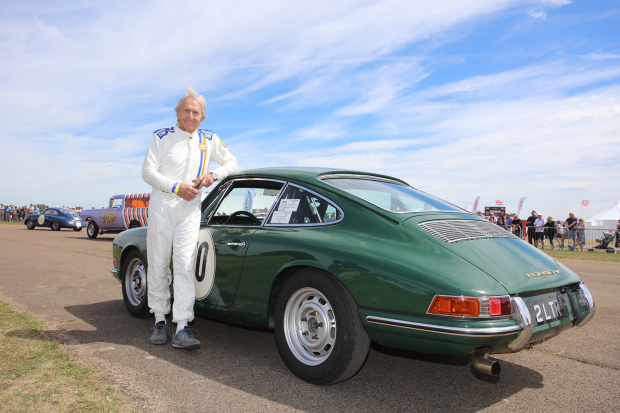 Hundreds of classic cars, scores of vintage planes and dozens of military vehicles delighted the thousands of ticket-holders at the first Classic & Sports Car Show in association with Flywheel at the weekend – and the weather wasn't bad, either.

Our first live collaboration with the Flywheel Festival, which took place at Bicester Heritage in Oxfordshire, was an unqualified success, from the thrilling on-track action to the high standard of cars entered in the Show's two concours competitions and the impressive air displays up above.

The pristine period-correct surroundings of the Bicester Heritage Technical Site formed the perfect backdrop to the Show, a Brightwells auction provoked a bidding frenzy and our Guest of Honour Derek Bell MBE lit up the first day, both on the track and in the book-signing tent.

Oh, and did we mention that the weather was good? 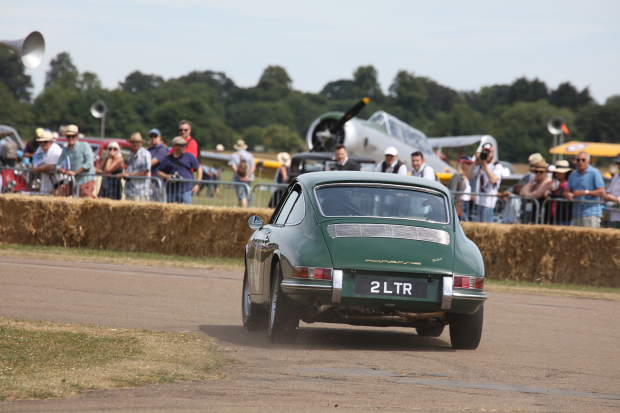 Highlights were almost too plentiful to list, but we'll do our best.

On the demonstration track, Bell's turn in a 1965 short-wheelbase Porsche 911 thrilled his many fans on the Saturday – and he was similarly thrilled to be there.

“To see all the classic cars from such a variety of marques here at the Show is beautiful,” he said. “They are pieces of art. And watching old planes being flown in such a daring way, showing the real history of what made England what it is, is very special.” 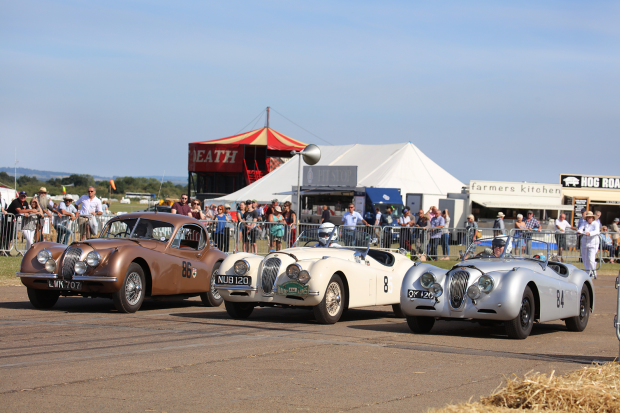 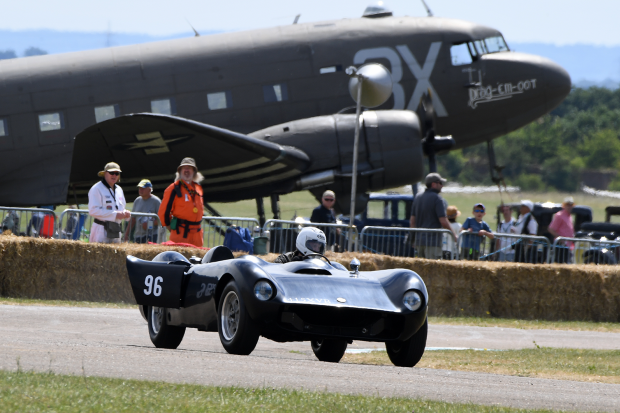 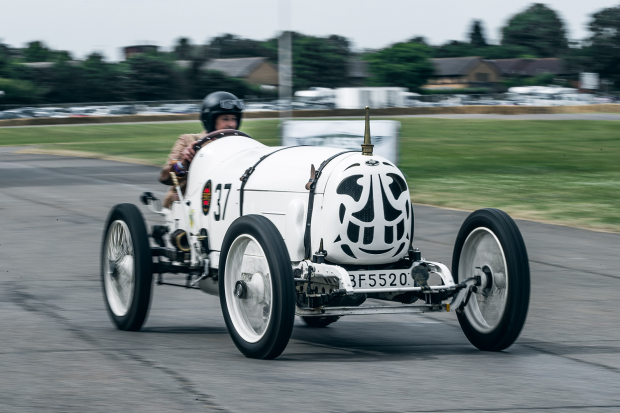 It was Coventry, rather than Stuttgart, that really stole the show on Bicester's demonstration track, as Jaguar Heritage brought along a spectacular set including D-type, Montlhéry XK120 coupé and ‘NUB 120’, the famous Alpine Rally winner, to celebrate 70 years of the XK engine.

The magnificent – and incredibly loud! – Broadspeed XJ12C, whose quad exhausts sent a V12 boom ringing around the site as it bounced off the surviving WW2-era hangars, was another standout, while the paddock contained everything from vintage cyclecars and De Dion-Bouton trikes to a Grand Prix Aston Martin DBR4 and C&SC’s own Julian Balme in his mighty Ford Ranch Wagon ‘Gasser’ drag car, Kandee Twist.

The most spectacular runs were provided by Dr Robin Tuluie in his recently completed 1957 Kellison EXP001, which spent most of its time sideways as he thrilled the crowds on the figure-of-eight course. 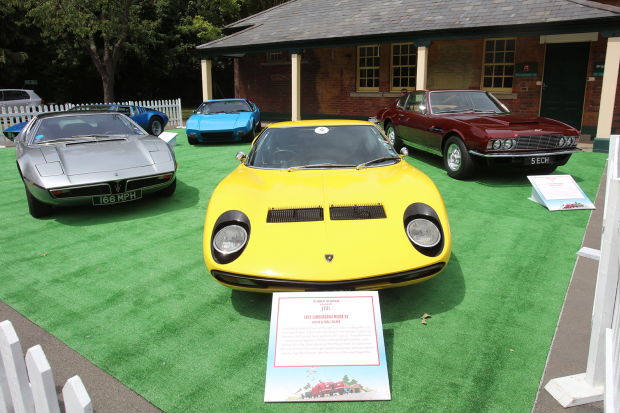 Even away from the demonstration track, noteworthy cars were everywhere you looked.

The Show featured two concours competitions, and both, in very different ways, showcased many remarkable vehicles.

The Flywheel Concours can be thought of as the professionals' contest: here were a couple of dozen cars worth many millions of pounds that had been split into five distinct classes: Dawn of the Supercar, Movie Star Cars, 50 years of British Leyland, Classic & Historic Rally Cars, and The Class of 1948.

The Supercars class was won by Niall Holden’s stunning 1972 Lamborghini Miura SV – one of just seven right-hand drive examples and a car that was previously owned by Rod Stewart. That beat off stiff competition from George Lambton’s Maserati Bora, and Norman Dawood's lovely 1969 De Tomaso Mangusta to take the top honours. 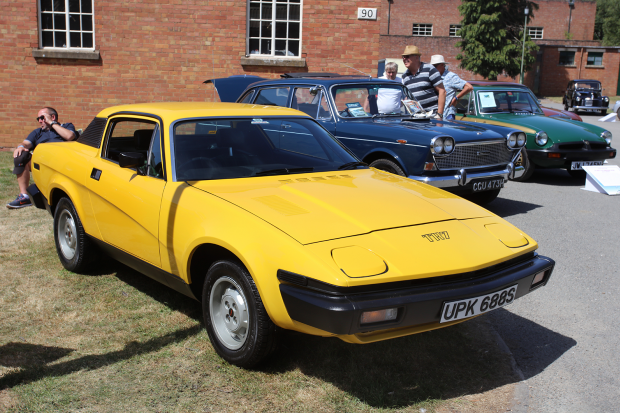 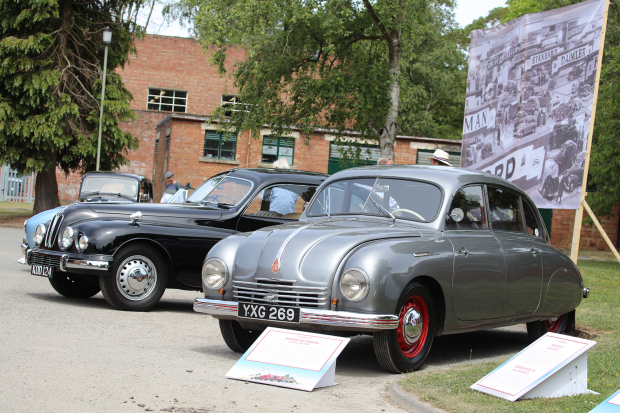 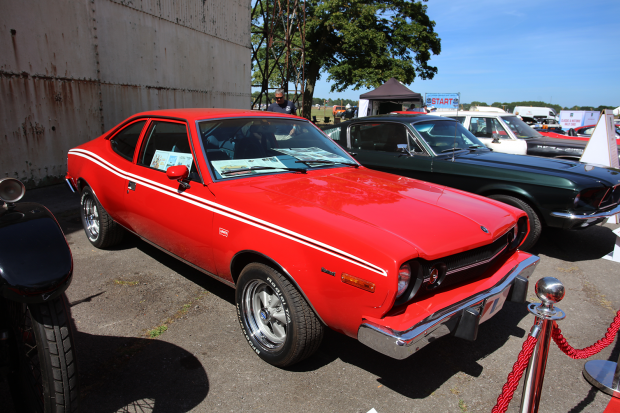 The British Leyland class, meanwhile, featured cars from across the group's history, with everything from a 1968 Triumph TR5 to a 1970 Mini Cooper 'S' and a 1976 Morris Marina 1.8 Special taking part. The class was won by Charles Porter with his early 1976 Triumph TR7, which was resplendent in dazzling yellow paintwork.

The Movie Car class proved immensely popular throughout the weekend, with a 1911 Vauxhall C-type Prince Henry – star of 2011 picture War Horse – alongside a 1974 Dodge Monaro police car from The Blues Brothers and a ’71 Plymouth ‘Cuda Convertible from Tim Burton’s Dark Shadows.

It was, however, the enduring appeal of James Bond classic The Man with the Golden Gun that won the day, with Nigel Jeffery’s 1975 AMC Hornet Coupe of the type from the film’s famous 360-degree twisting jump taking class honours.

A half-century of groundbreaking designs was celebrated in the Class of 1948 category, with everything from Aston Martin’s 2-Litre Sports to Land-Rover’s Series One and Tatra’s T600 Tatraplan forming an impressively diverse collection. The judges’ favourite, though, was the 1951 Jaguar XK120 of Christian Baker.

A fascinating selection of historic rally cars made up the final concours class, with several significant machines – such as Patrick Walker’s 1970 World Cup Rally Triumph 2.5PI, one of just four works cars built – taking to the field. In the end, it was the much-campaigned 1962 Triumph TR4 of Gareth Firth that captured the judges’ attention. 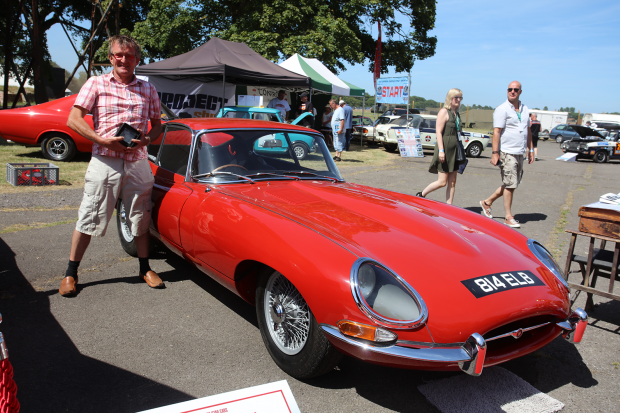 And that just leaves the overall award for Best in Show – an honour bestowed upon a 1962 Jaguar E-type driven by Sean Connery in the 1964 film Woman of Straw.

The beautifully presented 3.8 Series 1 coupé was the judges' overall pick, much to the delight of owner Lee Mynard.

Mynard acquired the E-type from his uncle when he was just 17 years old, and has slowly restored it over the years as and when could afford it. Incredibly, he only discovered that his car had appeared on the big screen after he spotted stills of the film online.

“I’m blown away and a bit overawed by it all," he said. "I didn’t know what to expect and can’t believe what a fantastic event it has been.” 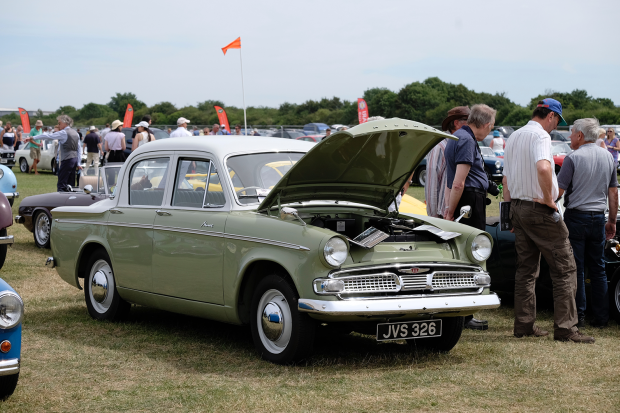 And so to the 'amateur' contest – AKA the People's Concours. This contest saw the judges shortlist a selection of vehicles from the many club displays and the dedicated Pre-'76 car park, with ticket holders then voting for their favourites over the course of the weekend. One car from each day was honoured, with an overall prize also being awarded on the Sunday afternoon.

Competition was fierce, but ultimately the public voted for a lovely 1960 Hillman Minx Series 3A owned by Dale Scutter on the Saturday, and a 1969 Ford Mustang Mach 1 owned by James Howell on the Sunday.

The Minx was also named the overall winner, taking the inaugural David Evans Trophy after topping the public vote. 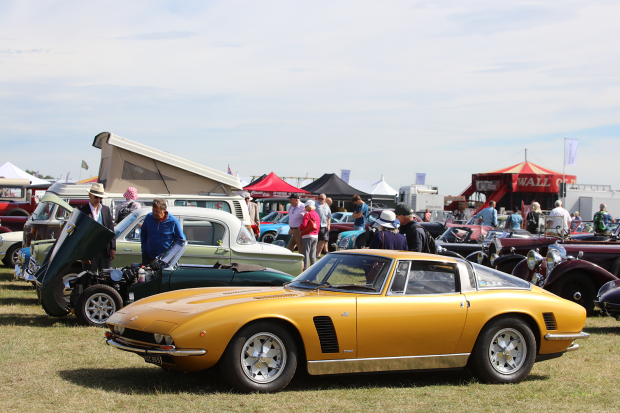 Outside of the contests there were plenty of other things to see.

Take the Pre-'76 car park, for instance: while ostensibly just a place for the public to leave their vehicles for the duration of the show, it became a must-see attraction in its own right. Where else would you find a sleek Iso Grifo sports car sitting mere feet away from a hefty Studebaker Golden Hawk?

The Brightwells auction was also hugely popular throughout the weekend. The firm took over the vast Hangar 113 for its 88-car-strong sale, with viewing on the Saturday and the sale on the Sunday. The biggest seller was a Riley-Amilcar special, which smashed its upper estimate of £80,000 to go for £118,000. You can read a full report on the auction here. 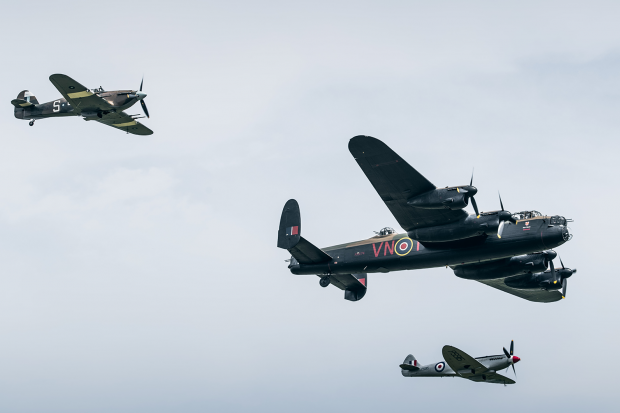 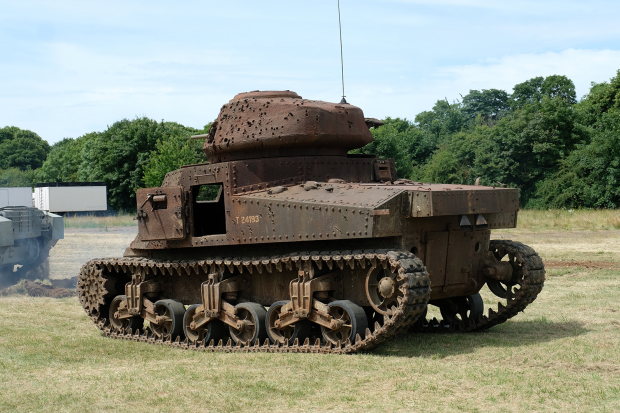 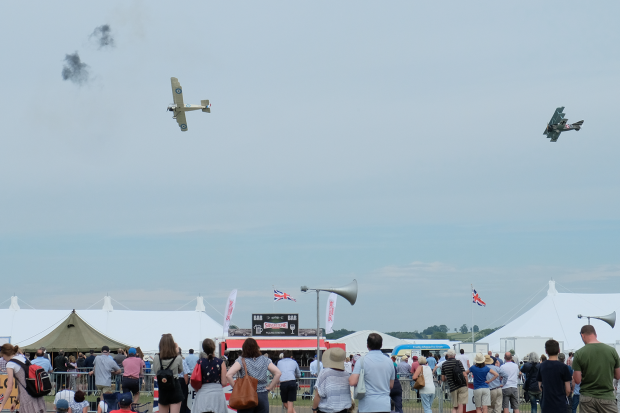 The military and air displays were similarly unmissable, with the planes in particular delighting the crowds.

The Lancaster bomber of the Battle of Britain Memorial Flight thrilled with steeply banked turns above the site, flanked by a Hurricane and Spitfire in a Merlin-engined trio.

And moving even further back in time, there was a spectacular WW1 dogfight, which saw German Fokker Dr1 and Junkers CL1 taking on Allied BE2c and Avro 504 amid the smoke of regular explosions.

The Show was also privileged to receive a visit from seven WW2 veterans, with two of them – Maurice Marriott (93) and Eddie Habberley (95) reliving their wartime service with the RAF by taking flight in a Tiger Moth.

“I haven’t been in a Tiger Moth since 1941,” said Habberley, who trained in the iconic biplane. “I’d forgotten how breezy it was up there! It bounced around something terrific but was really good fun.”

Memories were brought back for other veterans with a ride aboard ‘Hannibal’, a Sherman tank that was one of a number of military vehicles being put through their paces in addition to a brilliant static display.

Pick of the militaria for most visitors, however, was Carl Brown’s amazing Grant tank, still wearing the scars of being used as target practice with captured German ammunition during the war. 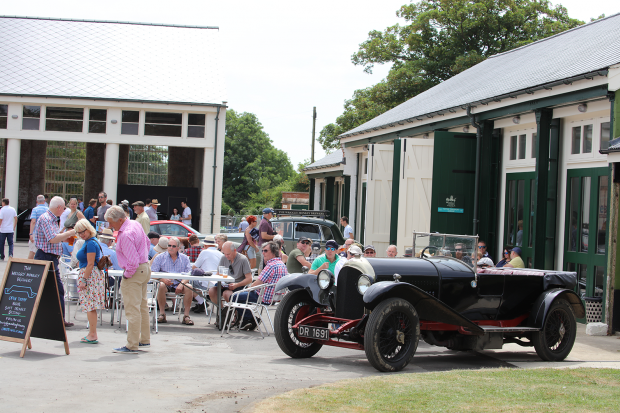 There was more to the weekend than just the live action, of course. For the first time at this event, the specialists of Bicester Heritage threw open their doors to welcome Show visitors into the fascinating ‘Technical Site’.

Showgoers could watch their skills at work, stop for a chat, or take advantage of Wriggly Monkey Brewery opening up for the weekend to relax for a beer in the charmingly restored hub of the former airfield.

In short, it was a huge success and a great way to spend the weekend. And the good news is, the Show will be back again – with the 2019 event due to take place on 22-23 June next year.

For details, see www.classicandsportscarshow.com – and to view a full gallery of images from the Show, click here.

In pictures: The Classic & Sports Car Show in association with Flywheel