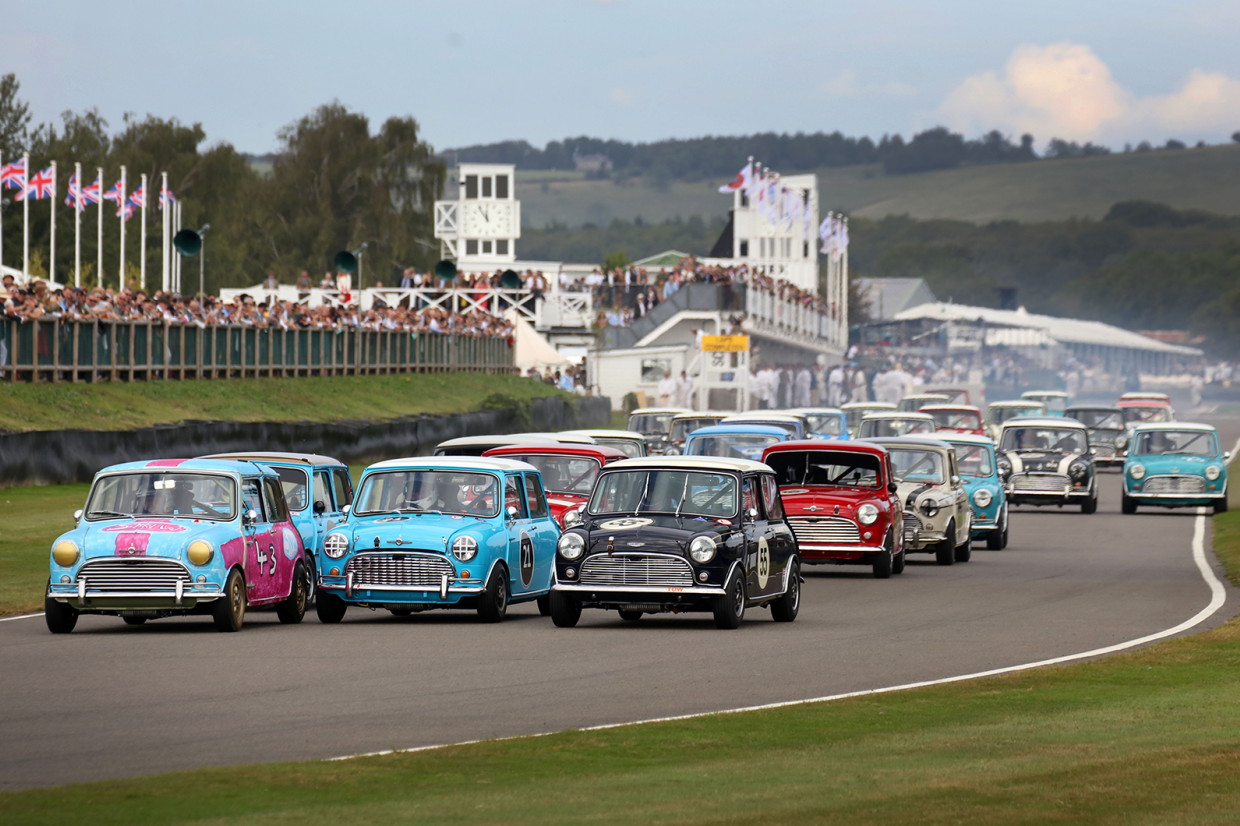 A sense of thanksgiving permeated the return of the Goodwood Revival, for the freedoms we’re able to enjoy once more and for those who’ve helped us achieve this.

The drivers and riders were thrilled to be racing in front of an also-grateful crowd, but this being Goodwood, this sentiment was also thoughtfully reflected elsewhere, historical and contemporary references blended in poignant tribute.

Of course, the stars of the 17-19 September meeting were on track, Sunday’s blue-riband Royal Automobile Club TT Celebration on a damp surface a reminder of the calibre of the competition. All eyes were on the outside of the all-Cobra front row and 2009 Formula One drivers’ champion Jenson Button who’d made his historic racing debut on the event’s opening day. With teammate Alex Buncombe they were starting third, but Button said his first aim was to make it around turn one at Madgwick.

That he achieved, albeit having dropped to ninth, the volume around him on the line, he later conceded, causing him to fluff the start and change from first to fourth. But learning and settling into the car, and working out where the grip was on the greasy Tarmac, he was soon setting fastest laps and scything through, including a brave move on fellow Sky F1 commentator Martin Brundle in Bobby Verdon-Roe’s Cobra on the outside of St Mary’s.

Out front, Darren Turner got the jump from polesitter Bill Shepherd, but five minutes into the hour-long contest his four-second lead evaporated during a short safety-car period to recover Rupert Clevely’s Jaguar E-type. Turner and Shepherd pitted at the same time, handing over to Oliver Bryant and Romain Dumas respectively, but the latter crew’s faster stop saw them claw back the 4.9 sec deficit and take the de facto lead.

Having reclaimed third, Button was promoted to the lead and pitted two laps later, just as a second safety car came out after the Mike Jordan/Mike Whitaker TVR Griffith 400’s off-track adventures. With the order Dumas, Bryant, Buncombe, a third safety car bunched the field up again, but soon after racing resumed Buncombe retired with a misfire and it transpired that the Dumas/Shepherd stop wasn’t just fast, it was too fast, a 21-sec penalty demoting them to fourth, an emotional Bryant thrilled to take his and the car’s first TT win – although co-driver Turner couldn’t collect his laurels, because he had a flight to catch. 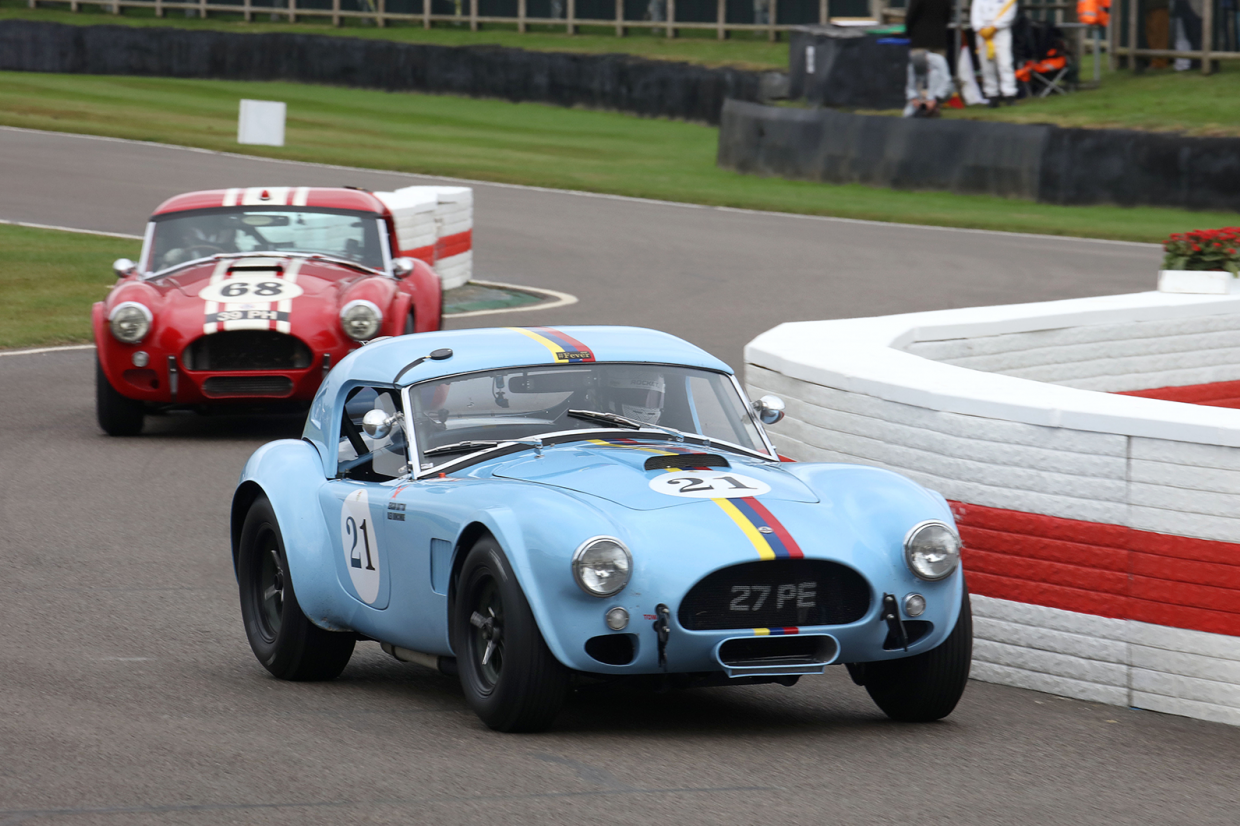 The Button/Buncombe AC Cobra made an impressive comeback

Action started with Friday evening’s Stirling Moss Memorial Trophy for pre-’63 closed-cockpit GT cars, Alex and Martin Brundle on pole in Gary Pearson’s E-type, but the similar car driven by Harvey Stanley got out front and away, as veteran John Young span off from third on the grid, Brundle Snr tussling with the Jon Minshaw E-type.

The top three pulled clear of Whitaker/Jordan’s former drag-racing star ‘Dragonsnake’ Cobra, but there was post-pitstop drama as Alex Brundle span on his own oil and found the barriers, and with two other cars also off the safety car was brought out.

In the 10-minute sprint to the flag, Phil Keen was leading in the E-type started by Minshaw, yet with brakes glowing in the fading light and six minutes to run, James Cottingham got ahead and won by 2.6 secs.

Both in their maiden Goodwood races, Button/Buncombe who started 19th, finished seventh in an E-type. 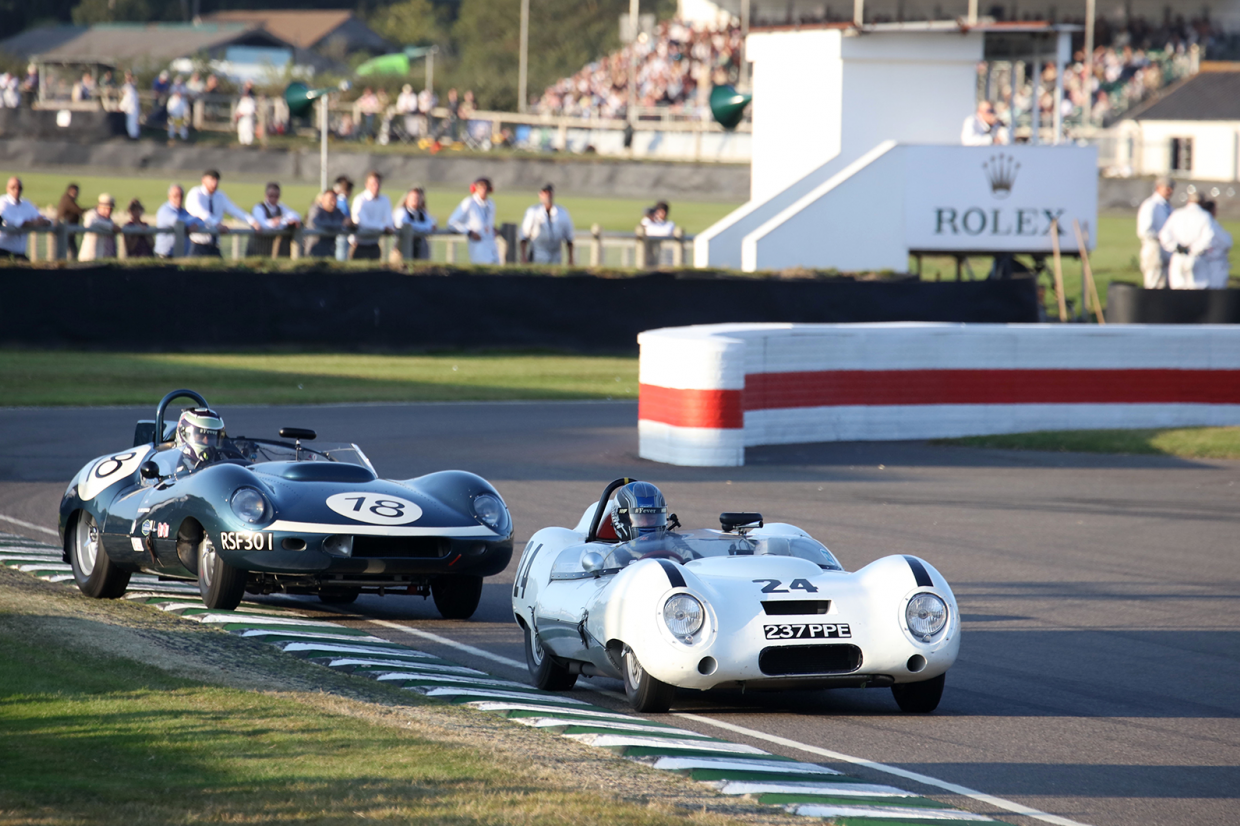 Translating pole into victory in the Festival of Britain Trophy that kicked off Saturday’s racing might sound more straightforward for Mark Gillies in Richard Skipworth’s ERA R3A, but he had to fight back to the front past David Morris in R11B, then Michael Gans (R1B) reeled him in during the closing stages, Gillies checking over his shoulders on the final lap as the two swapped places; he held on to win by 0.578 secs.

It was somewhat easier for Andy Middlehurst come the Glover Trophy, who started from pole and in dominant fashion claimed his seventh Goodwood win.

Another poleman won in the Sussex Trophy, but James Cottingham had to overhaul Roger Wills and his fast-starting Lotus-Climax 15 to get the Tojeiro-Jaguar its first Goodwood victory.

It was tight between Peter de la Roche and Andrew Hibberd in the Chichester Cup, before Hibberd span at Madgwick, de la Roche the winner by nearly 21 secs. 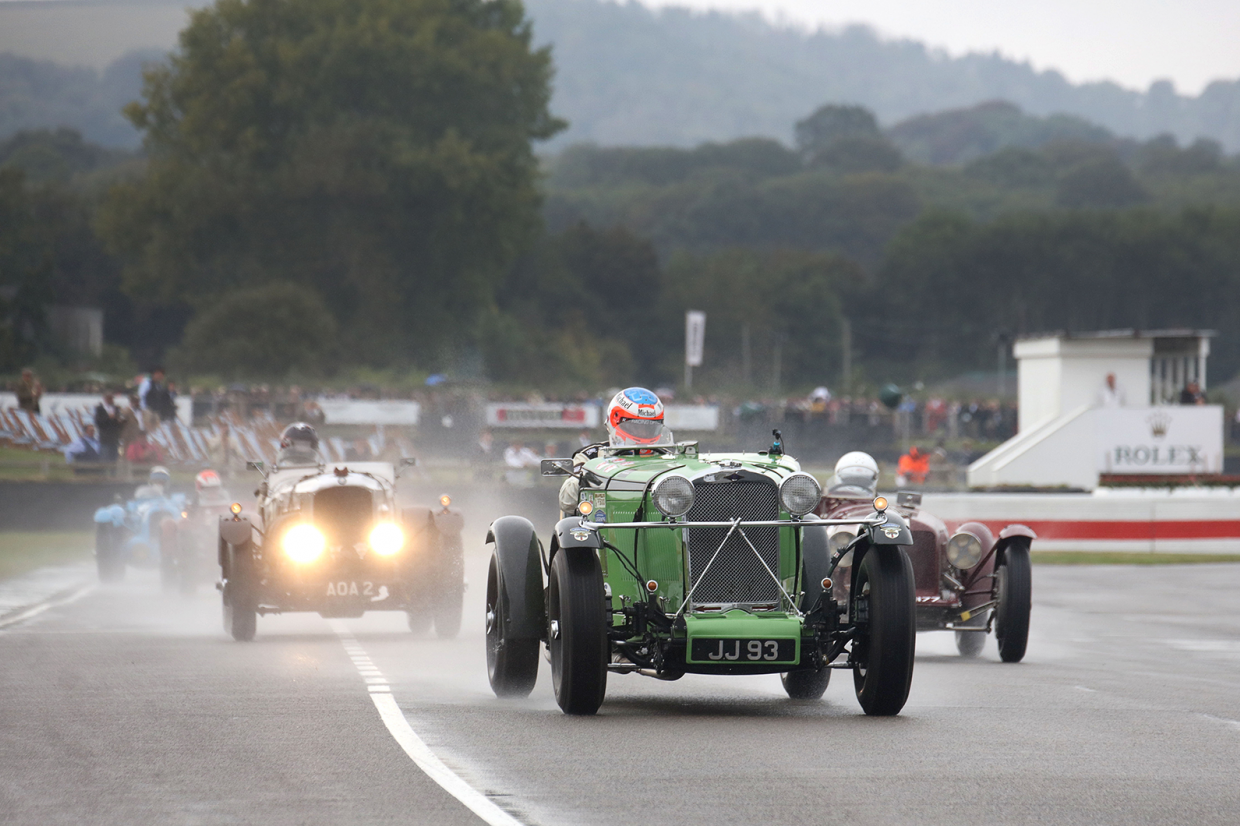 It was wet for the pre-war cars

Sunday’s Richmond Trophy began damp and got wetter, but that didn’t stop Tony Wood blasting through from fourth to lead in the Tec-Mec Maserati. After Ben Mitchell had passed Miles Griffiths, he went on to take the lead, Wood falling back to fourth. And while it was a comfy 6.822-sec winning margin for Mitchell, Griffiths’ and Will Nuthall’s podium places were decided by just 0.168 secs at the flag.

Rain also affected the two-driver Brooklands Trophy, a sideways affair in which Patrick Blakeney-Edwards led a Frazer Nash 1-2 after a lap in ‘The Owlet’ from the TT Replica of Duncan Pittaway.

Blakeney-Edwards handed over to Mini specialist but pre-war rookie Nick Swift, who was soon caught by the TT Rep now in the hands of Eddie Williams. Williams confessed that, given the conditions, he was relieved to see the chequered flag, but delighted that the Brooklands Trophy was won by the only car on the grid to have won at Brooklands.

The all-Mini John Whitmore Trophy was always going to be a crowd-pleaser and after a tyre-smoking start it was four wide going into Madgwick, Swift emerging as the leader on the weekend he announced his retirement from racing.

Andrew Jordan soon changed this when he jumped into Swift’s car, later saying, “the car felt really good so I thought I’d crack on straight away” – he took the flag with a 24.026-sec advantage from Chris Middlehurst and double Le Mans winner Dumas, the latter racing a Mini and indeed a front-wheel drive car for the first time. 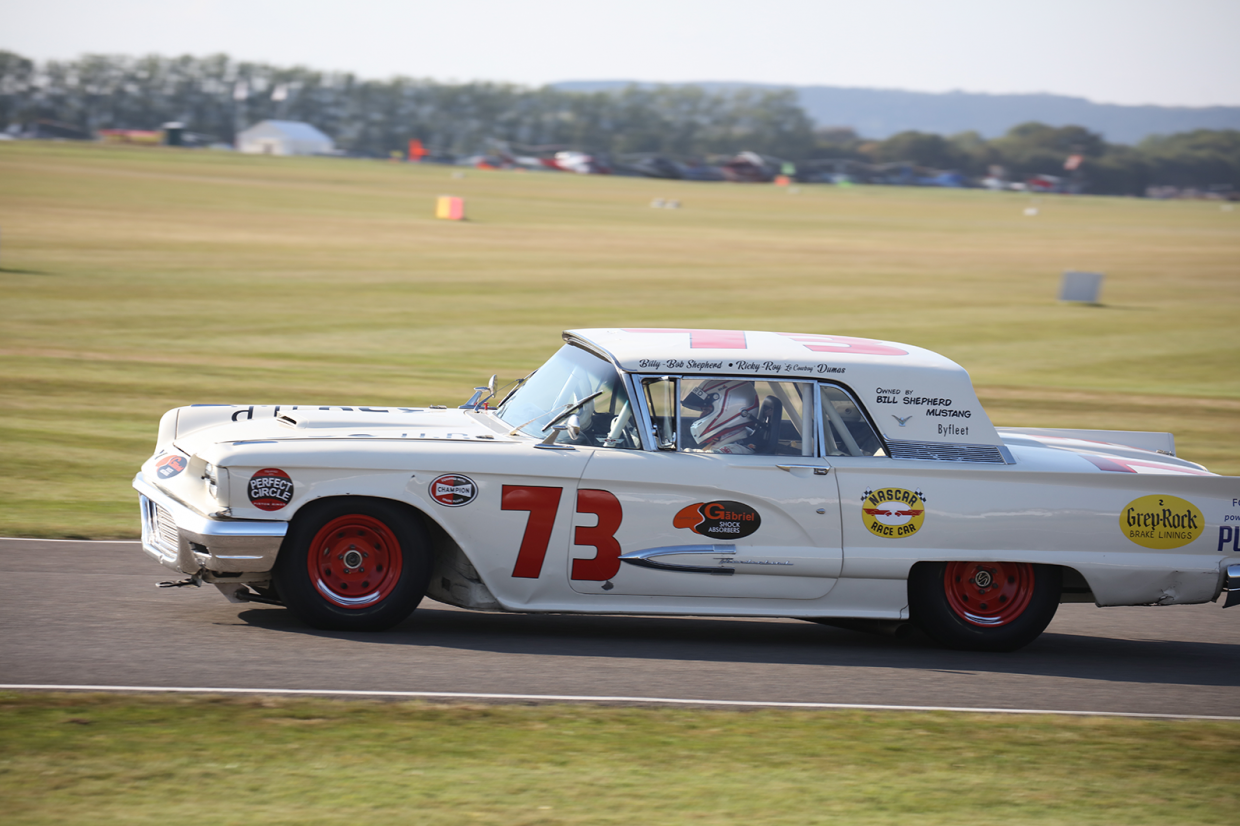 The ever-popular St Mary’s Trophy didn’t disappoint with a 12-row race one grid headed by Andrew Jordan in an Austin A40, but it was Dumas in the 7-litre Thunderbird who, perhaps unexpectedly, had the grunt off the line, chased by the A90 of André Lotterer and Emanuele Pirro (Alfa Romeo Giulietta TI).

There was no catching Dumas, despite the car’s tyres being worn to the canvas in the closing stages, but Jordan, having fallen to fifth, fought back to claim the runner-up spot, Marcel Fässler third in another A40.

And the flight of the Thunderbird was unstoppable in race two when owner Bill Shepherd took over. Starting fourth, polesitter Matt Manderson was the early leader in an A40 until Grant Williams powered by in the Mk1 Jaguar. Tom Sharp’s pretty BMW 700 sadly ending its weekend in the barriers started a long safety-car period, after which Shepherd was on the charge, eventually overtaking Williams on the Lavant Straight, meaning it was two race wins and combined victory for the Dumas/Shepherd Ford.

And there was drama to the end at the 2021 Goodwood Revival. A super start from third gave David Hart (Maserati 300S) the lead in the Freddie March Memorial Trophy, from Steve Brooks’ D-type and Gregor Fisken’s HWM-Jaguar, the three nose-to-tail.

But when the leader got out of shape and dropped a wheel on the grass at Madgwick, the others had nowhere to go and Fisken was forced to retire. Nevertheless, Hart won, the wounded D-type more than 36 secs adrift in second.