Promoted: Night at the Museum

By John Mayhead for Hagerty Insurance UK
Sponsored
| 31 May 2018 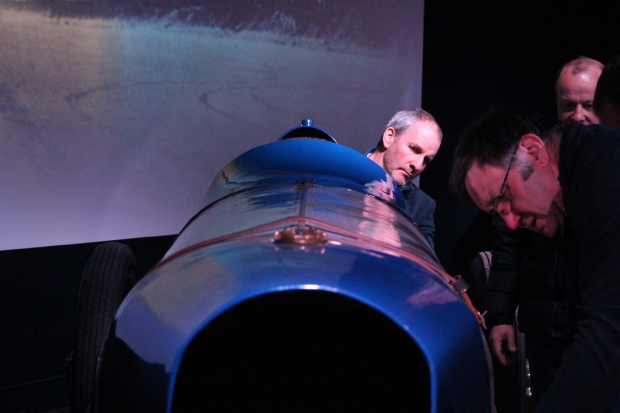 “We’re going to spend the night in the museum,” Marcus, the Hagerty Marketing Director told me. “We’re sleeping in the cars. Do you want to come with us?”

“Oh…” he continued. “And we’ll be joined by Chris Barrie.”

Working for Hagerty has given me some amazing experiences, from standing on the pit wall at the Goodwood Revival to interviewing my racing driver heroes, but my recent overnight stay at Beaulieu National Motor Museum must rank as one of the strangest and yet most wonderful.

The concept was pretty simple: we (Marcus, Chris, MD Angus Forsyth and myself) would meet at the museum after it closed, have dinner with Beaulieu staff members who would then give us a guided tour, after which we would set up camp beds and sleep in or between the cars. Few cars, we were told, were off-limits.

The evening started ominously. I decided to make the most of a break in the weather and drive my 1976 Alfa Romeo Spider the hour-or-so to Beaulieu.

The ‘break’ lasted all of about 15 minutes, after which I was caught in a torrential rainstorm combined with horrendous traffic on the M27 – not really enjoyable classic weather. Added to this, a steady drip reminded me that I had not got around to fitting the front hood seal at the end of last summer. 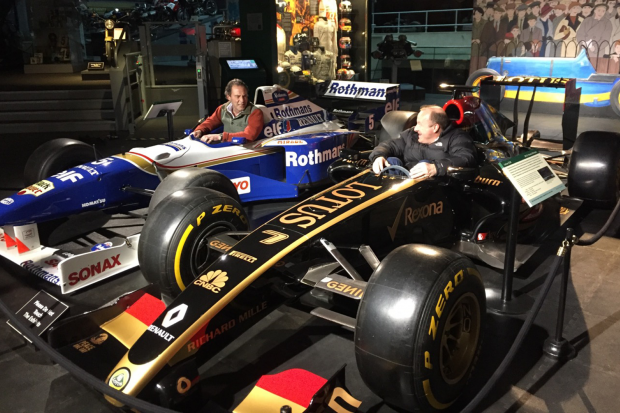 After two hours I arrived, pulling up next to Marcus’ Volvo XC90 and joined seconds later by Chris’ Land Rover. It was like some bizarre Top Gear challenge, which was apt given the location.

We were met by the Beaulieu 100’s ever-glamorous Heather Jackson, who introduced us to our evening’s guide and overnight chaperone: Michael Gillet, known as ‘Sticksie’ on account of his walking stick. He encouraged me to park my leaking Alfa under the front canopy of the main entrance; I took him up on his offer.

Dinner was great fun, not surprising given the company. Chris is not only a very well-known actor (Red Dwarf, Tomb Raider and The Brittas Empire) but also a very keen and knowledgeable classic car and bike enthusiast who has a particular soft spot for Jaguars.

Angus had just completed the Scottish Malts, Heather regaled us with tales from her childhood in Rhodesia featuring her father’s attraction to Italian cars, and Sticksie told us all about his ‘reduced’ collection of 20 (or was it 30?) classic bikes.

Then it was time to go back to the museum. Entering the main hall with lights dimmed, the atmosphere was immediately magical. We split up, each just taking in the history around us. Sticksie joined each of us, his expert commentary adding the human stories to these great machines. We marvelled at the extreme light weight of the Porsche 917K door, a car that competed during the 1970 and ’71 seasons and starred in the film Le Mans with Steve McQueen.

We were allowed to squeeze into the cockpit of some of the F1 cars on display: Angus in Graham Hill’s Lotus 49 and Marcus in Damon Hill’s Championship-winning Williams FW18; I chose Ayrton Senna’s Toleman TG184 from 1984. 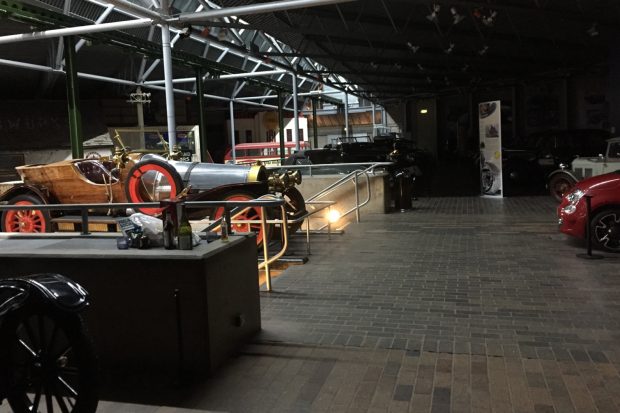 Next, we explored some of the more unusual vehicles in the collection with half an eye on the potential sleeping opportunities: the Mini Outspan Orange, with its wonderful interior, was a firm favourite, as was Chitty Chitty Bang Bang, the car that had starred as the hovercraft version in the movie.

Finally, just after midnight, we moved into the centre of the museum and its greatest treasures: the land speed record cars. Donald Campbell’s 1961 Bluebird was off-limits, but Sticksie’s narrative of the record attempt raised the hairs on our necks. Henry Seagrave’s 1927 Sunbeam 1000hp was next: a huge beast of a car that recorded 200mph for the first time. Next to it was his streamlined 1929 ‘Golden Arrow’ with a 930bhp, W12 Schneider Trophy Type Napier Lion aero engine that achieved a new 231.362mph record. Then it was on to the jewel in the crown – Malcolm Campbell’s Sunbeam ‘Bluebird’, the first car to reach 150mph, a record he set at Pendine Sands in 1925.

Its survival is a wonderful story; twice sent for scrap, it sat under a tarpaulin for years at the back of a vehicle yard, the owner too mindful of its history to cut it up. Now restored to its land speed record coachwork, it is still very much a living machine, often driven and displayed at various events. At around 2am, we decided to call it a night. We made up our beds and all slept soundly until the dawn. 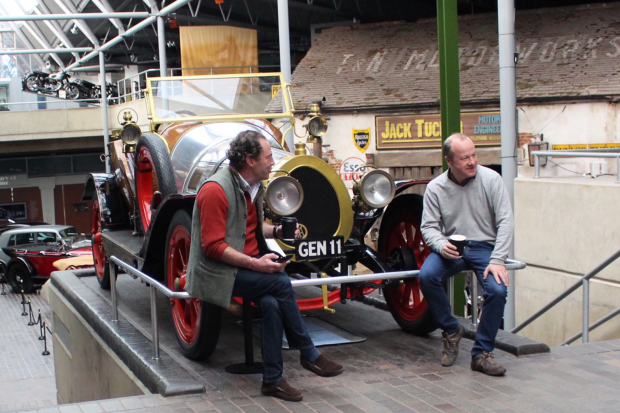 The next morning - coffee and messages

The following morning, we met for breakfast and discussed the experience. Marcus slept next to the 25hp, 4-cylinder de Dietrich in which he completed his first London to Brighton run back in 2011. “It was absolutely the place to be,” he said. “I remember the weather was absolutely awful but we had a great time. At one point we had this incredible nervous laughter as we hit the A27 down near Brighton; I had my hands over my face as the rain was coming in so hard it was like being hit by bullets. But brilliant memories… coming on to Madeira Drive as the clouds parted and the sun came out to warm us all up again was wonderful."

Chris then commented, “The highlight for me had to be the time we spent with the land speed record breakers. Just to be in a room with those incredible machines that screamed along at massive speeds. And here they are, just resting. With Sticksie, we had the privilege of getting right up close to them.”

Angus agreed. “I’m not sure it’s sunk in, actually. It makes you realise just what they went through… for the pioneers it was going to end one of two ways, either you got out of the car at the other end of your own volition, or you were in bits.” 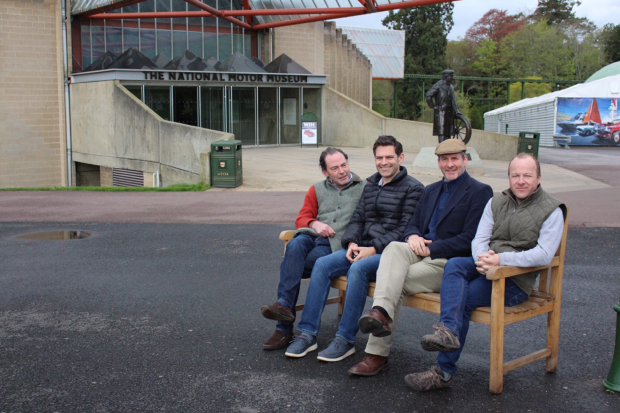 Personally, the experience was one I shall remember for a long time for a number of reasons. Firstly: time. Often a museum visit has a time constraint imposed; whether you need to be back to pick up the kids or you’re looking at an exhibit that someone else wants to view, there always seems to be a pressure attached. This evening we had nothing else to do; Sticksie generously gave up his time and spent hours talking us around the museum. We had time to really get to know the cars, to really look at them from every angle.

Secondly was the company. Angus, Marcus, Chris, Heather and Sticksie all had one thing in common: an immersive love of motoring. It was amazing being around such entertaining, passionate people. Thirdly was the proximity to the cars. My favourite had to be the Porsche 917. I’ve loved these cars for many years and seen them at Goodwood but this time I felt I had the time to get to know them. So, I think that was what made the evening magical: we actually got to know the cars. They weren’t just a display, but through their stories somehow came back to life.

The great news is that Beaulieu is considering allowing other small groups to do as we did; in my opinion that’s a wonderful idea.