Battle for the boardroom: Austin 3 Litre vs Ford Executive vs Vauxhall Viscount 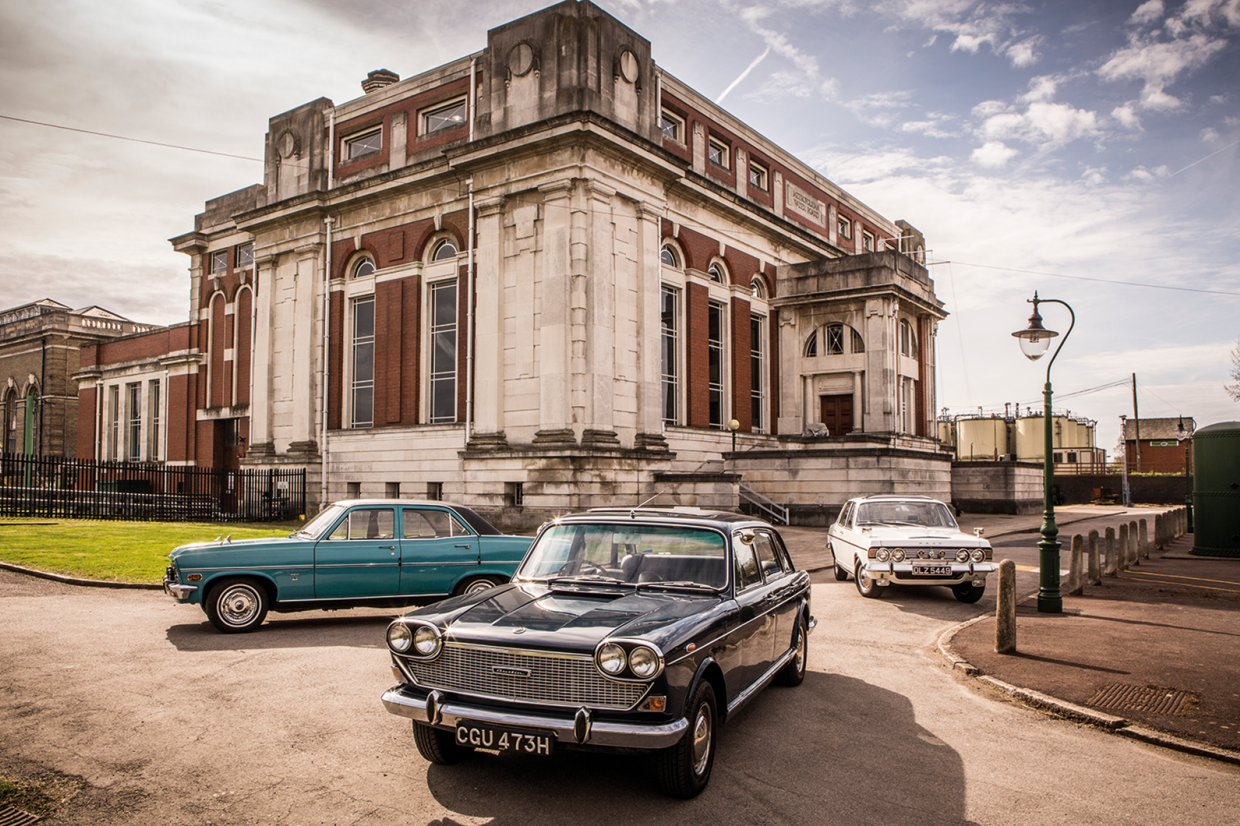 When the Austin 3 Litre made its debut in 1967, it was a time of transition for British ‘director class’ transport.

The setting for this tribute to a lost world of expense account cigars and Luncheon Vouchers, fittingly, is Kempton Steam Museum, the home to an incredible pair of triple-expansion engines, and under the A316 flyover – a point where tradition meets post-war modernity.

The Ford Executive and Vauxhall Viscount represent the England of brutalist architecture, Colin Buchanan’s Traffic in Towns and ‘urban clearways’, while the Austin looks as though it would be happiest in the driveway of a mock-Tudor 1930s villa.

Yet, beneath that sober coachwork, the luxury saloon from Longbridge was a deceptively sophisticated design. 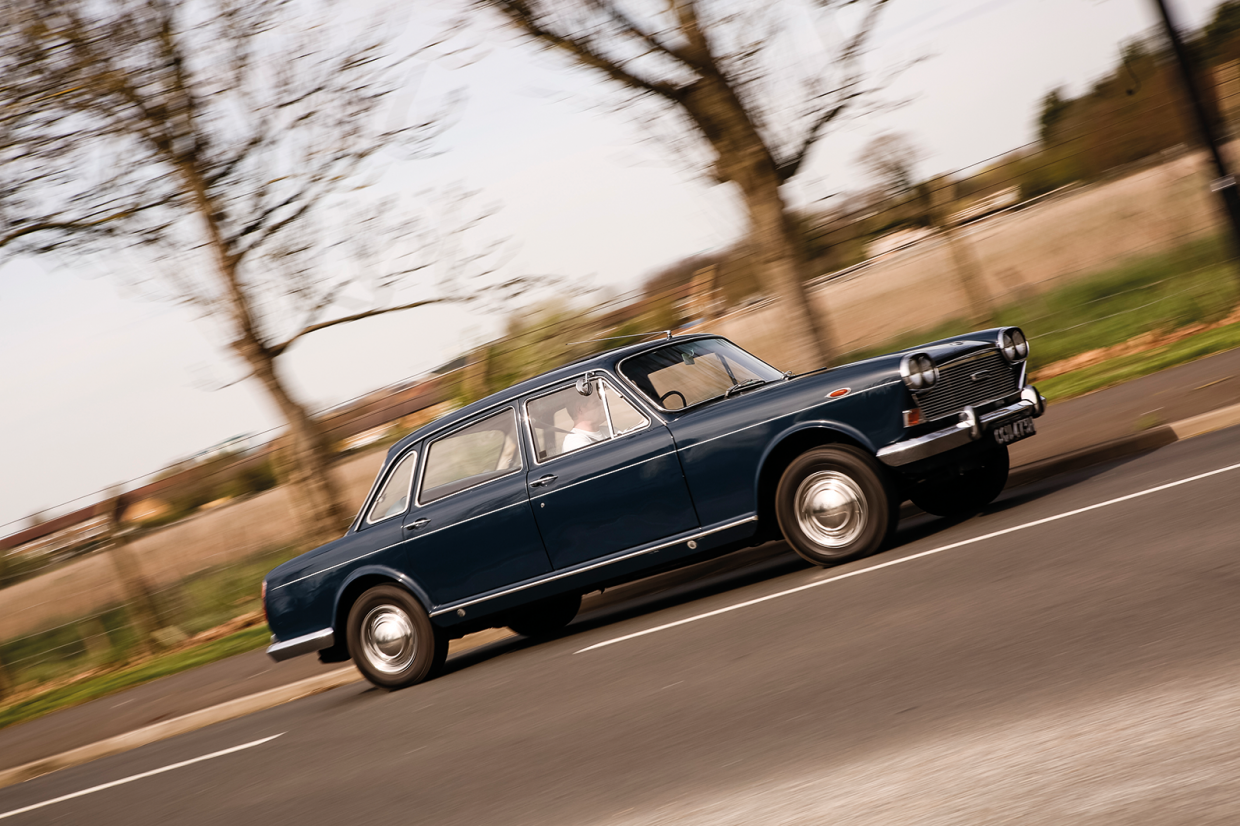 Plans for a successor to the A110 Westminster commenced in 1963, combining the central hull and doors of the forthcoming 1800 with an elongated nose and tail.

Unlike the ‘Landcrab’, the large Austin would be rear-wheel drive because its intended customer base was regarded as too conservative for front drive.

Morris Motors refined the C-series engine with a seven-bearing crank, and a modified version of this unit would power the MGC.

Shortly before the London Motor Show, Raymond Baxter, who was in charge of publicity for the British Motor Corporation, presided over the launch of the 3 Litre to a somewhat underwhelmed motoring press. 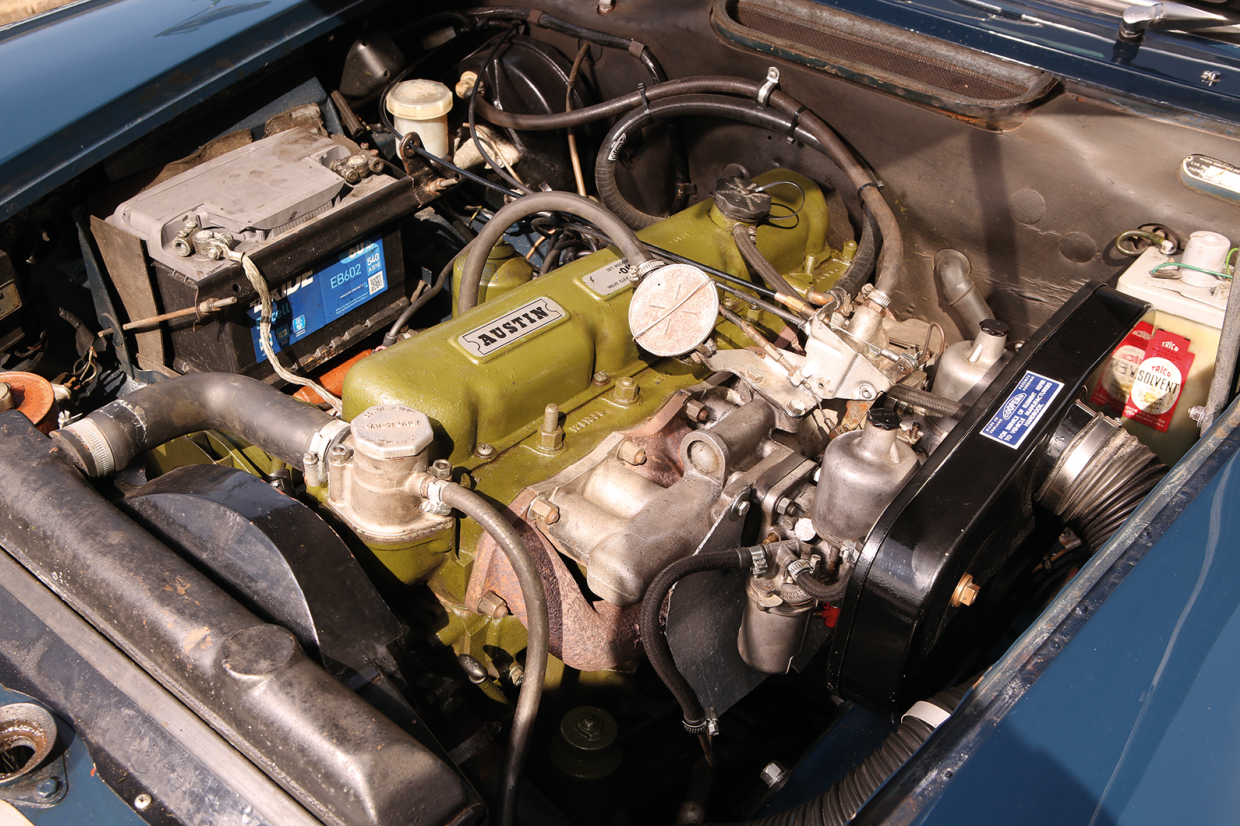 Over the next few months, the factory issued a trial run of 100 oblong-headlight Austins to select customers. By the time production began, though, the 3 Litre sported twin round lamps.

It was advertised in the great British tradition of appealing to the insecure and/or aspirational middle-class driver as the perfect vehicle for a morning game shoot.

‘In your life, you need a big car. Not some cheap mutton dressed as expensive lamb,’ claimed the text, the inference being that the 3 Litre was a motor car too innately prestigious to require any extraneous decoration.

The Austin’s launch came in a year about which there is still too great a mythology; one of the biggest selling records of 1967 was by The Seekers and in some parts of the UK the 1950s had only just ended.

In Carry On Camping, we never see the car driven by Terry Scott’s frustrated businessman, but I remain convinced that it was a Damask Red 3 Litre. Production ceased in ’71 after just 9992 units, seemingly a casualty of its own idiosyncrasies and a changing market dominated by the Rover and Triumph 2000s. 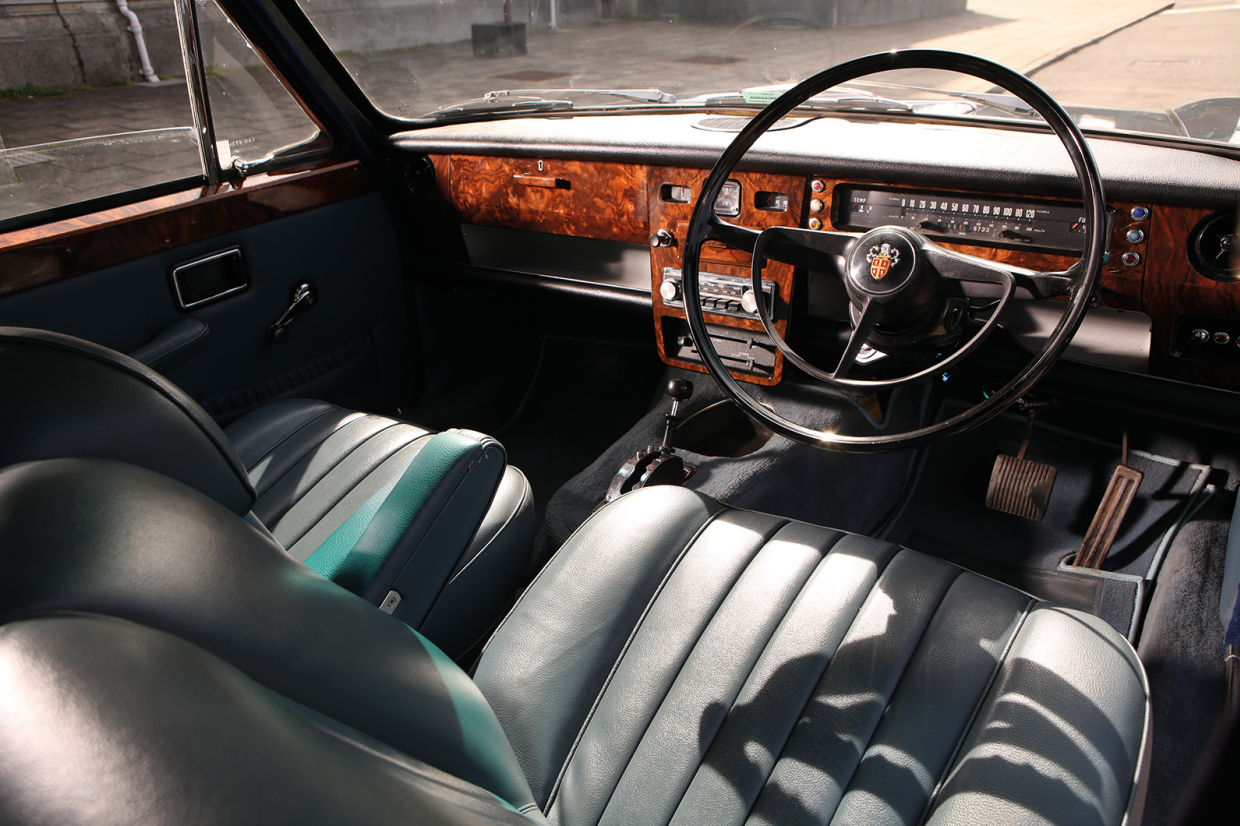 It is traditional wood veneer and leather inside the Austin

Today’s perspective, however, the Austin appears to be an imposing machine with a body that is arguably better proportioned than the Landcrab.

The styling is less redolent of the late 1960s than of the previous decade, but the same could be said of the Rover P5B and the Jaguar 420.

In many respects, the 3 Litre marked a true watershed for BMC: it was one of its last models prior to the merger with Leyland, a fascinating conflation of the Corporation’s advanced products and its more conventional designs.

Beneath that formal appearance was a sophisticated Hydrolastic suspension set-up combined with self-levelling at the rear, making the big Austin an incredibly comfortable long-distance cruiser.

The roads to Kempton are not the smoothest, but riding in Neil Kidby’s 3 Litre automatic with the Webasto roof open is akin to gliding along to a celebrity opening of the local Fine Fare. 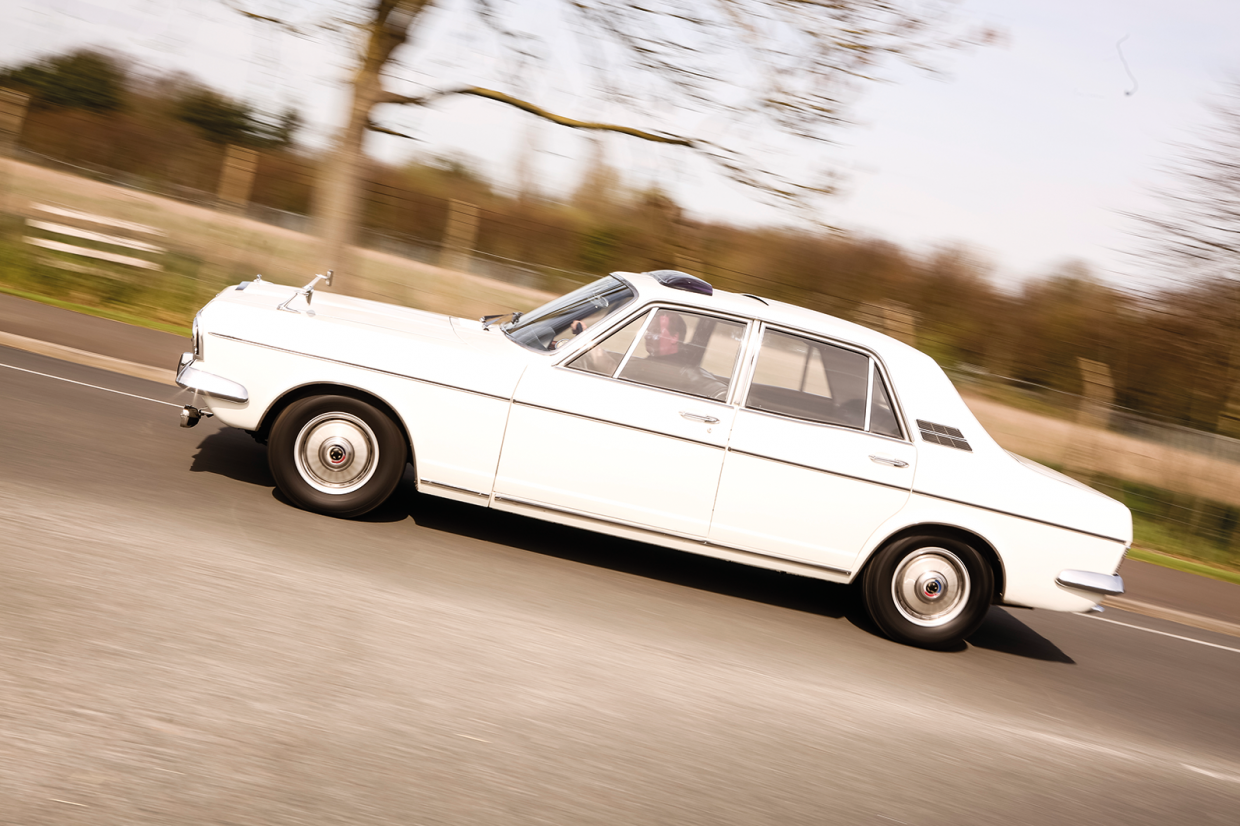 Kidby is the author of the book The Story of the Austin 3 Litre and he makes a compelling case for BMC’s most misunderstood car: “It was certainly technologically superior to its rivals.”

His 1970 example is a very likeable big saloon rather than the white elephant of popular myth.

Having elements in common with the Landcrab need not have been a sales drawback for the 3 Litre; the bodies of the Ford and the Vauxhall resemble their cheaper stablemates just as closely.

That said, the Executive and the Viscount both featured clever detailing that gave them a prestigious and distinct image.

They also served as an incentive for any driver of a Zephyr 4 or a Cresta Standard to climb the corporate ladder.

An array of upmarket variants may well have boosted the 3 Litre’s profile, but the new post-’67 Leyland management frowned upon the proposed Vanden Plas and Wolseley models. 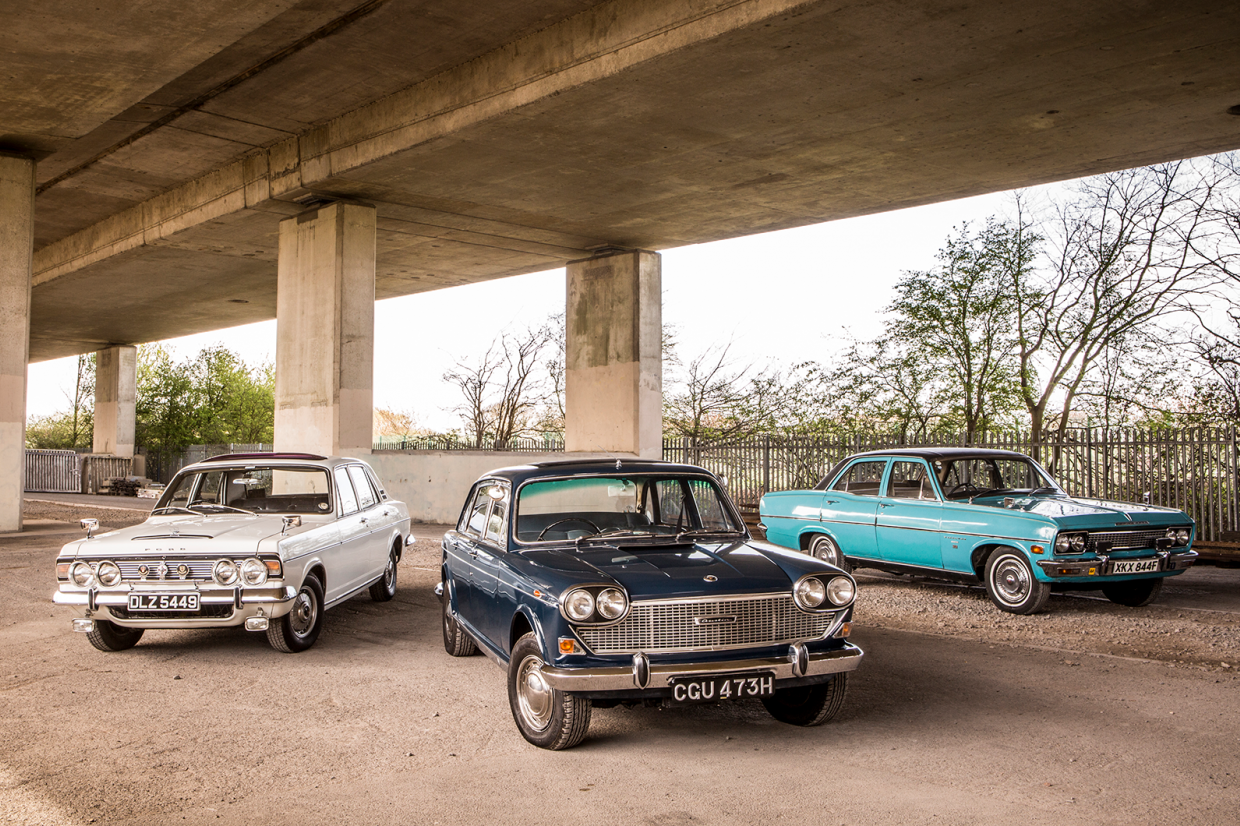 The cabin was a major selling point with each of these cars, and the Austin was nicely but not extravagantly appointed.

After 1968, leather was replaced by Ambla and the Mini-derived flashing indicator stalk struck an unfortunate note of pathos.

Meanwhile, to enter ‘the distinguished world of the Executive’ is to encounter pleated hide-upholstered armchairs that give the effect less of a gentleman’s study and more of a director’s suite atop a West End skyscraper.

The Ford had little truck with the term ‘restraint’, for a sliding roof, fog- and spotlamps, power-assisted steering and a radio were all standard fittings.

Dagenham’s first executive-class offering was an ultra-deluxe version of the last-of-the-line Zodiac Mk3, but by 1965 those canted tailfins still conveyed an air of the infamous 2 I’s Coffee Bar and all-night skiffle sessions. 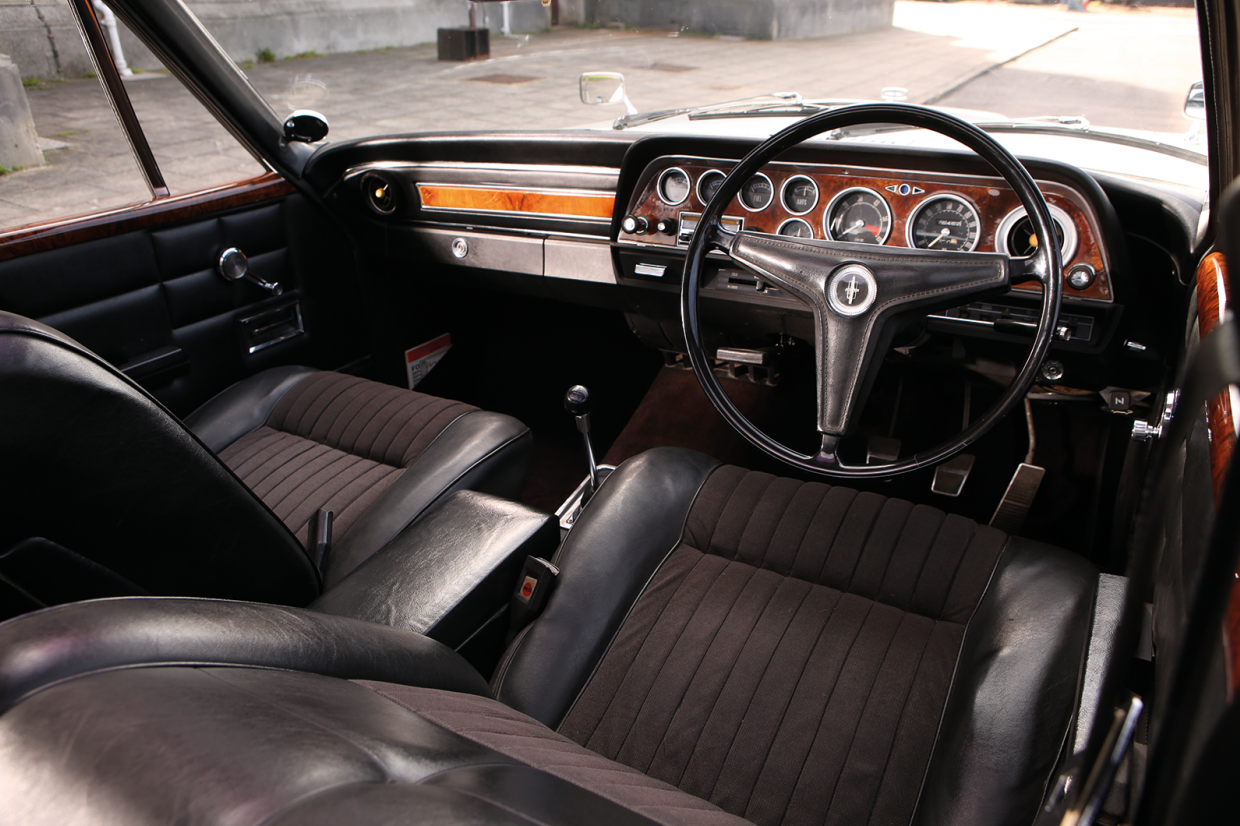 The Ford’s sporty set of dials and rare cloth inserts

The unveiling of the Mk4 in April 1966 introduced a far more formidable big Ford, with Harley Copp’s bold styling reminiscent of a scaled-down Lincoln Continental intended for British roads.

There was a choice of three engines – a 2-litre V4, plus 2.5-litre and 3-litre V6s – and the Executive arrived in October of that year; it was a car in which ‘luxury can truly be taken for granted’.

To promote the Mk4, Ford commissioned the PR film Mark of Distinction, which inferred that a Zephyr or Zodiac was at home in ski resorts or building sites alike, providing luxurious, carefree motoring, to the accompaniment of a very ’60s vibraphone.

Dealers could boast of the all-disc brakes – a first for a British Ford – and independent set-up, but Motor found that there was ‘room for development in weight distribution and in matching the front suspension characteristics with those of the rear’.

Radial tyres were fitted the following year, along with revised geometry, to help alleviate these issues. David Layton, who owns ‘our’ 1970 car, says: “It is a pleasure to drive – the bigger the better – and people just move out of the way to let you through!” 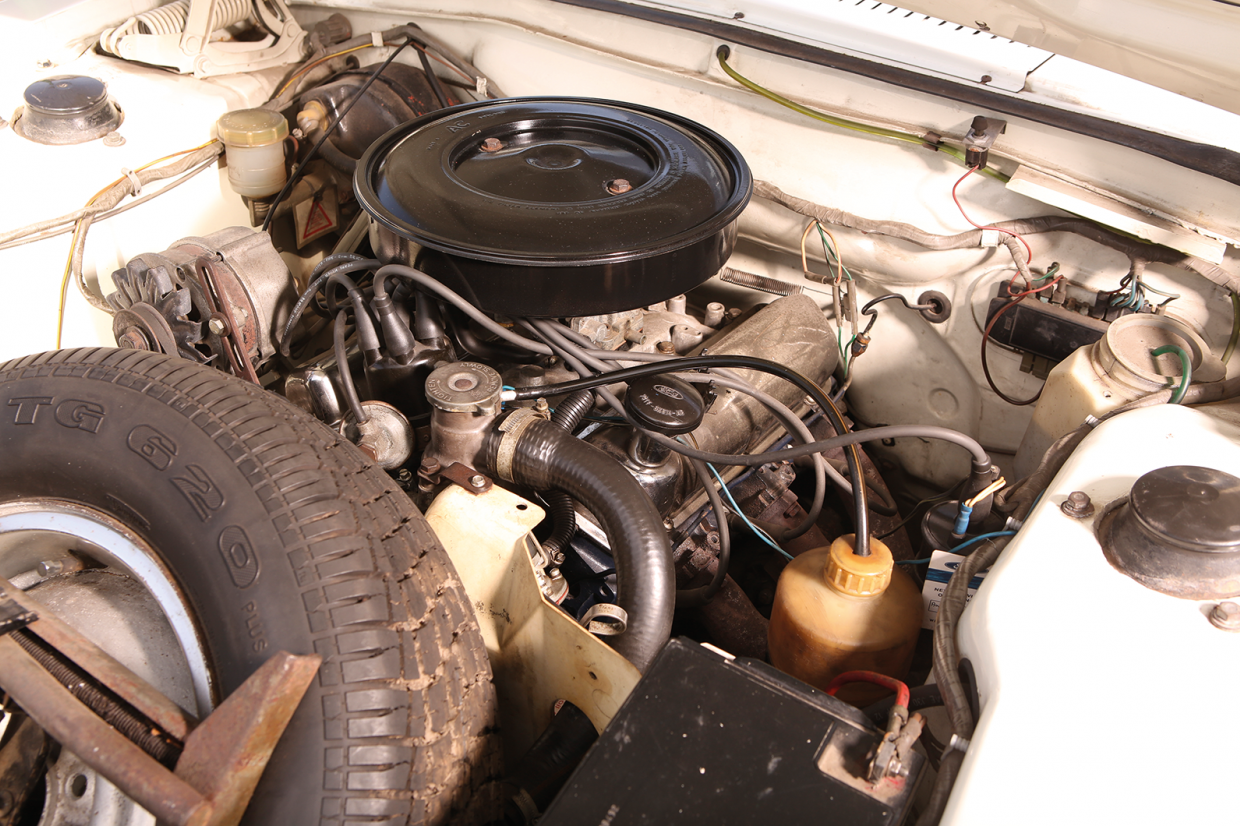 A coachline and extra brightwork helped to distinguish the Executive from lesser Mk4s, while that square nose looks ready to demolish any other vehicle that dares to cross its path.

They were normally fitted with automatic transmission, although Layton’s handsome example has the rare alternative of a four-speed manual gearbox and, equally unusually, the seats have the optional cloth inserts.

The Ford is the only member of the trio fitted with a rev counter, yet the Executive has no pretentions towards sporty driving.

It was the vehicle for the property developer to power-steer up the M1 towards his latest concrete abomination while muttering about the unnecessary new 70mph speed limit.

After the demise of the Mk4 in ’72, no subsequent European Ford ever had the same louche menace. 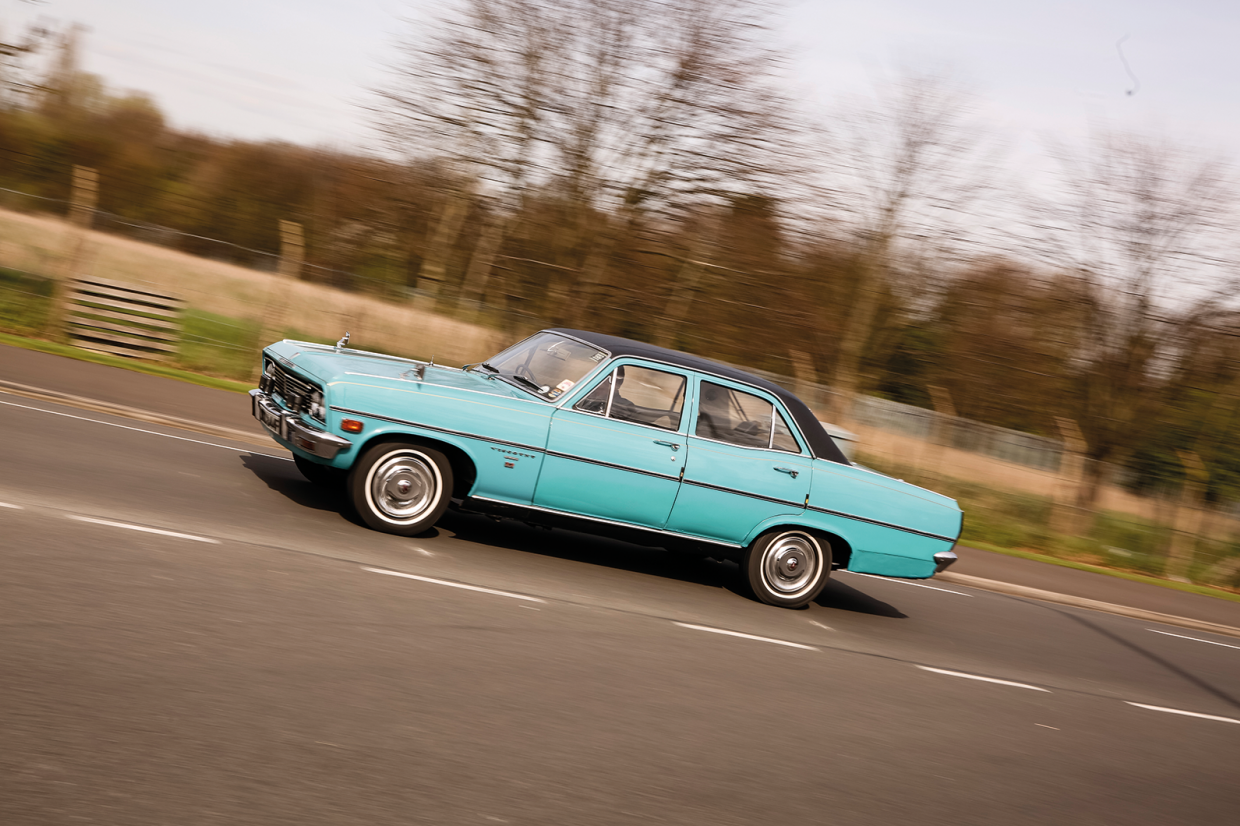 The Vauxhall Viscount has something of the Chevrolet Impala about it

And then there is the Viscount, which had a feature that would have been truly remarkable on its debut in 1966: electric windows as standard.

Just over 50 years ago, you could still buy a new British car without a heater, so ownership of a Vauxhall where all four panes could be lowered at the press of a button was on par with being an ITC international man of mystery.

Plus, when you considered the leather upholstery, vinyl roof, heated rear screen, power steering and Powerglide transmission, it was obvious that here was a car for ‘people who expect only the very best’.

The dealers’ sales guide suggested surveying the locale for any rivals to ‘jot down addresses’ at which ‘competitive models are obviously at home’. 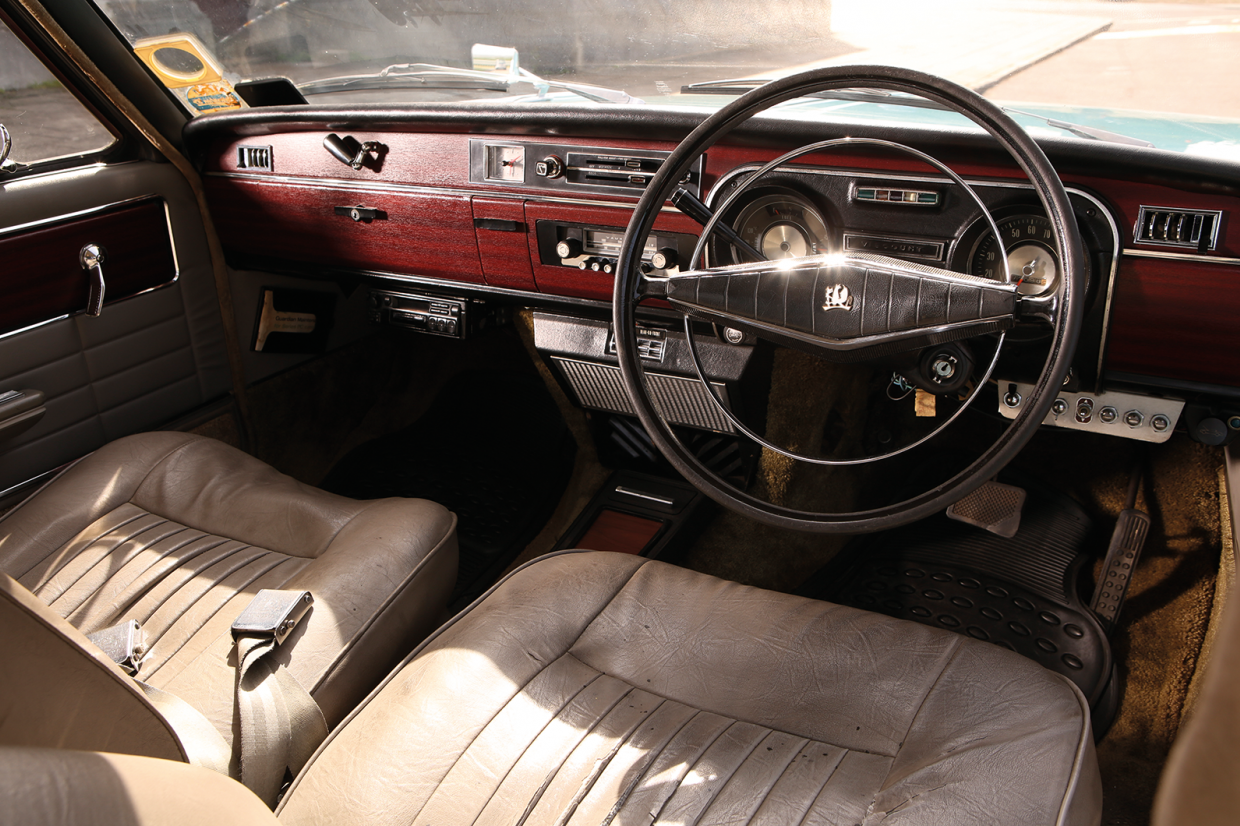 There’s an American feel inside the Vauxhall

The PC-series Cresta was introduced in the autumn of 1965, powered by a 3.3-litre straight-six, and the line-up was joined by the Viscount in June 1966.

Radford Coachworks had converted the PB Cresta, but the flagship PC was to be a factory offering – one that was perfectly named.

The Austin was going to be the ‘Westminster 3 Litre’, reflecting its solid values, while the Ford’s name appealed to ambitious Zephyr drivers and provincial magnates alike.

But ‘Viscount’ struck a chord with any company secretary or chartered accountant with dreams (or delusions) of grandeur.

Plus, it was applied to a rather good-looking car. The Vauxhall and the Ford seem to be perfectly in key with an urban landscape increasingly dominated by tower blocks, but the Viscount’s ‘coke-bottle’ lines appear slightly less formidable than the Executive’s. 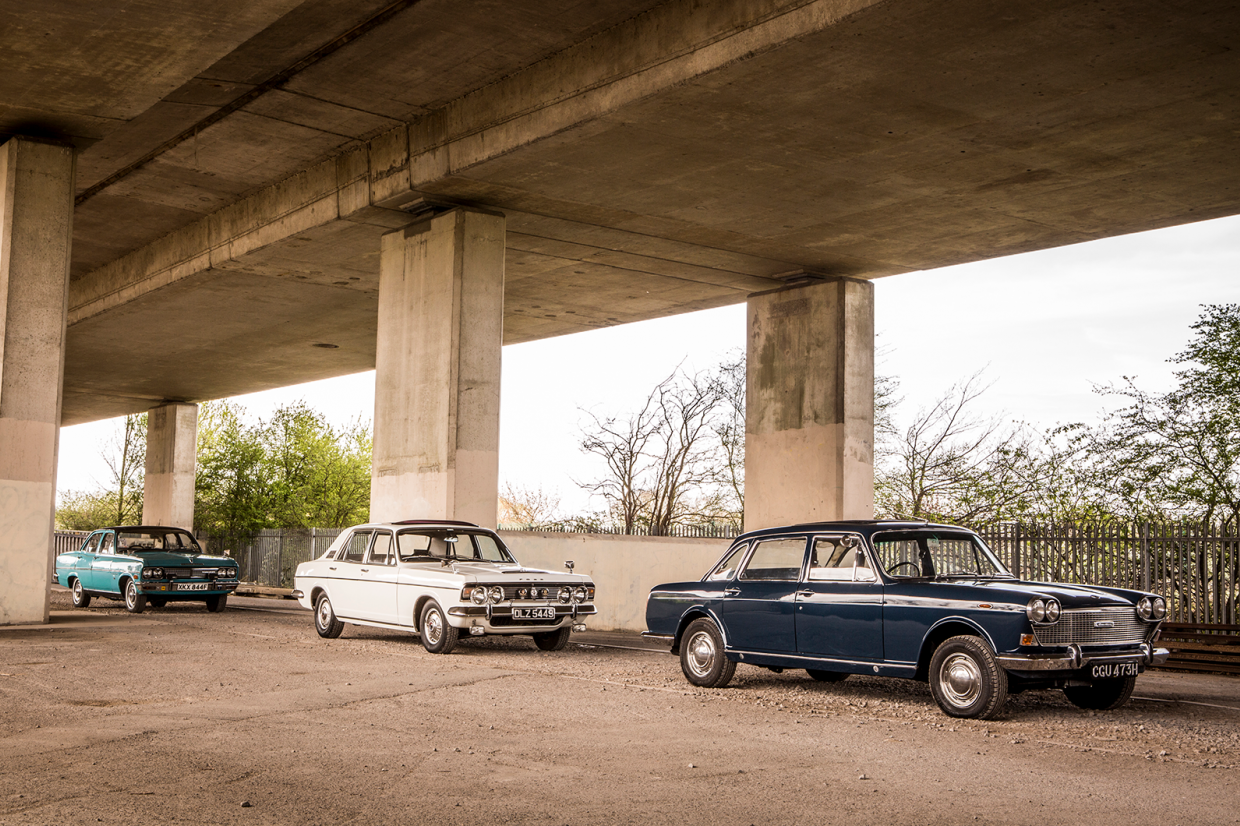 The Viscount is also proudly the chintziest of our group, from the elaborate radiator grille to the ‘black grained fabric’ roof.

It sets out to insulate its occupants from mundane cares and this it does with considerable aplomb.

Even by the standards of the late 1960s, there is little that is technologically groundbreaking about the Vauxhall and nor was there intended to be.

Car noted that ‘once again the Vauxhall impressed us with its roadability’. It proves to be wonderfully relaxed from the moment the steering column selector is moved towards ‘Drive’. 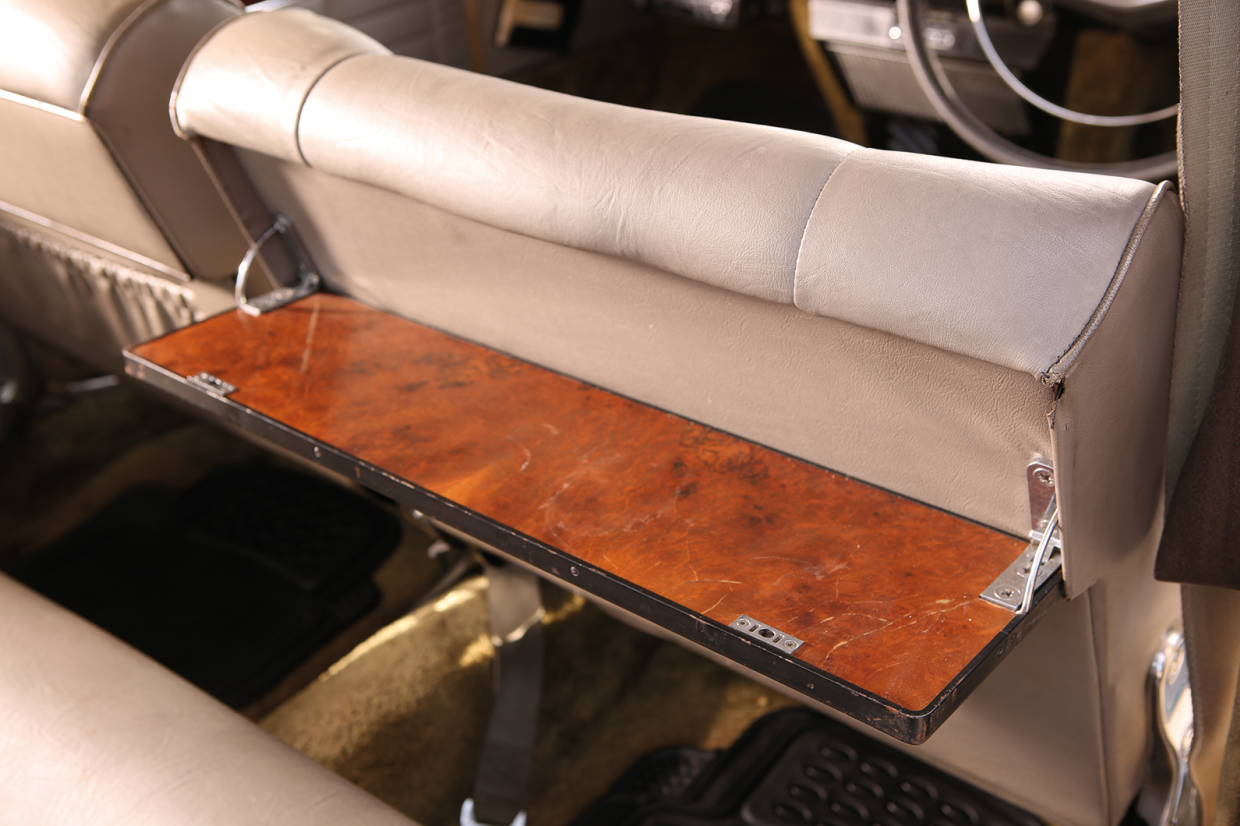 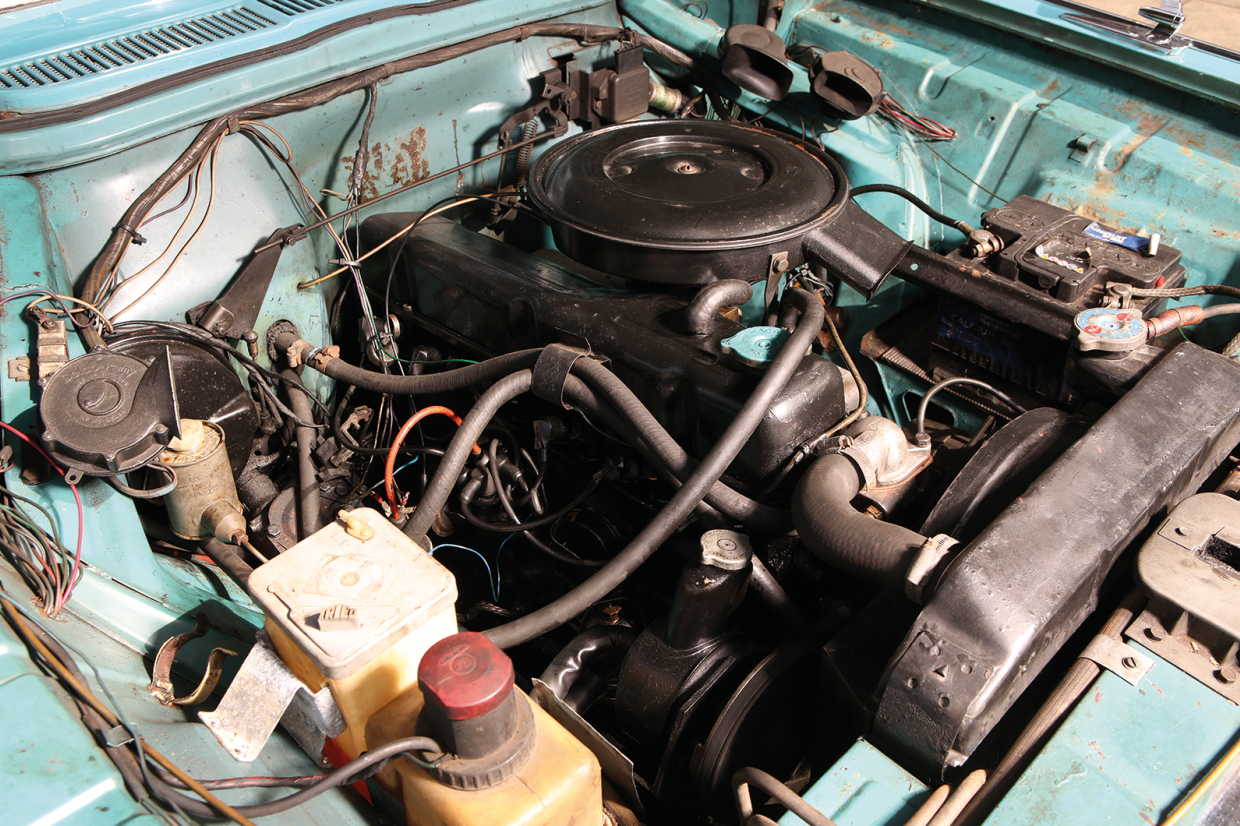 Picnic trays for the Vauxhall’s rear-seat occupants; the Viscount has a torquey ‘six’

Tony Waite’s splendid 1967 Meteor Blue Vauxhall left the Luton factory at a time when young blades in the sales team craved a Brabham Viva but the top floor demanded rather more in the way of creature comforts.

You can picture the Viscount chauffeuring various businessmen to a four-hour luncheon at the Post Office Tower and, when the PC line-up ended in ’72, no other Griffin-badged car would have the same blend of agreeable ostentation and considerable charm.

Vauxhall planned to replace the PC in late 1969, but financial problems meant that the PD was canned.

Viscount sales were limited by the early ’70s and its spiritual successor, the 1978 Royale, would be a quite different form of luxobarge. 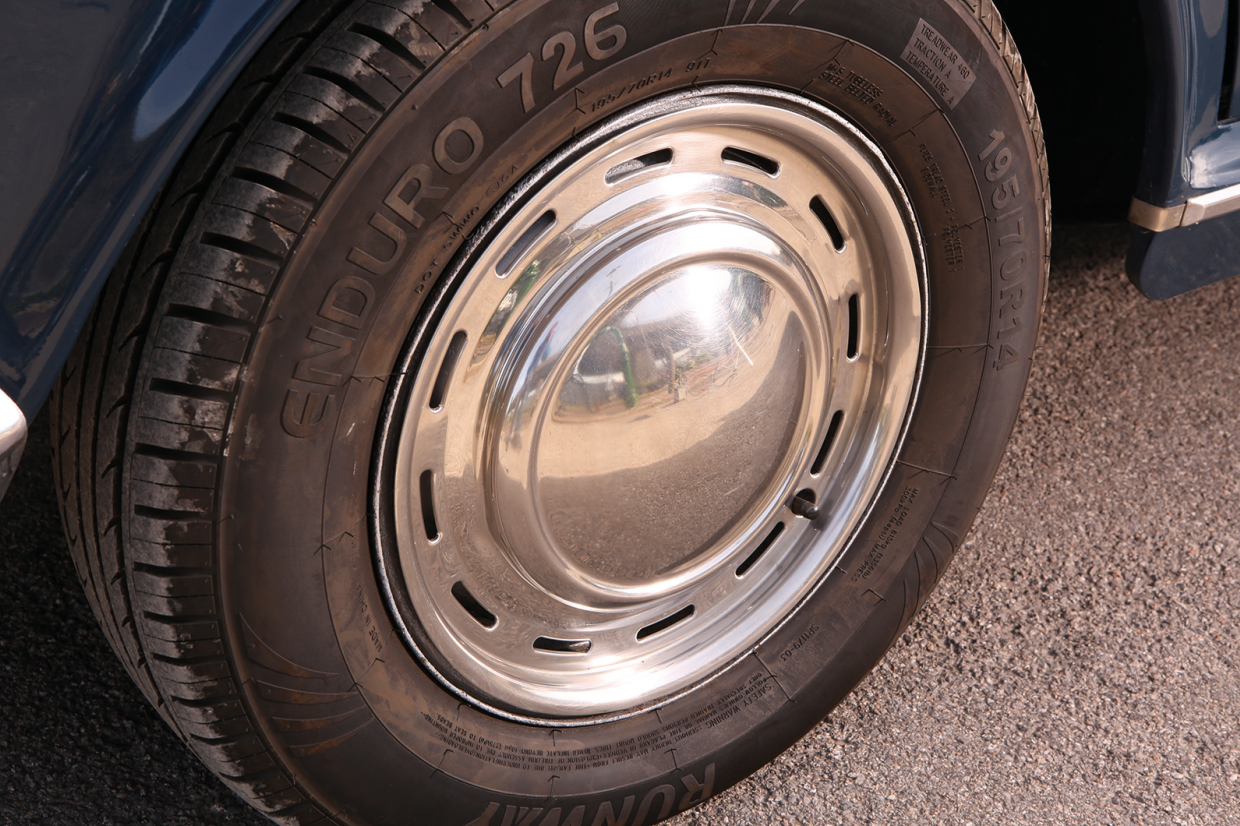 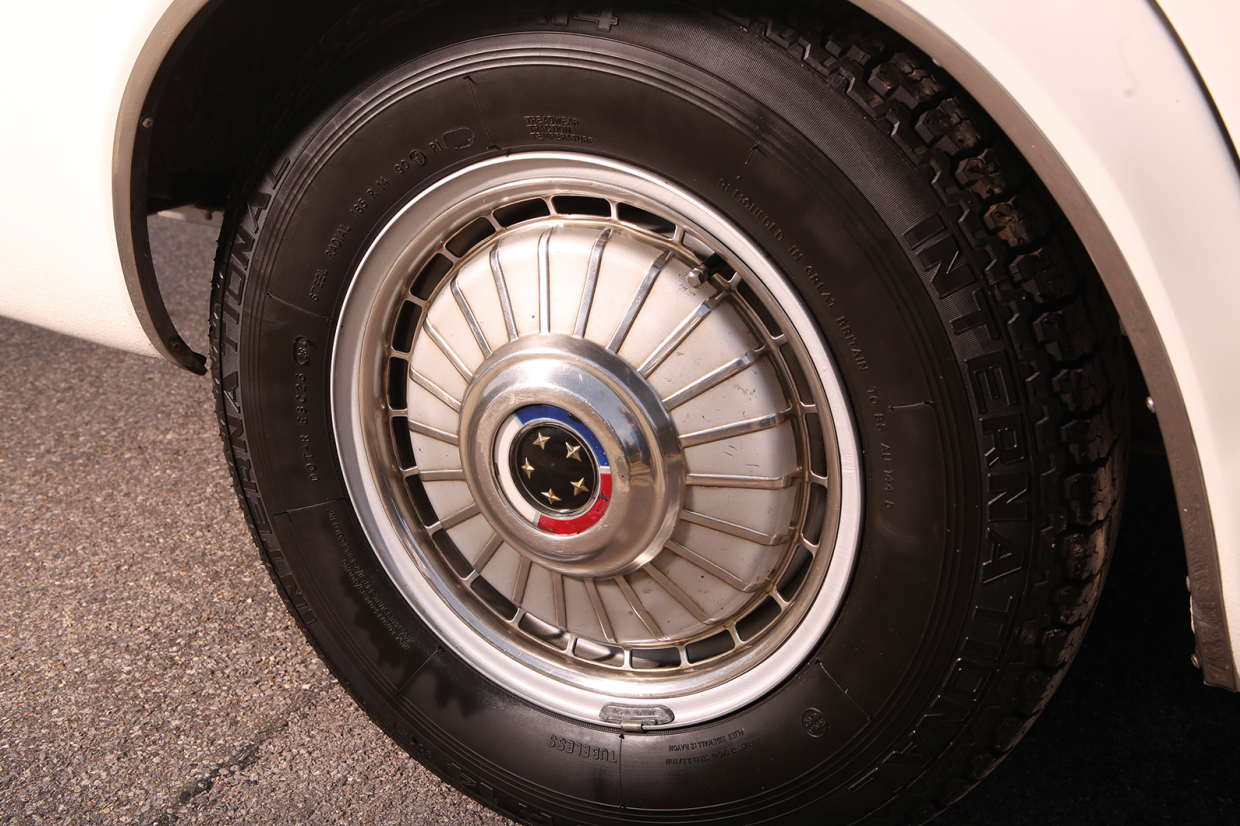 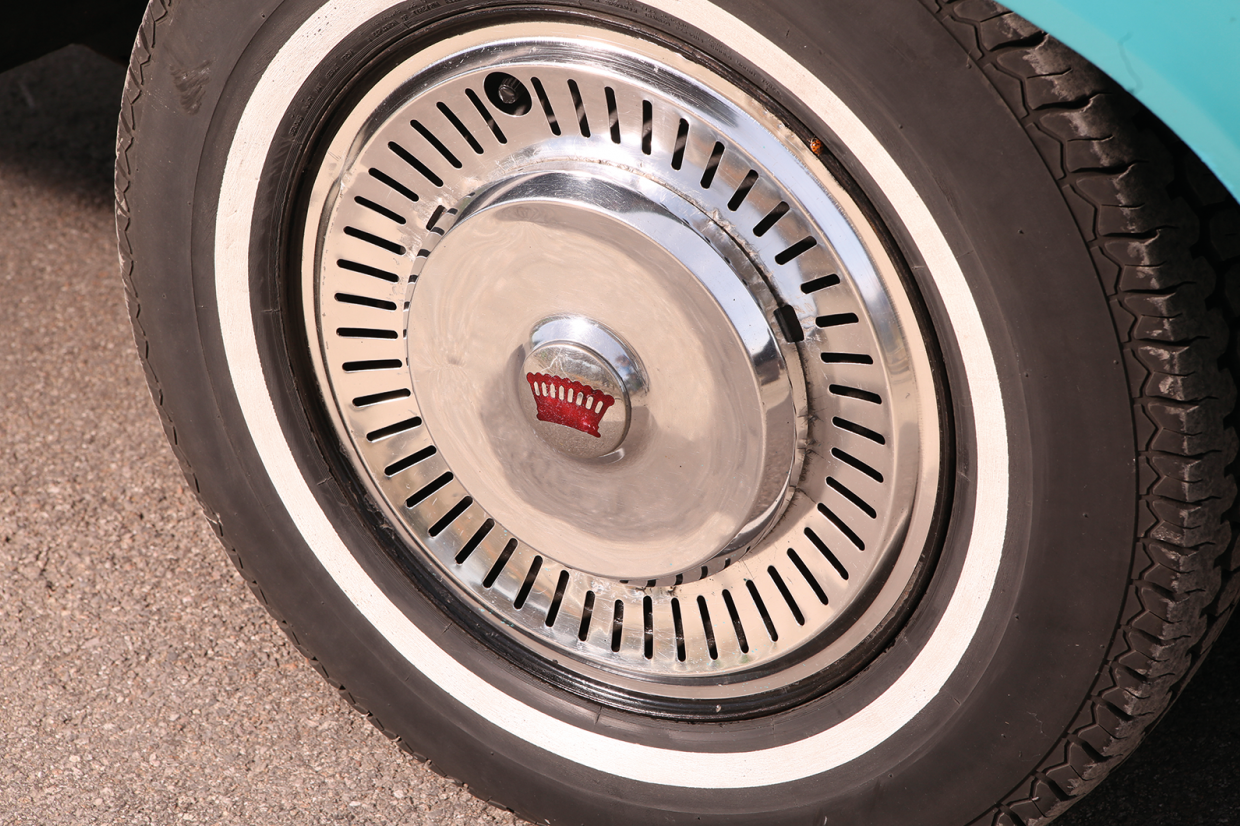 Clockwise from top: the Austin wears plain hucaps; regal motif on the Viscount’s wheels; US-style hubcaps for the Ford

Indeed, each car marked the end of an era for their respective marques.

The Austin suffered in-house competition from the cheaper Wolseley 18/85, but the Rover V8-powered version might have achieved success.

As it was, this idea sadly never reached fruition – although the 1972 Wolseley Six demonstrated the potential of a six-cylinder Landcrab.

The Mk4 range bowed out a year before Ford of Europe was created and it was to be the last of Dagenham’s US-inspired large cars.

Not even a two-tone Mk2 Granada Ghia Sapphire had quite the same blend of flamboyance and forcefulness as the Executive. 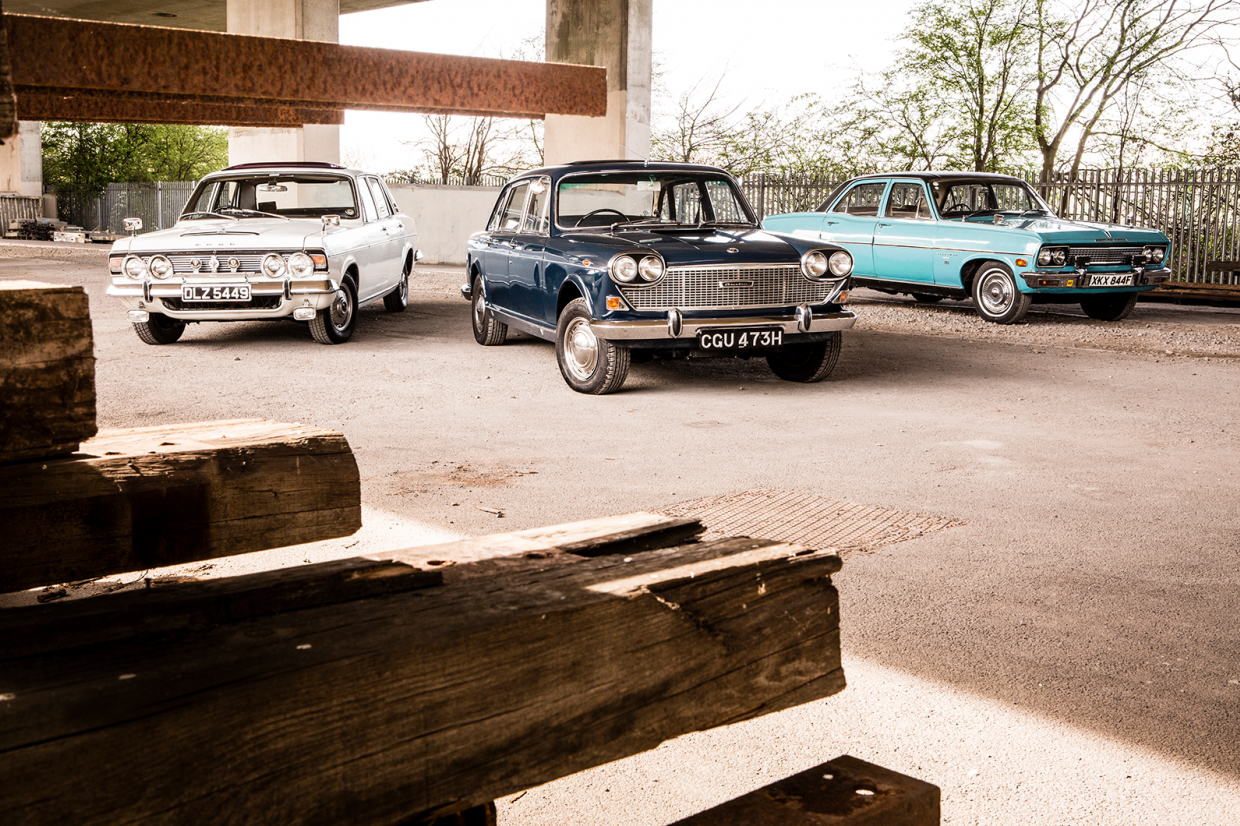 Our author has made his choice – what’s yours, Ford, Austin or Vauxhall?

Each of these impressive machines reflects a very different aspect of 1960s British life.

The Executive feels as if it was made for ‘the man on the move’, to use a popular phrase of the time, poised to dash to the next planners’ meeting for a shopping precinct near Crawley.

The Austin is low-key, supremely comfortable and altogether perfect for the chap who once bemoaned Sgt Pepper’s Lonely Hearts Club Band and the demise of the BBC Home Service.

That leaves the Viscount, a fairly bulky saloon of unabashed social pretension and a definite modicum of style. In other words, it is my ideal car.

This was originally published in our November 2017 magazine 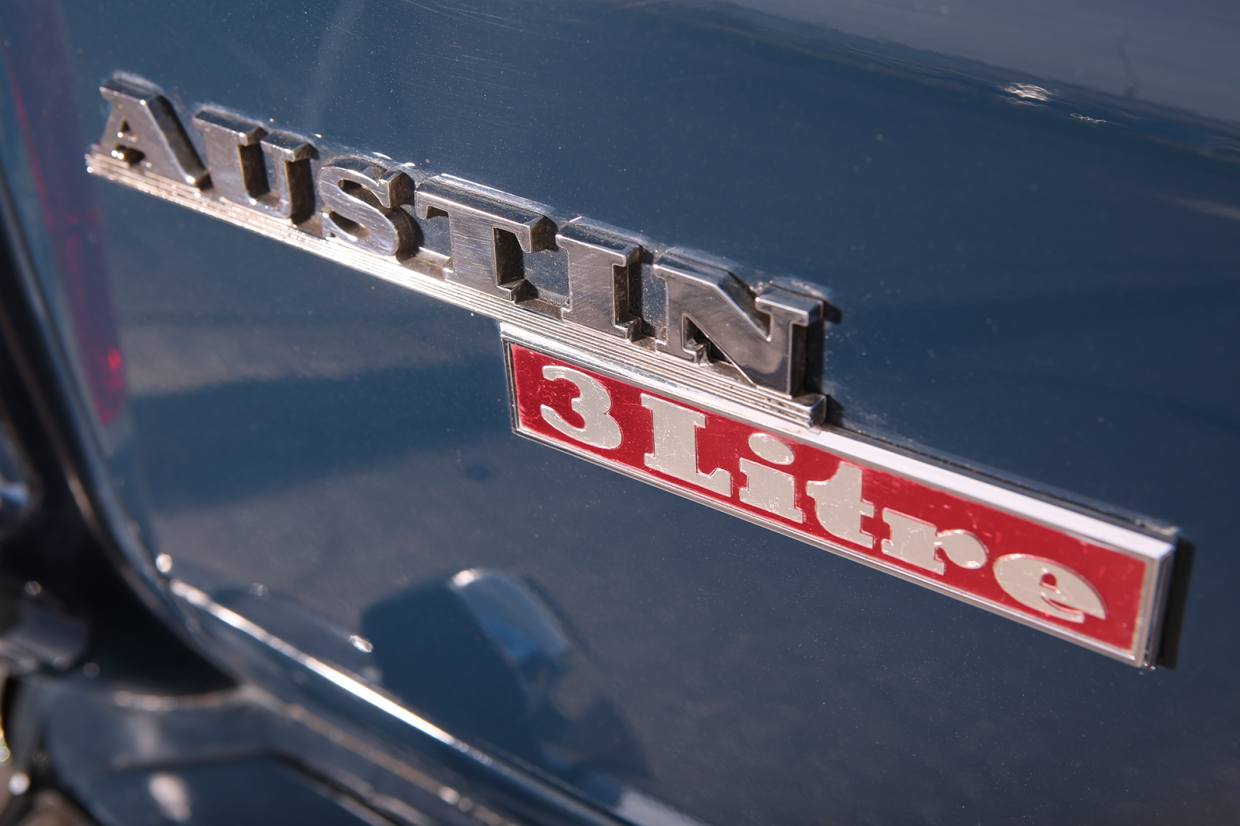 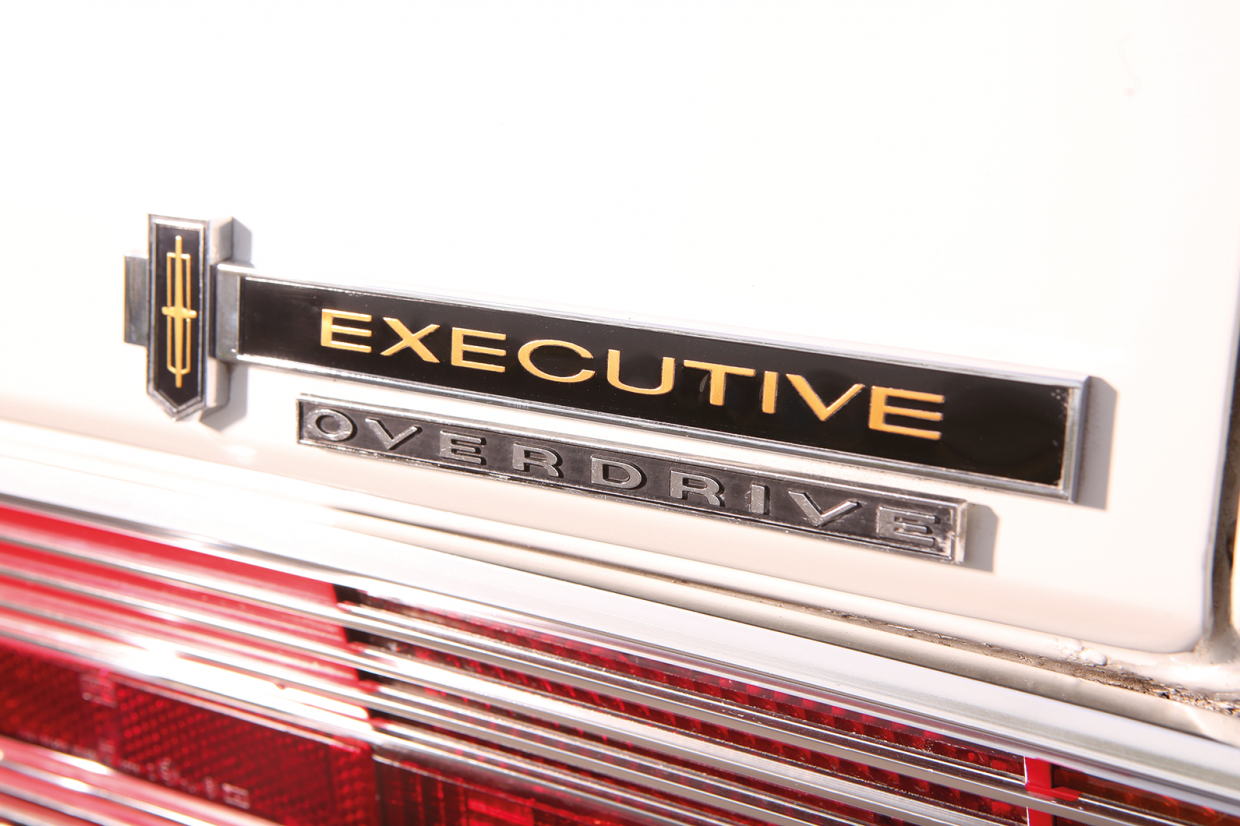 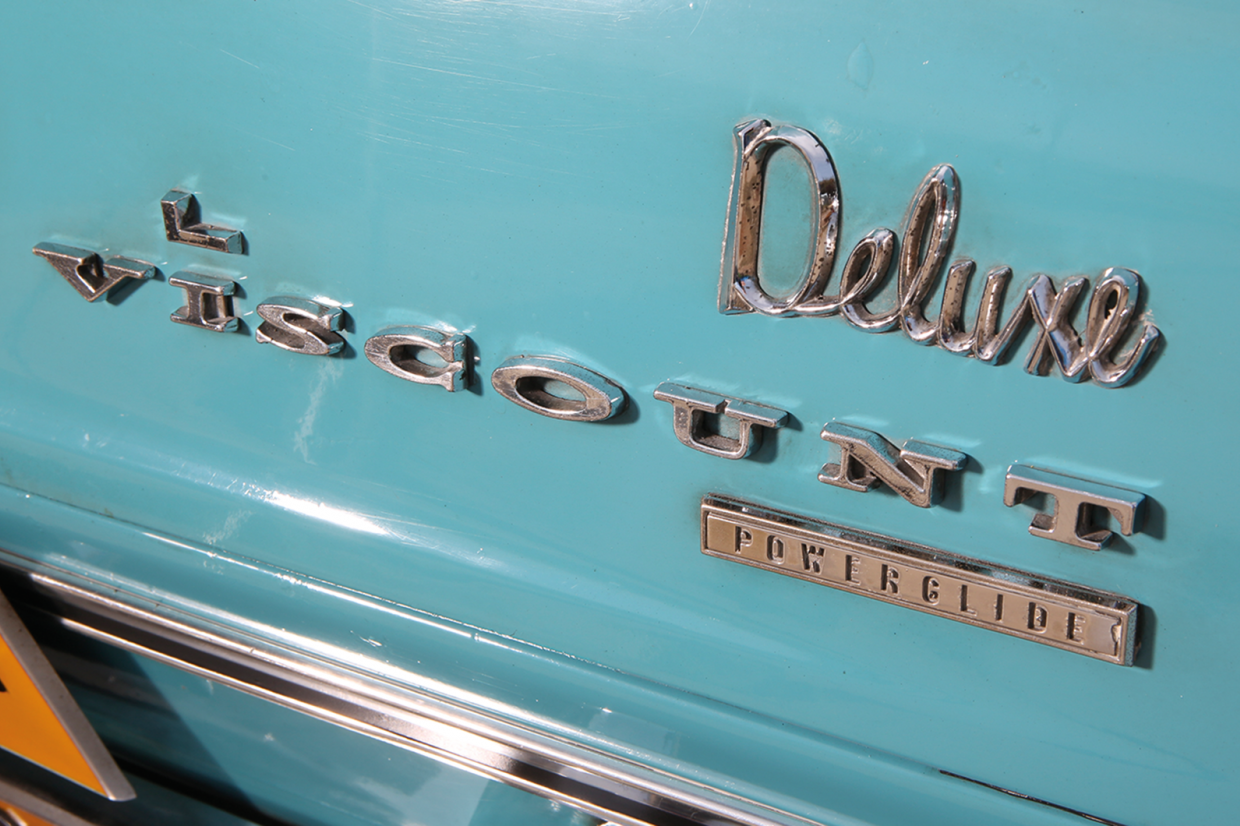