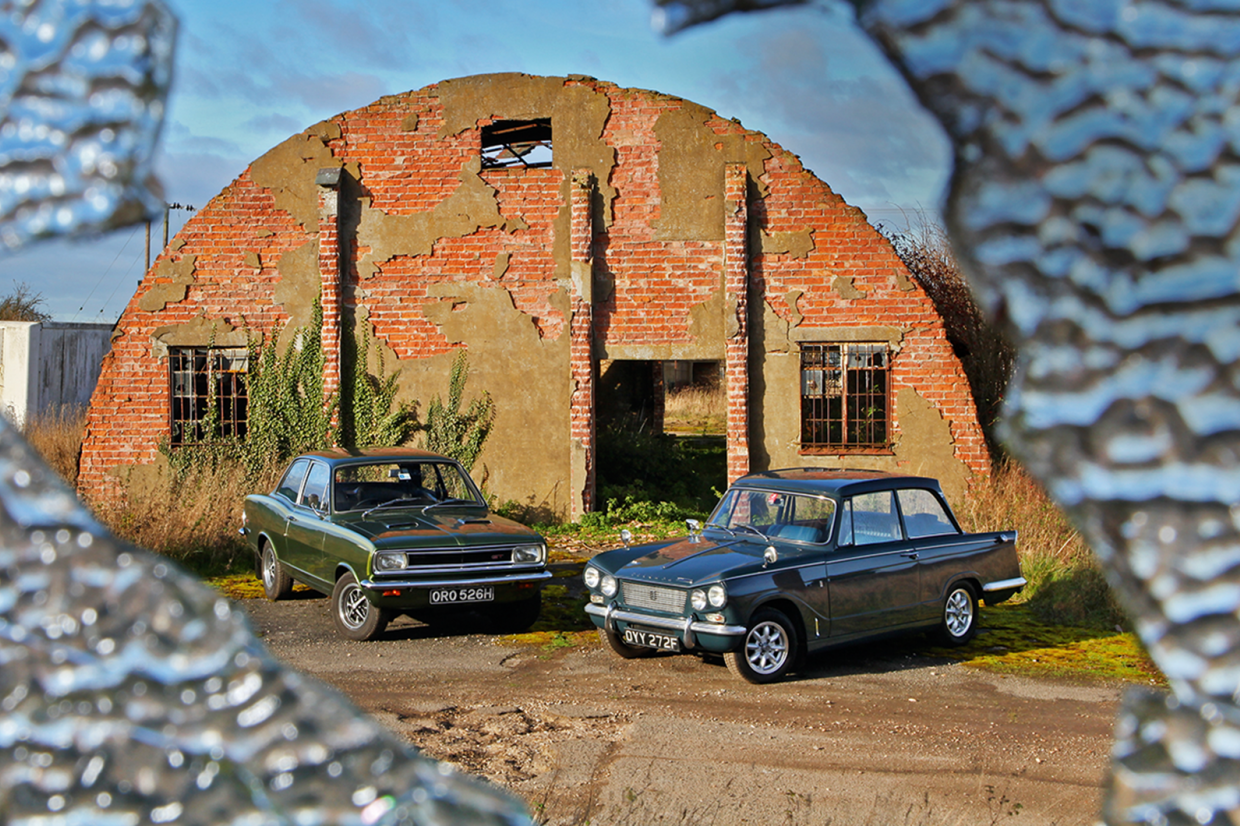 The enthusiastic motorist of the late ’50s would not have considered Vauxhall to be a genuine rival to Triumph, which basked in the glow created by its popular TR sports-car range.

Not since the fabled 30-98 of the vintage era had the Luton firm produced an overtly sporting model, and it was also losing out by not being represented in the small-engined market so ably exploited by the Herald.

But both of those things were about to change, and come together in one particular car. 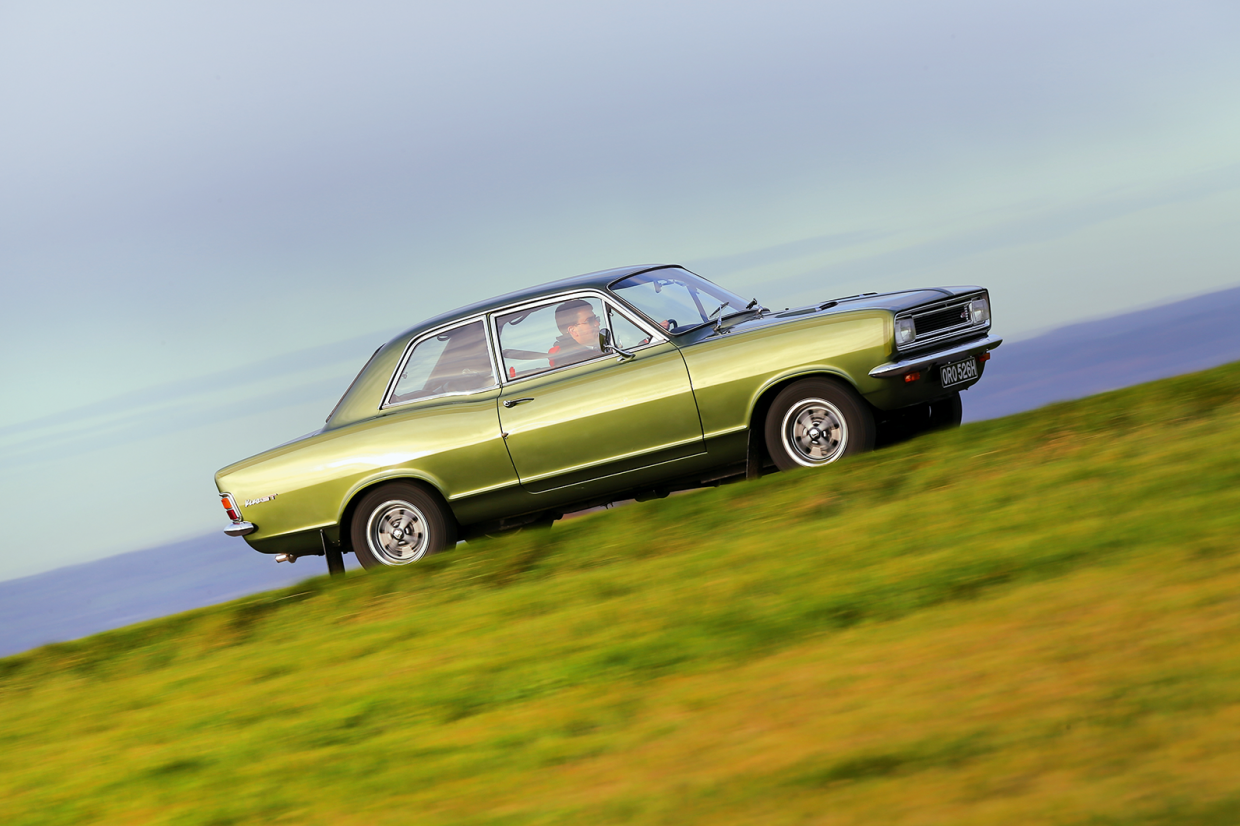 The performance issue was first addressed by the 71bhp version of 1961’s FB Victor, the base model of which continued Vauxhall’s move away from the outlandish American-inspired styling that characterised its recent past.

If the FB Victor was more sober than its predecessor, the new Viva was utterly conventional and anonymous when it was launched in 1963.

Seemingly designed solely with the use of a set square, the boxy little HA was the baby of the Vauxhall line-up. It was fitted with a 1057cc engine and represented the company’s answer to the Ford Anglia and BMC 1100 range. 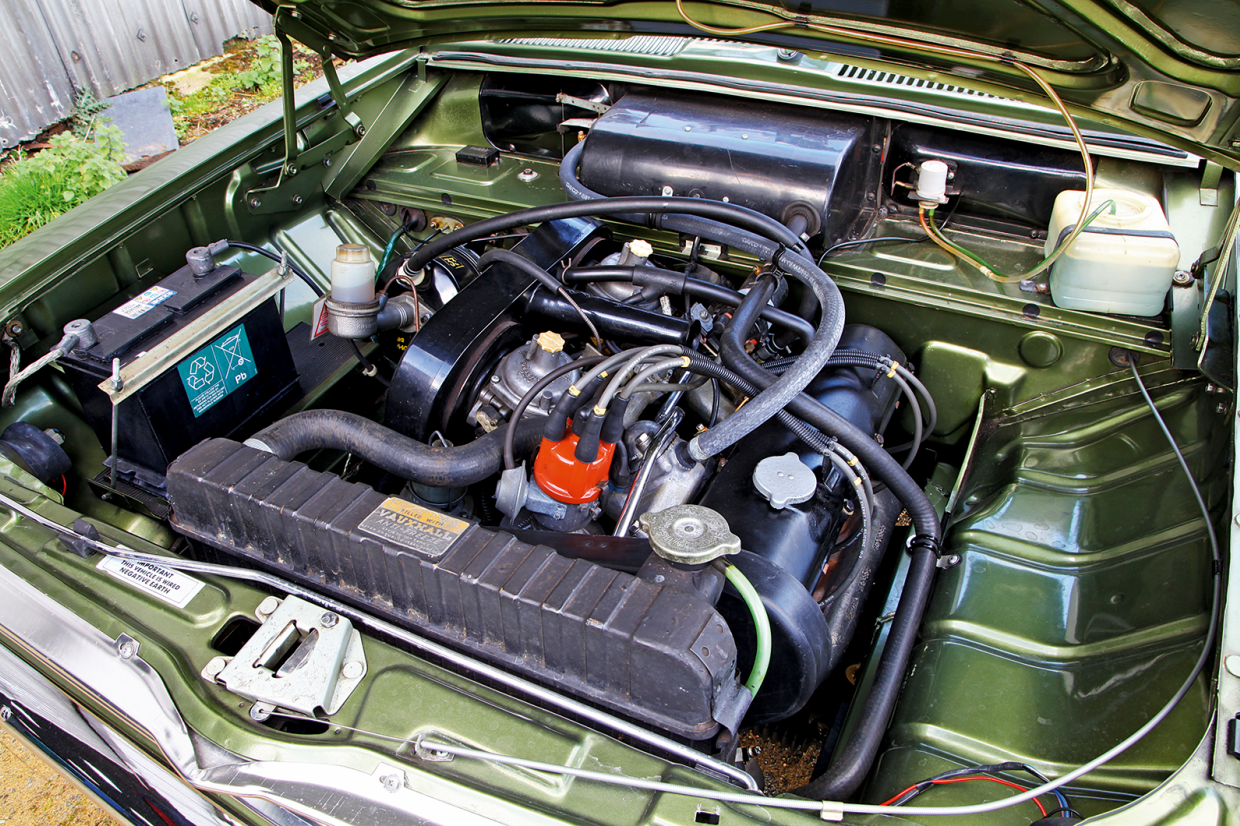 The Viva GT’s ohc ‘four’ came from the FD Victor

Basic and functional it might have been, but the Viva was not forgotten when it came to the application of a new sporting ethos.

Late in the HA’s life, the ‘90’ version was offered with a high-compression 60bhp engine (the standard unit gave 44bhp), while the SL trim attempted to spruce up the exterior with optional spotlamps, stripes down the side and new wheeltrims.

Any criticism of the conservative styling was comprehensively answered by the 1966 HB. Its softer, flowing lines translated into more room inside, and the entry-level engine was enlarged to 1159cc.

Power was boosted by the change, but performance wasn’t – any gains being negated by the increase in weight. Roadholding benefited from the adoption of wishbones and coilovers at the front; at the rear, the live axle employed coil springs and radius arms.

This was a very capable starting point from which to develop a sporting model. 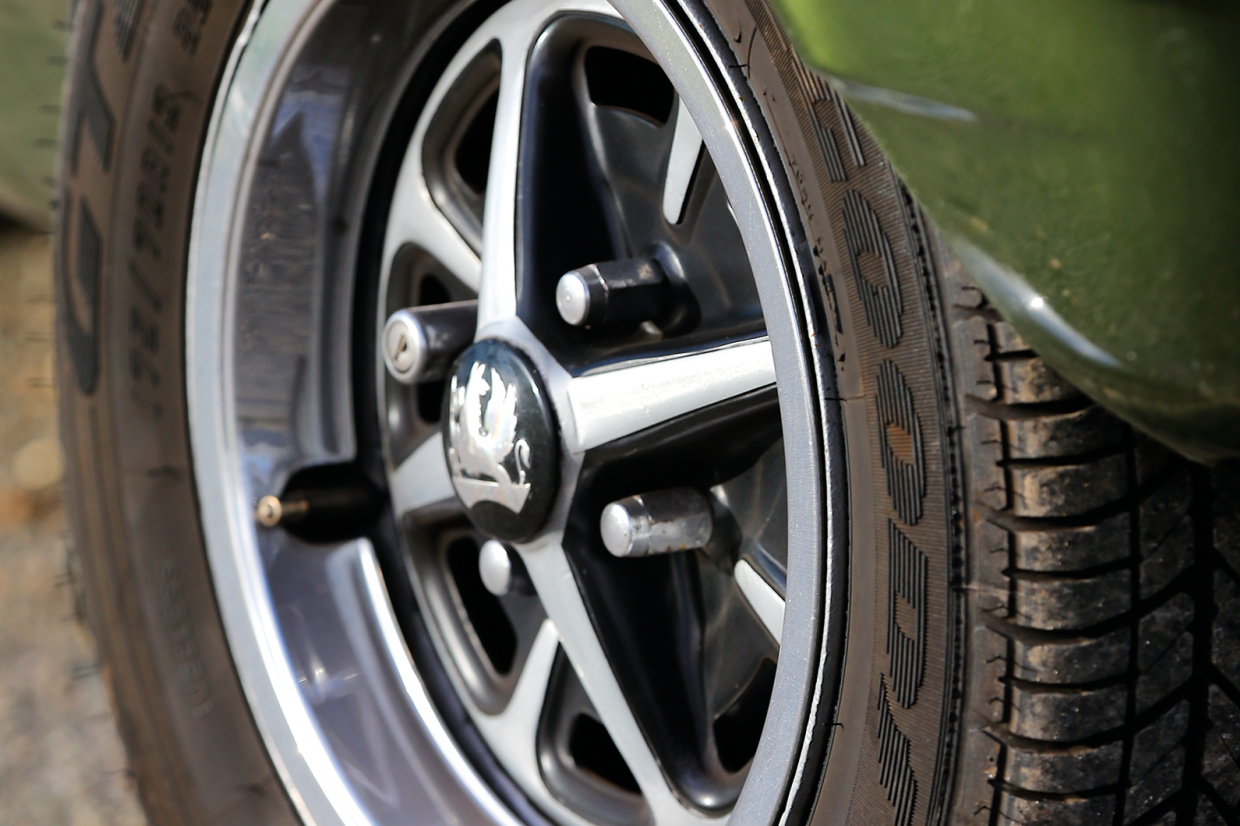 RoStyle wheels for this Viva GT

Both the SL and the 90 options were carried over to the HB, and you could further upgrade your Viva with the ‘Brabham’ extras, named after F1 World Champion Jack.

An SL90 already had a hotter cam, high-compression head, lower final drive and a free-flow exhaust – the Brabham kit included an extra carburettor on a revised inlet manifold, plus a gas-flowed head, wider wheels and styling accessories such as exterior stripes and a wood-rimmed steering wheel.

But however clever and effective those modifications were, they were still being applied to the ageing pushrod powerplant.

The development of the overhead-cam, slant-four engines for the FD Victor provided a ready-made solution, when someone wisely decided that dropping the 1975cc unit into the Viva would probably make the smaller model go quite well. 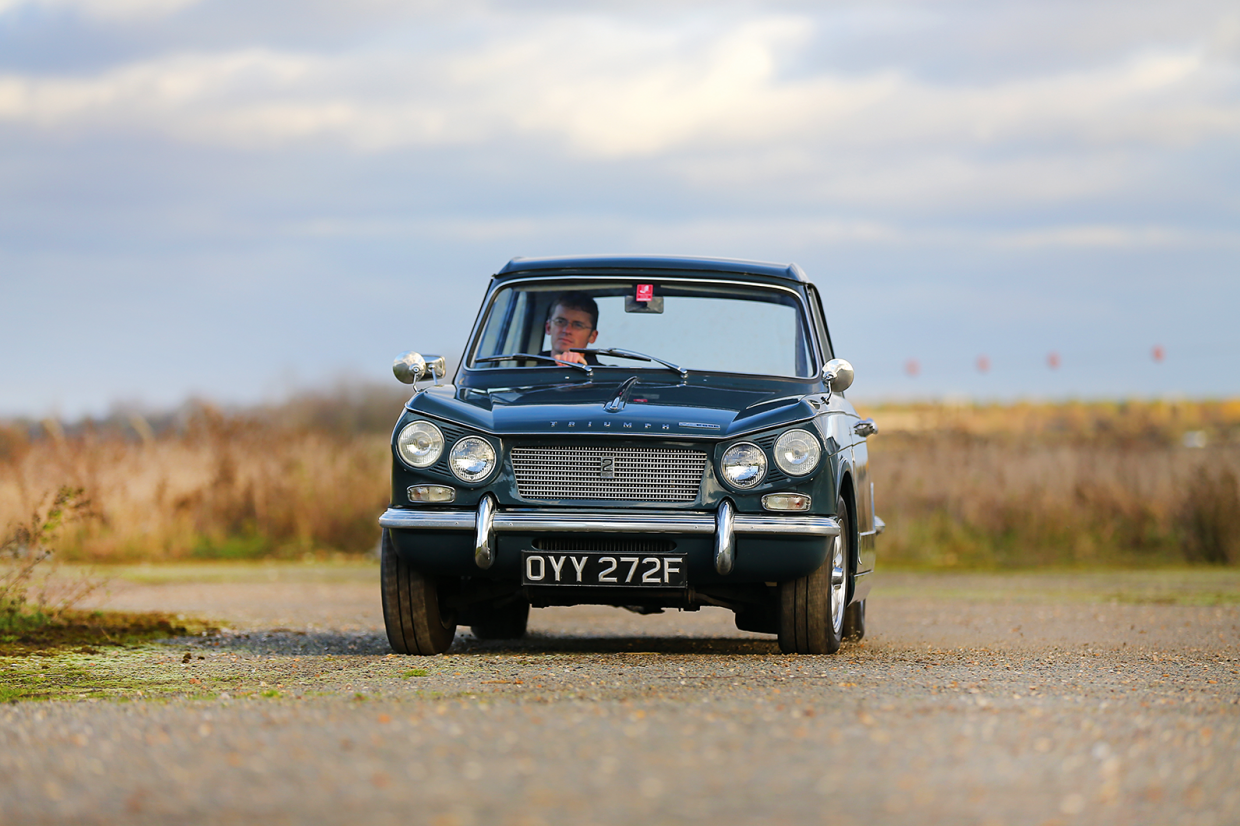 At the same time, over in Coventry, Triumph was trying to maintain the competitiveness of its own compact 2-litre model.

Launched a year before the Viva HA in May 1962, the Vitesse initially combined a 1596cc version of the Standard Vanguard-based straight-six with a lightly modified Herald platform.

That meant relying on a separate chassis – Triumph having chosen that increasingly outdated method of construction due to a number of reasons, chief among them being a lack of body-building companies available to do it.

A close-ratio gearbox from the Vitesse’s humble sibling was employed and there were disc brakes fitted up front, but the swing-axle rear end remained and would be a real bone of contention among road-testers.

That first Vitesse was offered for a brief period in North America as the Triumph Sports Six, but its astronomical price-tag meant that there were few takers and it was withdrawn from sale in 1964. 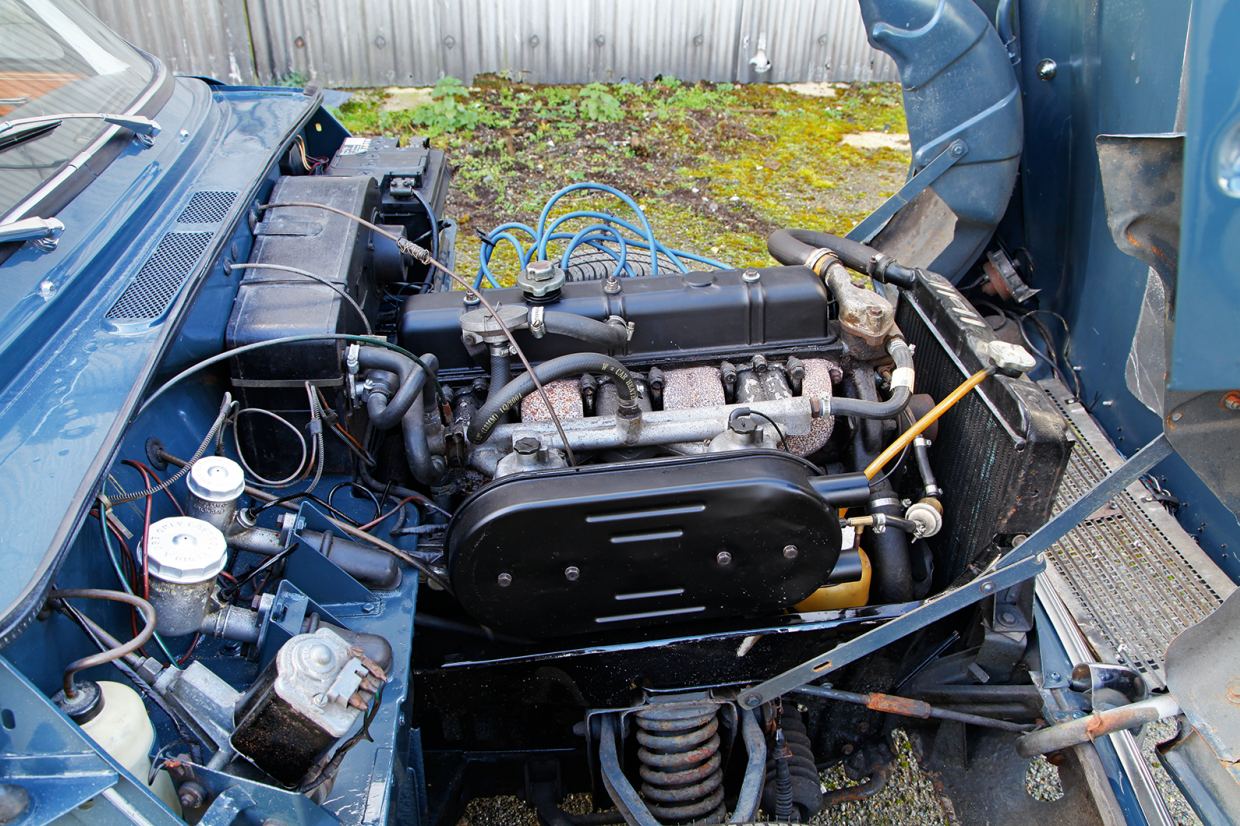 Two years after that, the 1596cc engine – which was never fitted to any other model – was ditched for expediency’s sake in favour of the 1998cc version that could be found in the 2000 saloon and the new GT6.

Fitting it beneath the famous clamshell front end was easy because the block was the same size as before, but, while the jump to 95bhp proved welcome, the retention of the swing-axles did not.

The Vitesse might have been the cheapest 2-litre car on the market – and only marginally more expensive than the new Triumph 1300 – but that didn’t wholly compensate for the occasionally wayward handling, even if radial tyres were sensibly fitted as standard.

With the straight-six on board, the weight distribution was biased towards the front. Under acceleration, the back end hunkered down and the resulting negative camber improved cornering.

The problems came when there arose a sudden need to back off midway through a turn – when the nose dropped, the swing-axles dragged the wheels into positive camber, and out stepped the rear.

In short, it was prudent to choose your speed before entering a bend, rather than changing your mind halfway through.

The gentleman from Autocar pointed out that this characteristic was not dangerous as such – you just needed to be aware of it. 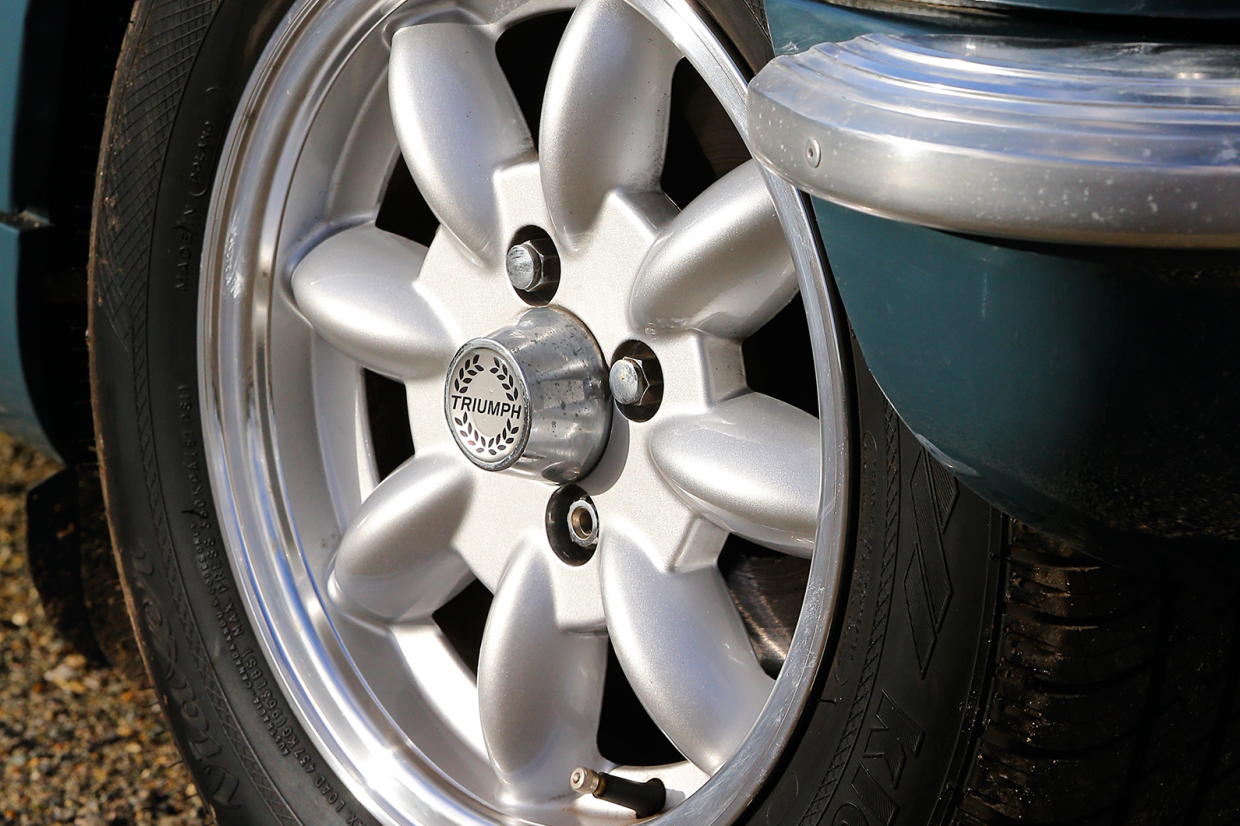 Nonetheless, the MkII of 1968 attempted to address the shortcoming, with lower wishbones being used in order to limit camber changes under acceleration and braking.

Large Rotoflex couplings were fitted to the driveshafts, too. Elsewhere, the engine was tweaked to give 104bhp, and the interior received a revised dashboard.

It all helped to keep the Vitesse relevant in a highly competitive market, yet there was no hiding the fact that the fundamental design was by then getting on for 10 years old.

The Triumph is a contemporary of the Viva GT, but to see them together is to realise that the Vitesse is from an earlier generation.

Visually, however, it’s no worse for that. The styling is angular and square, but Michelotti’s Herald outline was very effectively reworked for the Vitesse, with an aggressive twin-light front end that was eventually copied – in single-headlight form – for the Herald 13/60.

The Viva HB shape is much more modern. It’s bigger than the Triumph, for a start, but the styling is more coherent, with those ‘Coke bottle’ hips helping to improve the stance.

The first generation of GTs somewhat overdid the exterior embellishments – not everyone wanted a matt-black bonnet and four tailpipes – so the MkII of 1969 dropped both. 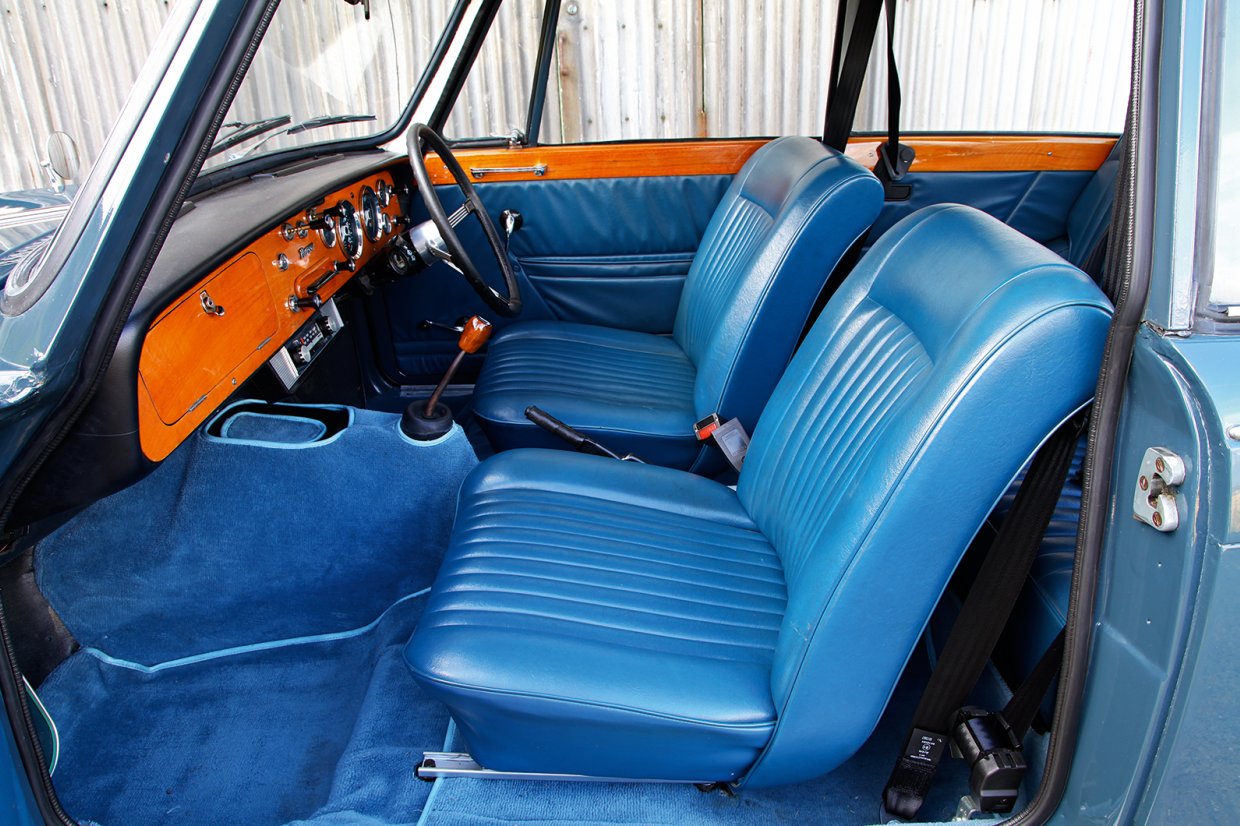 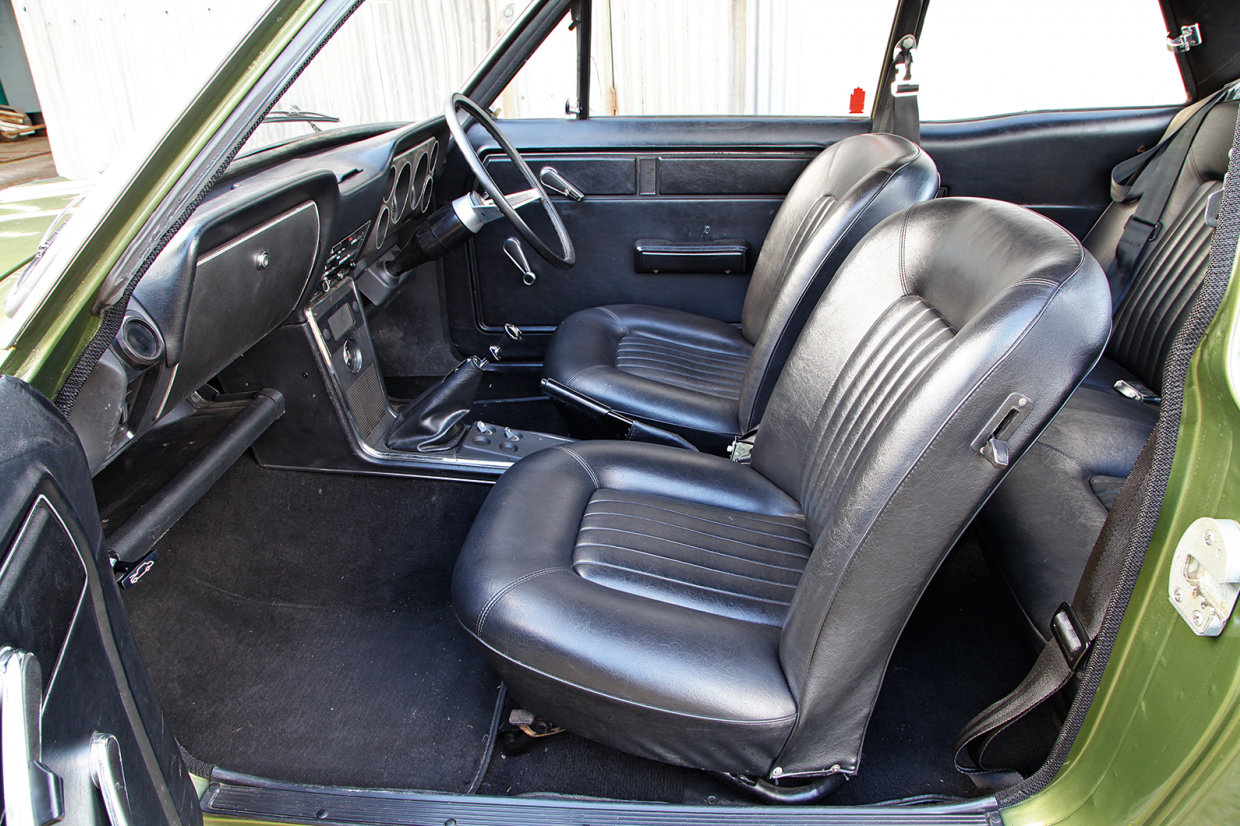 The Vitesse’s cheerful cabin (left); a sporty feel inside the well-equipped Viva GT

The differences between the cars continue inside. The Vitesse is resolutely old-school, with a veneered dash and matching door cappings.

The ergonomics were improved over the course of the model’s life, earlier cars being criticised for their scattergun approach to placement of switches and dials.

The driving position is slightly odd, with pedals offset to the right, but you don’t notice once you’re on the move and the seats – wider than those of Heralds and early Vitesses – are comfortable enough.

Dated it may be, but it’s also much lighter and more airy than the Viva. The GT made do without the veneer panels used on lesser models, which lends it a sporting if uniformly black look.

The instruments are hidden away in deep cowls, there is a centre console, and the cabin is well thought-out, if less charming than the Triumph. The Luton car was well-specced, too, with options including rear belts, a heated rear screen, locking steering column, electric washers, two-speed wipers and an internal bonnet release. 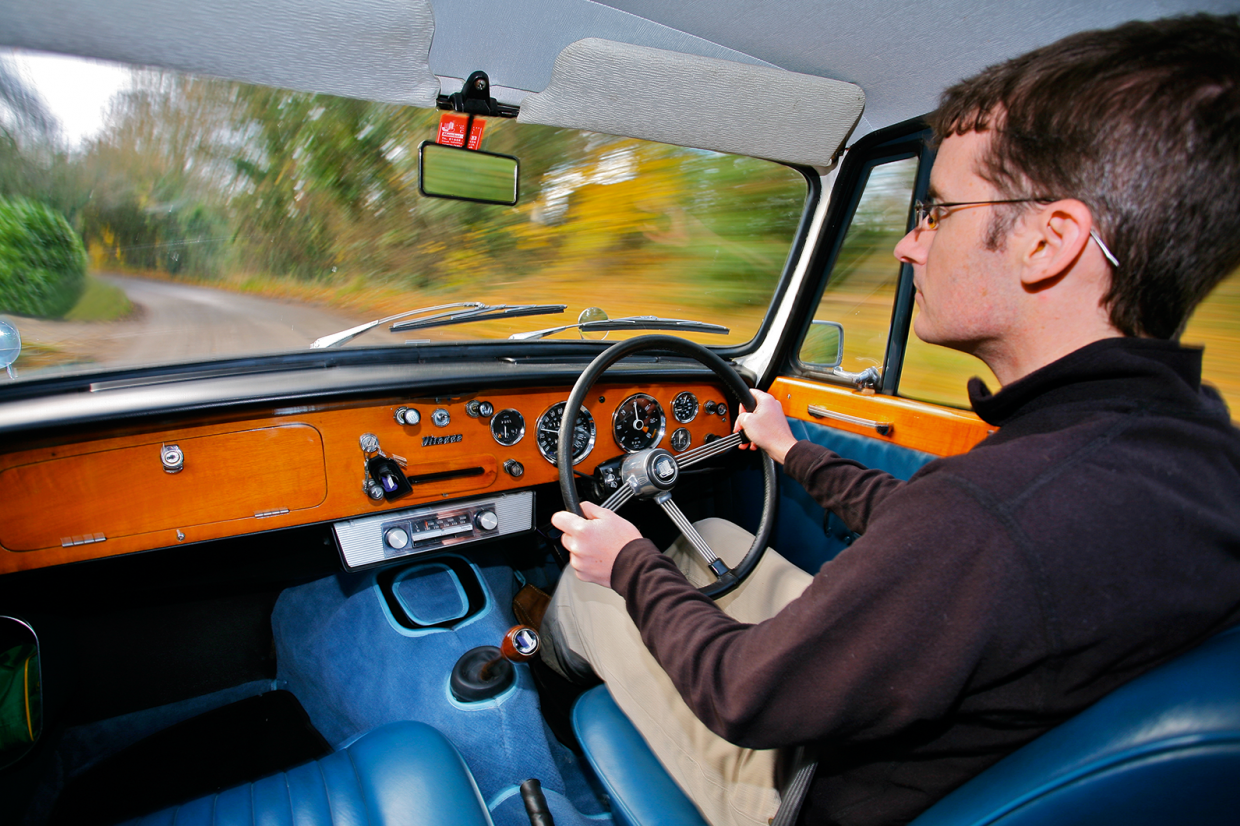 The Triumph’s cabin is far more traditional in feel, with a slab of timber for the dashboard and large sprung wheel; Vitesse got wider, more supportive seats for 2-litre version

The GT borrowed various mechanical parts from its siblings: the rear axle was modified from that used on the FD Victor, while the gearbox came from the Cresta.

Stiffer front springs and an anti-roll bar help the hottest Viva to turn in nicely with little body roll – period testers noted that the inherent understeer could be dialled-out simply by increasing the front tyre pressures.

The gearchange has a long throw and a slightly vague feel, especially when compared to the Triumph’s precise, mechanical movement.

Where the Viva does score is in its dependable nature – it doesn’t like pottering, and comes into its own as you go faster.

Certainly, the engine lacks the Triumph unit’s instant response but it feels unburstable and just keeps pulling – even if you do have to be patient while it builds up a head of steam.

Subjectively, the Vitesse seems quicker in a straight line – later Viva GTs had a taller axle ratio than the MkIs, to the detriment of acceleration – but some of that may be down to the fact that progress is considerably less serene.

The separate chassis construction means that there are more bangs and rattles, and even if you don’t often reach the point of overstretching the swing-axles in everyday driving, there is a sense that – in extremis – they would not be 100% on your side.

A lot of its foibles, however, can be forgiven for the wonderful noise from that ‘six’, especially when it’s revving hard. The GT’s four-pot simply cannot compete for charisma. 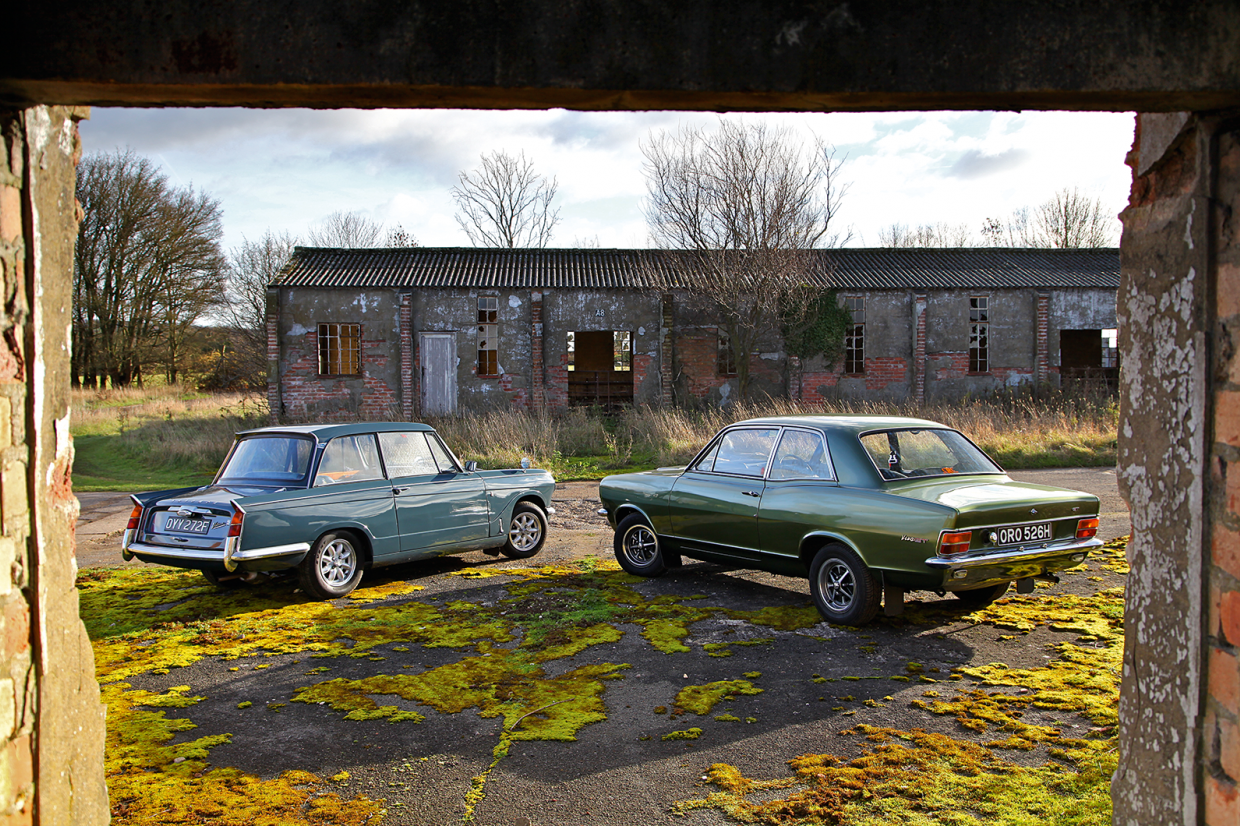 Which would you pick?

As a new-car proposition in the late 1960s, the Vitesse relied on that inherent charm almost as much as its low price.

It was more than £200 cheaper than the Vauxhall and £300 less than a Ford Escort Twin Cam. It might have been something of an anachronism, but that sort of difference must have played in its favour.

It’s a difficult choice, because what we have here is Heartbeat vs Life on Mars; tailfins vs bonnet scoops; trad jazz vs glam rock.

Personally, I’ve always been more Bowie than Bilk, but it says a lots for the UK market of the late 1960s and early ’70s that you could have both.

Thanks to Simon Hucknall at Vauxhall UK; The Triumph Sports Six Club 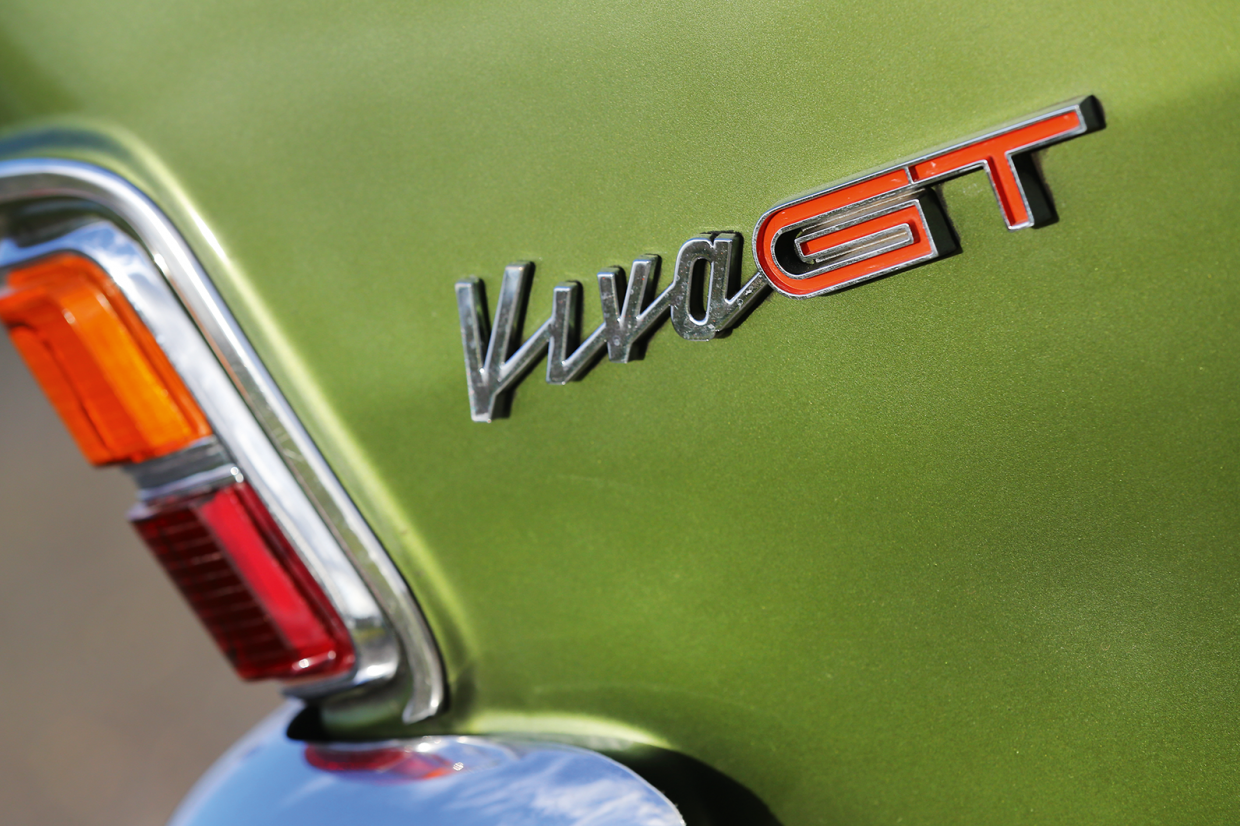 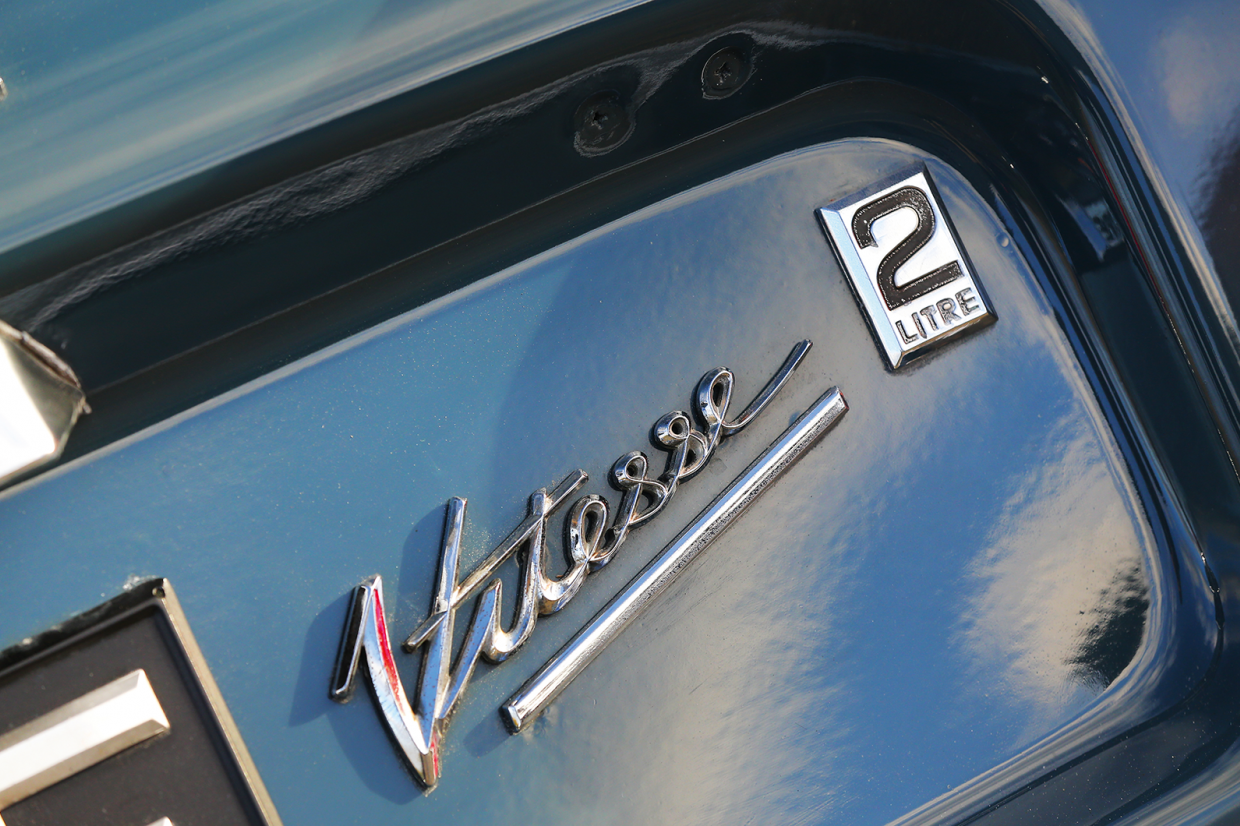