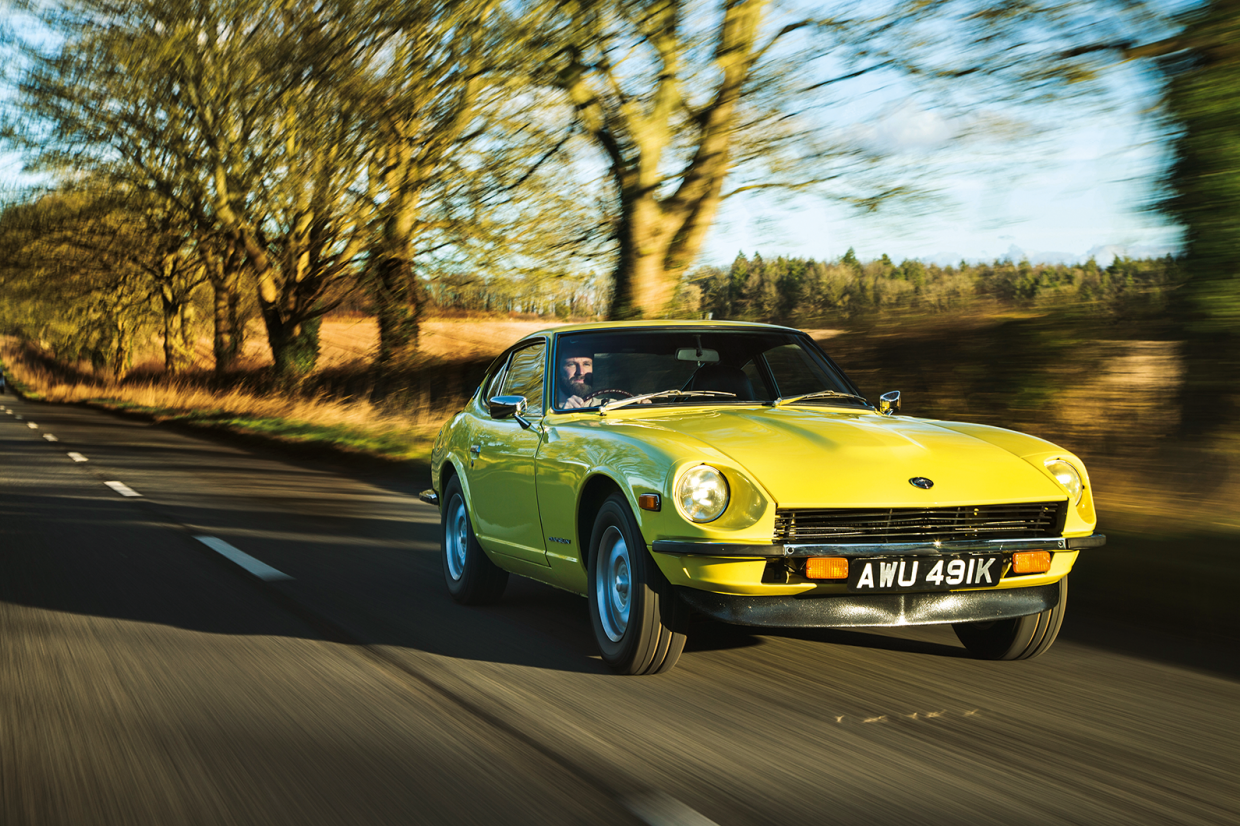 Every now and then, a car comes along that turns the automotive world on its head.

A model that not only tops its class, but widens the gap to its competitors by such a degree that it completely redefines it.

All things to all men, the solution to life’s ills. 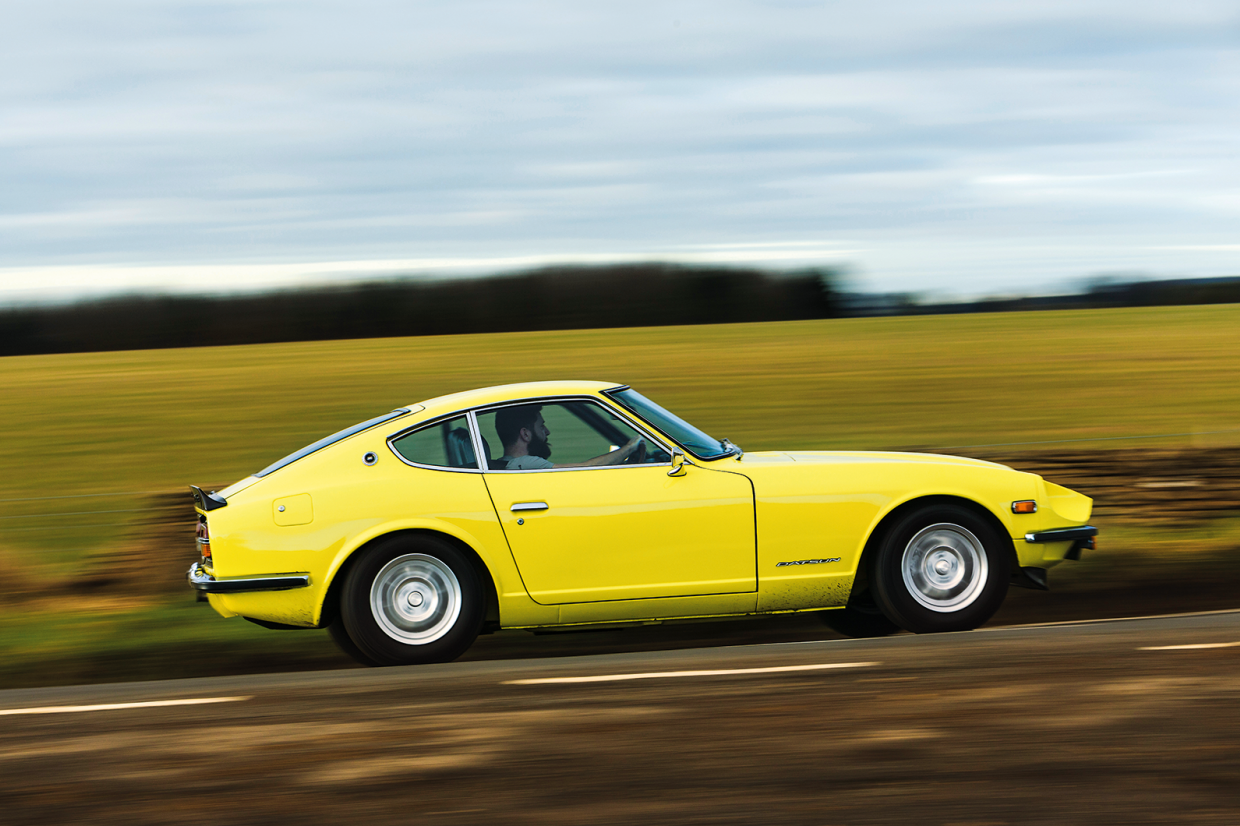 Jaguar struck on the secret formula in 1961, creating in the E-type a car that was the perfect blend of stunning looks and groundbreaking performance.

Ford managed the same trick with the Mustang three years later, bringing high performance and sleek GT looks to the blue-collar enthusiasts who had hitherto been priced out of buying a car for the sheer enjoyment of it.

But while those companies built on a sales legacy stretching back generations, Nissan’s achievement was all the more remarkable for having come from comparatively nowhere. 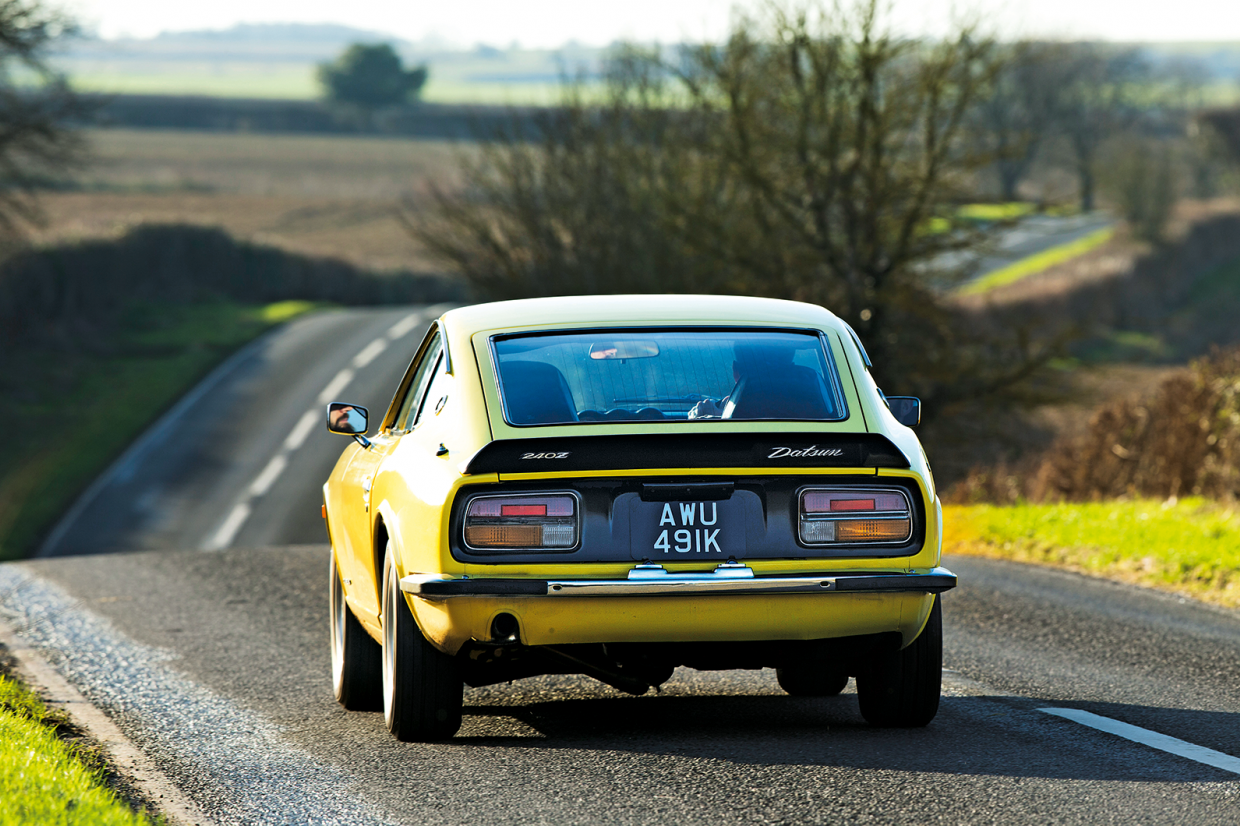 The Japanese firm’s home-run came in 1969 with the Fairlady Z, sold as the Datsun 240Z outside its home market, which stole a march on its rivals by combining electrifying pace and fresh looks with a level of fit and finish that overnight made its contemporaries look like donkey-carts.

In the crucial US market, the Datsun was so keenly priced that to opt for an alternative from the chasing peloton became almost unthinkable.

Few could have predicted the next big thing to come from the Land of the Rising Sun.

Until the Z, the most successful Japanese exports had leaned heavily on Britain’s motoring legacy for their inspiration.

The cars that resonated most, particularly in America, were the 1600 and 2000 Roadsters, utilitarian machines in the mould of the Sprite and Midget – a pared-back hangover from the sidescreened sports cars of the 1950s. 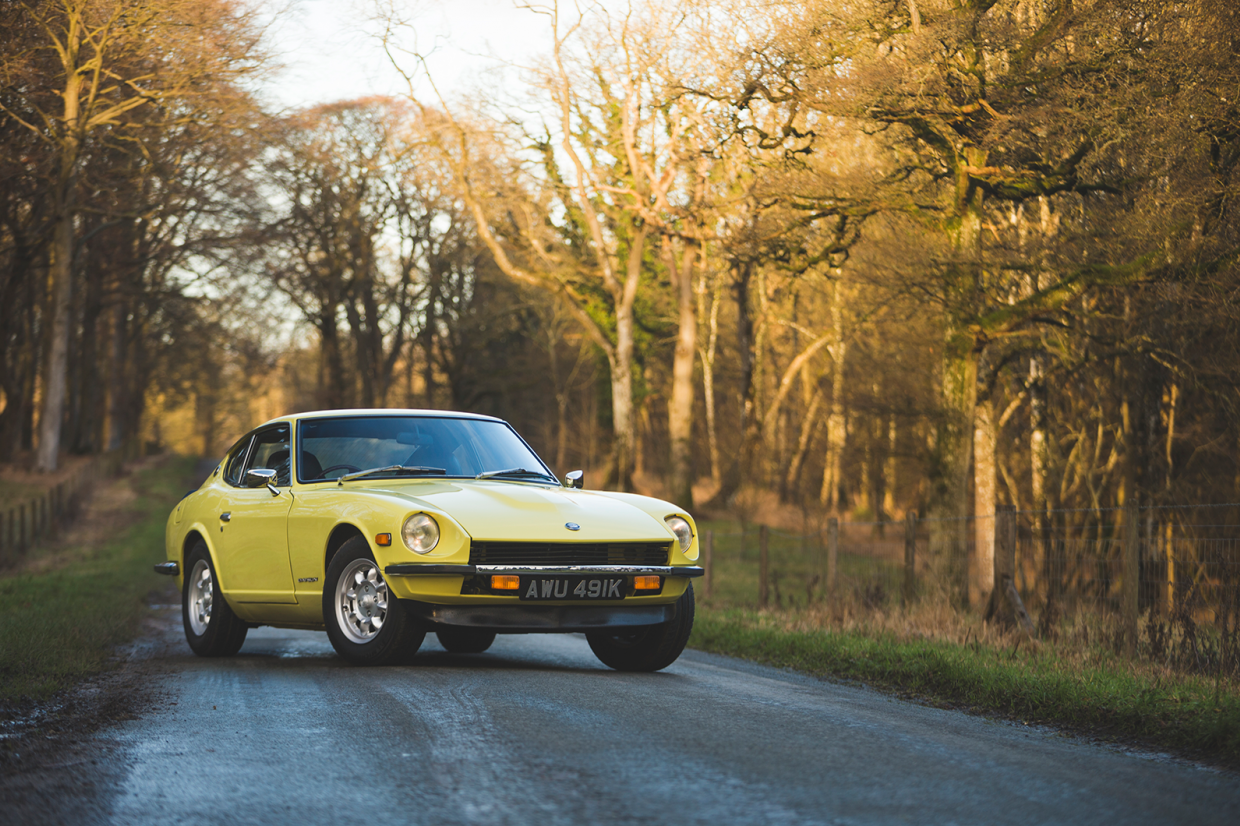 Nissan’s beachhead in the UK, meanwhile, was only established in 1968, and its first few years were hampered by crippling import duties and an arrangement to share dealerships with NSU, which was itself almost immediately subsumed by Audi.

By the end of the decade, compatriot Daihatsu had only managed to sell eight cars to British buyers – it would take something very special to make a more serious impression.

Japanese manufacturers have since become the masters at analysing and evaluating the competition to inform their designs – you need look no further than the Mazda MX-5 or Honda NSX for proof of that.

But it was the 240Z that blazed the trail, looking to improve upon – rather than emulate – the most successful cars from overseas. 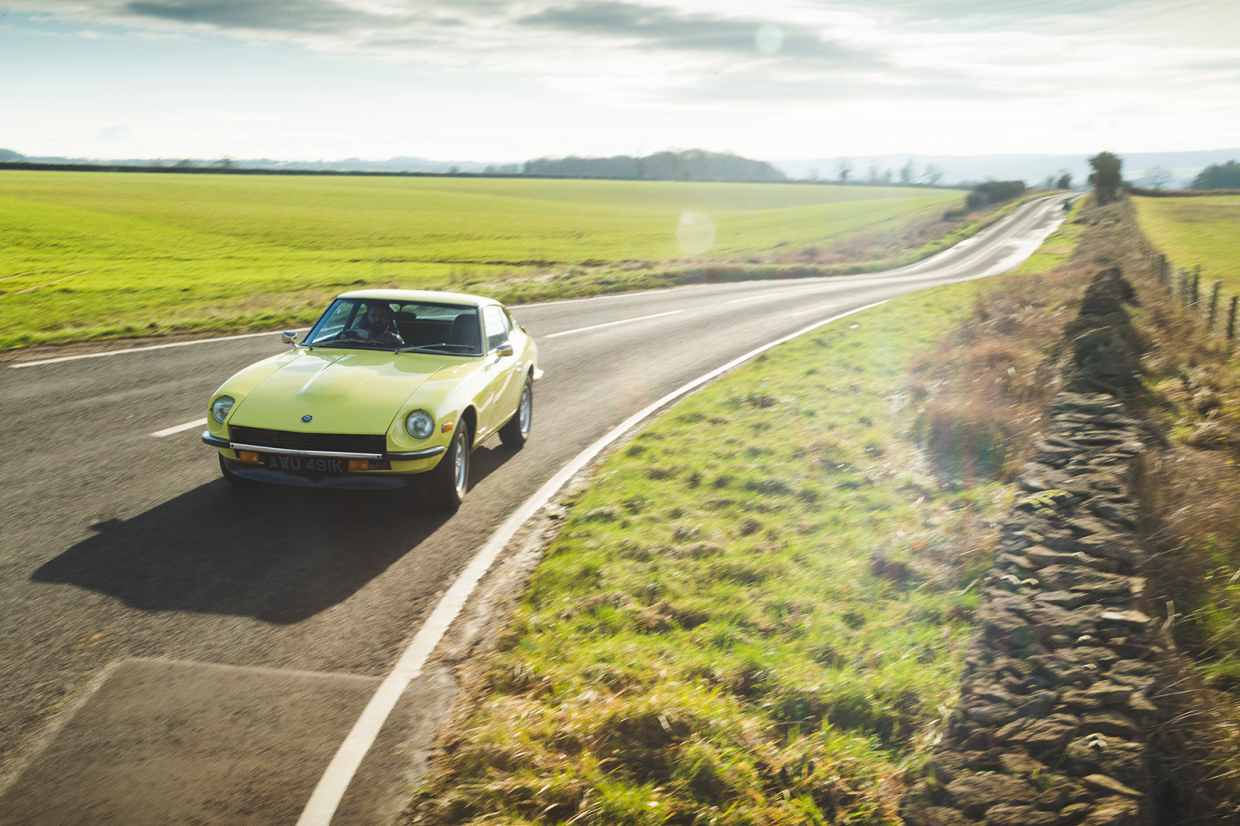 Nowhere was this more important than visual styling, which led Fumio Yoshida and Kumeo Tamura to pore over the headline coupés of the day – notably Toyota’s 2000GT, Jaguar’s E-type and even the Ferrari 275GTB, whose proportions informed the Japanese design from the earliest days of its development.

What began as the Albrecht von Goertz-inspired A550X prototype quickly transformed into something very different: an attractive classic coupé with practical dimensions and clean, modern lines that spoke more to the 1970s than the decade in which it was born.

Testament to the team’s talent that work had only begun in November 1965. 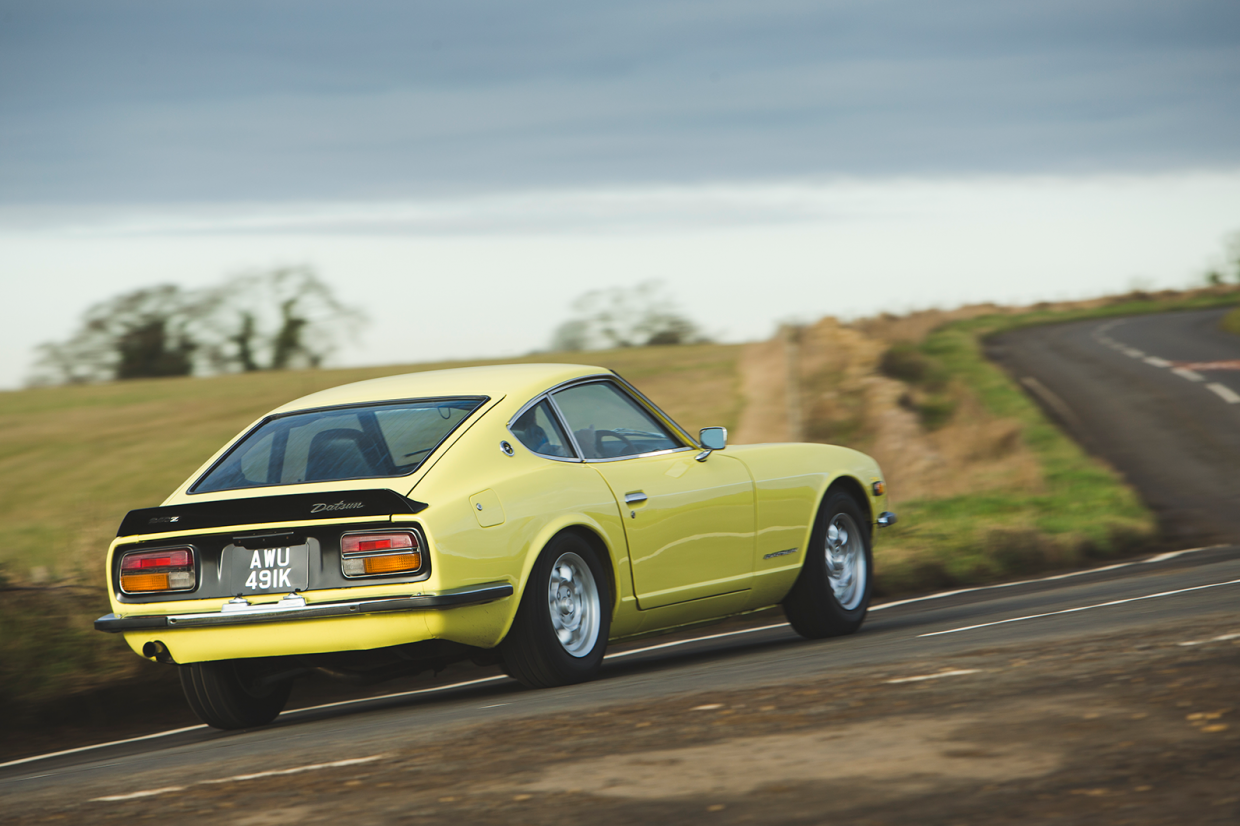 So important was the styling to the project that the clay model was agreed upon before Hitoshi Uemura, Tsuneo Benitani and Hidemi Kamahara had the chance to get their teeth into the mechanical elements, with the team subsequently facing myriad obstacles to make everything fit.

Some parts were taken straight off the shelf, with the front suspension – a lateral subframe, suspension arm and MacPherson strut arrangement – being borrowed from the existing 1800 Laurel saloon.

Other components, including the rear end, required more thought. In the end, the team opted for a Lotus-style set-up of lower A-arms and vertical struts located in the luggage area, which offered superb roadholding but exposed a lack of torsional rigidity. 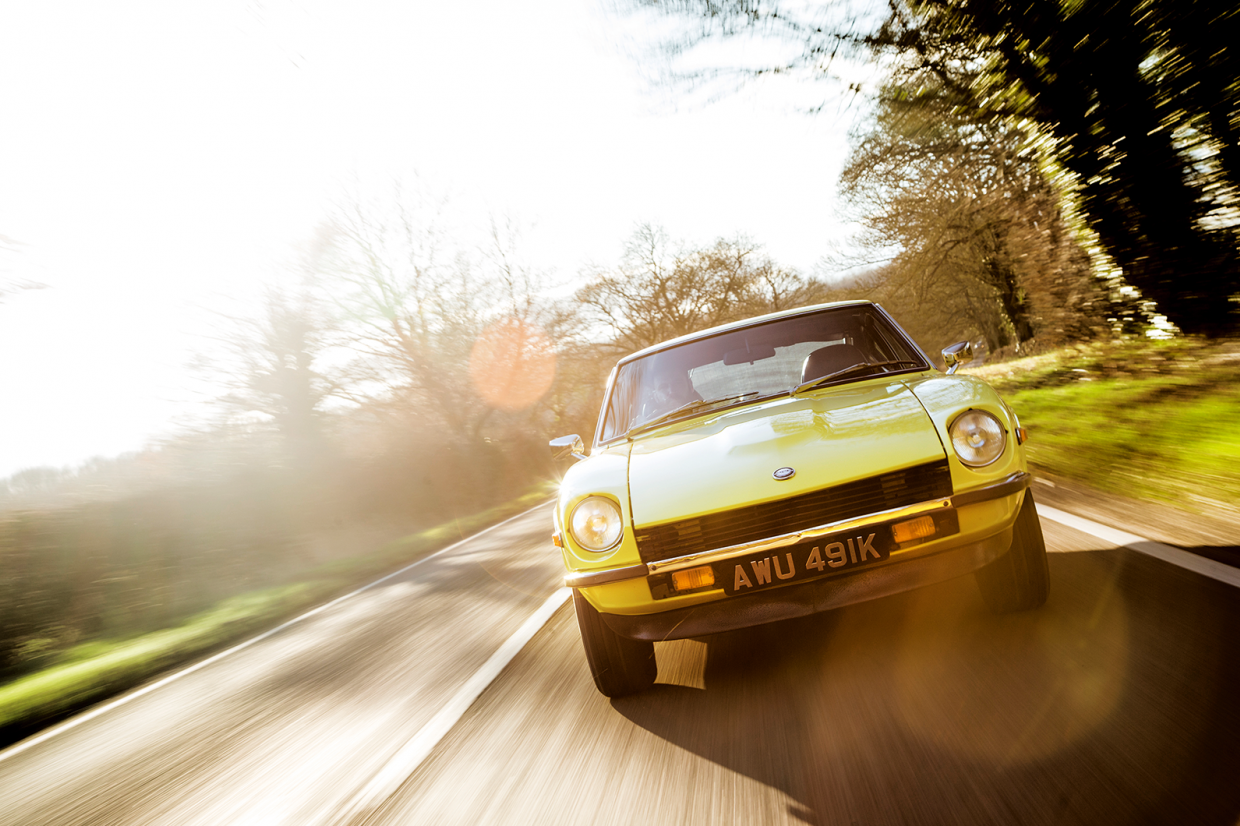 Because the brief called for two full-sized suitcases to fit in the boot, linking the struts wasn’t an option, so the designers went to great lengths to beef up the sills and apply reinforcing plates.

Practicality was retained, though a strut-brace was offered as an aftermarket extra.

Aware that the target market was North America, half an eye was also kept on Federal regulations, both in terms of crash resilience and meeting weight restrictions for emissions testing.

Late changes included swapping out the 70-litre petrol tank for a 60-litre item, which not only helped achieve the target weight of 2300lb, but was also better suited to withstanding more stringent collision tests that were on the horizon.

Previously, only frontal impacts were assessed, but new rules would mean rear safety would also be considered – any petrol leaking from the tank in the event of a crash would spell disaster. 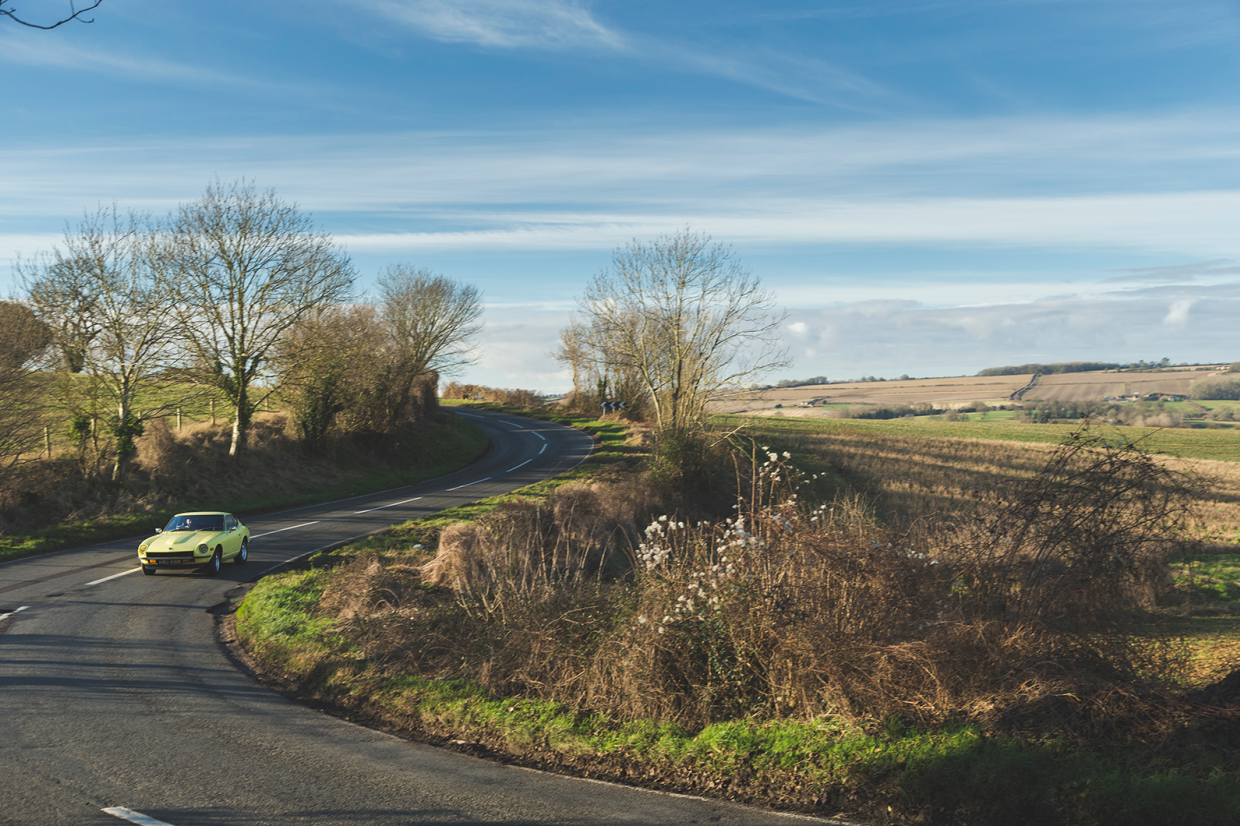 The differential was moved forward, further from the tank, resulting in the driveshafts being swept back slightly.

Engineers saved valuable grams by reducing the glass thickness from 5mm to 4mm, and ditching heavy safety bumpers in favour of pressed steel.

Weight was so crucial that the addition of underseal would have tipped it over the edge – as a result, it was applied by dealers rather than at the factory. 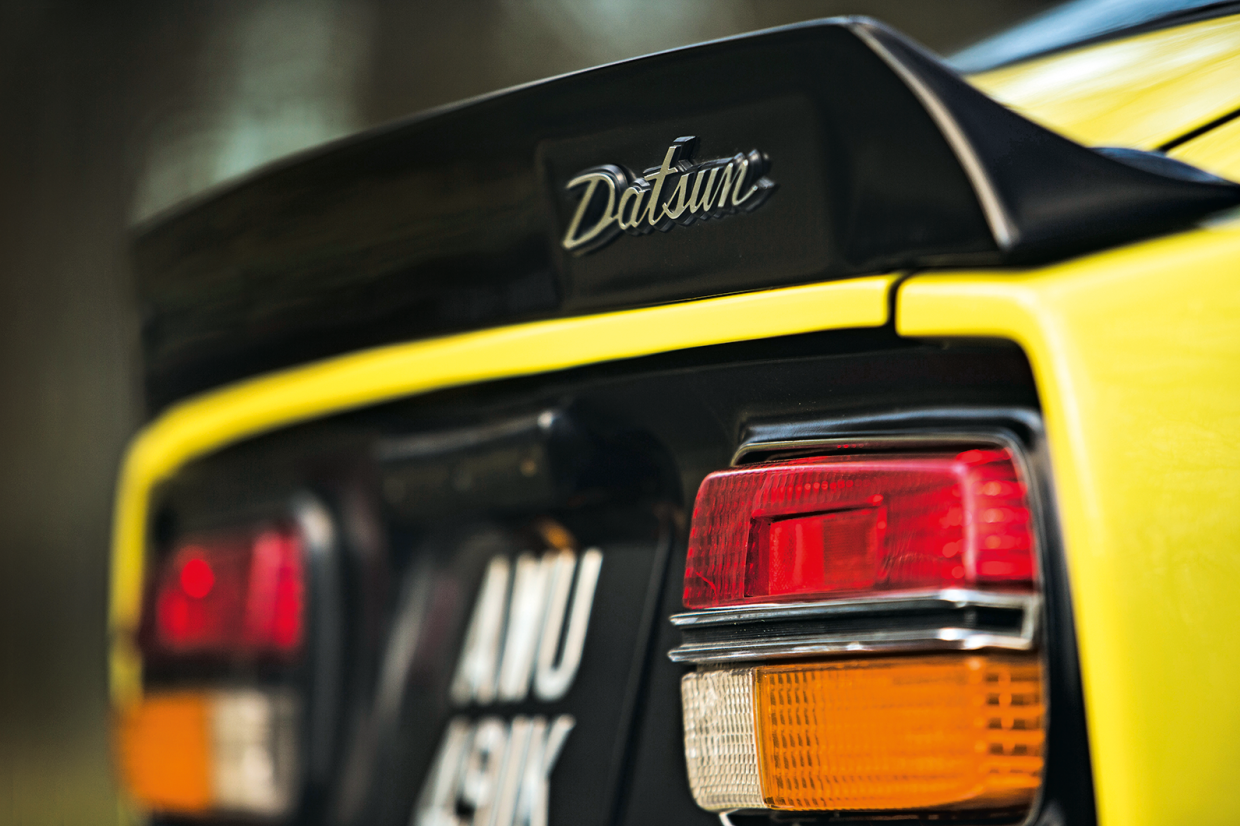 That the 240Z had North America firmly in its sights almost from the point of inception was due in no small part to impassioned lobbying of Nissan’s forward-thinking US chief, Yutaka Katayama.

Having spent time in the country, ‘Mr K’ was remarkably in tune with the American market and served as a bridge between Tokyo and the States, helping to steer development in a direction that prepared the car for success abroad.

Sadly, this included sidestepping the sublime Prince-developed four-valve, triple-carb, twin-cam 2-litre S20 engine in favour of something more palatable in the land of the Big Mac and aerosol cheese.

The twin-cam screamer did find a home in the Skyline GT-R and the Japan-only quasi-racer Z432, but the mass-market Z instead received the 2.4-litre L24, a muscular straight-six with a cubic capacity that wouldn’t spook American buyers more accustomed to big V8s. 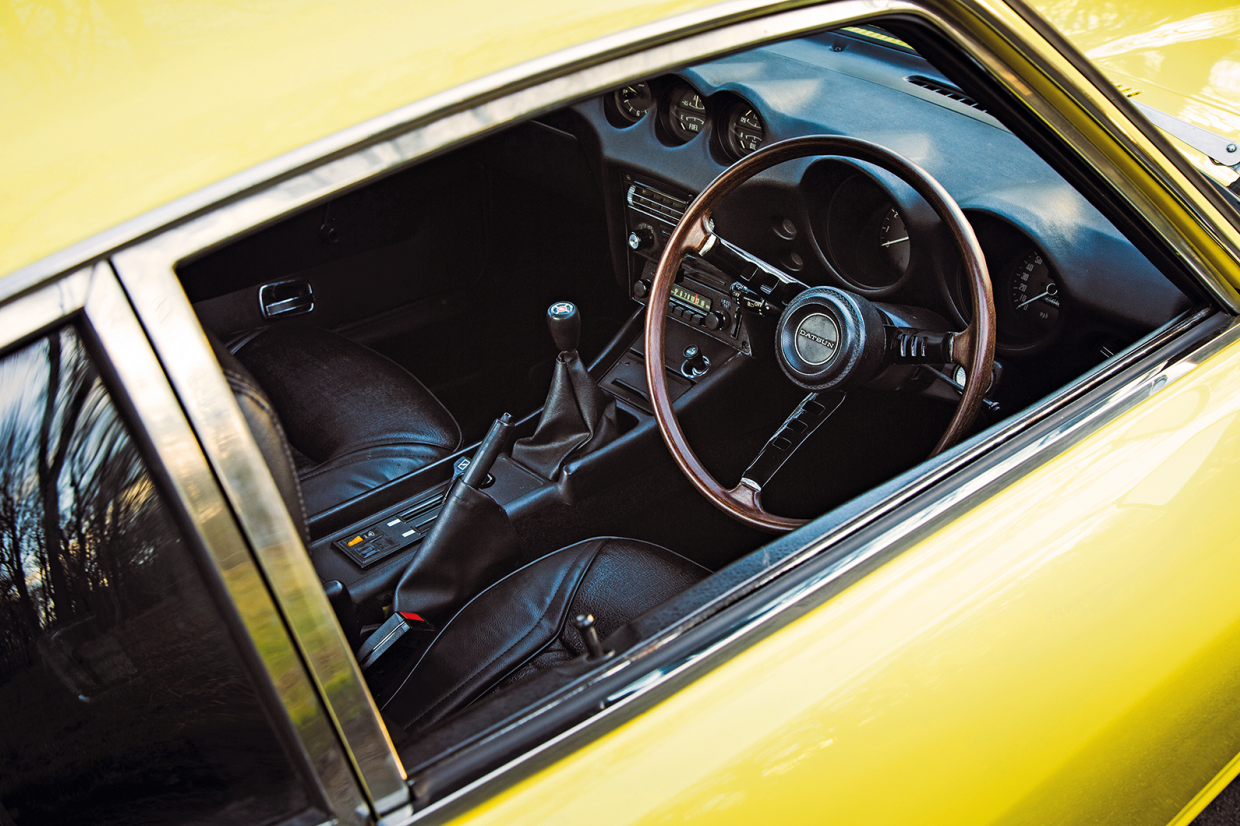 Few interiors capture the essence of the 1970s grand tourer in quite the same way as the 240Z, the long doors giving access to two low-slung vinyl chairs in a cockpit that feels both familiar and comfortable.

The tall, shapely seats are reminiscent of those in the Mazda MX-5, and are more accommodating than they look – Road & Track’s 6ft 2in road tester gave the coupé ‘10/10’ for interior comfort in 1970 and it’s hard to disagree.

The driving position is perfect, giving a superb view of the deep-set instruments in the lavishly moulded dashboard and out over the rakishly dished, dark-stained wooden wheel to the long, sculpted bonnet beyond. 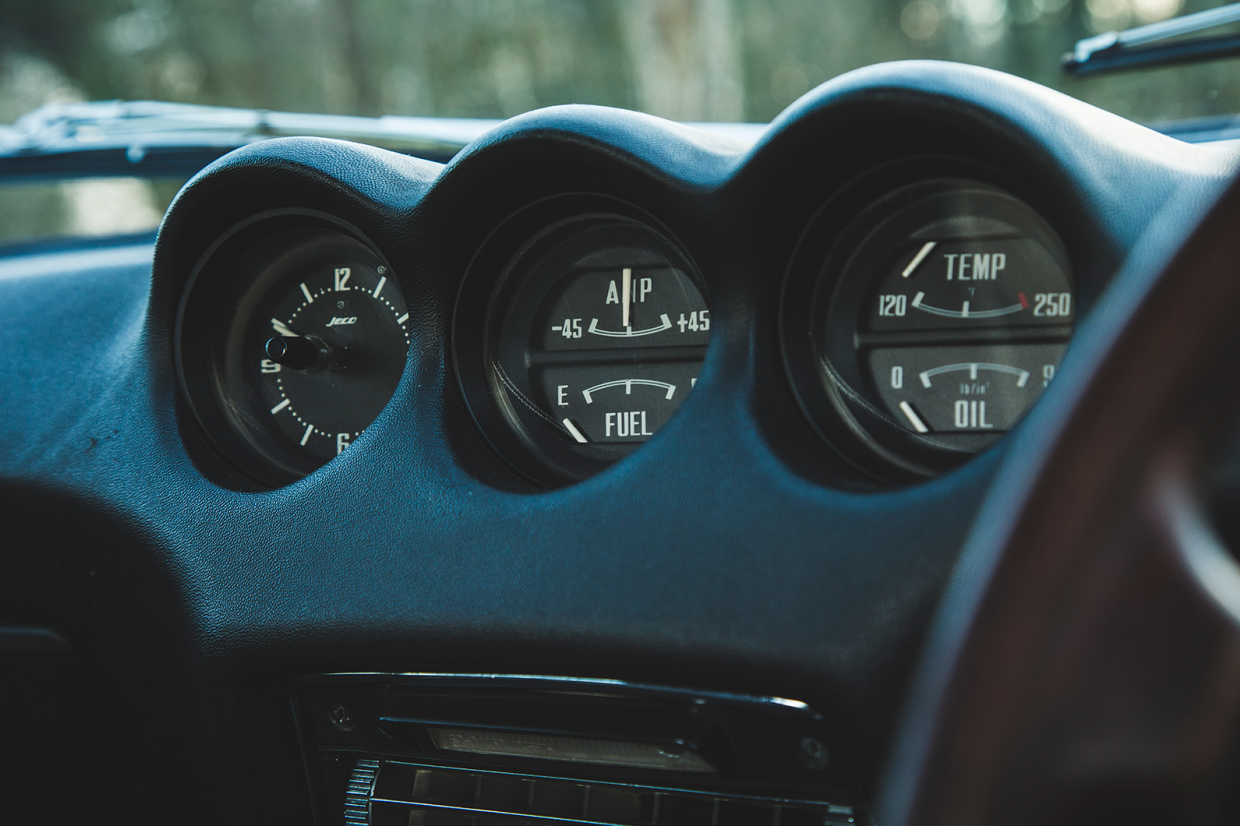 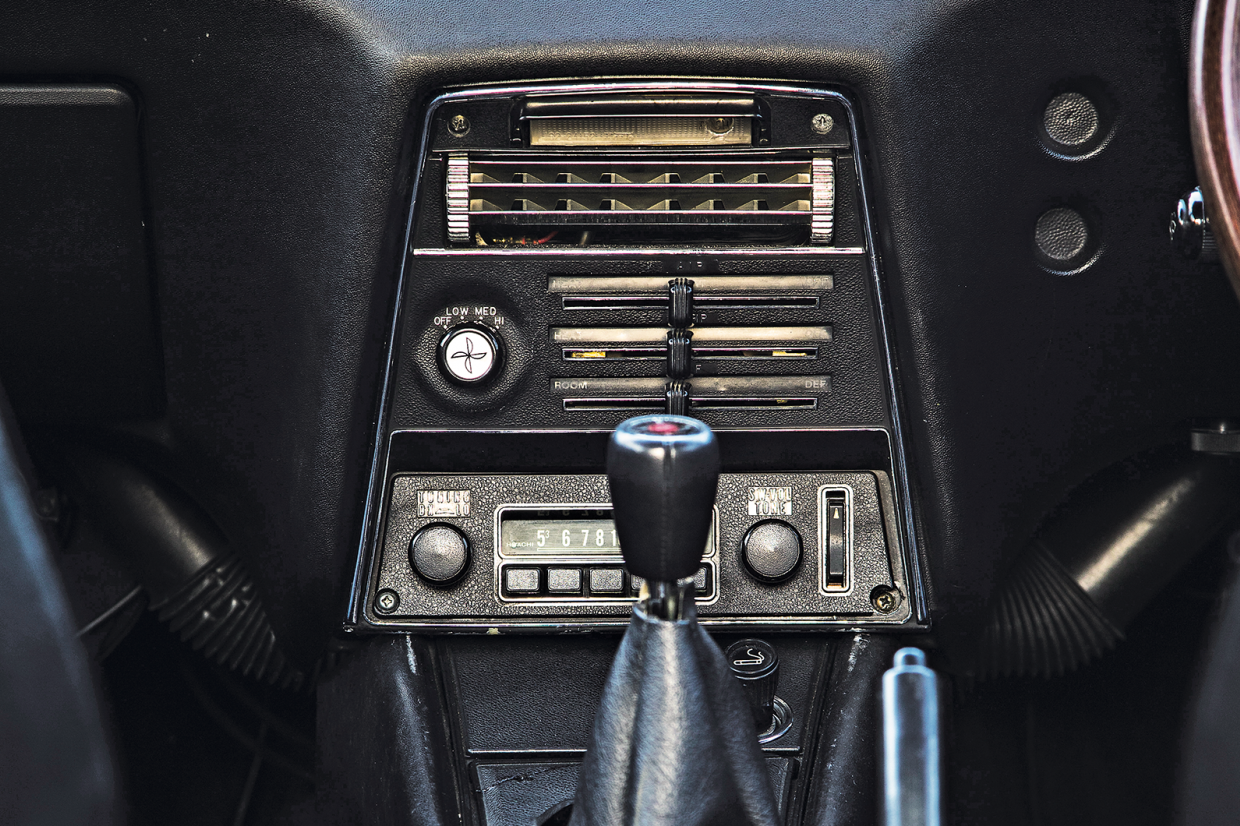 Values have risen dramatically in the past 10 years, pushing the 240Z from an affordable alternative to straight-six Brits such as the Triumph GT6 and MGC GT to a borderline exotic – so the chance to spend a full day with one of the best examples, straight from the heritage collection of its manufacturer, is a rare treat.

The Sunshine Yellow car owned by Nissan UK has undergone a full restoration in recent years to exacting standards, with a focus on originality.

A few modifications have slipped through the net, however – including a racy set of Minilite wheels, all the rage as an aftermarket upgrade when the Datsun was new. 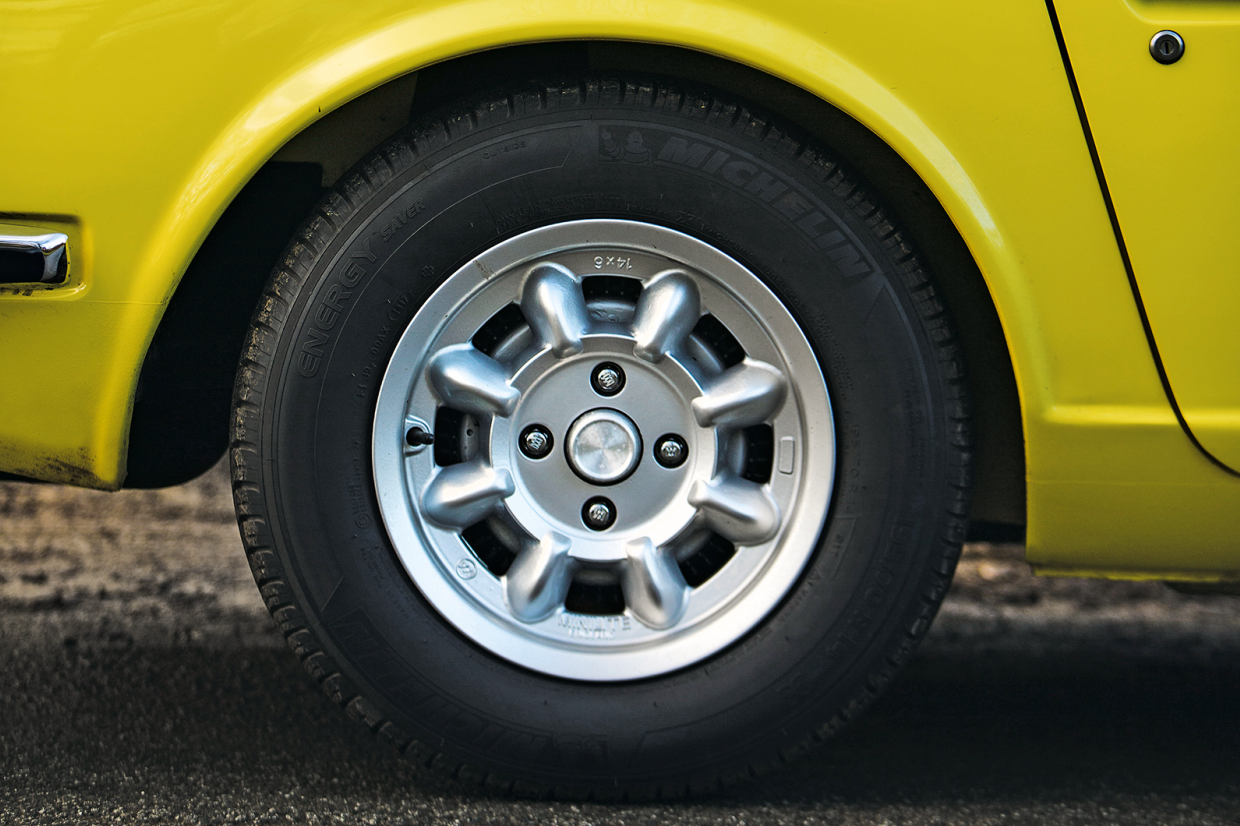 The second deviation from factory spec only becomes clear when you turn the key (after the obligatory few pumps of the accelerator to prime the carburettors).

A purposeful bark and greedy induction noise announce the presence of triple 40DCOE Webers, which replace the original Hitachis, an SU derivative built under licence in Japan.

The result is a typically lumpy idle from cold, and you have to tickle the throttle until the fluids warm through.

As well as the intoxicating noise and underbonnet bling, the new carbs offer better fuelling and should improve on the 151bhp quoted by Datsun in period – itself enough to propel the coupé from rest to 60mph in 8 secs, and on to a top speed of 125mph. 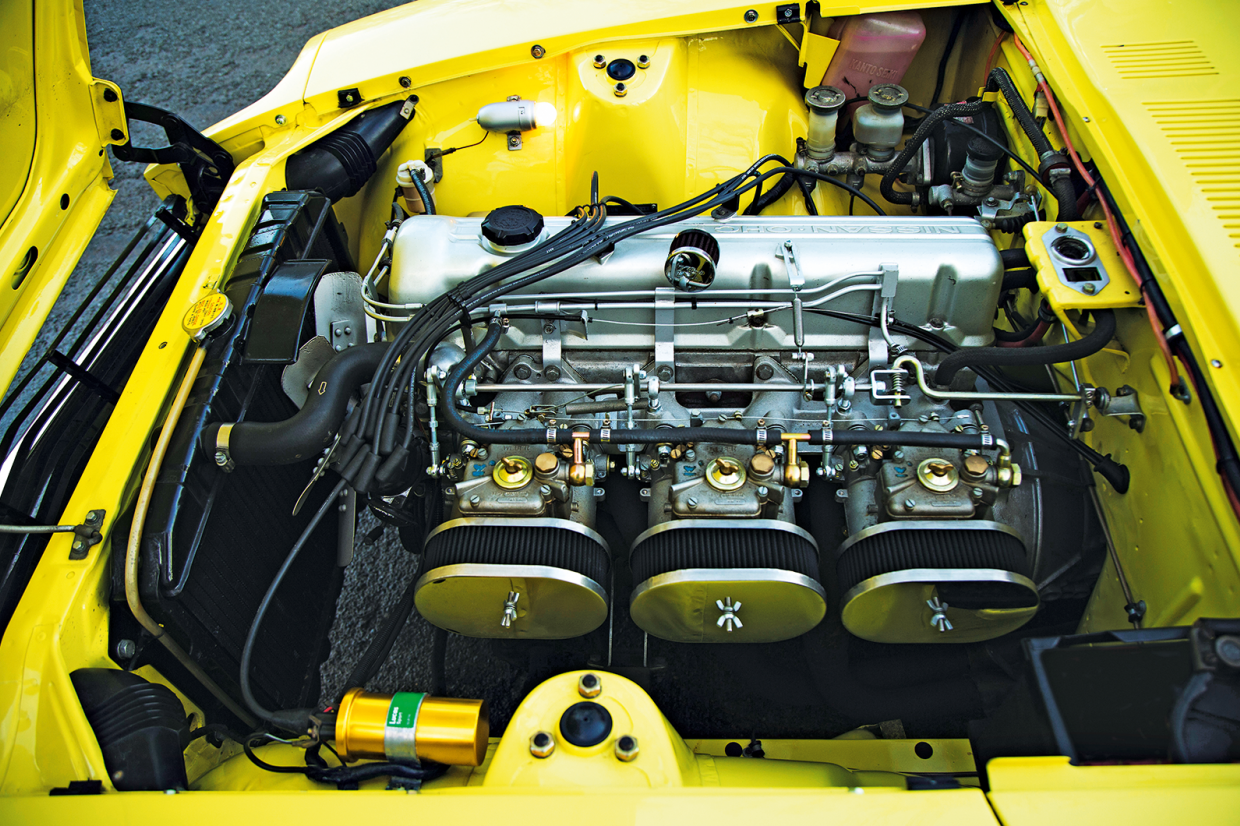 It certainly feels quick enough on the road, with a sharp throttle response beautifully complementing the 2.4-litre big ‘six’.

There’s torque in abundance; plant your right foot and it hauls like a freight train, a linear charge that continues to 5500rpm and beyond, where the triple Webers really begin to earn their keep.

The engine has given its best long before the 7000rpm redline, but you’ll wind it up all the same, if only to be rewarded with that glorious six-cylinder aural salute.

The faster it spins, the angrier it seems to sound, transforming from slightly gruff and uninspiring to something truly spine-tingling. 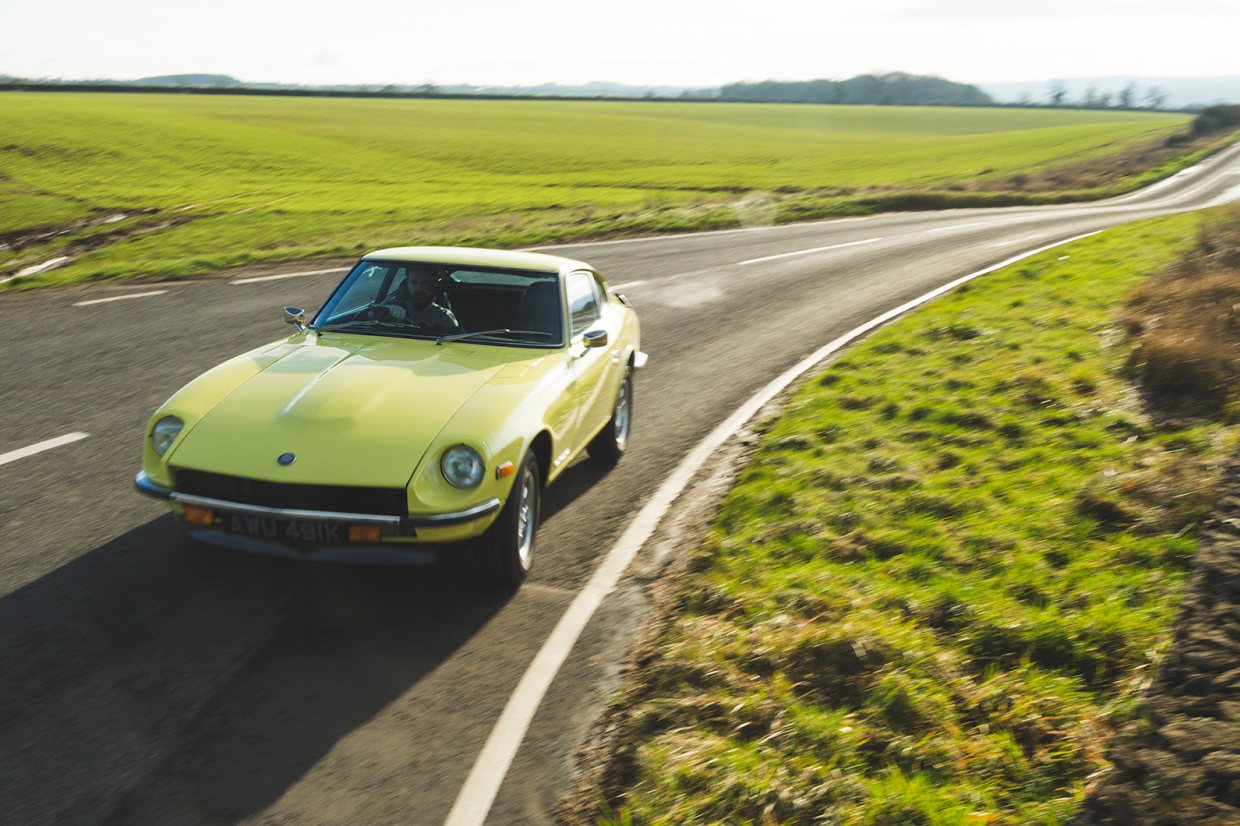 The Z’s designers didn’t think that ‘ostentatious explosions’ were suitable for their concept, so the exhaust noise is relatively muted, which serves only to shine a spotlight on the magical roar from under the bonnet.

Steering is something of an enigma in the Z. Original designs called for a caster angle of 6º to aid straight-line stability, but that resulted in nearly twice the steering effort required compared to the Porsche 911.

The angle was halved for production, but the helm remains surprisingly weighty at low speeds, only easing up when you’re really pressing on; it isn’t long before your hands become sore from the effort of wrestling the wheel left and right.

A slightly reluctant and rubbery gearchange contributes to the problem; you have to be assured and confident with each ratio, but it’s sweet enough and doesn’t mind being hurried. 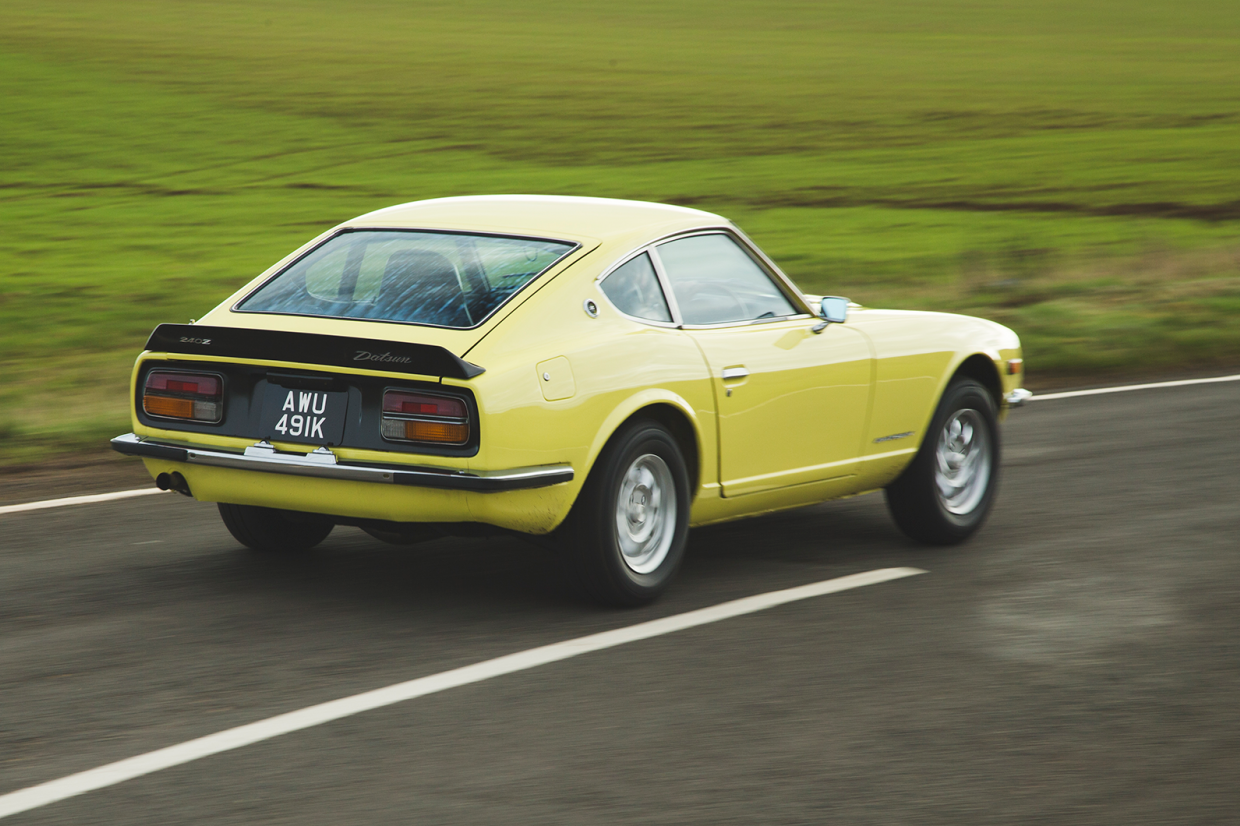 These quirks are easy to forgive on the undulating back-roads of Oxfordshire, a winding network of S-bends, hills and hollows that becomes, for an afternoon at least, your private test track.

Pick up the speed and there’s a bias towards understeer, but turn in harder and the front end hooks up nicely, with surprisingly little body roll.

The steering is a bit fluffy dead ahead, but like the gearbox it rewards a firmer hand, responding faithfully when the wheel loads up. 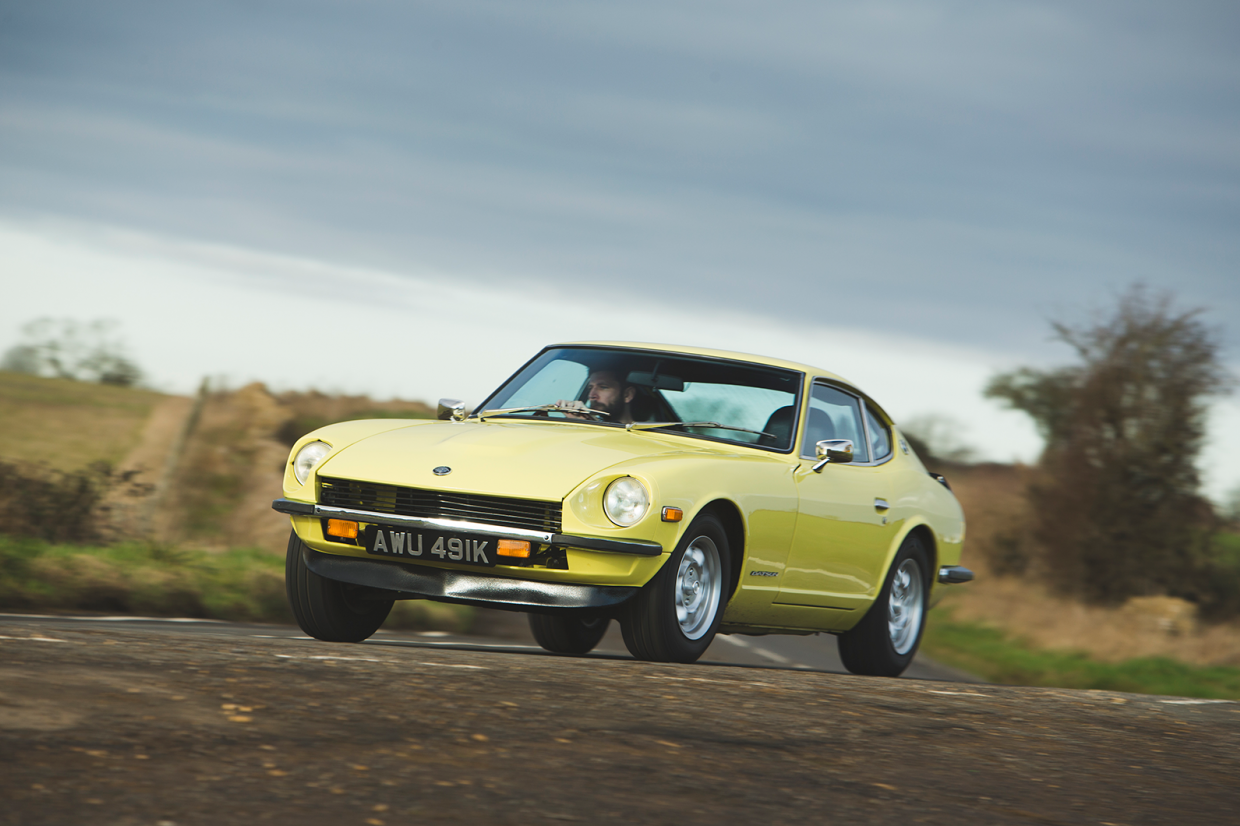 Each change of direction is accompanied by a perfectly balanced shift of weight, like a boxer dancing on his toes.

Over rougher surfaces and in tighter bends things become a bit more unsettled, with the scuttle shake you expect of any ’60s sports car, but broadly the suspension does a decent job of keeping all four wheels on the Tarmac.

Most owners will have upgraded these components to tidy the handling and release the chassis’ potential, but even in factory trim – insisted upon by the team at Nissan – the Z carries itself well, absorbing the worst of the bumps while remaining sharp enough for a grin to be planted permanently on your face. 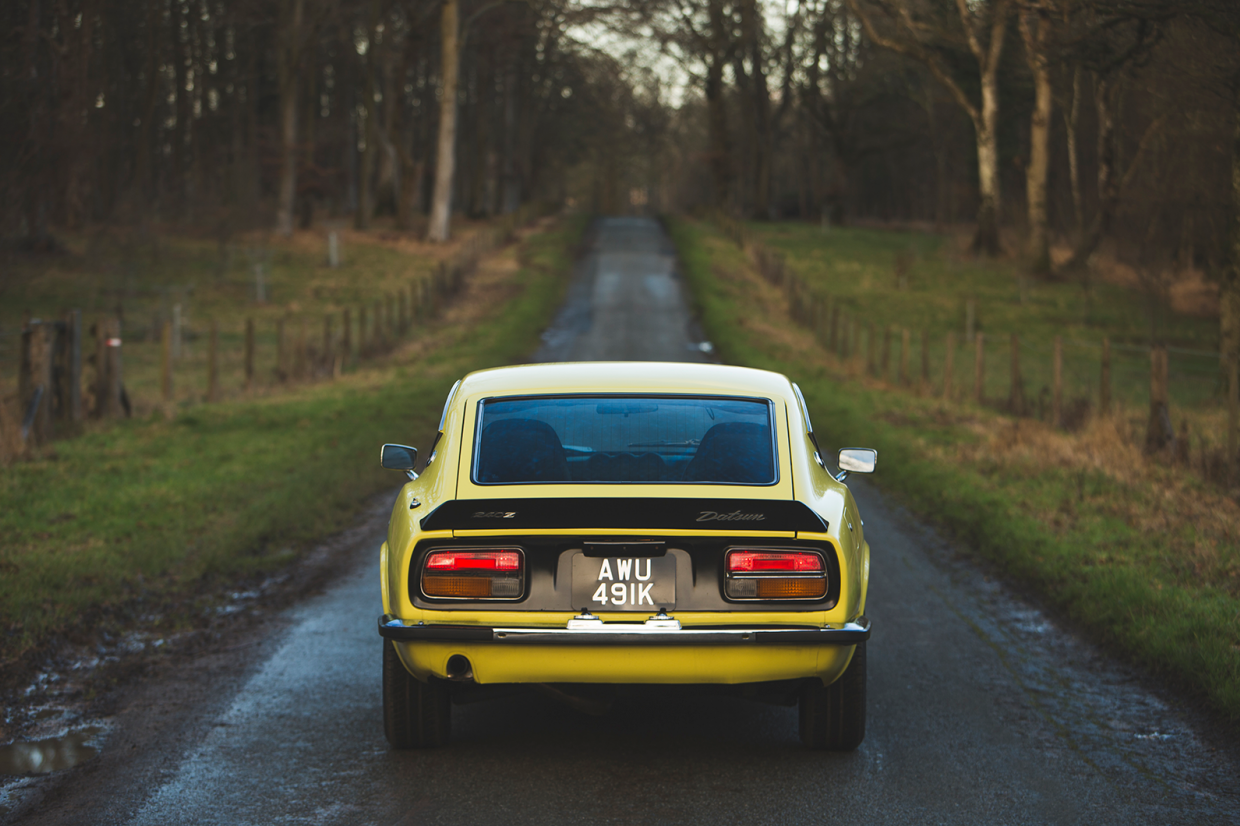 Buying a nice one today will set you back the thick end of £30,000; even more if you want the very best.

It’s a problem that afflicted the car in period, too, at least in this country.

It’s noteworthy that Datsun sold any at all, let alone the 1600 it actually shifted. 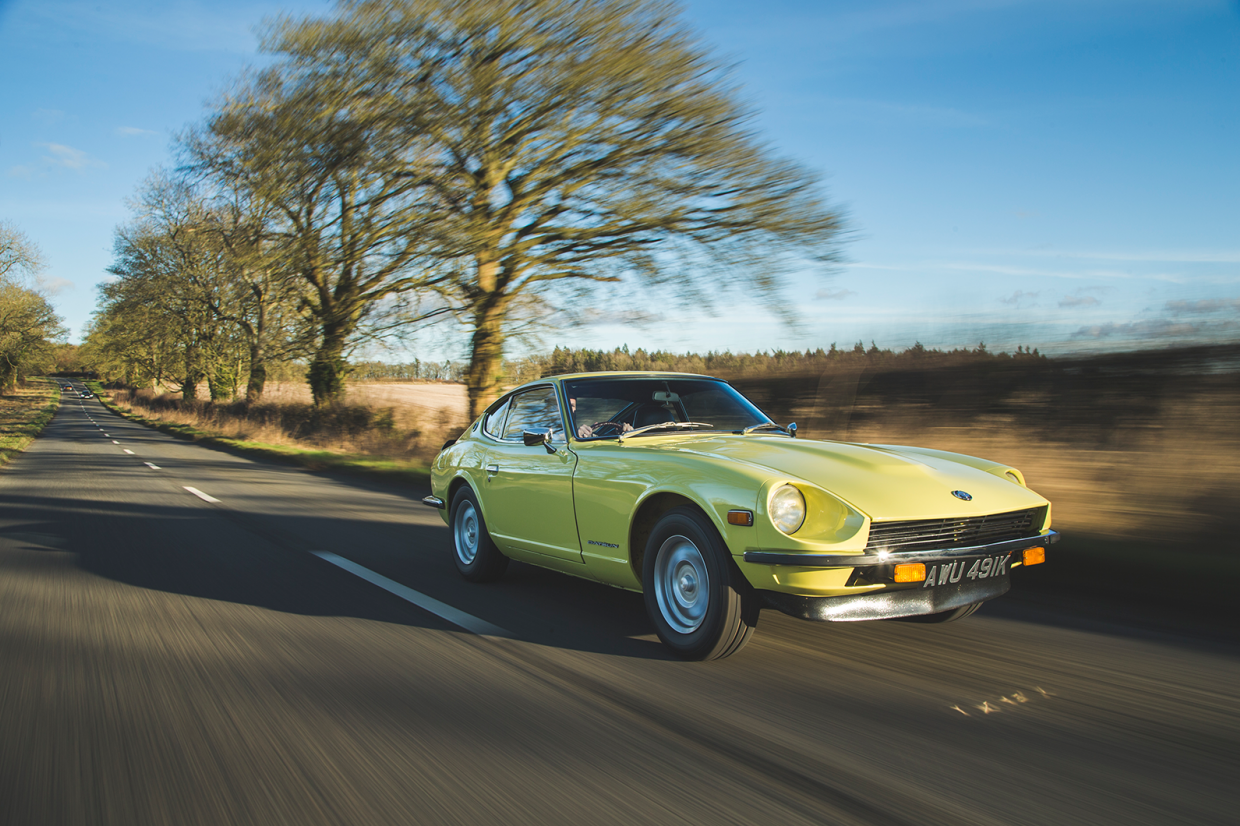 To properly measure the car’s success you have to look at its target market: the United States.

There, the Datsun represented staggering value, at almost half the cost of a Mercedes-Benz 280SL.

If you wanted a home-grown Corvette, you’d have to increase your budget by 50% – even more still to get an E-type or 911T. 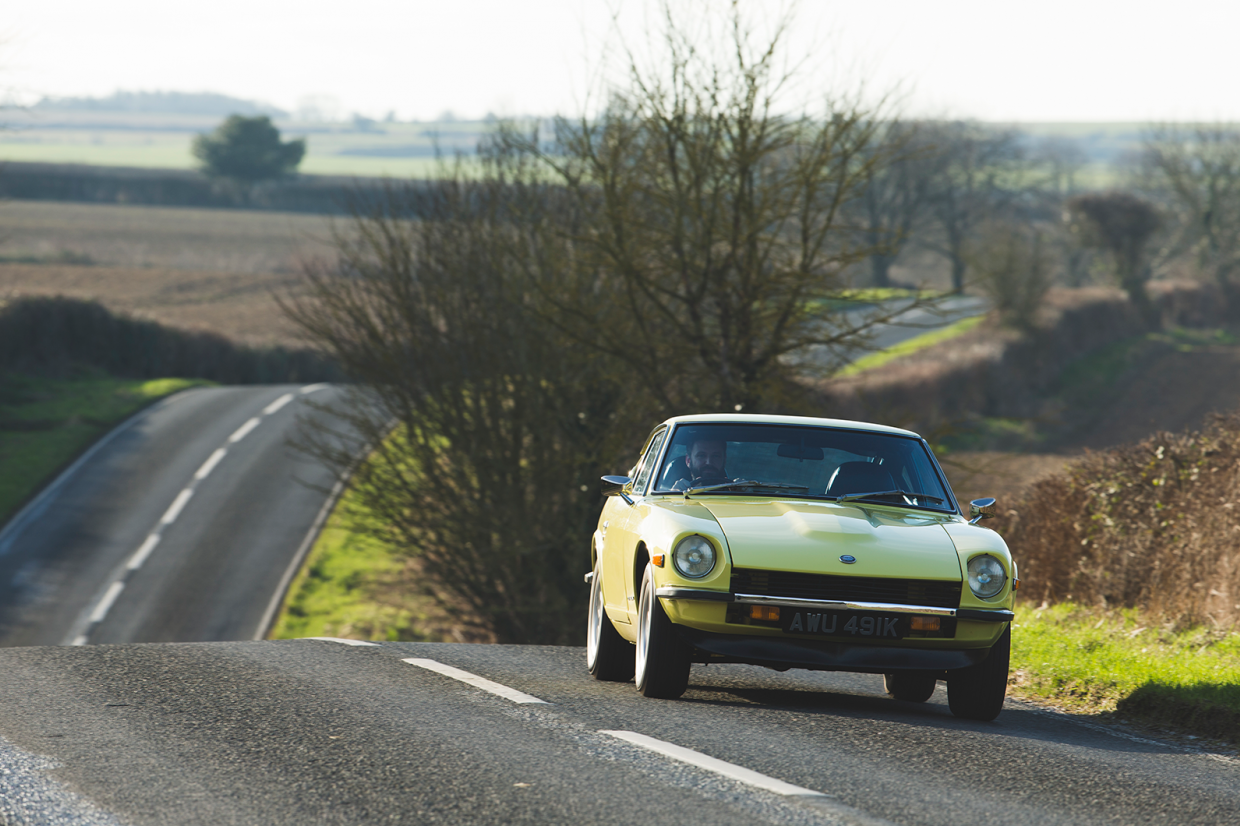 It takes an almost never-ending string of adjectives to sum up the success of the 240Z.

But the final, and most important, is also the most surprising, and not one readily associated with such a superbly built and well-equipped sports car: cheap.

Thanks to Nissan UK; The Z Farm 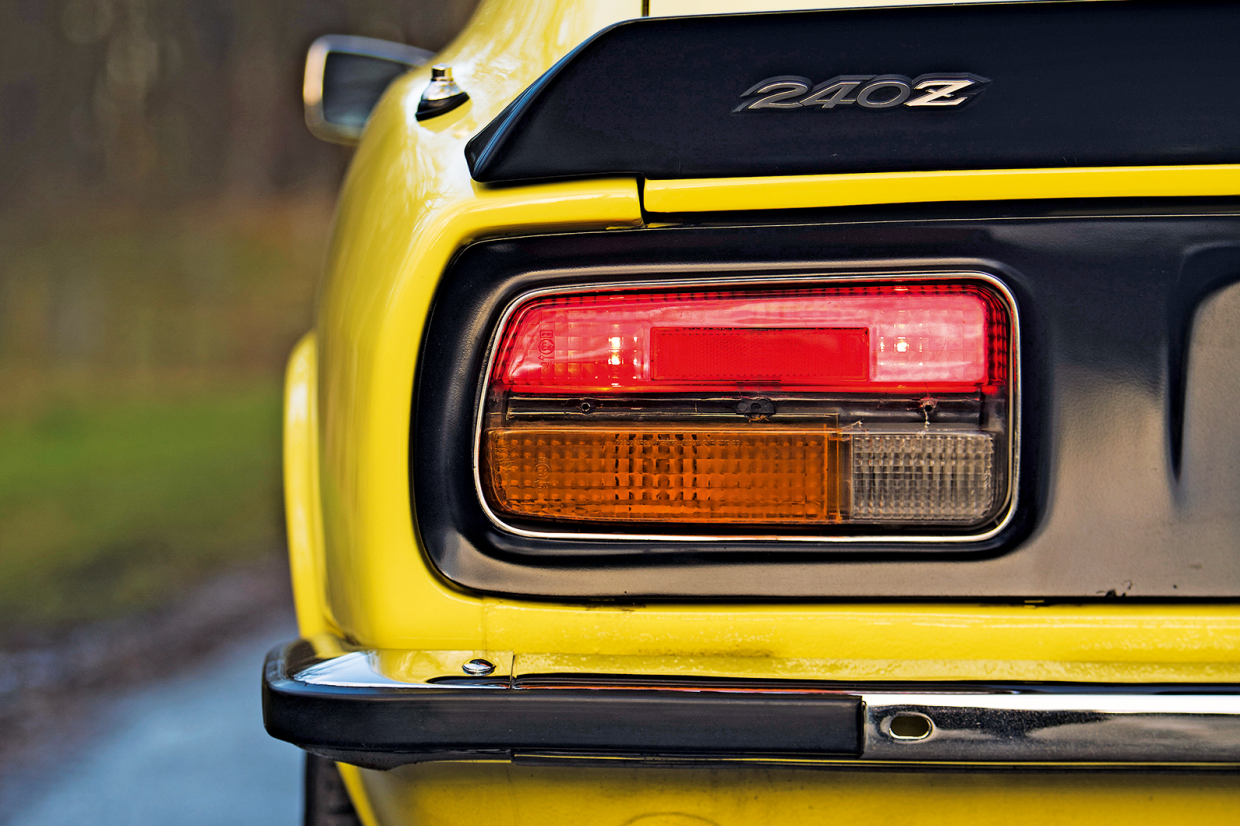 *Prices correct at date of publication 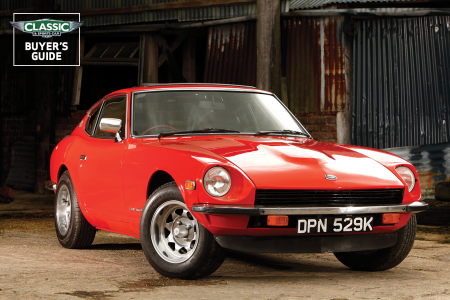 Jaguar reunited: inside the September 2020 issue of C&SC