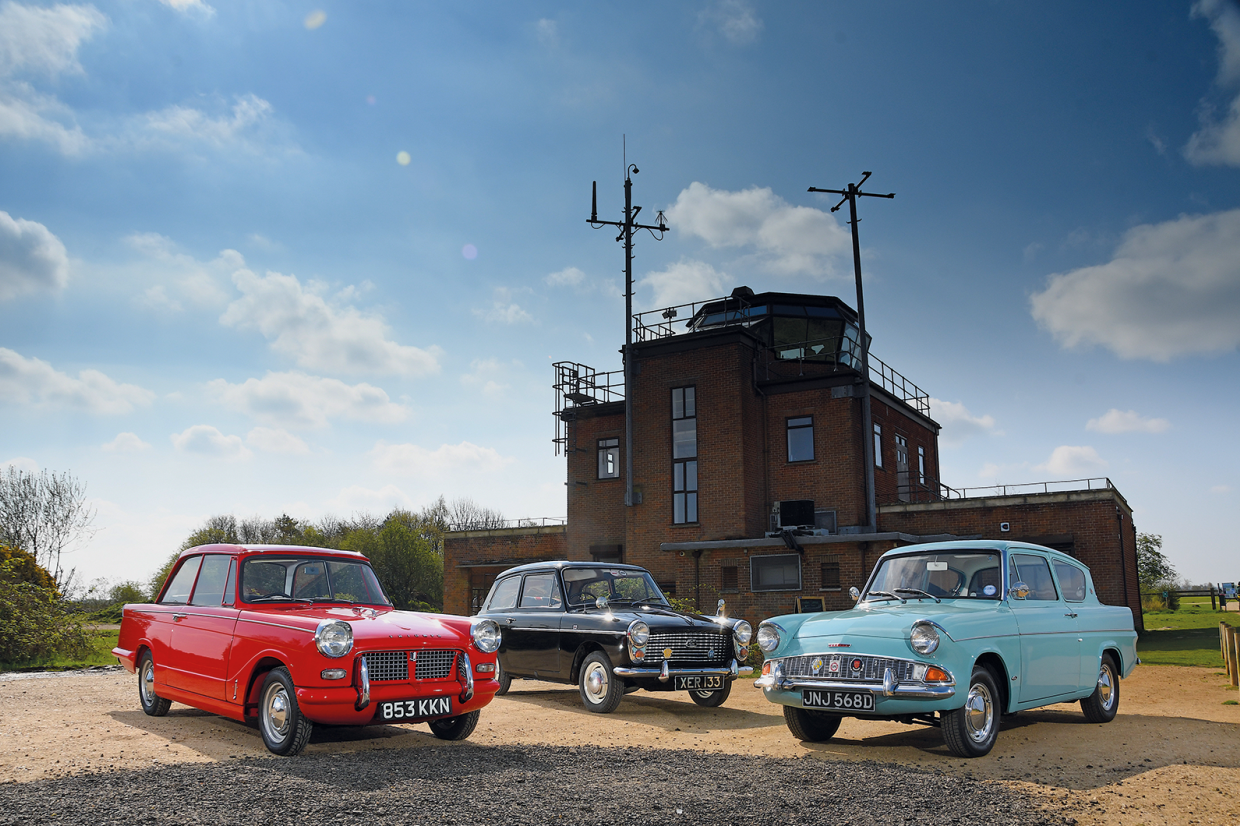 Some cars, such as the Austin A40 ‘Farina’, the Ford Anglia 105E and the Triumph Herald, become so familiar that their initial impact is forgotten.

Their predecessors – the A35, 100E and Standard 8, 10 and Pennant – were honourable cars all, but by the close of the ’50s they smacked of a past era of smog, demob suits and ration books.

The latest models from Longbridge, Canley and Dagenham promised a sense of freedom: for a reasonable monthly payment, you too could be enjoying the open road. 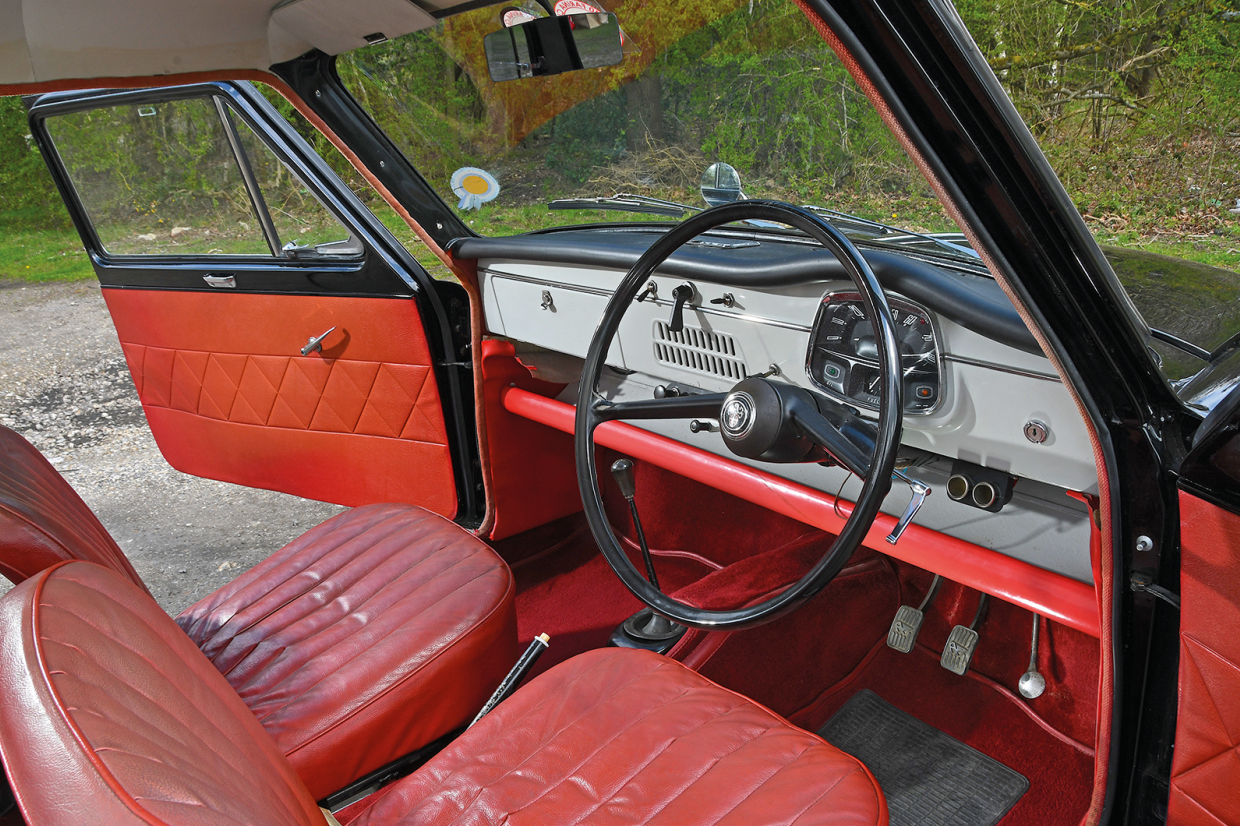 It took its time to become a classic, but it was a truly deserved status – not least because of the immaculate timing of its debut in September 1958, when Italian design was becoming synonymous with the Affluent Society.

The original Teds were either mutating into Ton-Up Boys or retreating to the provinces; tailors were offering three-button suits; and ‘Modernists’ donned their shades for a trip to the grocer.

An A40 Farina buyer may have preferred a nice cup of tea to an espresso in the Heaven and Hell Coffee Lounge, but they weren’t entirely hidebound by tradition.

The British Motor Corporation commenced work on the ADO8 in 1955, and it was to be its first product styled by Battista ‘Pinin’ Farina’s concern.

When the new A40 took a bow, BMC made the far from outlandish claim that it presented ‘a glimpse into the future of small car styling’. 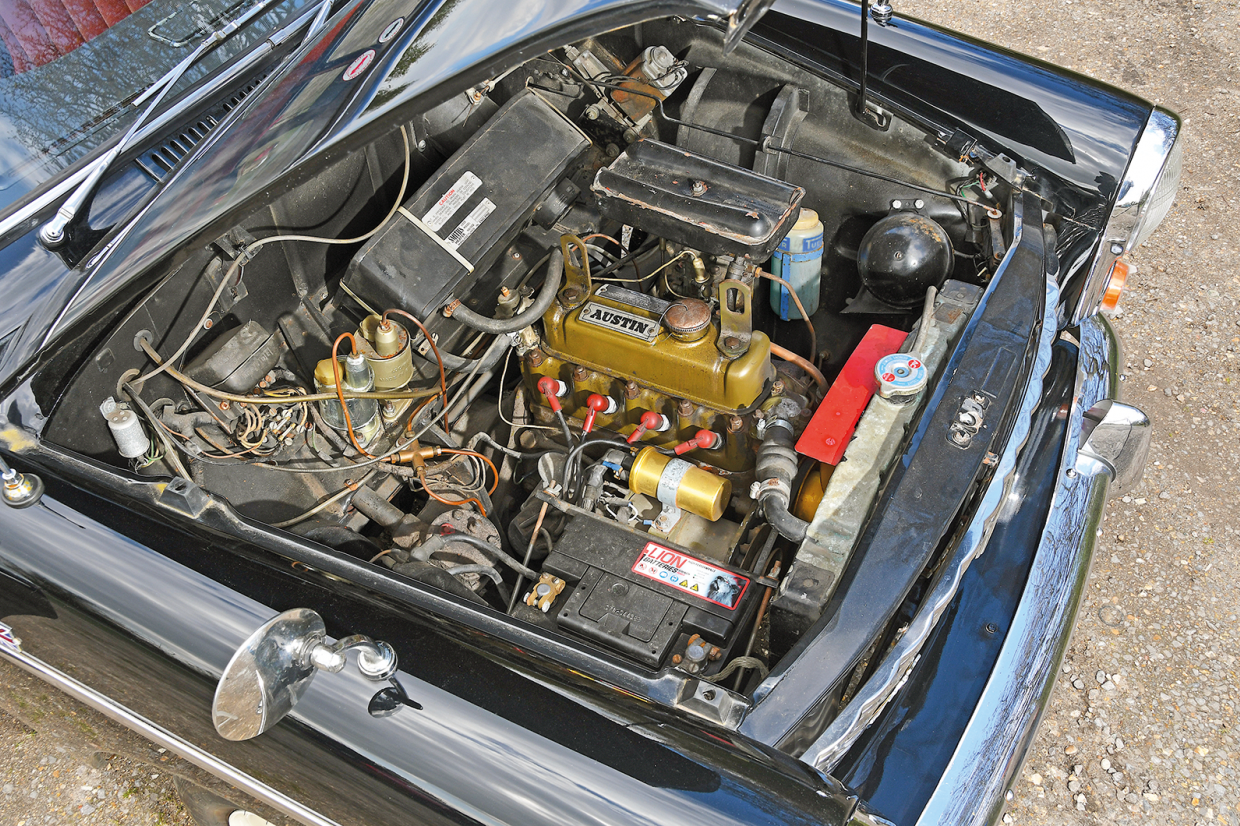 More than 60 years later, the Austin’s success in simultaneously maintaining a respectable image while appearing up-to-the-minute is clear.

The engine, suspension and rear brakes were sourced from the A35, but in terms of both looks and ethos the Farina was a car that, as the adverts proclaimed, ‘Moves in dress circles.’ Where would late-’50s British sales copy be without recourse to naked snobbery?

As with the Ford and the Triumph, one of the first elements you notice about the Austin is the extensive glass area providing a ‘cyclorama view’.

The A40 was a far cry from so many vehicles of the early part of the decade, in which passengers felt as if they were looking through a porthole.

A further difference was that two-box styling. In case of complaints from traditionalists that the Austin was devoid of a luggage compartment, the dealer could display the virtues of the folding rear seat: ‘The Austin A40 is not just a luggage boot tacked onto a car.’ 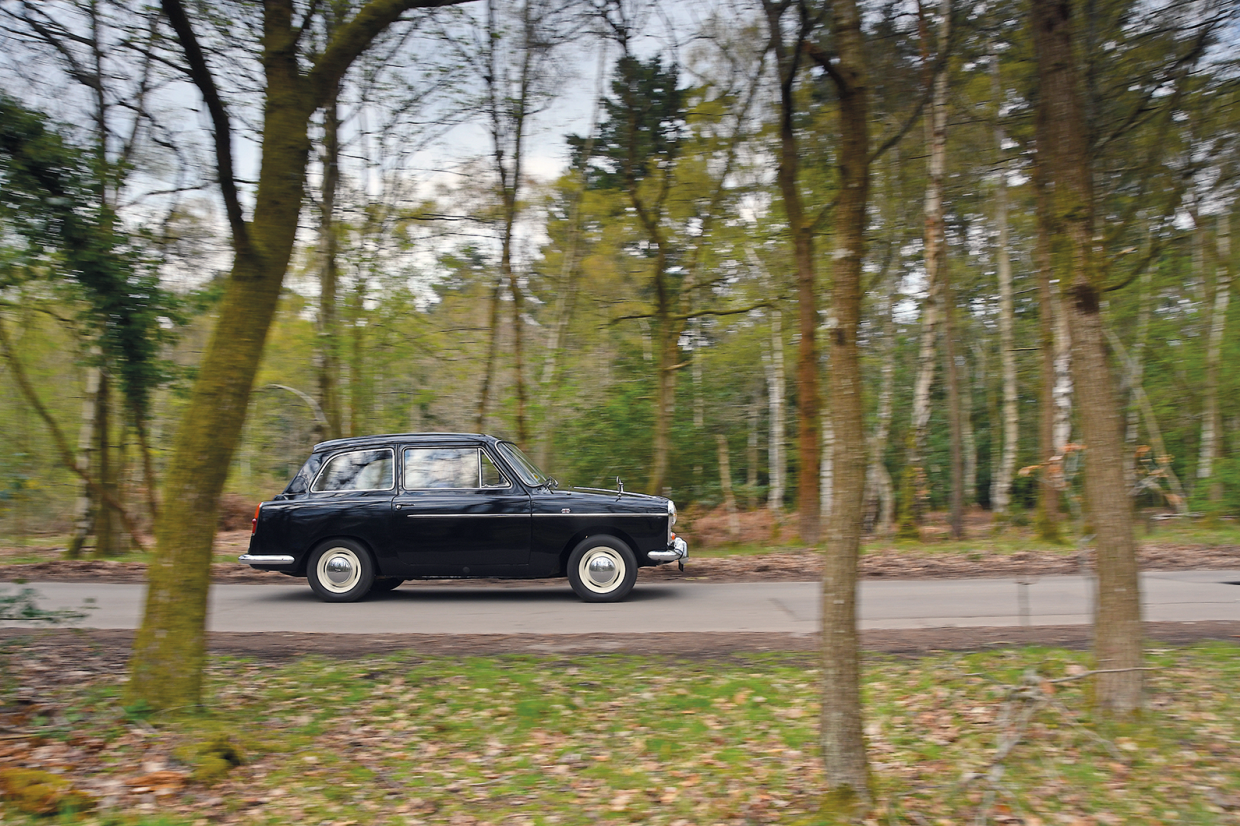 In 1959 BMC introduced the Countryman with its split tailgate, then two years later the Farina was facelifted for the MkII.

The 1098cc A-series engine was slotted in for 1962, and in ’63 industry observers were surprised that the Austin-badged ADO16 didn’t replace the A40.

Production soldiered on until late ’67, by which time the once mildly radical Austin was seen as the epitome of suburban respectability.

The De Luxe list of fixtures and fittings includes opening rear windows and a second sunvisor, yet the A40 remains the most Spartan of our trio.

The counterbalanced panes in the front doors are a notable cost-cutting touch, and the ‘orange segment’ speedometer is derived from the A35’s.

“It’s very entertaining to drive thanks to the relatively big wheel, responsive steering and great visibility,” she says. “It’s an active experience – as with any older car, you have to plan ahead. It is so lovely to actually have to drive a car.” 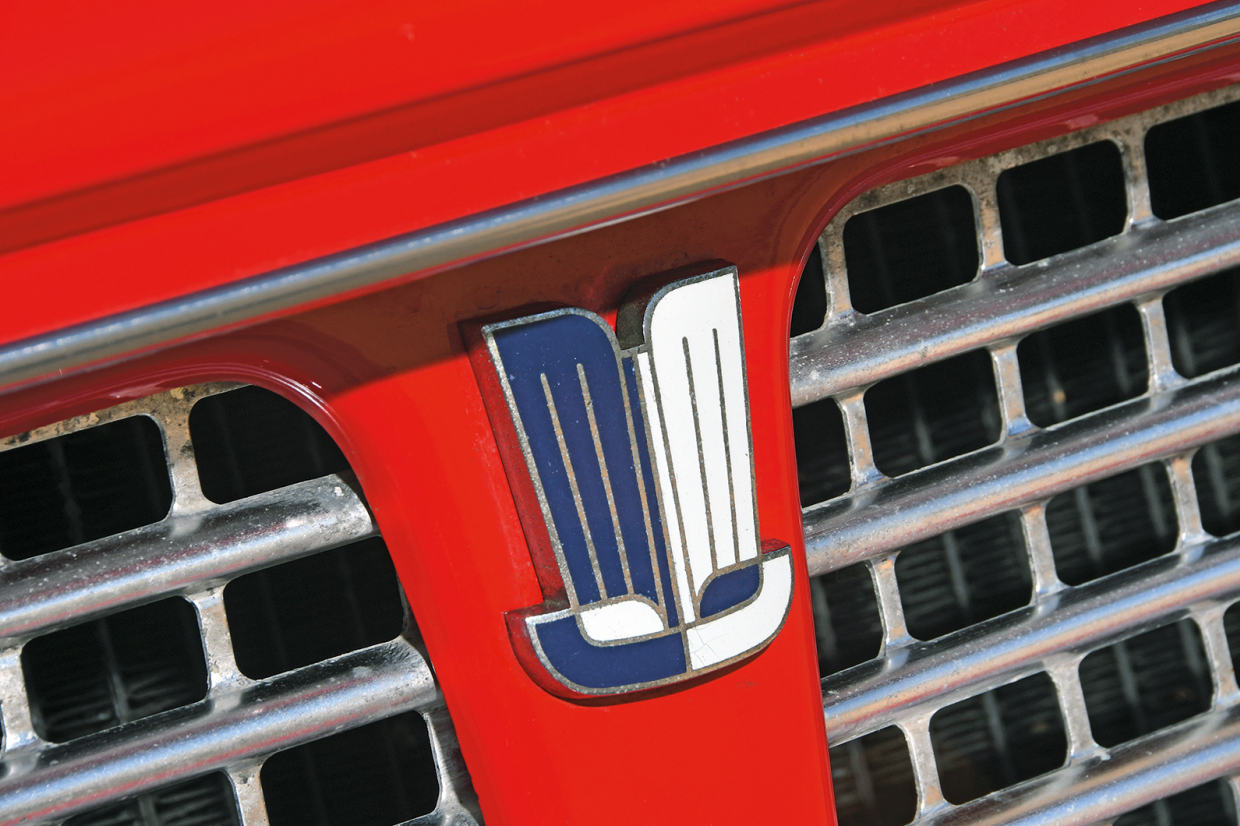 Nearly seven months after the launch of the Austin, various dealers and scribes were invited by Standard-Triumph to a very special revue at the Royal Albert Hall.

The footage can be seen on YouTube and, although the entertainment resembled Sunday Night at the London Palladium reinterpreted by Hammer Film Productions, a stellar moment was the building of a Herald Coupé on stage in less than five minutes.

This was to emphasise the virtues of its separate chassis, a masterstroke on the part of chief engineer Harry Webster.

‘Project Zobo’ was initially intended to employ monocoque construction, but this was rendered impractical by BMC’s ownership of body builder Fisher and Ludlow so a chassis was more economically viable.

S-T claimed the set-up offered strength and safety, and it would also facilitate CKD (completely knocked down) assembly overseas. 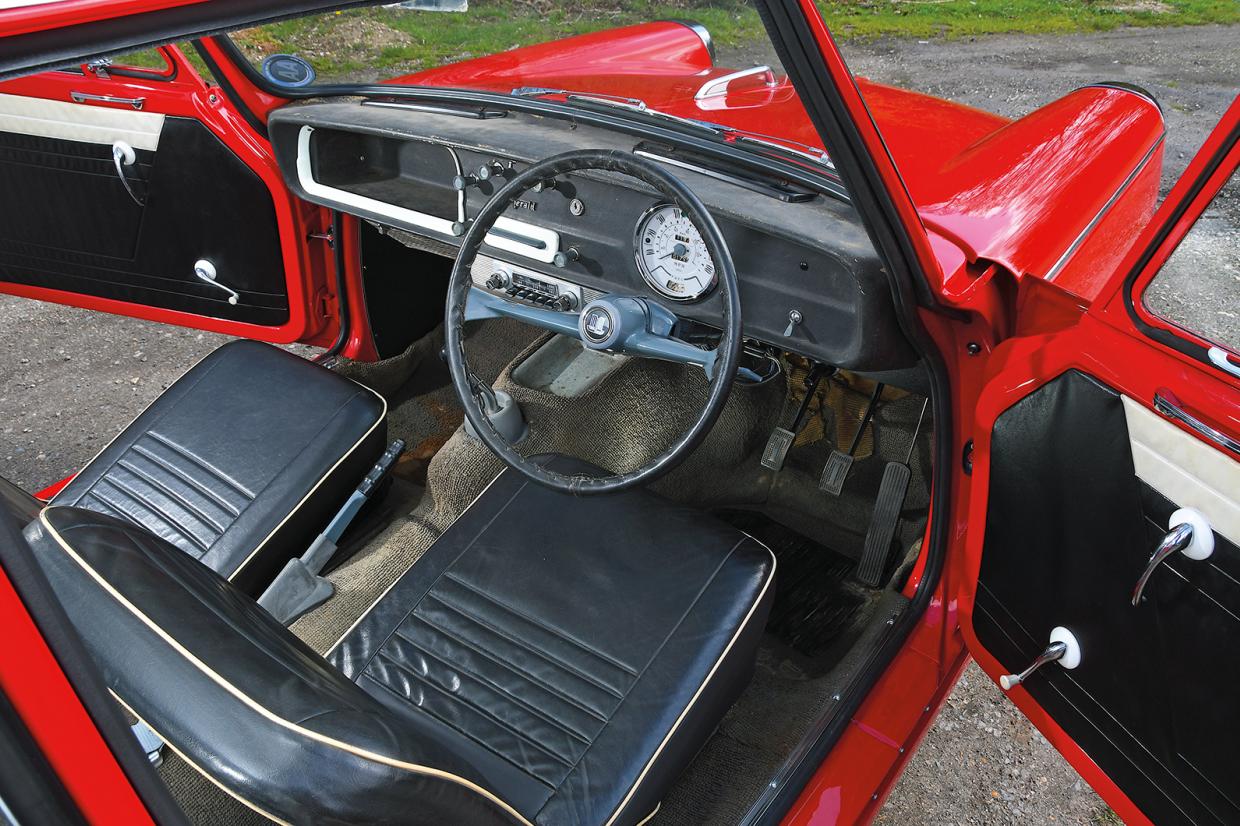 This ‘new experience in motoring’ was the first Triumph with Giovanni Michelotti coachwork, and his crisp-cut lines cloaked a blend of the old and the new.

The Standard 10’s 948cc powerplant and gearbox were eminently familiar, but rack-and-pinion steering was a talking point, as was the all-independent suspension – a first for a compact, mass-produced British car.

The saloon arrived a few weeks after the Coupé, and this handsome Signal Red model dates from 1960.

“I began Triumphing at university when I bought a secondhand Vitesse,” says Clive Bergman, who added the 948 to his fleet in 2004.

“The visibility is superb, and the gearchange is lovely provided it’s properly maintained.”

The specification included a heater, windscreen washers, adjustable steering and front seats that could be arranged in 72 different positions. 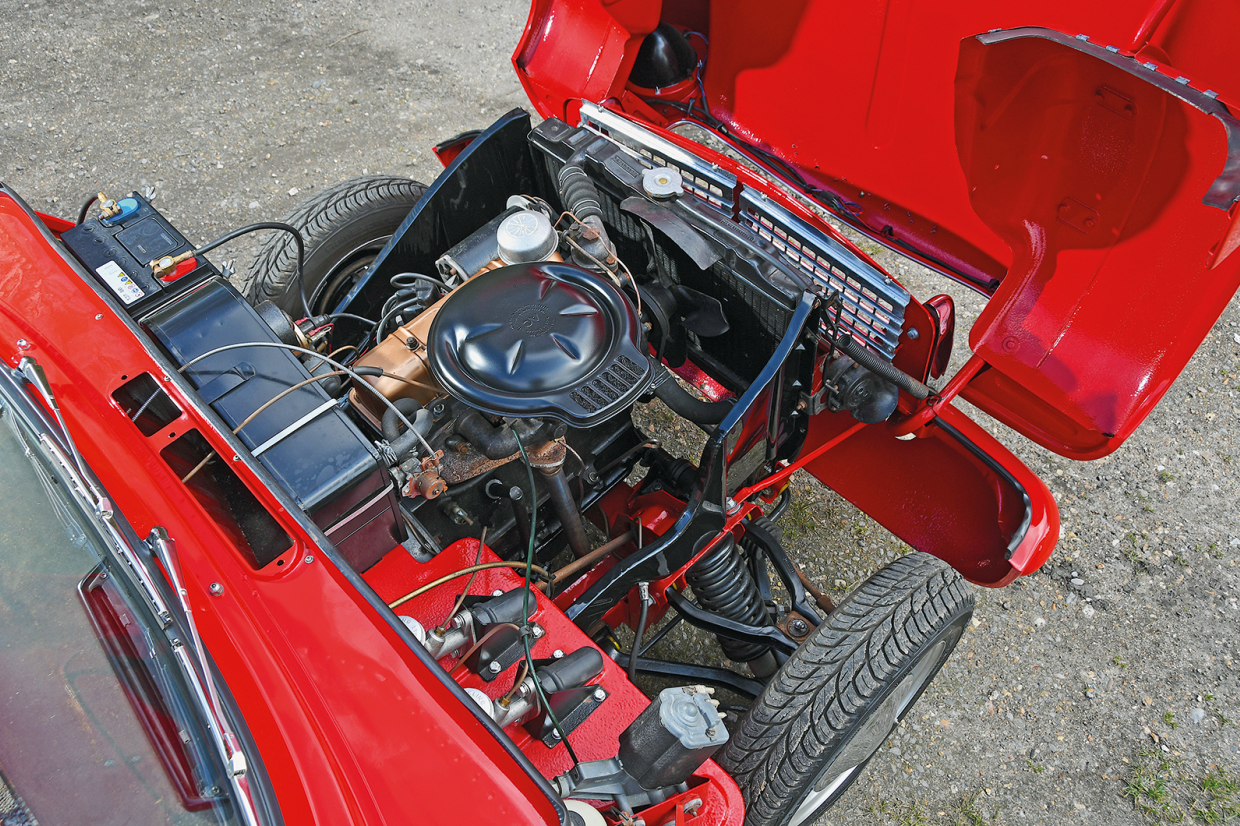 The 948s also featured a folding rear bench and a ‘chip basket’ parcel carrier beneath the glove compartment, and such details justified the Herald’s comparatively high price.

By 1959 it would have been an error of marketing to sell it as a Standard: the Herald was transportation for the sort of person who aspired to a lifestyle that was above the norm.

The original post-war small Triumph was the Mayflower, but that was for retired Majors and anyone who regarded Juke Box Jury as proof that the country was going to the dogs.

The Herald was for the driver who was (moderately) with it, and the marque name bestowed a sporting image on the Herald – even if the 948cc engine was not really associated with high-performance motoring.

The Coupé at least boasted twin carbs, but while the saloon looked fit and ready for the new M1 its 71mph top speed was better suited to B-road motoring or the town centre, where the 25ft turning circle came into its own. 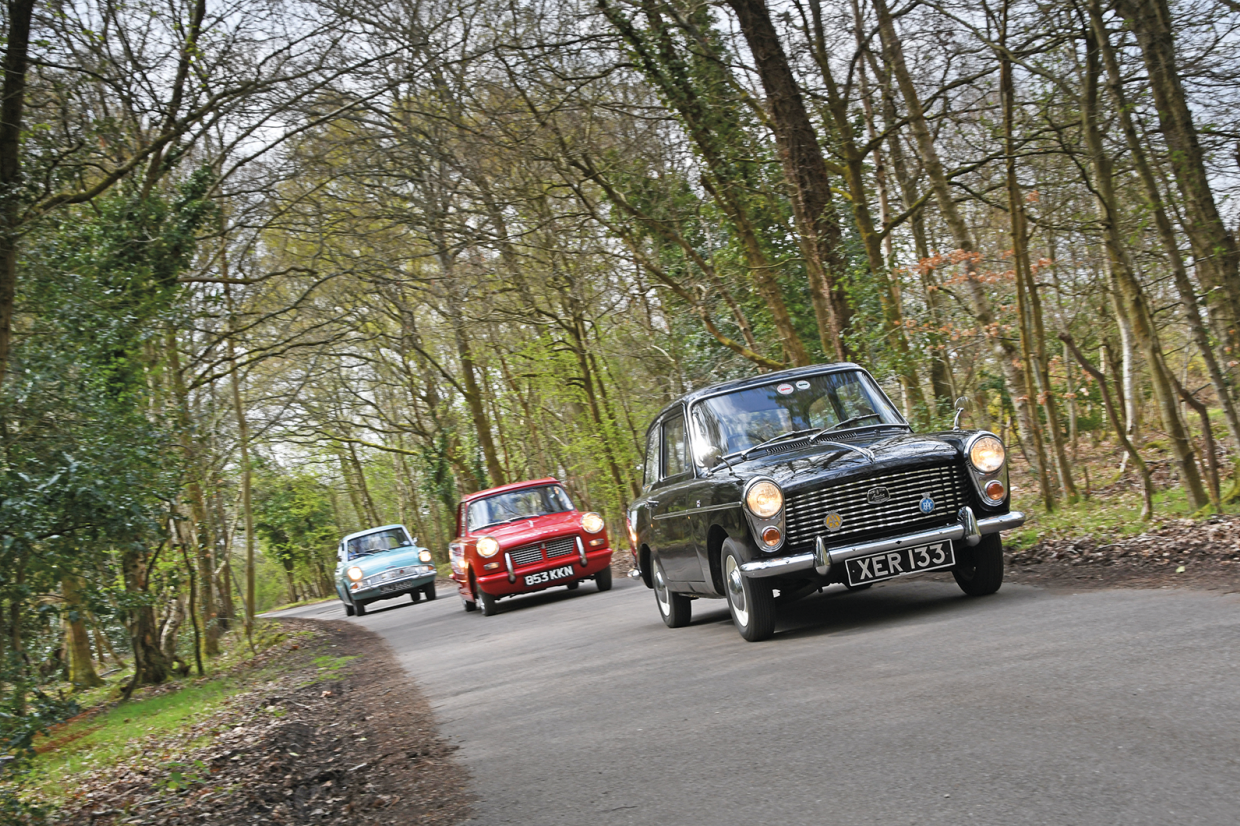 The Leyland Corporation acquired Standard-Triumph in 1960, which permitted the funds to develop the improved 1200 of 1961.

“The difference in performance is relative,” says Bergman, “and I’ve properly rebuilt the engine on my Herald, so it gives its full 34½bhp!

“I enjoy the 948 because it’s the genesis of the Herald family, and for its link to the automotive past. It’s a 1950s rather than ’60s design, and it feels as if it has one foot in the world of austerity motoring despite its smart new suit.”

You can sense the 948’s roots in the engine note, the white-faced speedo and the provision for a starting handle on the front pulley.

Yet this modestly powered Triumph instigated not only a 12-year run of Heralds, but also every Vitesse, Spitfire and GT6. 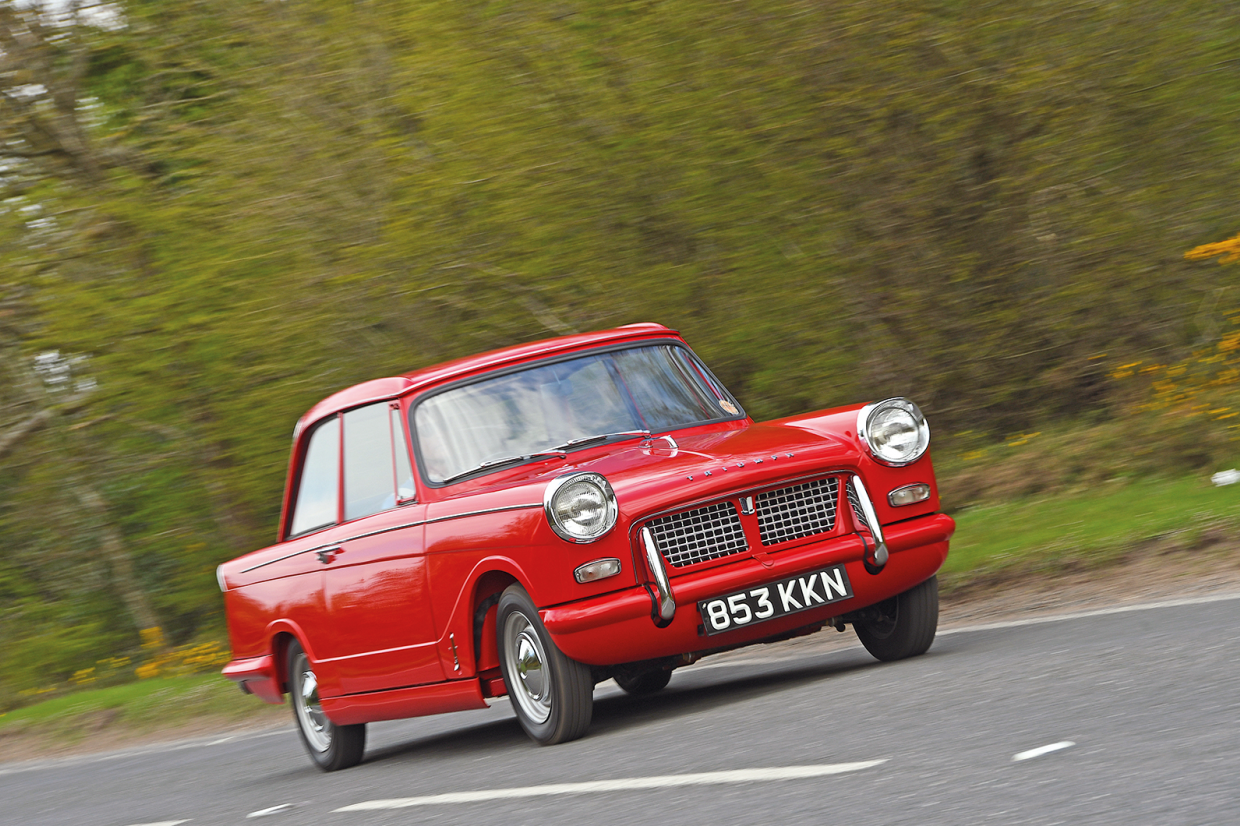 If the Herald and the A40 represented cut-price Italian glamour, the Anglia was a beguiling blend of Hollywood and late-period British rock ’n’ roll.

In September 1959, few motorists would have been surprised at a British Ford employing Dearborn stylistic tropes, but the lines of the 105E created a minor sensation at the Earls Court Motor Show.

Potential customers would be informed how that ‘Breezeway’ rear screen deflected rain and snow in the winter and afforded protection from heat in the summer.

More importantly, it made the 105E one of the most dramatic-looking small cars of its era.

The looks of the 105E were said to be inspired by the Mercury Monterey or a ’55 Farina design for Fiat, but its impact was not entirely dependent on its aesthetics. 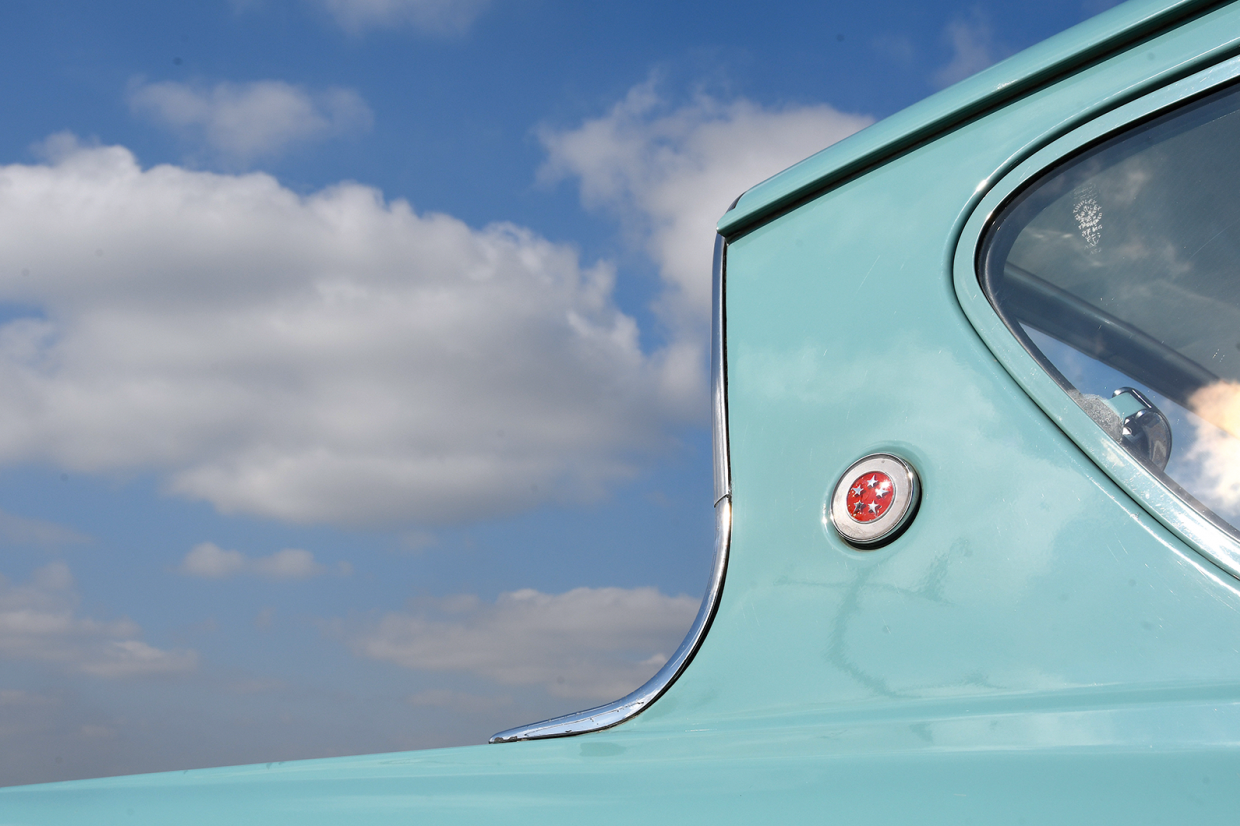 Enthusiasts noted the tuning potential of the oversquare power unit and Sydney Allard scored a class victory in the 1963 Rallye Monte-Carlo in his supercharged Anglia Allardette.

Jason Barnes, owner of this 1966 deluxe, finds the performance to be excellent: “At one point I replaced the standard FoMoCo carb, which was not Ford’s best, with an SU, but it is now back to the standard set-up and that still provides more than enough go.

“The four-speed gearbox was a first on a British Ford, and is a really good, responsive transmission.”

Compared with the A40 and the Herald, the ‘New Anglia’ bore fewer hallmarks of earlier models, down to the electric windscreen wipers – another Ford GB first – and a dashboard with overtones of a jukebox: 60 years ago, the 105E was as on-trend as a portable Dansette record player.

For those drivers who found the 105E just too radical, there was the Prefect 107E – essentially the four-door 100E bodyshell with the 105E’s ohv engine – while the 100E ‘New Popular’ was ideal for anyone who considered tailfins to be an extravagance. 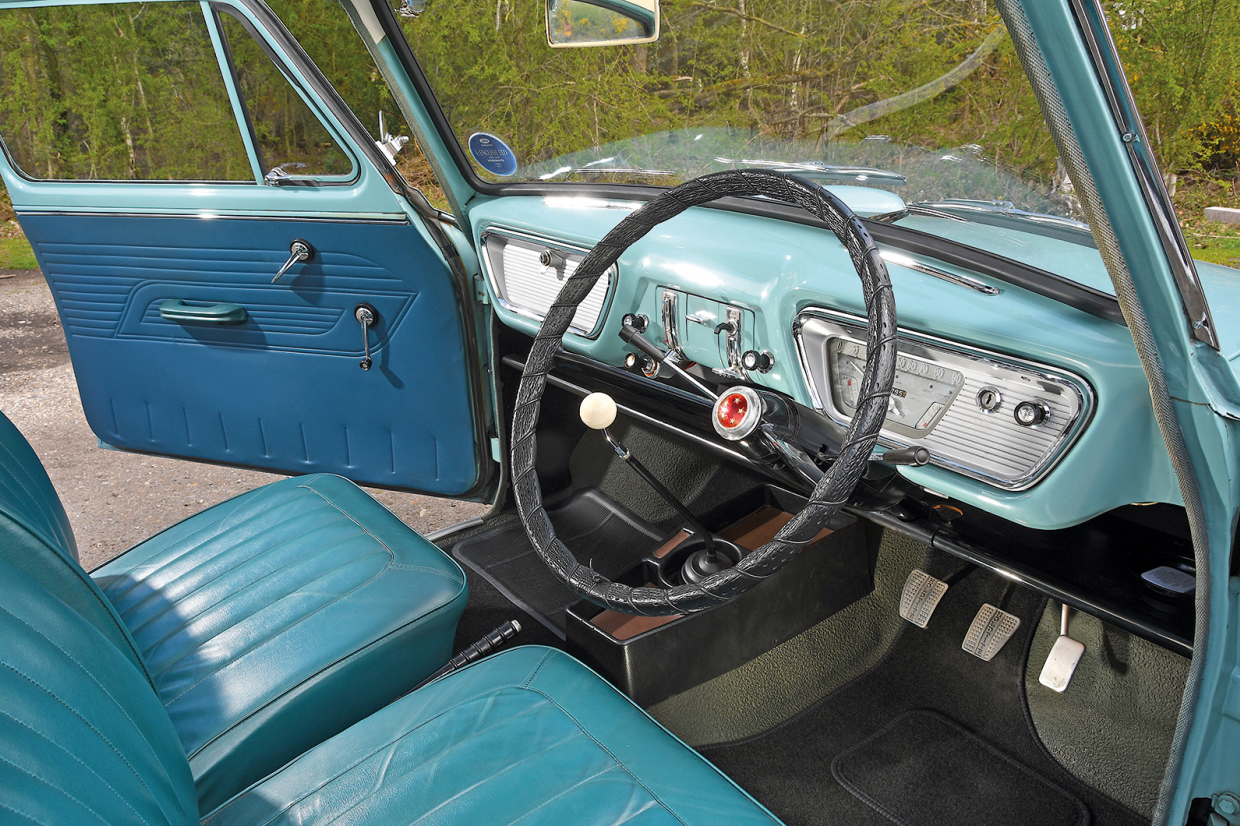 Scaled-down Americana was not always popular in the UK, as proved by the comparatively unsuccessful 1961 Consul Classic, but the Anglia’s proportions are supremely well balanced.

It is also hard to resist a car so determined to convey an ethos of the freeway to outer Croydon that the bonnet lever is marked ‘Hood’.

‘The World’s Most Exciting Small Car’ innately appealed to the chap who affected a Bob Monkhouse-style mid-Atlantic accent, and such a go-ahead sort would naturally specify the chrome-laden deluxe version.

The range was expanded to include van and estate versions in 1961, and the 1.2-litre 123E Super in 1962, before production was transferred from Dagenham to Halewood the following year. The final Anglias were built in late 1967.

“By 1966, you can see that Ford was starting to make economies with the Anglia,” says Barnes, who bought his deluxe 23 years ago from its original owner, an ex-Jaguar employee awarded the 105E as a retirement present.

“The interior was less colourful, and the list of optional extras was less elaborate.” 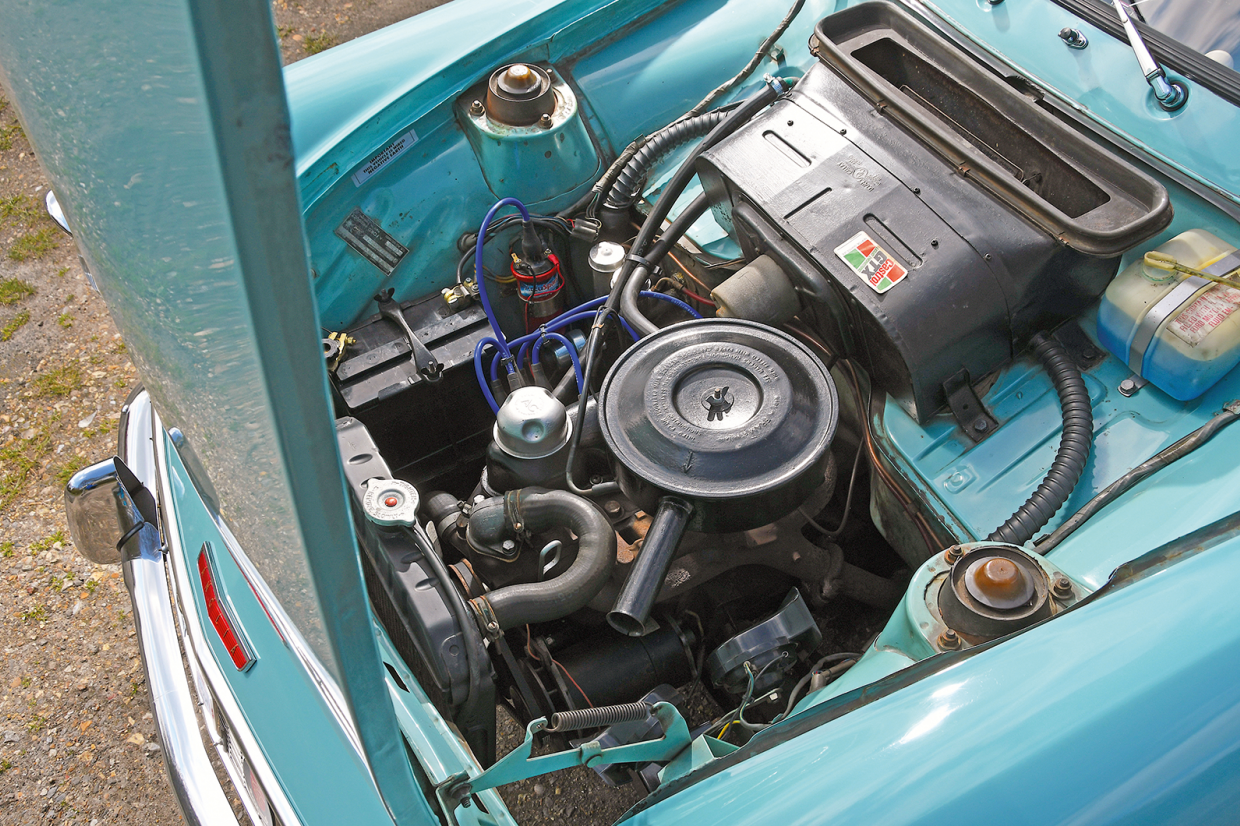 The Anglia’s look was arguably more rooted in time than that of the A40 or Herald.

A profile that captures the zeitgeist has the capacity to date rapidly, and the 105E was rendered passé by the time The Beatles’ Please Please Me LP had hit the nation’s record shops in 1963.

Three years later, the launch of the ‘coke-bottle’ Vauxhall Viva HB made the Anglia appear almost antediluvian, but by that time the Ford had a loyal following.

To experience the Barnes Anglia today is to vicariously enjoy the promotional film First on the road directed by Joseph Losey – a world of glamour, Continental touring and whitewall tyres, all accompanied, naturally, by the finest vibraphone music. 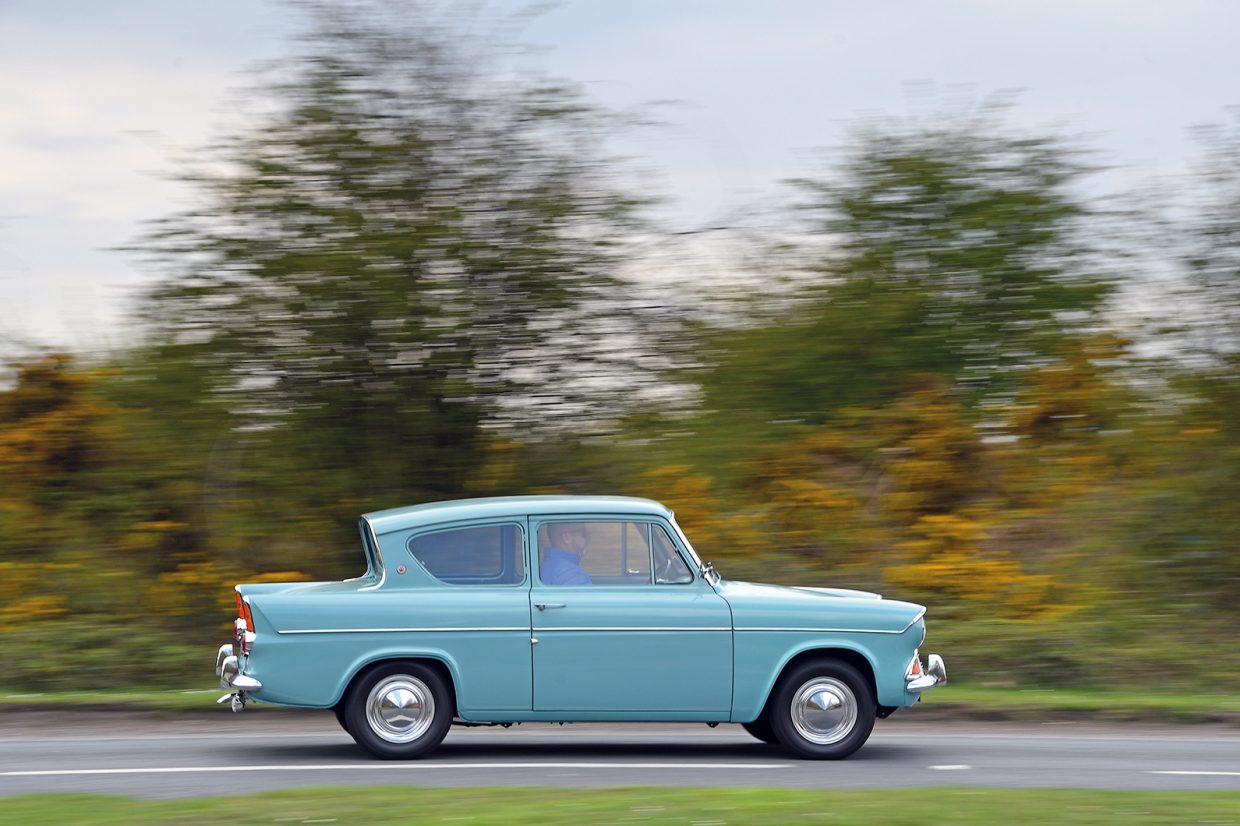 To consider the impact of this trio, just look at any British street scene of 1959-’60.

The sight of an A40 or Herald among black FX3 taxis in a Pathé Newsreel is the harbinger of the automotive future, while the 105E in the grim film noir Never Let Go seems to be from another realm against its west London surroundings.

Pop historian Philip Norman claimed that the late ’50s was “a world utterly without style”, but the Austin, Ford and Triumph anticipated one of the social developments of the coming decade: a sense of chic at an attainable price. 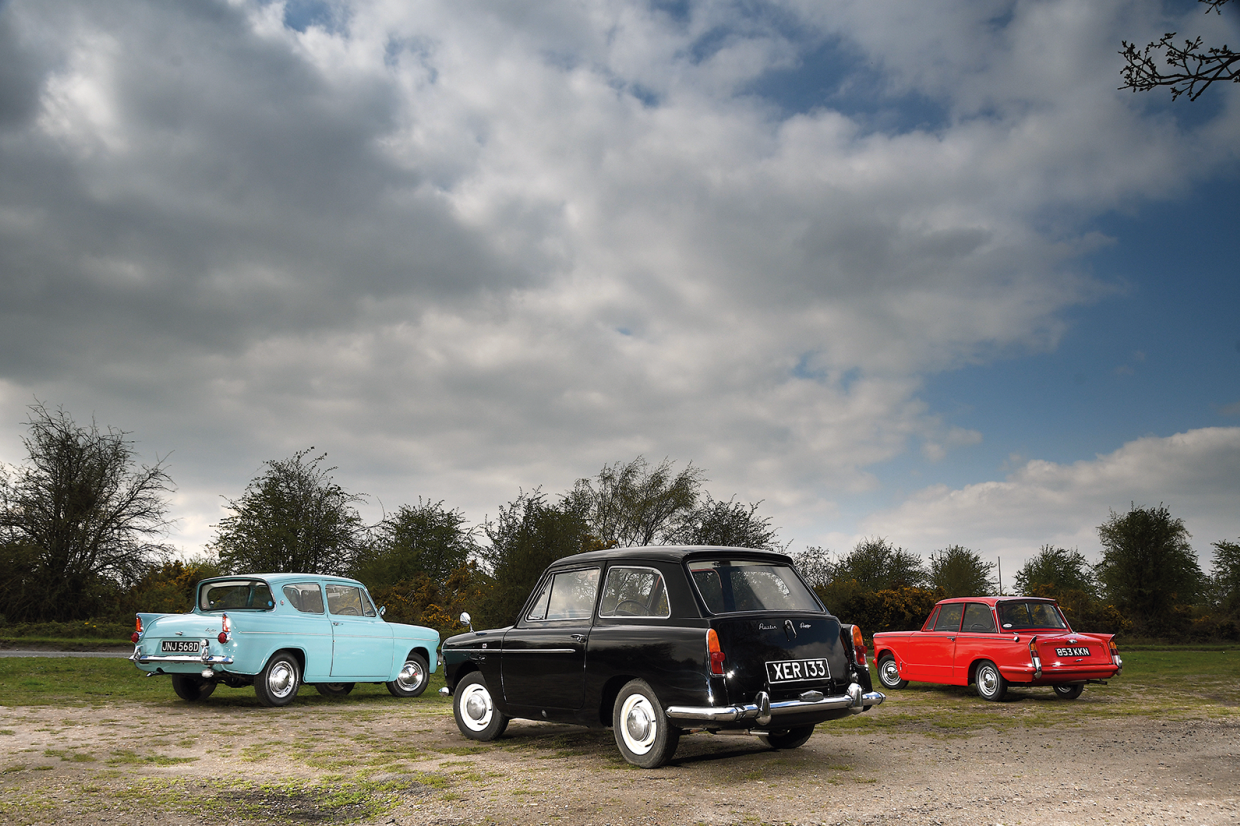 The award-winning Volkswagen Karmann Ghia that punches above its weight