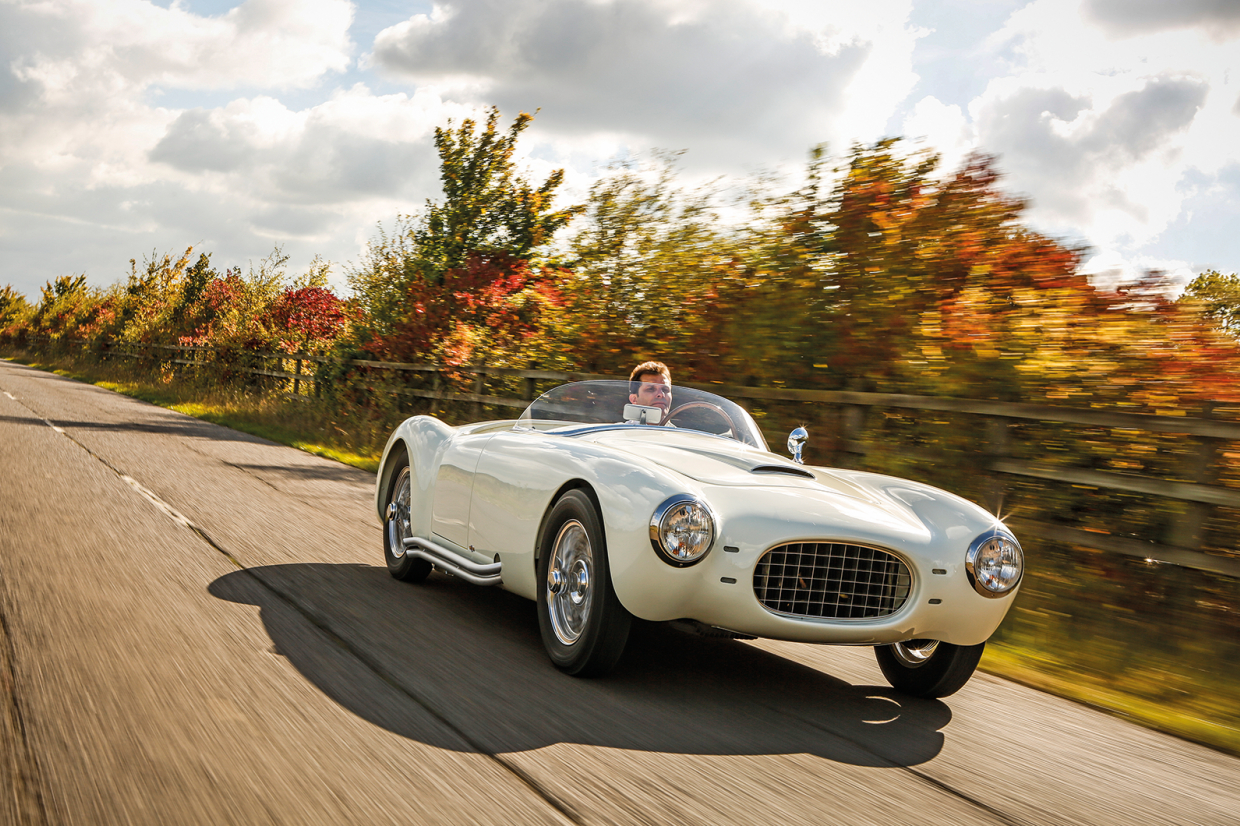 Appearances are deceptive. This lithe, liquiform beauty might just be the perfect sports car, its exquisite shape taking you on a grand tour of the best of Italian coachbuilding.

But only a tiny constructor’s badge gives a hint as to what it might be.

Lancia? There’s a touch of D24 about the front. No. Cisitalia? Almost. From the rear there’s even a light dusting of Porsche 550 Spyder, but it came from Turin.

Viewed alone, there are no clues to its size. It looks tiny, although it’s actually about as big as an MGA, its extreme limbo accentuating the width.

You think you’ve seen it before but that’s master craftsman Motto’s art at work, because this sublime roadster is the only one in the world. 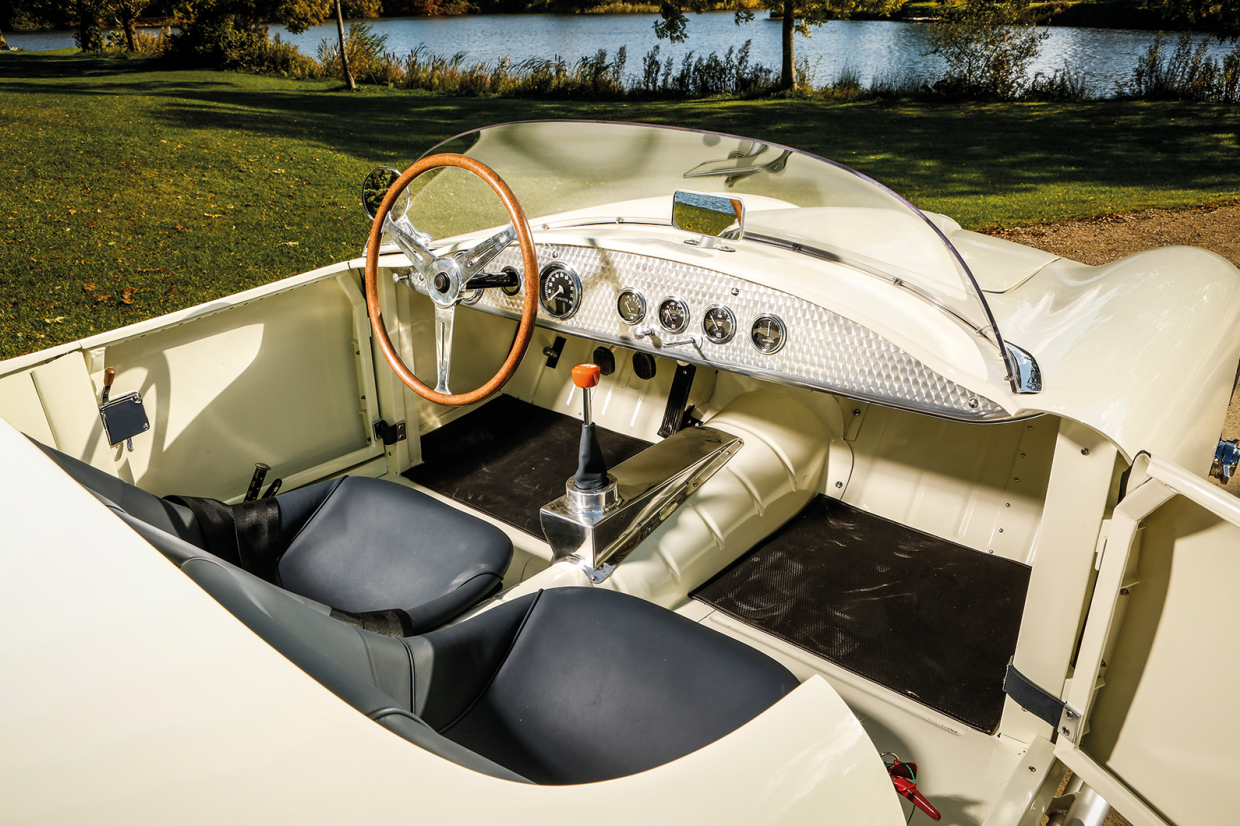 Simple bucket seats and Nardi wood-rim wheel in a sparse cabin, with the gorgeous Sun rev counter straight ahead

And you can join the dots from this delicate beauty back to the MG Midget: not the open-top A35, but the T-series of the 1930s.

Though Abingdon’s sports car had been gratefully received after WW2, pretty soon American racers realised that its square-rigged profile was hampering top speed – even when propelled by Ford V8s – and that better aerodynamics would help.

So one enterprising hotshoe had a sleek all-enveloping body devised by Carrozzeria Motto in Turin.

The first one was built on a TD frame, but that was deemed too heavy and agricultural, even with its independent front end, so a better chassis was commissioned from GilCo – Gilberto Colombo.

Two more cars were made, and bodied the same way. That left a third chassis, which ended up as the car here.

It’s based, in finest etceterini tradition, on Fiat 1100 mechanicals, with Motto coachwork styled by Michelotti.

Its history isn’t quite that simple, though, as its owner, Coldplay member Guy Berryman, has found out during his exhaustive research. 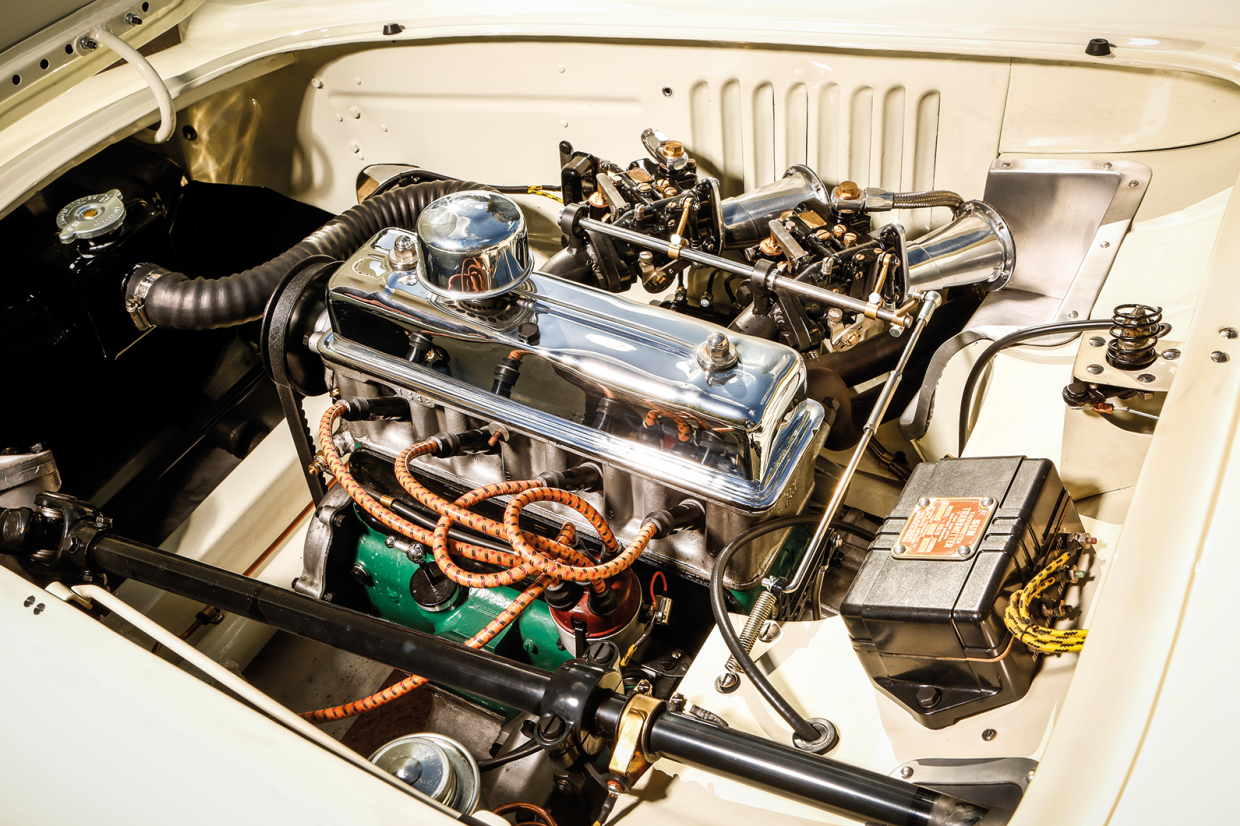 The rorty tuned motor, with a Sun tacho control box on the scuttle

Originally it was slated to have a Fiat 8V ‘Otto Vu’ engine, but the car ended up with a tuned 1100S motor, which made it suitable for Sports Car Club of America (SCCA) Class G racing.

It raced only once, and was then put away for 40 years, not long after appearing at the Henry Ford Museum’s 1956 Sports Cars in Review exhibition – an annual showcase of the world’s latest and most exotic machinery.

Berryman acquired it in 2013, and takes up the story: “In 1953, three special-bodied TDs were built. MG racer Dave Ash was convinced that the mechanical components of the TD could be competitive if given a light and aerodynamic body.

“Carrozzeria Motto in Turin was enlisted to reshell the MGs because it was the known master of creating lightweight aluminium coachwork for sports cars. Two of these TDs were built on a tubular frame designed and produced by GilCo, a specialist in race-car chassis fabrication.

“The Motto-MGs proved to be very successful in SCCA race meetings and caught the attention of Paul Farago when they beat his Siata.” 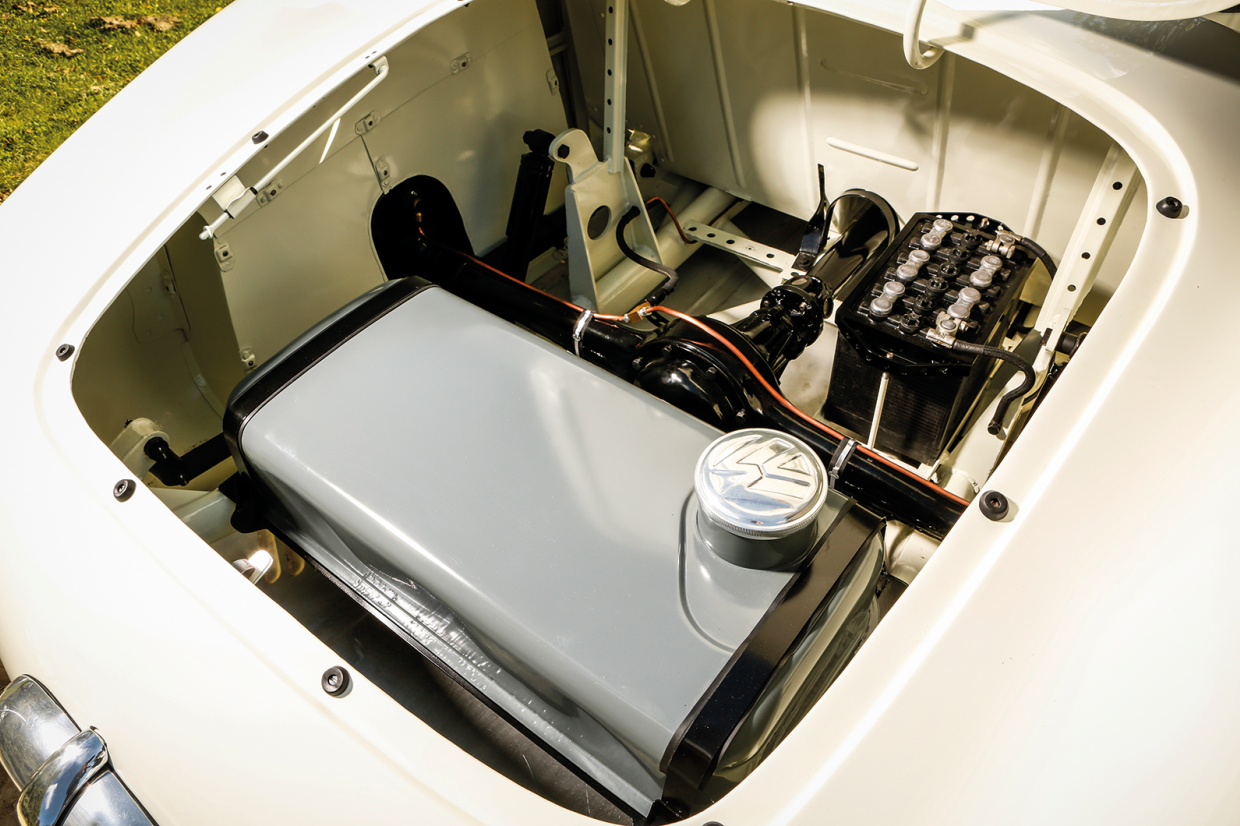 He adds: “Farago was an Italian living in Detroit. He was a mechanic, racer and car builder who later became an engineer for Chrysler.

“Inspired by the Motto-MGs, Farago instructed Carrozzeria Motto to make a similar barchetta on the same GilCo ‘diamond’ frame that was designed for the MGs. It was styled by the prolific Giovanni Michelotti, but by the time that the body and chassis had arrived in the US, Farago’s commitments with Chrysler left him little time to build the specials that he had become well known for.

“So the Motto-bodied project was passed on to fellow SCCA racer Max Goldman, who took charge of assembling the car.”

Berryman has talked to Goldman’s son, also called Max, who says that a tremendous amount of time went into constructing the car in their workshop in Ann Arbor, Michigan.

Starting in mid-1954, it was created over 12 months or so with the help of notable engineers John Camden (GM, Camden Superchargers) and Richard Lyeth (Lyeth Engineering, Hi-Tork Differential).

It was painted India Ivory from Chevrolet’s 1954 colour palette. John Camden recalls that the motor built for the car by Paul Farago was “an 1100 Simca ‘four’ with a modified cylinder head, special Winfield camshaft and dual sidedraught Weber carburettors with tubular intake manifold” and that it was “a hot little number”. 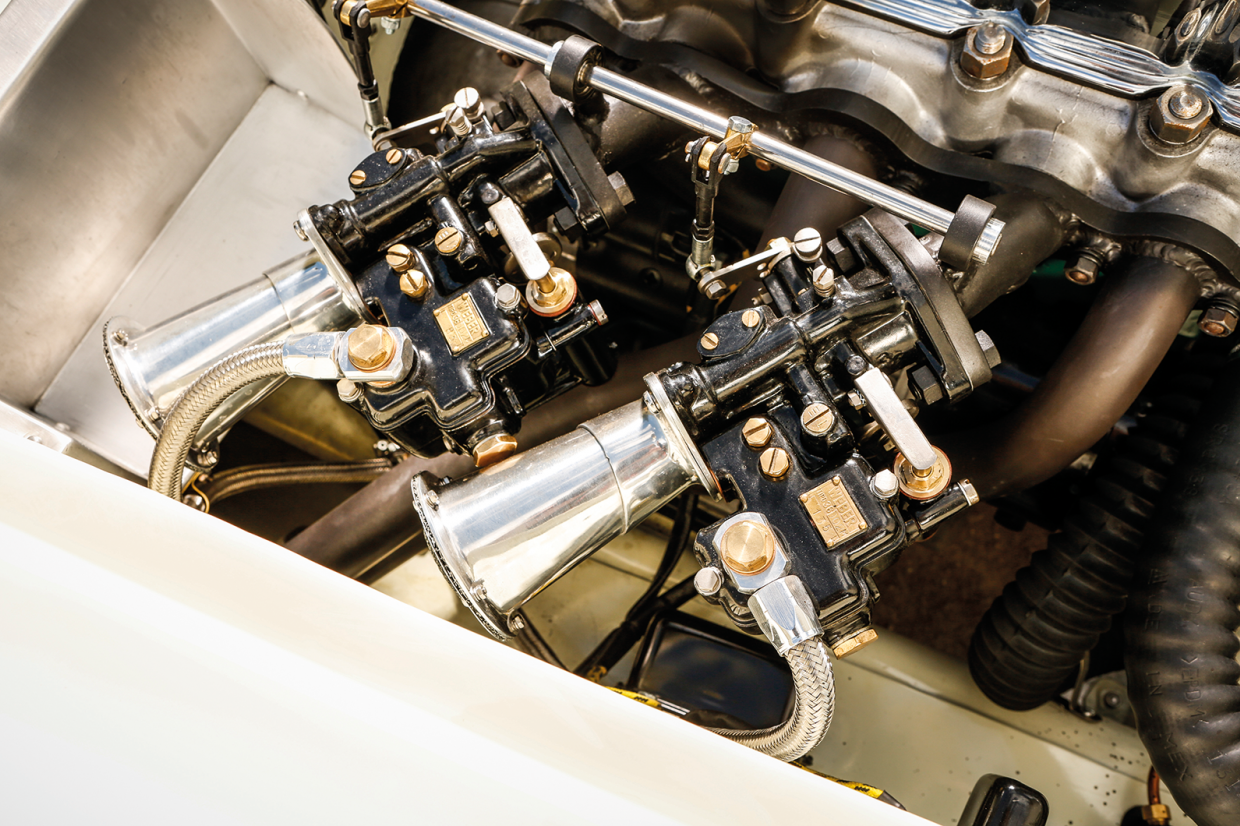 Farago had already proved himself to be an expert with tuned Fiat-based engines that were measured to produce more than 100bhp per litre, which was a remarkable achievement at the time for a normally aspirated motor.

“Farago intended to fit a Fiat 2-litre because he had owned 8V Ghias and the Supersonic,” says Berryman, “but 8V engines were not easy to come by and, by the time the car arrived in the US, he offered Goldman a race-tuned 1100 unit.

“One of the conversations we had when restoring it was whether we should be using an 8V as originally intended. If I’d been earlier I could have had the 8V it was meant to have, but that engine has now gone back into the car it belongs in.”

Goldman was eager to drive his new Motto-bodied spider and entered it for an SCCA race at Watkins Glen in September 1955.

“John Camden remembers helping to set the car up with Max at a private track at Waterford Hill before the meeting,” explains Berryman, “but the Watkins Glen entry is recorded as a ‘Did Not Arrive’ – presumably because the car was not fully race-prepared.” 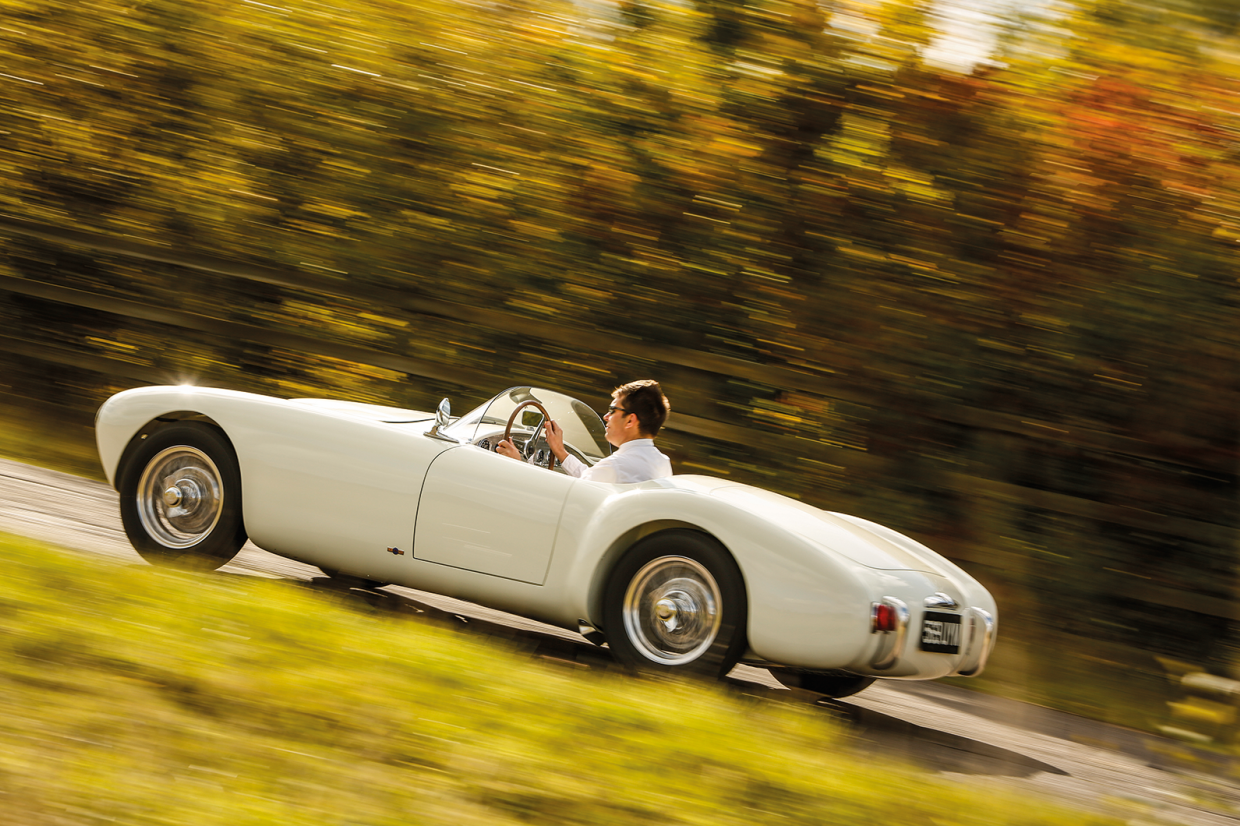 This one-off has a sweet-handling chassis

Towards the end of 1955, Goldman agreed with Frank Davis, the Curator of Mechanical Arts at the Henry Ford Museum, that the spider would be displayed in the museum’s 1956 Sports Cars in Review exhibition.

On 13 January, it appeared for three weeks alongside a Mercer Raceabout, Jaguar D-type, Mercedes-Benz Gullwing, Lancia B24 Spider, Ferrari 250 Europa and the sensational Ferrari 250GT Berlinetta Speciale: “Max showed a certain sense of humour by naming his Motto spider the Goldmanini, perhaps hoping to convince the general public that the car was an entirely Italian creation.”

By the summer of 1956, Goldman had decided to sell the barchetta, because he had purchased the John Bentley ex-Sebring Abarth Boano 207A 1100 Spider, which was likely to have been more of a front-runner.

His Goldmanini was bought by John Camden’s old school friend and Pontiac employee, Dan Hosler, who had seen it in the Sports Cars in Review show.

He drove the spider to Flint for a time-trials session and once to Owosso Speedway for a race that was to be its first and last competitive event.

Writer and historian Karl Ludvigsen visited the car at about this time. He was spending that summer working for GM in Detroit and took an interest in any auto activities going on around town.

He took a series of photos showing the car’s construction, and these helped massively to get the details exactly right during restoration. 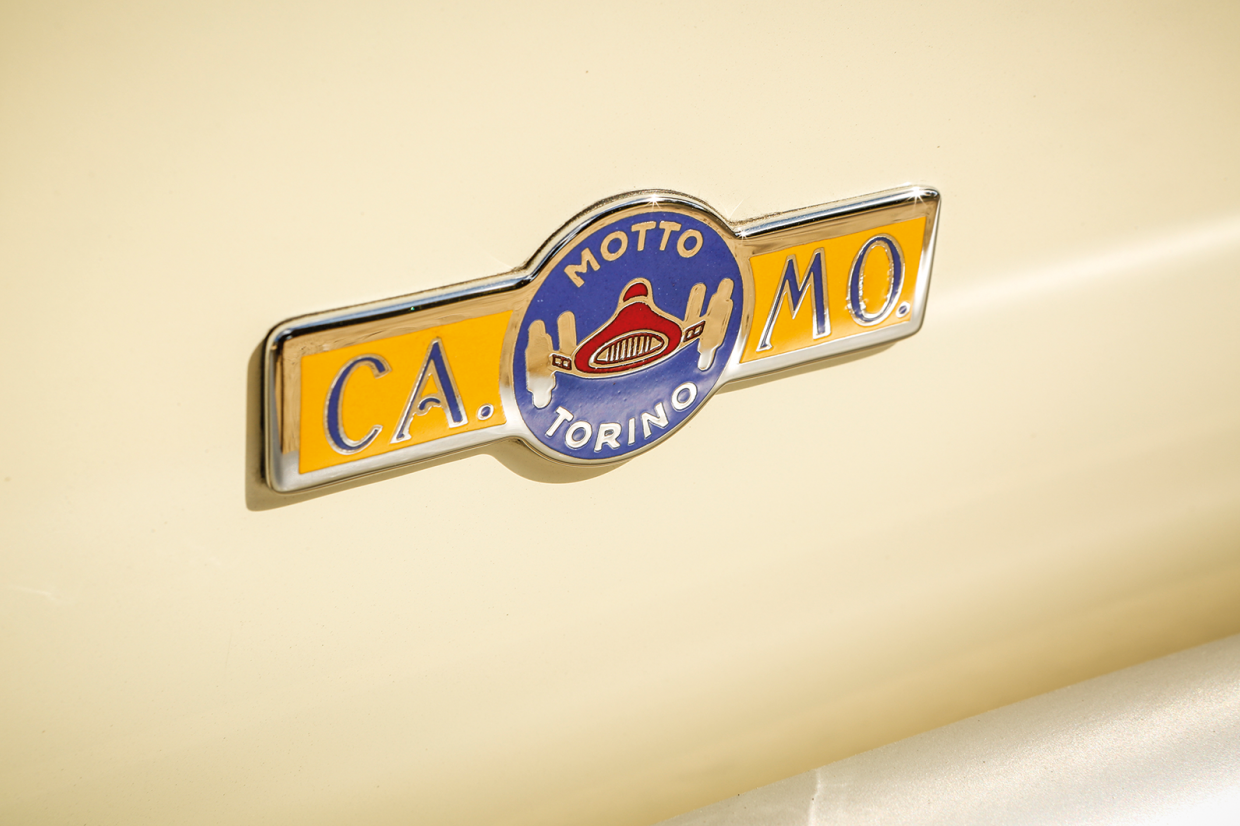 After the Goldmanini had languished in Dan Hosler’s garage for almost 10 years, in mid-’65 he advertised it for sale in Road & Track magazine.

It was bought by a man from Ohio and taken away on a trailer, but was never paid for so Hosler had to go and retrieve it.

He continued to correspond with potential buyers, retaining copies that have provided a valuable source of the spider’s history, and it was eventually purchased by Peter Zobian in 1973.

Zobian paid $450 for the car and trailered it, part-disassembled, to his home in Ann Arbor – where it stayed until it was bought by Berryman.

As Berryman recalls: “I’d been talking to Peter about another car and he sent an old picture of it on his driveway – and behind that I saw this very interesting barchetta and thought: ‘What’s that?’ He replied: ‘That’s my Motto-bodied spider. I’ve had it 40 years and I’m going to be buried in it.’ And then, later, I got the call…”

Berryman snapped it up. He’s passionate about his cars and is a proper petrolhead, having started playing with his dad’s MGB at home in Kirkcaldy as a lad, but admits that he only has “chunks” of time to devote to his classics, the day job taking him away for long periods.

Thornley Kelham became involved when founders Simon Thornley and Wayne Kelham stumbled across the Goldmanini in storage and Kelham “fell in love with it”.

“We didn’t have the time to do it here [at his Gloucestershire home, where he maintains an impressive workshop],” says Berryman, “and we wanted to get things moving. Because Wayne had been so enthusiastic, we sent it to them.” 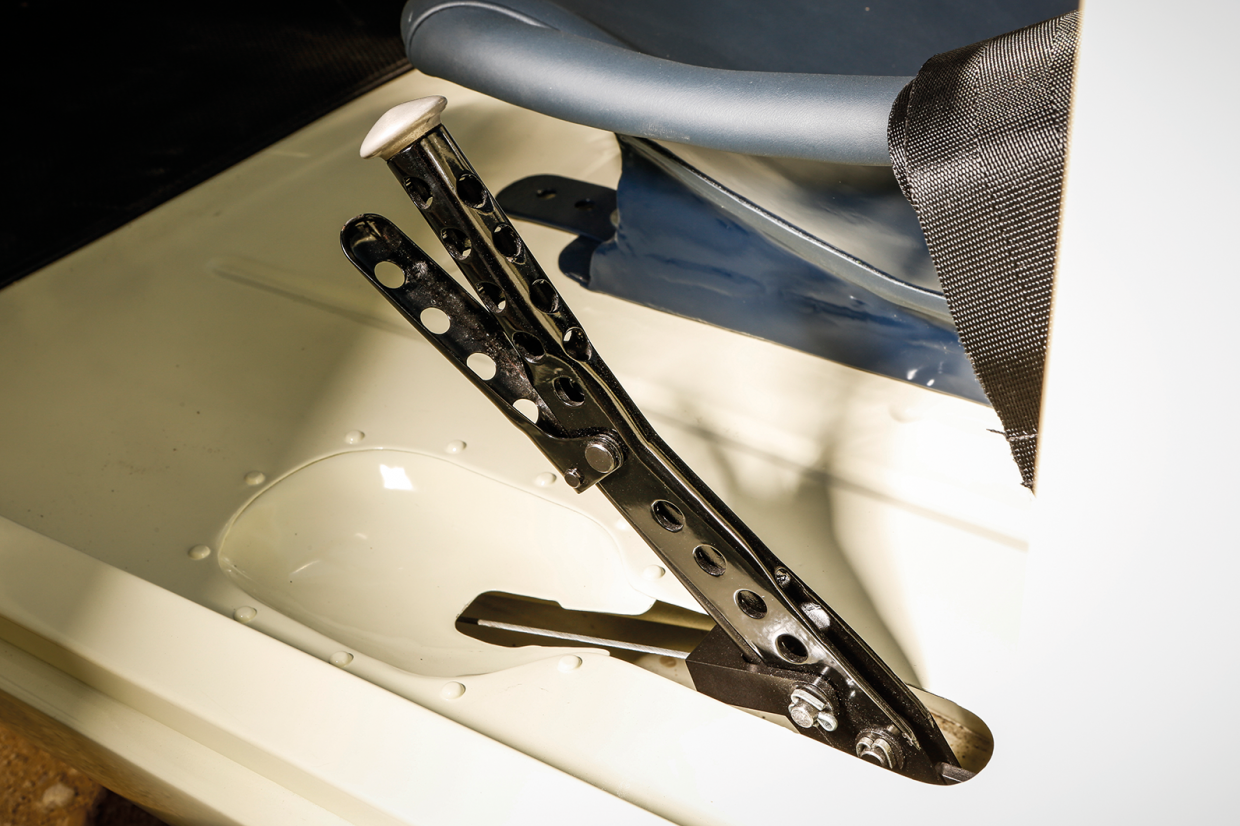 The period-style handbrake was crafted by restorer Thornley Kelham

The shell was in pretty good shape, as Berryman points out: “It had covered only about 60 miles, so the body was just about perfect.”

But it never had a handbrake, which the TK men had to engineer: “By that time, I’d already spent two years researching the car, getting pictures from Max Goldman’s son, so, when we came to rebuild it, we knew every detail.

With the original front bumpers left off for now, there’s a hint of D24 about the nose, but the spider is similar in shape to other Motto-built cars of the period, such as the Siata 208S. It’s clearly related to – though much more shapely than – the slabby Motto MGs.

Says Berryman: “Goldman had the front over-riders fitted upon completion, but he must have removed them for the car’s display at Sports Cars in Review. I felt for its appearance at Salon Privé that it would be nice to follow suit. The original Motto-crafted over-riders are still present and I may decide to refit them at some point.”

Under that beautiful skin is Fiat 1100 front suspension that looks like a Morris Minor set-up executed by elegant Italians, and a simple leaf-sprung rear.

But this car is so low that it’s easier to look over or around the Perspex ’screen rather than through it. 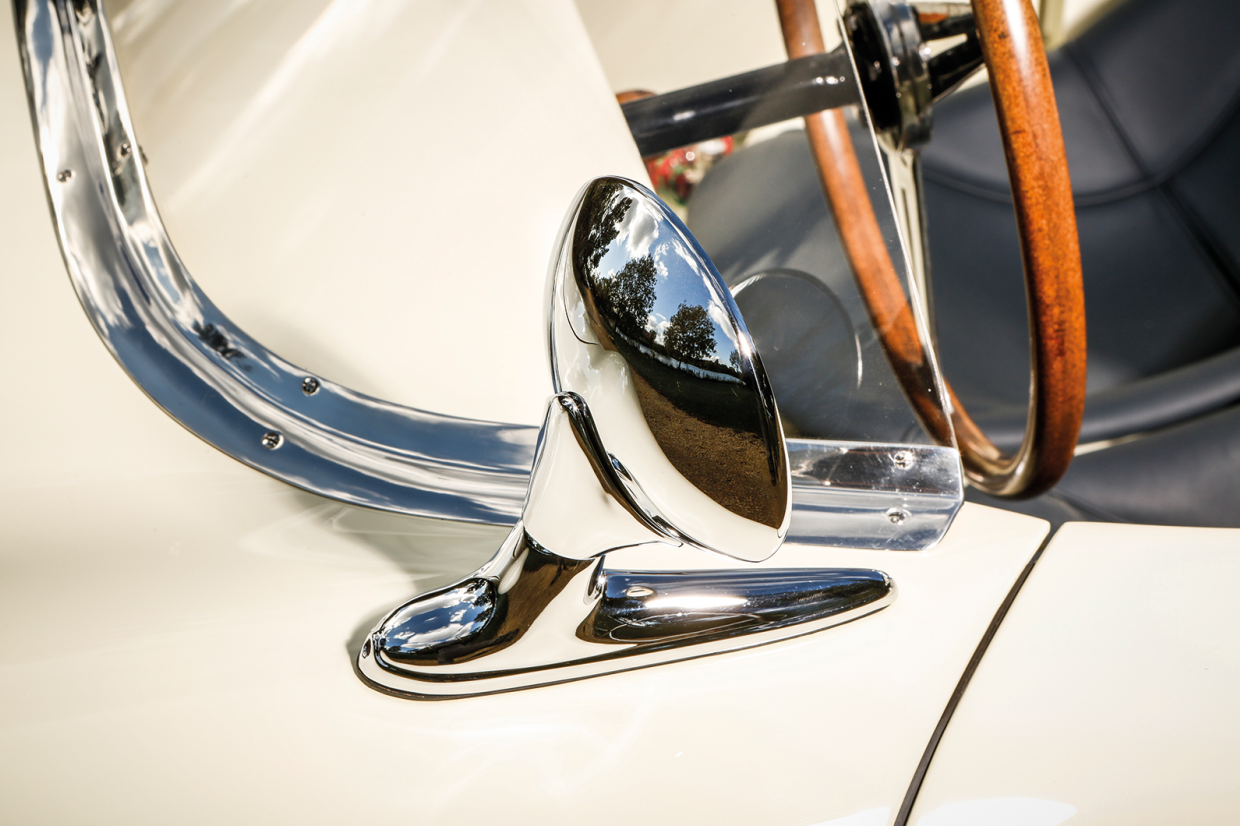 There are stainless-steel scoops under the back of the sills, though it’s unclear whether they’re intended for brake cooling or wheel spray deflection.

Being basically Fiat 1100, it is remarkably untemperamental to drive. There’s no ignition switch so you just turn on the power via the battery cut-off in front of the passenger seat, then prod the starter button.

The chassis is superbly balanced and the steering a little stiff, but when we drove the car it was fresh from the concours with hardly any miles on it.

The brakes are firm and powerful, too, the vented Fiat drums being perfectly adequate for the flyweight they have to arrest.

None of the gauges work, except for oil pressure (and if you’re going to have only one…), but they will, including that fabulous Sun tacho. 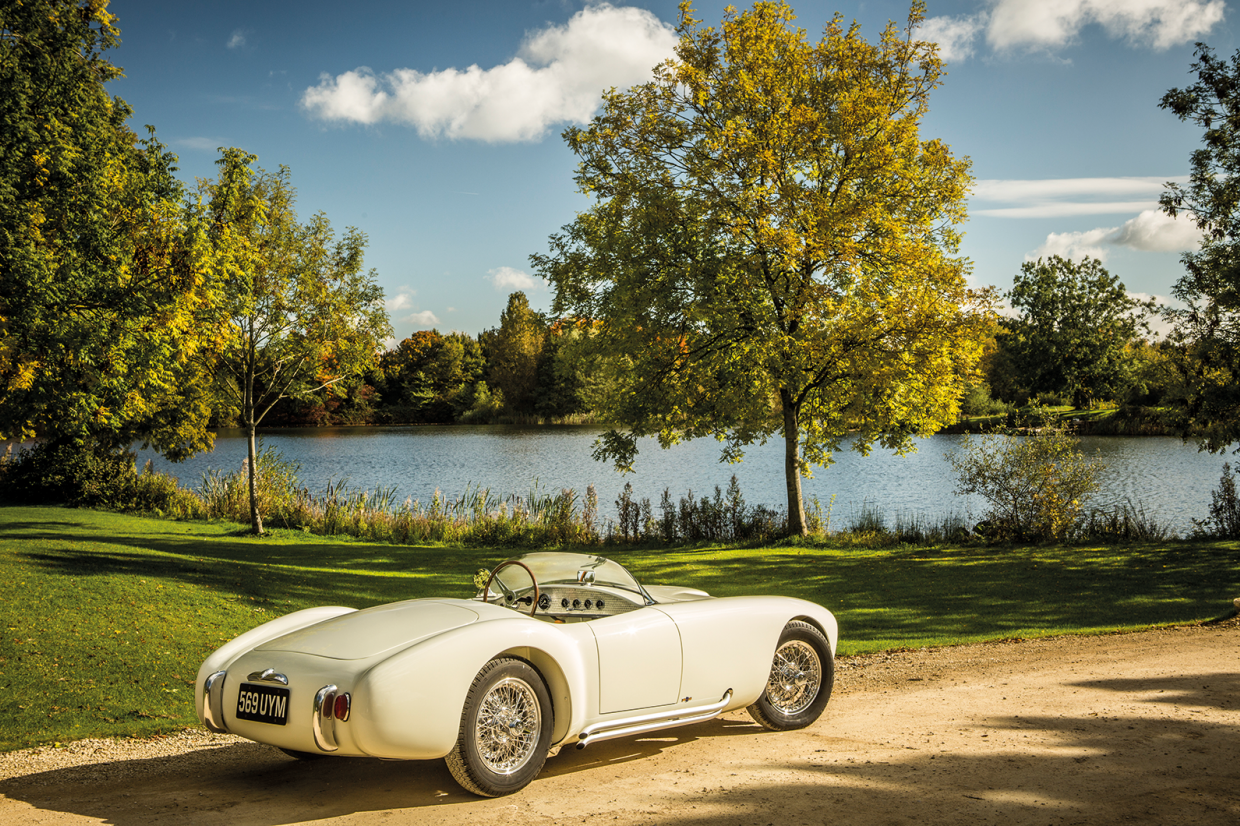 There isn’t a line wrong on this perfectly proportioned roadster

The tuned Simca (née Fiat) 1100S motor is, however, incredibly raucous – think Mini Cooper sans even an exhaust manifold – thanks to the tips of the twin sidepipes being only 6ft from the exhaust valves, with nothing but nature in between. Still, Mercedes 300SLRs are the same and we forgive them.

A solution may be devised, but for now those and the very short gearing keep trips short. A taller diff has been found, and that should make actually going places in it a more relaxing proposition.

And, though it landed the award for Most Sensitive Restoration at Salon Privé 2015, driving it is the plan.

Berryman fancies taking the car touring in Italy – where it came from, after all: “It would be nice for Franco, Rocco Motto’s son, to see it.”