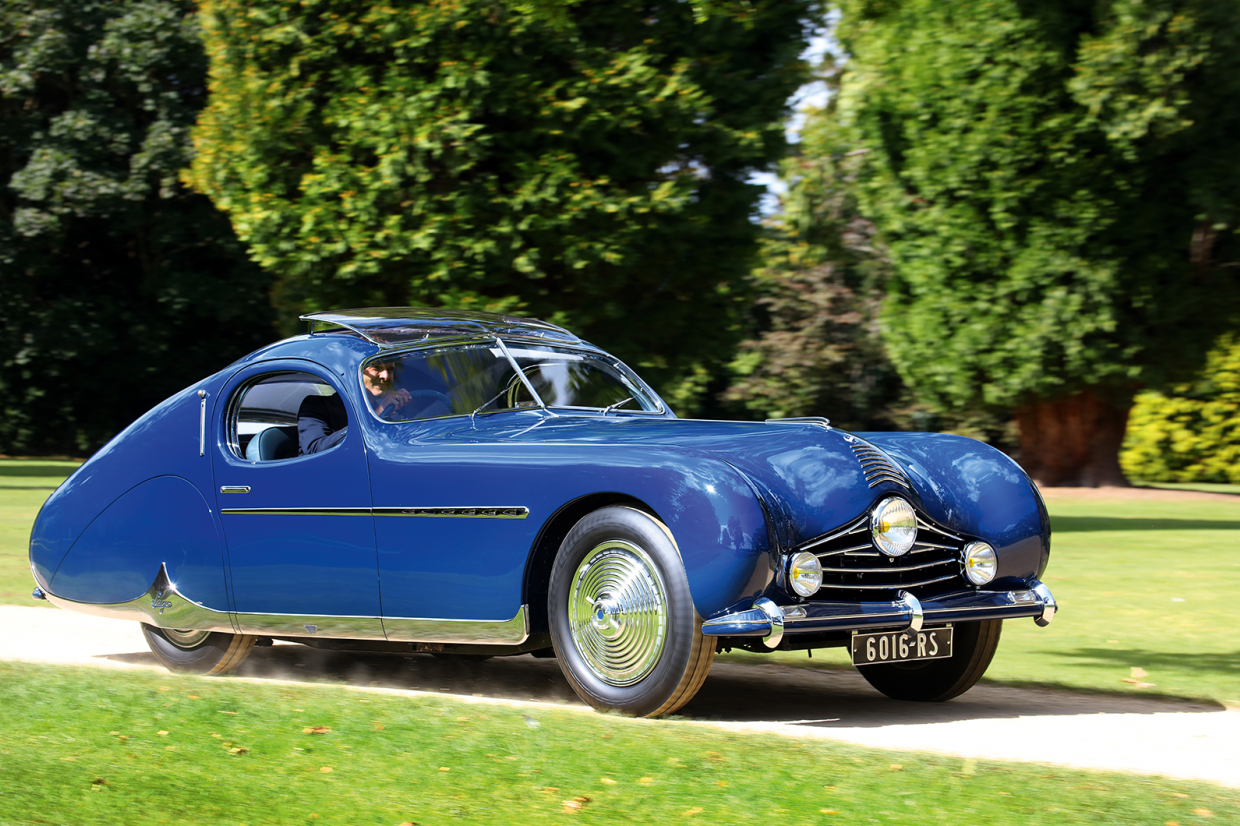 After the Second World War, Talbot-Lago was one of the first manufacturers to launch a range of exclusive, high-performance cars with its spectacular T26 Grand Sport.

These 4.5-litre straight-six-powered exotics were the ultimate high-performance Grand Routiers, good enough for a Grand Prix team and to win Le Mans.

Although the engine now had revised Riley-style twin high camshafts and the brakes were improved with hydraulic operation, the cars were very much updated pre-war designs.

Just one Grand Sport was created by Figoni et Falaschi, the preferred coachbuilder of successful zip-fastener manufacturer Monsieur Fayolle – and this is it. 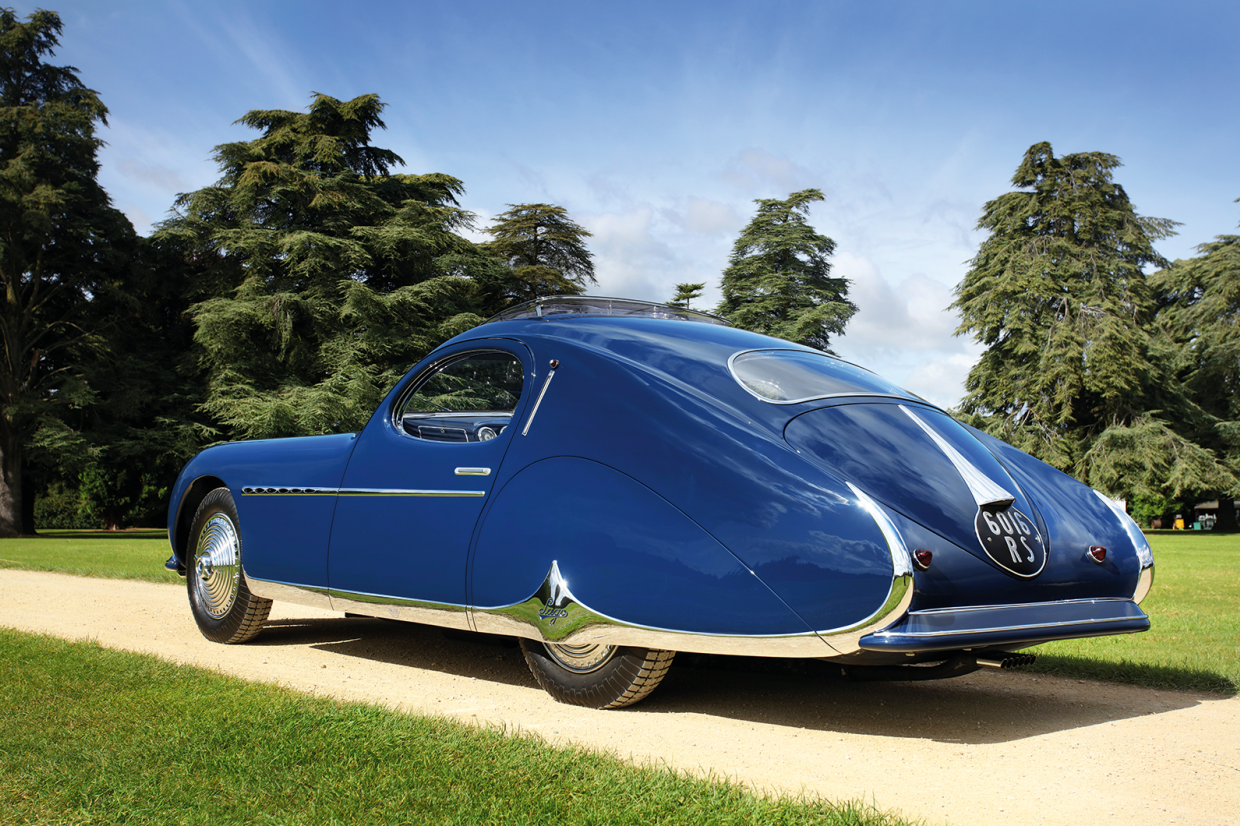 Italian-born founders Giuseppe Figoni and Ovidio Falaschi were renowned for some of the most flamboyant bespoke bodywork in the 1930s, particularly with Delahaye.

Figoni continued to model designs in clay in his office after WW2 before his bodybuilders created the full-size version.

Some claimed his heyday had passed, but winning the Grand Prix d’Élégance et de Confort at the 1949 Paris Salon with this Grand Sport coupé confirmed his status.

How involved the wealthy Fayolle was with the styling of his bespoke Grand Sport isn’t recorded, but Figoni had a reputation for stubborn direction.

Who came up with the chrome zipper motif over the front to celebrate Fayolle’s business isn’t known, either, but the rest of the styling has the bold signature of Figoni, including the goutte d’eau (teardrop) window shape. 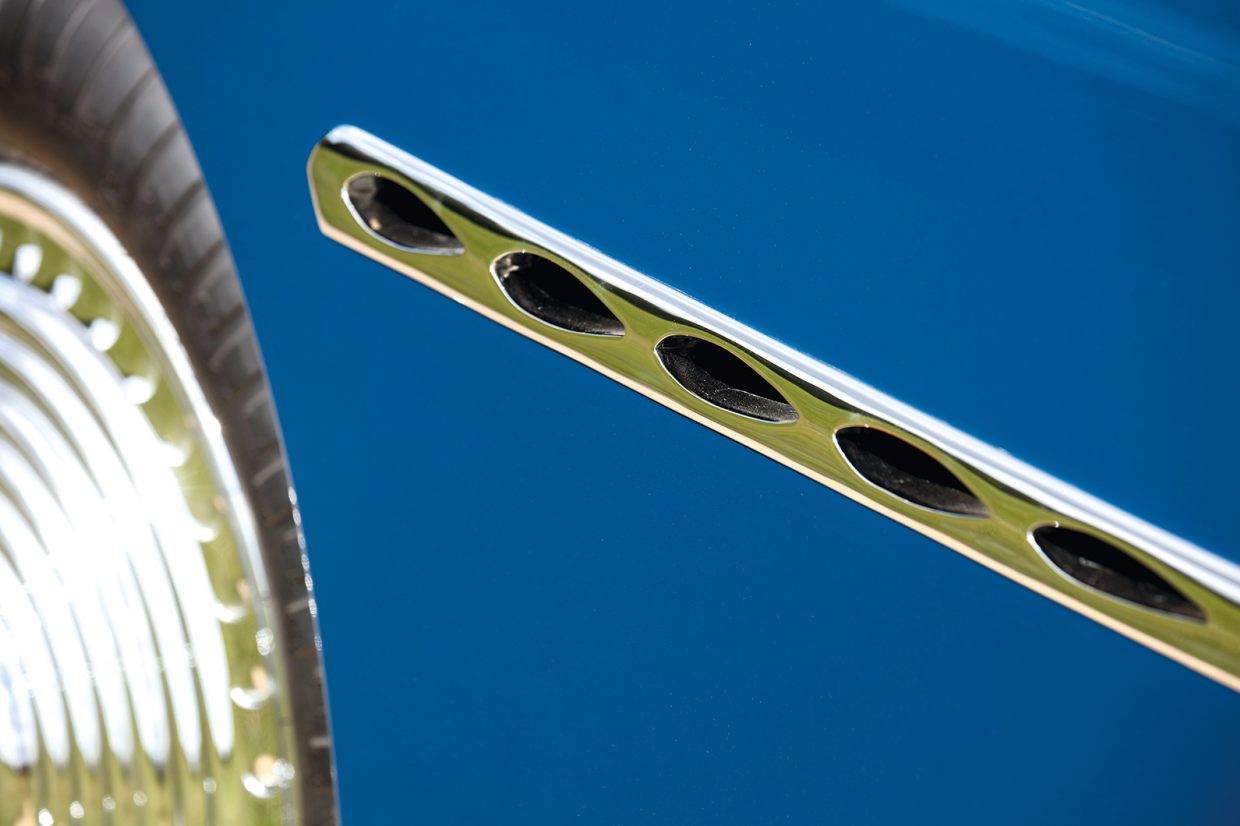 Like many traditional coachbuilders, Figoni struggled with the pontoon body trend and he couldn’t resist embellishing it with bold details, such as the chrome sill feature that wrapped around the rear wing to enhance the fastback line.

The front, with its cyclops headlamp matched with two spotlights in the droopy-shaped grille, had an aquatic look that French magazines tagged squale (shark). Figoni continued this nose style with various custom Simcas.

The Grand Sport was delivered to Fayolle on 8 October 1948, joining a Figoni-bodied Talbot Record in his garage.

Mysteriously for such a stunning design, the new Grand Sport wasn’t shown at any concours events, which were all the fashion in France. 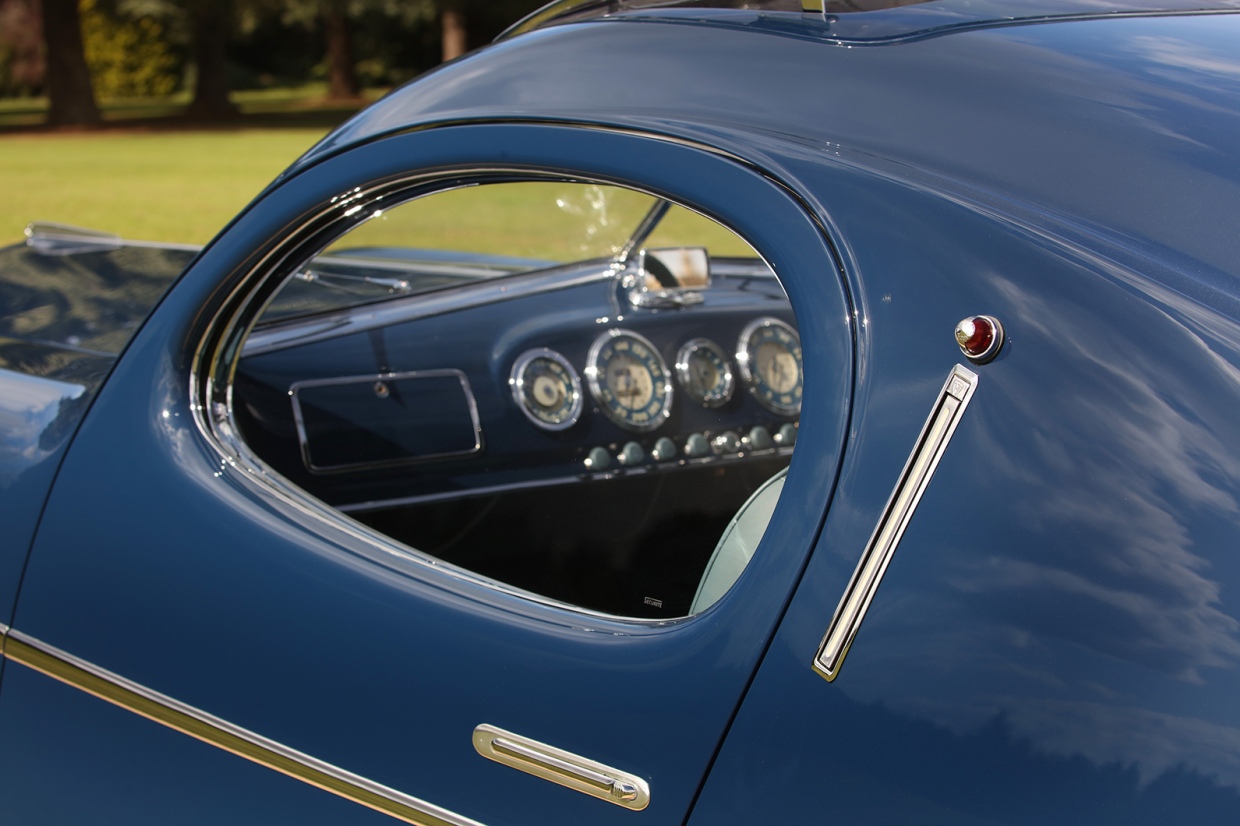 Within a year it seems Fayolle was tired of the car, possibly due to overheating – or alternatively his business interests had taken a dive and he’d failed to pay the bills.

The coupé was returned to Figoni, who displayed it at the 1949 Paris Salon where it created a sensation together with the sublime Delahaye 175 Convertible.

Talbot historian Peter M Larsen has found no details of the Figoni Grand Sport’s life in France during the ’50s before it turned up in California, possibly after import by Roger Barlow, who was the foreign-car specialist at International Motors Inc, based on Sunset Boulevard in Hollywood.

The Grand Sport’s survival is undoubtedly down to Lindley Locke, a lab technician at UCLA who spoke fluent French and had a passion for Gallic coachbuilt cars.

Through the 1950s and ’60s, Locke combed classifieds, visited used-car dealers, and searched junkyards to save unloved Talbots.

Often bought for bargain prices and in poor shape, they were stored away in lock-ups around Los Angeles. Here these legendary coachbuilt beauties remained until Locke’s death in 2001, when his widow Betty started clearing out his little-known hoard. 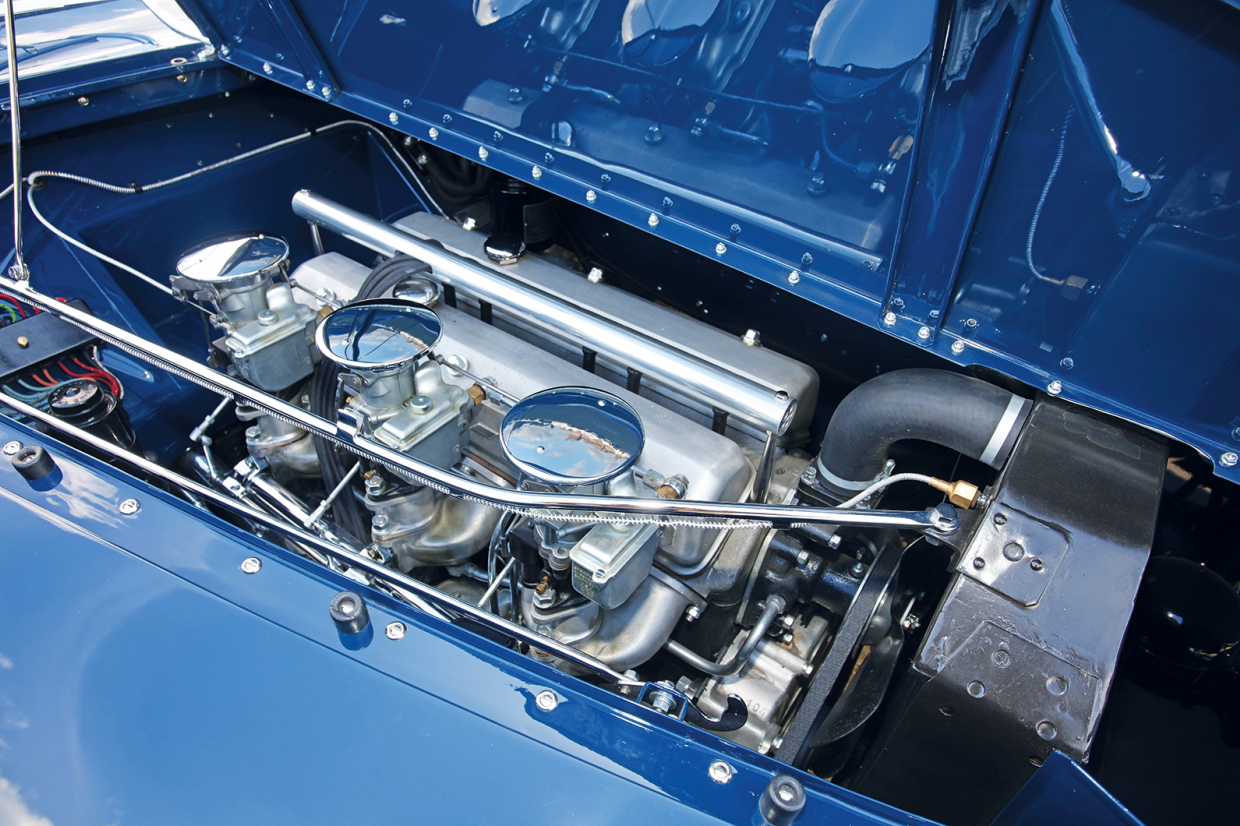 In the Czech Republic, František Kudela and his son Robert had long dreamed of restoring a Grand Sport Talbot. Their lifelong automotive passion goes back to Kudela senior’s first car, a pre-war two-cylinder 998cc Aero that he still owns.

“My father has been collecting for more than 50 years,” Robert explains. “Along with the Mercedes-Benz 500K, he’d always loved the styling of the Grand Sports.

“When he retired from the family business, we set up a workshop next to the factory for his car hobby and we then started looking for a Talbot-Lago project.”

When the sale of the Baillon collection was announced in 2010, the barn discovery of the sensational Saoutchik-bodied Grand Sport, chassis 110109, gave them hope.

“These short-chassis cars are super-rare, only 29 were built,” recalls Robert. “We had to go to Rétromobile to bid on the car but it all turned into a nightmare.

“The car was in terrible condition and the bidding went crazy. The price went high beyond our limits and it eventually sold to Slovakia for a mad price. I thought our dream was gone.” 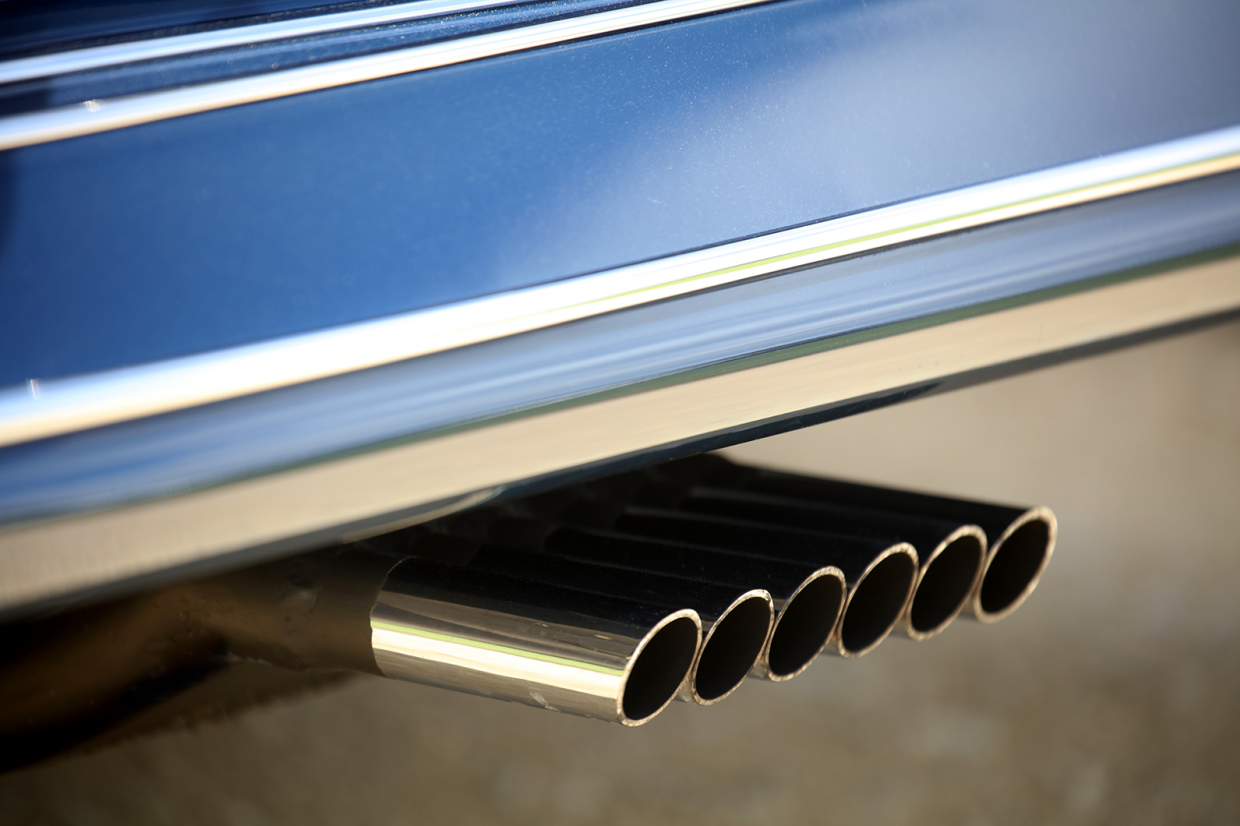 The following day, the Kudelas acquired a copy of an expensive new book on the Talbot-Lago Grand Sport.

“As I was paying, a bald-headed chap tapped me on the shoulder and thanked me for buying a copy. It was the author, Peter Larsen. We exchanged emails and a few weeks later I made contact asking if there were any other Grand Sports available. Peter said he would investigate for us.”

To Kudela’s excitement, Larsen discovered that a trio of little-seen Grand Sports could be available in California. The cars had been saved in the 1960s by Locke.

Most of his collection had been sold, but the three Grand Sports remained with his widow. One was the unique Figoni-bodied coupé, chassis 110103, which had been crashed in the early ’60s by a mechanic while on test in the Pasadena area of north-east Los Angeles.

The distinctive front had been badly crunched on impact with a street light. The then-owner, Ron Alkbee, had lost interest in the Talbot and Locke had acquired the wreck for a giveaway price.

Few saw the Talbot for the following five decades until the Kudelas jetted out to secure a deal for two Grand Sports – and with the Figoni coupé back at the workshop in Chropyně, the analysis and dismantling began. 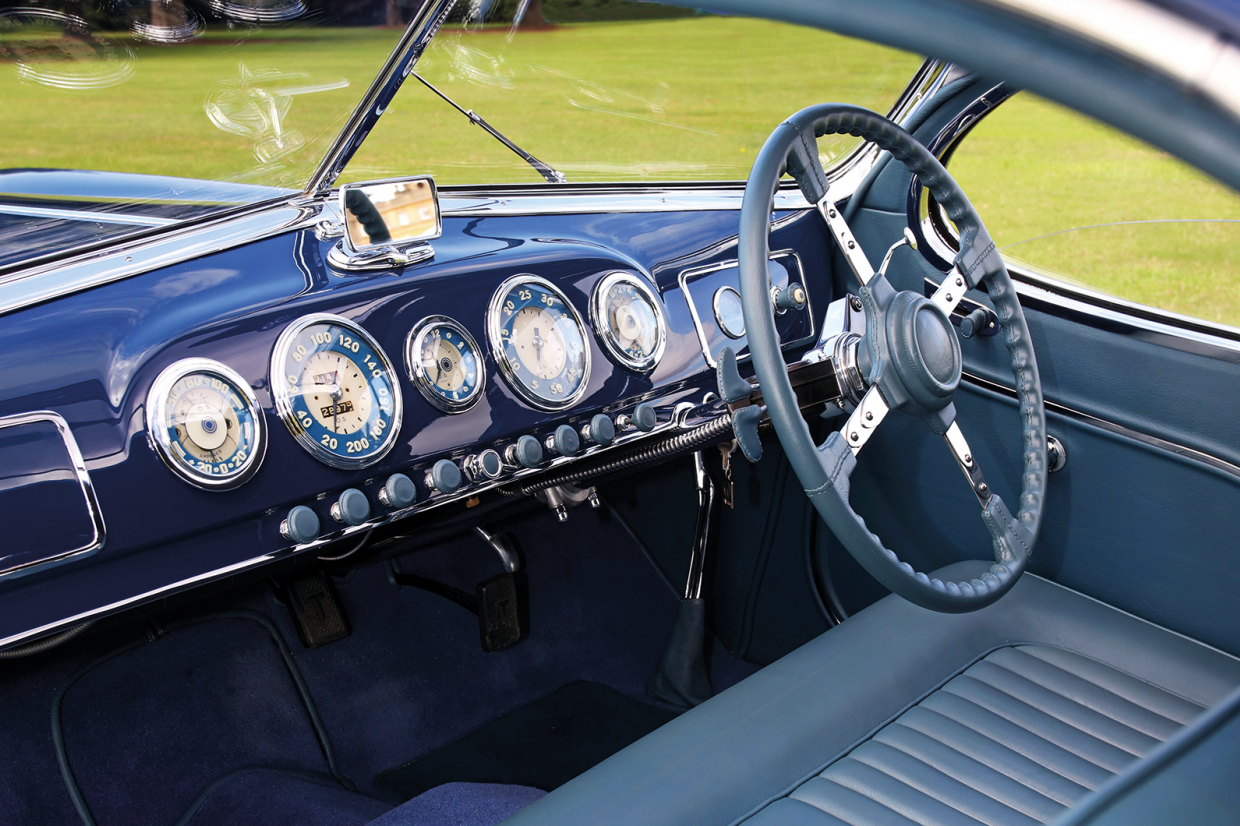 “We were lucky the early restoration had barely been started,” says Kudela. “The car arrived mostly in boxes after the previous specialist had decided the project was too much for him. In some ways it was a blessing the damage was at the front, otherwise it would have been repaired and not stored away all those years.”

The first stage was to remove the body to check the chassis was straight, and a special buck was made for support.

“The original wood was in good condition and we used 90% in the rebuild,” says Kudela. “The standard of Figoni’s craftsmen impressed us. Unlike Italian coachbuilders, the French used an English Wheel, rolling the aluminium rather than hammering out the panel shapes.”

The interior was totally original. Although the leather trim had been affected by the California sun, the Czech team soon found the original colour in areas that had been hidden in shadow and under upholstery edges.

The distinctive instruments, switchgear and steering wheel were all renovated and refitted.

Most of the brass body trim features, including the sill and side flash, had survived, but the damaged front from the accident proved a challenge: “We found some original grille parts in boxes but the rest had to be remade in our workshops. Historians Peter [Larsen] and Ben Erickson were really helpful with photographs to scale up the details.” 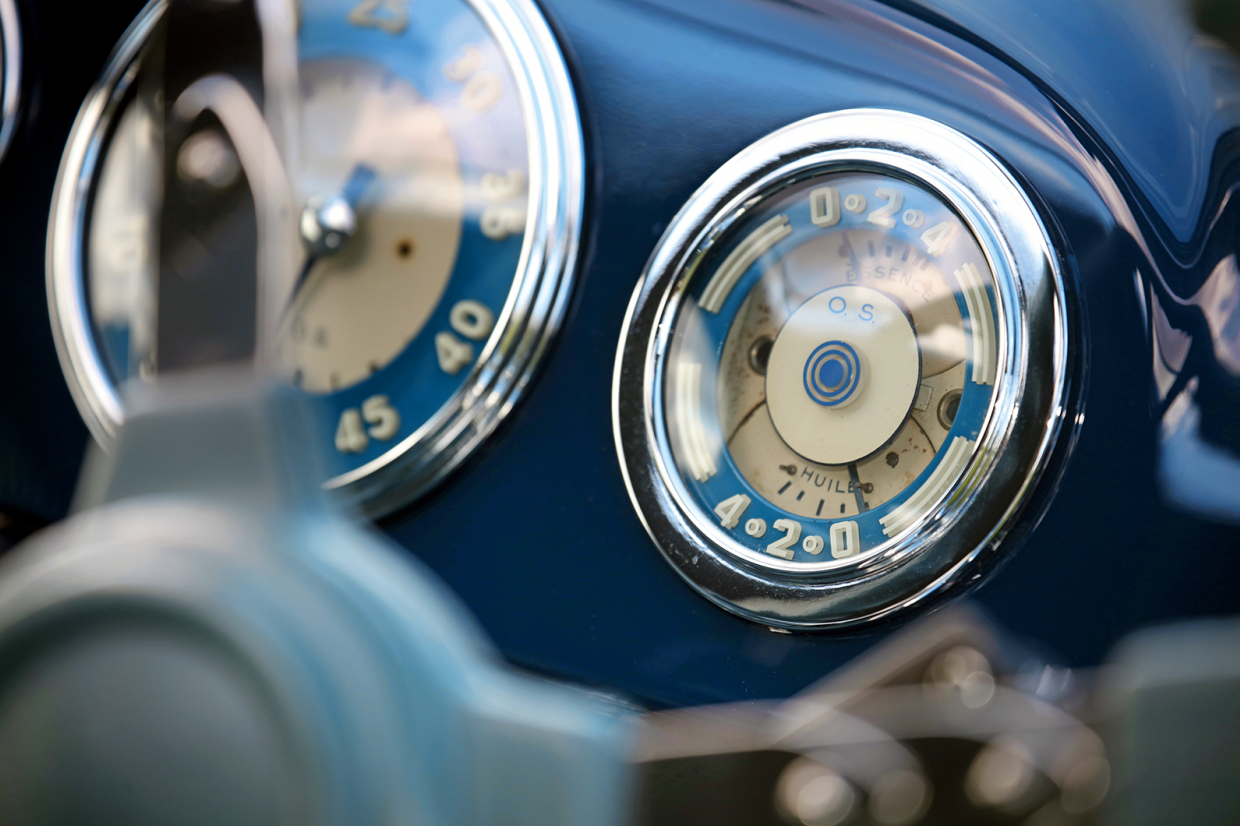 Once the Kudelas were happy with the design and fit, the parts were sent to England for chroming by Genius of the Lamp in Birmingham.

The loom was original but too fragile to use; it proved the perfect reference to match the original style.

Only after a successful pre-assembly, with white primer to check fit and body gaps, could the final painting be undertaken.

The show pictures from the 1949 Paris Salon reveal a Notrolac promotional sign on the windscreen, which denotes a special lacquered finish over the paint. “Although the body colour had been stripped in America, we found areas of the original paint under hinges,” says Kudela. “From this we were able to match and mix the correct blue.”

Final touches included renovating the plastic sunroof: “All through the project we wanted to preserve as many of the original features as possible. The sunroof was discoloured but we managed to polish out the scratches and save it.” 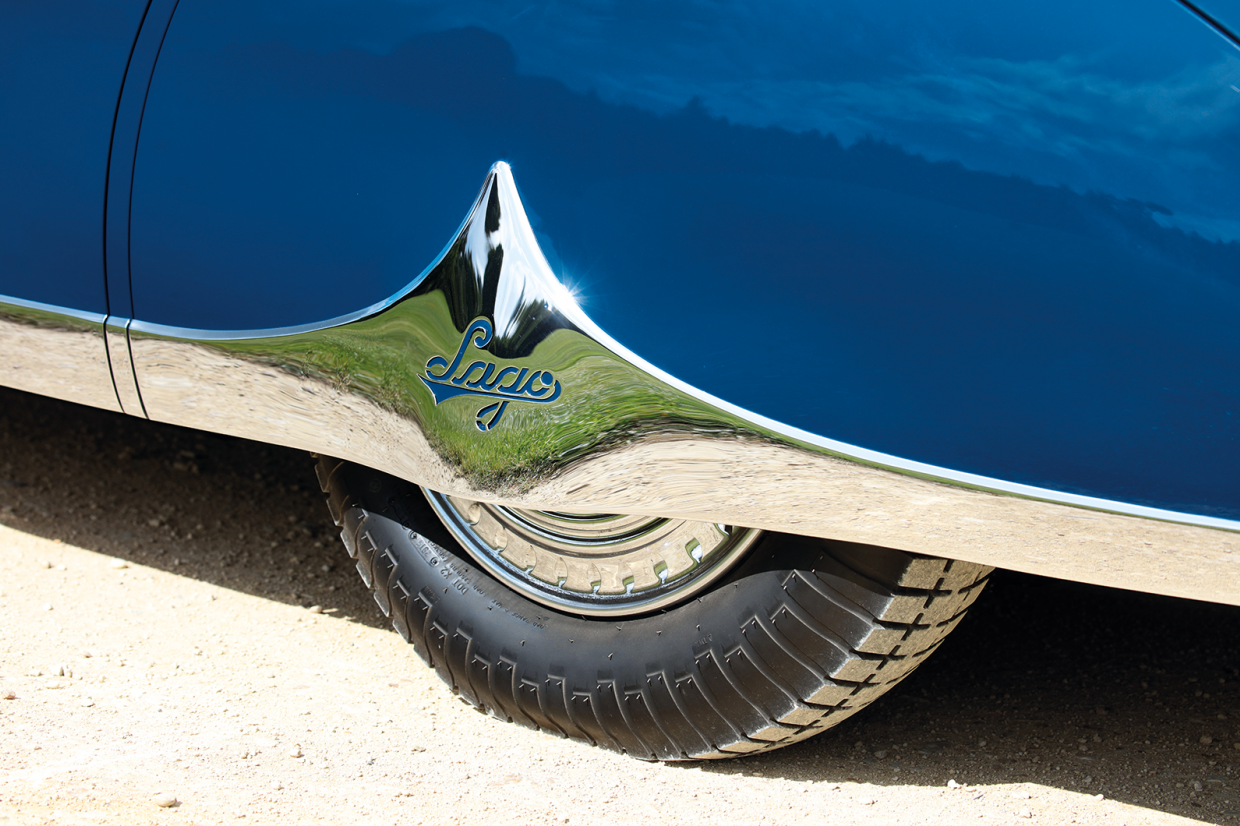 The wheel covers, however, were missing and had to be remade. “It seems they were impractical and photos from 1956 show them already removed,” says Kudela.

“This proved a real challenge. From historical photographs we scaled up the disc design and then made a 3D model before sending the plans to American specialist Mike Rabin to have a set made. They were unique to this Grand Sport.

“We eventually decided to make them in brass and have them chromed rather than the option of aluminium. Both techniques were used in period.”

The mould to press out the discs was eventually made in Kudela’s workshop then sent to California.

“Mike had just celebrated his 75th birthday and had decided to retire,” reveals Kudela. “This was his last project.” 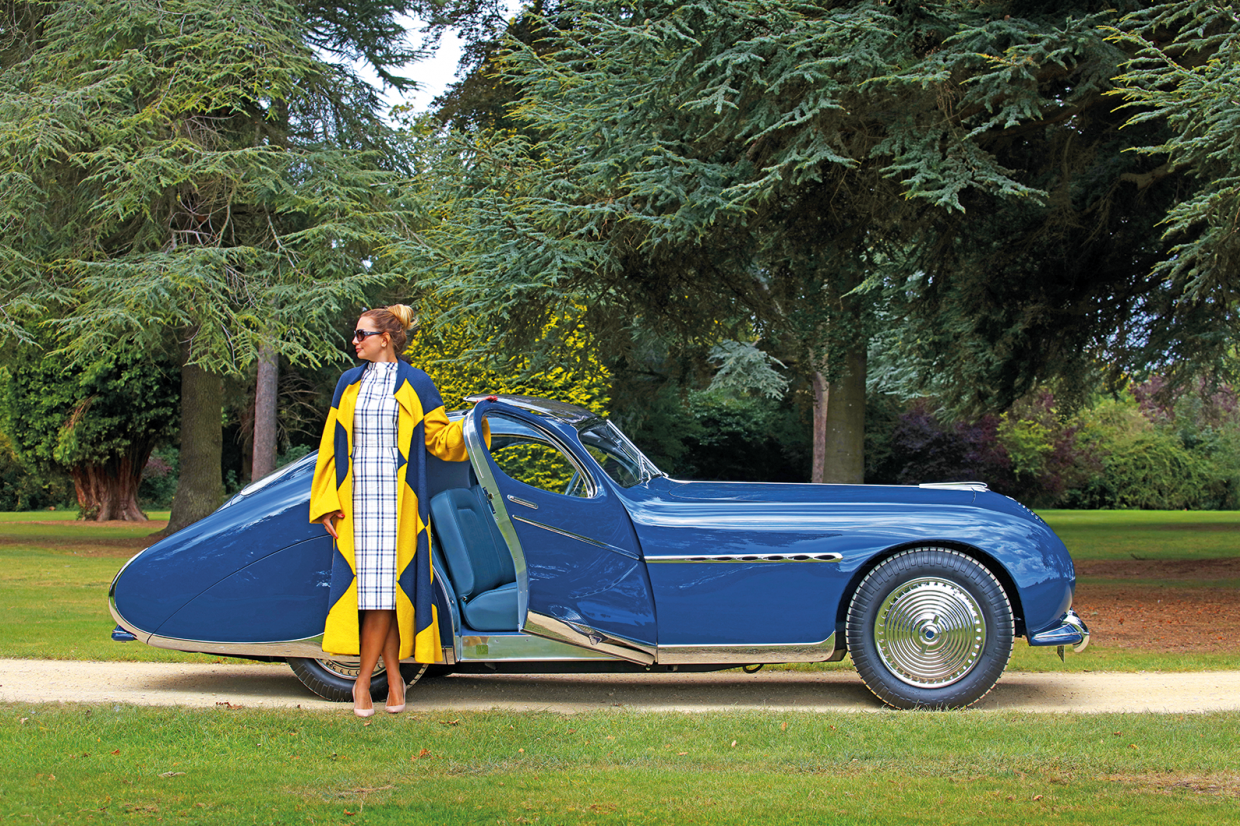 The final touch for the car’s Pebble Beach debut was to recreate the distinctive Dior coat, as featured in the 1949 fashion shoot outside the Figoni works at Rue de L’Église in Boulogne-sur-Seine.

The photographs were for the Salon preview issue of Réalités from October 1949 and, although taken in monochrome, the printed pictures were hand-tinted, which gave a clear guide to the stylish coat’s colours.

With the final testing done, the Talbot was transported to California and Kudela’s dream of showing a car at the world’s most famous concours became reality. 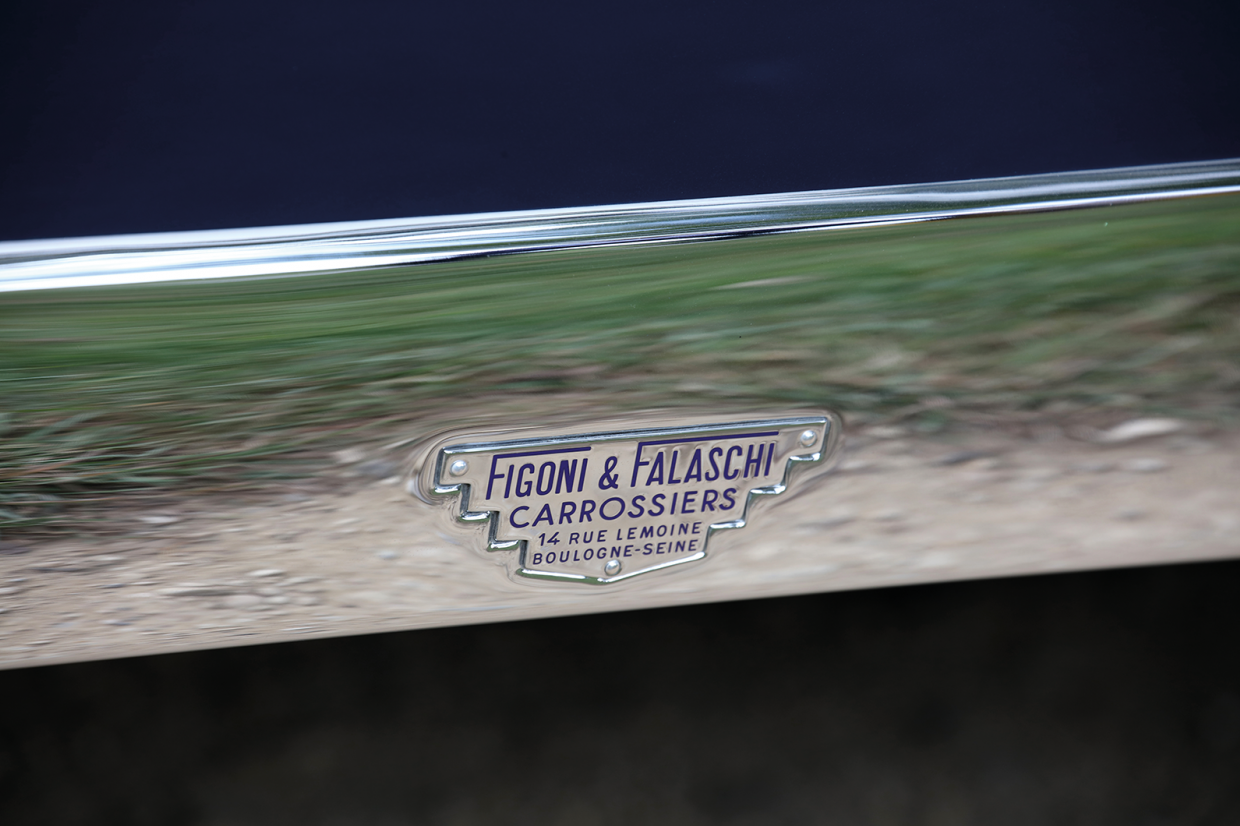 Although the T26 was immaculate, the Kudelas had no hesitation about taking the Talbot on the pre-event Tour d’Elegance.

Not seen in public for nearly 60 years, the Figoni coupé created a buzz when it was unloaded at the Equestrian Center.

Many try to guess the potential Best of Show as the cars line up for Thursday’s run and the ‘Zipper’ Talbot was the car everyone was talking about.

With a sporty chassis under the Figoni coachwork, and crisp exhaust evoking the Le Mans Talbot-Lagos, it sounded as good as it looked as it rasped along Highway One. For the Kudela family, driving to Big Sur and back with beautiful views of the Pacific was unbelievable.

On the famous Pebble Beach fairway three days later, the quality of the restoration and the authenticity of the finish greatly impressed the judges and the Talbot won its class.

Late in the afternoon, when the top three contenders were called to the awards ramp, it lined up with David Sydorick’s Alfa Romeo 8C-2900B Touring Berlinetta and the Lehrman Collection’s 1929 Duesenberg J Murphy Town Limousine.

At the final count the Alfa won, but the Kudelas were rightly proud that a Czech restoration on its debut came so close to the ultimate concours gong.

Since that Pebble Beach debut, the Figoni Talbot has been shown twice in Europe, returning to France for the first time in 60 years for the Chantilly Concours d’Elegance in June 2019, and a few months later at Salon Privé at Blenheim Palace in September. 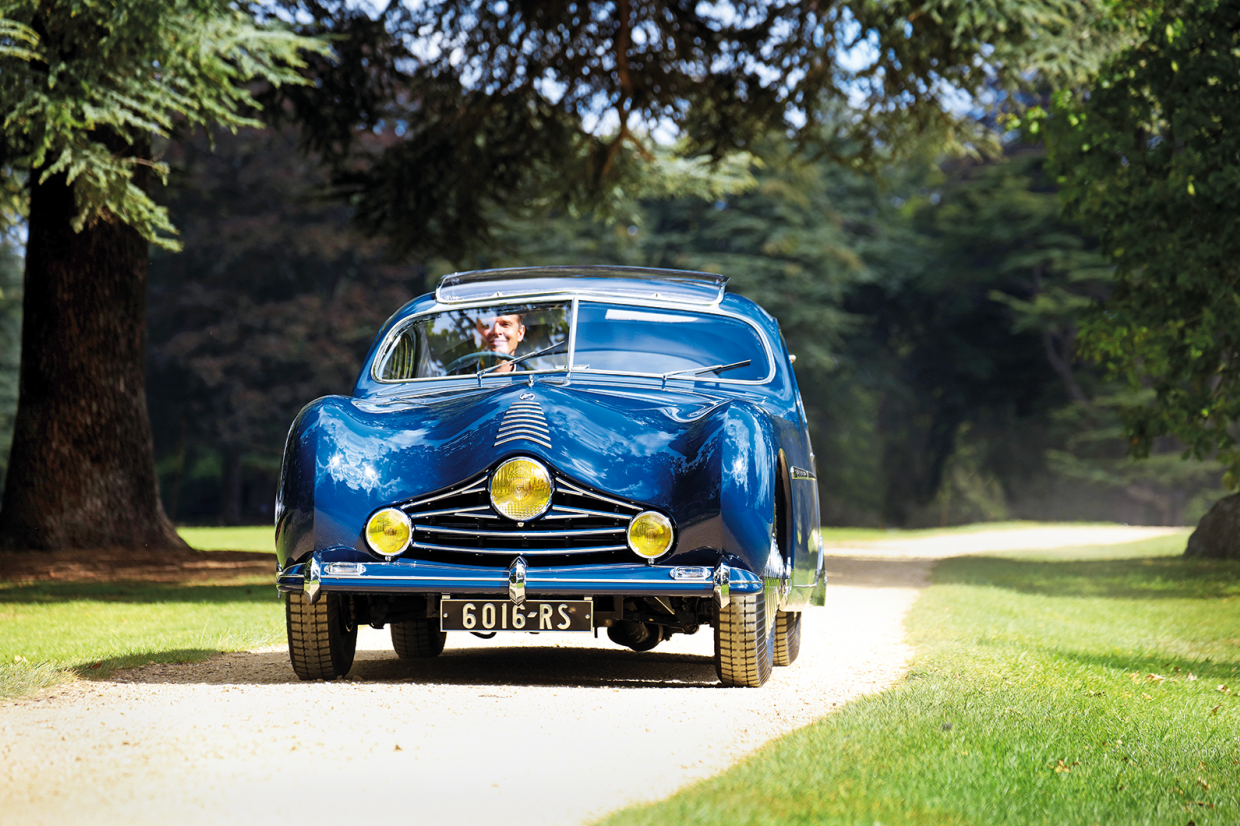 “The Talbot is really sporty to drive,” says Kudela. “The performance often surprises other entrants. On the Oxfordshire road run [as part of Salon Privé] we had no trouble keeping up with the Ferraris.

“The 4½-litre straight-six has great torque and on the dyno produced 200bhp at 4200rpm. With the Wilson preselector the gearchanges are fast, and the hydraulic brakes are really good. It’s very much a sports car beneath the coachwork.”

At Chantilly and Blenheim the car again impressed judges, garnering Best of Show at both. 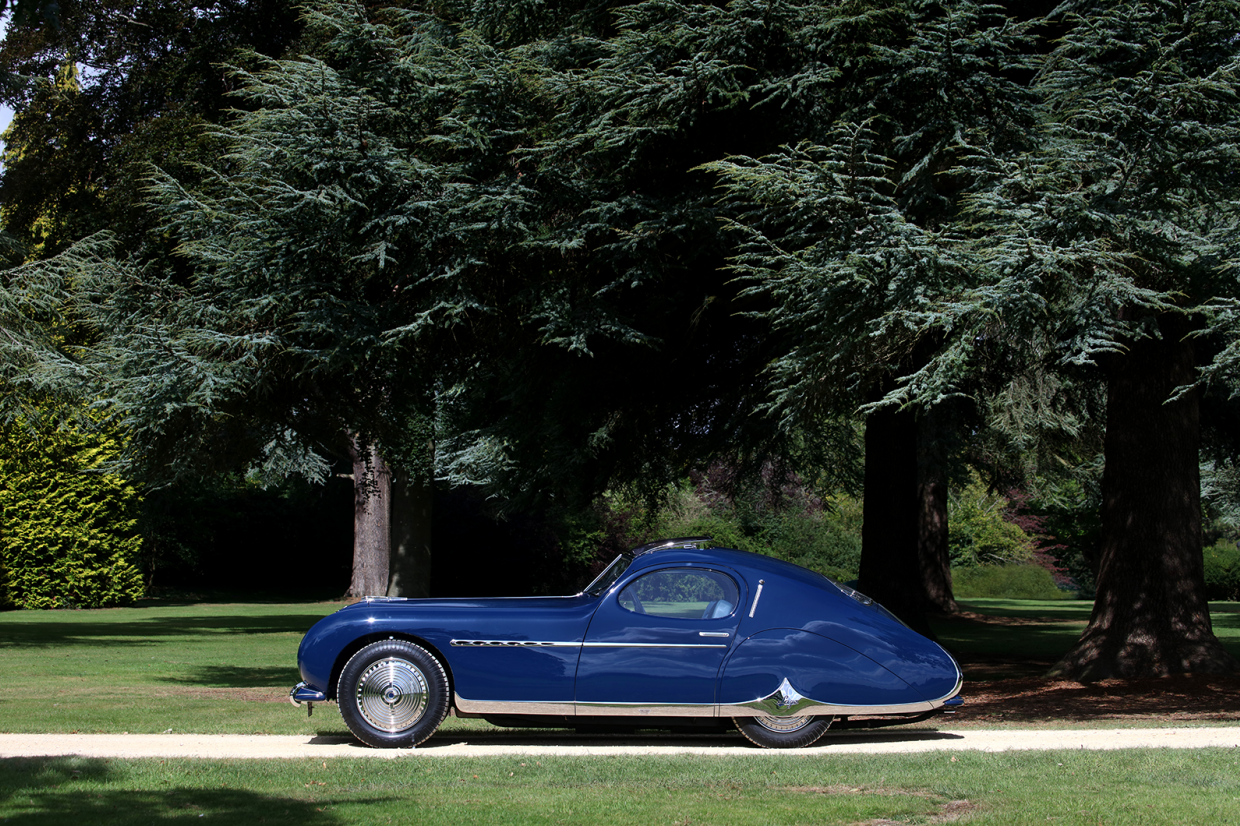 For the Kudela family it has been an amazing journey, and they are now focusing on their second Talbot-Lago Grand Sport restoration, this time of the spectacular Antem coupé.

The car had uprated Grand Prix Talbot specification from new and is scheduled to make its debut at Pebble Beach next August. I’ll put money on another Czech restoration being a favourite for Best of Show. 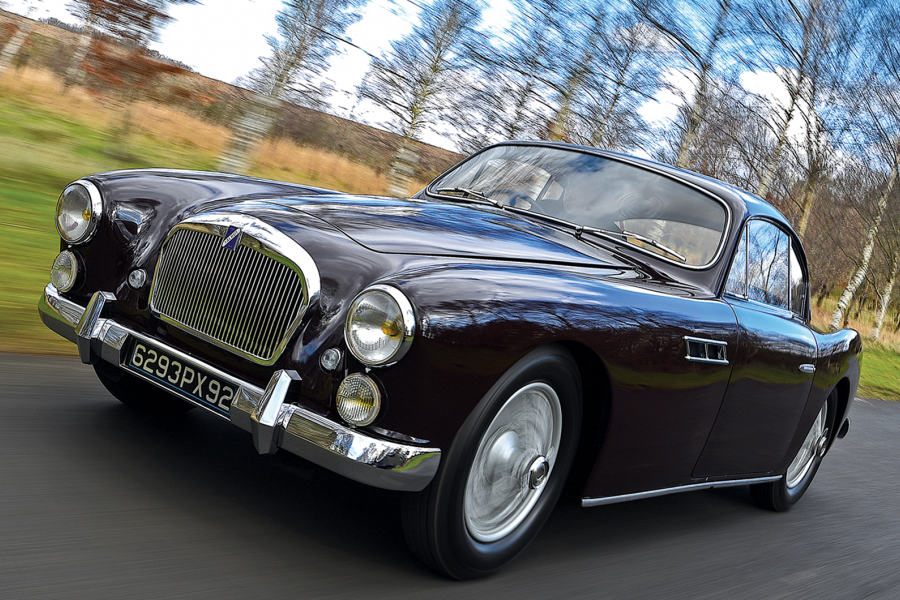 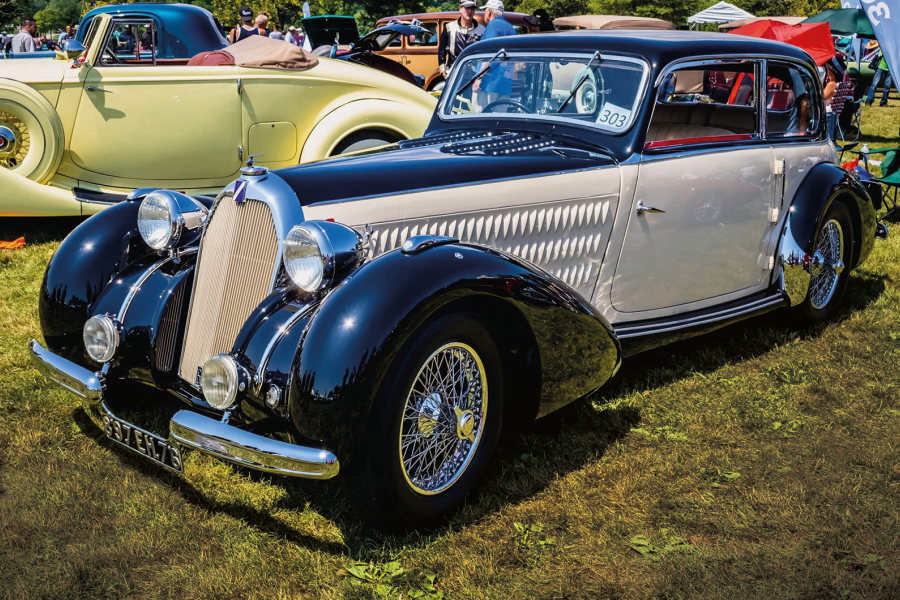 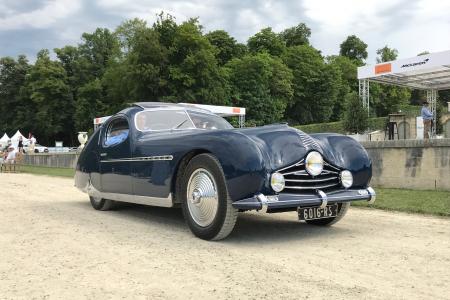 Talbot-Lago is cream of the crop in Chantilly