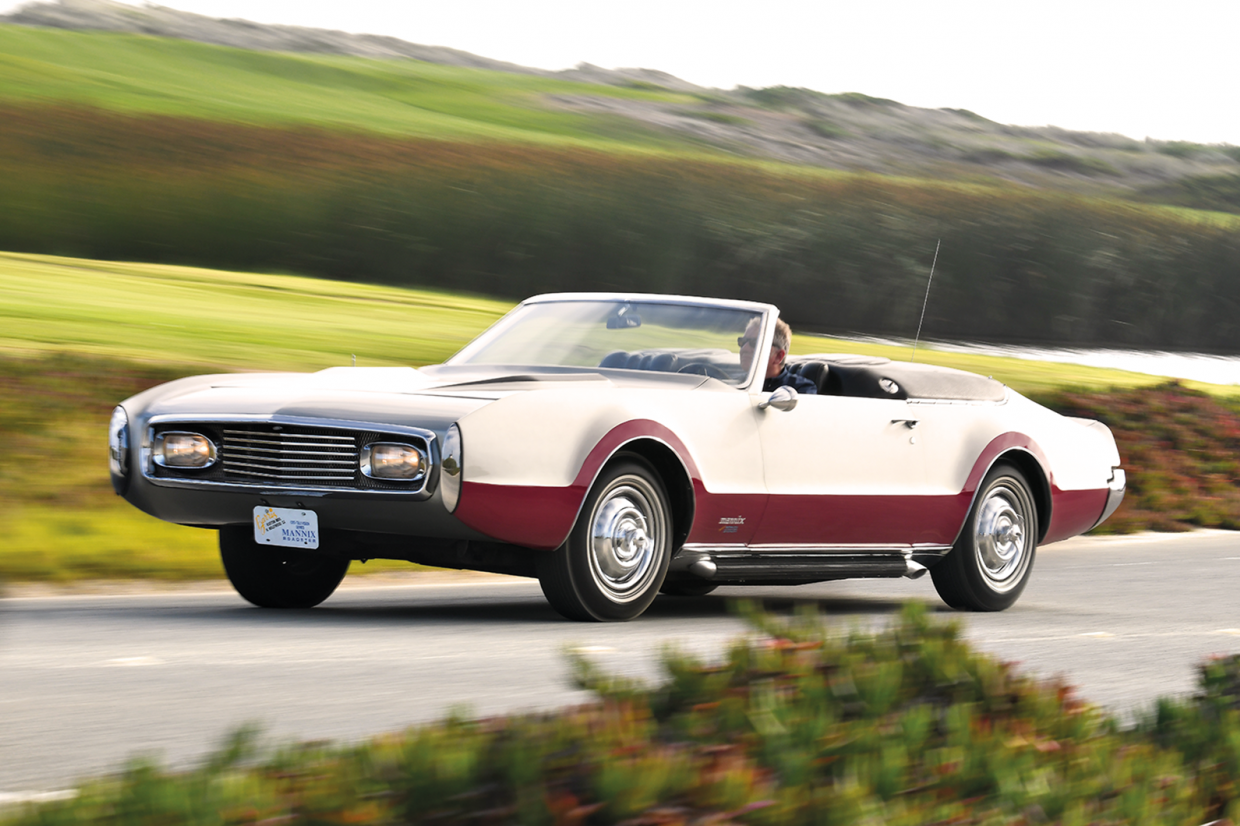 A slice of TV cheese typical of its late-1960s origins, Mannix was eight seasons’ worth of crime-busting, tyre-squealing adventure following the proven car-chase/punch-up formula.

Deemed worthy only of insomniacs in the UK, this glossy action series always drew big primetime ratings in the USA, right through to when it was pulled in 1975, despite a general move towards grittier, more realistic ’70s heroes.

Korean War veteran and karate black belt Joe Mannix was an LA-based private eye played by Mike Connors (1925-2017), who by 1967 had appeared in more than 20 films and made hundreds of TV appearances.

With his lopsided smirk, the 42-year-old was a familiar face rather than a household name. It was television that made Connors famous, mainly thanks to Mannix. 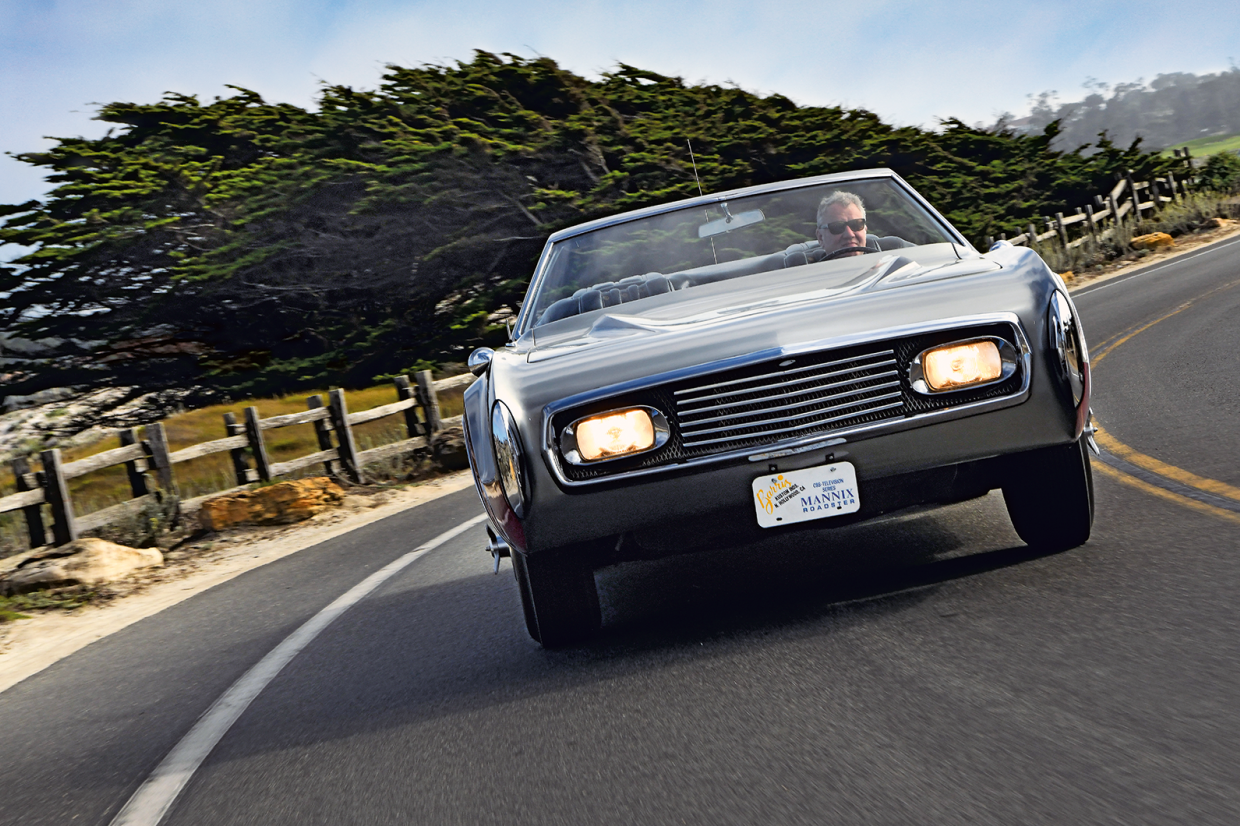 Featuring one of Lalo Schifrin’s less memorable theme tunes, the series was produced by Lucille Ball’s Desilu Productions and emanated from the same CBS/Bruce Geller stable as Mission Impossible.

In real life, Connors had a weakness for interesting cars and was squiring around Hollywood in a Derby Bentley at the time he was offered the lead in Mannix.

In fact, he later claimed it was the Bentley, bought from an English couple on a US road trip, that got him the part.

When he visited Desilu Productions in the car, Lucille Ball’s husband and business partner Desi Arnaz wanted to buy the Derby on sight and gave Connors the Mannix scripts to read. 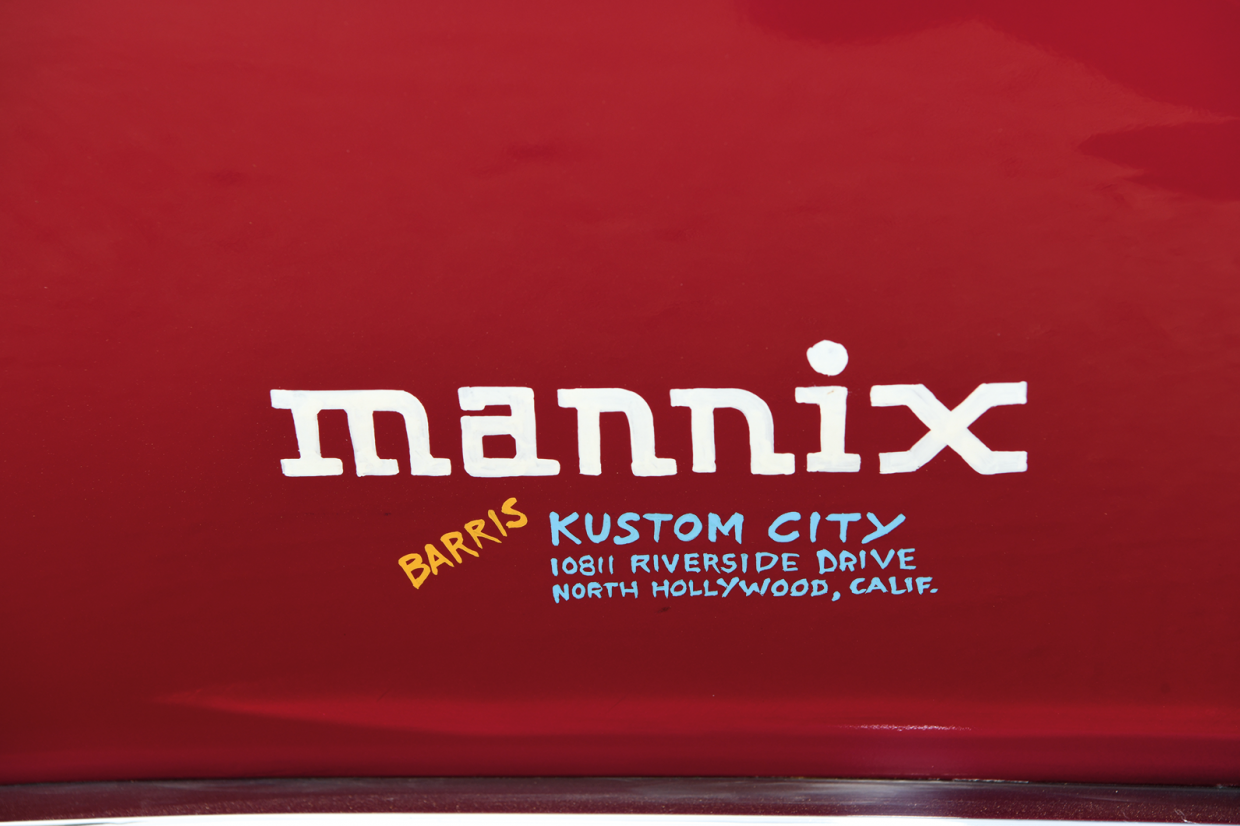 From the beginning the character was supposed to drive a distinctive car, but for the first few episodes Mannix was seen using a variety of routine Mercury and Ford saloons.

Then, in episode three, he upped his game to a silver-and-black roadster of indeterminate make and model: a huge two-seater created for the series by George Barris.

As customiser to the stars (remember Sonny and Cher’s Mustangs?), Barris needs little introduction: he was chiefly famous for his original Batmobile and the Munster Koach, and had enjoyed a close relationship with the film and TV industry since the ’50s.

Given that the Mk1 Batmobile started life as an already fairly outrageous Lincoln show car, it is probably safe to say that the Mannix roadster, based on a showroom-fresh Oldsmobile Toronado, was a greater stretch of his talents. 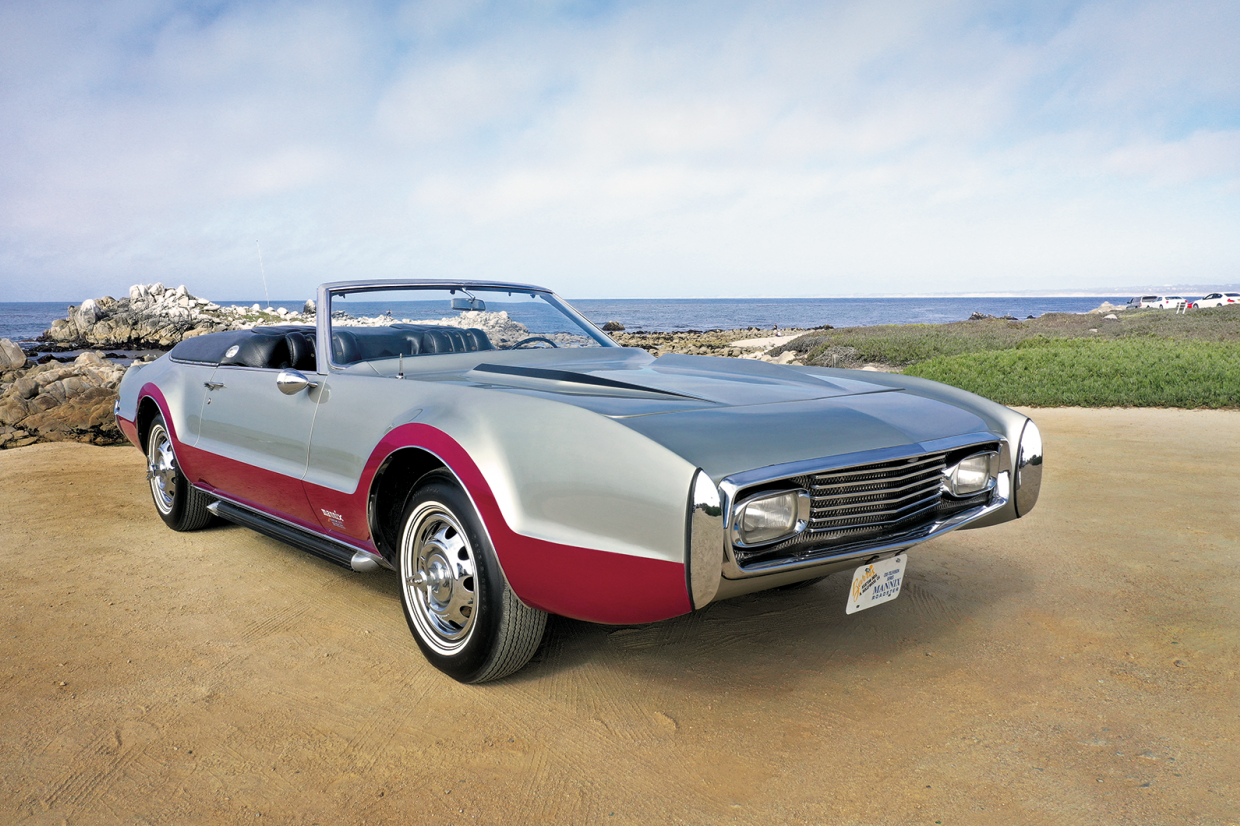 The choice of a futuristic Toronado was probably linked to the high-tech feel of the series during its first season, when the character was not a freelance PI but part of an organisation that used computers to solve crimes.

Also, Barris had just produced a set of highly modified Toronados for the Esso display at the 1967 World’s Fair.

His choice of the front-wheel-drive Oldsmobile would not prove unique among the custom crowd, either: the 1969 Panthermobile was Toronado-based, too.

There is some conjecture in my mind about the year of the car the Mannix roadster was based on – the exposed brake-drum wheels suggest a 1966, but the steering wheel says ’67.

Whichever the case, Barris chopped the roof and, after removing the rear seats, covered the space with a giant glassfibre tonneau cover that hid a (rarely seen) hood and various spare crime-fighting implements. 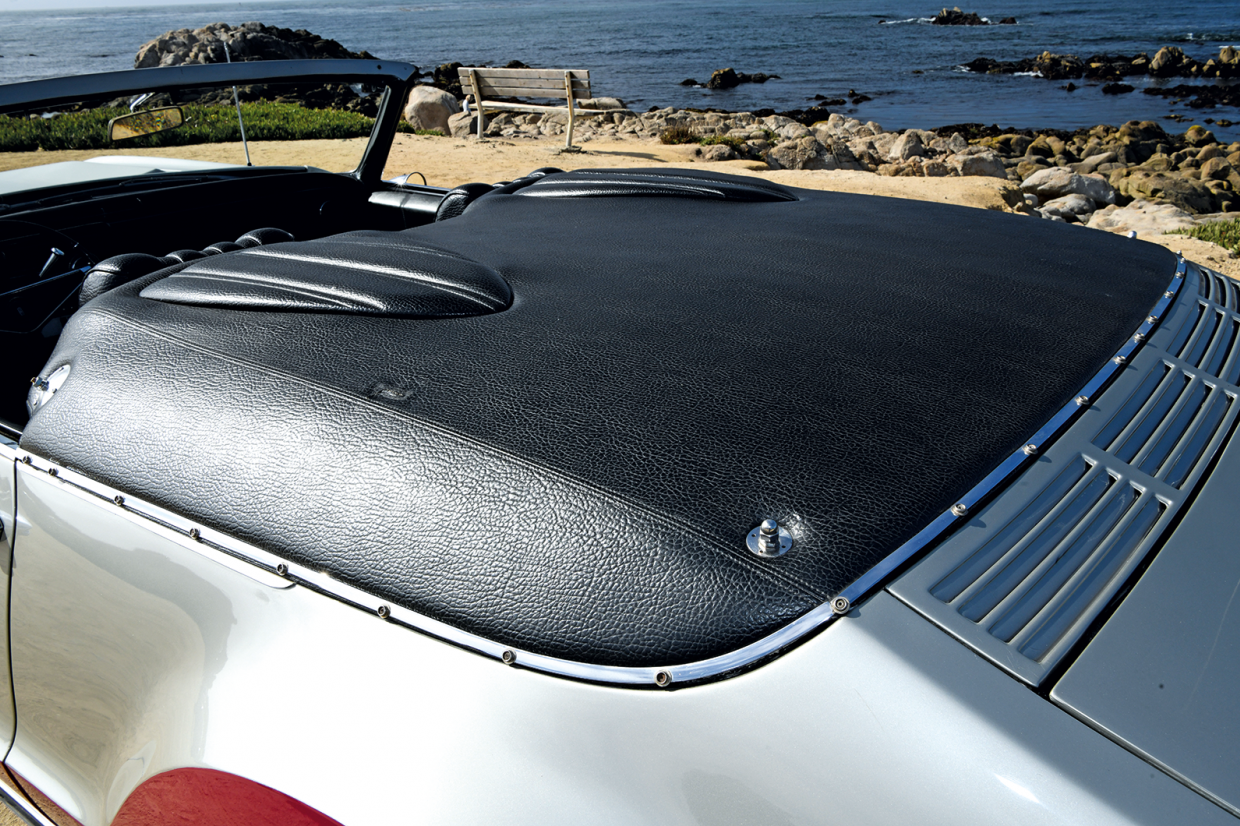 The giant doors, then the longest on any production vehicle, were the only steel panels that Barris left standard.

Some 30 coats of semi-gloss Platinum Star metalflake paint were applied, with contrasting black reaching halfway up the doors and over the wheelarches.

At the front, the pop-up lights were replaced by circular sealed-beams on either side of a bespoke grille, and the bonnet grew twin power bulges.

With the slim bumperettes on the ends of the wings, this was perhaps the most effective part of a transformation that somewhat predicted the revised front-end look of the 1970 production Toronados.

Less convincing was the Pontiac Firebird-like lip spoiler on the rear deck and full-width tail-light panel.

Fake wheel spinners and faux side pipes hardly seemed ideal for a private eye who was, presumably, trying to keep a low profile. 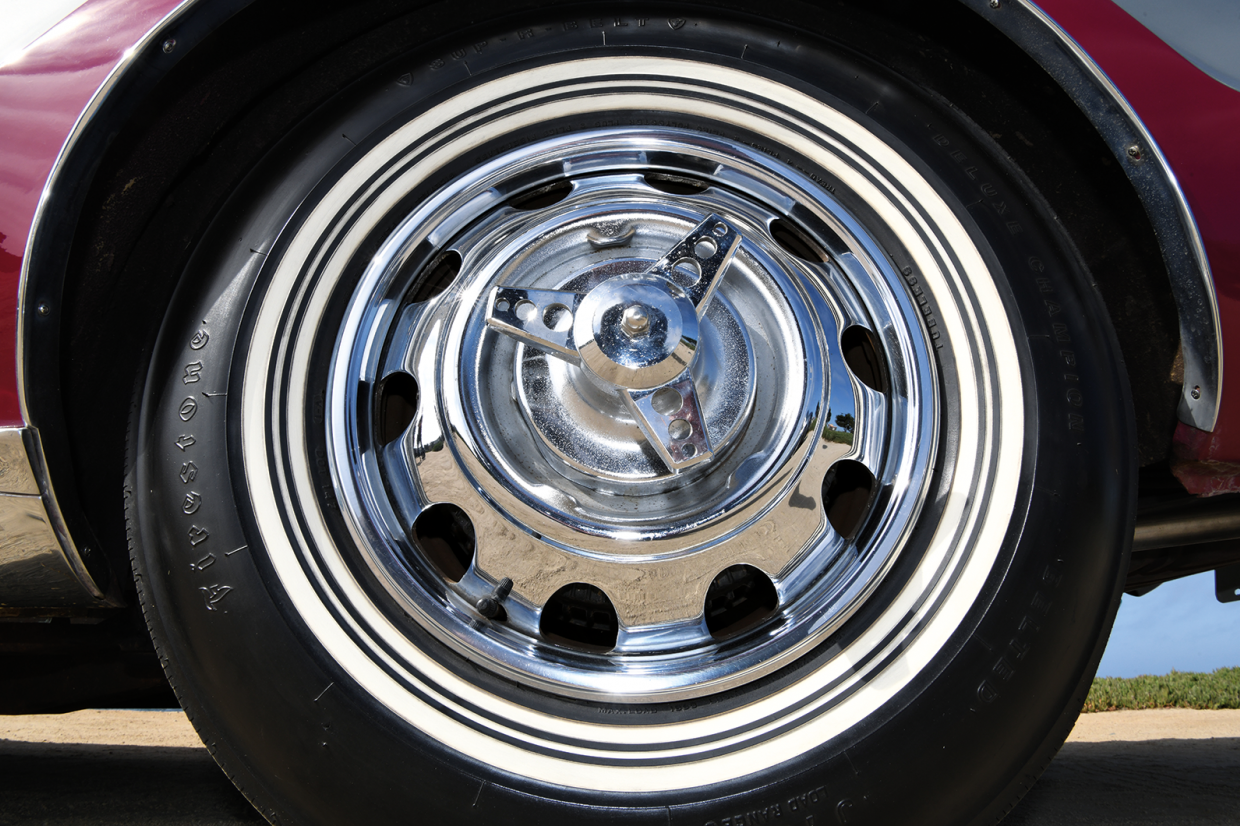 The Toronado reprised its role in season two, by then with contrasting dark red on its lower flanks and with the circular headlamps changed for European-style, lozenge-shaped units believed to have come from a Citroën Ami 6.

It was in this form that MPC Craft Master thought the Mannix roadster was worthy of a 1:25 scale plastic kit, now extremely rare.

Barris produced a second car for stunts, not that it featured in many of them because Mike Connors didn’t like driving this full-sized front-driver all that much, recalling in an interview that it “handled like a parade float”.

‘Our’ Mannix roadster is the close-up car, spotted last year nestling among the exotica in Worldwide’s Pacific Grove sale during Monterey Car Week in August.

It looks marginally better in the metal than it does two-dimensionally, with a nose treatment that appears more Turin than Hollywood.

With 25,000 miles recorded it appears totally original, even down to its tyres. 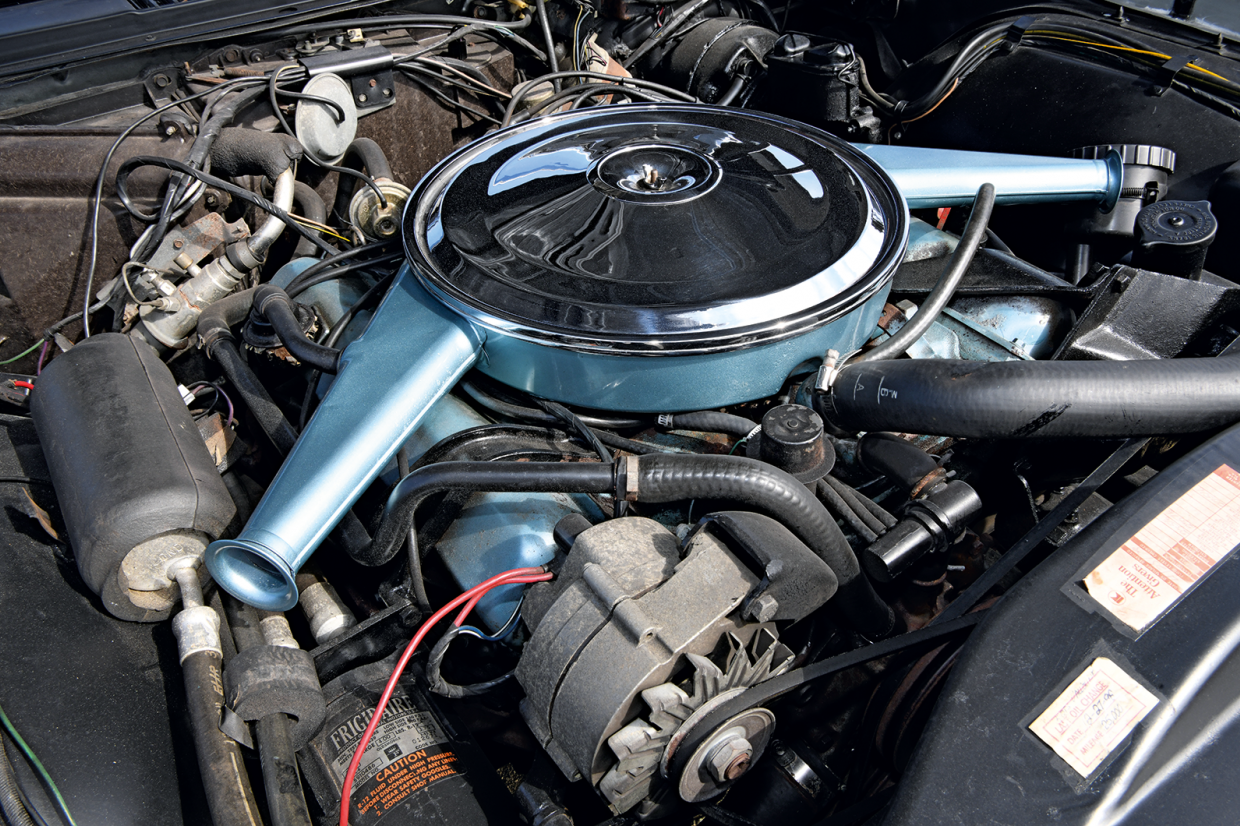 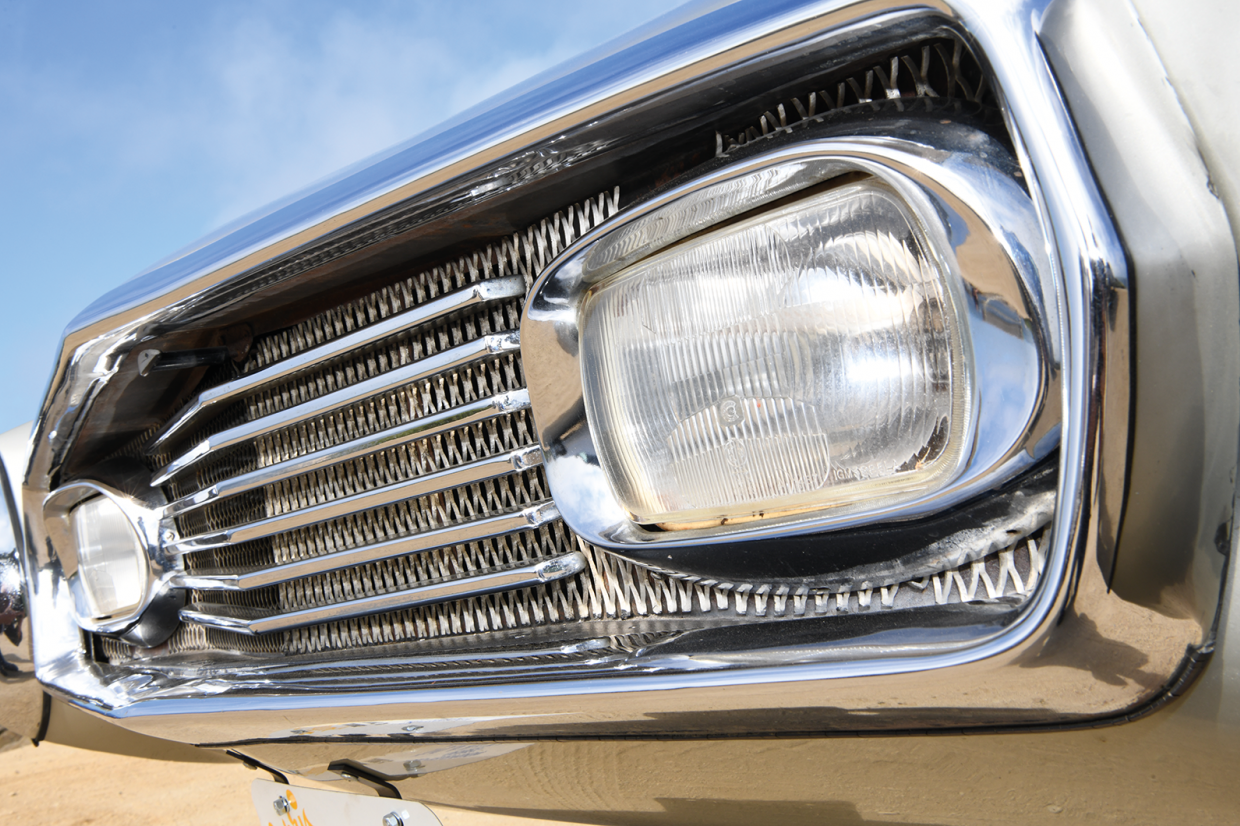 Since leaving Mannix in 1968 the Toronado has spent most of its time as a static exhibit, which accounts for its originality.

The first civilian owner was a New York property developer who used it as an attraction at his amusement park.

Given that level of inactivity it runs quite well, and was completely tolerant of being hustled along the Monterey peninsula for pictures.

Connors’ thoughts on the handling probably relate more to the fact that the structure is not especially rigid with the roof removed – to be honest, even the standard car is marginal in that department. 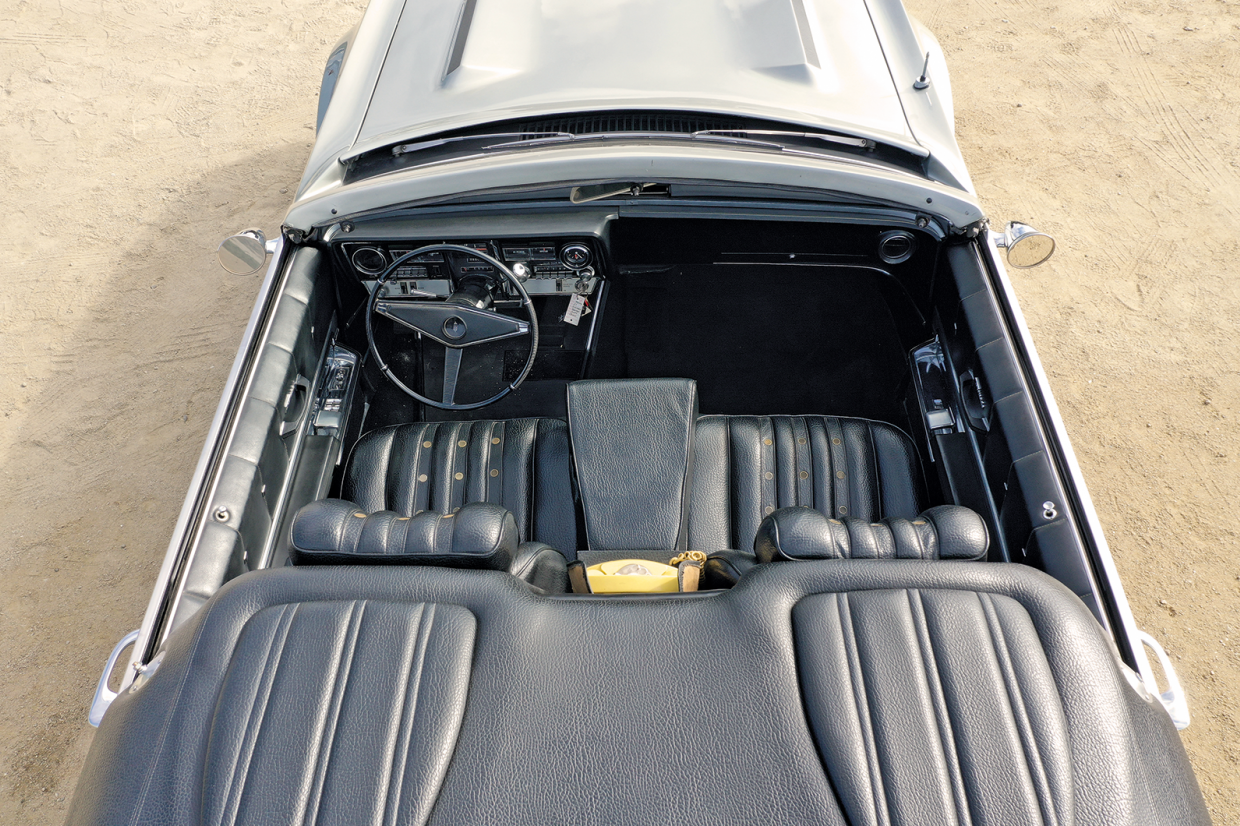 Inside, the dashboard, which shudders visibly over bumpy surfaces, is mainly stock Toronado, which means a barrel-type speedometer and no rev counter.

There is no steering ‘feel’ to speak of and the car either floats and wallows on its original dampers or squeals and scrubs its tyres on every turn, although essentially it hangs on reasonably well.

The grabby, sharp brakes need care if you don’t want to lock up the rears in a plume of tyre smoke.

I didn’t find the short-wave radio, but you can hardly miss the cream-coloured telephone nestling between the front seats.

The centre armrest doubles as a locker for a pistol and the seats are, allegedly, heated. 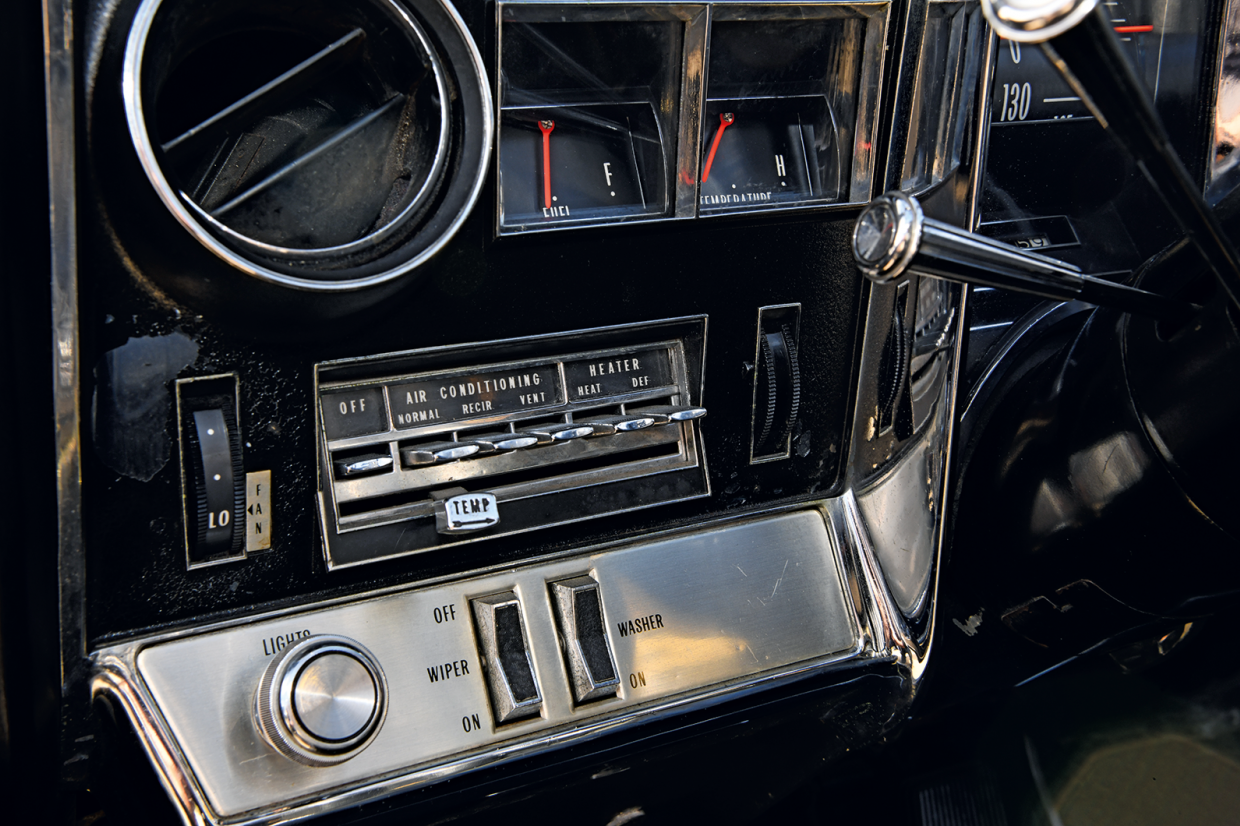 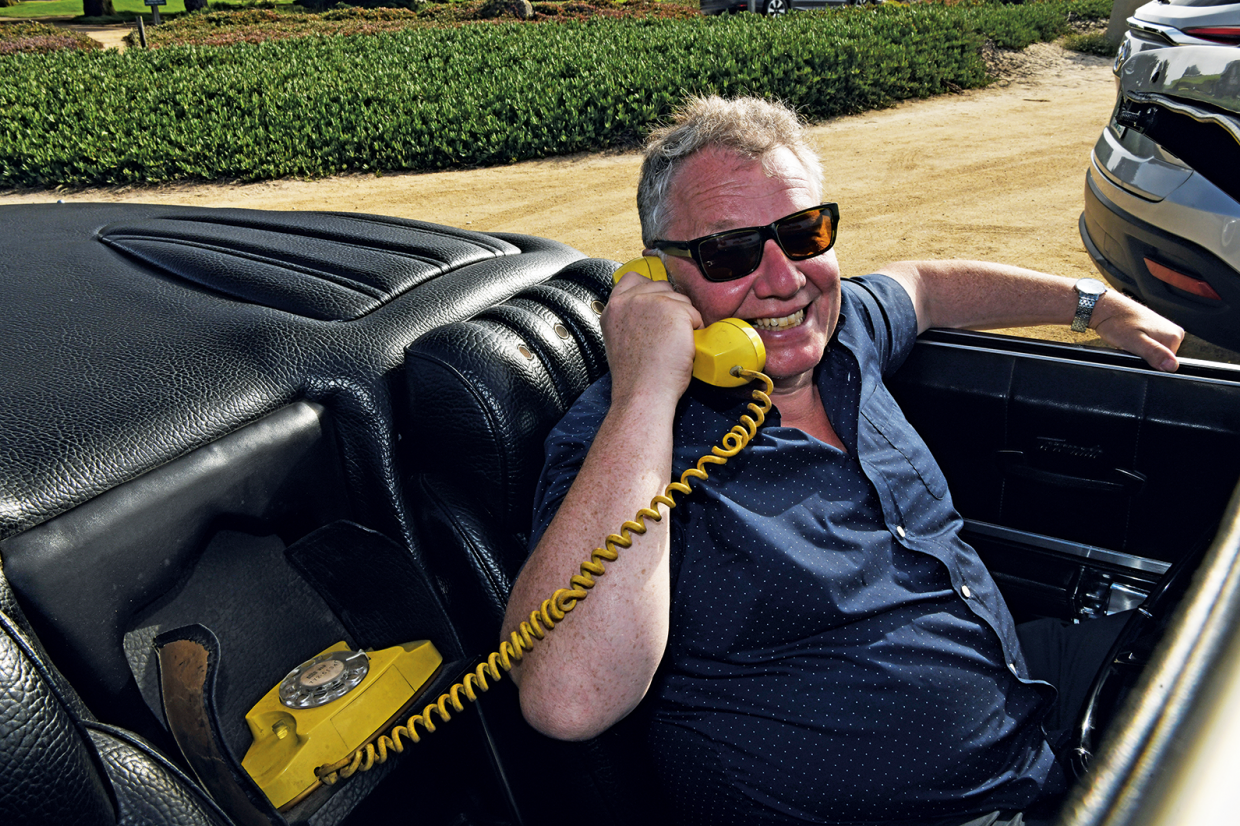 Out on the road, onlookers gawp at the car, some with a slowly dawning recognition of where they have seen it before.

A few youngsters even cheer – relieved, perhaps, to see a vehicle in California that is not some pious eco statement but unashamedly wasteful and decadent.

The car probably hangs together better than the series itself when viewed today, although both have a certain ironic appeal.

Squeaky-clean Connors is frequently beaten up (he was knocked unconscious 55 times), but gets brownie points for doing his own stunts: he was famous for barrel-rolling out of moving vehicles and, generally, coming up shooting, quiff intact.

Those recidivists our hero could not disarm with his tough-talking one-liners, he could bring around to his way of thinking with a readily brandished Walther PPK or a karate chop. 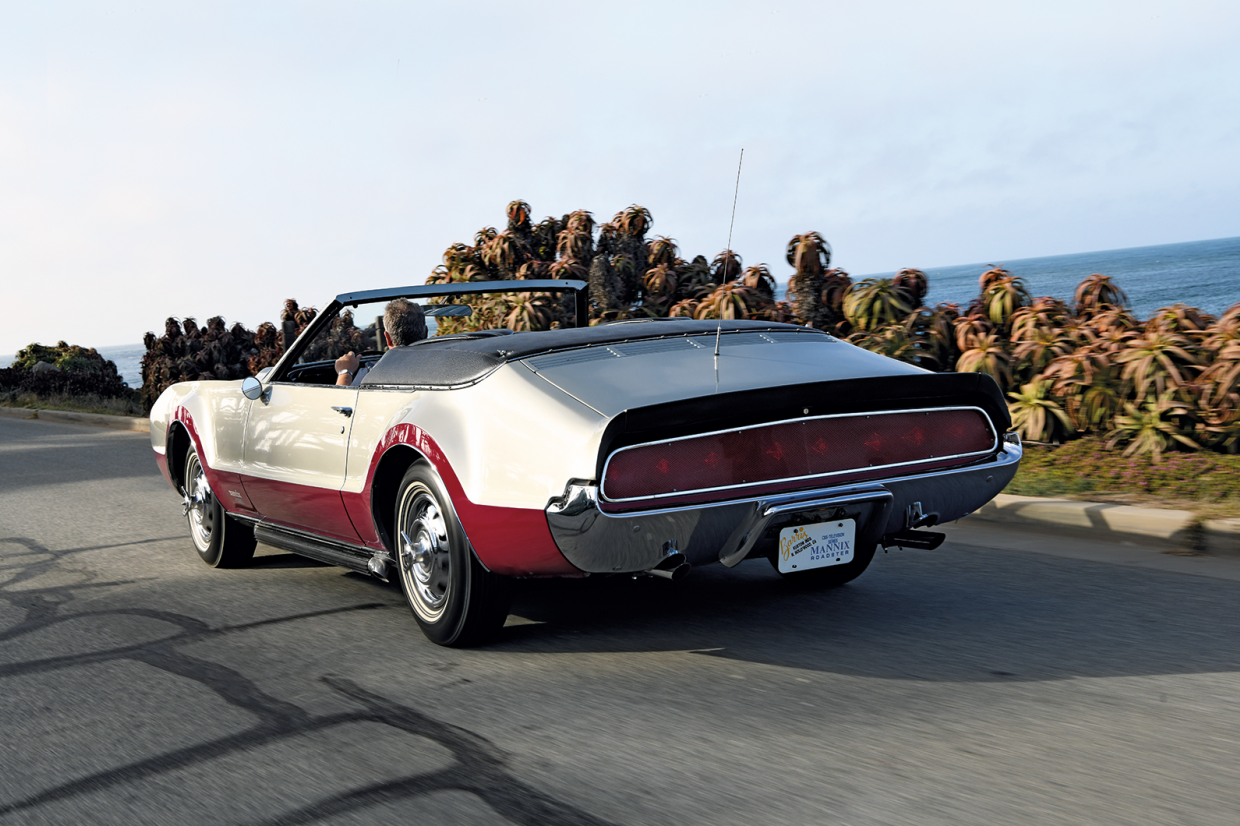 About the only edgy thing about the show was the fact that Connors’ Simca-driving secretary was one of the very few regular black characters on American television at the time.

There is no blood, sex or swearing in Mannix, where the action plays out in an eternally sunny world of conveniently positioned empty cardboard boxes on the Paramount Studios back lot, with regular forays out on to canyon roads for chase sequences that were not the strong suit of this bespoke roadster.

It was for this reason that it was pensioned off in season three in favour of a Dodge Dart GTS, also Barris-modified but much less conspicuous.

Even in late-’60s la-la land, the idea of a private eye maintaining discretion in a 7-litre, 18ft-long, two-seater one-off convertible stretched credulity somewhat.

Thanks to Worldwide Auctioneers 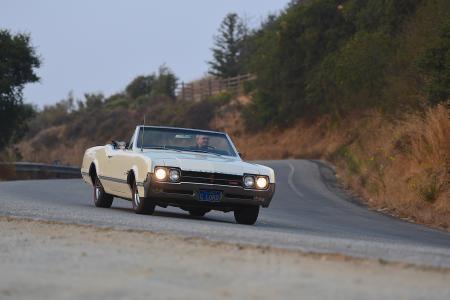 One man’s lifelong love for an Oldsmobile 442