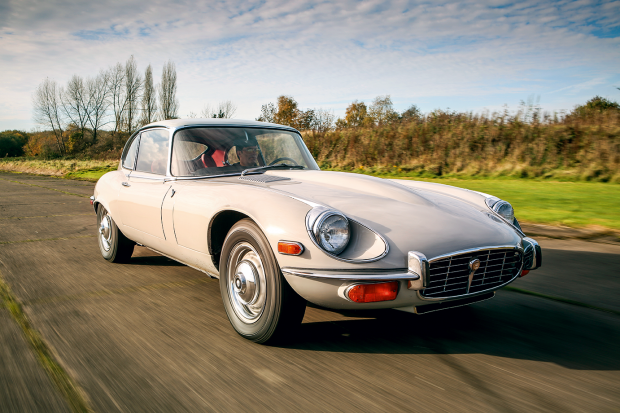 Now, this is strange. It’s a Series 3 E-type all right – softer, like the two-door XJ that it wants to be, power steering and all, but with a hidden surprise.

Instead of the turbine smoothness and near silence of the aluminium V12 that you expect, it delivers the more raucous clamour of the earlier model: sure enough, under the bonnet is an XK straight-six. What manner of cross-pollination is going on here?

When Jaguar redesigned the E-type to accept the new 5.3-litre V12, updating the styling in the process, a few development cars were fitted with the straight-six, carried over from the Series 2. It’s thought that about half a dozen were built, starting in 1969 though the first couple by all accounts were modified S2s. But this carries chassis number 1… even though it didn’t come into existence until August ’71.

It is the famous ‘Ghost’ E-type, the first and only left-hand-drive 4.2-litre S3 2+2 built. And, rather than being lost in America as the 1986 New Jersey windscreen sticker might have us believe, it’s been hiding in Cheshire for the best part of the past 30 years. 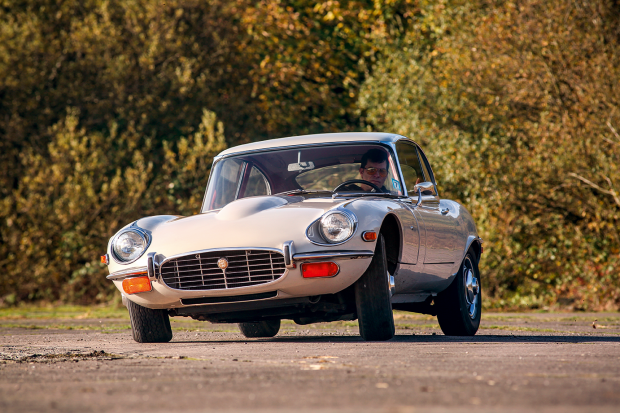 It leans on aged P5 tyres

As well as the clumsier styling, with heavily lipped arches and a larger intake to feed more air to a larger radiator, under the skin the Series 3 received a new bulkhead and front subframe to contain the 60º V12, along with a wider track and bigger brakes. With the new motor representing a relative leap into the unknown and the XK unit having a loyal following (five wins in the Le Mans 24 Hours can’t be wrong), Jaguar clearly engineered the S3 to accept both powerplants.

Though it never officially appeared as a listed model, Jaguar did print up brochures showing the ‘six’, under a shot of the V12. So it must have been considered as a lower-cost option, or as a hedge against potential warranty claims. In much the same way as the XK unit before it in 1948, the V12 was debugged in the sports car before being offered in the higher-volume XJ12 saloon in ’72. 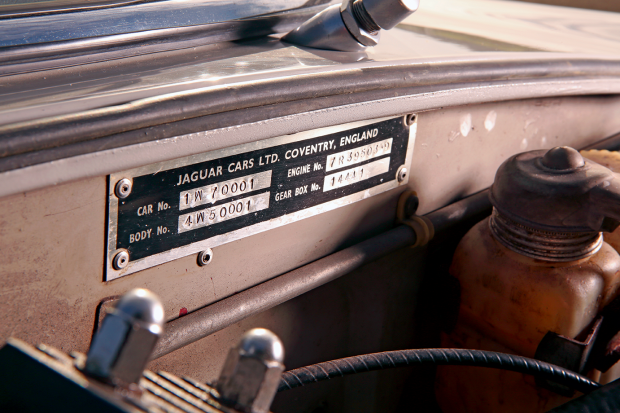 Chassis plate confirms its number one

H&H did some diligent research before offering the car for sale, and we can now fill in a few gaps. A letter published in the December 1980 Jaguar Driver, from the car’s then owner James Johnson of Brooklyn, New York, outlines its early history:

‘The car is in all-original concours condition save the new paint job, carpeting and exhaust I have had to restore. I have won second and third prizes in Empire Division Jaguar Club Concours. The only work needed on the car is to have the engine detailed. After purchasing the car I became interested in its history and wanted to confirm my suspicions that it was extremely rare. I wrote to Mr Bob Lewis at Jaguar Service, Radford, who responded via Cindt Greico at Jaguar Rover Triumph in Leonia, New Jersey. It seems that this response had crossed the desk of Mr Graham W Gardener, manager – engineering liaison of JRT and he wrote to me personally.

‘To begin with Mr Lewis confirmed that the car is what I thought it to be. Mr Gardener tells me that this is the Series 3 E-type six-cylinder imported by JRT Leonia. He informed me that this car was used to obtain certification for the 4.2-litre engine for ’71. In addition, the York air-con compressor is unique because Delco-Air units were normally used. In my quest for information about the car I phoned Mr Gardener. He stated that at c10,000 miles he sold the Jaguar to a used car dealership in Queens, New York City.

‘From there a man bought the car, ran it an additional 17,000 miles and died, willing the car to his wife. His wife being completely un-automobile orientated, wrapped the car in plastic and stored it in her garage for five years. She met a gentleman in the interim and, when he proposed and asked her to move out of the state with him, she went about selling the car to me. Unfortunately, the paint discoloured, mottled and peeled off with the plastic when she unwrapped it.’ 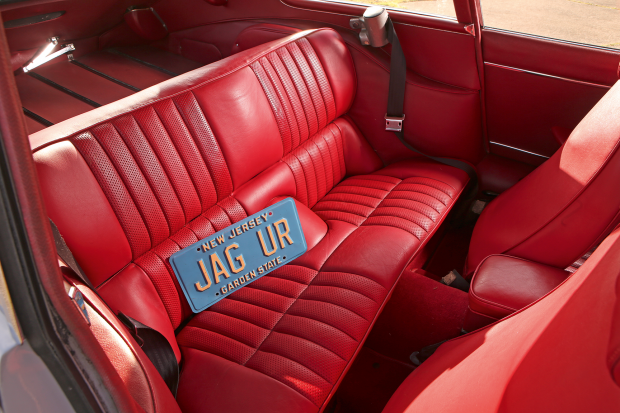 The car has a distinctive personalised New Jersey licence plate

Prior to being sold to the used-car dealer in Queens, NY, chassis 1W70001 is rumoured to have been driven by a female member of the Whitehead family. Graham W Whitehead was president of Jaguar Cars North America for several decades and his involvement might well explain why the E-type was issued with the distinctive New Jersey personalised registration JAG UR, which remains with the car.

According to H&H, it was acquired from James Johnson by marque enthusiast (and former owner of the works D-type OKV 2) Godfrey Miller, who then sold it to Guy Black of Lynx.

“I think Pete Waterman was interested in it because it was chassis 1,” says H&H’s MD Simon Hope. “People know him as a railway enthusiast, but he had about 37 Jaguars at that time, and he just put it in a shed and forgot about it.”

Three years ago, the 2+2 was repainted for the second time, in the Pearl Grey in which it arrived from the US, and recommissioned by Area 51 Engineering, with a new fuel tank and pump. After that, Waterman is said to have driven it once to a pub for lunch and then put it away again. 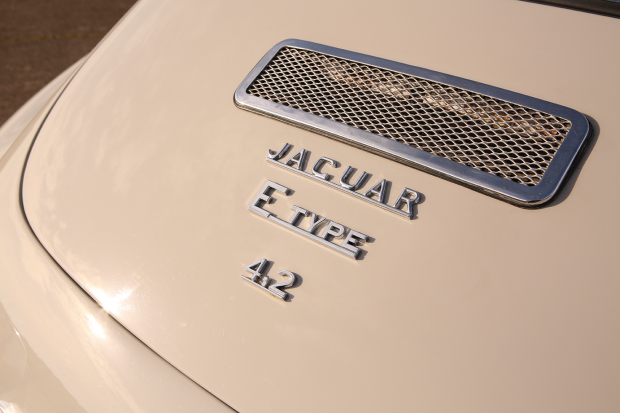 The 4.2 badge marks out this S3 as different from most

Dave Woods of XK Engineering inspected the car and confirmed that structurally it is Series 3, but there are little detail differences everywhere you look. The 4.2 badge on the rear hatch under the air vent and the E-type script is something you’ll see on no other S3, and the engine mounts are rather ‘man in shed’.

As Woods, who worked in the experimental department, says: “They would have just done something that worked.”  The simple twin-outlet exhaust is different to that on V12s, too. It retains all the plumbing shown in that early brochure shot, including bifurcated piping to the wide V12-type radiator, which carries two cooling fans as on S2 and S3 E-types.

The belt drive to the air-con compressor and alternator is rather Heath-Robinson, running over an idler, and there’s a large resistor mounted on the left of the scuttle, hung out in a cooling breeze, probably for the variable-speed heater fan. That’s located over the passenger’s knees with the motor hanging down, next to a homemade-looking casing for the air vents. 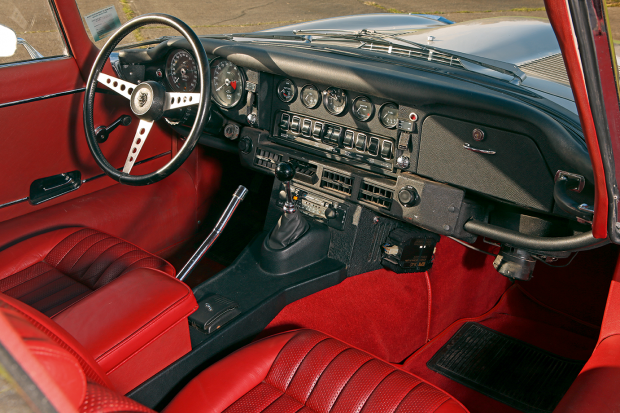 Centre console is a bit improvised, as you would expect with a development vehicle

The centre console for the stereo looks even more amateurish, and the amplifier strapped to its side at first appears excitingly as if it might have something to do with electronic ignition, but turns out simply to be a booster for the sound system, whose rear speakers rest behind the folding seat, held in by gravity. The seat upholstery seems too good to be original, so we’re guessing that it’s a retrim, because it’s all leather rather than the back of the rear seat being vinyl.

The engine itself, according to its number, is a 9:1 compression unit (most US-spec E-types had 8:1 pistons) and has a sequence of mystery grubs plugging tappings in its head, which it’s thought were for an air injection rail. There’s some extra plumbing on the right side by the carburettors, obviously hand-fabricated with neat welds in the aluminium. The twin Strombergs and the air trunking are just as they appear in that brochure. 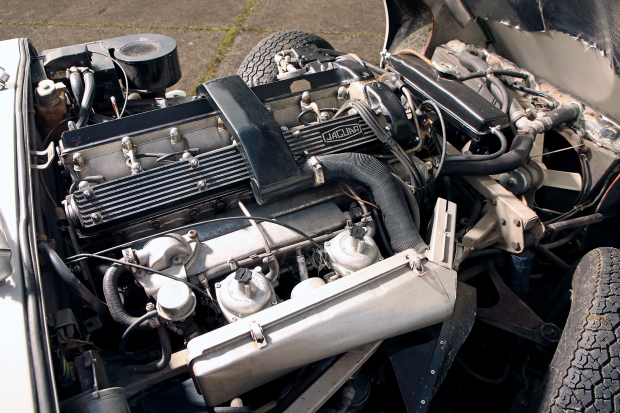 Not what you'd expect to find under an S3 bonnet

The Production Record Trace Certificate doesn’t list a date of manufacture but confirms that the 2+2 was initially finished in Warwick Grey with Red trim and built for Jaguar Cars Ltd Experimental Dept. It also notes that ‘this vehicle was later sent to British Leyland, New York, USA, to participate in engine pollution testing’. Interestingly, the certificate lists it as having been an auto, but Woods says there’s no evidence that it was ever anything but a manual. The gearbox number on the chassis plate is 14441, though the certificate misquotes it as 1441.

So it’s a unicorn, confirmed by Jaguar as one of one. Today, experimental cars end up in the crusher, such is manufacturers’ fear of product liability legislation and expensive lawsuits. Back then, they could be turned into a profit.

Perhaps what saved it was that it was in the States when it came to the end of its service with Jaguar – at Browns Lane you can imagine its component parts becoming recycled into various other projects, official or otherwise. 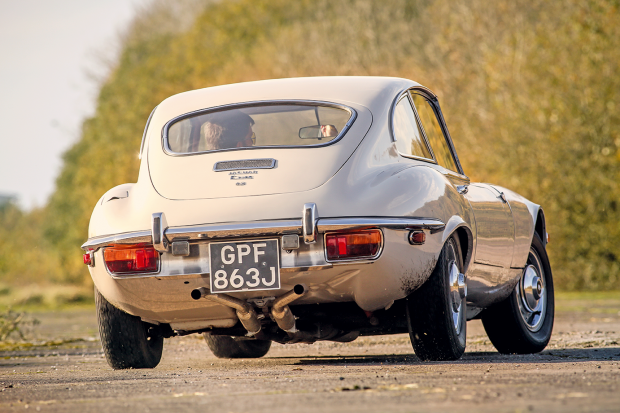 Twin pipes rather than V12 quads

As it stands, it’s not perfect but it’s perfectly usable, and everything works, including the air-con fan even if the system doesn’t blow cold.

The gearchange is rather stiff, and one of the rubber wheelarch seals rubs on the right front tyre on left lock when it leans over – and it leans quite a lot, like all S3s, along with that curious ‘over-centre’ power steering feel that’s much like a first-generation Mustang. But the ‘six’ provides almost as much poke as the V12, along with a sportier character.

It’s worth noting that by 1971 Jaguar was more realistic about horsepower and performance numbers than at the E-type’s launch a decade earlier, claiming only a 135mph top speed for the V12, however fast 9600 HP got to Geneva that famous night. 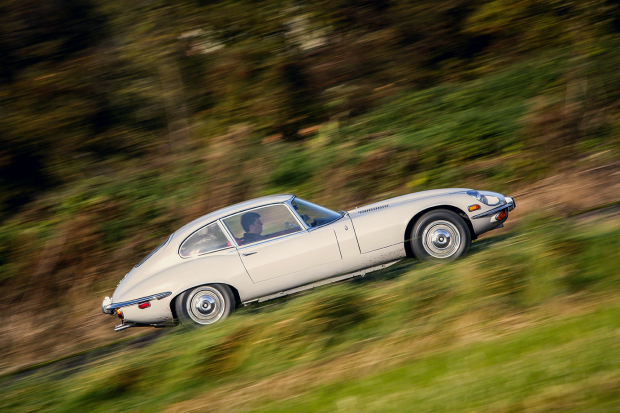 Side repeaters on American car

H&H offered the E-type on behalf of Waterman at no reserve at Duxford on 15 November, estimated at £75-95k, about the value of a nice V12. After a short duel between two bidders it sold for £82,800 including premium, splitting the difference between decent S3 money and the £145k figure that Jaguar put on it.

Given that it’s rarer than a Lightweight, I thought it might do more, but the market clearly values it at about the same as a V12, plus a little for rarity. Which adds weight to the notion that it’s a fascinating might-have that probably should have been. 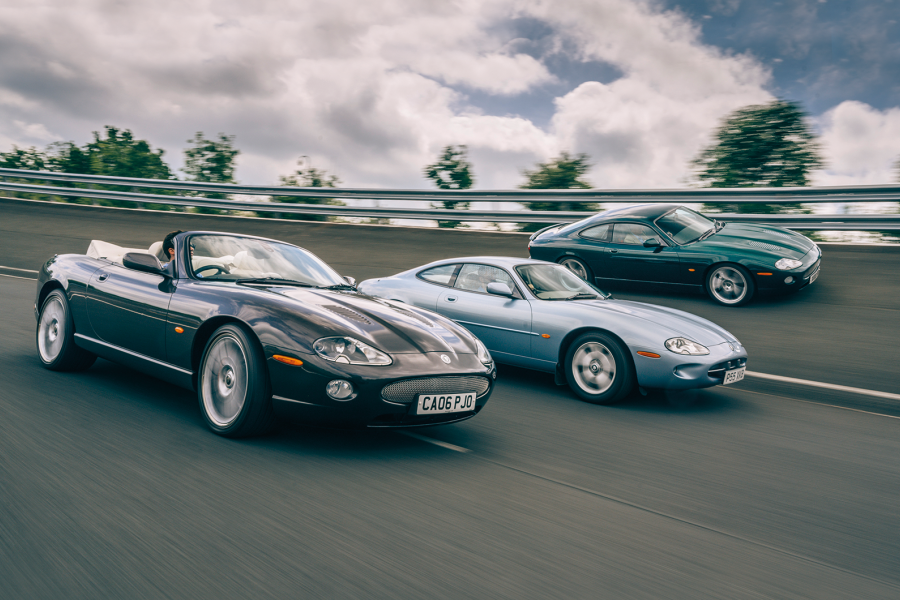 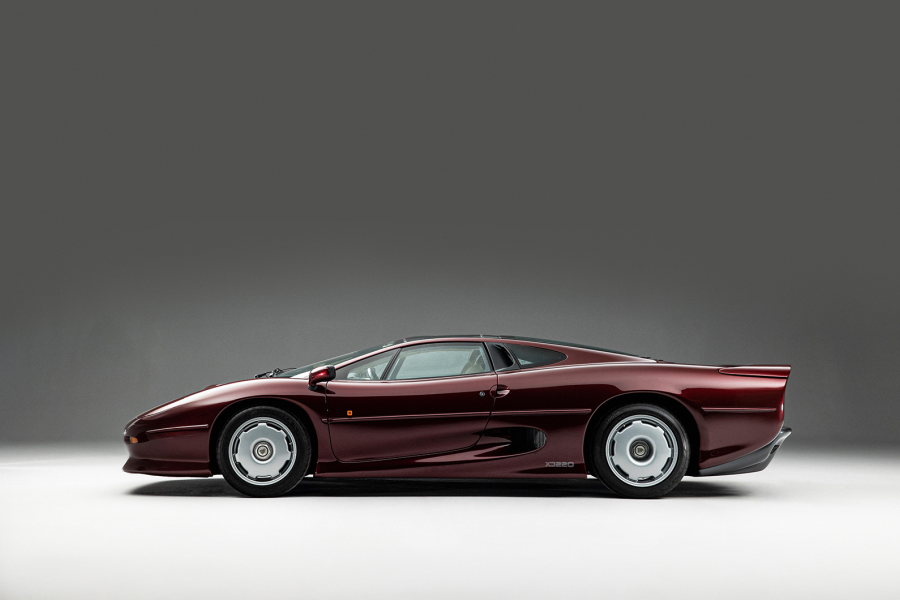 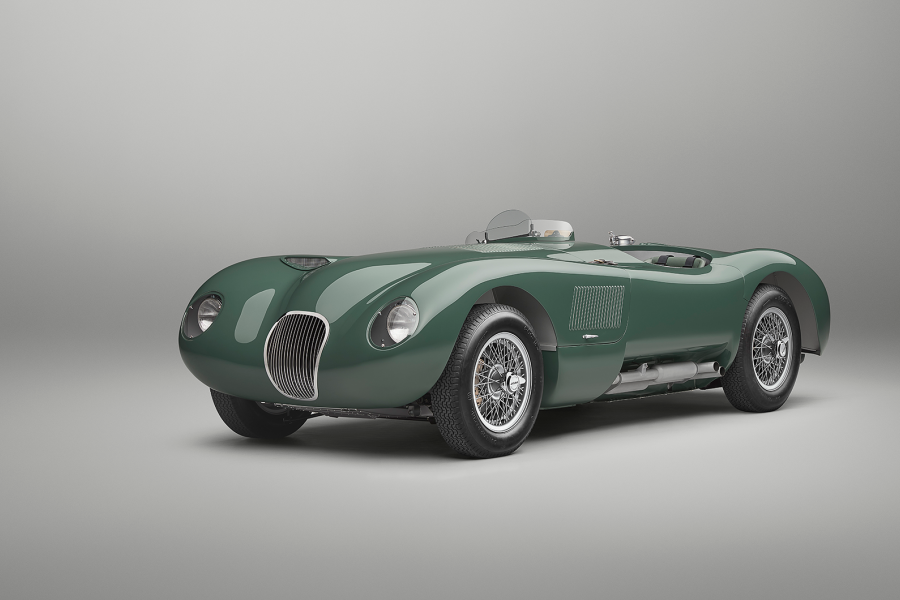 C-type Continuation to debut at Concours of Elegance 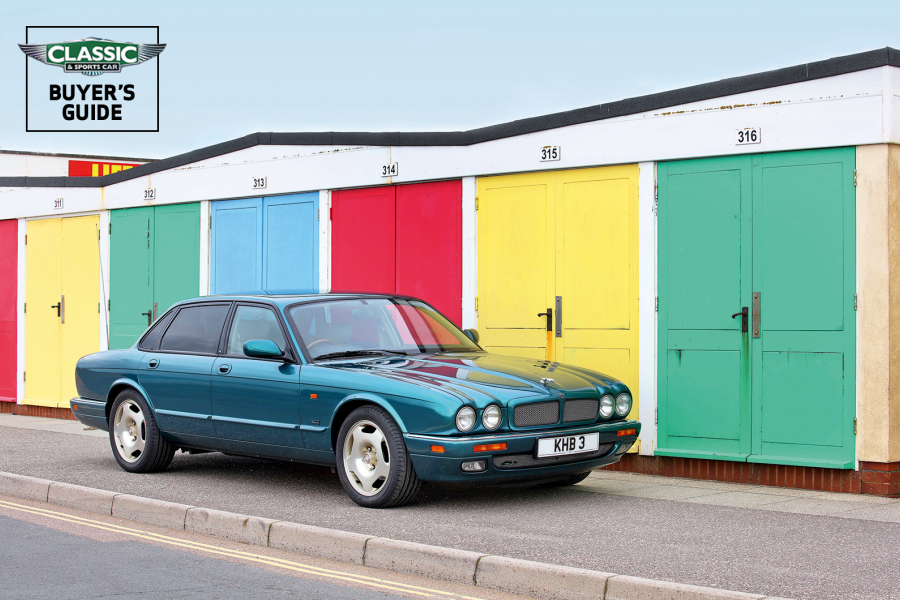 The forgotten allure of the duPont Model G Speedster