Mercedes-Benz W123: some things were built to last 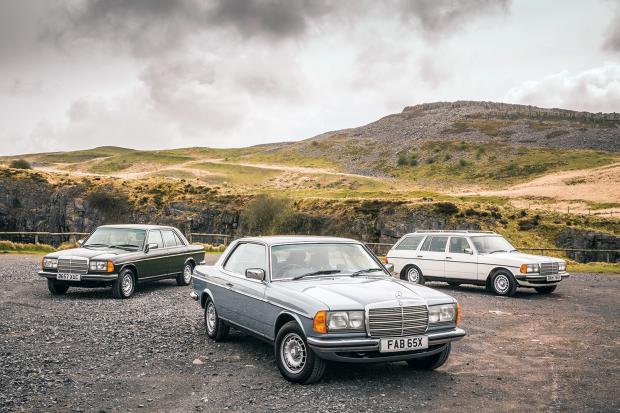 Could a W123 powered by a smooth, punchy twin-cam ‘six’ be the ultimate in classic Mercedes-Benz motoring?

Competence, even excellence, can sometimes scan as ‘boring’ in the world of old cars, and that just about sums up the plight of the Mercedes-Benz 123-series.

Functional, rational, beautifully made and always expensive, the 123s are in many respects the essence of what a Mercedes is, or was; but they were never intended to be ‘exciting’.

The very word suggests a lack of control, a rash and impulsive streak that would not have sat comfortably with the image of absolute respectability Stuttgart still nurtured in the ’70s and ’80s.

These cars were about doing business in the real world. In the sometimes flaky genre of old cars I have occasionally allowed myself to think that the W123 might just be a bit too sensible, reliable and practical to qualify as a ‘true’ classic. 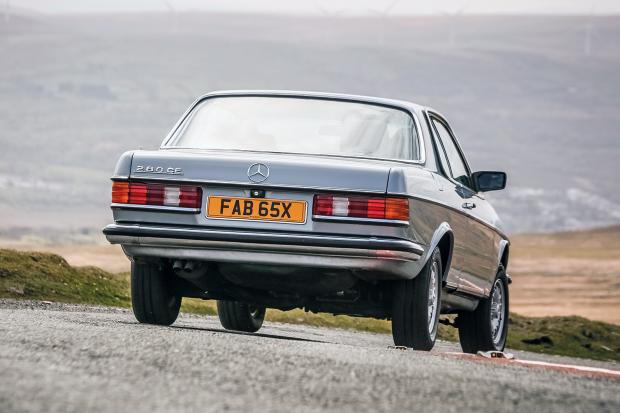 Diesel versions worked for a living in the taxi trade across world; their popularity said everything that needed to be said about the W123’s legendary durability.

Equally wholesome and virtuous were the various four-cylinder petrol-engined variants, the injected 230E giving perhaps the optimum compromise between performance and economy for most people.

For those customers who wished to go faster in their W123s, however, there was always the option of the fuel-injected M110 engine.

This was as exciting as the W123 allowed itself to get: a classic twin-cam straight-six created in the late ’60s to give the W114 ‘new generation’ saloons and coupés (from ’71 onwards) the performance they needed in the face of increasingly strong opposition from the new six-cylinder BMWs. 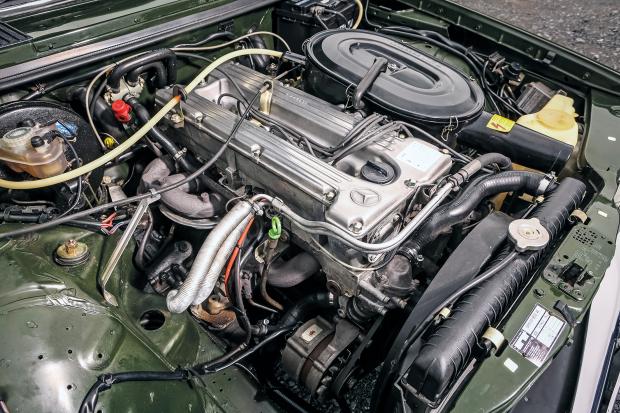 Hefty West German tax on engines of over 2.8 litres kept Stuttgart’s designers focused on extracting as much urge as possible from a relatively small unit, while keeping half an eye on future emissions regulations for the North American market.

Fuel economy – never much better than 20mpg – wasn’t a huge consideration in an £8000 car built for people who did not have to worry about the price of fuel.

Even accounting for the weakness of Sterling at the time, £8k was an extraordinarily stiff price for a 2.8-litre saloon that didn’t even have a rev counter or a radio as standard. You could buy a Jaguar XJ12 for the same money.

Tellingly, of these mid-’70s car makers, only Mercedes was confident enough to fit an odometer that ran to 999,999 miles.

The 280-engined 123s were designed for 100mph (or more) cruising on unrestricted motorways. To make the point, factory brochures showed a world of healthy, square-jawed ’70s Germans in beige flares making ‘responsible’ use of this power through Teutonic pine forests and along deserted, sun-drenched autobahns, enjoying the velour trim and the quad head restraints in a Mercedes that still had an air of quality and superiority, but was somehow less menacing than the cars that had come before it. 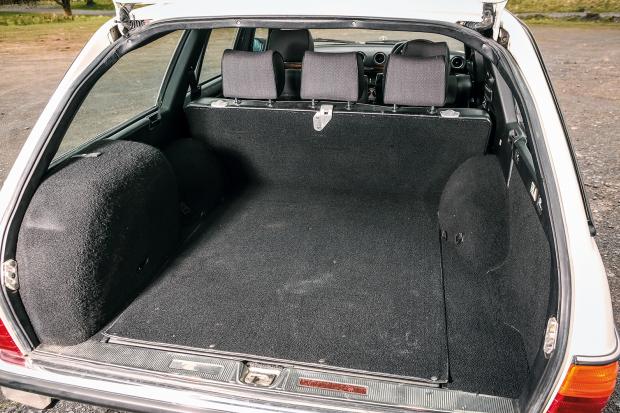 Like everything else about the W123, the M110 straight-six was the product of careful, methodical development rather than revolution: its extensively webbed cast-iron block, with 12 counterbalance weights on a beefy seven-bearing crankshaft, was directly related to the M130 single-cam engine used in the W108 S-Class and Pagoda since 1967, and had a history that could be traced back to the early ’50s.

Where most Mercedes engines tended to look industrial and unromantic, the M110 presented handsomely under the 123’s two-position bonnet, with proud dual cam covers on the aluminium cylinder head.

It also proved enormously versatile, ending its days in the G-Wagen in 1989, having provided service in the SL and SLC sports cars, and two generations of the S-Class saloon.

While Continental buyers could choose from various lower-compression carburetted M110 variants, for the power- and status-hungry British market these top-of-the-range W123s only came with injection, initially Bosch D-Jetronic – with its vacuum sensor and 25-transistor ECU – and later K-Jetronic, a continuous high-pressure system with fuel running at 5bar and delivery controlled by an air-flow meter

Initially rated at 175bhp, power went up to 182bhp in 1978 thanks to a higher compression ratio; there was no advertised difference in output between the D- and K-Jetronic cars.

That figure is weighted massively in favour of the saloons (126,004 cars) but today they are probably the least often seen, if only because the coupés and estates have tended to be cherished. 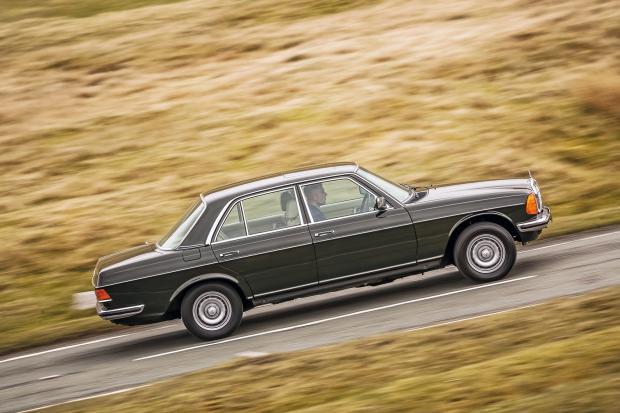 Mark Cosovich’s W123 World did a full bare-shell restoration on this saloon, and with its balanced and blueprinted South African-specification engine it drives ‘as new’ with an authority and assurance that feels contemporary.

Although you do come across the very occasional four- or five-speed manual, the automatic transmission was standard on British 280s, and all the cars pictured have it.

The later four-speed automatic in the saloon is more responsive, with its part-throttle kickdown, but the M110 engines were designed to produce real power from 3000rpm for high-speed overtaking rather than low-speed rubber-burning.

It pulls away in second for smoothness (unless you hold it in ‘low’) and this, combined with the big steering wheel, tends to give the car a slightly ponderous flavour, particularly if you’ve just come from a modern.

As with the hard seats (for good posture) and the huge steering wheel, it was very much a case of ‘Stuttgart knows best’ rather than pandering to fashions or buyers’ whims. Push harder, and the lusty sound and smooth feel of the M110 when revved ambitiously goes some way to backing up Cosovich’s assertion that the 280E was “a true sports saloon”. 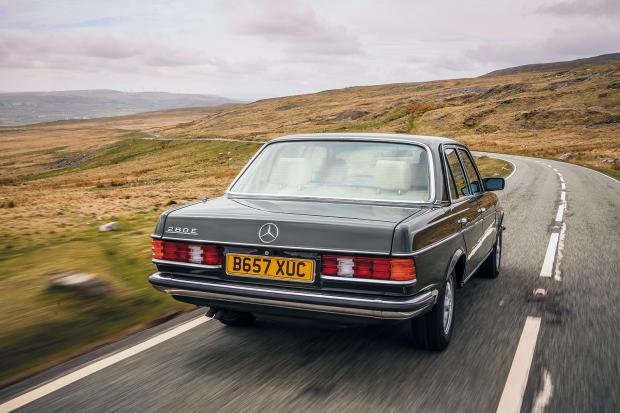 Today, the estates (TEs) are the most sought-after variants, with the coupés (CEs) coming a close second.

In terms of driving they are, naturally, much the same as the saloon, except that the coupé (with its 2in-lower roofline) feels cosier, and the estate, with its complicated self-levelling rear suspension, has the smoothest ride.

All versions are impervious to rough or careless driving, but these are not cars to tease out your aggressive instincts.

In some ways the coupé had the hardest job of all, because it was so obviously less car for more money, and arguably not as attractive as the model it replaced.

It was promoted as the car for the empty-nest, affluent couple who no longer needed four seats, while the estate was for the ‘lifestyle’ family (before the term became so nauseating) who were still procreating: with its optional third row of rear-facing seats and chrome roof bars, this was the best and sexiest estate car in the world.

These wagons were a new product for Mercedes, which had studiously ignored the growing estate-car market for decades.

They quickly became the most sought-after station wagons for sale when production began at the Bremen factory in 1978. They were so successful in Germany that, for a while, it looked as if they might not even be built in right-hand drive. 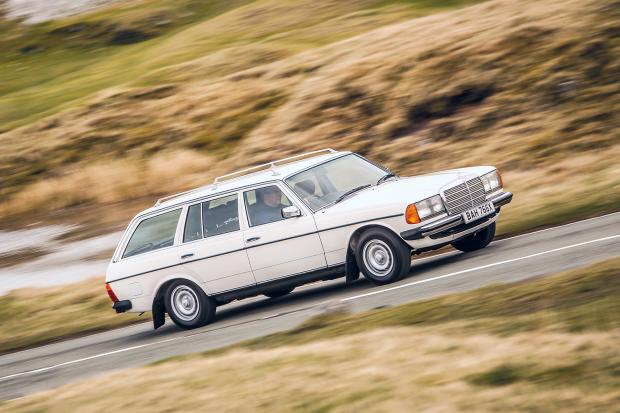 When they did arrive in the UK in 1979, not even a £13k price-tag could dissuade buyers. Its stylish profile, and superb utility and practicality, changed expectations of what an estate could be.

They became fashion items and something akin to family heirlooms, such was buyers’ affection for a wagon that seemed impossible to replace.

This white 1982 280TE was previously owned by Barry Gibb of the Bee Gees (quite a few TEs had celebrity first owners).

These big-engined 123 wagons were cheap and abundant when I was still buying them 10 years ago: today they’re few and far between and most, says Cosovich, need a full restoration.

This was never cheap and is made more difficult these days because certain parts are becoming either hard or impossible to source from Mercedes-Benz, or else prohibitively expensive. 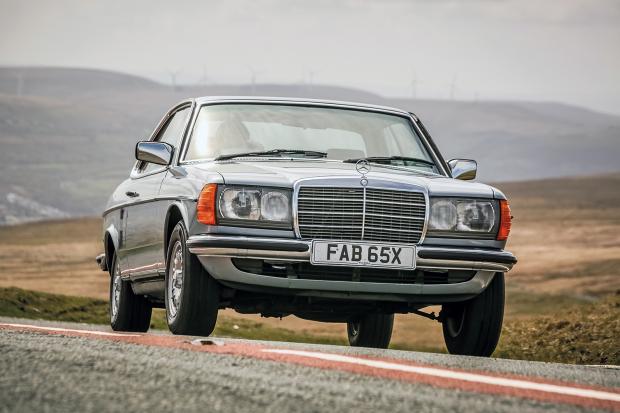 Much the same can be said of the coupés, which are blighted by even greater parts problems because so many items are specific to this two-door body: even the fuel-filler door is different to the saloon’s.

A really excellent 280CE such as Andrea and Steven Prevett’s 1981 car (never used in the rain by its previous two owners) would command over £20k now; it’d be more than twice that to restore a project car.

The good survival of the 123s compared to their flimsy ’70s and ’80s rivals proves the case for Mercedes’ build quality.

In the context of the mid-1970s, it would be hard to find a range of passenger cars with better power steering, stronger brakes (ABS was available towards the end) or a significantly better ride.

Four decades on they still feel fast cars, if not thrillingly so, and are comfortable but don’t set out to pamper you. 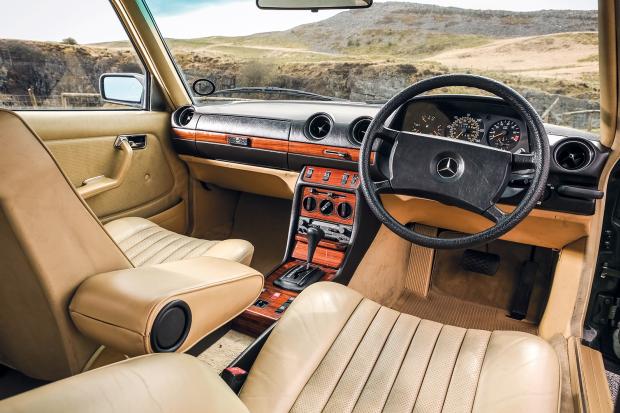 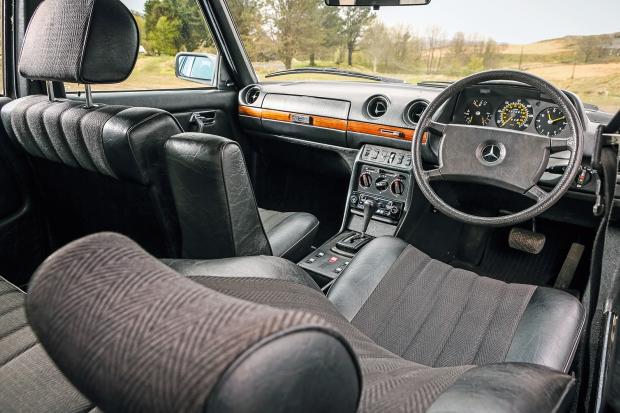 To own a W123 is to make an investment in safety, reliability and superb build quality, secure in the knowledge that you’re driving a product of the largest research and development budget in the world, from a firm that was at the top of its game.

I can only explain it as a certain feeling of solidity that you either buy into or you don’t.

For model guru Cosovich, these qualities make the W123 a kind of religious calling as much as car. For me it is a case of total respect rather than blind devotion.

As a young dad, 20 years ago, the 280TEs first made a believer out of me; my children were brought up in them.

Today, having gone through various Pagodas, 6.9s and other three-pointed-star exotica, I still might choose a 280TE over any of them.

The M123 engine, the only all-new power unit in the W123 line-up in 1976, is proof that even Mercedes can get it wrong occasionally. There had, of course, been single-cam six-cylinder versions of the previous W114 ‘new generation’ models (the 230/6 and 250).

The new M123 was a development of the M180 ‘six’ from the 250 (confusingly, 2778cc) for customers in some markets that didn’t have the infrastructure to repair and service fuel injection, but still wanted straight-six refinement.

Four main bearings were deemed adequate (but with nine bobweights on the crank to help smooth things out), while the internal drives for the oil and fuel pumps and distributor linked it to the M180.

The main differences related to the equally spaced cylinders in the block (as opposed to paired) and the fact that the M123 used a complex dual-downdraught Solex carburettor, which had a vacuum cell that kicked in beyond ¾ throttle according to load and engine speed. The idea was economy from leaner running but, without proper attention, burnt valves were not unheard of if the Solex was allowed to go out of tune.

Giving 127bhp (later 138bhp), it was a pleasingly smooth engine when set up properly that would take saloon and estate W123s to over 100mph, but was never more economical than the twin-cam.

The M123 engine (which became fairly irrelevant in the mainstream range once the 230E four-pot arrived in 1980) ended its days powering the long-wheelbase airport taxis and ambulance chassis.

The SL that came in from the cold 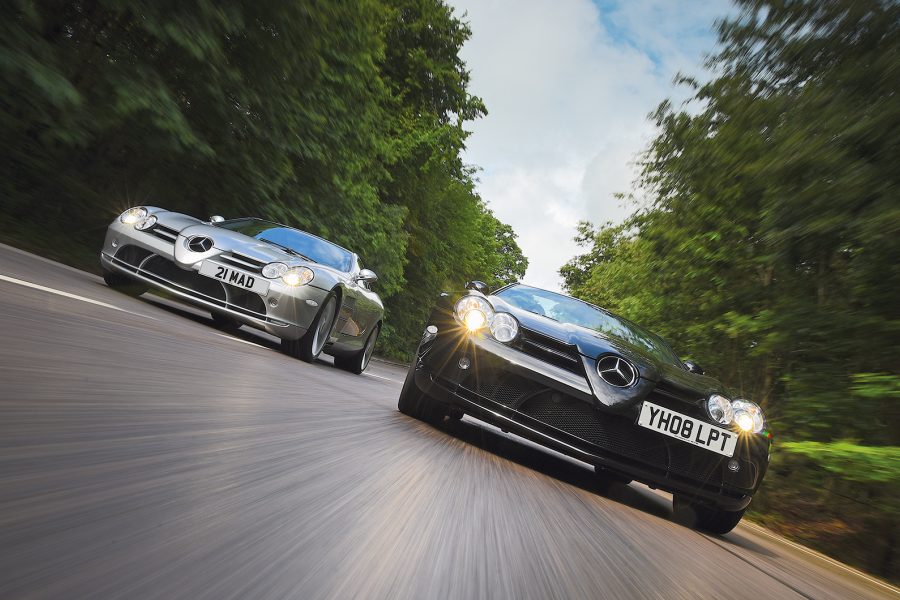 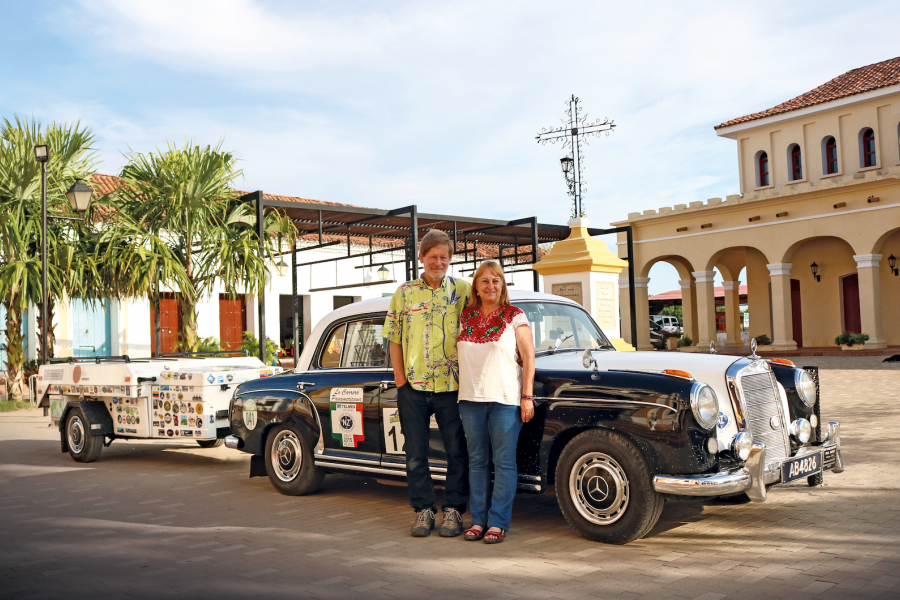 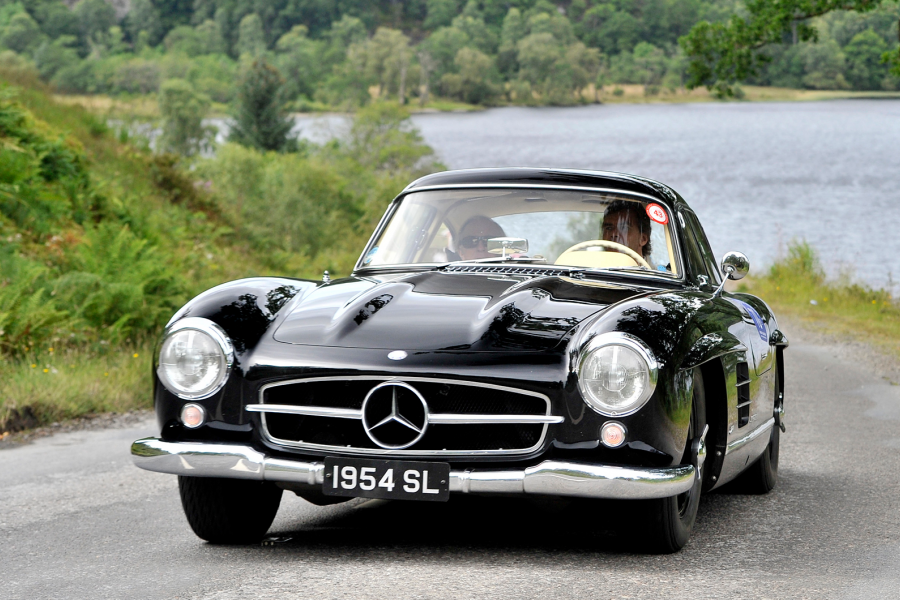 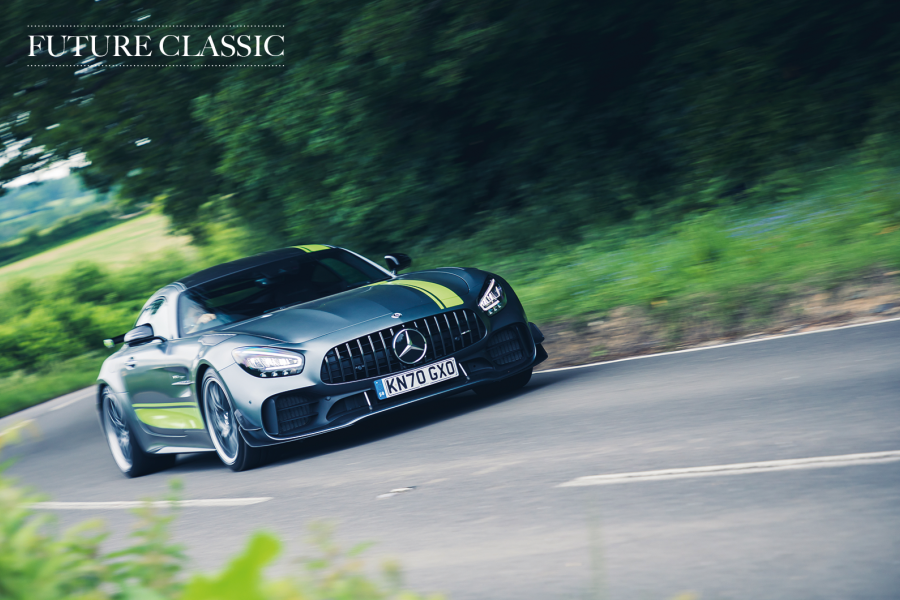