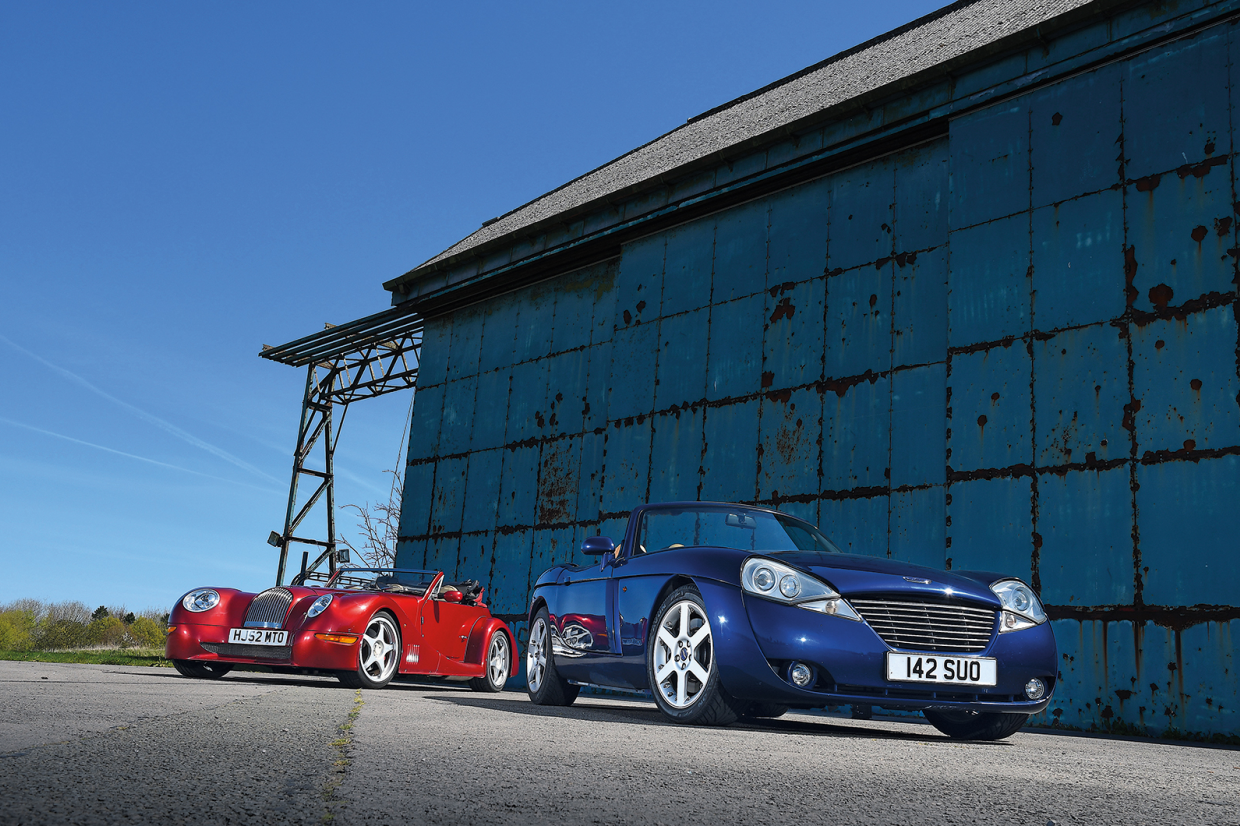 Make a quick referral to your grey matter, and you’ll probably find Morgan in the ‘Sports Cars’ folder, with Jensen filed in ‘Tourers (mostly grand)’.

A generalisation? Perhaps. However, today we appear to have an open-top Morgan grand tourer and a Jensen sports car.

Both the Aero 8 and S-V8 made similar performance claims from their respective V8s; both were originally priced in the £40,000s; and both were conceived in the 1990s. This was a decade of many a revival – some successful, others less so.

It was also a period when established marques flourished. 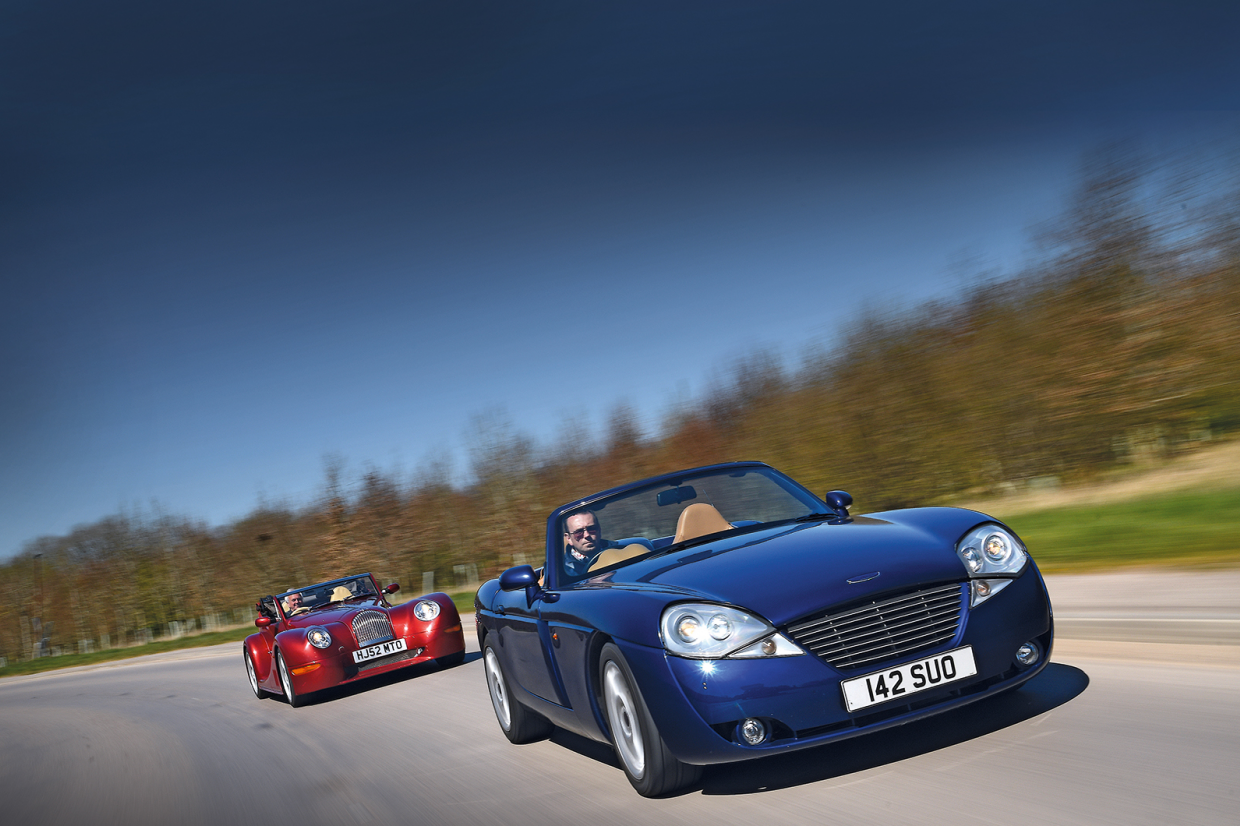 Shades of a revivalist 541R to the nose of the Jensen, while Morgan’s large front wings form a distinctive ‘face’

It even looked as if Britain’s last mainstream manufacturer, Rover Group, was about to make the most unthinkable of comebacks as its range grew and, for the first time in decades, it fielded genuine contenders for class honours.

Spurred on, or perhaps niggled, by the success of the Mazda MX-5, the British motor industry rallied to the cause of saving its most endangered of indigenous motoring species: the sports car.

Rather than nodding to the Jensen-Healey, the S-V8 appears to take its cues from the Austin-Healey 100. There’s that distinctive front grille, the profile, and the works-style wing vents.

The body colour runs into the cabin, flowing over the top of the doors and around the dash, and even the main four-dial binnacle brings to mind the glorious minimalism of the original ‘Squealie’, albeit this one houses a 170mph speedo and a rev counter with a 7000rpm redline. 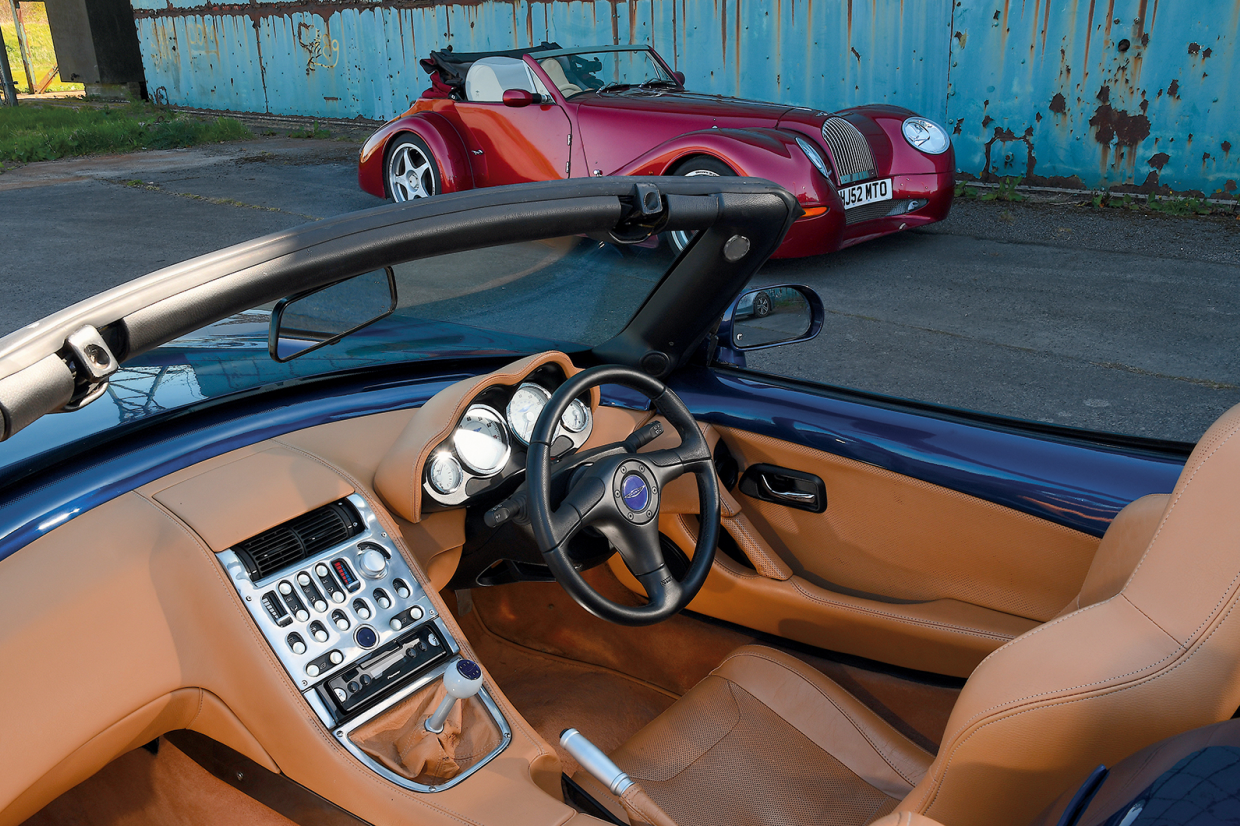 There is a reason for these similarities: originally this car was to have been a Healey. But Plan A didn’t work out.

Encouraged by the success of its work on the Plymouth Prowler’s tooling, Creative Manufacturing Systems decided to produce its own sports car in 1998.

Designed by Howard Guy and Gary Doy, the S-V8 started life as Project Rio, a traditional roadster based on a steel monocoque shell wearing aluminium panels and powered by a GM engine.

Customer feedback desired more power than the 208bhp V6 could muster, so Project Rio became Project Vulcan, powered by Ford’s Triton 4.6-litre V8. After generating much excitement at British motor shows in 1998 and 1999, and garnering 300 deposits, a fixed-head variant – the C-V8 – was unveiled in 2000.

The S-V8 was finally launched a year later, and with it a new factory in Speke on Merseyside, making Jensen look set for a Lazarus-style return to the UK market. 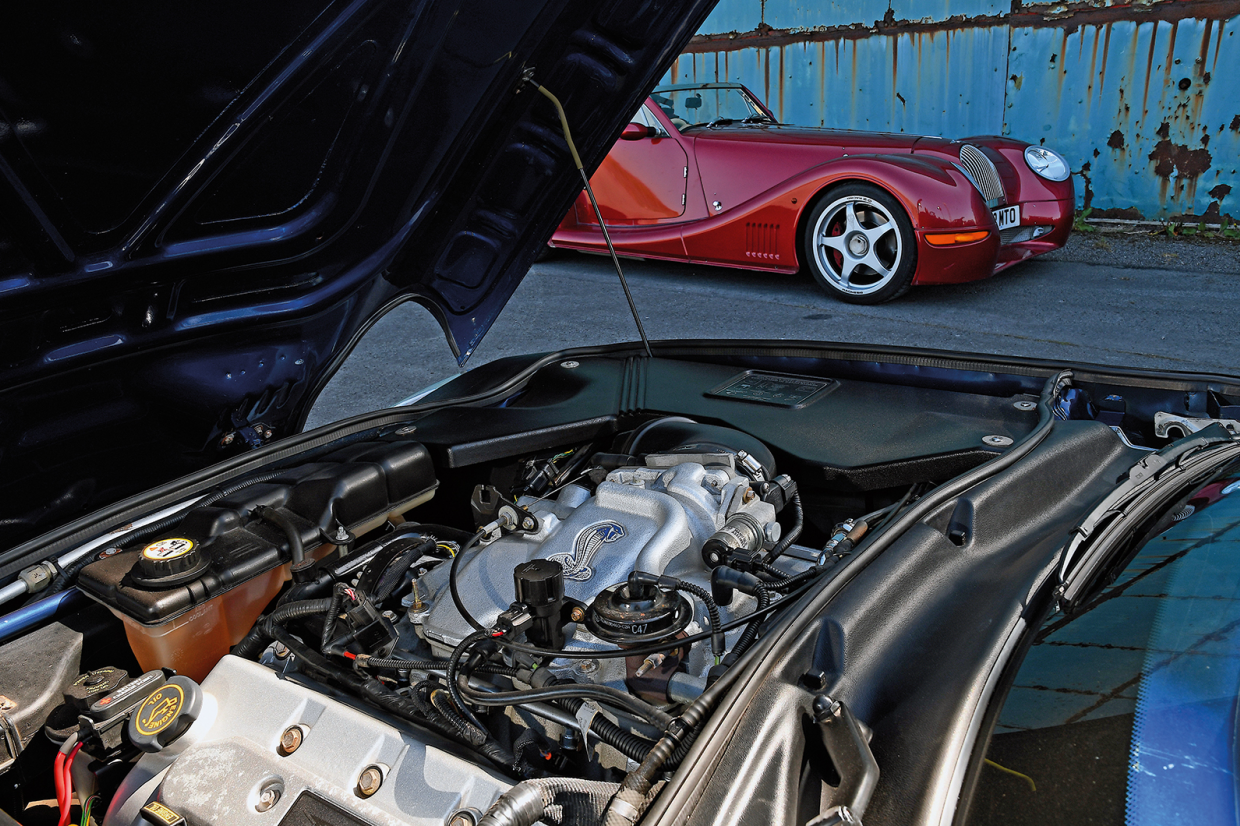 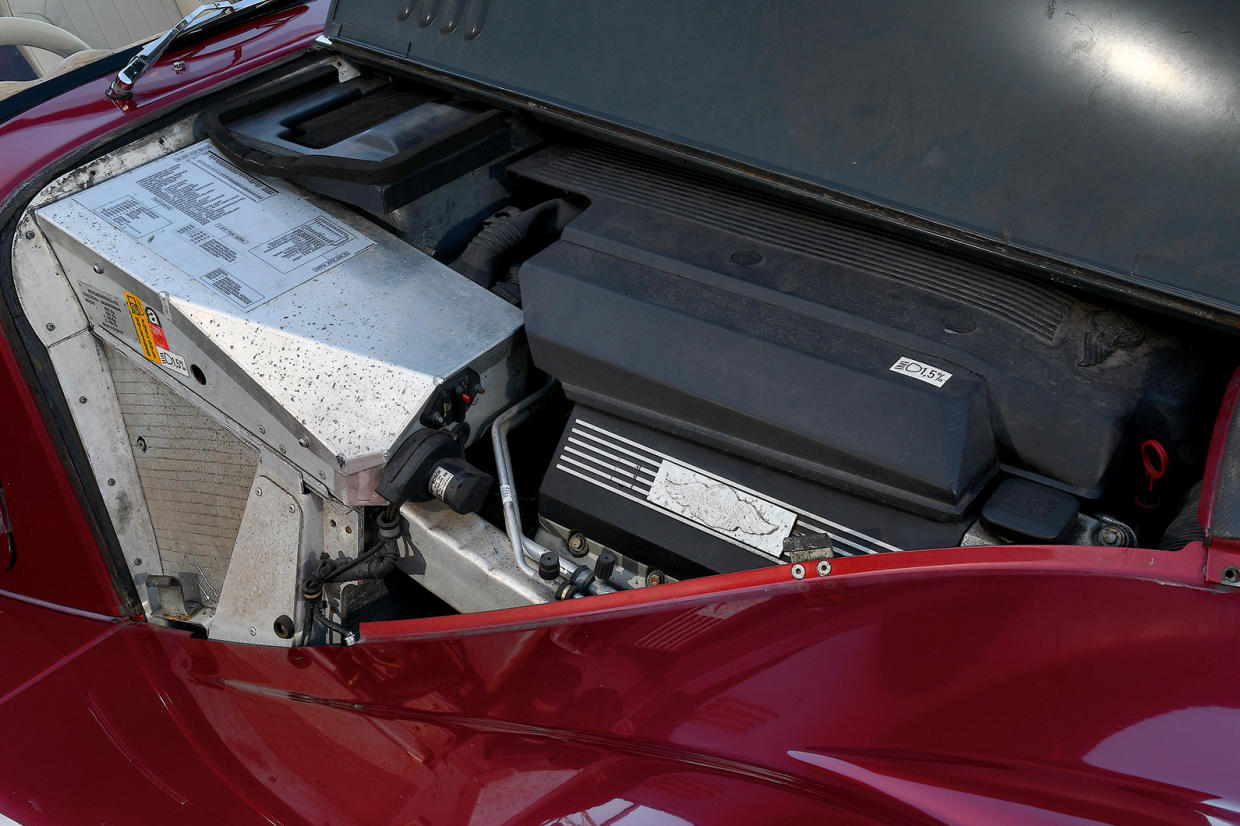 Yet just when all the faults had been rectified, cars were beginning to be delivered and the new Liverpool factory was about to break even (producing three cars per week), the project ran out of money. In mid-2002 the backers pulled out after just 23 production cars had been built, when it was realised that £9m was not enough to fund a clean-sheet sports car.

The remaining cars and parts were sold to SV Automotive, which built somewhere between eight and 10 further S-V8s, but that really was the end. Sadly, the whole project was blighted by familiar problems with leadership, quality, funds and skilled labour.

Thankfully, no such problems existed at Morgan’s long-established Malvern plant. It is tempting to view the Aero 8 as the first ‘new’ Morgan since the 1963 +4 Plus, but that isn’t quite accurate.

That was really the same old favourite wearing a new, unfamiliar glassfibre outfit. To find the previous truly new Morgan chassis, you have to disappear even further down time’s cobweb-strewn tunnel to the 1936 4/4. If anything, the oddly proportioned +4 Plus sounded and felt far cruder than its established sister.

Come 2000, though, and Morgan would not make the same error again. Indeed, the new Aero 8 was the direct opposite of the approach taken with the +4 Plus. This time the body would be unmistakably Morgan, but the dynamics would be far more sophisticated and cutting-edge – broadening the marque’s appeal. 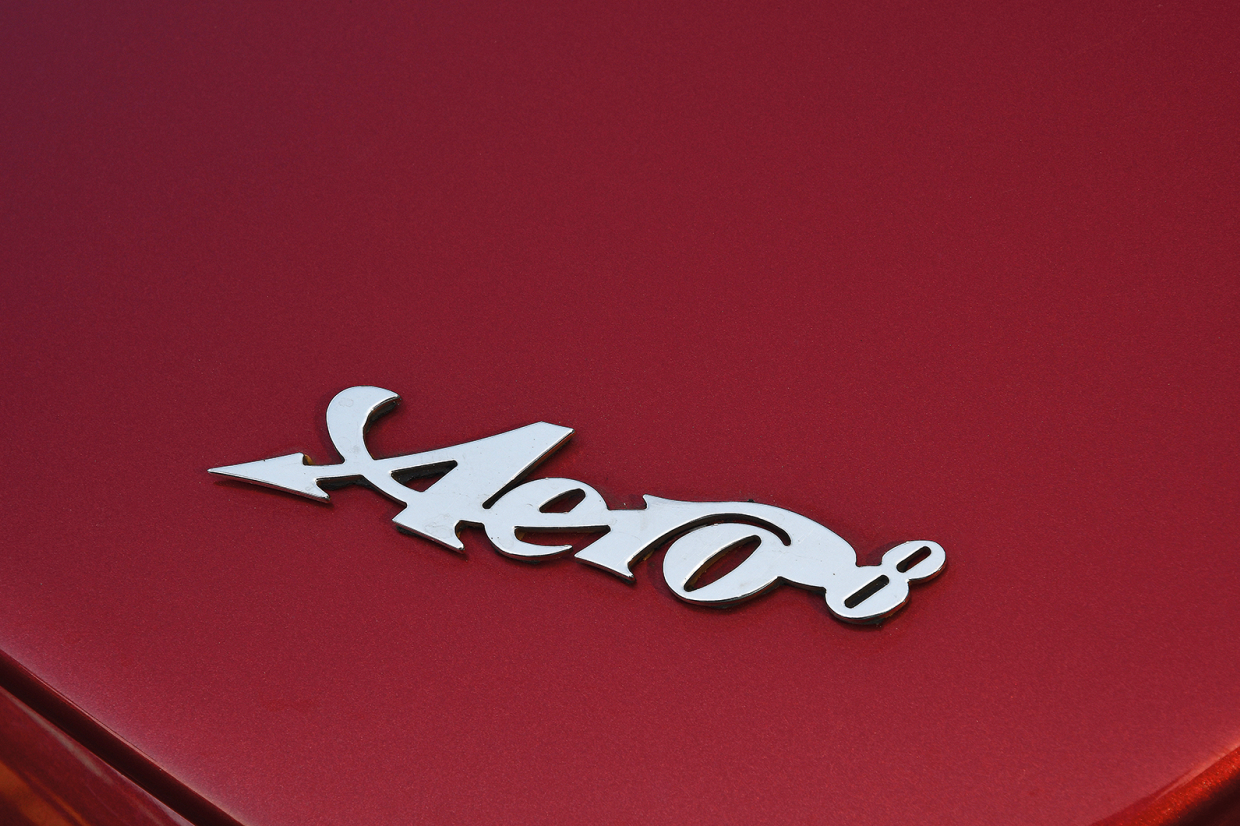 The roots of the Aero 8 can be traced to a new chassis for Charles Morgan’s +8 racer, which was first campaigned in 1996.

The Aero 8 was developed with Chris Lawrence and Morgan engineers with help from sheet-metal fabrication specialist Radshape. Its bonded, flat-floored aluminium chassis was independently suspended by double wishbones inspired by single-seater racing-car design – not least its inboard front coilovers and cantilevered top wishbones.

The ash-framed body, a clever update of Morgan cues, was the work of Lawrence and Charles himself, and its aluminium panels were made by Superform. The V8 power came not from Rover but BMW’s 286bhp 4.4-litre M62, which drove the rear wheels via a six-speed manual ’box.

The Morgan was warmly greeted when launched – well, apart from many comments about its cross-eyed you-know-what, which are still levelled at it today.

These were addressed in subsequent Aero 8 series, which ran successfully through five generations until 2018, by which time the model’s chassis was moonlighting by underpinning different variants from fixed-heads to the resurrected +8. Morgan’s rolling chassis even went on to provide the bones ’n’ guts for the stillborn Bristol Bullet of 2015. 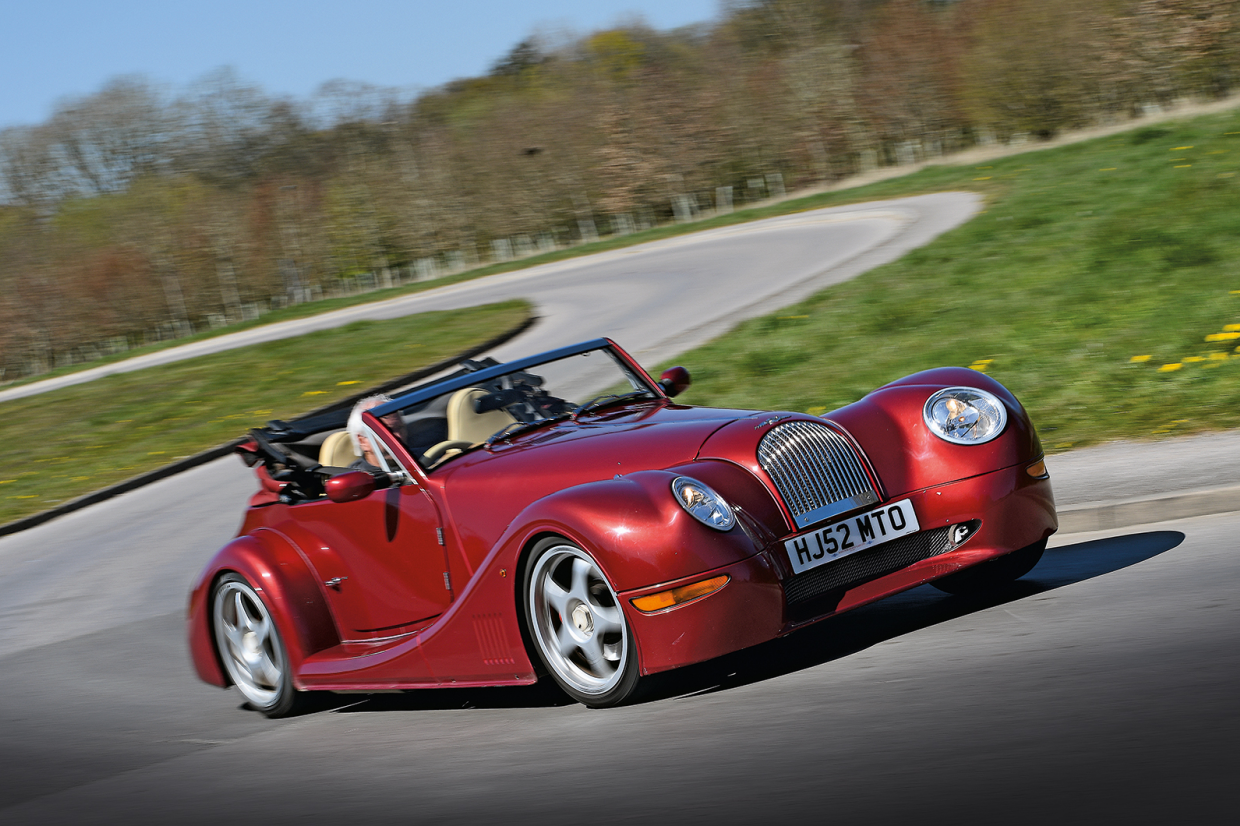 The Aero 8 turned heads on launch with its distinctive design

Long-term Jensen enthusiast Alan Robson’s S-V8 is the sixth car built, and comes with just one previous owner and 4000 miles on the clock.

The attractive cabin is roomy, the driving position comfortable, with enough space around the top-hinged pedals for a clutch-foot rest, and the cabin is liberally scattered with Ford Motor Company-sourced components.

However, the most enjoyable Blue Oval part lies under the clamshell bonnet: the 4.6-litre V8. It’s far more extrovert than it seemed when new. The throttle is sharp and it thumps out 320lb ft at 4800rpm on its way to 325bhp at 6000rpm. Its funky Motown vocals start to warm up at 3000rpm, before delighting by whoopin’, hollerin’ and bouncing off passing walls at 4000rpm and above.

The V8 is responsive and has plenty of muscle, and the slick five-speed gearchange is more than happy working up and down through its well-spaced ratios. And if trouble wanders into view, then the effective disc brakes can be relied upon to intervene. 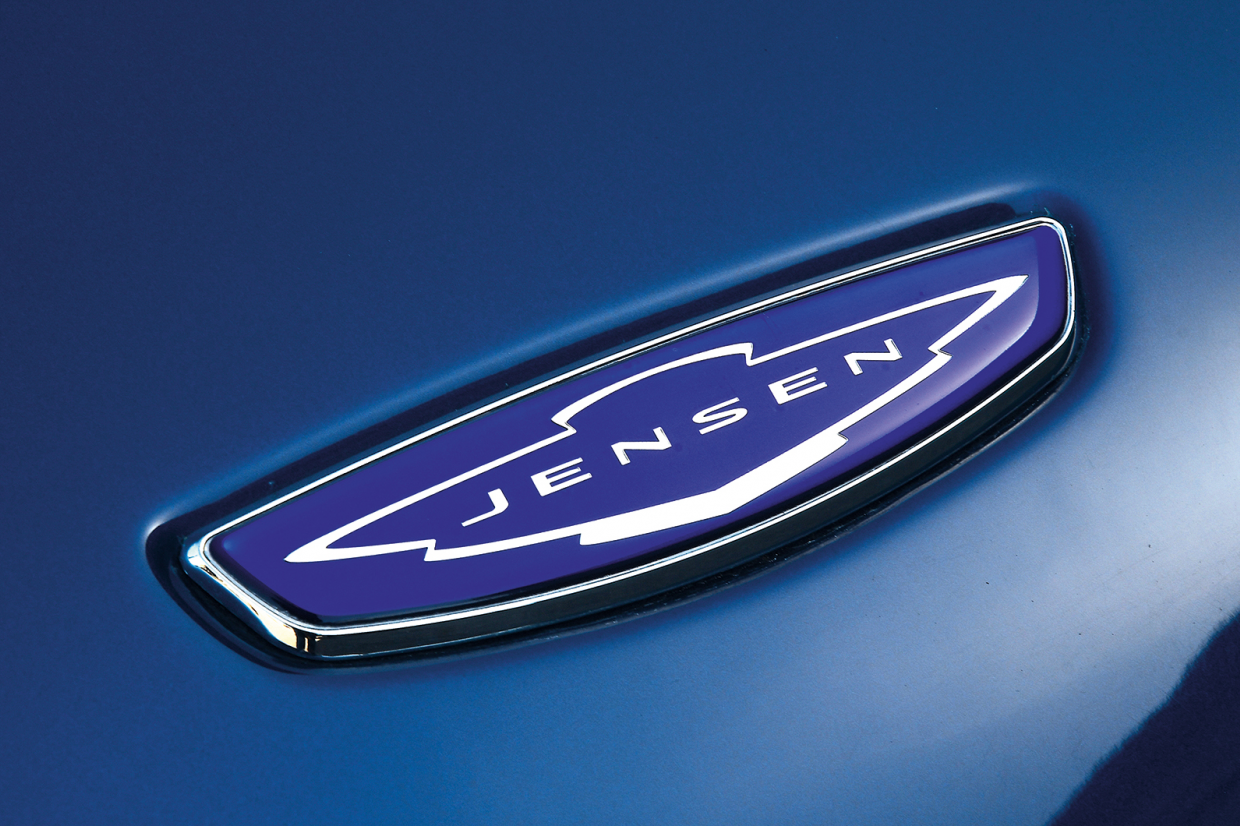 The Jensen certainly feels solid; there is little if any shudder evident through the steering column or the seat. The only thing that lets it down in this respect is the sight of the bonnet’s shivering dance, which gives it a touch of the TVRs.

At speeds it is noisy, from both the sassy exhaust and the wind buffeting, and there’s quite a bit of heat-soak in the footwell.

But this is a sports car from the old school: to complain about a lack of refinement is to miss the point entirely. Its primary ride is fine, roll is controlled and the front responds eagerly to the quick and feelsome steering.

It’s only when you’re really travelling through bends and esses that you sense the rear axle might be up to some Machiavellian scheming. Push too hard and oversteer will pounce, yet such is the straightforward Jensen’s honest, analogue nature that its limits are always clearly demarcated. This car really is a delight. 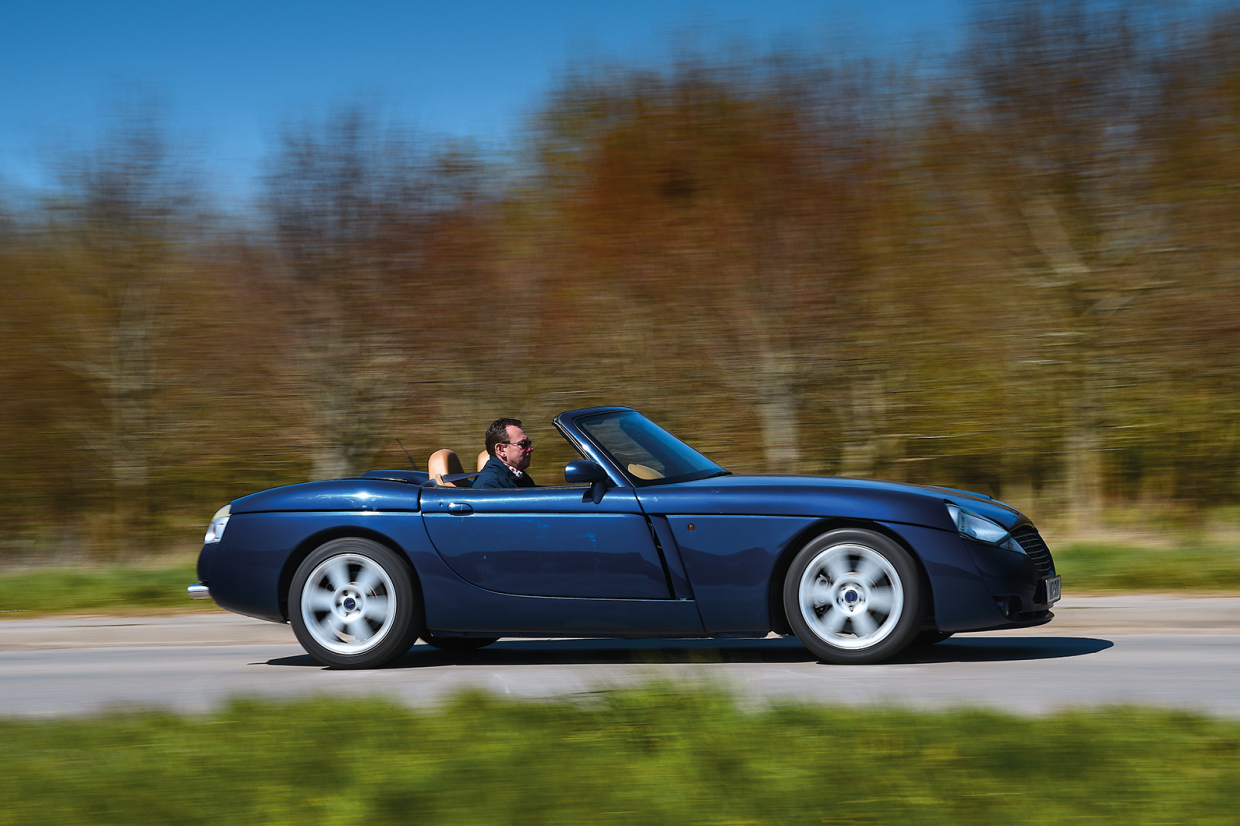 The Jensen is a delightful modern classic

Aero 8 keeper Hugh Reader’s 40,000-mile example was the realisation of a long-held desire to own a Morgan. And, having had sports cars since the age of 19, starting with Frogeye Sprites, he has few qualms about using it all year round.

Drop into the cabin and as soon as your pelvis lands in the bucket seat – with the certainty of a tenon mating with its mortise – doubts surface about its GT pretensions.

The seating position is low, the door sides are high and the rear-view mirror is full of folded hood. The pedals are floor-hinged and the steering wheel is fairly close.

The dashboard is an Art Deco cocktail of design and materials, with white-faced instruments, engine-turned metal and timber. Again the effect is somewhat gatecrashed by the odd proprietary part or three of Bavarian plastic. 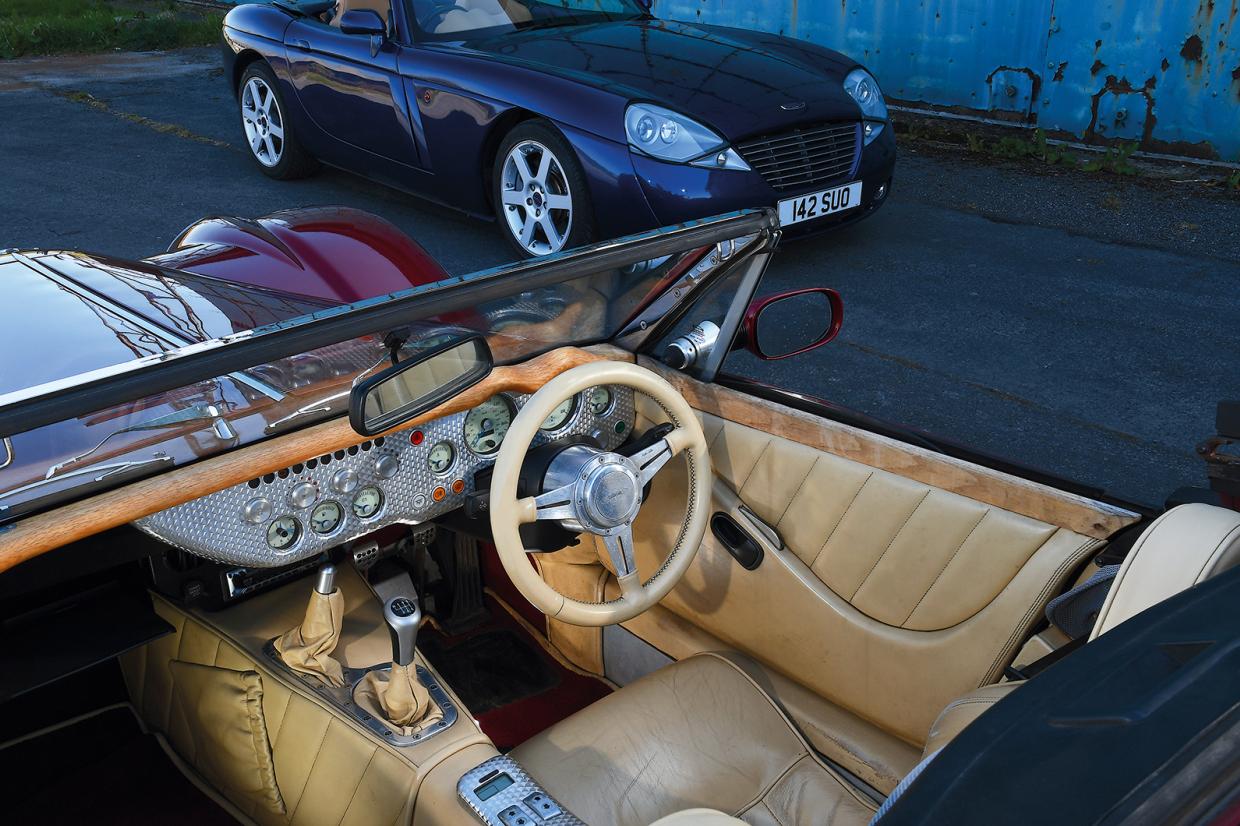 The Morgan’s cabin is similarly minimalist to the Jensen’s

Through twisting complexes, the Morgan shines. Yes, the Jensen’s steering is sharp and its front end responds waspishly, but at higher speeds the tail feels as if it’s struggling to stay focused.

Not so the Morgan, which has a quick-witted front end that changes direction on demand – and at speeds that are verging on the guilt-ridden. Quicker than even the Jensen, the slightest turn of the Moto-Lita wheel prompts the nose to respond, combined with hardly any suggestion of roll.

The rear is both trustworthy and deliciously neutral, all served up without a single bar of anti-roll ironmongery. Witchcraft. Like in the Jensen, there are no signs of scuttle shake or torsional rigidity issues in the eight-pot 21st-century Morgan.

Ride quality was a criticism of the first-series Aero 8s – it is certainly firmer than the Jensen’s, though without skittishness – but then disapproval was levelled at later 8s for their increased roll.

Clearly, said critics have never been bruised by a +8 because in comparison it is fine, and a price worth paying for a chassis with such swift, well-calibrated responses. Sitting on such a dependable platform means the Aero 8 can fully exploit its glorious BMW drivetrain. 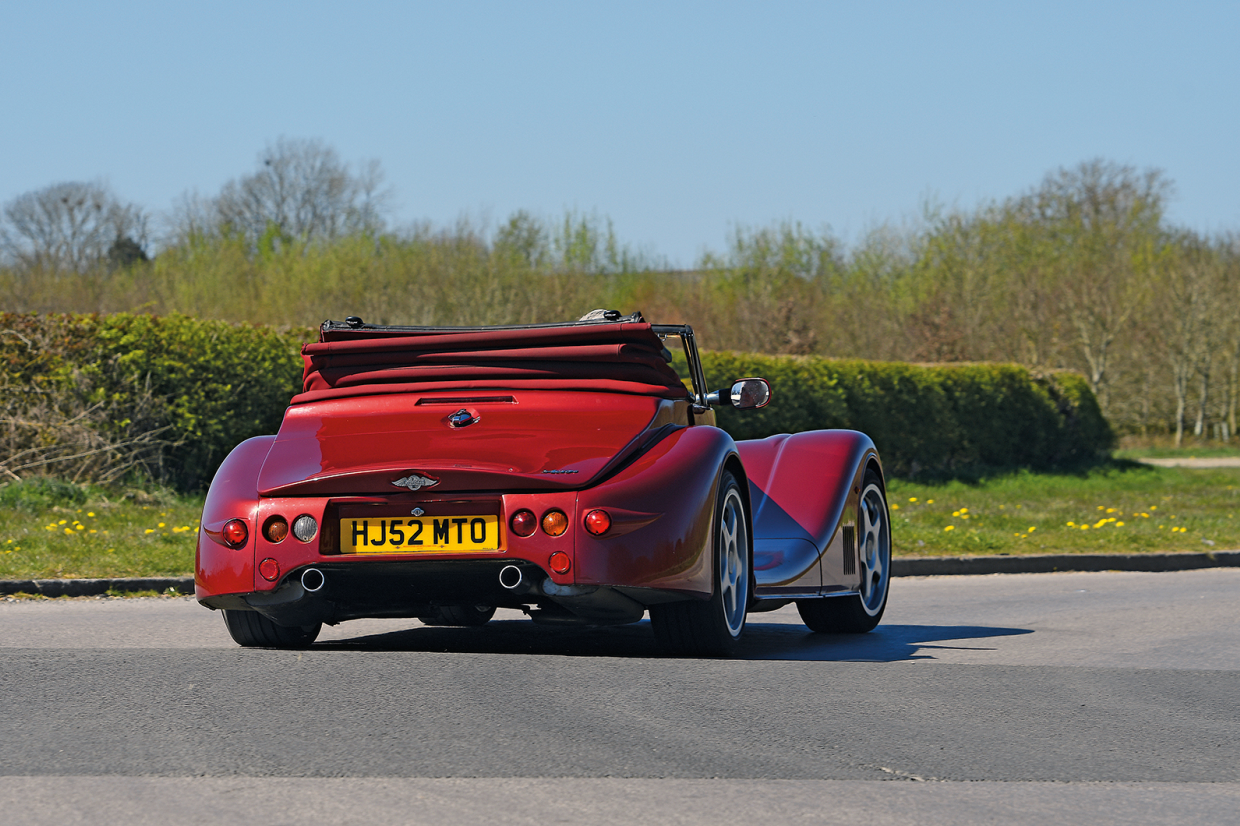 The Morgan is a well-balanced and responsive sports car

The clutch is far heavier than the S-V8’s, plus the brake pedal and throttle travel are longer, but the gearchange is a revelation. Manual BMW gearboxes can have a slightly unpleasant springy, crunchy feel when changing ratios, but not so here: it’s clean and positive, allowing you to truly work the 4.4-litre V8.

On paper its 322lb ft at 3750rpm is up on the Jensen, while its 286bhp at 5500rpm is down, but the overriding impression is that the BMW’s poke is further up the rev range. Certainly the Bavarian unit only starts to truly sing as it passes 3500rpm and approaches 4000rpm, but the effect is more Strauss than Spector’s Wall of Sound.

The result, when applied to country roads, is that the Morgan feels faster. Aurally the Aero 8 is less showy, with a quieter exhaust note and suffering less from wind roar. It is also cooler and more refined: this was the first Morgan to enjoy development time in a newfangled wind tunnel. 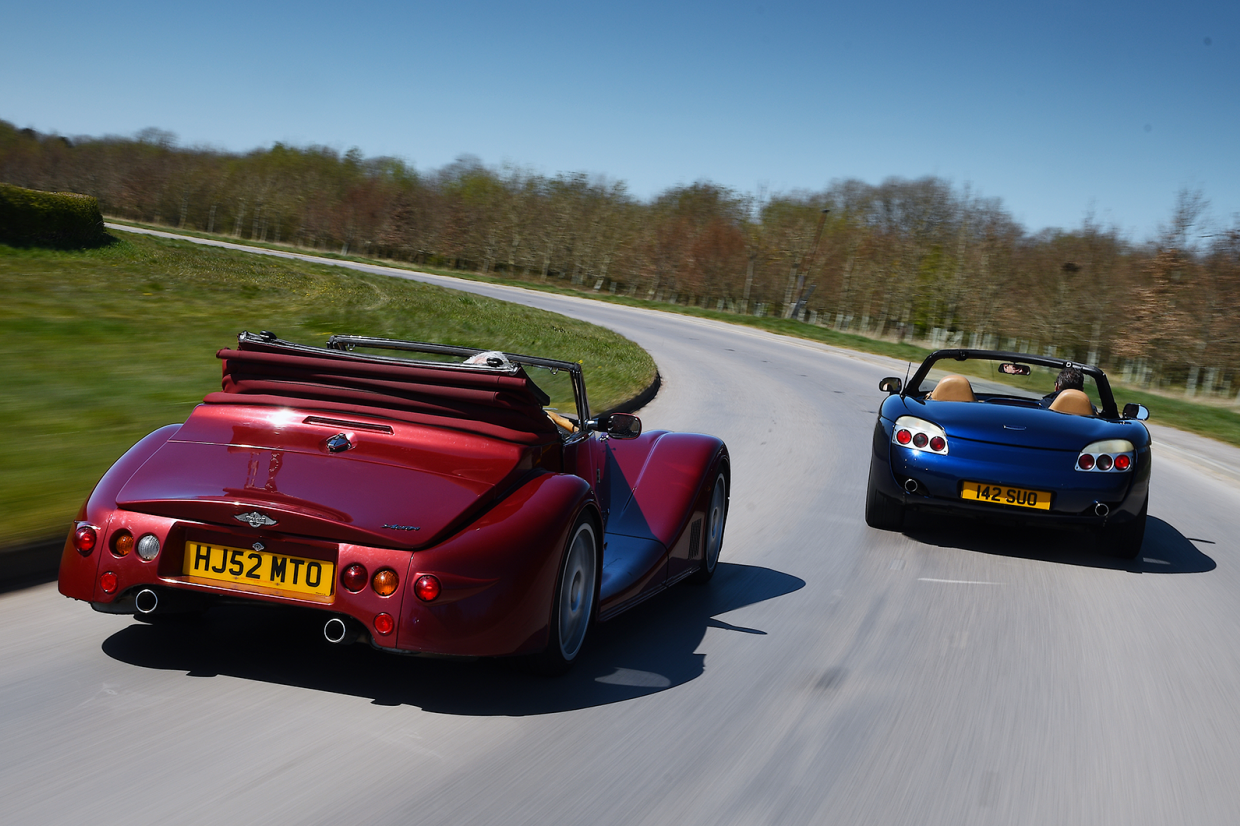 Cogitating aside, these are charismatic reminders of what appears to have been the British sports car’s final era.

The Jensen deserved a longer life and a larger audience. The Aero 8 is better built than the S-V8, but had Jensen production continued, perhaps this would have changed for the better.

Where the S-V8 bewilders Porsche drivers, the Morgan garners smiles and waves from bystanders. The Malvern car is an attractive design that manages to be a successful update of the familiar – and almost beyond criticism.

Yet beneath its classic lines is an impressive sports car that is both full of character and highly adept at gobbling up the miles.

The unique Morgan 4/4 that came out the shadows

A missed opportunity? This is the only Jensen C-V8 convertible

E-type vs DB6: which is the ultimate British sports car?