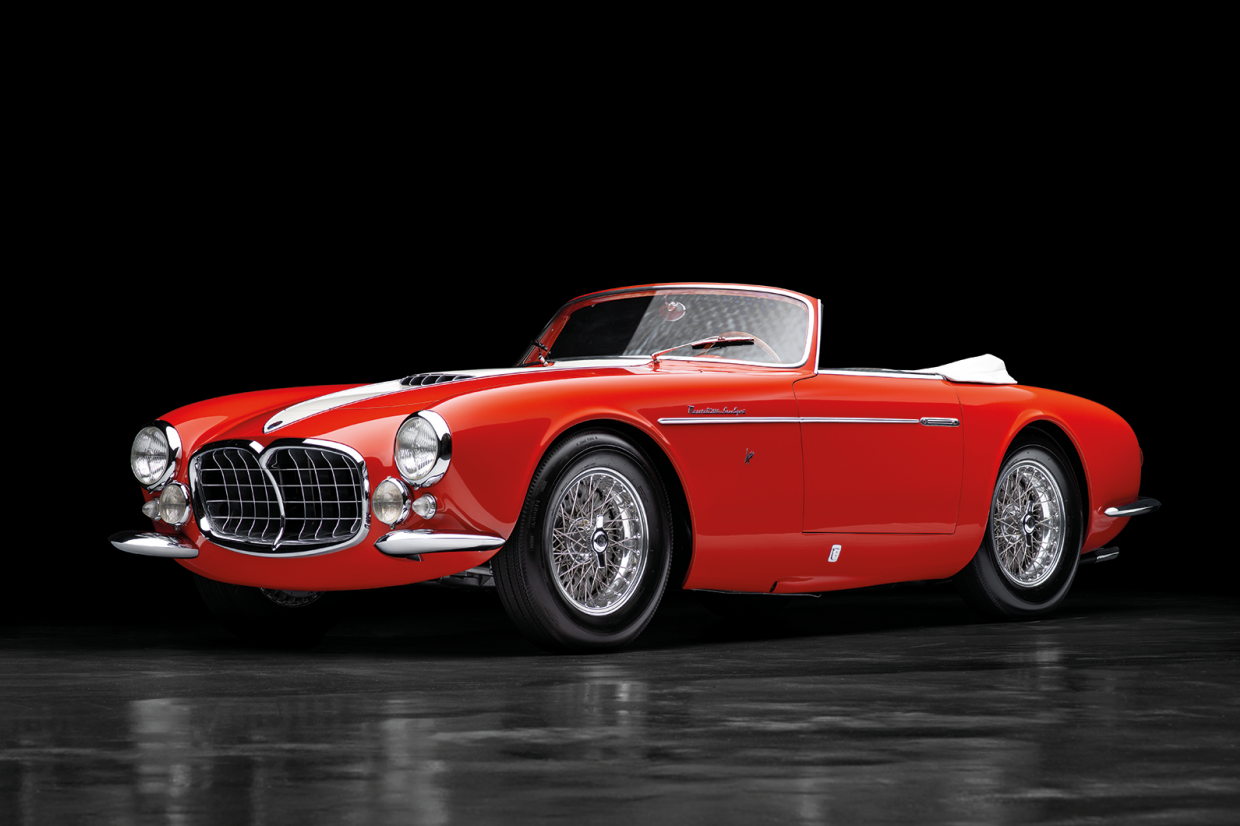 For the Latin playboy in the 1950s, a bespoke coupé was usually the preferred choice for chic motoring; no element of his debonair style could be ruffled, as long as he could stay cool in the summer heat.

Open cars were for motorsport or California export, often instigated by clever dealers such as leading light John von Neumann.

Maserati had primarily focused on racing, but after the war it needed to find further income so began offering detuned, coachbuilt road cars, starting with the A6-1500G T.

Yet somehow these early street machines didn’t encapsulate the soul of the Trident. 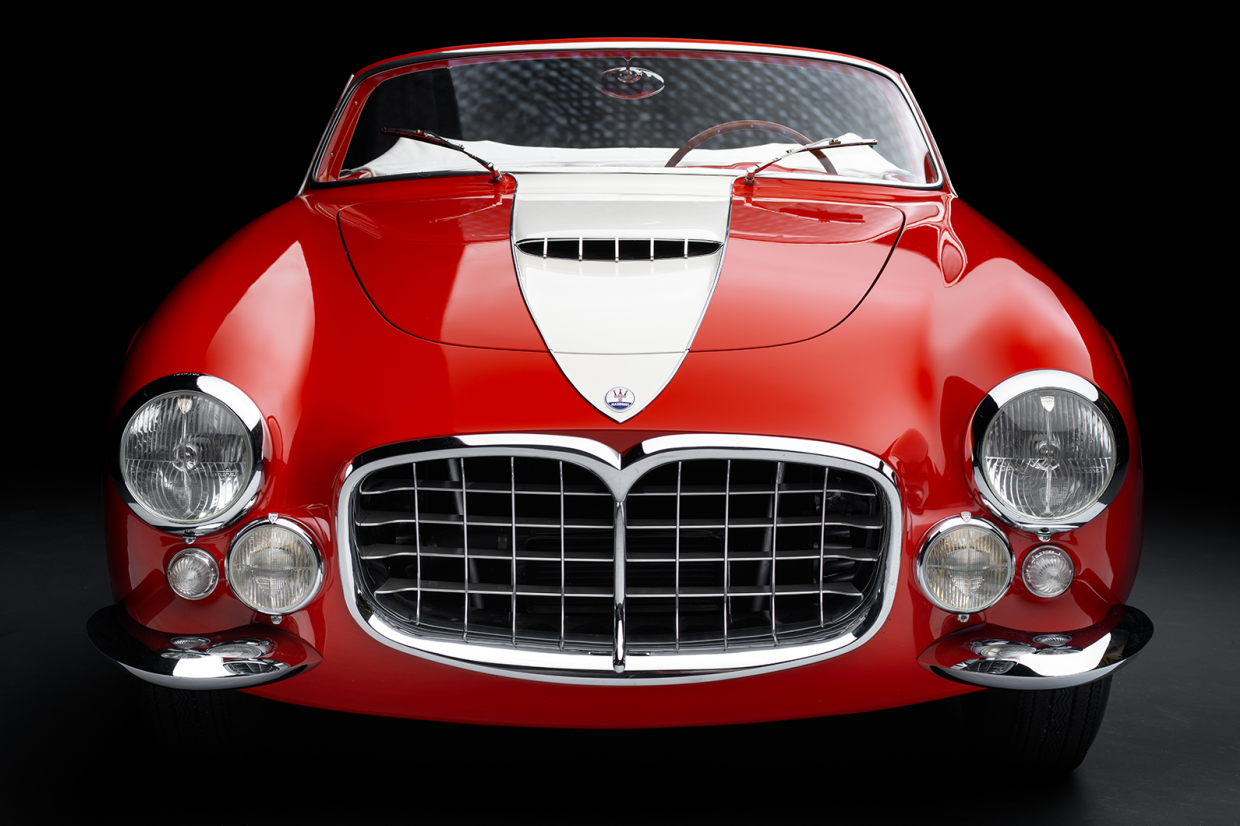 Aided by the addition of the great engineer Gioacchino Colombo to the design team, the specification and performance improved hand-in-hand with racing developments.

In 1953, along with a new 2-litre straight-six engine came a magnificent range of handbuilt machines for road and track.

Once again the tin-top gran turismo market was the main focus, but Rome-based Maserati dealer Guglielmo ‘Mimmo’ Dei had other ideas, resulting in the fabulous Frua-bodied roadster pictured here.

Just two matching cars were built, and this red-and-ivory beauty, chassis 2109, was the first and most desirable. 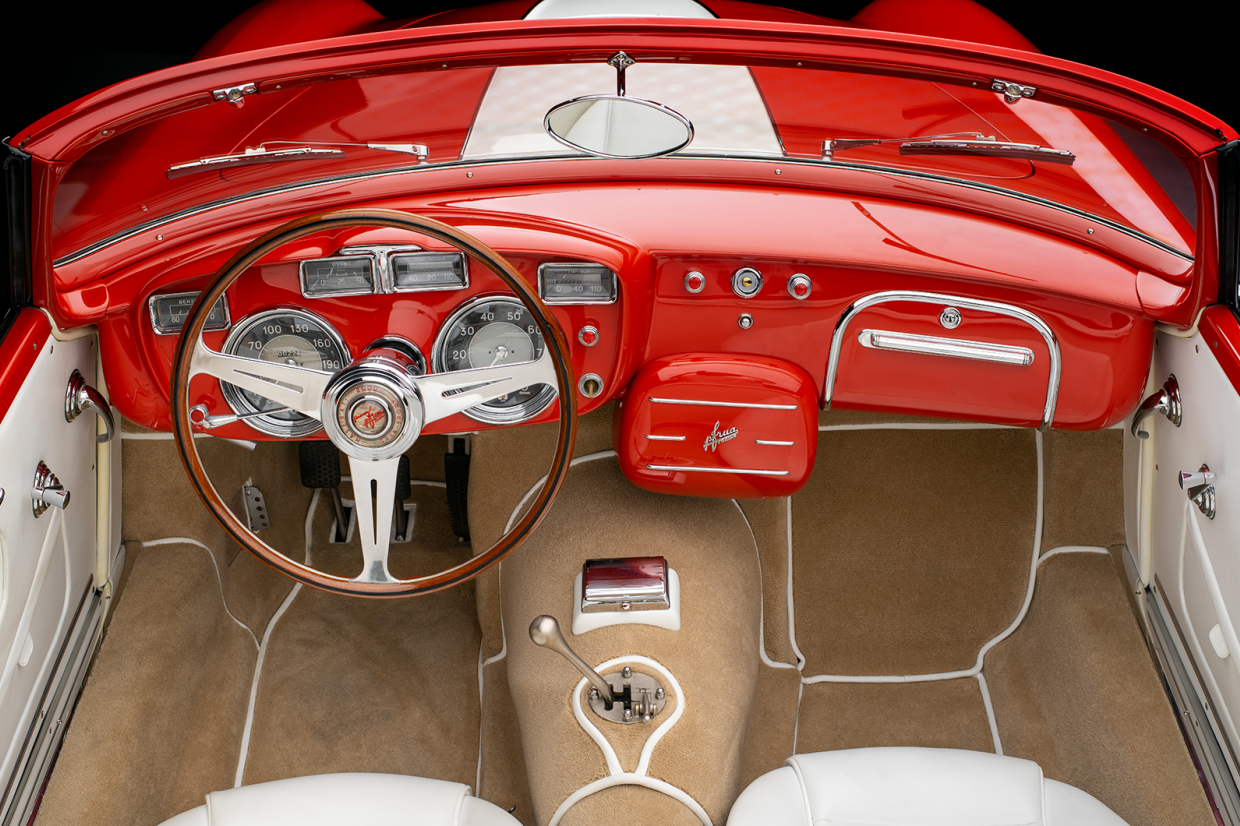 Born in 1909, Dei was an amateur competitor during the late ’30s and after WW2 his contacts with Maserati led to him opening a dealership in Rome.

Although motorsport was his great passion, later motivating him to found the Scuderia Centro Sud team and racing school, Dei instigated some of the most beautiful 2-litre Maserati road cars.

Frua was Dei’s carrozzeria of choice, and when the firm created a sleek, aggressive berlinetta on the A6G-2000 he had the idea of creating a more glamorous open model.

In late 1954 Zagato also had a go at a spider version of the A6G-2000, but the result was no match for Frua’s effort and it remained unsold at the factory for more than three years. 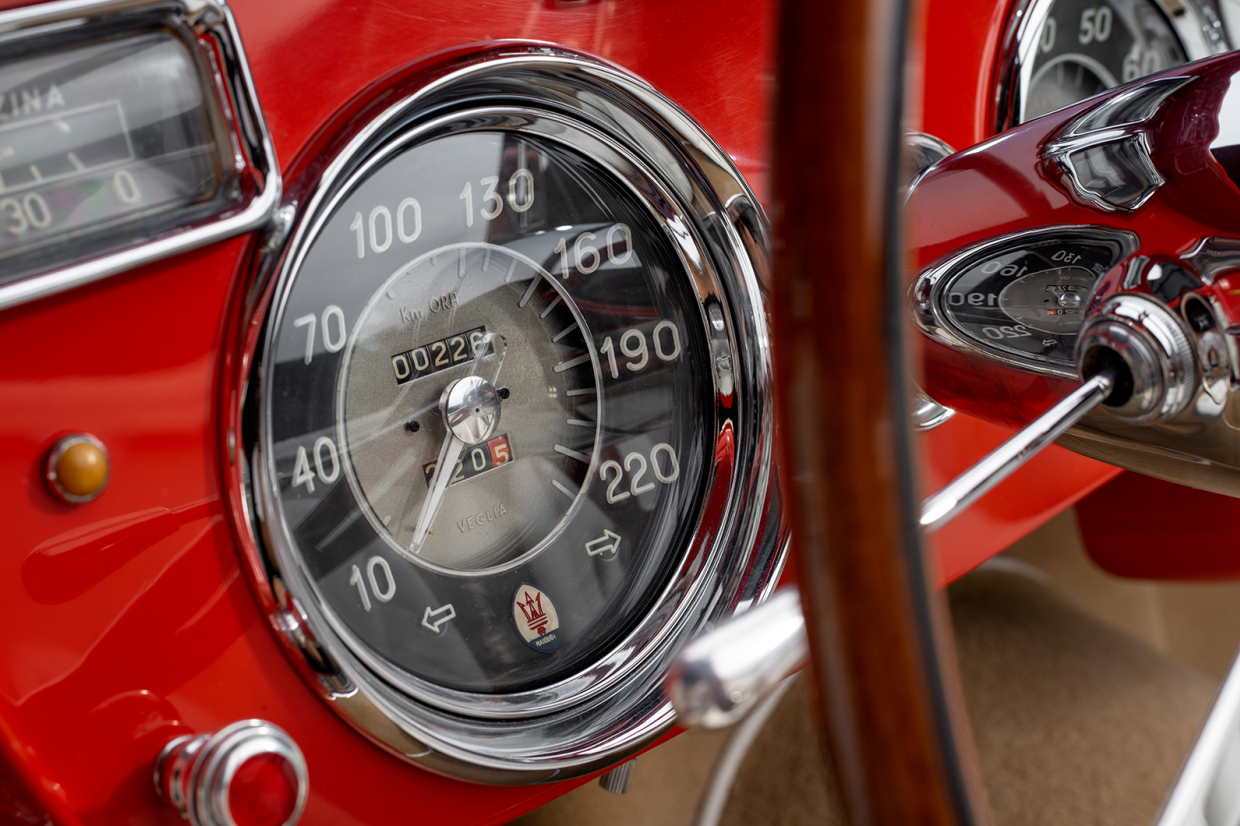 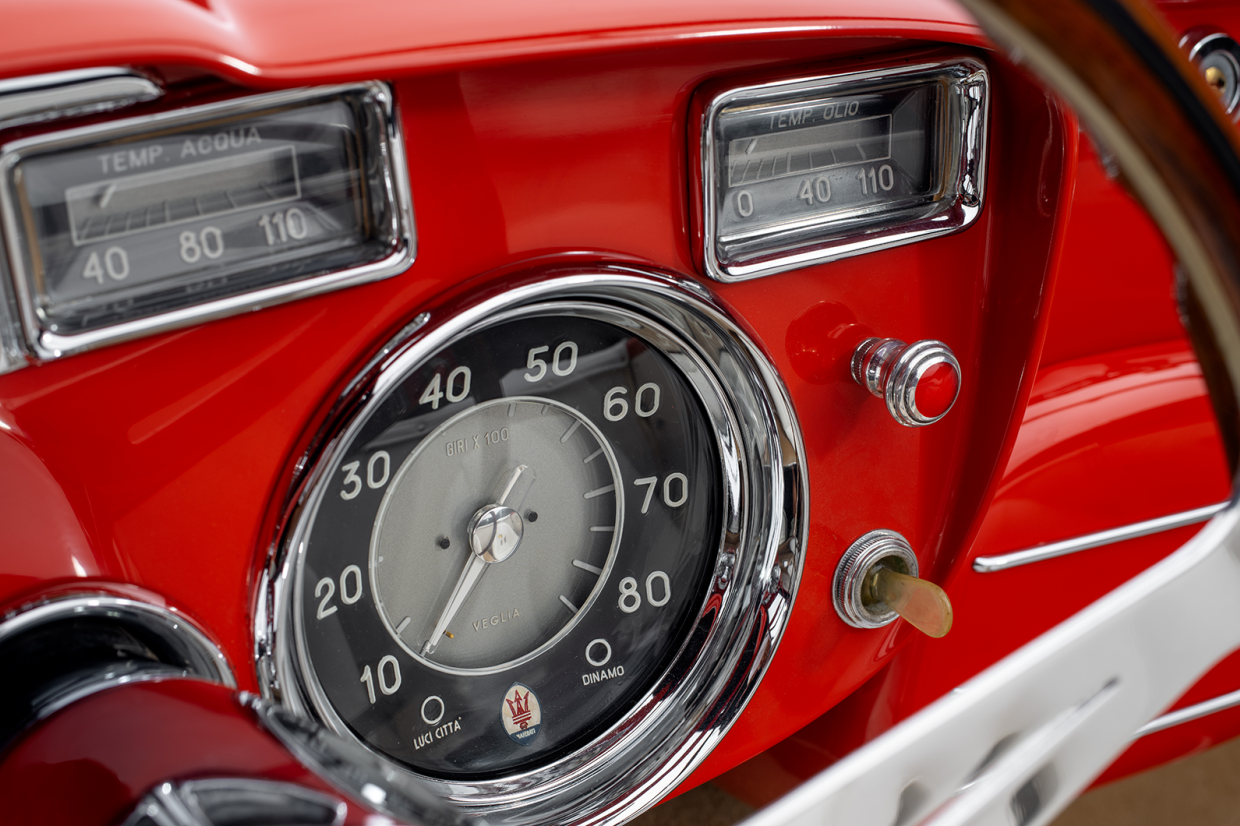 Pietro Frua’s great eye for style no doubt came from his father, who was a respected tailor in Turin.

His automotive work began aged just 17 as a draughtsman at Stabilimenti Farina, where he later gav e ayoung Giovanni Michelotti a job before leaving to start his own studio in 1938. Maserati was one of Frua’s first clients, a connection that continued to the ’70s.

When Dei organised the delivery of two race-tuned A6GCS chassis to Frua’s Turin workshop in early 1955, the plan was to create Maserati’s most seductive roadster, to upstage anything from Maranello, and the talented designer did not disappoint.

Dei’s Rome showroom was struggling with financial challenges, and he was already hatching plans to relocate to Modena and switch to running a racing operation, but his final road-car project would be his most spectacular. 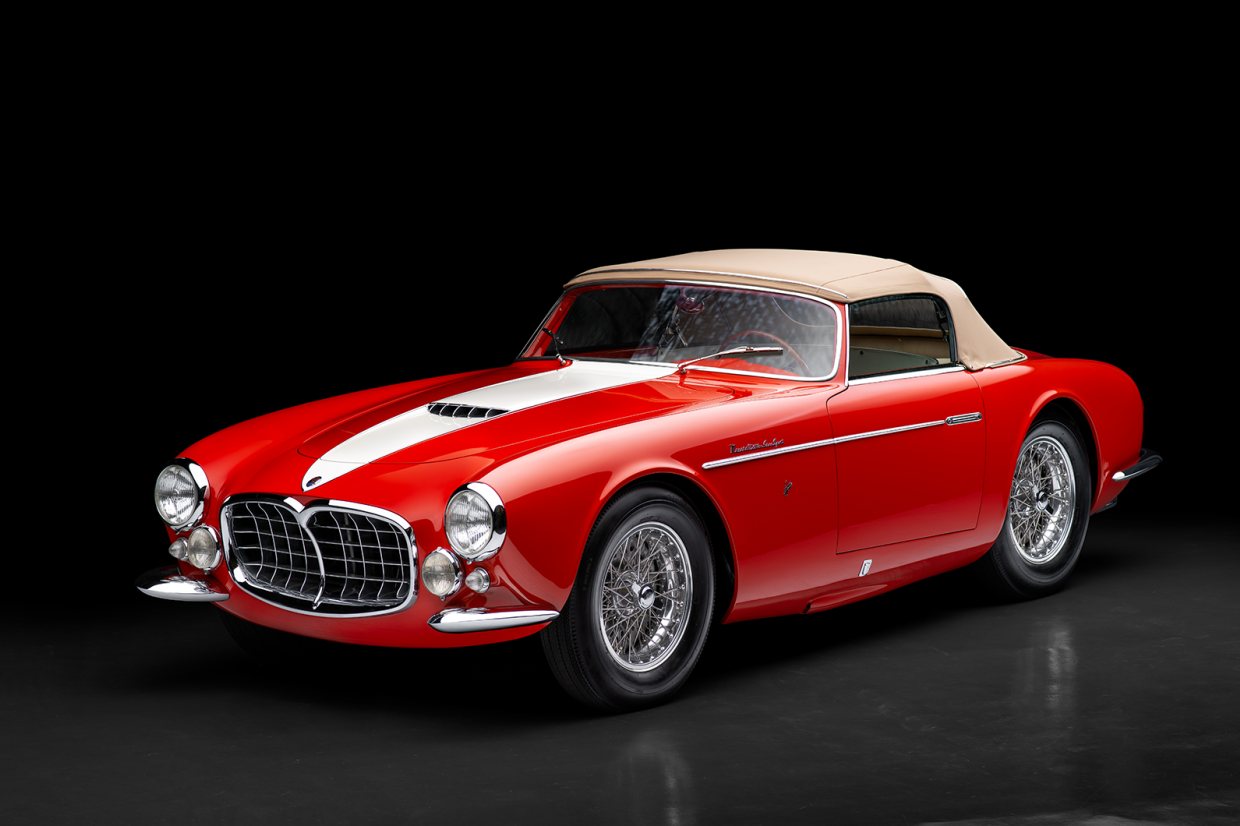 And there was nowhere better to give the exotic new roadster a debut than at Italy’s most famous motorsport weekend, with the world’s press cameras focused on a stage far more exciting than any motor show.

The reopening of the newly rebuilt Monza race circuit for the Italian Grand Prix on 11 September ’55 was a big day.

More than 100,000 fans packed into the autodrome near Milan, all excited to see the reconstructed high-speed banking, which hadn’t been used since 1933 and had been bombed badly during the war.

Among the important dignitaries invited to the event was Giovanni Gronchi, the newly elected President of the Italian Republic. 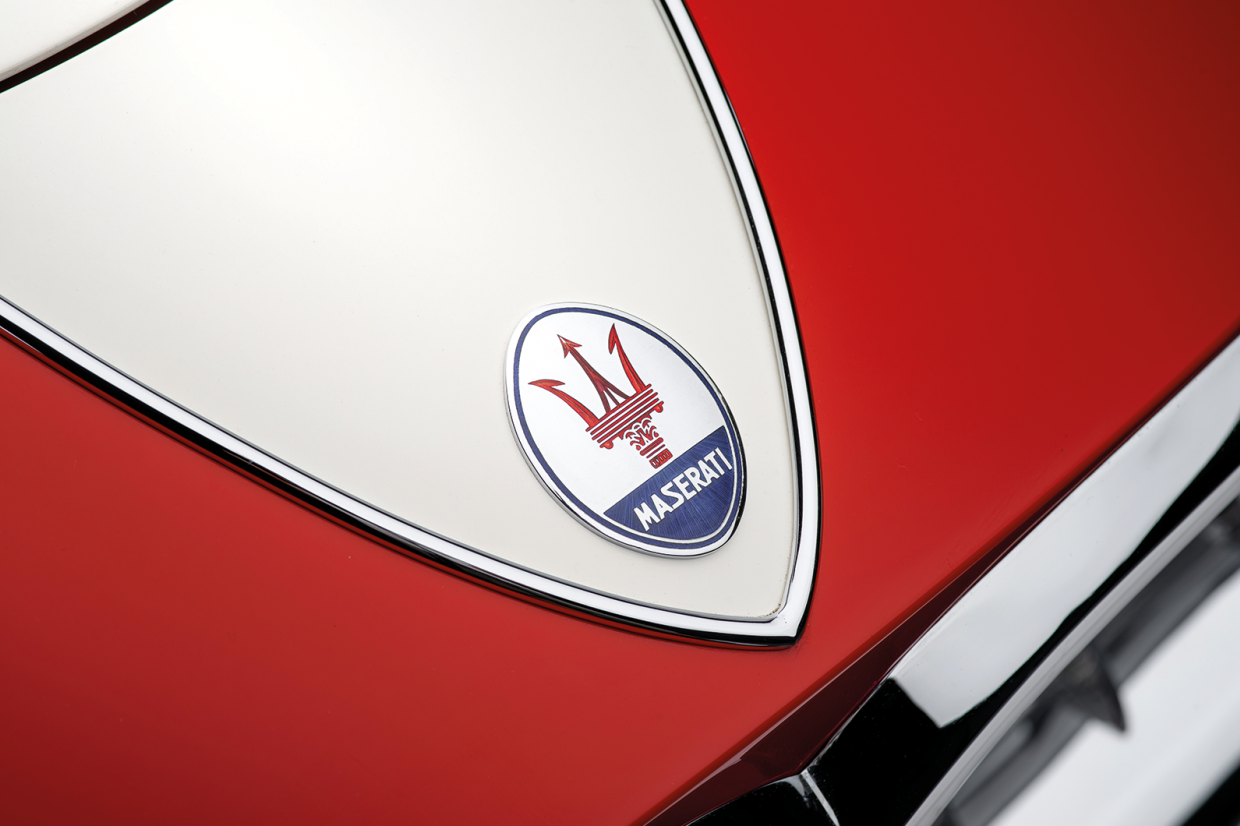 A very special car was needed to drive the co-founder of the Christian Democracy party around the circuit, and Dei had just the machine, a striking lipstick-red roadster that had just been completed by the Carrozzeria Frua workshops.

On its home soil the Trident works team had also entered a unique 250F streamliner for its star driver, Jean Behra, in a vain attempt to catch the dominant Silver Arrows.

In the bright September sunshine, the sensational Maserati drop-top dazzled all who viewed it on the main pit straight, its low, compact form contrasting with the more formal coachbuilt cars being readied to carryVIP guests including the cardinal of the Milan duomo.

After introductions to all of the drivers, Gronchi was escorted to the passenger seat of the Maserati with French ace Behra nominated as chauffeur. 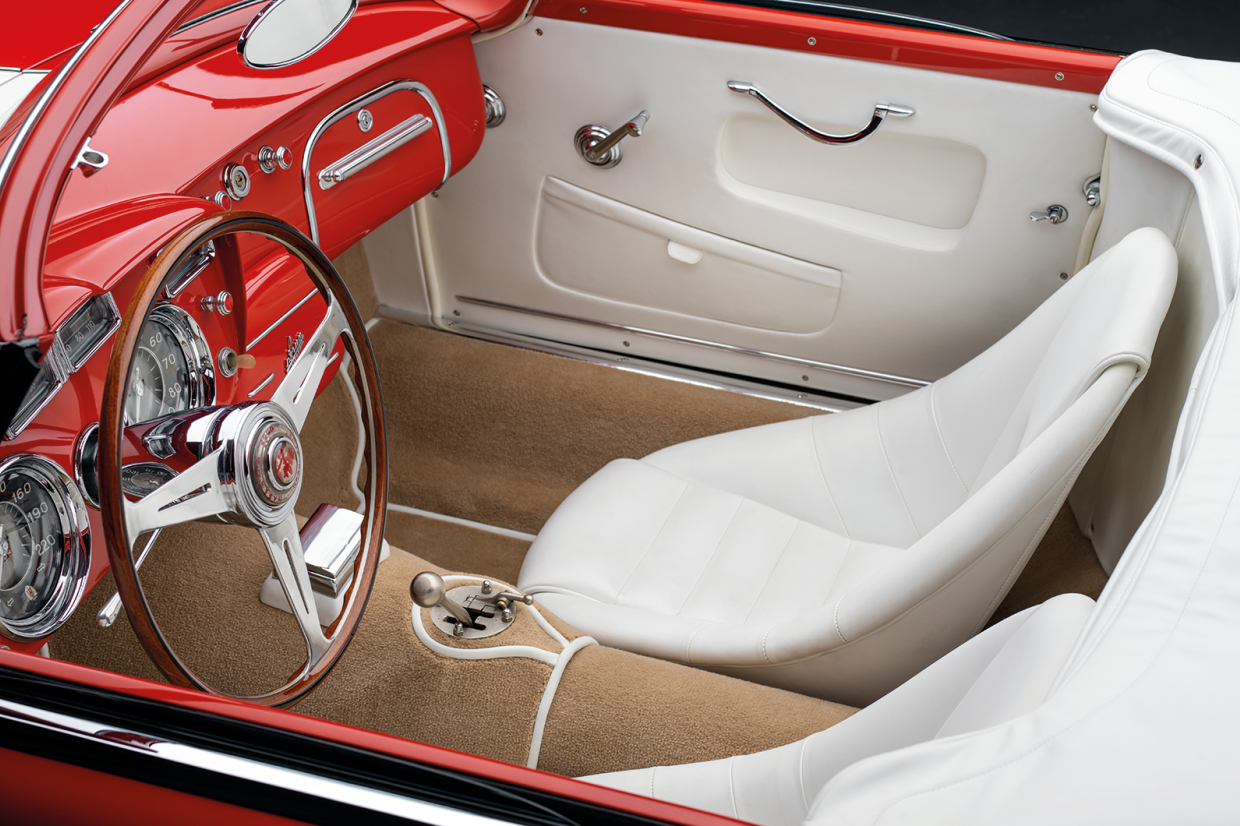 ‘Jeannot’ was having a frustrating time with the streamlined 250F, which had proved no quicker than the standard open-wheeled racer and was well off the pace of the Mercedes-Benz stars, but at least he hadn’t had the scares of the Ferrari team with several high-speed tyre blowouts.

Wearing his signature suede jacket and Suixtil sports shirt, Behra’s casual style contrasted with the suited President as they climbed into the ivory-leather bucket seats that matched the bonnet flash.

After some small talk – Behra could speak basic Italian – the raucous twin-cam 2-litre straight-six was started and no doubt Gronchi grabbed the doortop.

To prevent Behra scaring his important passenger, a group of eight motorcycle outriders arrived to lead the red Maserati around the track with a convoy of important guests following in other special cars. 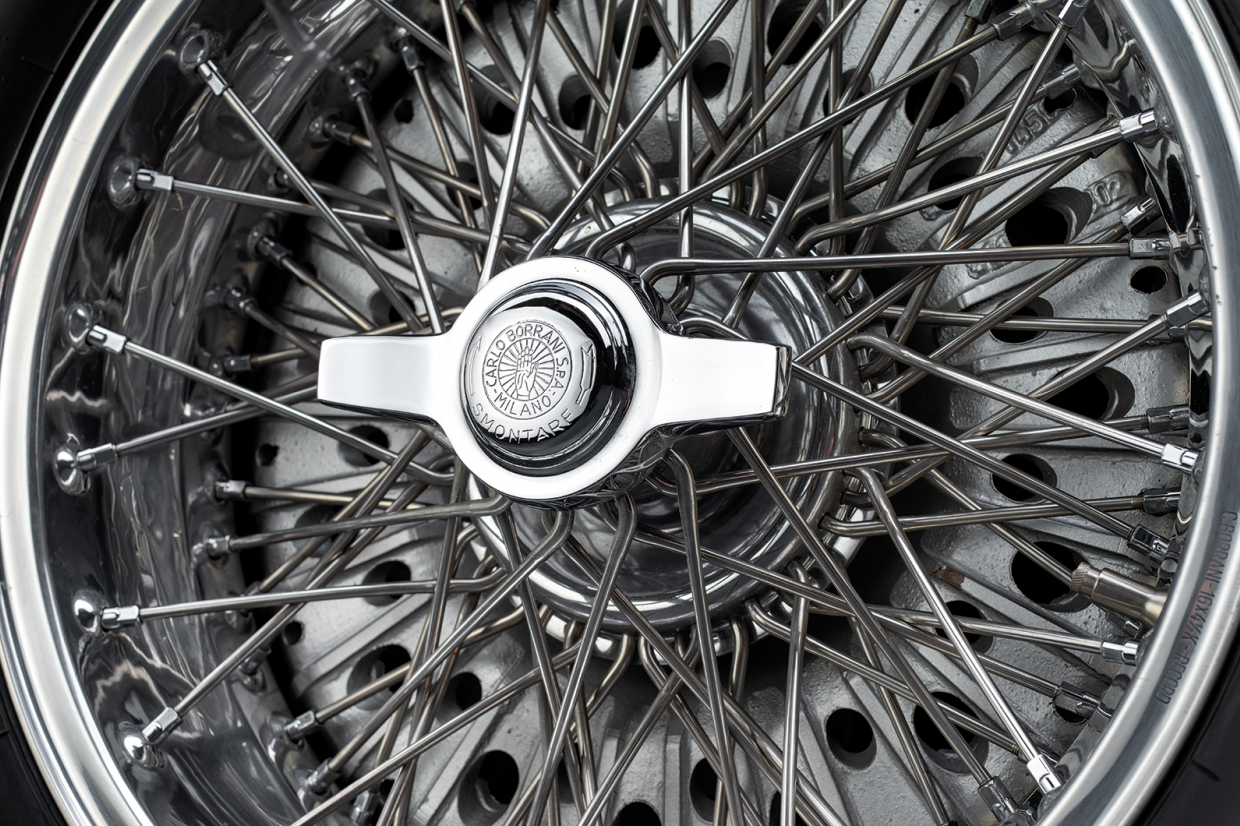 The Italian teams were having a tough time against the streamlined Stuttgart sensations, which had averaged 130mph around the newly completed circuit, but the sight of the gorgeous red sports car parading its precious cargo for alap of the track must have lifted spirits.

Behra would eventually finish fourth in his misfiring 250F, behind a brave Eugenio Castellotti in the Ferrari Super Squalo, but Maserati’s morale was boosted by the news that Mercedes was to withdraw from motorsport, with Stirling Moss set to join the Trident team.

The A6GCS can clearly be seen in a short monochrome British Pathé film of the 1955 Italian Grand Prix on YouTube.

That exotic machine was one of just two cabriolets bodied by Frua, with A6GCS chassis 2109 and 2110 dispatched in July 1955 to Carrozzeria Frua in Turin.

Both had full race specification engines with revised chain-driven camshafts, twin-plug ignition and, most crucially, a dry sump that allowed the talented Frua to create a dramatic low bonnet line, with the wheelarches cut high into the roadster’s neat flanks.

The boot, already packed with a spare wheel and a remote oil tank, was compromised as a result.

For that fantasy weekend escape with a dream companion, the luggage would definitely need to be sent ahead. 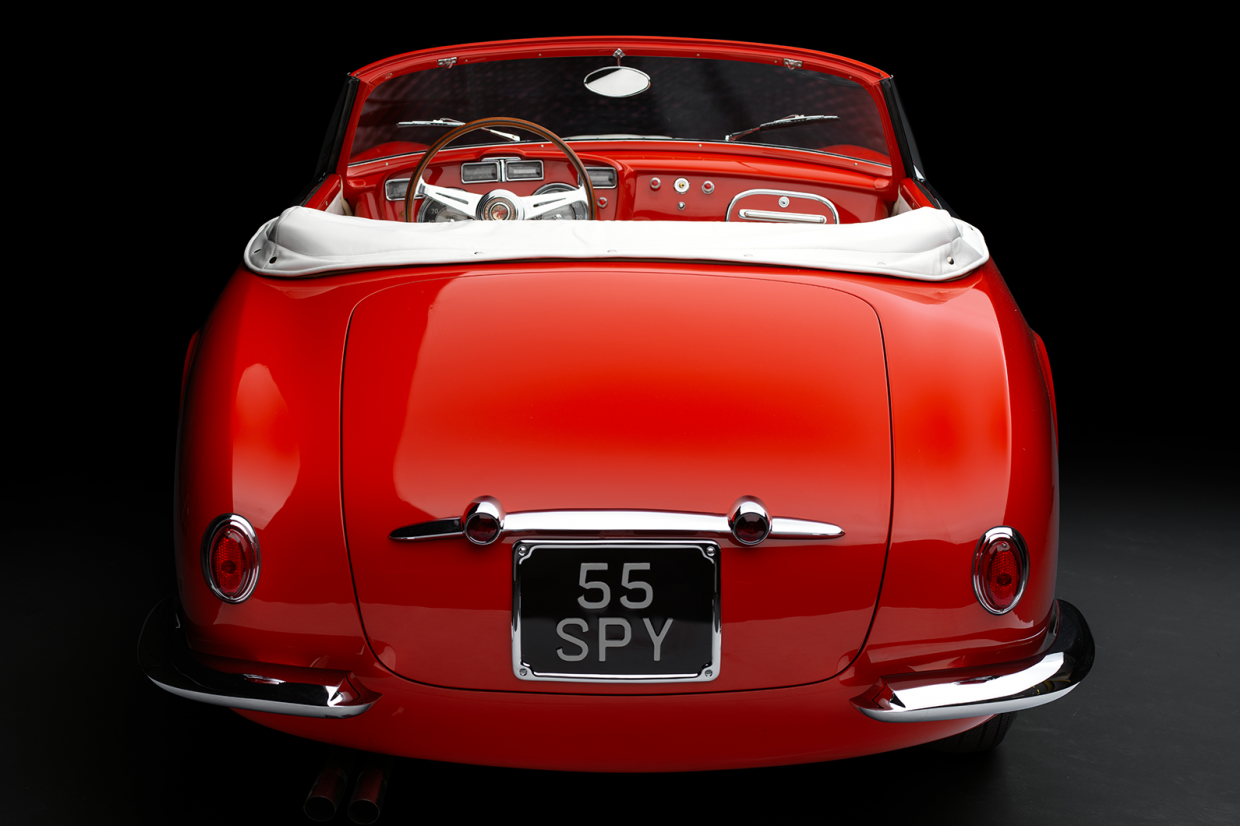 The brakes, like the chassis, were competition-bred. Big, drilled drums were clearly visible through the polished Borrani wires, and with radial ribs for cooling they were beautifully cast and machined.

To identify the pair they had contrasting colour schemes, with 2109 finished in red and 2110 in amore conservative black.

The factory was so pleased with Frua’s design that the car featured on the cover of its latest A6G-2000 brochure. 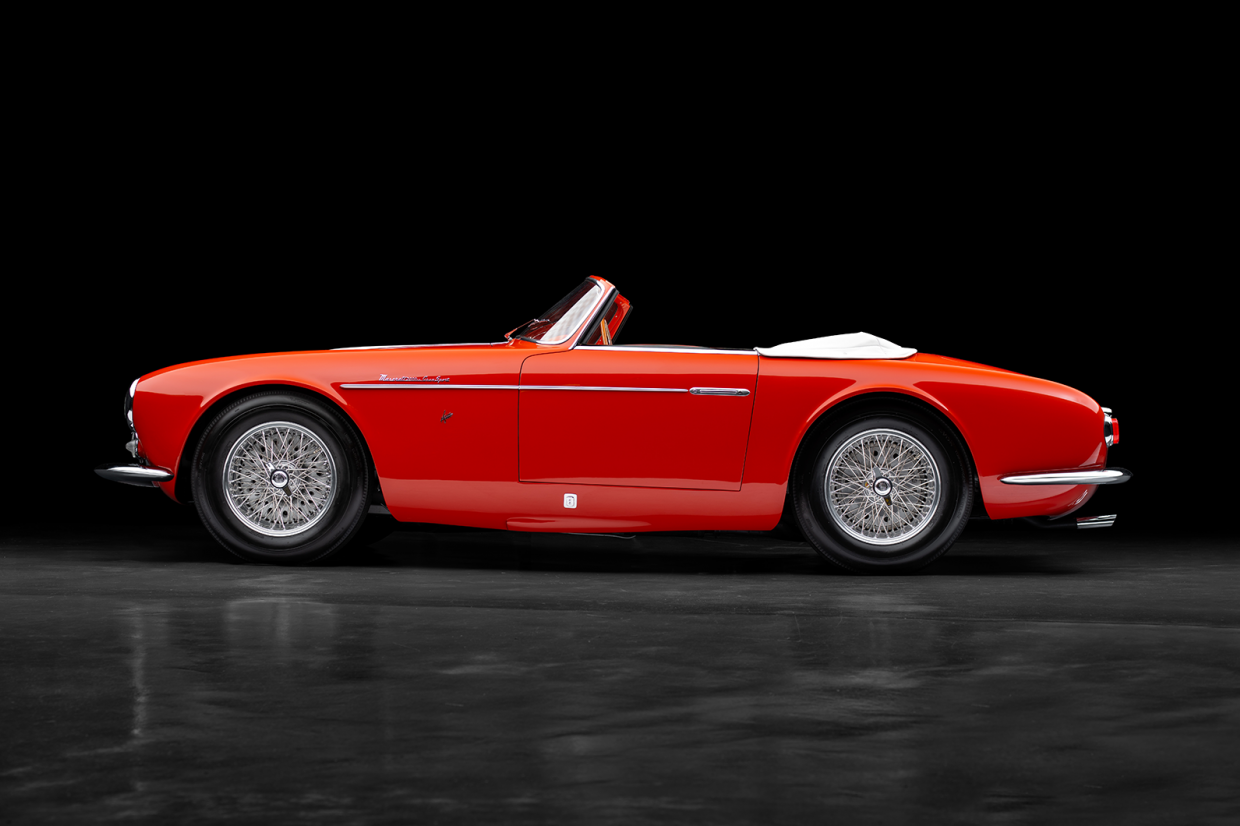 Much of the production was farmed out due to the Trident equipe’s hectic schedule, with the chassis produced by Gilco.

The extremely rigid design featured large main tubes that swept inwards at the front and up over the rear axle.

The front suspension was by unequal-length wishbones, coil springs and an anti-roll bar, with Houdaille lever-arm dampers, while at the rear there was a live axle located by quarter-elliptic springs and a system of radius rods with the lower member forming an ‘A’ under the differential casting in a ball-and-socket joint.

Open the bonnet and it’s clear that this elegant roadster has a racing heart. With crackle-black cam covers and triple twin-choke Webers sprouting open trumpets, this all-alloy jewel punches out 160bhp at 6000rpm and loves to rev. 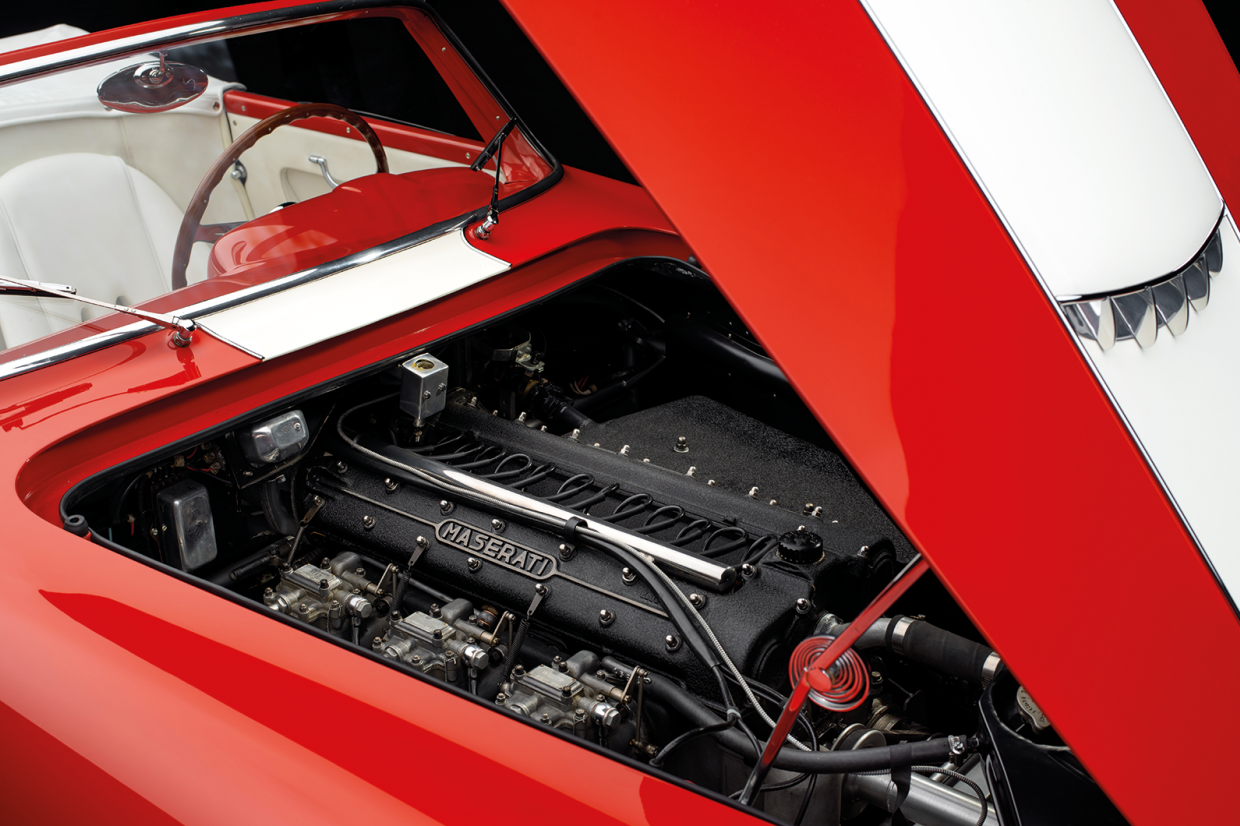 With the whole car weighing around 840kg, the performance from this sexy 2-litre is as impressive as you’d expect from a competition-based design, with a top speed of 130mph.

From the moment you push the starter, the engine reveals its breeding with a raucous, rasping exhaust sound straight from an early ’50s Grand Prix grid.

The gearbox is slick, with a precise change, while the sharp worm-and-sector steering is superbly weighted.

With a crisp turn-in and that race-bred chassis, the car feels nimble and poised. The brakes are strong and, unlike a contemporary Ferrari, you never wrestle the A6G. 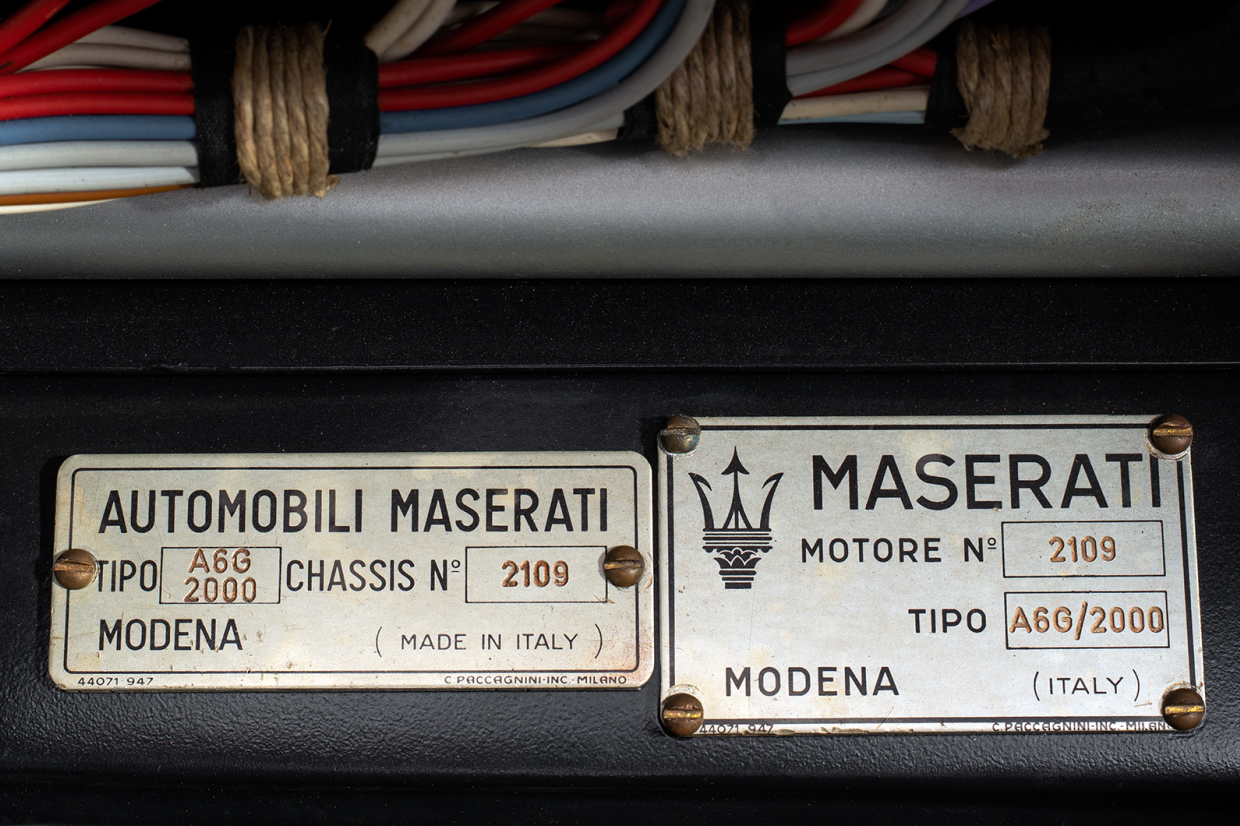 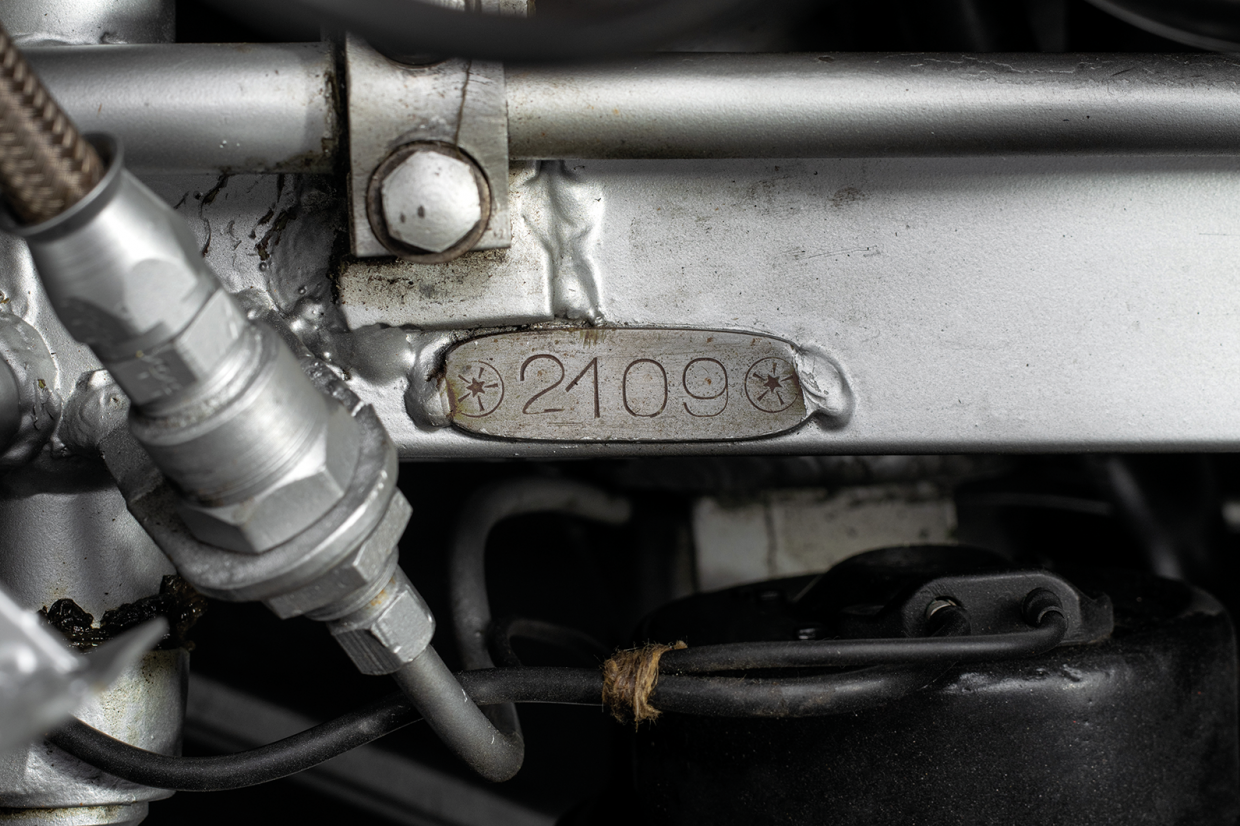 Although the 2-litre ‘six’ lacks legs on the autostrada, it loves the challenge of a sinuous pass as the racers proved on the Targa Florio.

And, unlike in the noisy, hot cockpit of a Zagato or Pininfarina coupé, the lucky owner could enjoy its performance and strident yowl without arriving for dinner in a sweat.

After its debut at Monza, chassis 2109 was entered for the eighth Concorso di Eleganza per Autovetture e Autopullman on 22-23 October.

The red roadster was driven on to the dramatic Pincio Terrace overlooking Rome by Dei’s friend Maria Teresa de Filippis, the aristocratic ace who later joined the Maserati team. 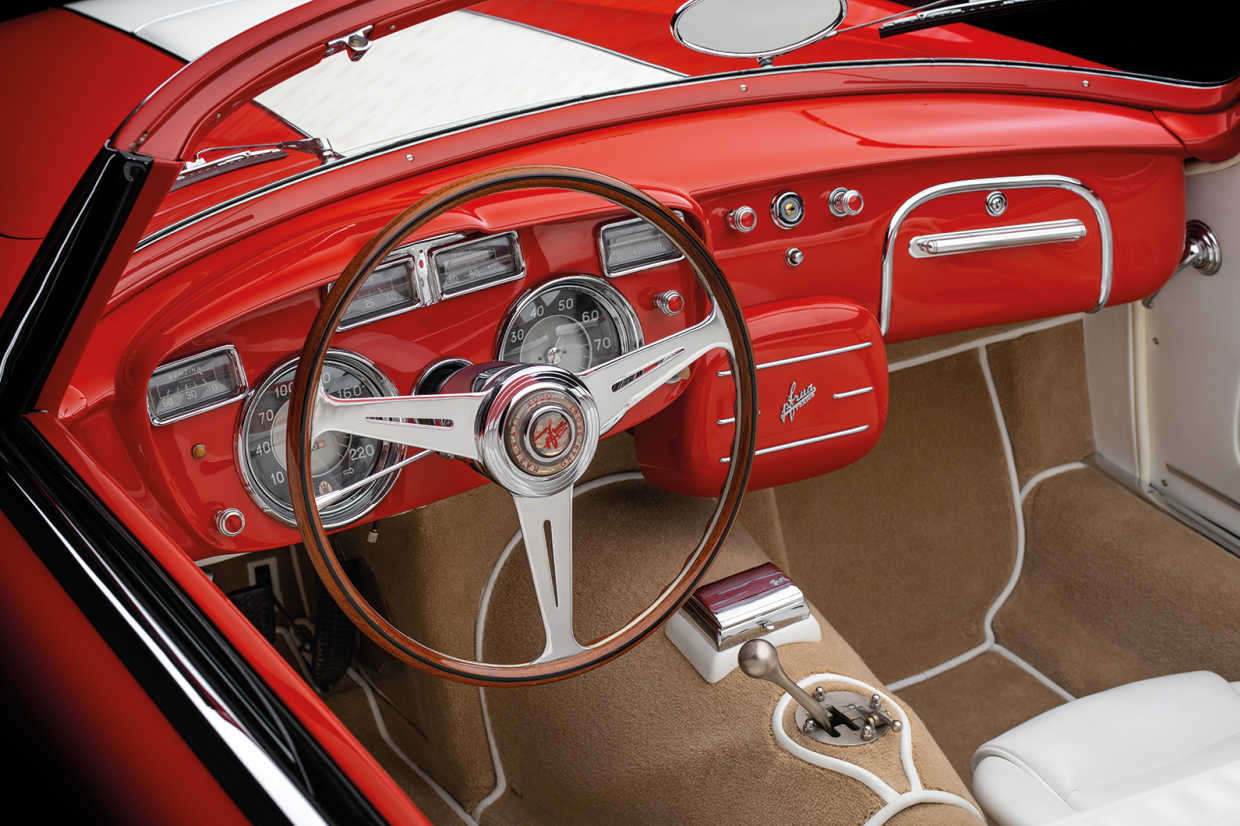 Due to the high price-tag, Dei had to wait another six months before a wealthy buyer could be tempted.

That enthusiast was 21-year-old Vittorio Costantini from Macerata, a lofty town on the east coast of Italy.

Costantini must have savoured the A6GCS’s great performance and nifty handling on the local hilly routes up and down to the Adriatic coast, with the top down and glamorous companions alongside.

Happy holiday snaps show Costantini and the Maserati touring all around Italy, including Naples.

As with so many exotic Italian sports cars, the Frua roadster was eventually sold to America, where by the early 1980s it had been secured by Michigan-based collectorTom Mittler. 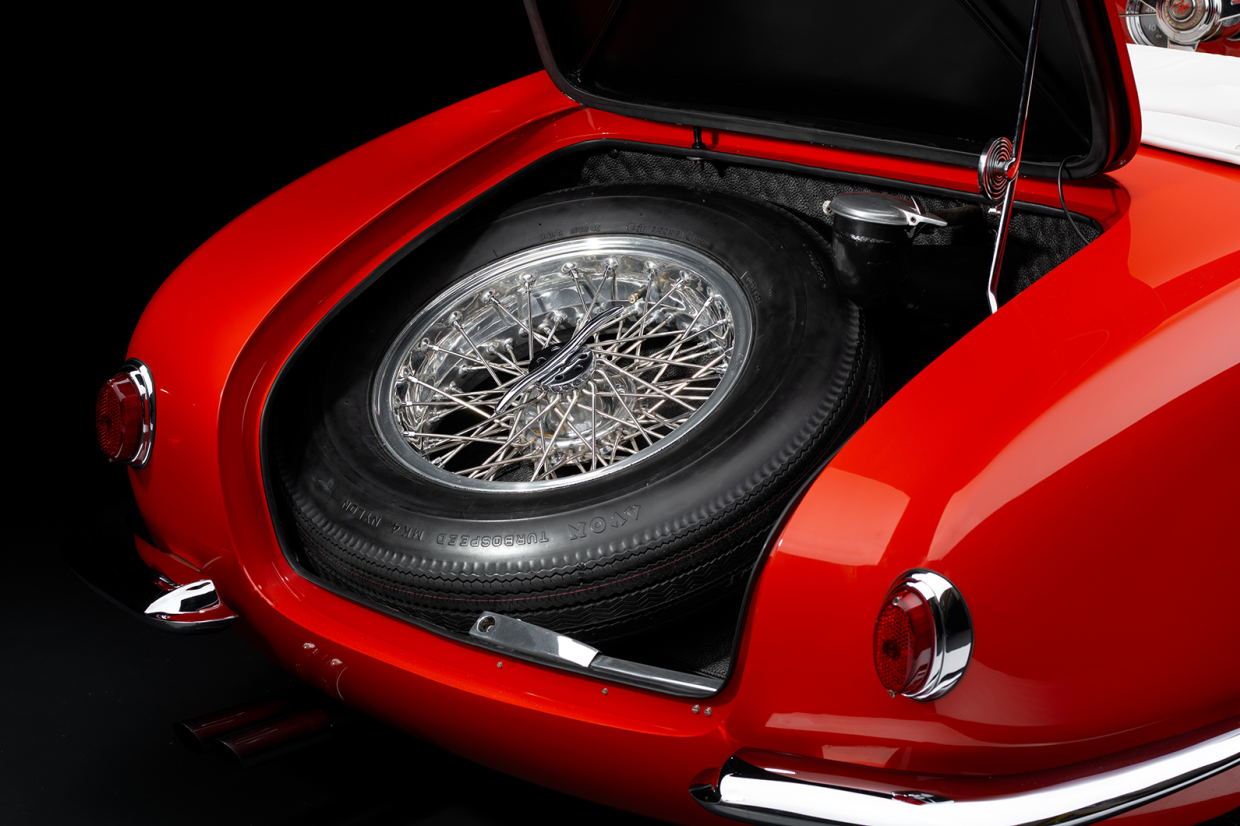 This popular enthusiast indulged his love of Italian classics, historic motorsport and vintage boats having made his fortune as one of America’s largest independent gas suppliers.

The Frua Maserati was meticulously restored to concours condition, but mysteriously the paint finish was changed to black and ivory, the same scheme as its sister car, 2110.

The immaculate roadster was given a debut at Pebble Beach in 1992, where it won its class before joining Mittler’s other Latin classics including a Ferrari 250GT California and a Maserati 450S-powered hydroplane.

Tragically Mittler died from a stroke aged just 67 in 2010, and for the following nine years the Maserati remained hidden away in the family estate until it was tracked down by specialist Kidston SA for a European collector.

A deal was done and for the first time in nearly six decades, 2109 returned to Italy. 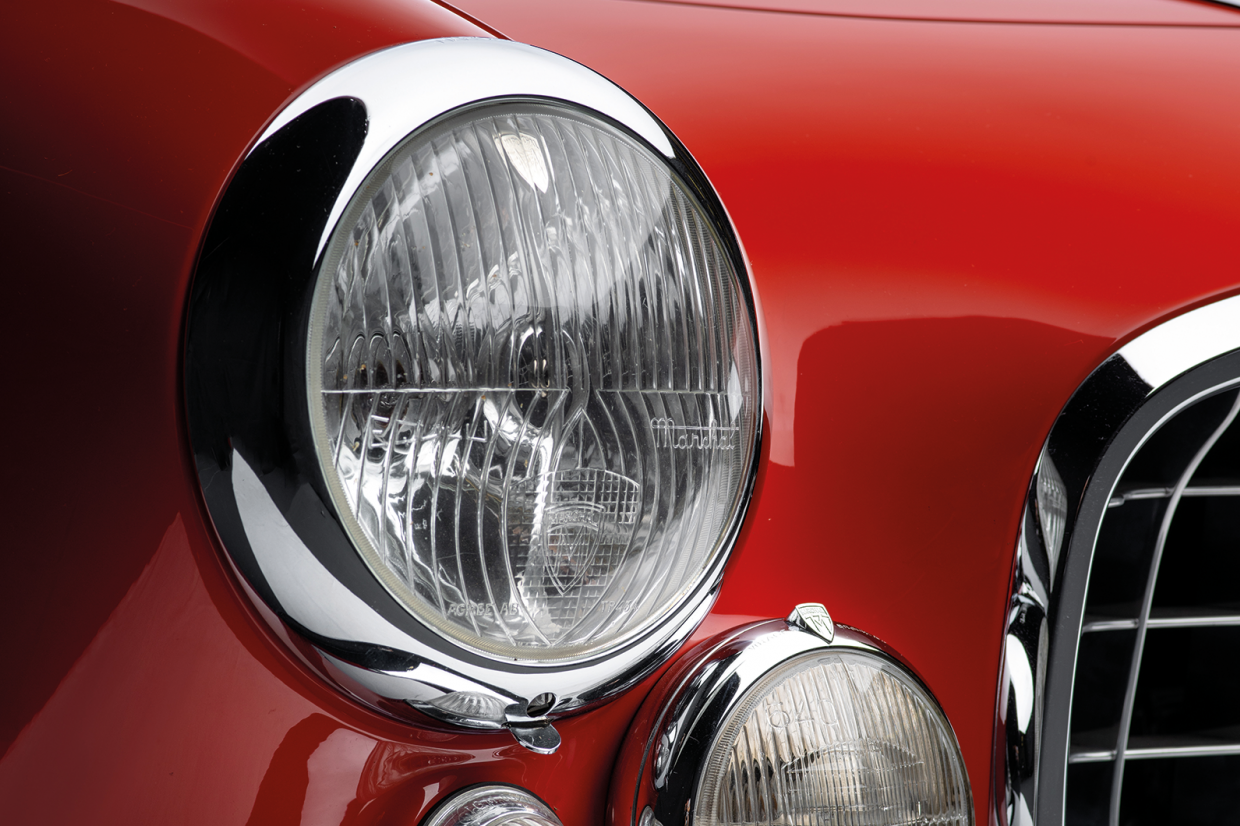 Managed by Simon Kidston and Emanuele Collo, restoration began to return the car to its distinctive original colours.

Extensive research on the rare machine was put in by Maserati authority Adolfo Orsi, who has close links to the marque through his grandfather Adolfo and father Omar, who held the company’s reins from 1937-’68.

The work was carried out by Cremonini Classic, the respected Modena-based specialist.

After the black paint was removed, the body was found to be highly original with only minor repairs required before it was prepared for a repaint in the original rosso. 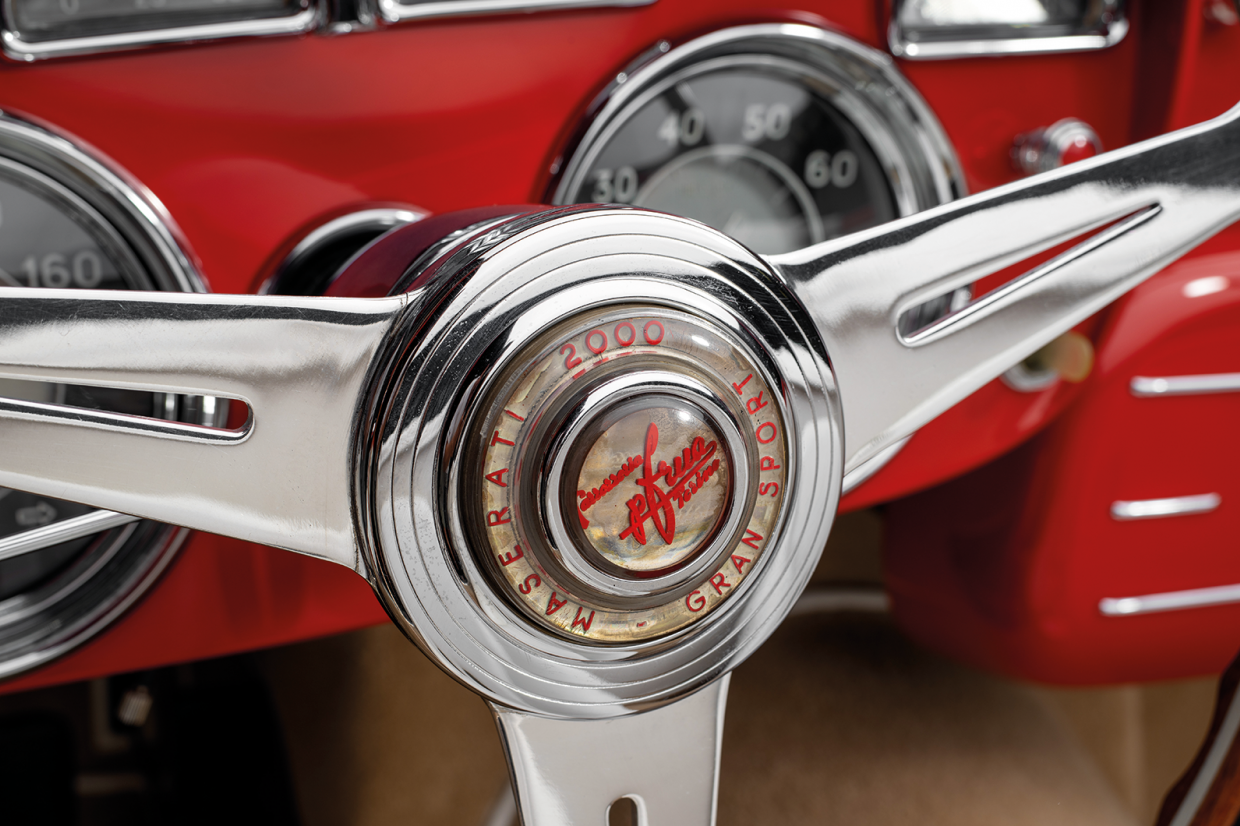 For the mechanical work Kidston enlisted former Maserati man Giuseppe Candini, who joined the racing department in 1954 and worked with Juan Manuel Fangio during his Championship-winning 1957 season.

Following a thorough rebuild, the A6GCS now goes as well as it looks.

As the only Frua cabriolet with its factory competition engine, and now at last returned to its original paint scheme as first shown at the Italian Grand Prix, this glorious Maserati is almost guaranteed to be a winner wherever it eventually makes its post-restoration debut. 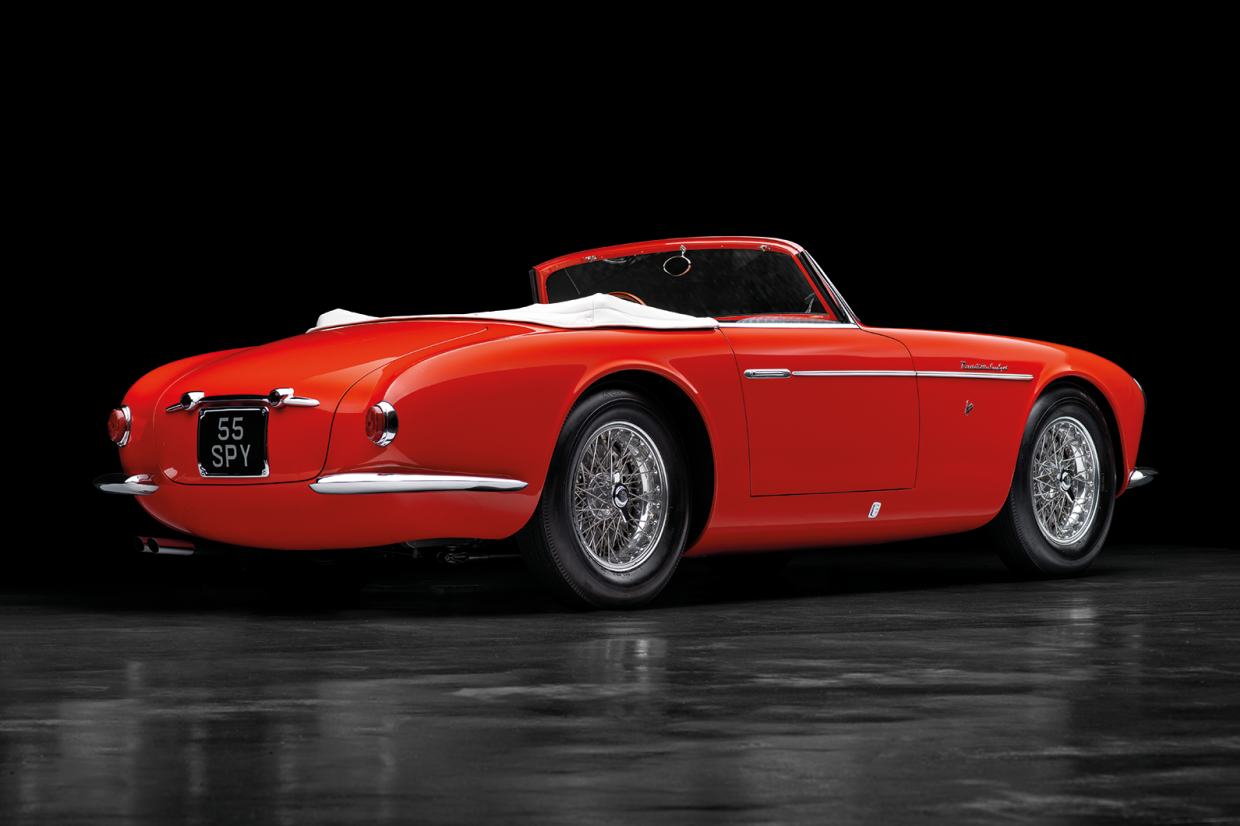 Maybe it’s time to take chassis 2109 back to Monza for a parade at the centenary of the Italian GP in September 2021, but if I were the lucky owner I’d be heading to the Amalfi Coast, just as first keeper Costantini did.

The sublime style and glorious sound of this beauty blasting through the coastal hairpins between the villages of Positano and Ravello could only be improved by having Monica Belluci in the passenger seat.

Well, we can all dream… but this fabulous roadster inspires such fantasies. 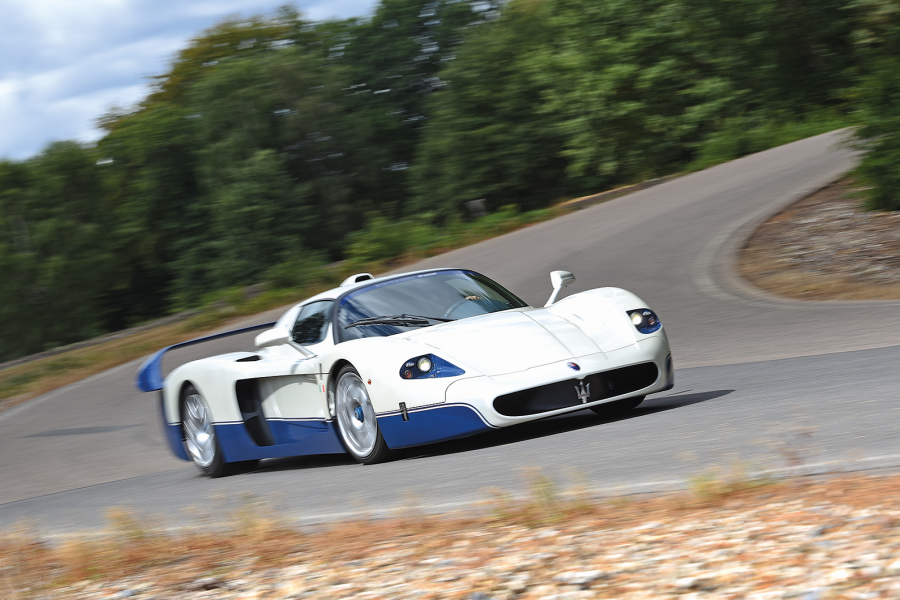 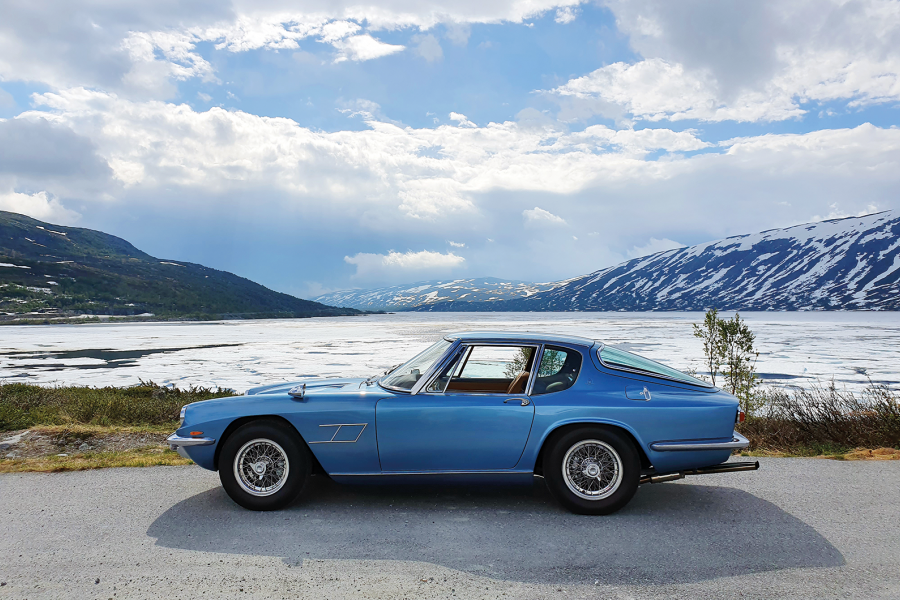 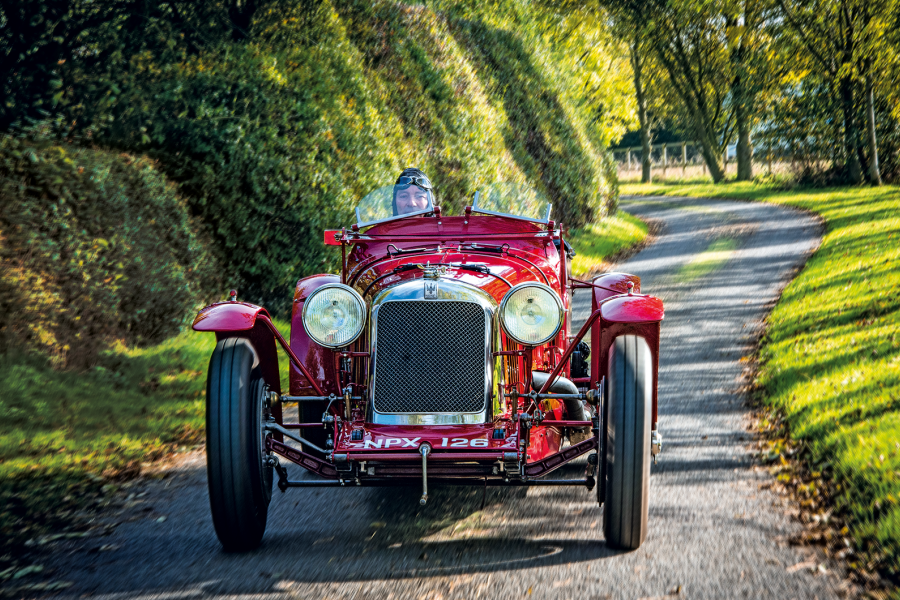 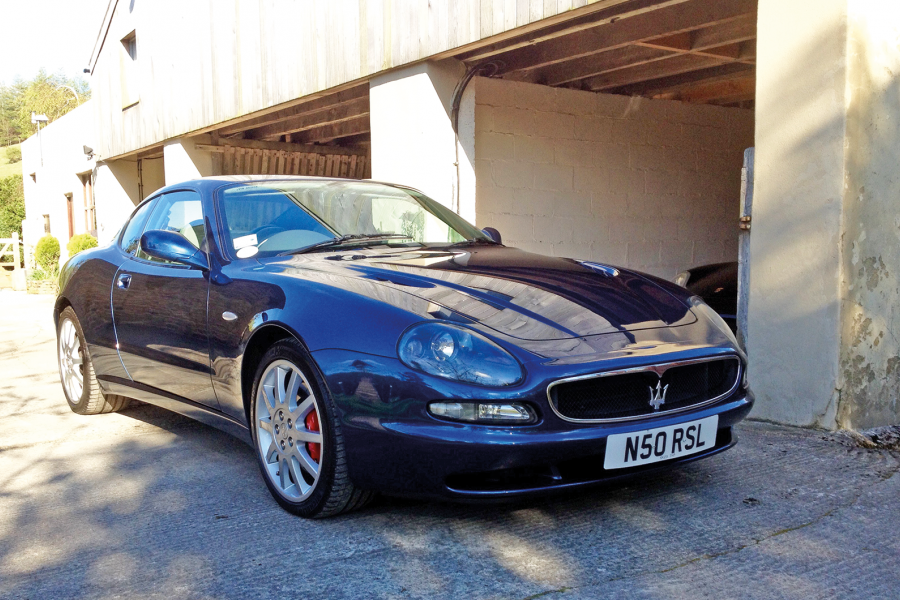