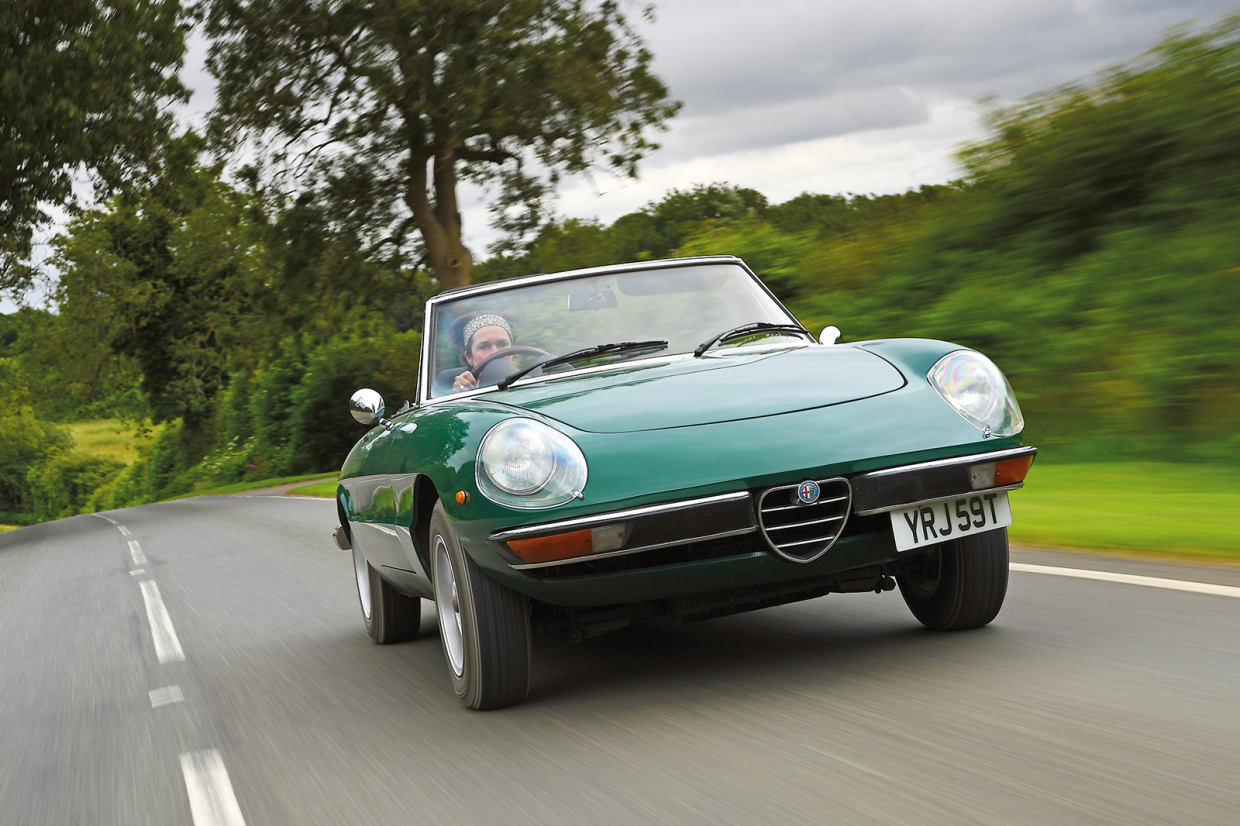 If there’s anything that gets close to Imogen Paine’s passion for her collection of 13 rabbits, it’s her 1976 Alfa Romeo Spider.

So much so that she has even named her prized Belgian Hares, Malcolm and Deirdre, after the couple that inspired its purchase.

“I grew up in south Oxfordshire, and when I was about 12 my best friend’s uncle Malcolm bought his wife, Deirdre, an Alfa Spider in white,” she explains.

“I was a real tomboy, mad about football and cars, and I was smitten by it. He drove us over the local hills like the clappers and I knew from then on that what I wanted was a Spider. It just stuck with me.” 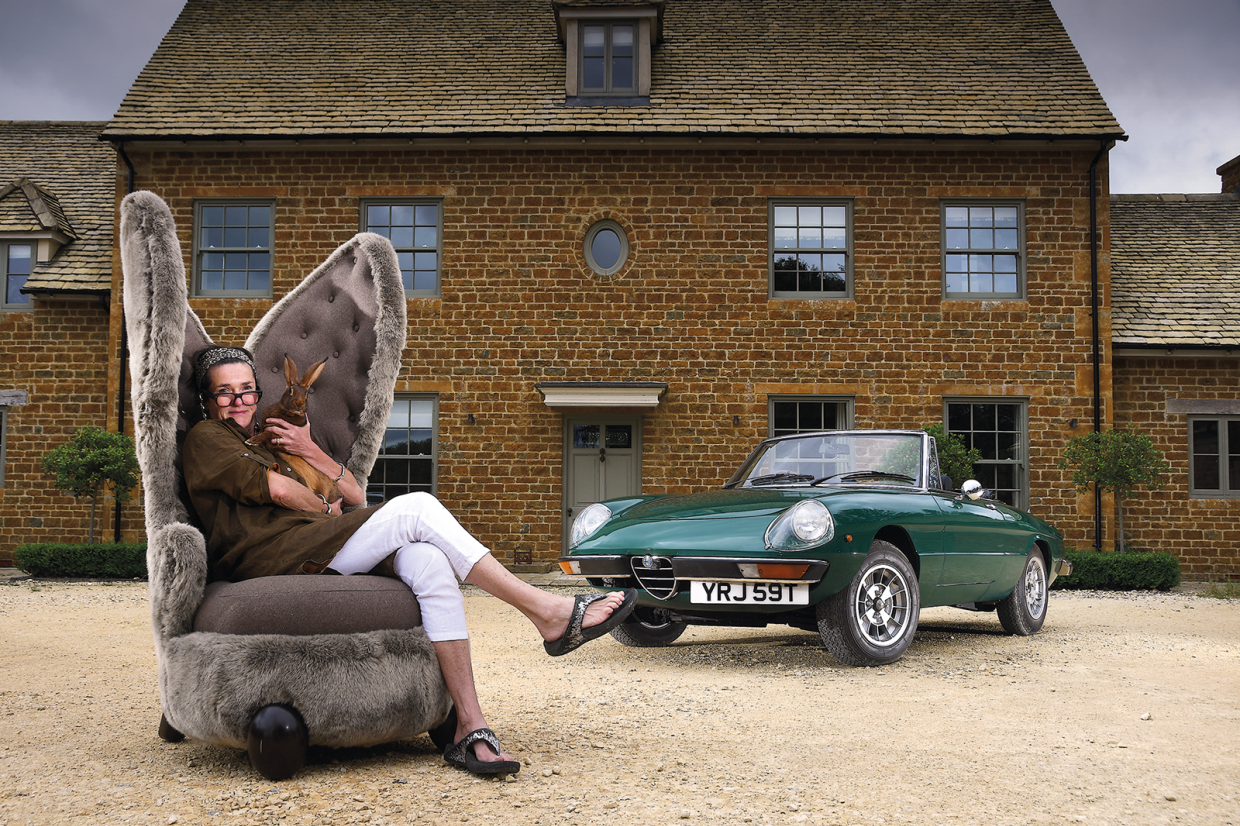 Fast-forward to the mid-’80s and, after persuading her mother to buy a Matra-Simca Bagheera and then getting herself a Mini as her first car, Paine began looking for her dream Spider in earnest.

Built in South Africa on 27 December 1976, the 2-litre Spider was exported to the UK in 1977 and was registered here in August 1978 before being sold to its first owner.

Although still fairly young, it had already led a hard life: “It was six years old when I got it, and I was told that its first owner had been a big bloke in St Albans who had burnt out the engine.

“The motor was knackered so we replaced it with an engine from a brand-new GTV that had been written-off.” 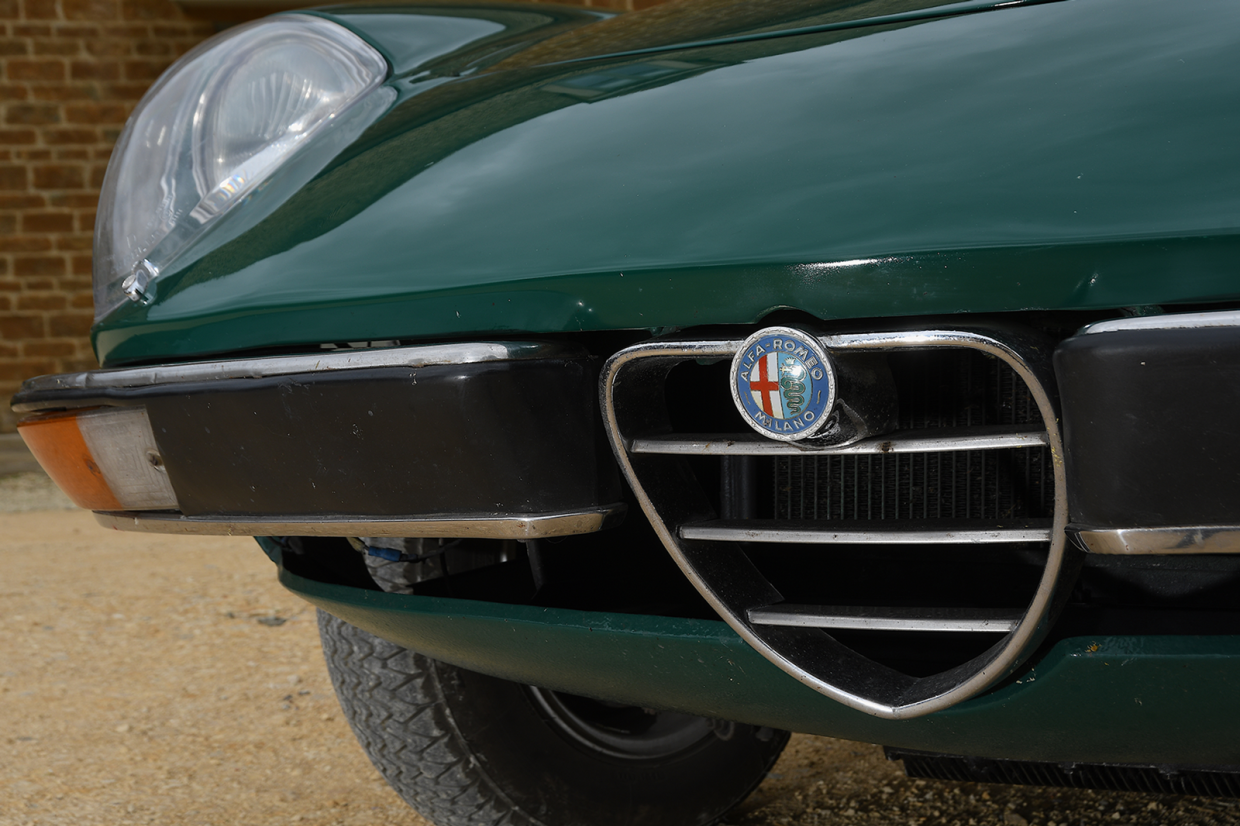 “I lived in London at the time,” she continues, “so it was kept on the street in Chelsea for years and there everyone ‘bumper parked’. I got so sick of the nose being caved in that I eventually fitted protective bumper bars.

“In those days it was my daily driver, until eventually my then-husband got an Alfa Sportwagon through his business – we chose an Alfa so we could sneak the bills on this car through the company!

“It was my everyday car for 10 years until I needed something more grown up.” And larger, because Paine’s day job is as a sculpture restorer.

“I once went to a Canterbury auction and bought an Orientalist marble gypsy girl,” she continues. “Because this was my only car, and I didn’t want to pay shipping fees, I put the base of the sculpture in the footwell, reclined her in the seat and put the seatbelt around her.

“Eventually, I got a BMW estate as my third car ever.” 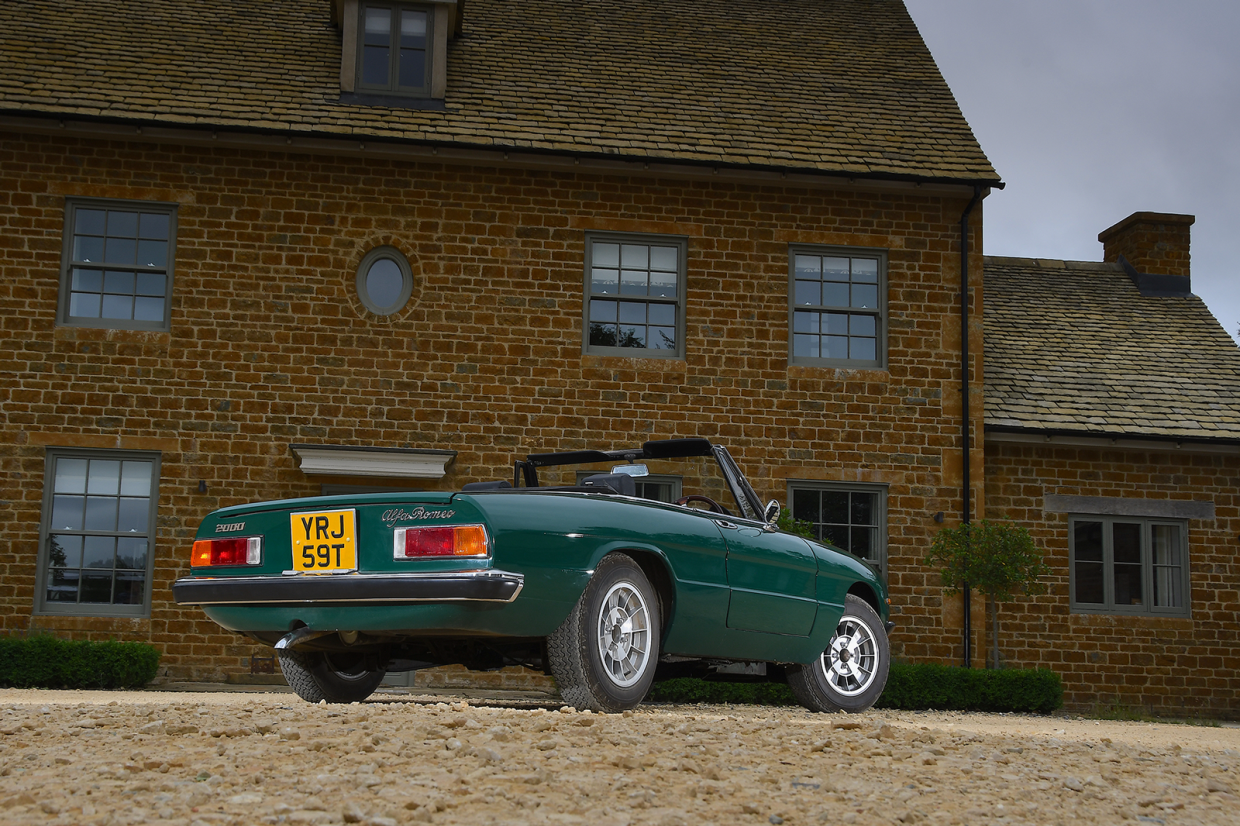 The Alfa continued living on the road, however, much to the chagrin of her neighbours.

“One was an evil old man who kept running a key down it – until I reported it and the police gave him a telling-off. Then in 1997 I bought an old bacon factory in Kennington, which meant that I could finally bring it under cover.”

With the car being offered a bit of protection at last, Paine could attend to the various bumps and scrapes it had received over the years, and the paint was refreshed in its original hue of Verde Pino (Pine Green).

“It had the odd little prang and one drunk guy kicked the door in when it was on the street,” she recalls. “I had to run after him and make a citizen’s arrest!

“But I had looked after it and always wanted it to be spingly-spangly, so I took out the plastic seats and put in leather, then got a new gearknob. It was looked after by Ian Ellis – he was a male model at the time, so I was always very happy taking it to him…” 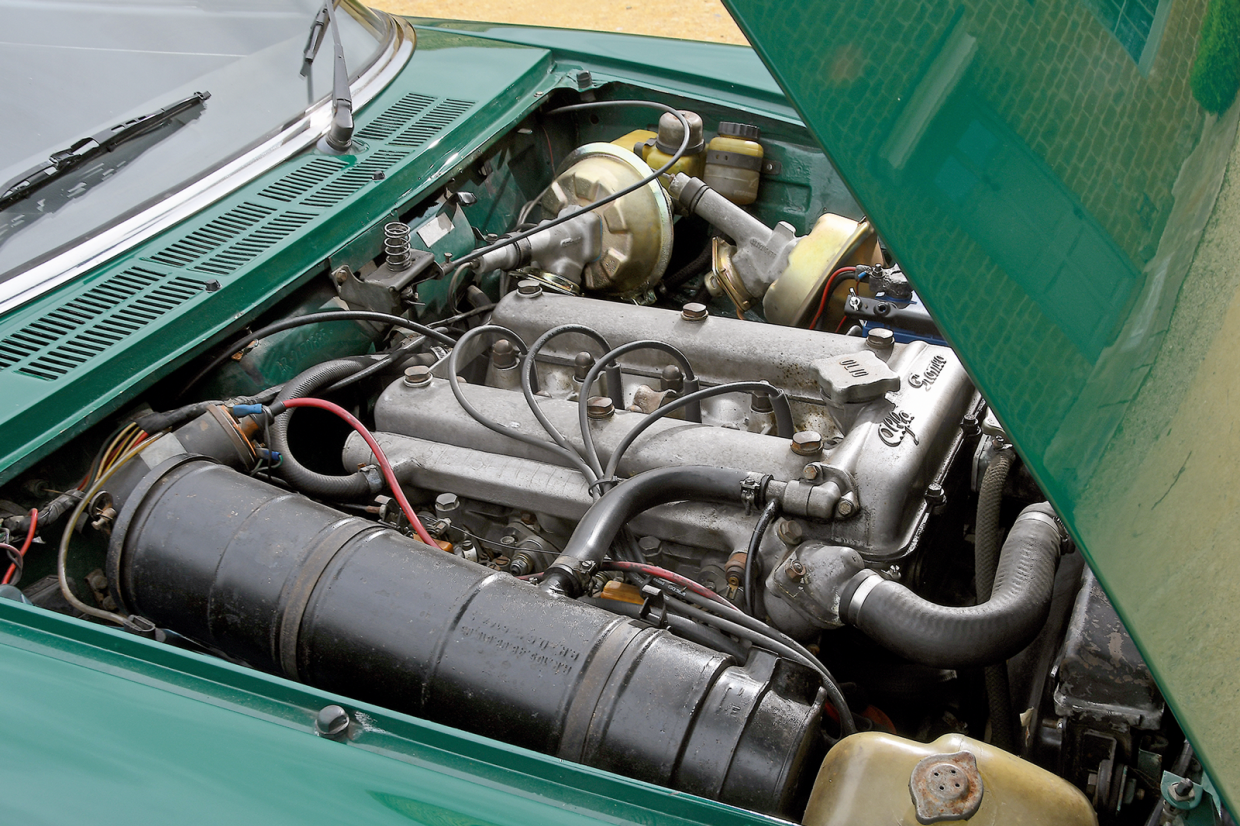 Slowly the Alfa became used more and more sparingly, until the time came when Paine made the heart-wrenching decision to part with it after 30 years together.

“Sitting in London traffic with the roof down and breathing in fumes was no fun. Then it got blocked in at home and sat there gathering dust; it became a bit of a pain.

“Ian had asked a few times if I would think of selling it, then in 2014 he told me about a chap who was looking for an S2 Spider; we’d met years ago at a local squash club and he had remembered my car. So I sold it.

“He was the right person for the car, but I still wept as it left… then went down to Belstaff and bought myself a jacket! I wore that more during the first two years than I’d driven the car, so at first I didn’t regret my decision.” 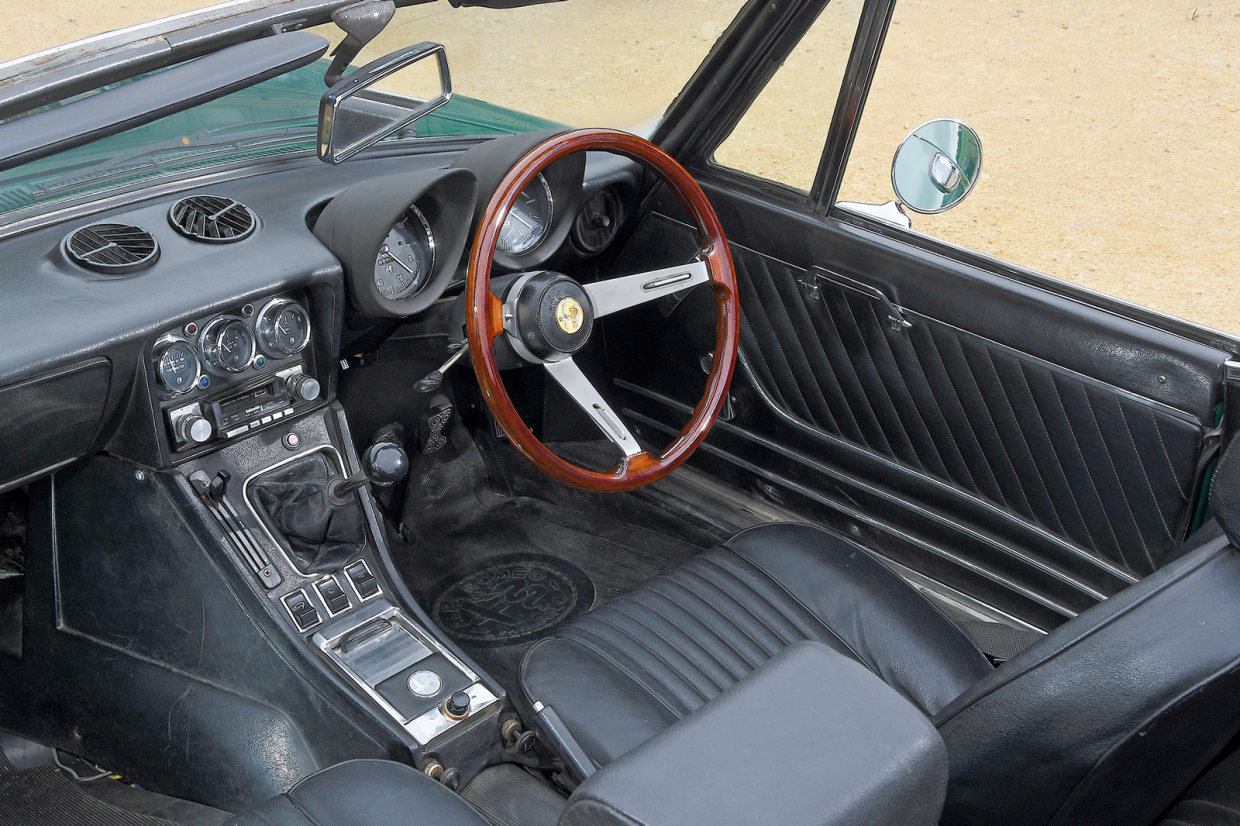 In 2016, however, a move back to Oxfordshire and the country sparked pangs of longing for her beloved Alfa Romeo.

“I really don’t know what triggered it,” Paine ponders, “but it may have been when a friend bought a Jensen Interceptor.

“I decided I needed another Alfa, so I started looking for one in early 2019. I saw a few, but none of them were my Spider – most were red and it had to be green.

“So I started looking at modern sports cars instead and even test-drove a Jaguar F-type, but couldn’t really afford it.

“Three times I composed a text to the new owner of my old Spider to ask if I could have first dibs on it the car if he decided to sell it, but each time I chickened out of sending it.” 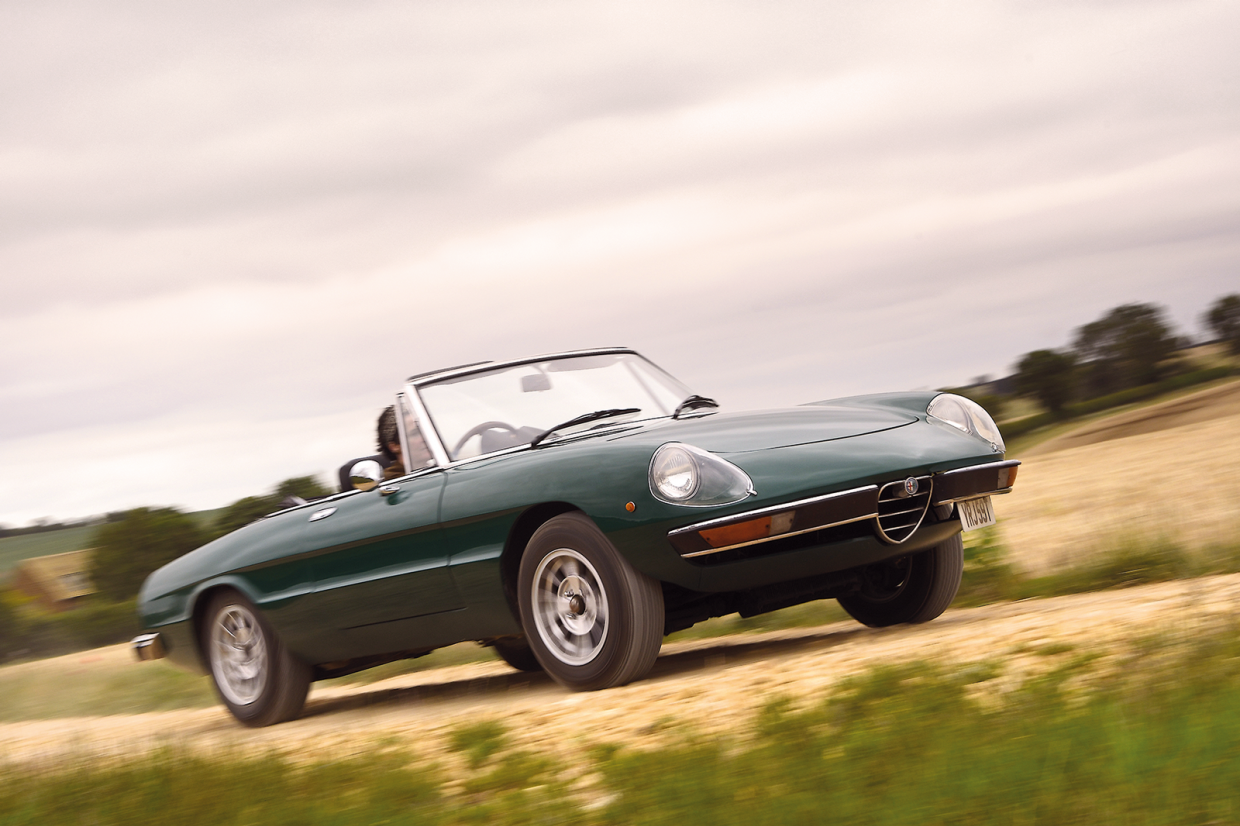 Just as it seemed as if the chance to acquire another Alfa might have passed, destiny stepped in.

“I happened to be in London, visiting my hairdresser, Biagio,” Paine explains. “He is a real enthusiast, and I was telling him how much I missed my old car.

“I met a friend in the park for a sandwich afterwards, and I was just saying goodbye when this green Spider drove past. I leapt into the road waving my arms frantically and shouting, ‘That ’s my car! That’s my car!’”

Incredibly, by pure chance the Alfa Romeo’s new owner happened to be passing, and he pulled over to have a chat: “Just at that moment a cyclist came past and said, ‘Nice Alfa’. I thought, ‘Yes, and that’s why I need it back!’” 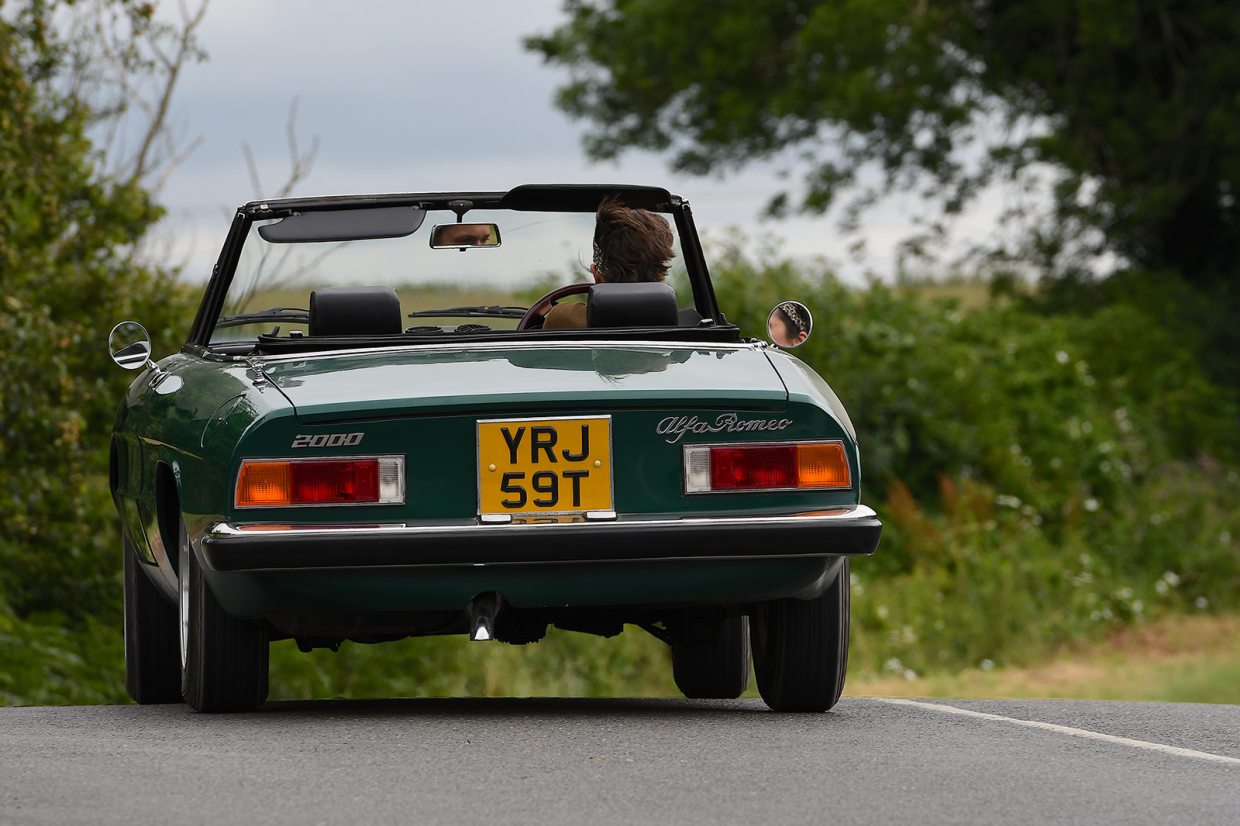 But that wasn’t the final piece of serendipity to strike Paine that day.

“I told him how much I missed the car and that I wanted it back, and was amazed when he told me that he needed to raise some money to fund the restoration of his Alfa Giulietta so had listed the Spider for sale the previous evening.

“It gives me goosebumps just thinking about it – if it had been a week later I would have missed the car. It was fate.”

With another potential suitor coming to see the Spider later that day, Paine immediately agreed to pay the asking price, returned a few days later to pick it up and has been floating on air ever since.

“I gave him £3k more than I sold it to him for, but he had spent £6500 over the past six years rebuilding the gearbox, replacing the crossmember and a few other things,” she says.

“It was a great deal because it drives much better now! And it’s just so pretty: every time I walk away from it, I glance back and think how lovely it looks.

“I’ve driven it more in the past four weeks than I did in the four years before I sold it, and it’s heaven on earth to have it back. The country roads around here are wonderful – they’re what the Alfa was made for and I can’t stop smiling.” 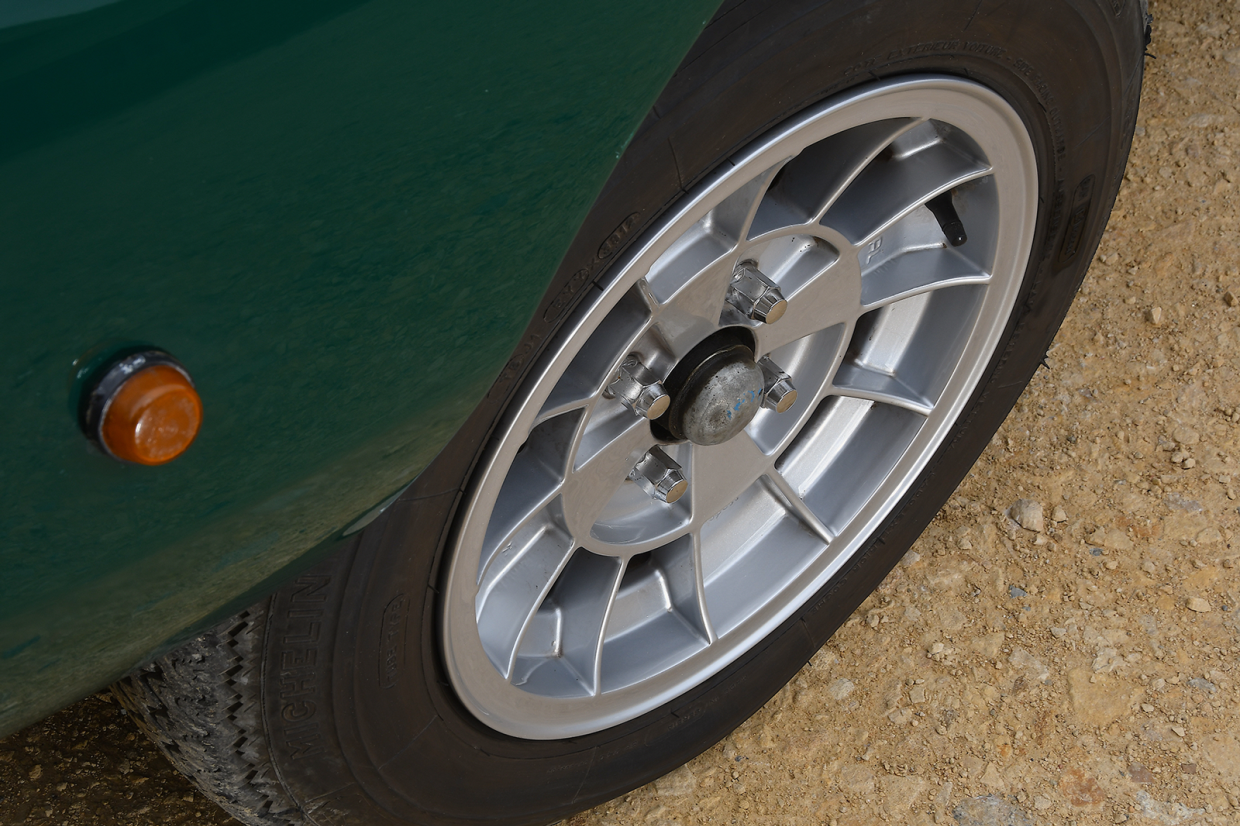 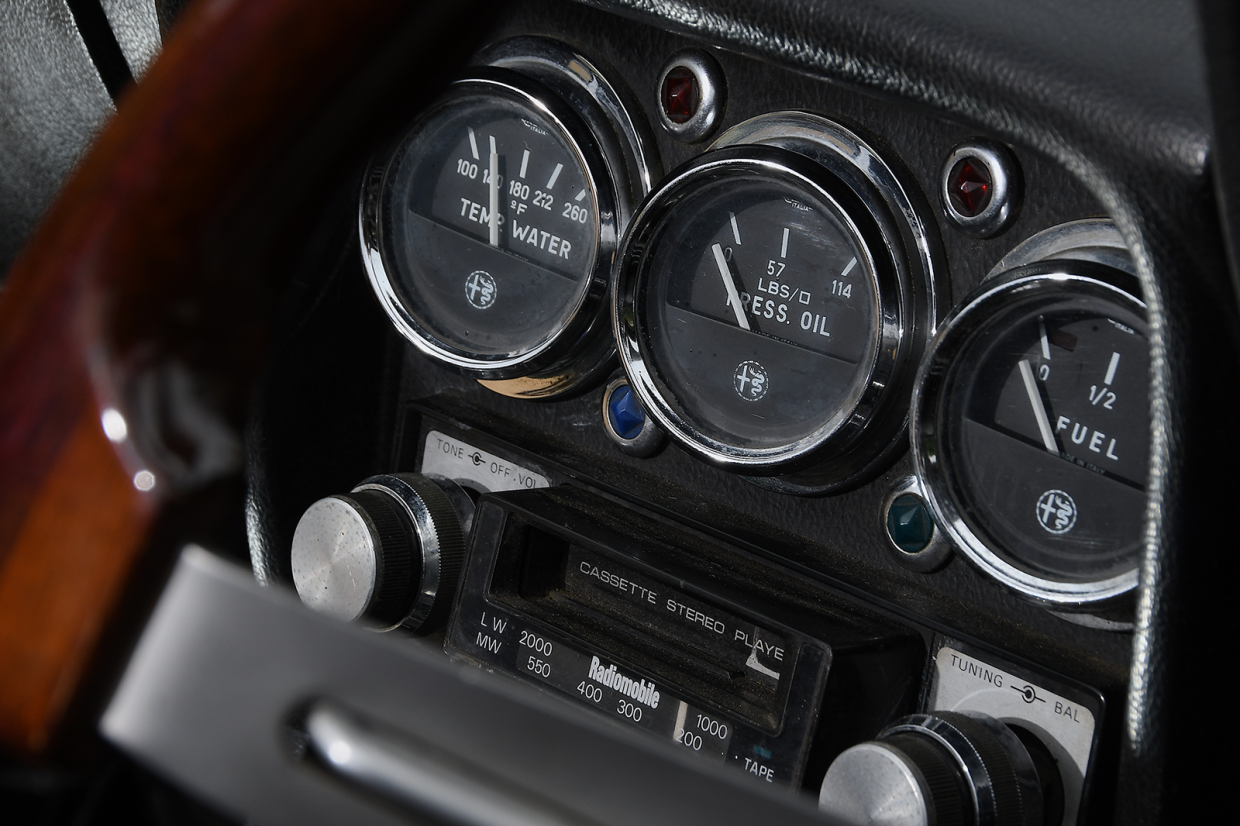 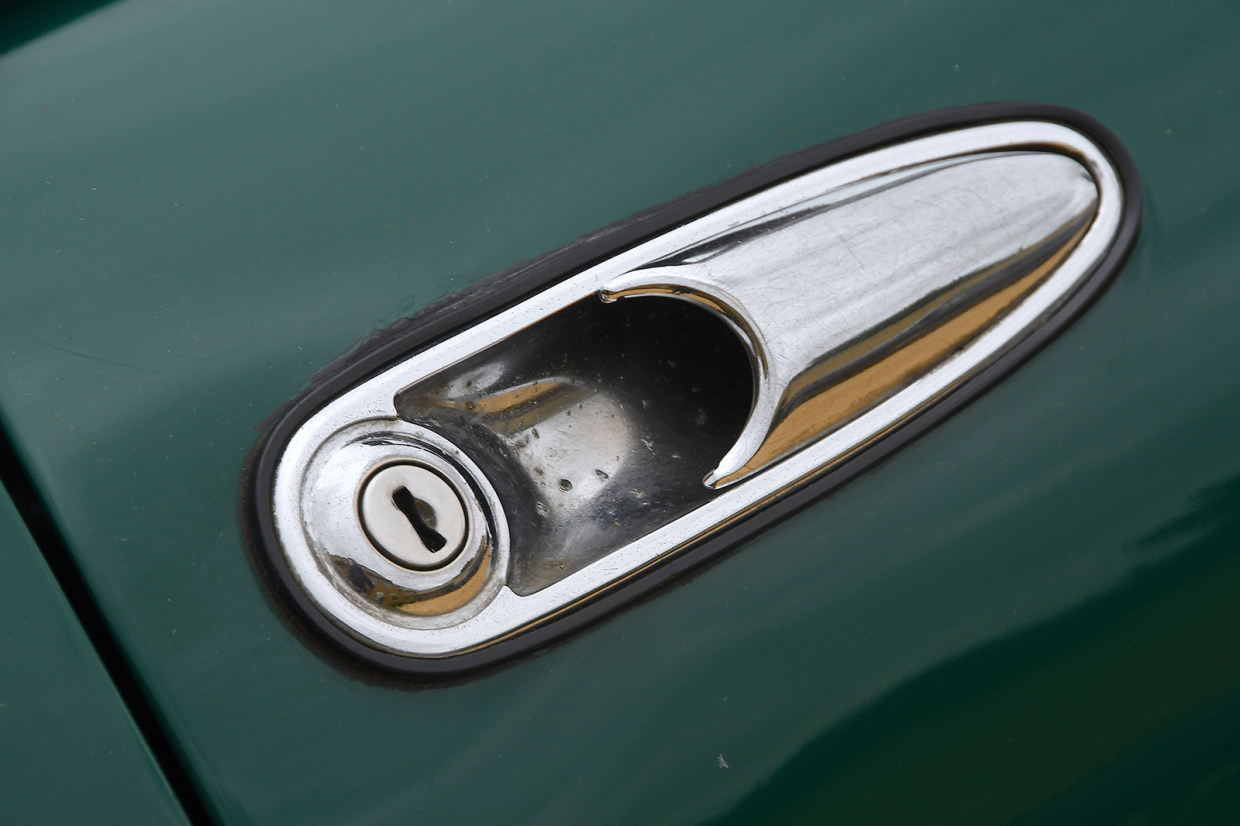 Although the Spider has had a few changes in recent years, most of them for the better, it’s still very much the car she owned and loved for three decades.

“The wheels have been replaced by period alloys, but I’m hoping to get the original steels back because I had picked out the details on the hubcaps in red, white and green.

“There’s no way I’ll let the Spider go now. My nieces are half Italian, so I’ve told them I’ll leave it to them in my will and they can fight over it.”

Whoever wins that fight will land themselves a lovely Alfa.

This is a car that is used and enjoyed rather than mollycoddled, so its 2-litre twin-cam is on the button and fires readily with just a blip of throttle to prime its twin Dell’Orto DHLA 40 carbs.

The reclined seats are comfortable, the view ahead evocative through the wood-rimmed three-spoke wheel to the two large, cowled Jaeger dials, the 8000rpm rev counter hinting at the eagerness of this archetypal Italian sports car. 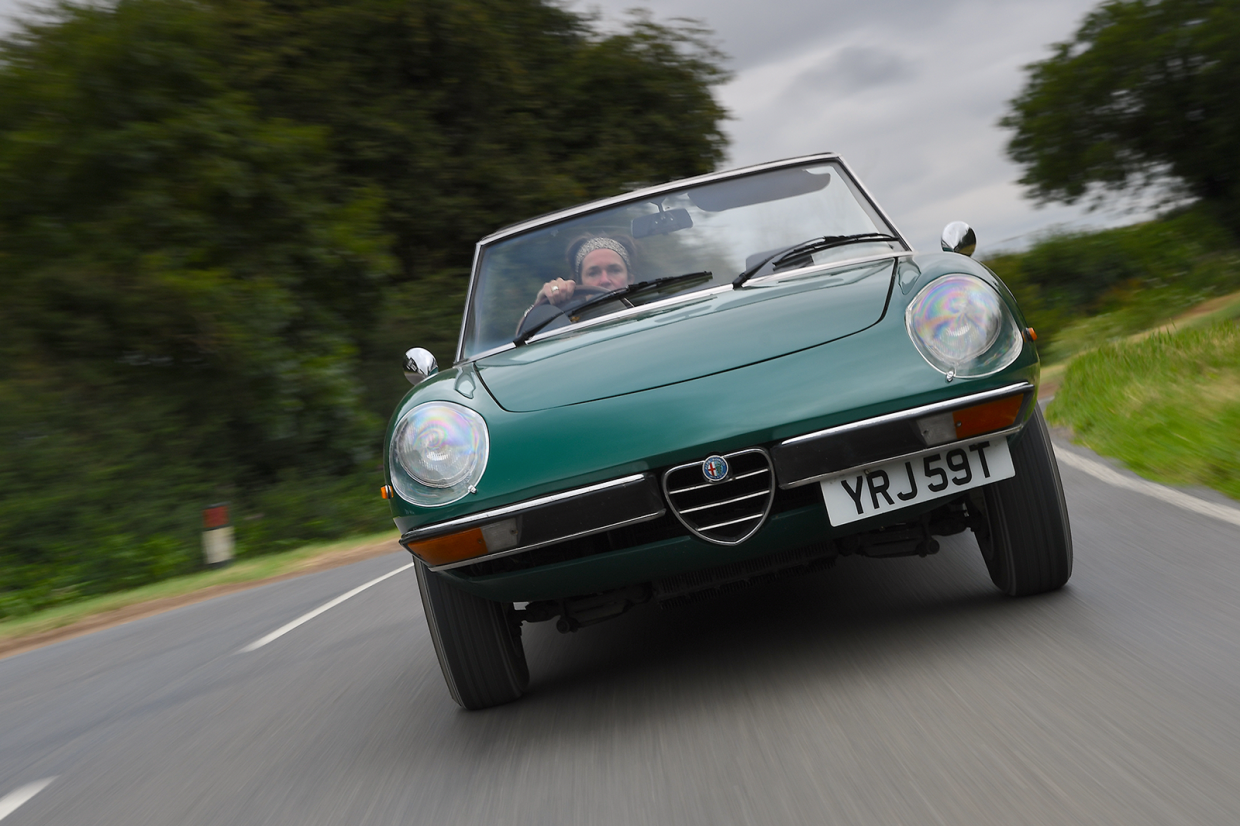 Building on the success of the 2000 and Giulietta Spiders, the long-running 105-series Spider was born in 1966 as the achingly pretty boat-tailed Duetto, styled by Pininfarina with a shape developed from the 1956 6C-3000 Superflow concept car by Aldo Brovarone.

That final engine arrived a year after the model received its first major facelift to produce the S2, such as Paine’s example with revised rear suspension and the squared-off ‘Kamm’ tail, and in this form it would run for more than a decade until the rubber-tailed S3 of 1982.

Still the Spider refused to die, soldiering on via another major facelift for the S4 in 1990 before finally bowing out four years later. 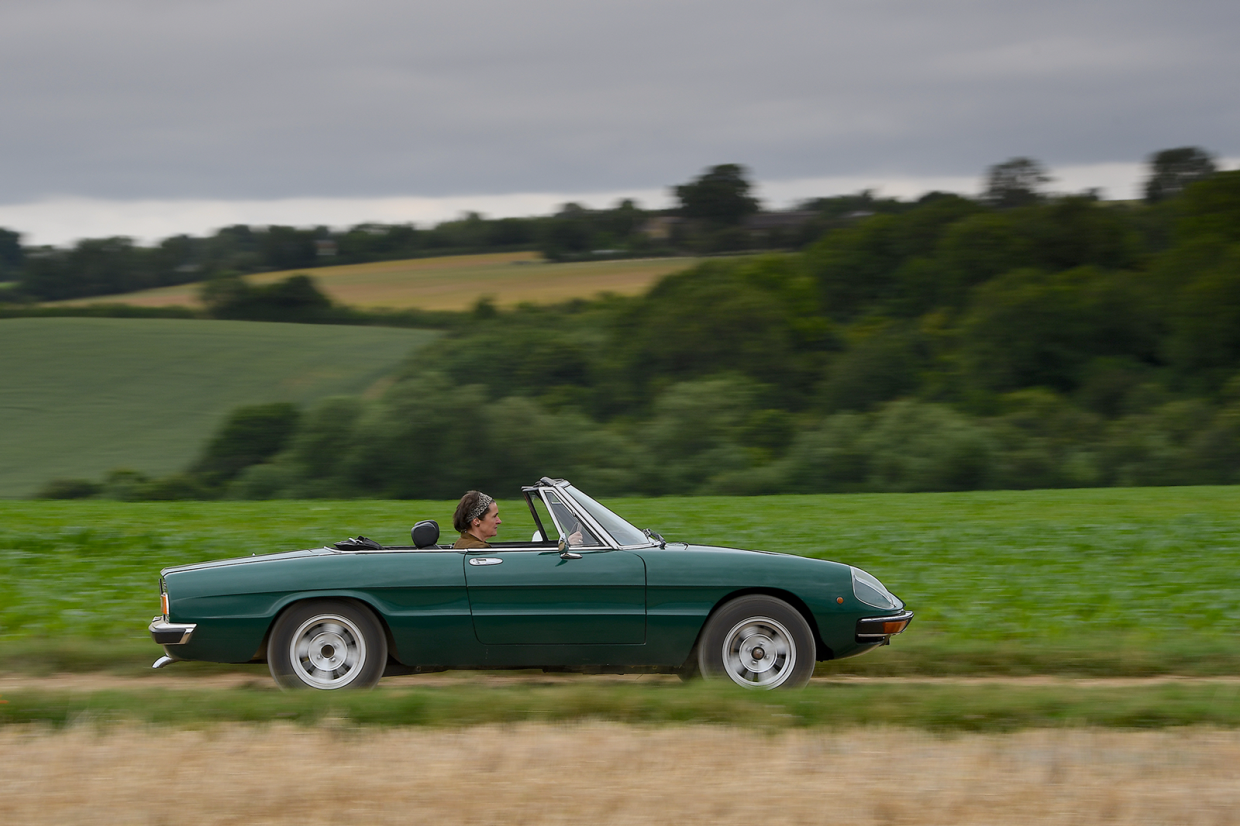 Many Alfisti cite the 1750 as the sweet spot of the Spider range, but this 2000 offers the perfect blend of torque and the sweet-revving nature so distinctive to the Alfa twin-cam.

Plant the throttle and the tail squats as the rasping 2-litre delivers genuinely rapid pace, its rebuilt five-speed ’box the smoothest I’ve experienced in a 105-series Alfa, while the accurate, well-weighted steering and supple ride are aided by sitting on period-correct Michelin XAS tyres.

Far from being in concours condition, the Alfa feels a little lived-in, with an ugly modern stereo mounted beneath the glovebox, but that older repaint still presents superbly and it drives as well as any Spider. 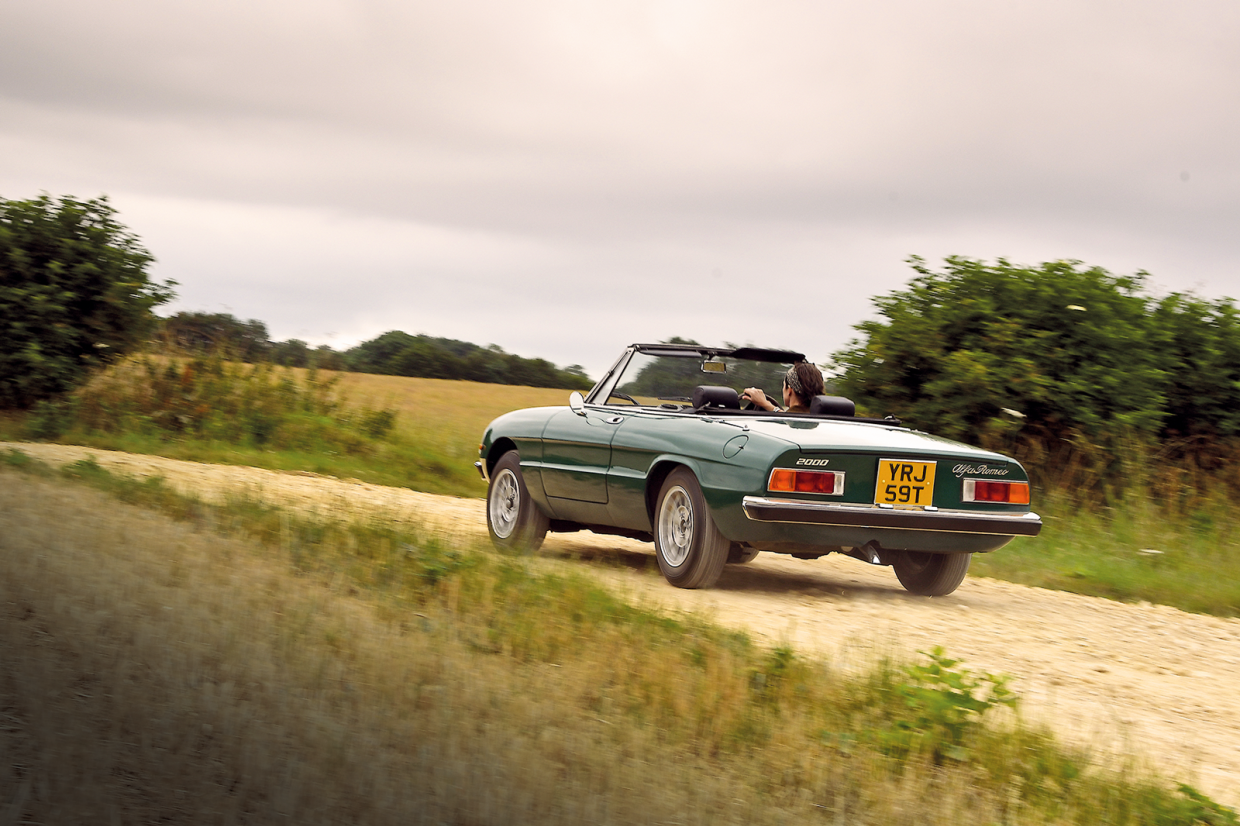 Paine has plans to convert the factory radio that still sits in the centre console to modern internals, and now looks forward to lightly fettling the car as she rebuilds her long-term relationship with it over the decades to come.

“It’s a fairytale,” she says, gazing back over her shoulder at the little Alfa Romeo as it cools in the driveway.

“The way it came back to me was quite unbelievable, and it still makes me smile every time I think about it.”

Thanks to David Stroud 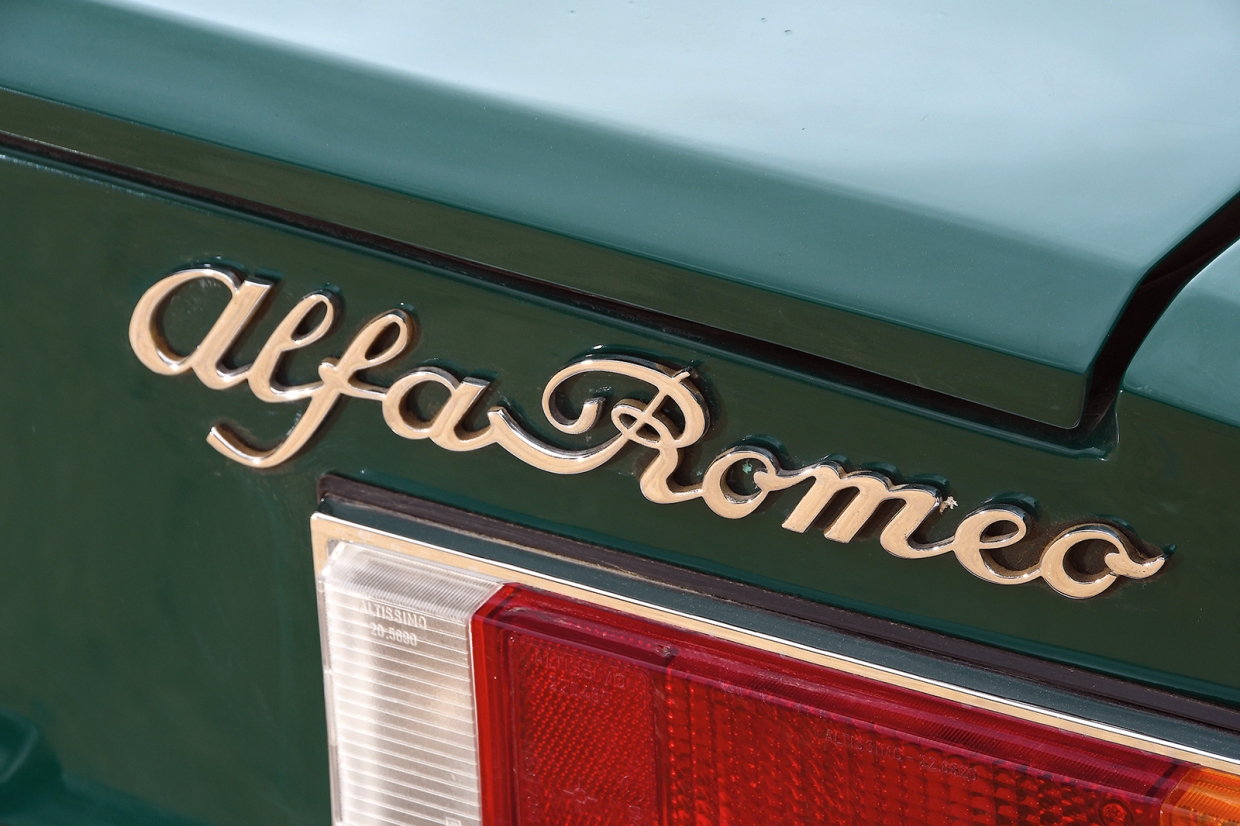 The art of Touring: Lancia Flaminia vs Alfa Romeo Spider 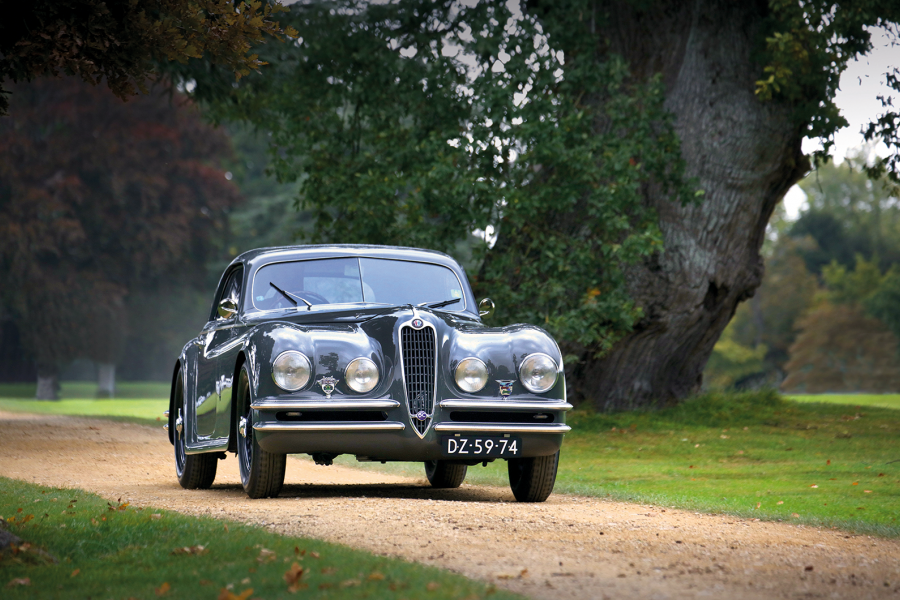 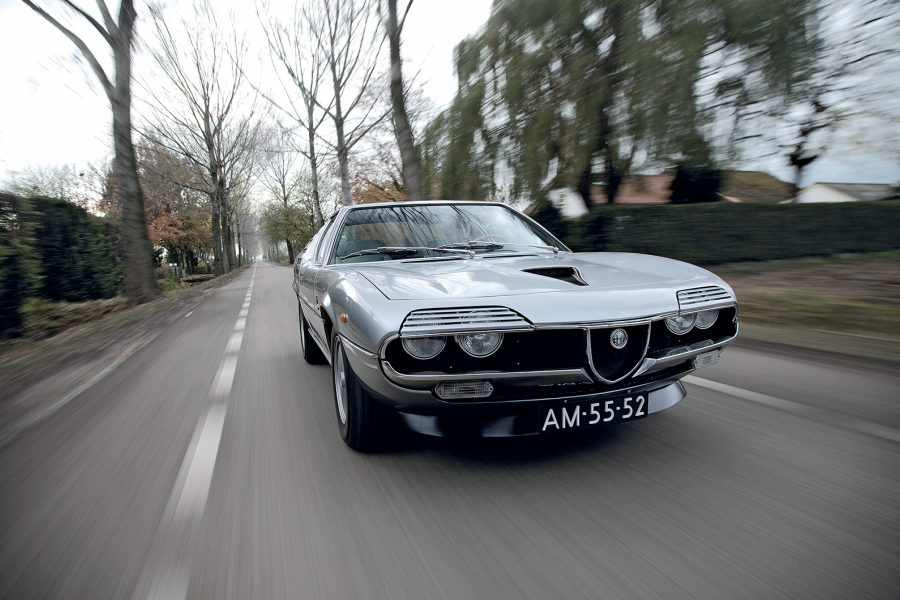 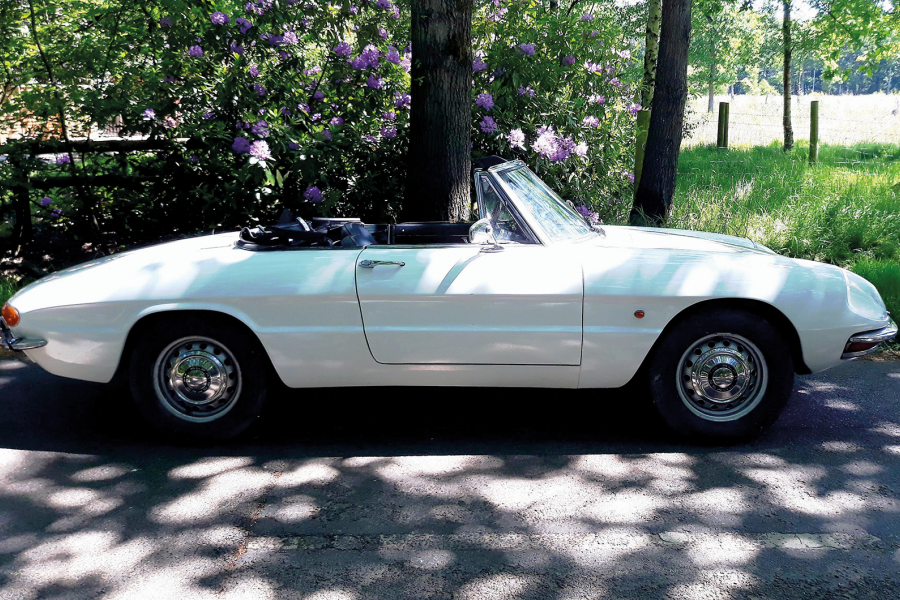 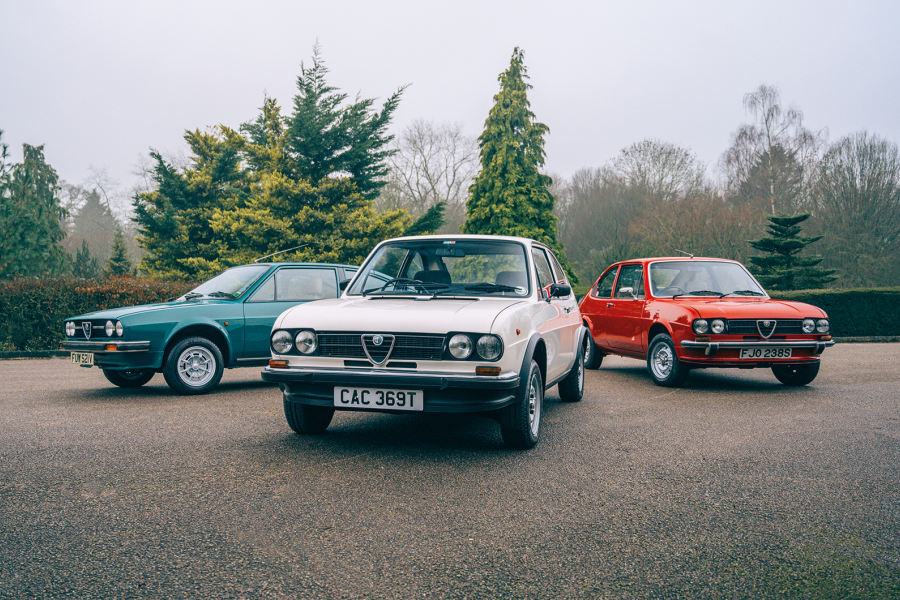