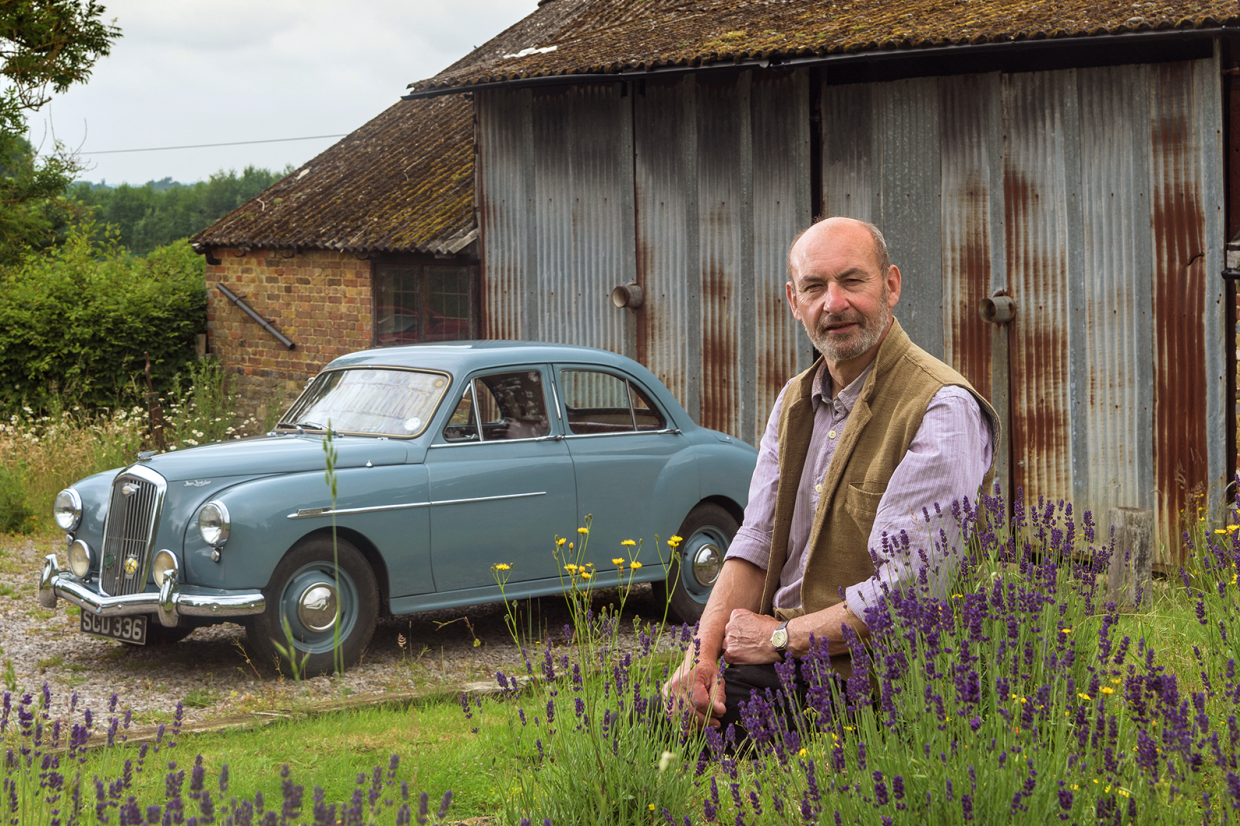 Stewart Payne’s neighbours offered him their Wolseley 4/44 in 1970 when he was learning to drive.

“It had been rubbed down for a respray that had never happened,” he recalls. “It had new sills but they were still in primer and just riveted in place. There was rust in the wings, the doors were different colours and the wheels different colours. It had a few months left on its MoT and they didn’t think it was going to pass its next one.

“So they knocked on the door and said: ‘If Stewart wants it, for 15 quid he can have it.’ I just loved it. All my mates were getting Minors, Minis or Austin A40s and this was different.

“It had a faded elegance to it. The headlining was sagging, the seats had collapsed, there was rust everywhere and it smoked like a chimney. But you sat in it and you still got that smell of leather, and the walnut dash, all the switches and dials…” 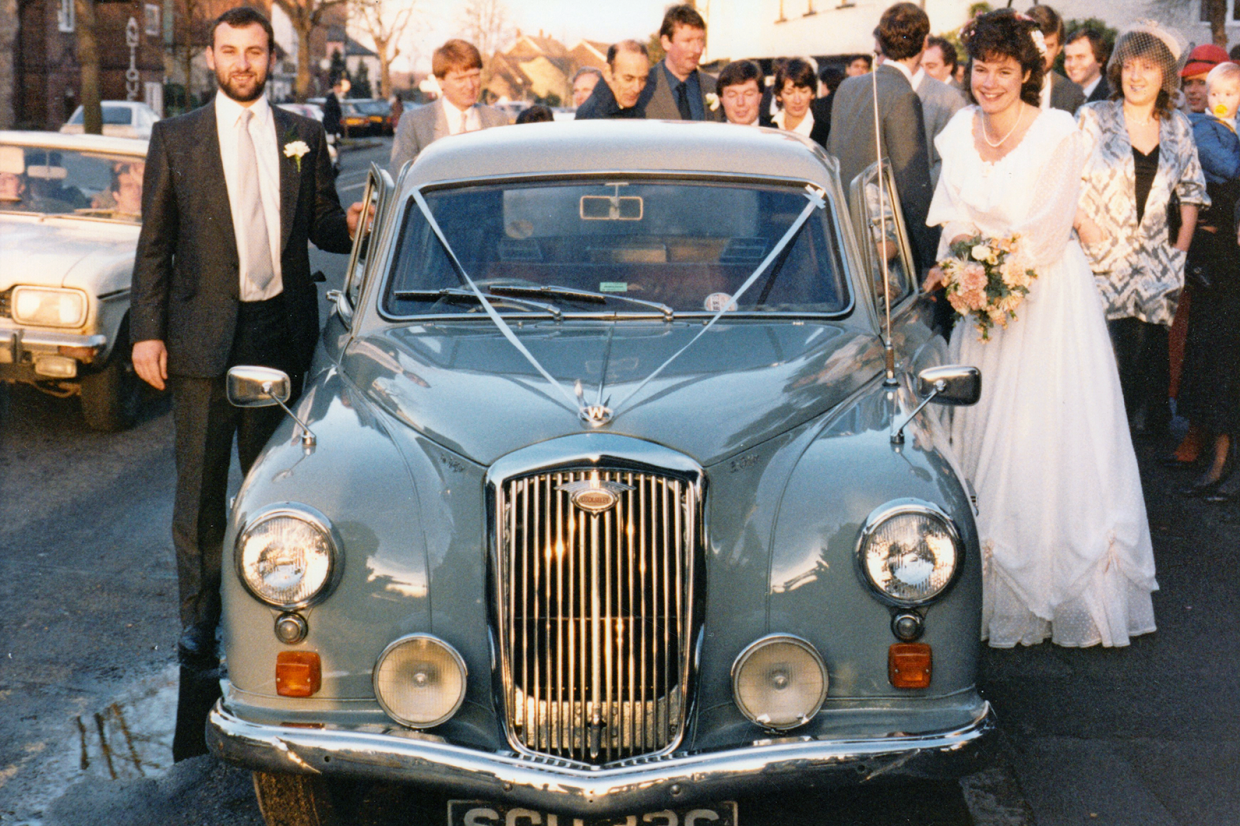 In February 1971 the Wolseley passed its first MoT in Payne’s ownership. Since then the 1956 saloon, with modest 1250cc pushrod engine, has been an integral part of his life and the many adventures along the way.

“It had about 120,000 miles on the clock,” he says, “and I reckon it’s probably gone around two and a half times now – but for several years the speedo didn’t work.

“In every adult memory, this car figures somewhere. I’ve had countless other cars since then, but this one has been my constant through my college years, my courting years, my marriage – when stubbornly it refused to start outside the church and I had to get out the handle.

“Wherever I needed to go, it took me – sometimes it took me there and didn’t take me back.” 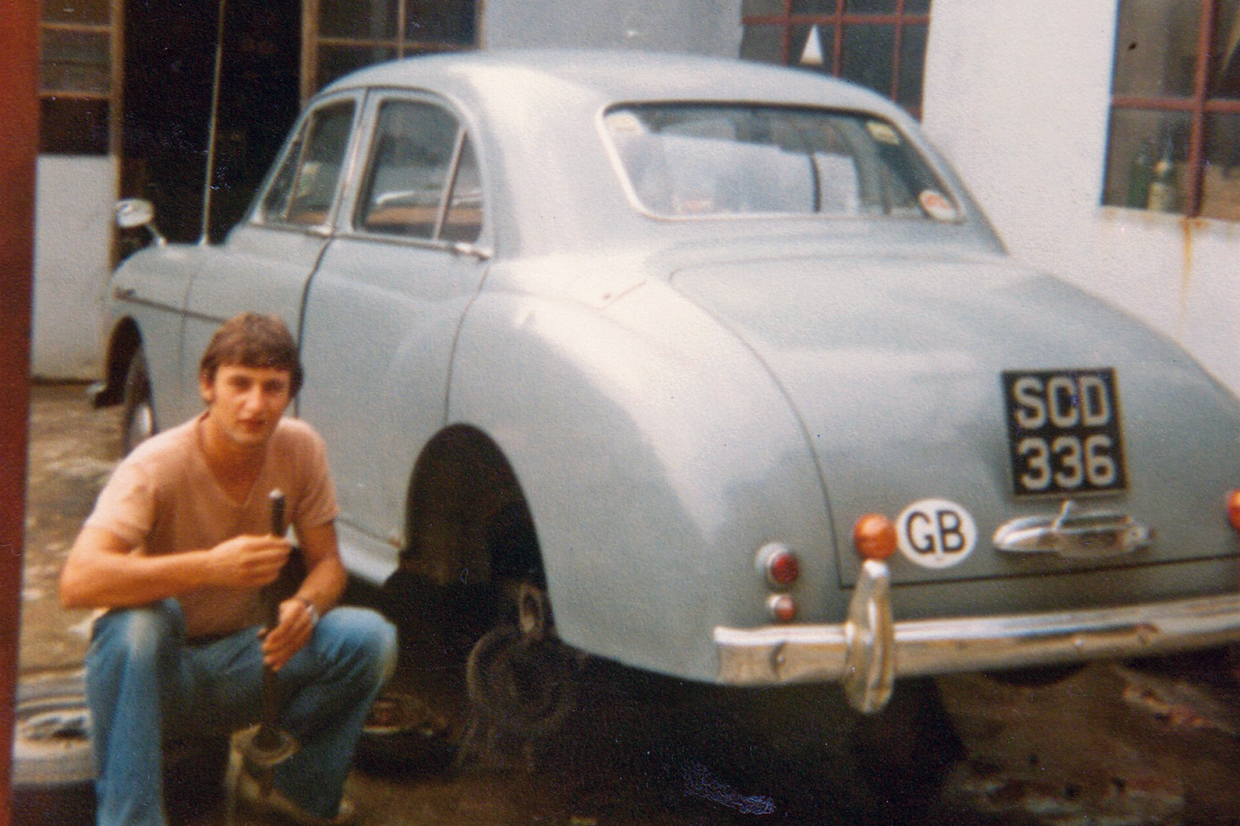 Part of the reason the car has survived, says the retired Surrey-based journalist, is because in the early days he and his father ensured it was properly maintained – with professional help when needed.

“The appearance never mattered to me in the slightest,” he admits. “It was full of filler, and my Saturdays were spent with a tub of Isopon. I’d go to Halfords, buy a tub and fill in the holes that had appeared in the week.

“It was mechanically fine. I knew that if you didn’t do the basics you were going to be let down. My friend’s family ran a garage in Ripley called Methold Engineering – proper engineers. If Chris hadn’t been one of my best mates from school it would have been much harder to keep what was really a wreck on the road.”

This was necessary, because the 4/44 was Payne’s transport when studying in Sheffield and later when he was a cub reporter: “Nobody else had a car like it. I remember weekends out on the Yorkshire Moors with eight people in the car. Then in my first post, on a local paper, I would often go out on a job in the Wolseley.

“Basically, it was used as my everyday car until about 1976/’77. But after that some of the cars I had weren’t very good, so I still used the Wolseley.” 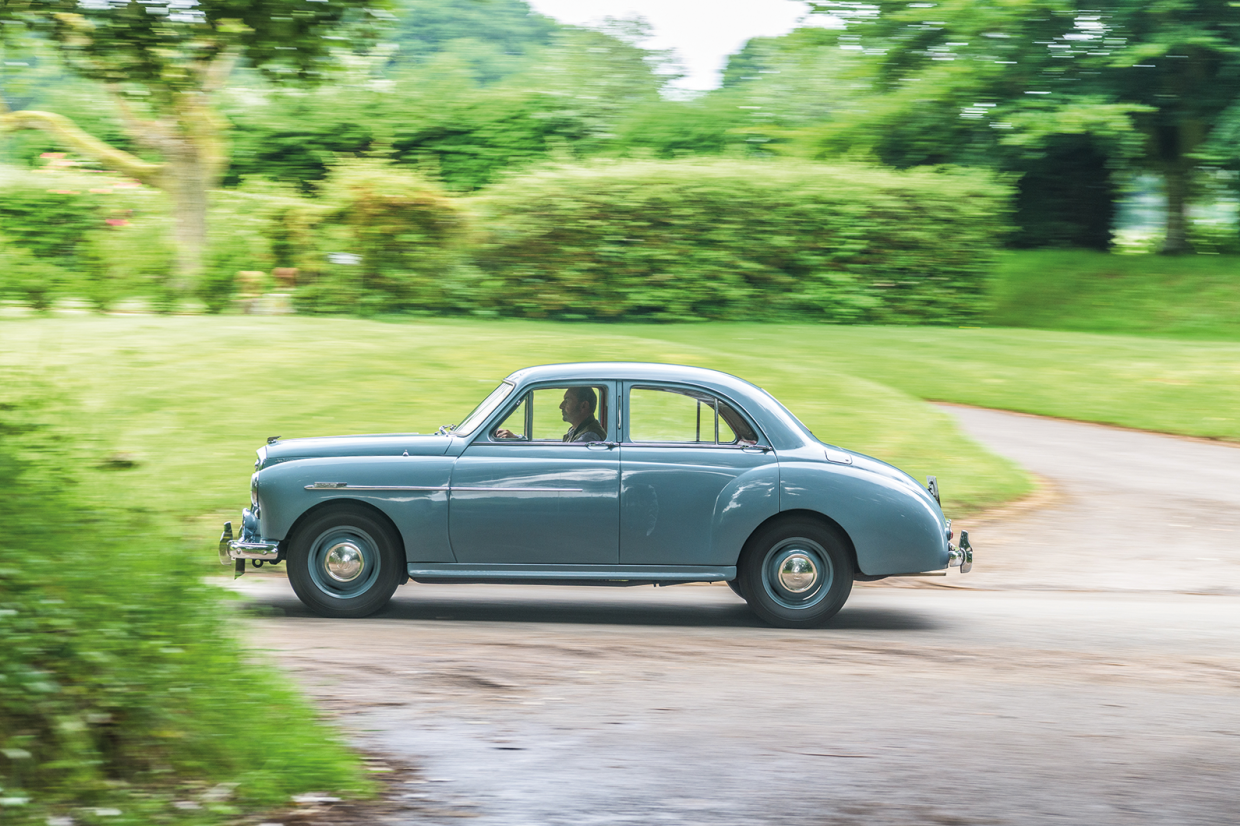 Unsurprisingly, Payne’s richest experiences with the car were in his youth.

“As a student, I recall breaking down after I’d just come off the M1. My dad came out in his Wolseley 1300 and towed me all the way from Rickmansworth to Woking, by which time his rear subframe was virtually hanging off.

“We’d had to wrap the tow-rope around the subframe – I think he ended up with a bigger bill to sew the 1300 back together than I did to get my Wolseley back on the road.” 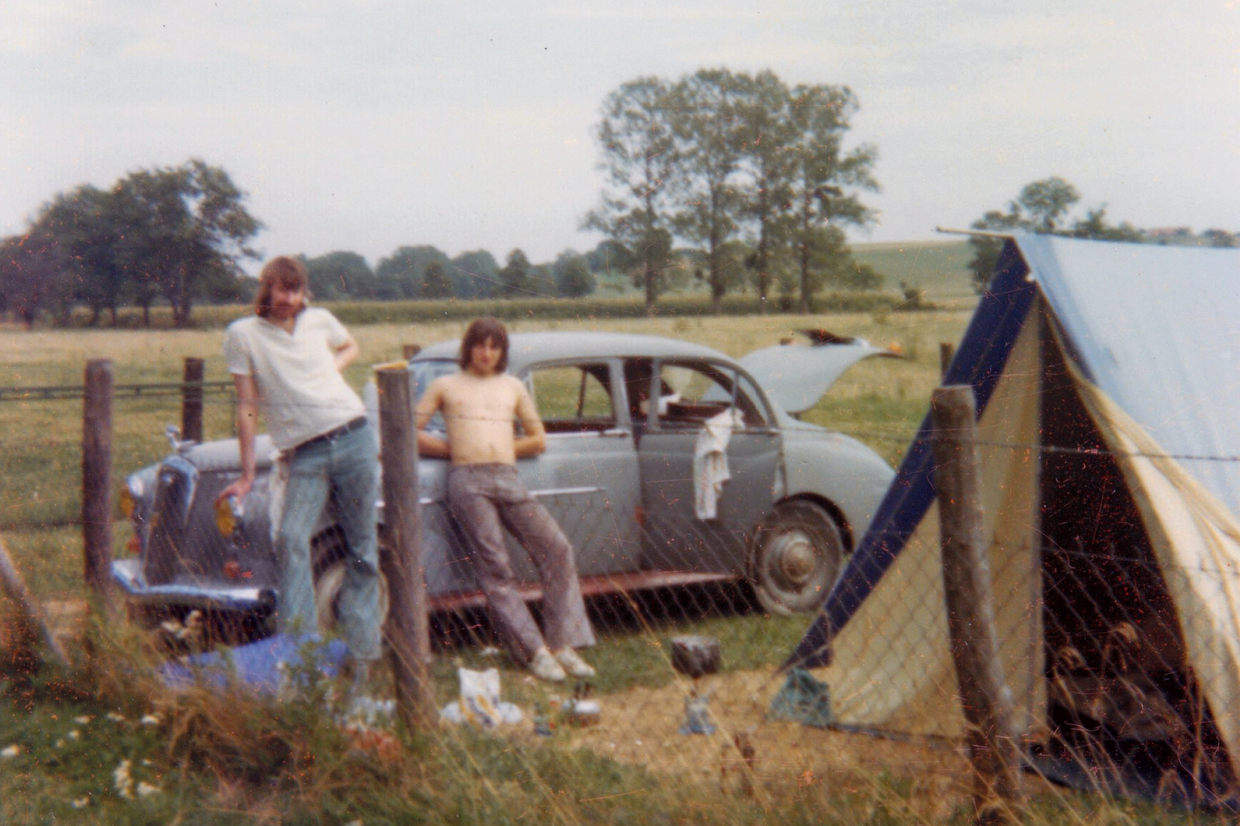 Payne and Wolseley on a camping trip to France in 1974

Then there were the sundry long-distance escapades: “The first holiday I went on with the Wolseley was the year after I got it, to the Scottish Highlands. I’ve been around Europe in it many times.

“In 1975 I had to bring it back from the shores of Lake Garda, where it had broken a halfshaft. I had it towed to a nearby garage and phoned my dad, who said: ‘Leave it there. Scrap it. I’ll settle up with the garage. It’s not worth bringing back.’

“I refused, and came home by train with my girlfriend. I went to a scrapyard – you could still find Wolseleys in scrapyards then – extracted a halfshaft, and then with a Wolseley 4/44 halfshaft as hand baggage I flew back to northern Italy. I turned up at the garage, they fitted it, and I drove back home.” 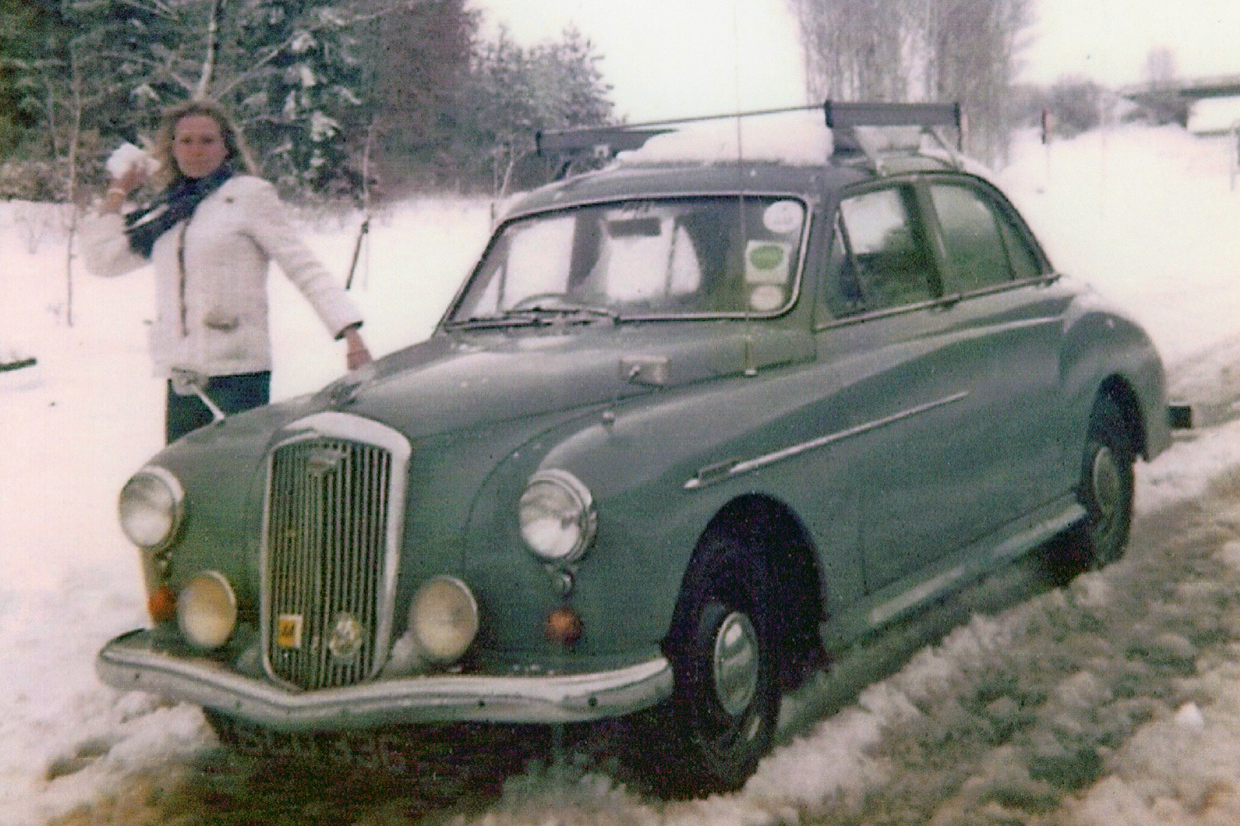 He continues: “I remember one trip to Europe, around 1974. I was with two mates – both of them big blokes – and we were camping, so the car had a loaded roof-rack.

“We went down into what was then Yugoslavia and into Greece, but going over the Alps it kept overheating. I had taken the radiator grille off to try to aid the cooling. I’m not sure it made any difference at all, and I later discovered half the radiator was blocked. But we went all over Europe with my mate in the back seat clasping a chrome radiator grille.

“Of course, the Wolseley had that illuminated badge on the grille. So when I took off the grille I’d wrapped the wire that takes the current to the badge around a bit of bodywork. Then it started to rain and get dark, so I put the lights on and the electrics immediately shorted.

“The dials were all broken and there was no speedo, just the hole in the dash where it should have been. Smoke started coming through the hole, because the wiring had caught light. In my panic I stopped, and for some reason I ripped out the ignition key and chucked it out of the window.

“When I’d realised what the problem was and had put a bit of insulating tape over the wiring – although it was a bit scorched everything worked – it took us about three hours to find the keys, which I’d thrown into the undergrowth halfway up an Alp. 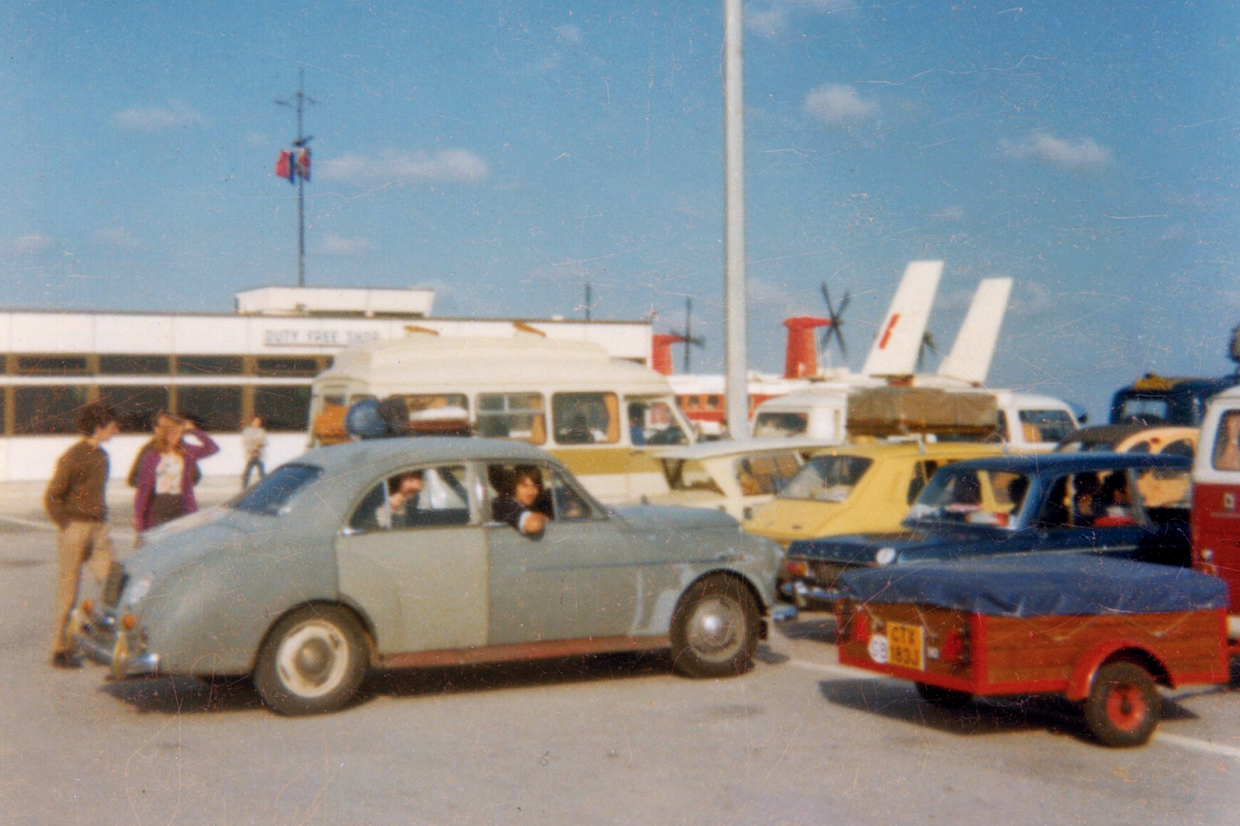 Patchy Wolseley front and centre in a scene from Dover, circa 1974

“Another time I was going to the Munich Beer Festival and a valve stem snapped on a German motorway. That meant that the valve dropped down and got smashed through the top of the piston. That was the end of that journey.

“I made an emergency phone call and a family-run garage came out with a tow truck. They put us up for three days while I tried to locate a spare valve and piston.

“I couldn’t, so they put us on the train to Munich and eventually I went back to England by train, found the parts, turned up in Germany and they fixed the car and I drove back.

“They sent me Christmas cards for years. Stories like that explain why I’m so attached to the car.” 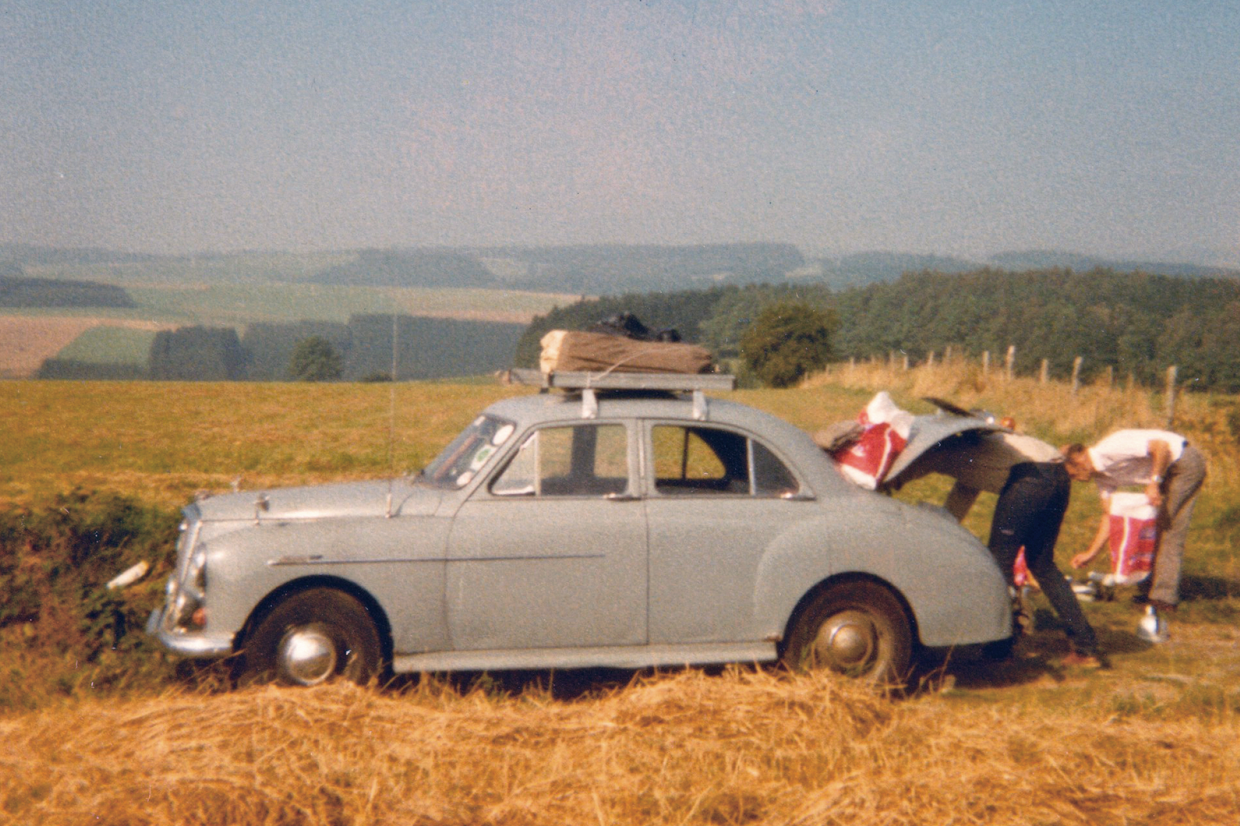 Making a brief stop-off on the way back from Munich

Along the way the Wolseley has had a full engine rebuild, in 1974, and a retrim and new chrome in the 1990s. Otherwise it has been left untouched, but for regular servicing and remedial body repairs.

So what motivated Payne to hang on to the car?

“I think it was because it was different,” he says. “That faded glory, that subdued elegance – and because in its decrepit state it had no value whatsoever, so scrapping it wouldn’t have earned me a penny. I never intended to have a classic car; it just became one.”

Payne’s youth experiences mean that he has become well-versed in basic mechanical work: “Out of necessity you become an amateur mechanic, because you don’t have much money and you need to keep the car going.

“I know exactly which bit to hit with a hammer; if the fuel pump stops ticking, you go and give it a clunk. The float needle jams? A little tap on the carburettor and chances are that will solve it.

“There’s a confidence, too, in driving a car that you know so well, and knowing that if something goes wrong you can probably fix it by the roadside. Everything makes sense. You can open the bonnet and see how everything works. I don’t get fazed by it because there’s hardly a job I haven’t had to do on the car.” 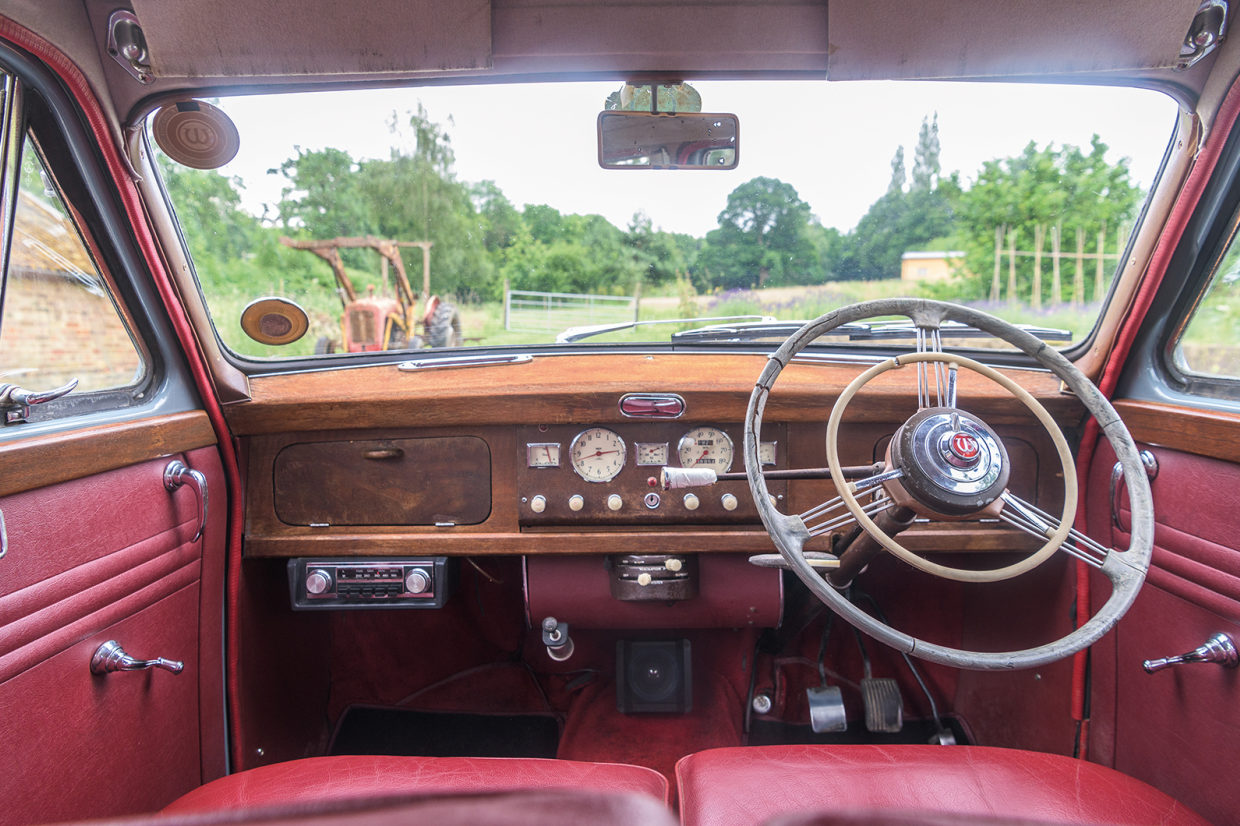 The seats were re-made 20 years ago, and new carpets fitted

Three years ago the Wolseley was fully rebuilt.

“It had reached a point where our village mechanic said he was really struggling to find anywhere to put a weld that was anything like decent metal,” says Payne. “So I decided this was the point where I had to start spending some serious money.

“At the same time I was diagnosed with a major cancer. I realised I needed to get something done, because I didn’t want the car to become a problem for someone else. I didn’t want my wife to be left with a pile of rusty metal that wouldn’t be worth anything. 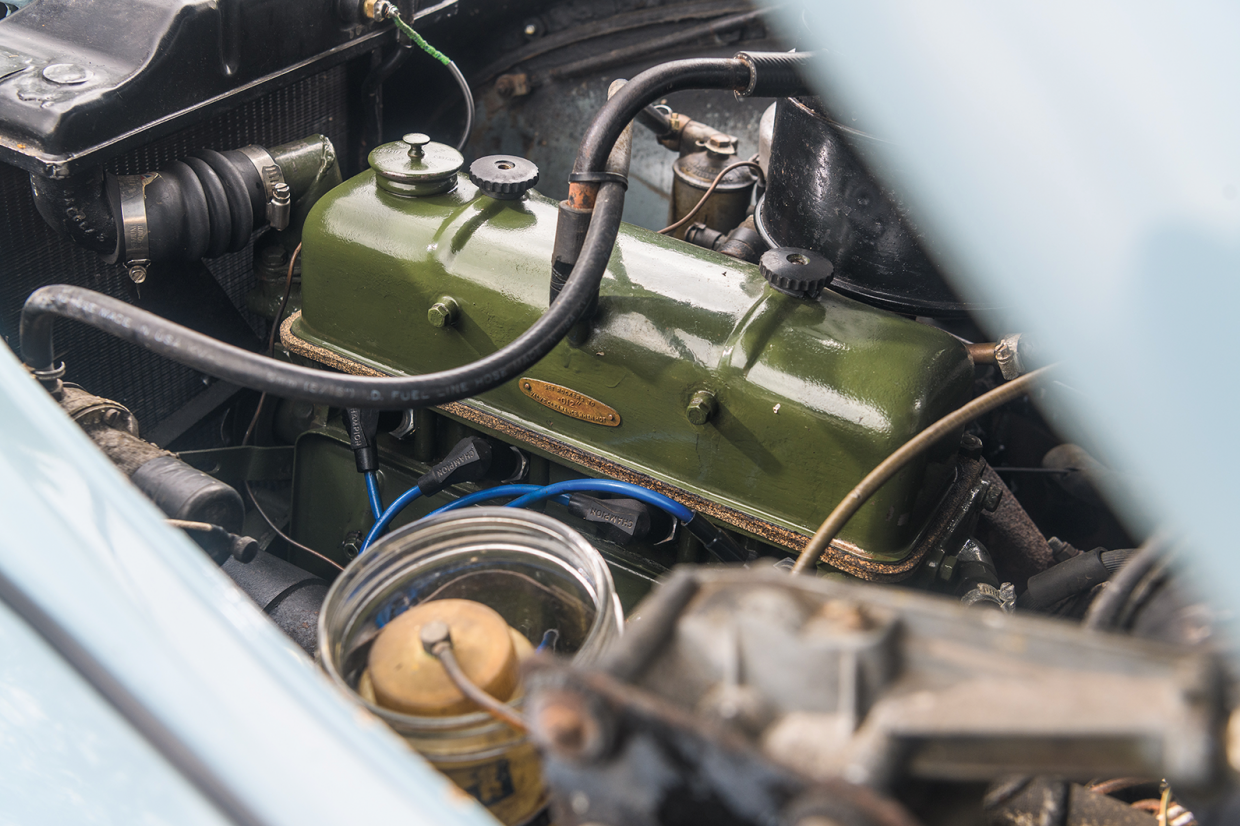 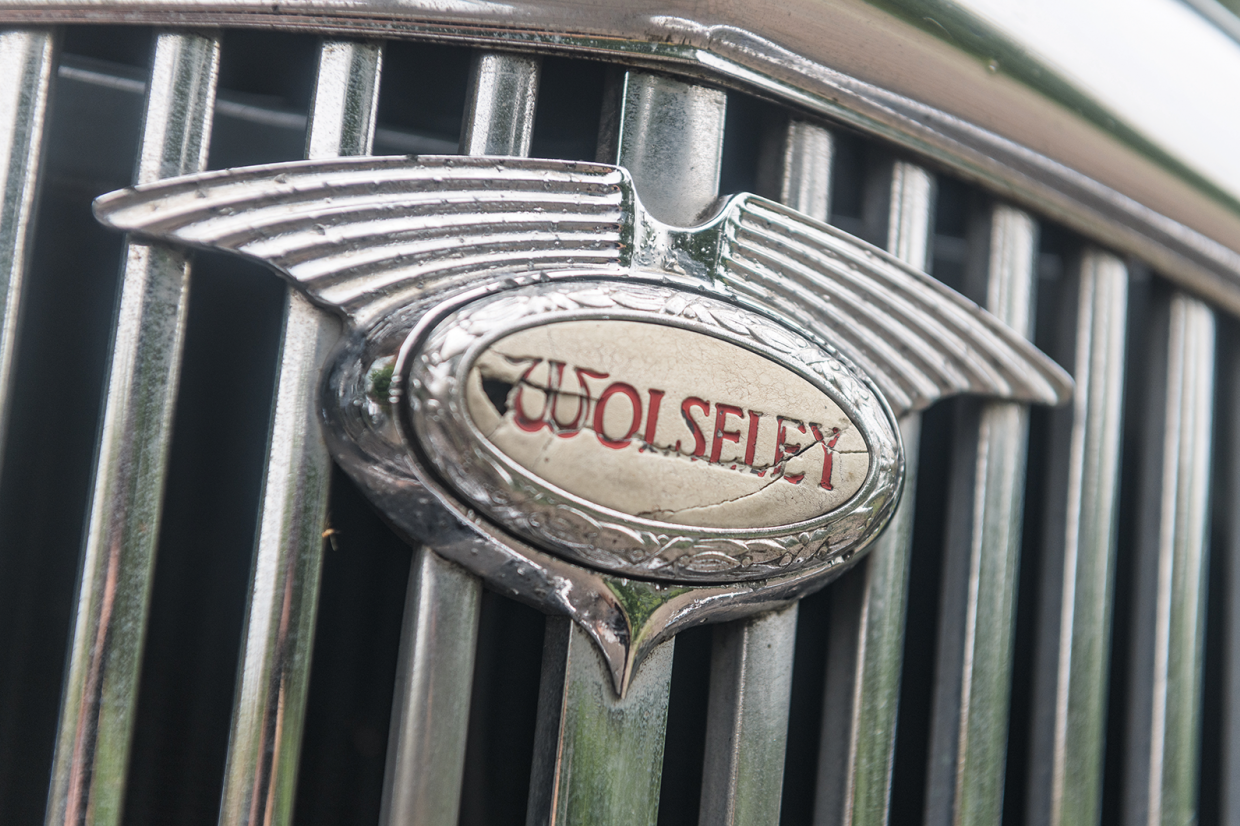 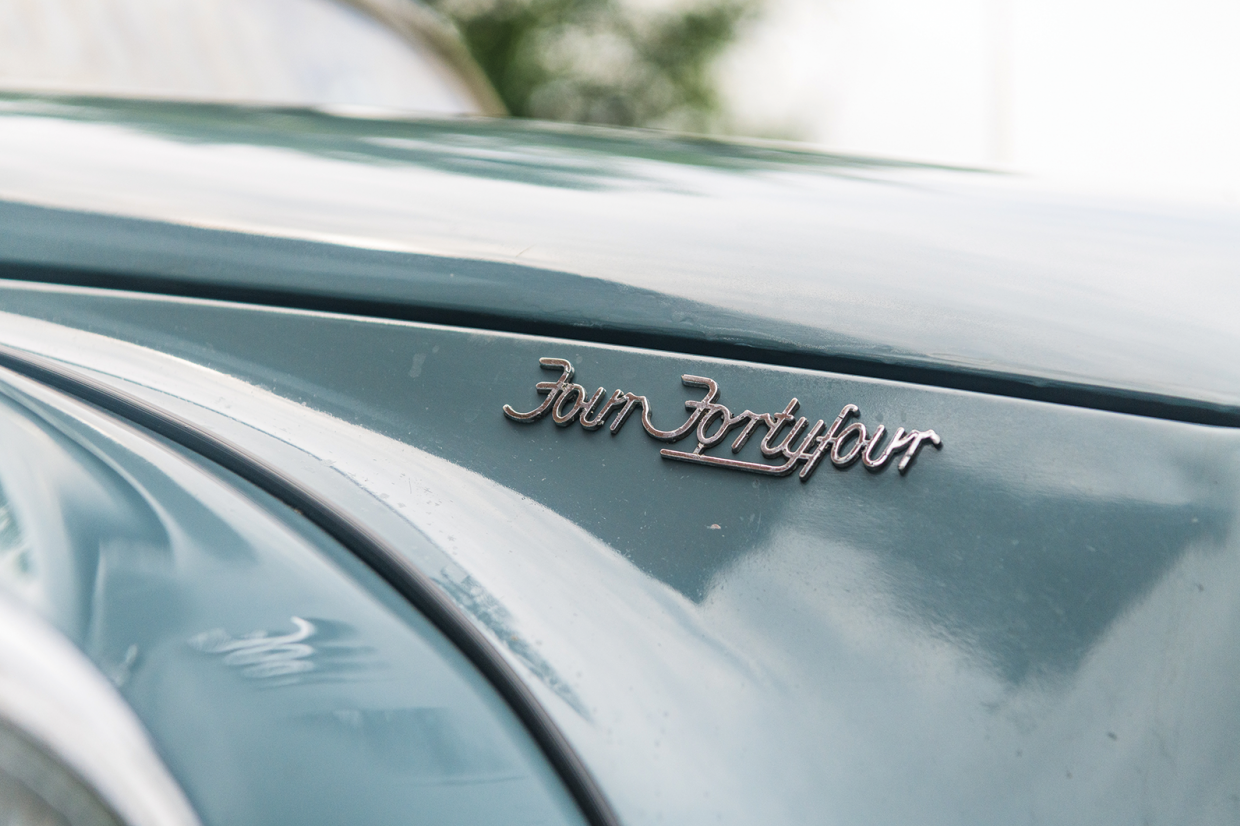 The engine has been rebuilt twice but the ’box, steering and rear axle never touched

One-man specialist Luke Wells of Shere put in new floorpans, wing inserts and sills, and resprayed the car. A friend in the local vintage motorcycle club rebuilt the engine, and Payne’s former pub landlord, an ex-BT engineer, carried out a rewire.

“It was stripped down but not completely taken apart. It was the rebuild I could afford,” says Payne, who out of principle has resisted, for example, refinishing the faded interior woodwork: “It’s still got all the knocks, bruises and scars that make it my old car.”

Payne, a member of the Wolseley Register and the Wolseley Owners’ Club, has since started to show the 4/44 at rallies and local events.

“I’d never felt it was worth taking to a classic car show because it looked like a pile of rubbish,” he says. “But more recently I have, I’ve felt it’s putting something back.

“The Register has a spares coordinator for each model and they’ve always been prepared to answer any questions. The clubs exist to help and they need the support of all of their members.” 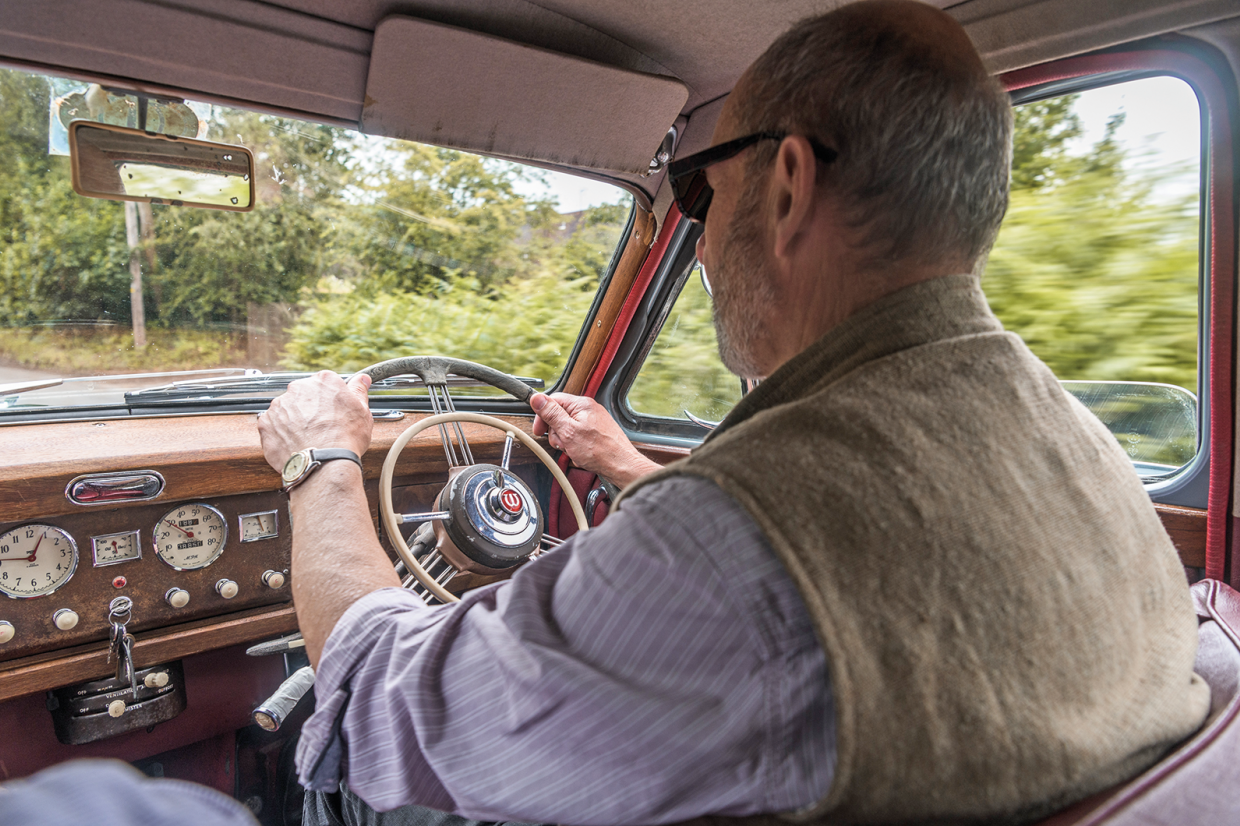 Payne has always kept the Wolseley on the road and he still uses it several times a week.

There’s even a trip to Europe in prospect: “I get pleasure out of driving it. You have to drive them – the job isn’t done for you. I have to double-declutch because it’s the original gearbox and there’s no synchromesh left. But then I took my test on a Fiat 500 and that had no synchromesh in the first place, so I’ve not missed it.

“It’s also ridiculously underpowered. They were used as police cars, and I’m sure any burglar could have run away quicker than any policeman could have given chase in one of these. 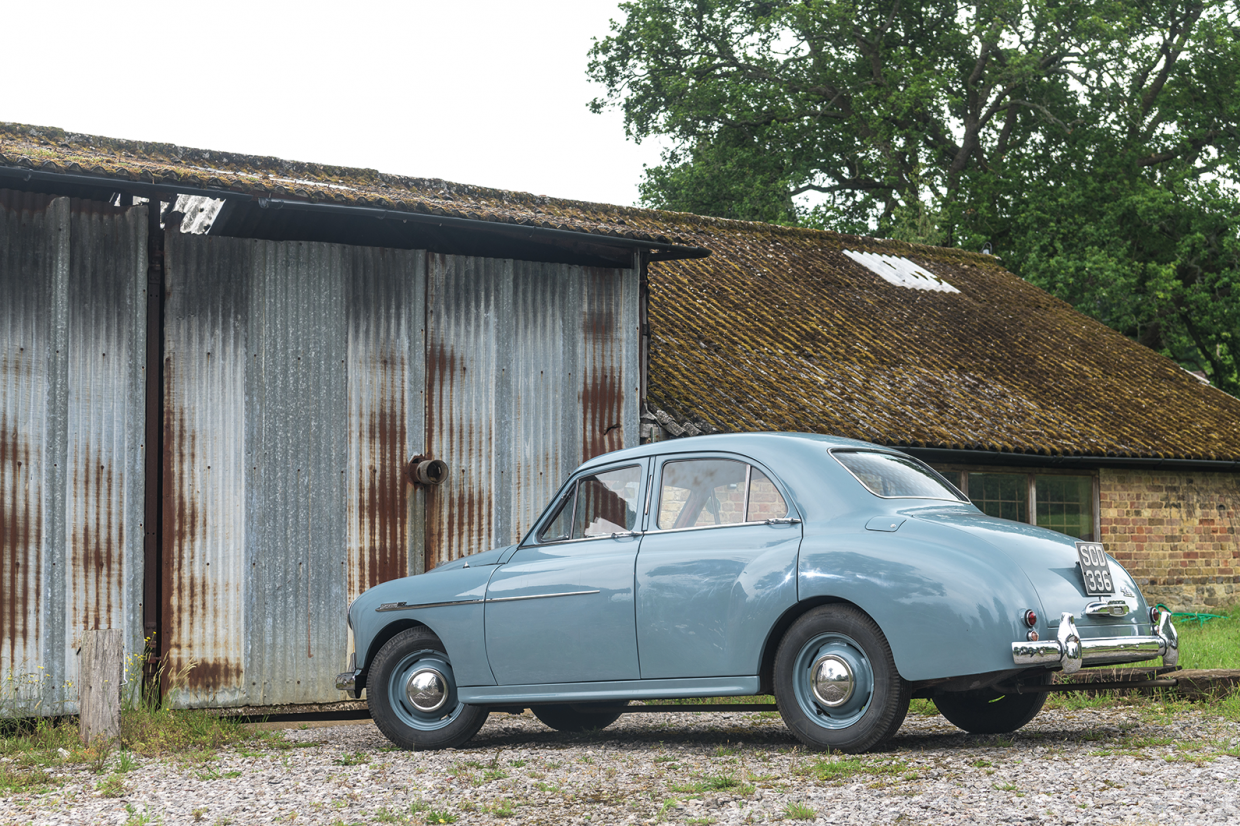 “I find it totally relaxing all the same. I’m at ease driving it, because I know there are certain things you can’t do. You’re consigned to a steady 55-60mph, for example, and that somehow puts you in a better frame of mind.

“It just lollops along. Once you’ve got it going, then as long as there are no hills in the way you’re fine.

“There’s something very rewarding, too, about still driving the car that I’ve had ever since I learned how to drive.”

One man’s mission to restore a Riley One Point Five 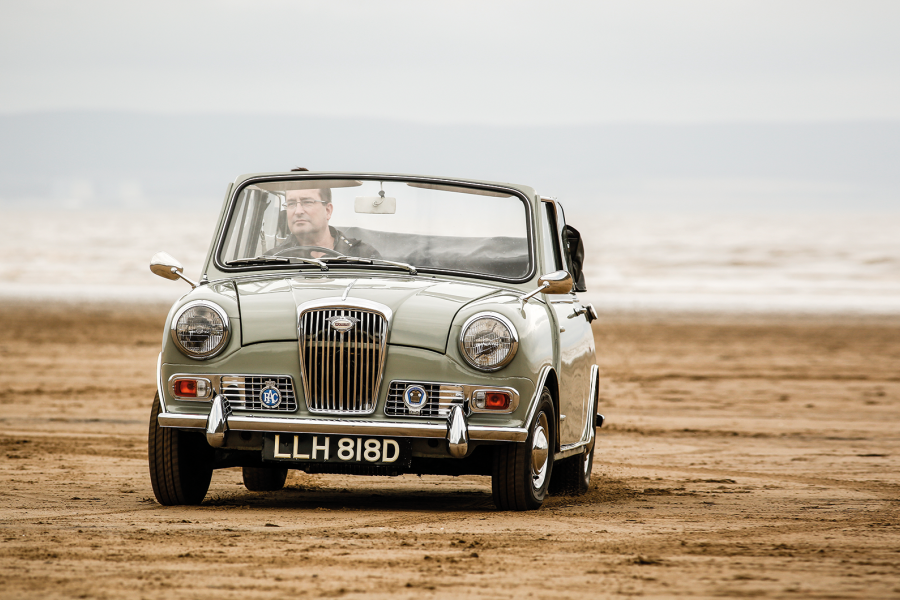 All souped up: Heinz’s Wolseley Hornet 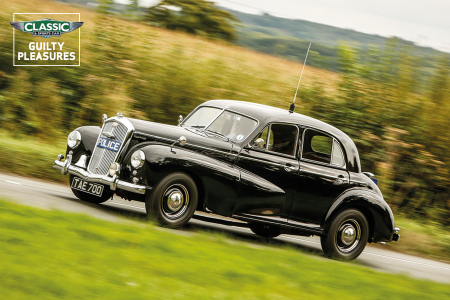