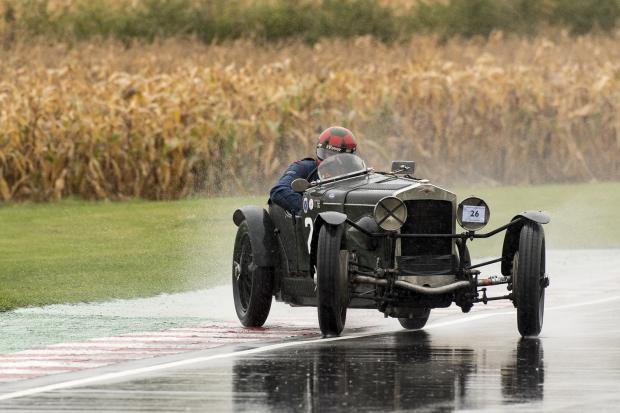 And it was still raining when the VSCC’s Formula Vintage grid lined up to start the day’s racing. Patrick Blakeney-Edwards (Frazer Nash Saloon) fell back to sixth from pole, Tom Waterfeld (Frazer Nash Super Sports) into the lead from the front row, with Mark Gillies (Aston Martin Speed Model) and Christopher Mann (Alfa Romeo Monza) in hot pursuit.

Gillies took the lead at Bobbies on lap two, the Aston and Waterfield’s ‘chain-gang’ Frazer Nash switching places while tussling for the top spot several times over the opening laps, while pulling away from the rest of the field.

In the end, Gillies was able to get ahead and stamp his mark on the race, easing to a 6.4 sec lead over Waterfield by the finish, Mann 46.6 sec further back in a lonely third. 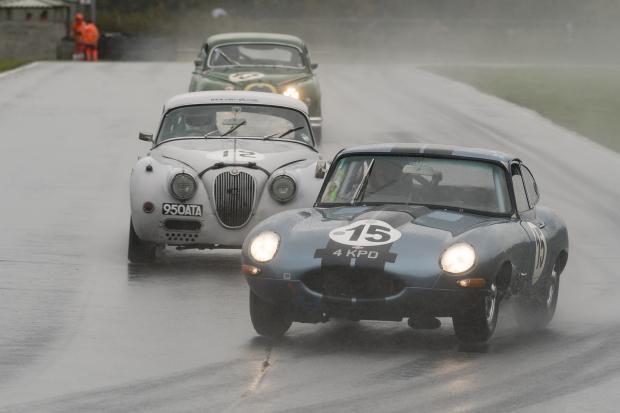 Next was the Jaguar Enthusiasts’ Club’s 30-minute Norman Dewis Trophy for pre-’66 Jags. With the rain still falling, Julian Thomas took his E-type into the lead from polesitter John Young’s Mk1 and Tom Butterfield’s Mk2.

Butterfield slipped to fifth with an off at Quarry. He could only fight back to finish fourth, as a patient but committed drive from Andrew Keith-Lucas in his mother’s XK150 saw him secure the final podium spot, having started ninth and dropped to 11th on the first lap. Young won, Thomas second.

There was a clear dry line when the Phil Broster Memorial Race for Healeys got under way, Bruce Montgomery leading from pole in his red Mk2 3000 with the white roof, Mike Thorne (100M), David Grace (3000 Mk1) and Oliver Chatham (3000 Mk1) dicing for second.

Chatham later commented that in such conditions, “if you go a tiny bit offline, you’re done,” after he ended up going backwards at Quarry, but he fought back to finish second behind Montgomery, Thorne third. 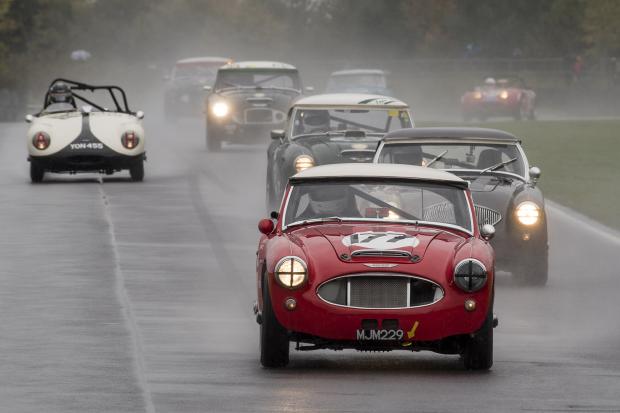 Over 30 cars representing 16 marques lined up for FJHRA/HSCC Historic Formula Junior UK race as the sun started to poke through the clouds.

Peter de la Roche (Lola Mk3) got the better of poleman Richard Bradley (Brabham BT2) to lead at the end of lap one, but Bradley soon regained the advantage and never looked back, winning by 23.5 secs.

FISCAR’s 30-minute Historic Intermarque Race was without Steve Boultbee-Brooks, who’d won this contest for the last three years in his Aston Martin DB3S.

The Robin Ellis/Richard Fores Lotus Elite took pole in the wet, but had to settle for third by the end of the first lap, as Martyn Corfield (Frazer Nash Le Mans Replica) led from Marc Gordon (Jaguar XK150). The Elite was soon back out front, but retired on lap 12 with driveshaft failure. 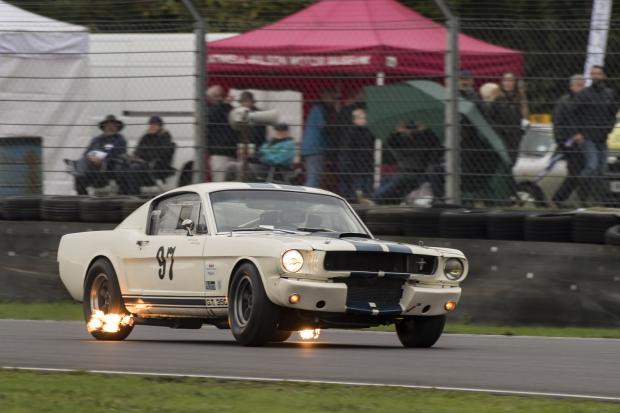 Next, more than 40 cars descended on the grid for the hour-long GT and Sports Car Cup, Gary Pearson taking his E-type into the lead from third on the grid at the rolling start, from Ben Adams (Lola Mk1) and the Niall McFadden/Niall Murray E-type, the Lotus 15 of Philip Walker/Miles Griffiths coming through to second at the end of lap one, but sadly retiring later.

When the Bob Binfield/Sam Binfield Gilbern 1800 GT crashed at Quarry, the safety car was deployed, after which it was Pearson leading from Mark Williams (AC Cobra) and Corfield/Jeremy Welch (Austin-Healey 3000).

A second safety-car period later in the race halved Pearson’s advantage, and when the remaining eight-minute sprint to the flag got under way he was pursued by Williams and John Burton (E-type).

Blakeney-Edwards soon took third in the E-type he was sharing with Martin Hunt and that’s how it stayed, the experienced Pearson winning by 11.2 secs on what was, surprisingly, only his second race at the Wiltshire circuit. 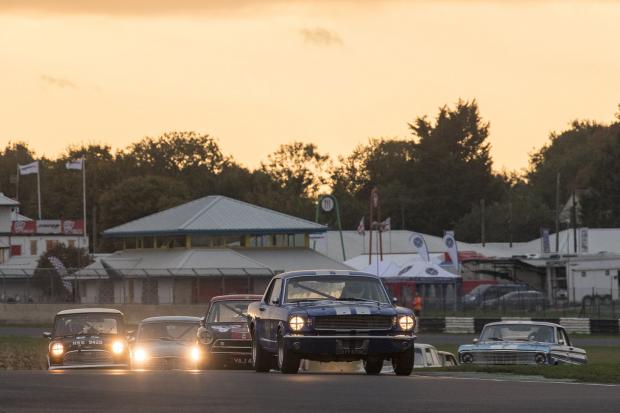 Finally, it was the David and Goliath battle as Minis and Lotus Cortinas took on Ford Mustangs and Falcons in the CCRC Touring Car Challenge for the Terry Sanger Memorial Trophy.

Minis had taken the first four places on the grid in a soaked qualifying, Michael Squire next in his Mustang after spinning on the approach to Camp during that session.

On a now dry track, Squire’s Mustang powered past the Minis off the line and into the lead, burbling and sliding round the track, headlamps ablaze in the fading light. 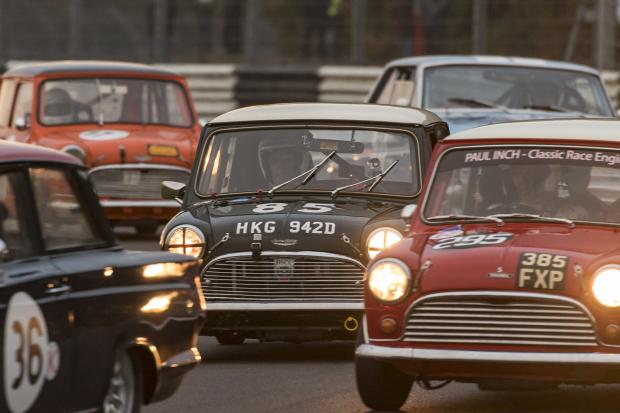 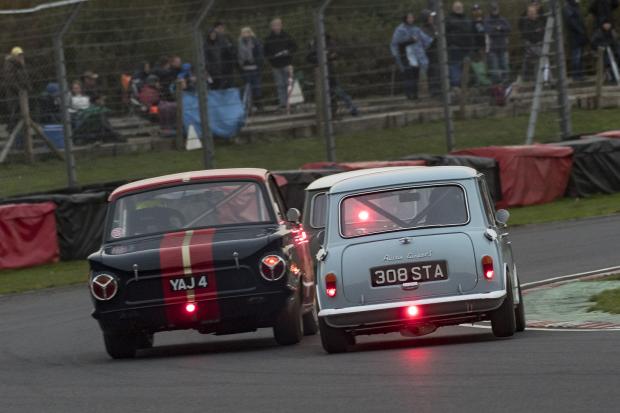 By the end of lap three he had an 11 sec lead, the question being could the now second-placed Falcon of Julian Thomas catch him. It wasn’t to be, Squire dominant, Thomas second.

Paul Inch (Austin Mini Cooper S) held third early on, but slipped to seventh by the line racing in the gaggle of Minis and Lotus Cortinas jostling for position. 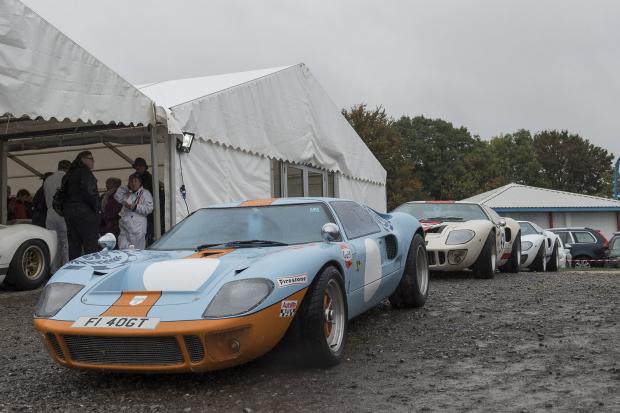 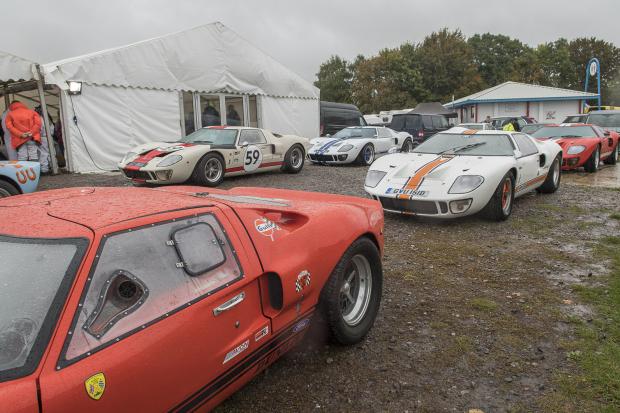 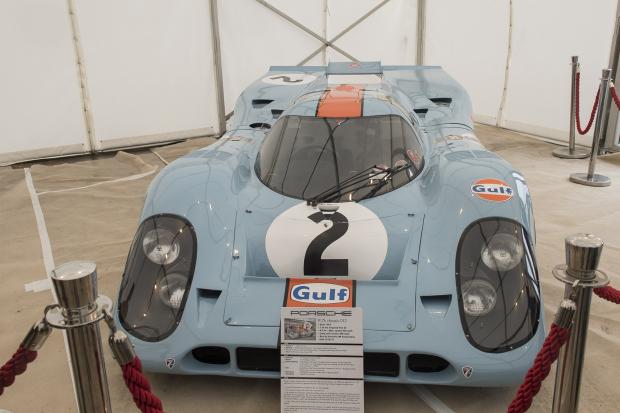 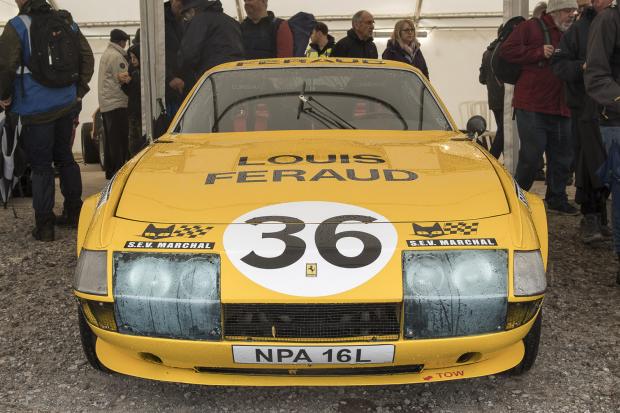 Away from the competitive action, visitors could enjoy the display of GT40s, 50 years after the model won at Le Mans, as well as paying tribute to Castle Combe great Ron Fry, who won all but one of the 13 races he entered at the Wiltshire track in a GT40. 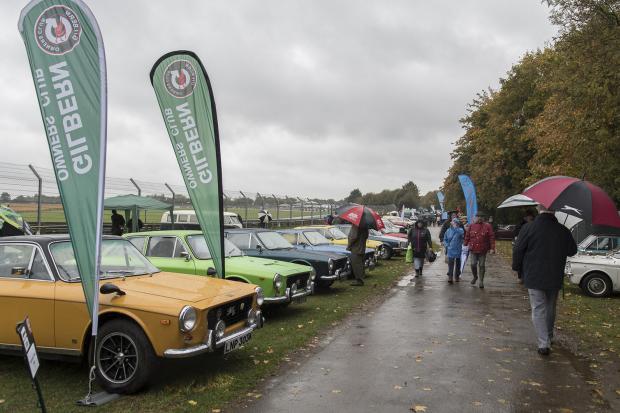 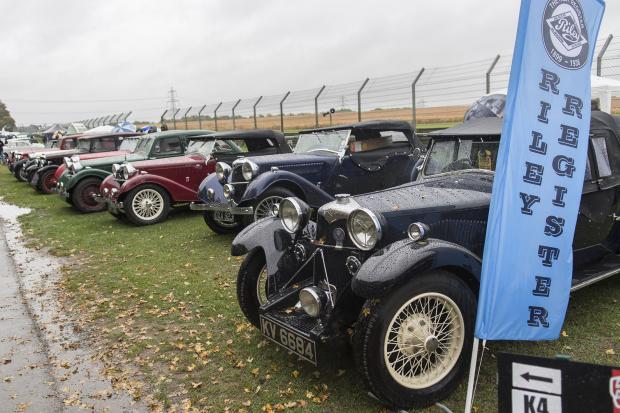 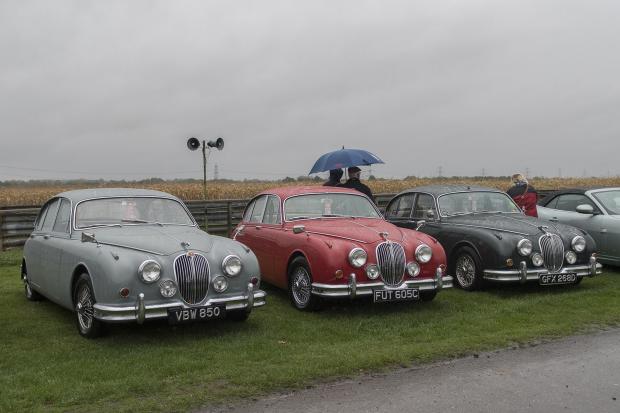 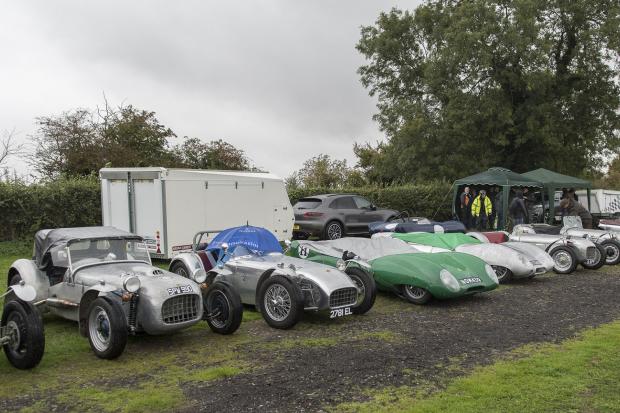 Gilbern, Riley, Jaguar and Lotus were well represented in the club areas

And despite the weather, car clubs were out in force, giving visitors plenty to enjoy. A quartet from both the Alvis Owner Club and the Austin Cambridge Westminster Car Club were fine sights, plus 10 cars each representing the Riley Register and the Gilbern Owners’ Club could be found in Club Avenue.

Meanwhile, over in Club Village there were impressive displays of Jaguars, Bristols, Lotus cars and TRs, to name but a few.

All of which meant that those who braved the elements at this year’s Autumn Classic had plenty to entertain them. 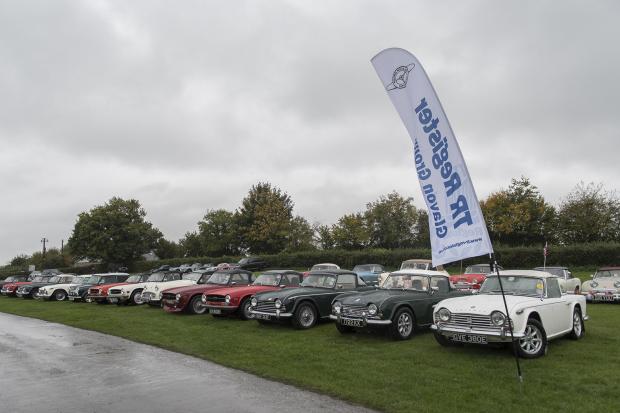 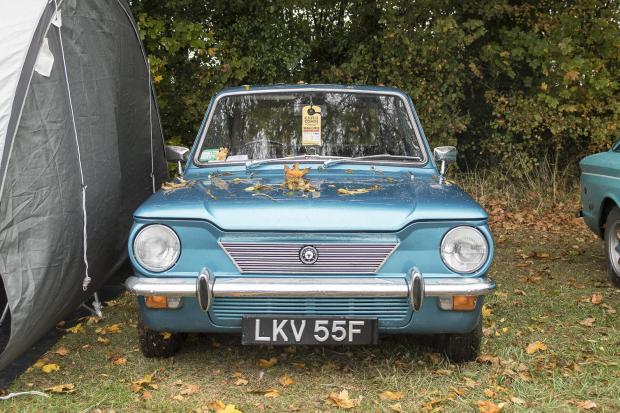 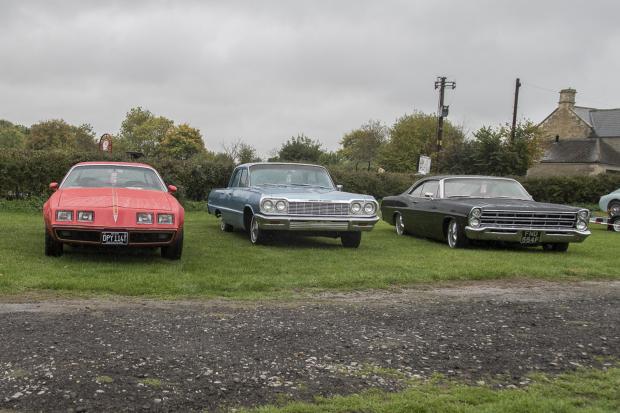 A great display of TRs, while the sweet Singer and US offerings underline the huge variety on show

The problem with collecting cars – and how to do it right

Lotus is searching for its Mark I – and it needs your help!