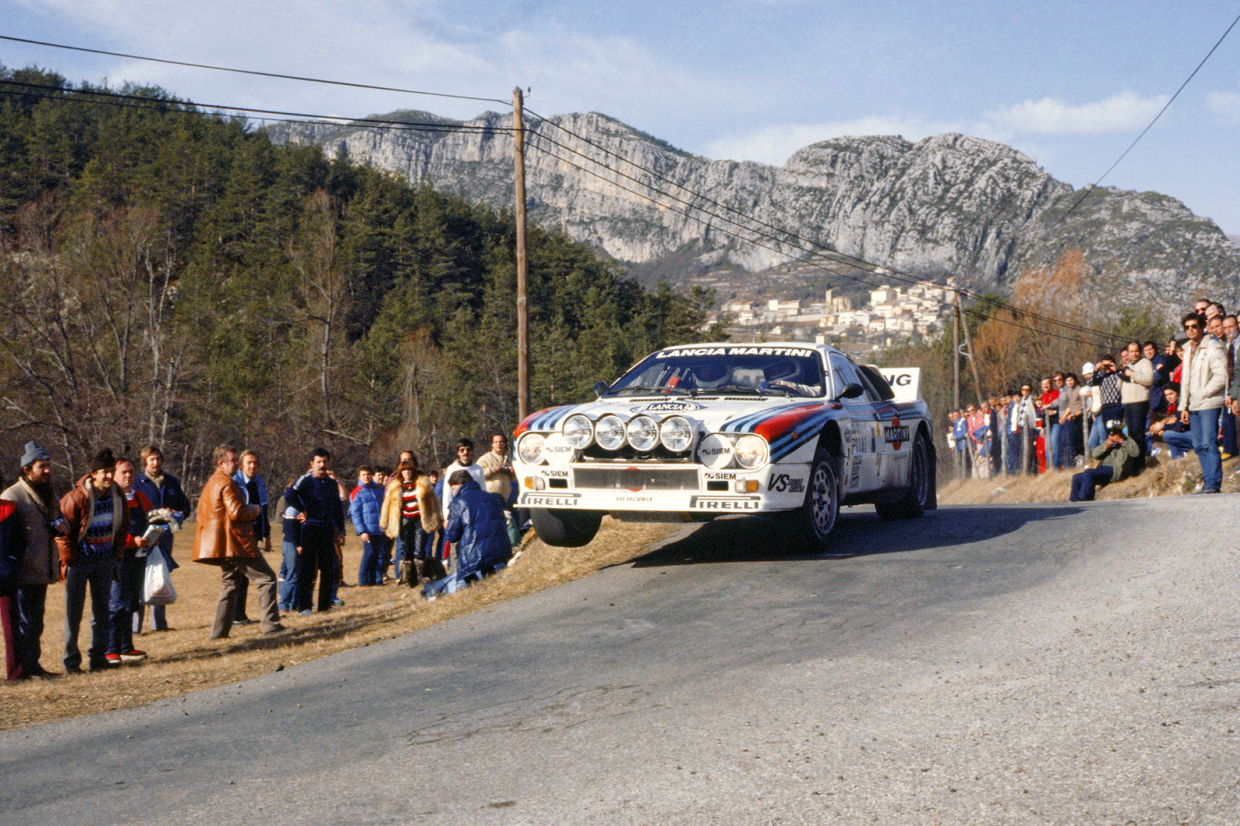 He offers a look of solidarity but it may have been a wince. It’s hard to tell.

A queue is forming, our minder proffering a smile that reads: ‘Let’s wrap this up quickly.’

Markku Alén is straining to be heard over the throng of well-wishers and hero-worshippers wanting to get close to one of rallying’s most charismatic superstars.

It’s as though a seismic disturbance has unsettled the air, but then we are in the middle of the Caramulo Motorfestival.

The Finn famously won the Portuguese Rally five times, a feat not lost on the 40,000 spectators carrying national flags, models, photos and hats for him to sign. This is no longer an interview, more a case of him being shelled with questions posed at larynx-shredding volume. 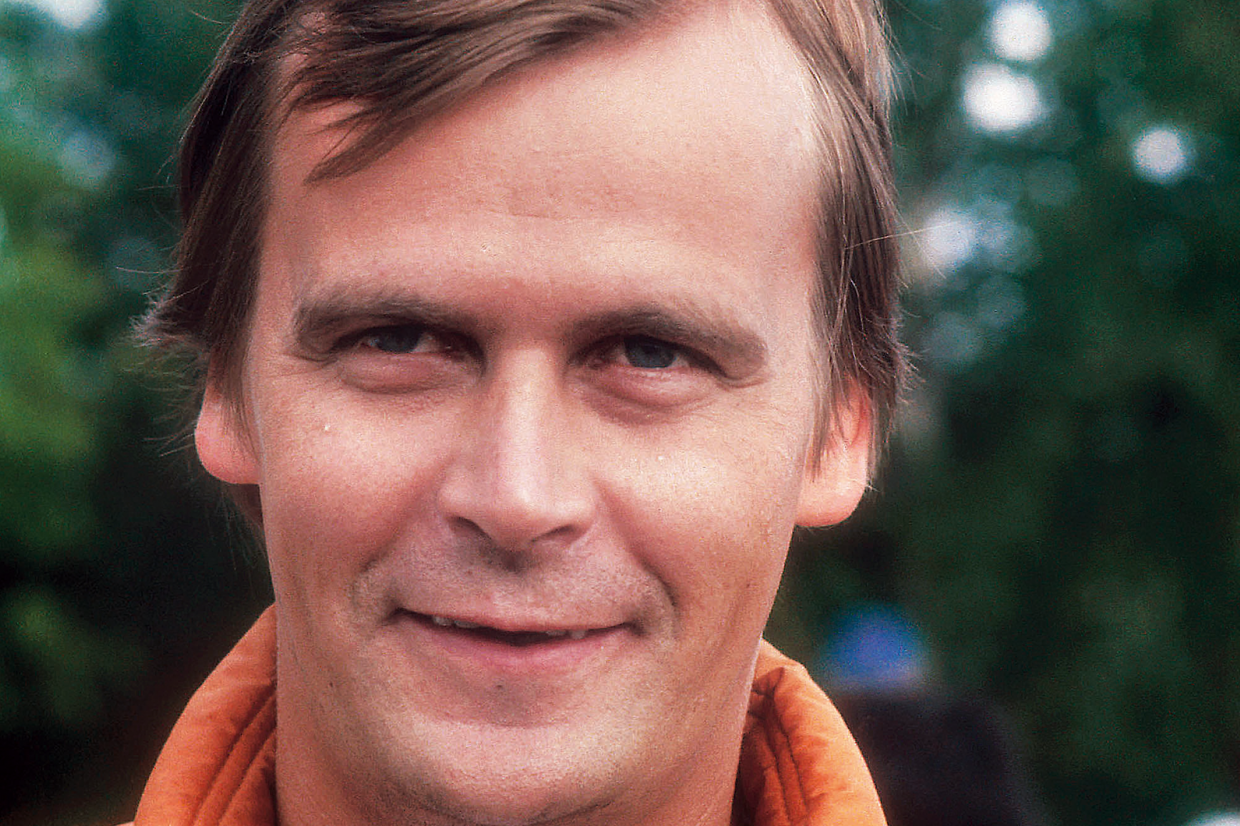 Fast-forward a few hours and we’re at a reception in an art museum, and able to finish what we started. Our hero appears relaxed, if a little tired.

“I love it here. I always went well in Portugal,” he says. “I did the rally 15 times and only retired once. There were certain rallies on which I always did well, but also some – such as Monte-Carlo – that, for whatever reason, I didn’t seem able to win. I finished on every step of the podium apart from the one that matters.”

Alén was, for two decades, the most exciting man to watch in the World Rally Championship. His personality drove him, inexorably, to take up the fight more fiercely than anyone else.

At least, that’s how it appeared from the outside.

During broadcasts of the RAC Rally of Great Britain, each time a microphone was shoved in his face at a rest halt, he was invariably asked what his plans were for the next stage.

Just as night follows day, he would tender an unblinking death stare before uttering: “Now we go maximum attack!” And he did. 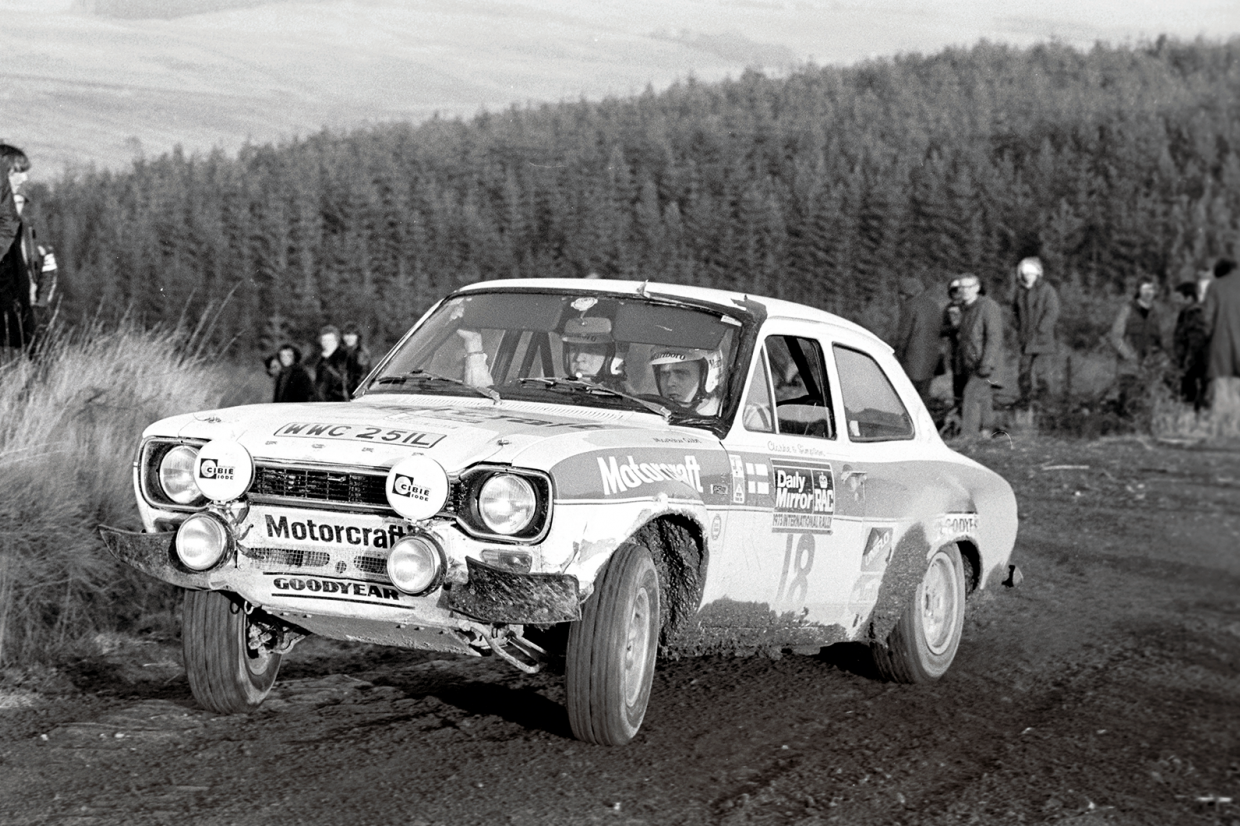 Alén never claimed the World Championship for Drivers, but he held the crown for 11 days in 1986 before it was controversially taken away from him.

Nevertheless, he won 19 rounds of the WRC from 129 starts, and secured the 1978 FIA Cup for Drivers, the precursor to the World Championship.

Given that his father was a champion ice racer it is not surprising that Alén became a wheelman, but he claims that this didn’t influence his decision to take up motorsport.

“My heroes growing up were Timo Mäkinen, Pauli Toivonen and Hannu Mikkola,” he explains. “They were the original ‘Flying Finns’. When I was 16 years old, I watched the 1000 Lakes as a spectator. That was in 1967. I watched these guys and knew then that I wanted to drive rally cars.

“I had done some karting, and some things with motorcycles, but this excited me more. As soon as I got my driving licence I was out there competing. My first event was the Hankrally [Snow Rally]. I finished second.

“When I was 18, I won the 1969 Finnish Junior Cup and the following year I was competing on the same events as the stars I looked up to. It was pretty amazing. It all happened very quickly.” 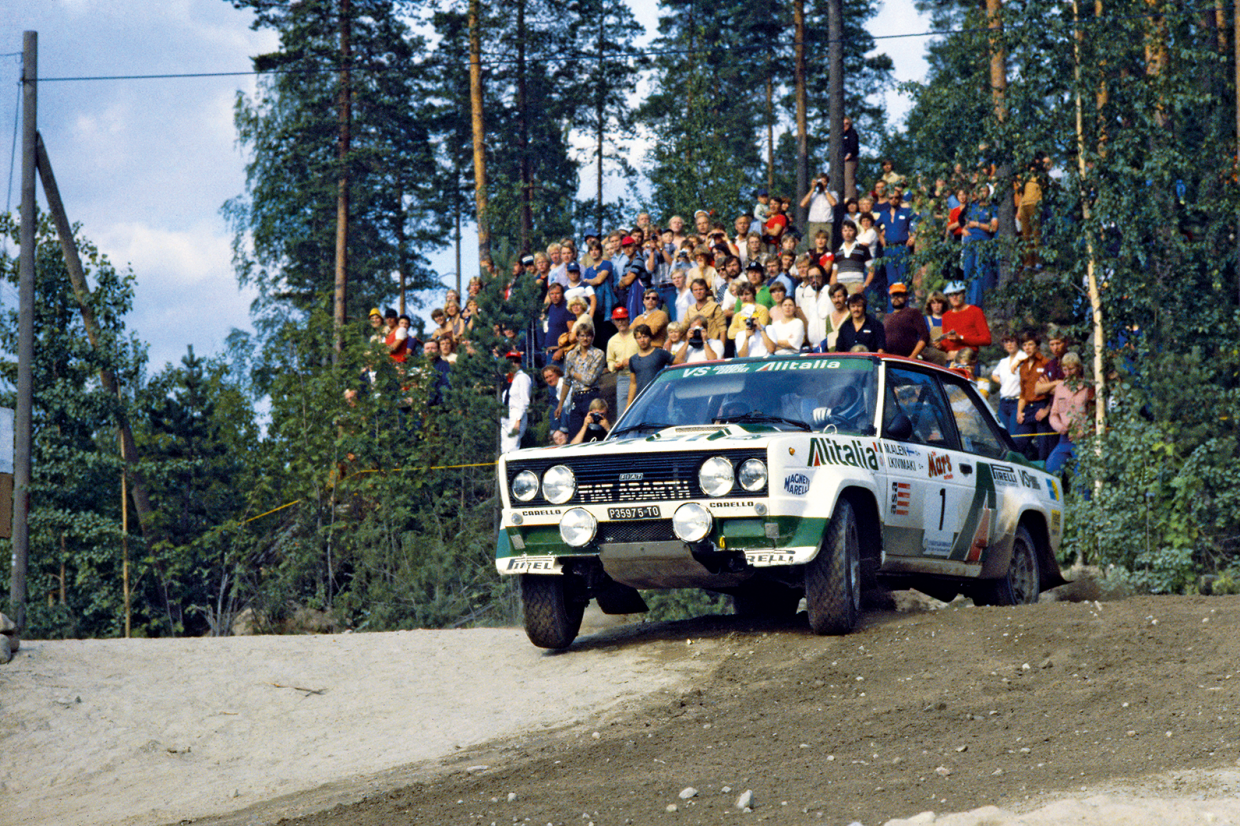 All eyes on Alén as he heads for the top step at home in 1979, his third win in four years. He’d follow it with a fourth a year later – all in Fiat’s purpose-built 131

Having started out in a Renault 8 Gordini, it was aboard a Sunbeam 900 (Imp) that Alén made an impression.

His hero, 1968 European Rally Champion Toivonen, was instrumental in him making the leap from amateur to professional: “I bought the Sunbeam from him and he took an interest in me. He was a hard guy, you know? He was tough, and I learned a lot.”

Following an impressive outing in a borrowed Group 1 Opel Kadett on the 1970 1000 Lakes, which ended with the biggest accident of his career, he bagged a drive with the Finnish Volvo concessionaire under the Marlboro Racing Team Finland banner.

However, it was in 1973 that he rocketed into the spotlight. He had driven a David Sutton-fielded, Clarke & Simpson-livered Ford Escort on that year’s Lindisfarne Rally, but for the RAC Rally of Great Britain he was armed with a Motorcraft RS1600. 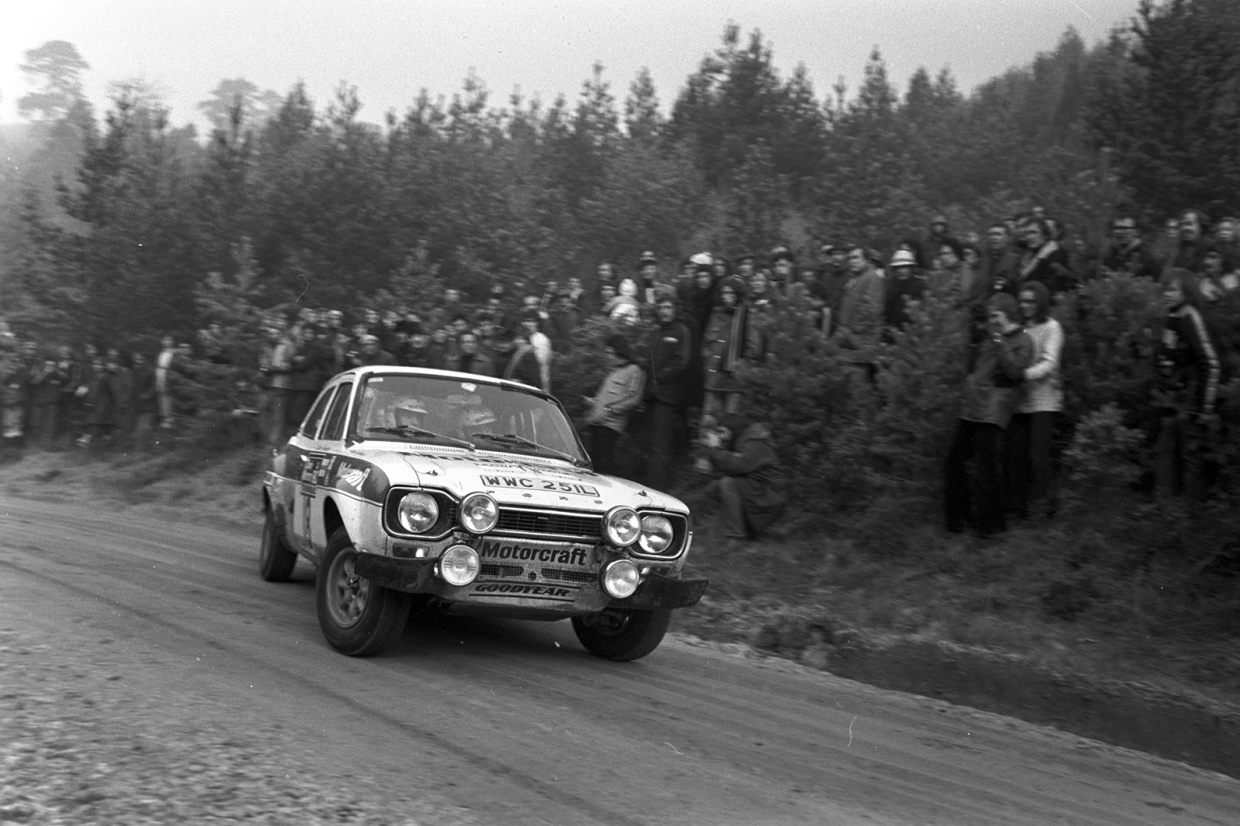 Alén/Kivimäki on the 1973 RAC Rally of Great Britain

His appearance has long-since entered into legend. Leaving the road in Sutton Park on the opening day, he and wingman Ilkka Kivimäki dropped to 177th place.

Cue an epic comeback drive: “We went off at a very fast part of the stage; the same corner where Mikkola had crashed. A lot of people left the road there. We were in fifth gear, really going fast, and then we went head over heels into the trees. The car looked bad, but the spectators were able to help push it towards the road.

“Then Tony Fall went off at the same spot and ended up where our car had been moments earlier. They then had to move his car for safety reasons so we lost a lot of time before we were able to get going again. We were fastest on the next stage, though.”

Despite another ‘moment’ on the final day, the youthful duo came home third. 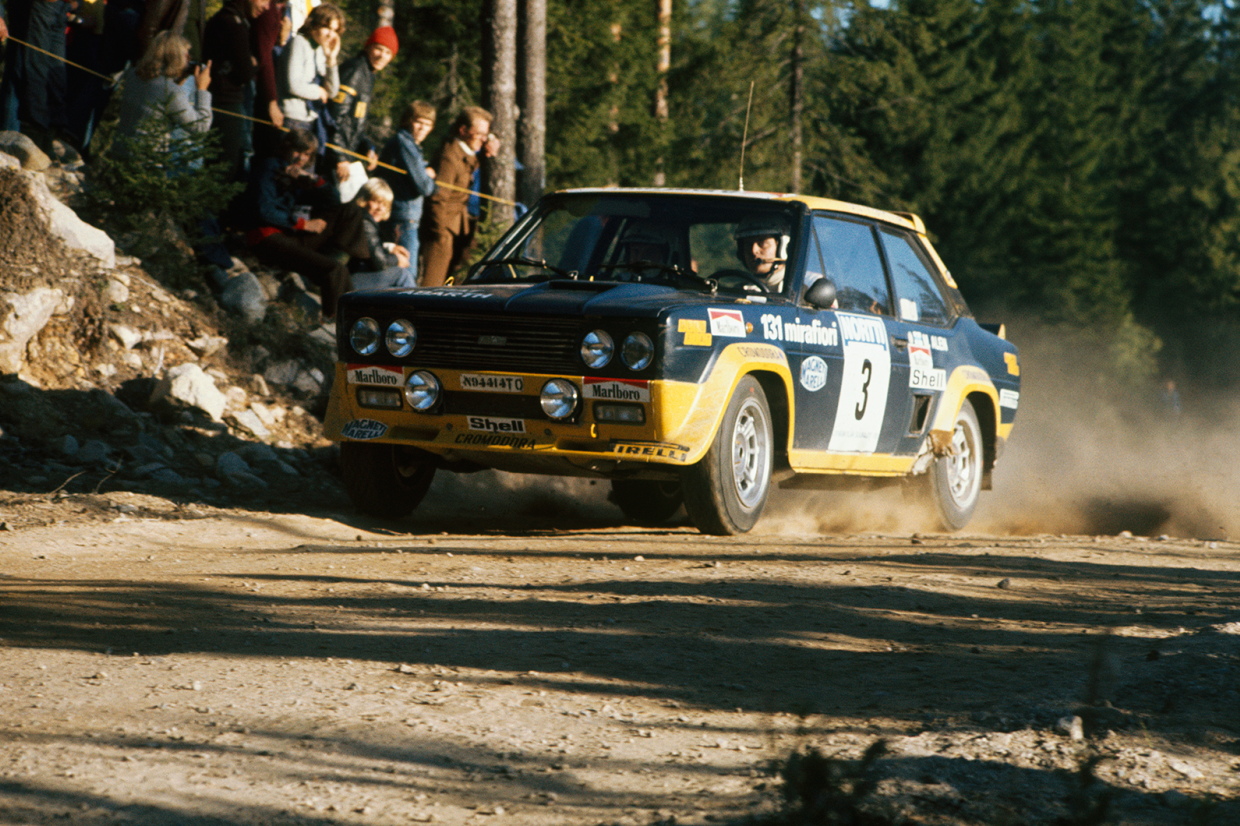 The 22-year-old Alén was subsequently inundated with offers of factory drives, and in 1974 he was a works man for Ford and Fiat.

“I think I was the only driver to be with two teams, but ultimately I had to make a choice,” he recalls. “My deal with Ford was only for a part-season, but Fiat wanted me to do more and more events.

“The Escort was a fantastic car, but the works team already had the Finnish mafia [Mäkinen, Mikkola et al] and Roger Clark so I decided to go with Fiat.” Pause for dramatic effect. Smile. “Of course, it helped that they offered me more money!”

Strong results came in thick and fast, and Alén claimed his maiden WRC win in Portugal in ’75 at the wheel of a Fiat 124 Abarth Rallye.

A year later he was piloting a 131 Abarth: “That was so much better than the 124, which was a road car altered for rallying. The 131 was the opposite. I worked closely with [development driver] Giorgio Pianta on the car and we did a lot of testing in the run up to each rally. Preparation was fantastic. 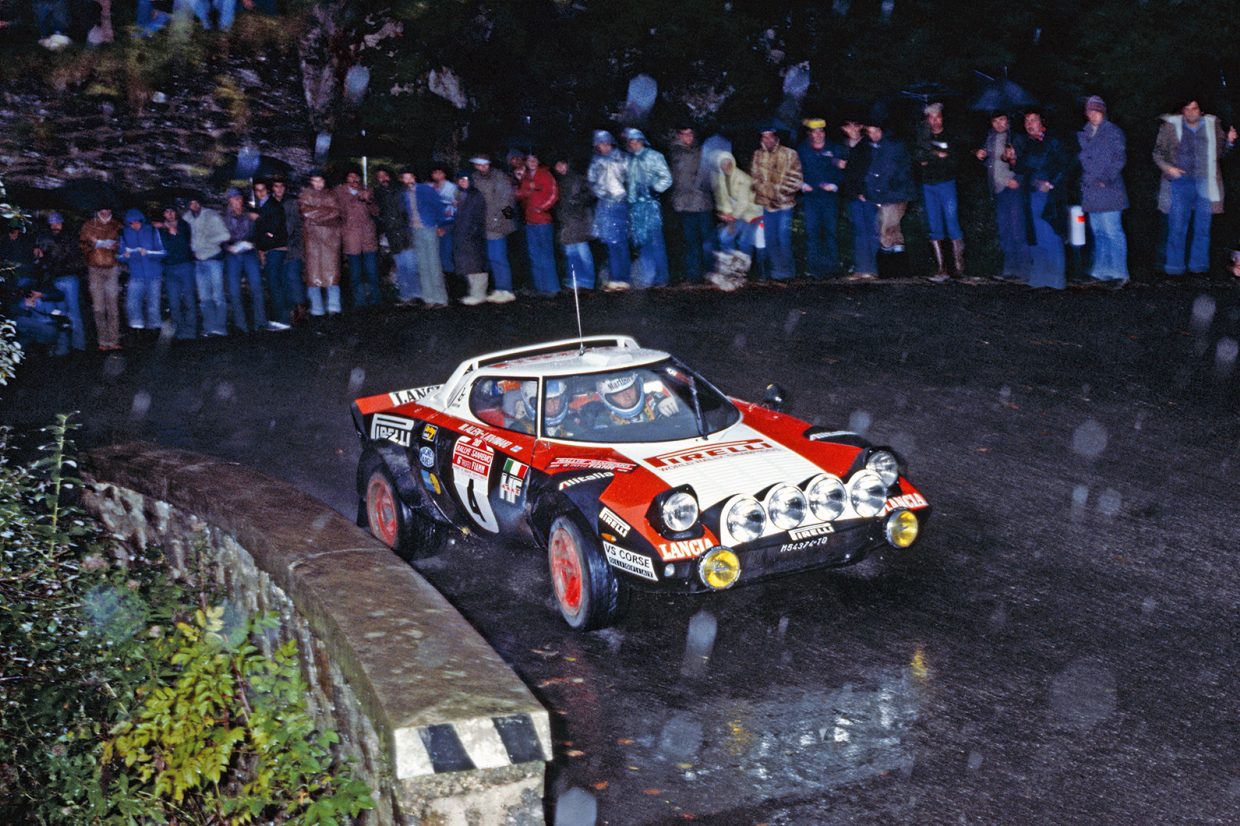 The Finn scored two victories in a Lancia Stratos, including here at Rallye Sanremo in 1979

Dovetailing his 1978 outings in the 131 and a Lancia Stratos HF to take the FIA title, his wins included the Giro d’Italia automobilistico in the Dino-engined supercar.

“I had driven against the Stratos many times, so it was great to finally do some events in one. I couldn’t believe how easy it was, although I was too tall – I was always hitting my head on the roof.”

Further seasons would feature him jumping between Fiat 131s and Lancias, before the newly combined operation under parent company Fiat handed him a fresh weapon: the Lancia 037.

Having blooded the supercharged Group B machine on the non-WRC Rally Costa Smeralda in ’82, the following three campaigns would see him put in emphatic performances as he fought Audi quattros and then Peugeot 205 T16s. 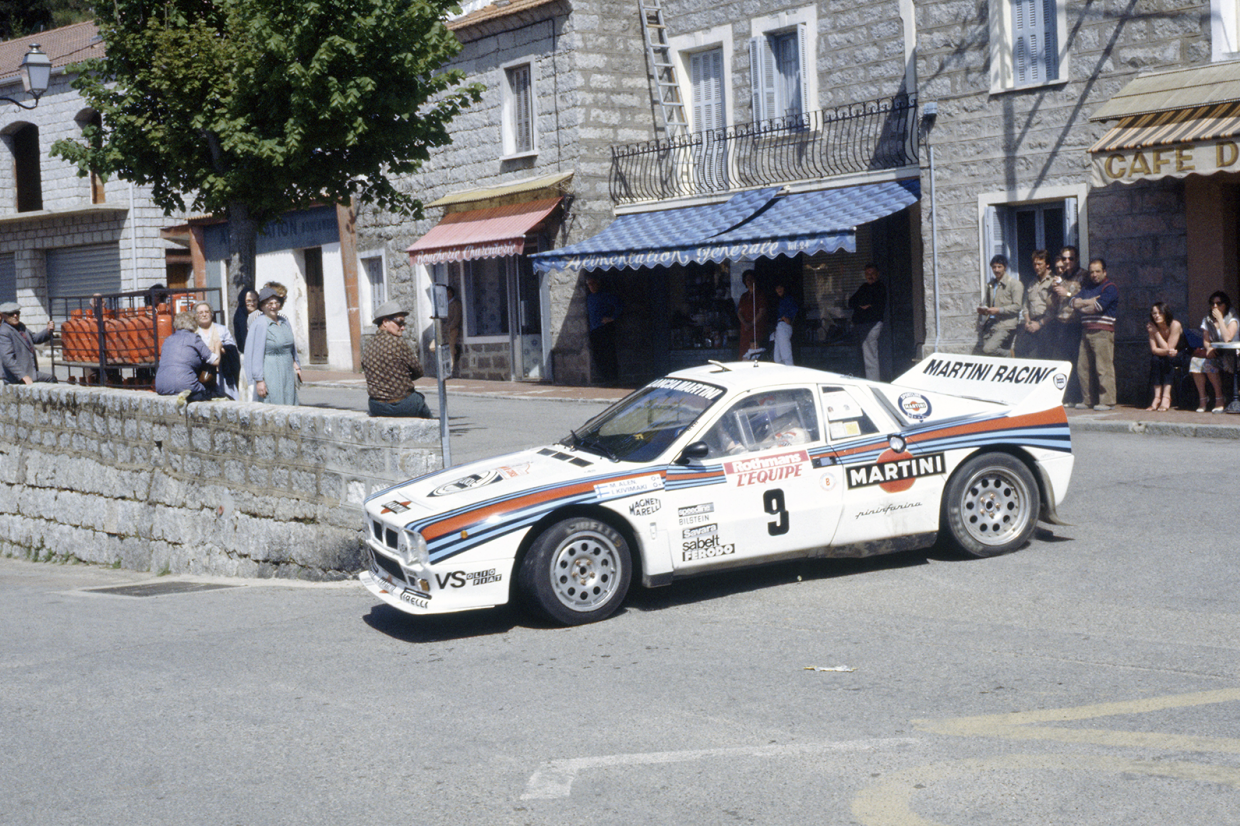 “I am not sure if it was the best car I ever drove, but it was my favourite,” he admits. “It was also the only one I never rolled… I loved the 037, but not having four-wheel drive cost us on gravel.

“The Delta S4 that came next was a very different type of car. Of course, we now had four-wheel drive and a lot more horsepower, but I wouldn’t say I enjoyed driving it as much as the 037.

“We did our first rally in that car at the end of 1985 [he was second to teammate Henri Toivonen on the RAC Rally of Great Britain]: I knew we had a car to fight Peugeot.” 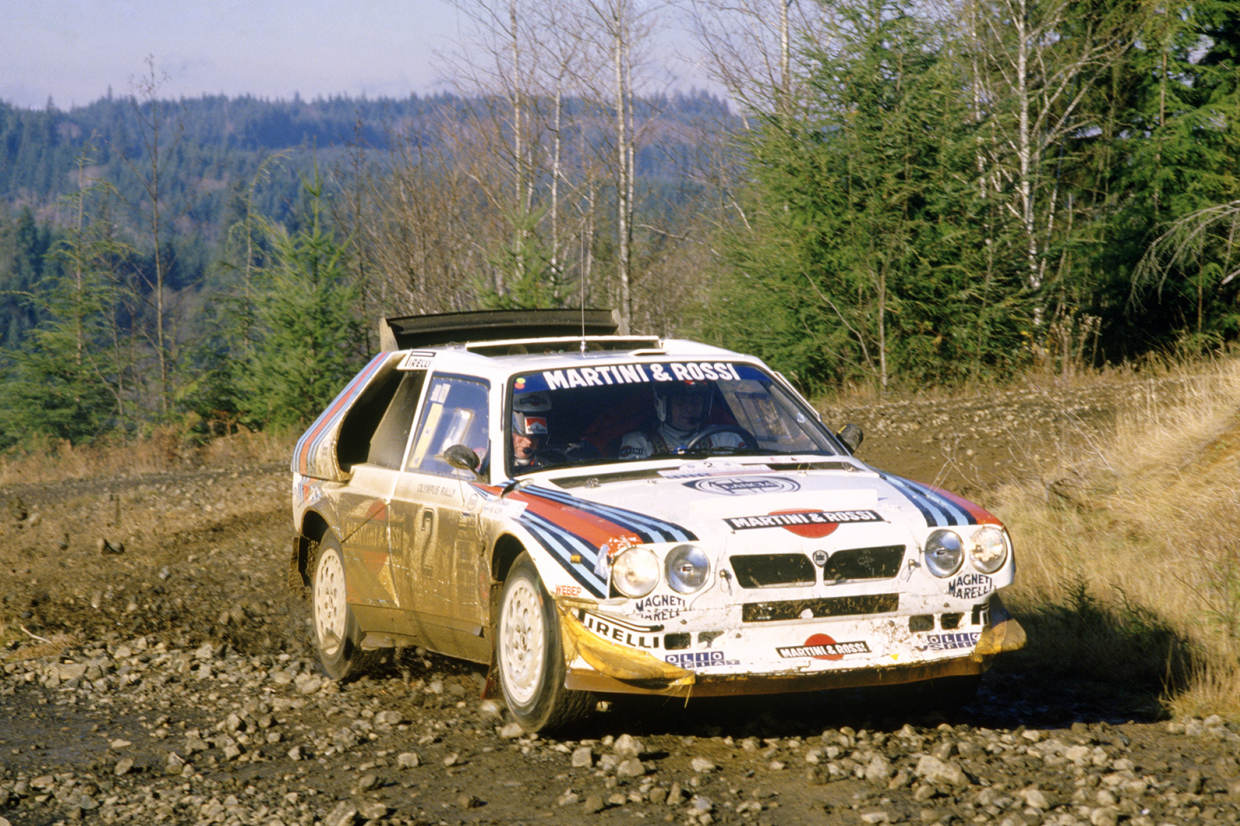 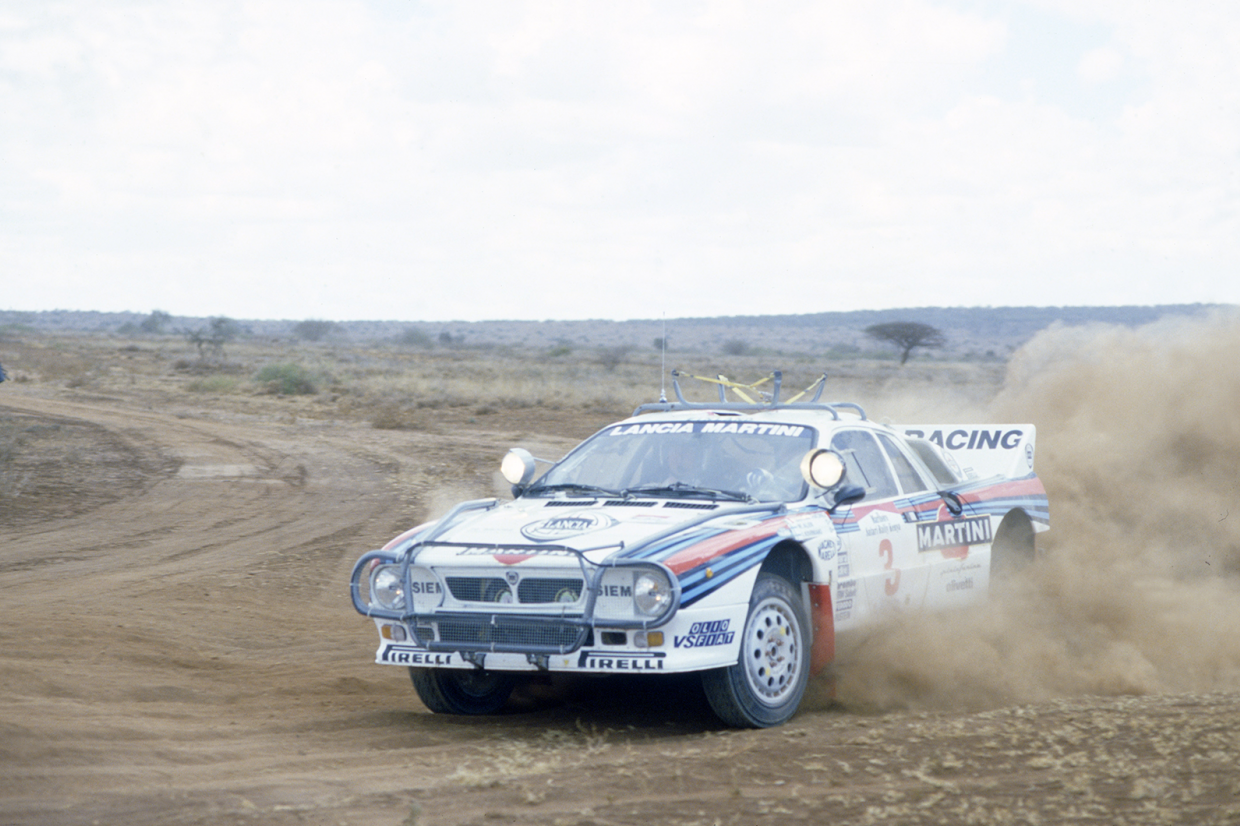 In 1986, Alén/Kivimäki claimed victory on the Olympus Rally (left) and third on the Safari Rally

During the first half of his campaign he had little to show for his efforts, save second place in Sweden.

In Portugal there had been a driver revolt over crowd safety, while in Corsica his car was withdrawn following the deaths of Toivonen and his co-driver Sergio Cresto.

Thanks to retirements on the Monte and in Greece, it didn’t appear as though he had a shot at the WRC title.

Results improved, however, and having contested each round he arrived for the Sanremo just 22 points behind Peugeot rival Juha Kankkunen, with 20 points on offer for victory.

With only Sanremo’s final Tarmac leg left to run, the three 205 T16s were controversially excluded. Chief scrutineer Lanfranco Caneschi considered the cars’ protective undertrays to be illegal; that they were actually in place to provide extra downforce. Given that even Lancia team boss Cesare Fioro opined that they weren’t, Alén’s victory was devoid of glory. 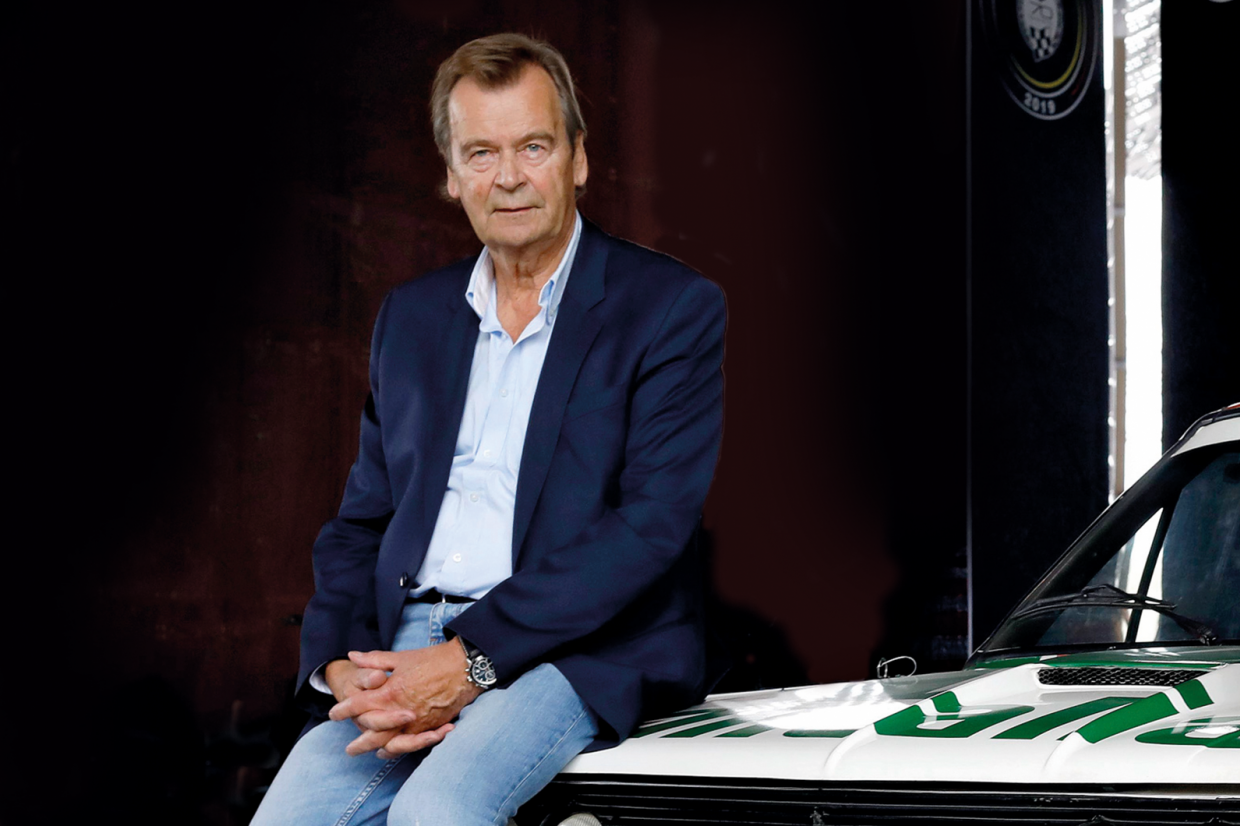 He then placed second in Britain and won the Olympus and the drivers’ title. But the subsequent annulment of the Sanremo results following a successful protest by Peugeot Talbot Sport crowned Kankkunen instead.

“I still don’t know the full story of what happened,” admits Alén. “I don’t know if politics came into it, but I never understood why the Sanremo people didn’t let the Peugeots complete the rally and then throw them out.

“It made no sense to drop them so late in the rally. By not letting them finish, and with the Peugeot team’s protest then being successful, they couldn’t simply reinstate them in the results. If they had, I might have finished second to Juha and perhaps still have won the title.

“Who knows? It was handled very badly. I have no problem with Juha, but it isn’t a happy subject for me.” 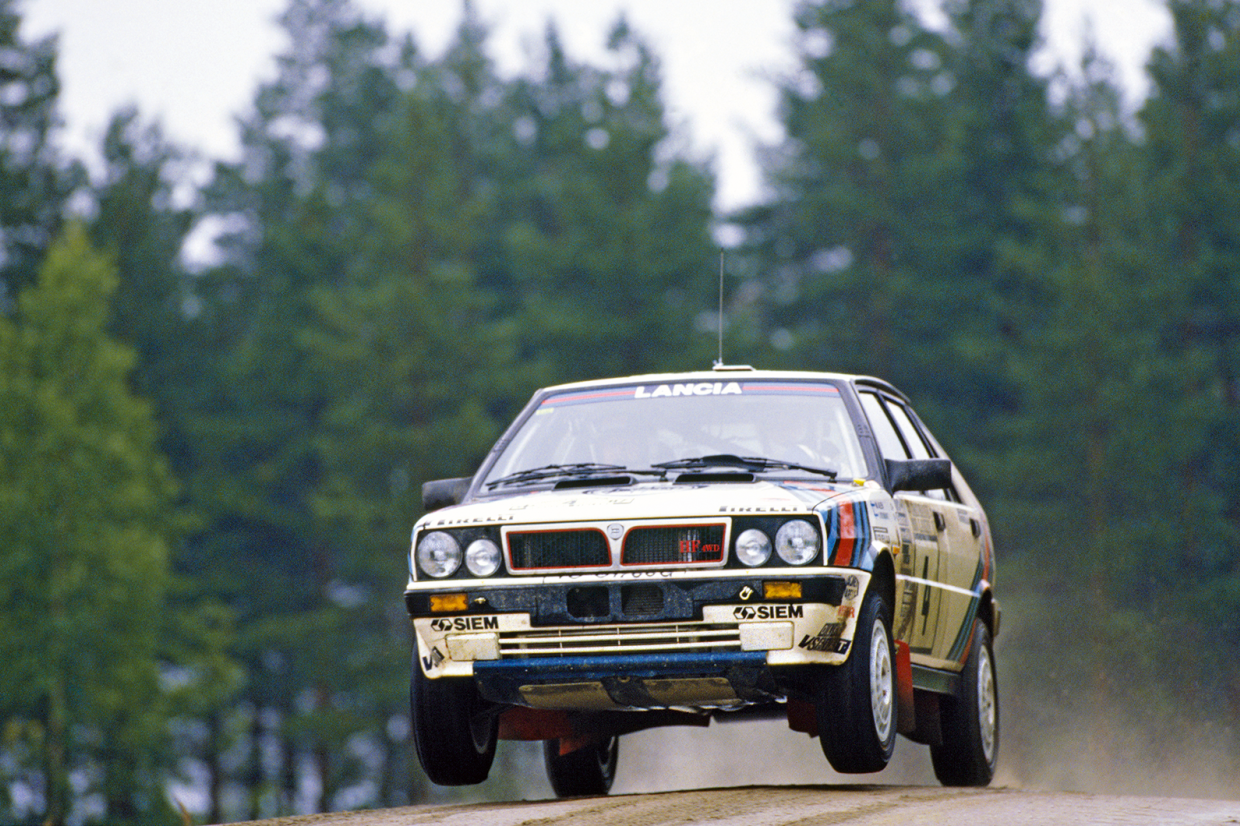 Group B was abruptly axed at the end of 1986 because of safety concerns, with Group A becoming the top-flight class for ’87. Alén isn’t convinced this was the right approach.

“I loved the Group B cars. I liked having the power. It meant the driver made the difference. In Group A, you had only 300bhp and it was boring,” he adds, mimicking driving with one finger.

Nevertheless, Alén won at the helm of the Martini-liveried Delta 4WD and Integrale – and more than once, claiming his last WRC victory on the 1988 RAC Rally of Great Britain.

A partial season in 1989 followed by drives with Subaru and Toyota rounded out his frontline career, although he continued to rock up in everything from the DTM in a semi-works Alfa Romeo 155 to the Andros Trophy ice-racing series, via driving big rigs on the Dakar Rally.

More recently, he has helped hone several Ferrari production cars as a development driver, while also fronting a TV show in his homeland where he pushes vowel-laden exotics to their limits. 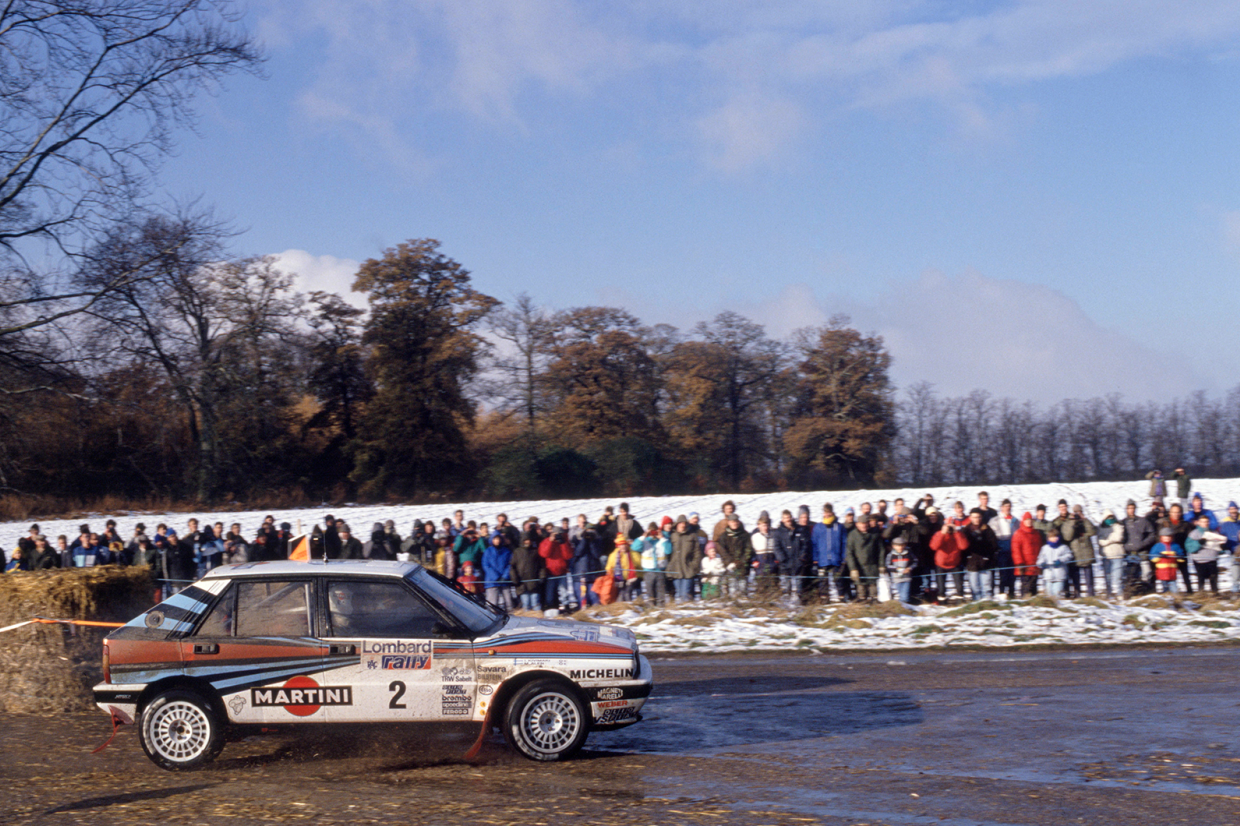 By way of a parting shot, a clumsily asked question is met with a look of incredulity. That, and laughter: “Was I ever scared in a car? No. Well, not when I was driving.” Pause.

“I was never scared in a rally, but perhaps in a race. I remember being uncomfortable when I did Le Mans in a Lancia Beta Montecarlo Turbo in 1980. I didn’t feel at home. Going down the Mulsanne Straight flat-out, I thought, ‘What am I doing here?’ That’s the only time.”

And with that, the curtain descends on the interview, but not before he acquiesces to one final request.

Please say it. Go on, you know you want to.

Thanks to Sara Bravo and Alexandre Amorim